Article Gallery
This 42-Year Old Rogers Is One Bad Lower River Ride and with a Name Like That, You Bettter Be Able to Back It Up.


Some of the Colorado River's best and busiest hot boating takes place between Laughlin at the north and Blythe to the south. And if it wasn't for a couple of dams in the way, it would an incredible unobstructed run of more than one hundred miles from top to bottom.

What is unique, however, is river diversity. Some parts are deep water, and even a lake, where virtually any kind of prop boat has no fear, but other sections are tricky shallow, especially when the water flow is low. This is why so many jet boats claim places like Needles, Big River and Lost Lake as their private stalking ground. 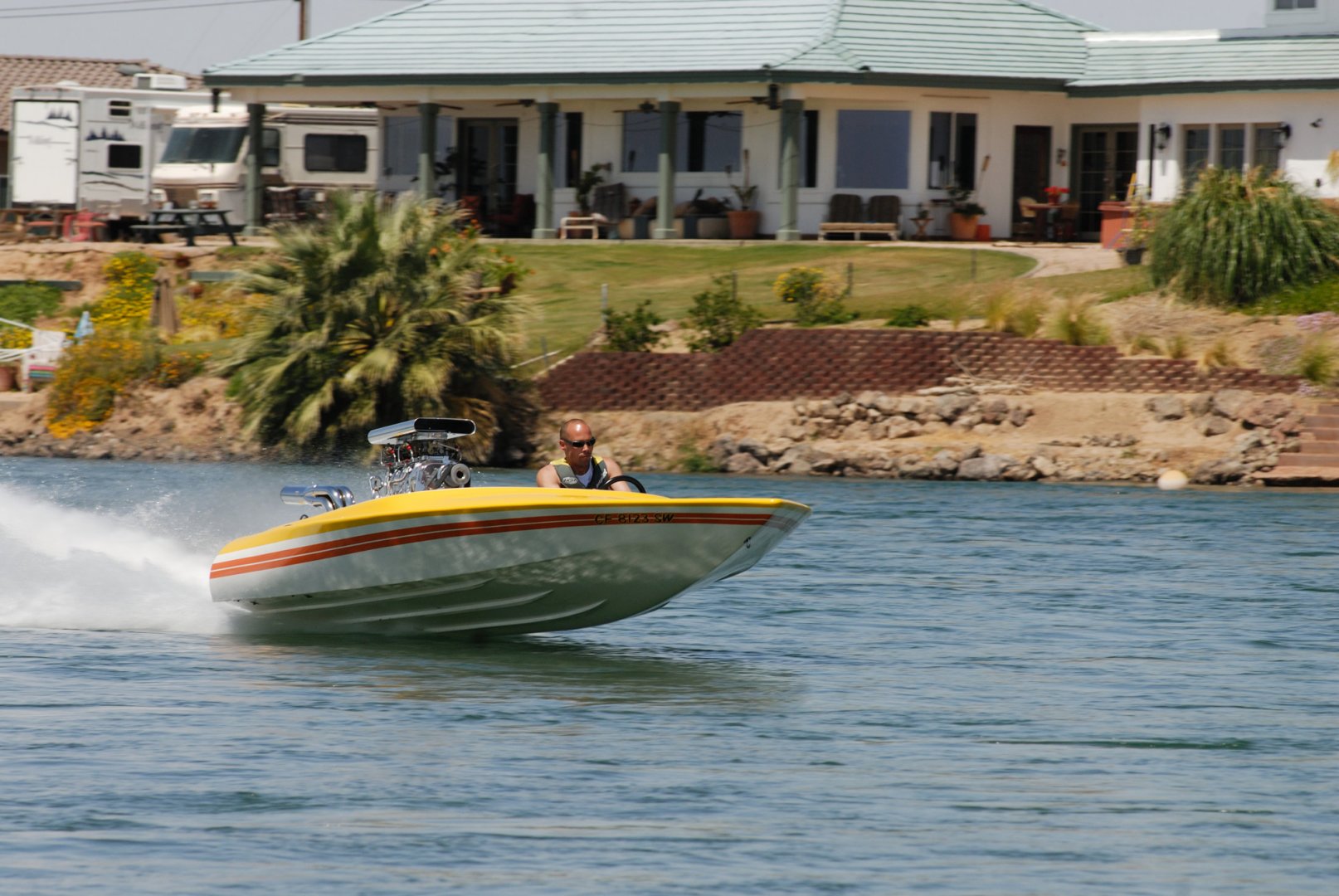 One of the baddest rockets lurking just south of Parker in the Big River area is a rare1978 Rogers Bonneville owned by Bryan McLaren. And it better be bad with a name like "2 Quick 4 U."

Bryan comes from a boating family that's been indoctrinated in Rogers jet boats since 1973 when his dad, Mike, bought a Super Cyclone. His cousin, Kevin McCurdy, got another Rogers Super Cyclone (a 1972 model) about twenty years ago and Bryan went Rogers in 1999 when he purchased a former drag race 18 Bonneville (1978 model year) from NJBA (National Jet Boat Association) notable, Don Lake. 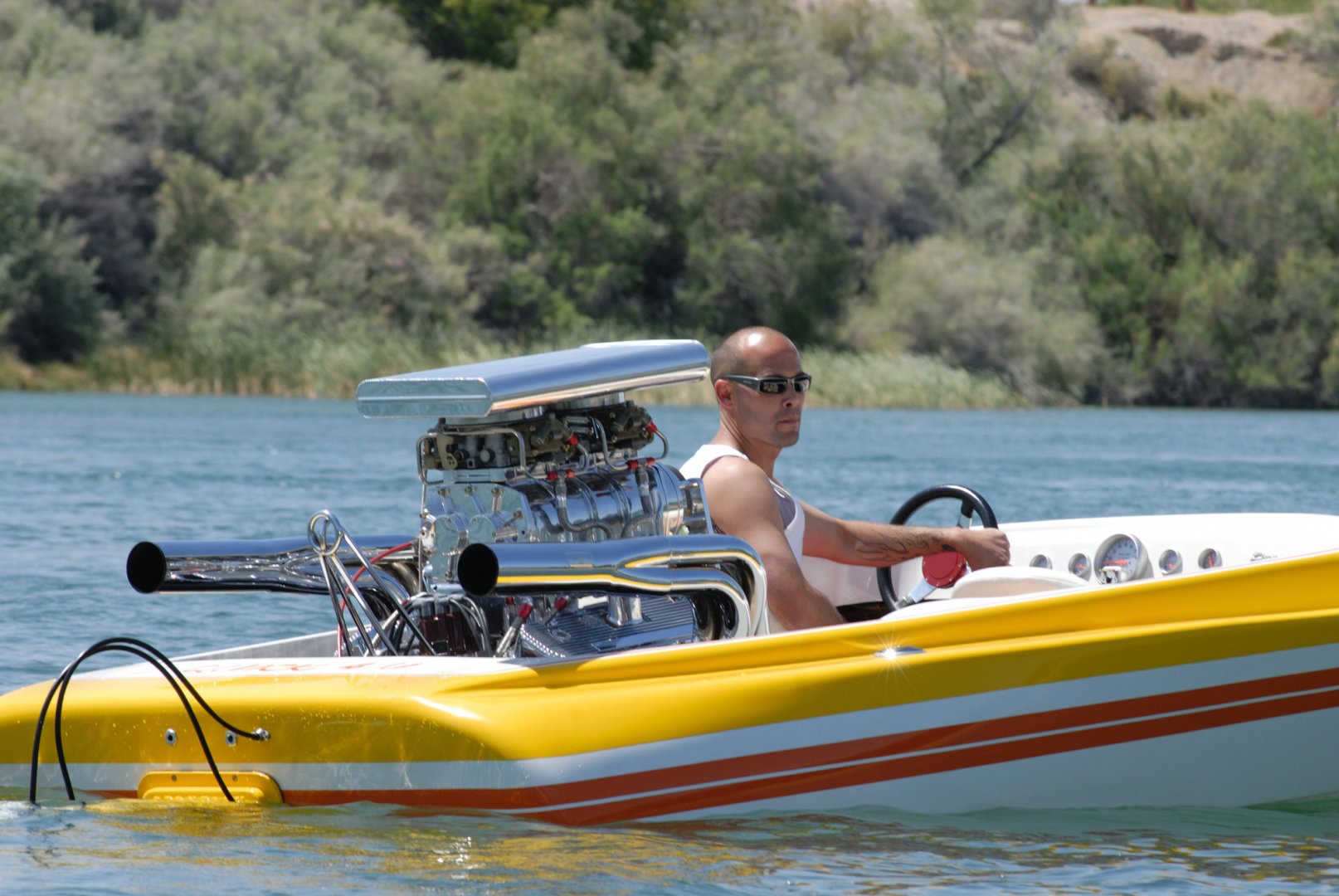 "We just really love the Rogers brand," says Bryan. "Roger Weiman made a great boat with great styling and performance. They've become legitimate classic jet boats and perfect for the river where we do most of our boating."

In January 2009, after ten years of ownership, Bryan decided it was time to give his very lightweight Bonneville a facelift. "The boat still looked good, but it just seemed like a good time to step-it-up a bit and get it back to where it was when it was a winning drag boat. When Don Lake had the boat, it was a class NJBA high point winner several times in the 100 -105 mph class. I got to really know the boat well when I started helping Don at the races as part of his crew in the early '90s." 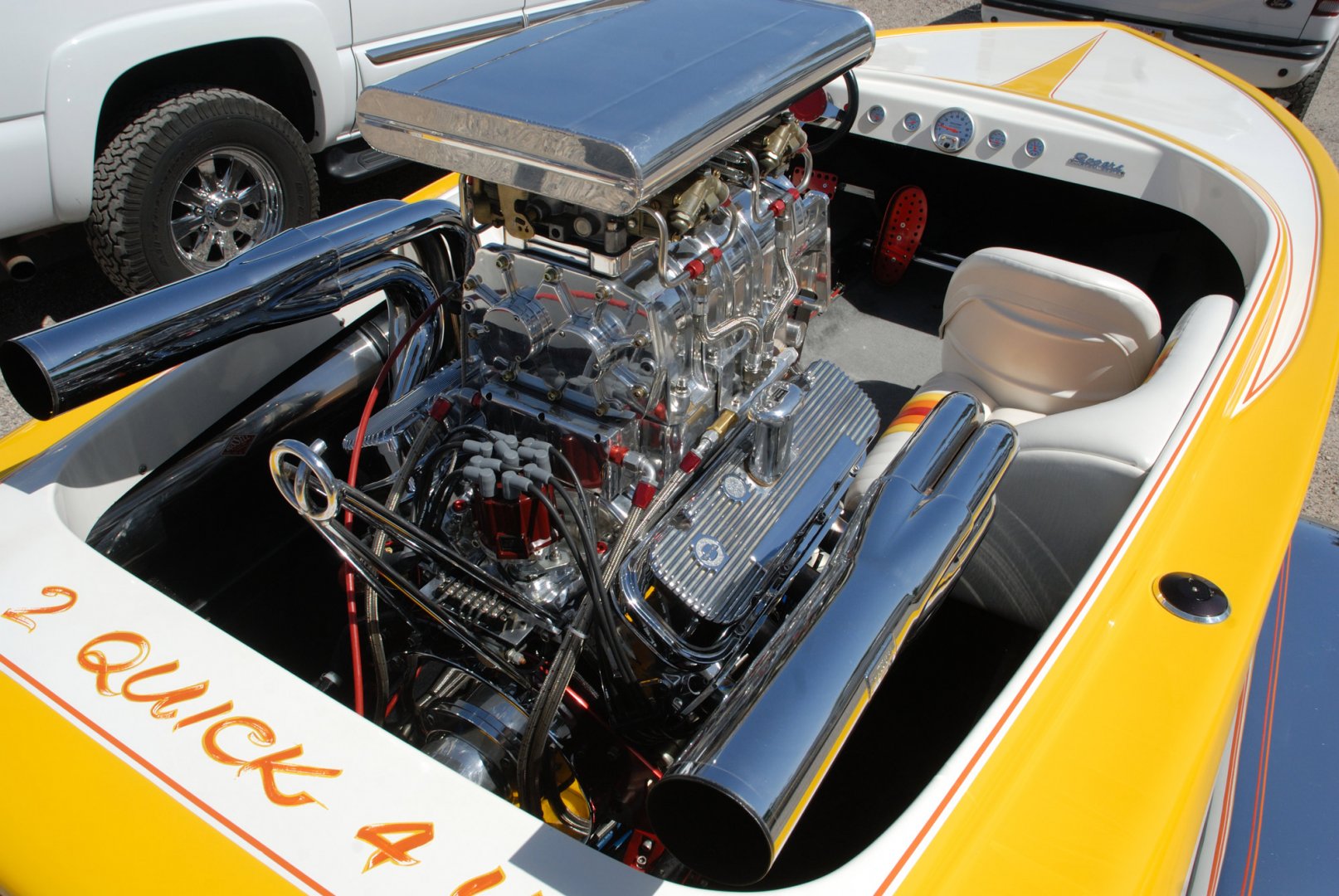 As is so often the case, once you get started on an upgrade project, things just seem to snowball. "My original thinking was just redo the interior and pump, up the horsepower a little," comments Bryan. "But once we got going, one thing just kind of lead to another."

Obviously, the McLarens are pretty good at recycling. The motor that's now in Bryan's Bonneville is the same 454 Chevy (with .060" overbore/now 468 c.i.) block that came out of his dad's '73 Rogers. "My dad did about 80 percent of the engine rebuild, and I did the rest," says Bryan. "Back in the day, dad got to be good friends with Norm Grimes who was really into jet boats and drag racing. Norm also knew a lot about building engines. Dad just kind of picked up a lot of knowledge from Norm and has been doing his own engine work for about thirty years in the garage at home."

What Bryan was looking for in an engine was something that would still run on easily accessible and more affordable 91 octane pump gas, but maybe have enough going for it that he could compete in an NJBA River Racer or a bracket class in the future. His main goal, however, was to have something that would put him at the top of the hot boat heap down in the Big River section of the Colorado River where he and family members have vacation trailers at the Wheel-R-In RV park. Since Bryan is married and has a family, he also plans to fun boat when time permits hence the need for a civilized interior that accommodates more than just a driver. The upholstery is all new, thanks to Douglas Upholstery in Newbury Park, and don't worry about passengers in those rear seats, a blower guard to cover the pulleys and belt is currently in the fabrication stage and will be installed before summer. 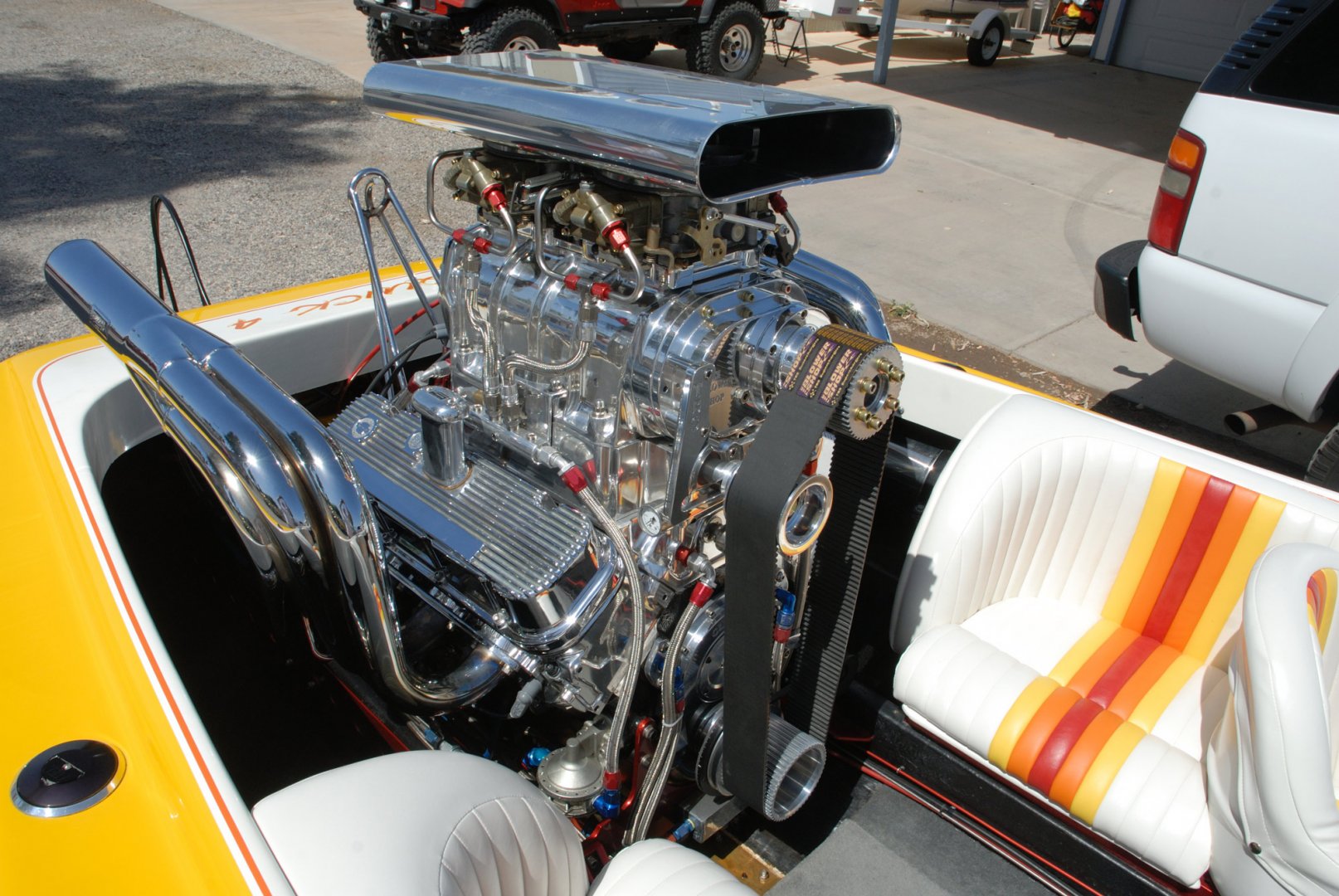 Bryan estimates that the neatly appointed big block Chevy puts out in the neighborhood of 700 horsepower at 6,000 rpm which is where he normally redlines the engine spinning a cut stainless steel "B" impeller. Top speed is just over the century mark. The 4-bolt main engine has a forged GM crank with Chevy 7/16 connecting rods and a 10-quart Moroso oil pan. The camshaft of choice is a Crower solid roller with Comp valve train components. The supercharger is a 6-71 from The Blower Shop sitting on top of a Super Chiller intercooler from Teague Custom Marine. The blower is geared to produce about 6 pounds of boost. Feeding those 468 cubic inches are a pair of 1050 cfm Holleys with a not-so-easy-to-get Dan Olson intake scoop. "I really wanted one of those 1970's style carb scoops," said Bryan, "but I couldn't find one anywhere. I finally called Dan Olson to see if I could order one. Dan's son, Brian, really didn't want to make one but I kept pestering him and he finally did. I better take good care of it because I don't think he'll do another." 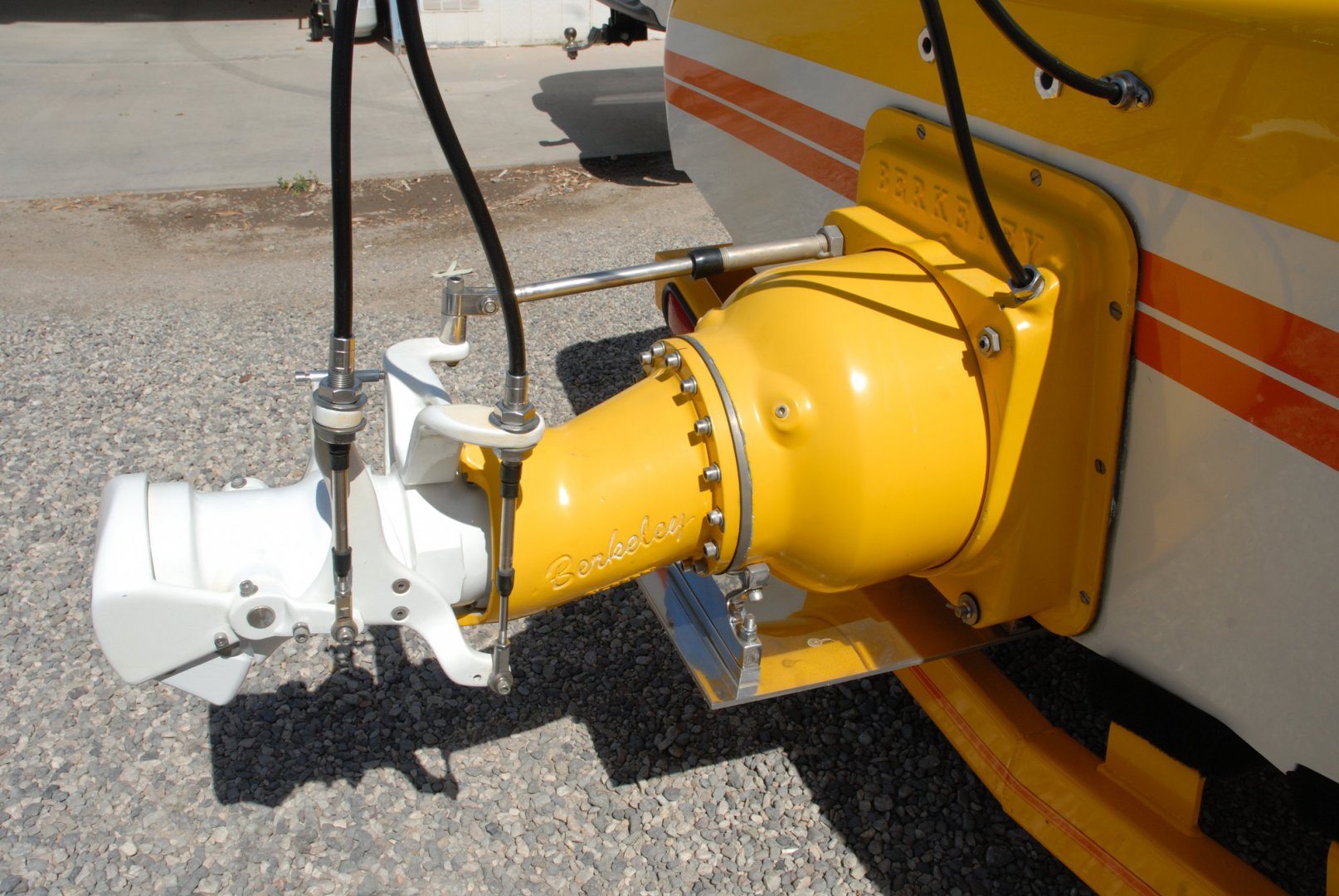 Since the hull and engine rebuild evolved into a bow to stern project. "I'm still using pretty much the same pump and hardware set-up that Don Lake raced with back in the '90s." says Bryan. "Don did the Berkeley pump and hardware work, and Jack McClure, who is a master at fine-tuning impellers, did the modifications. It's still the same droop snoot with a Place Diverter and a ride plate that raced in NJBA all those years." 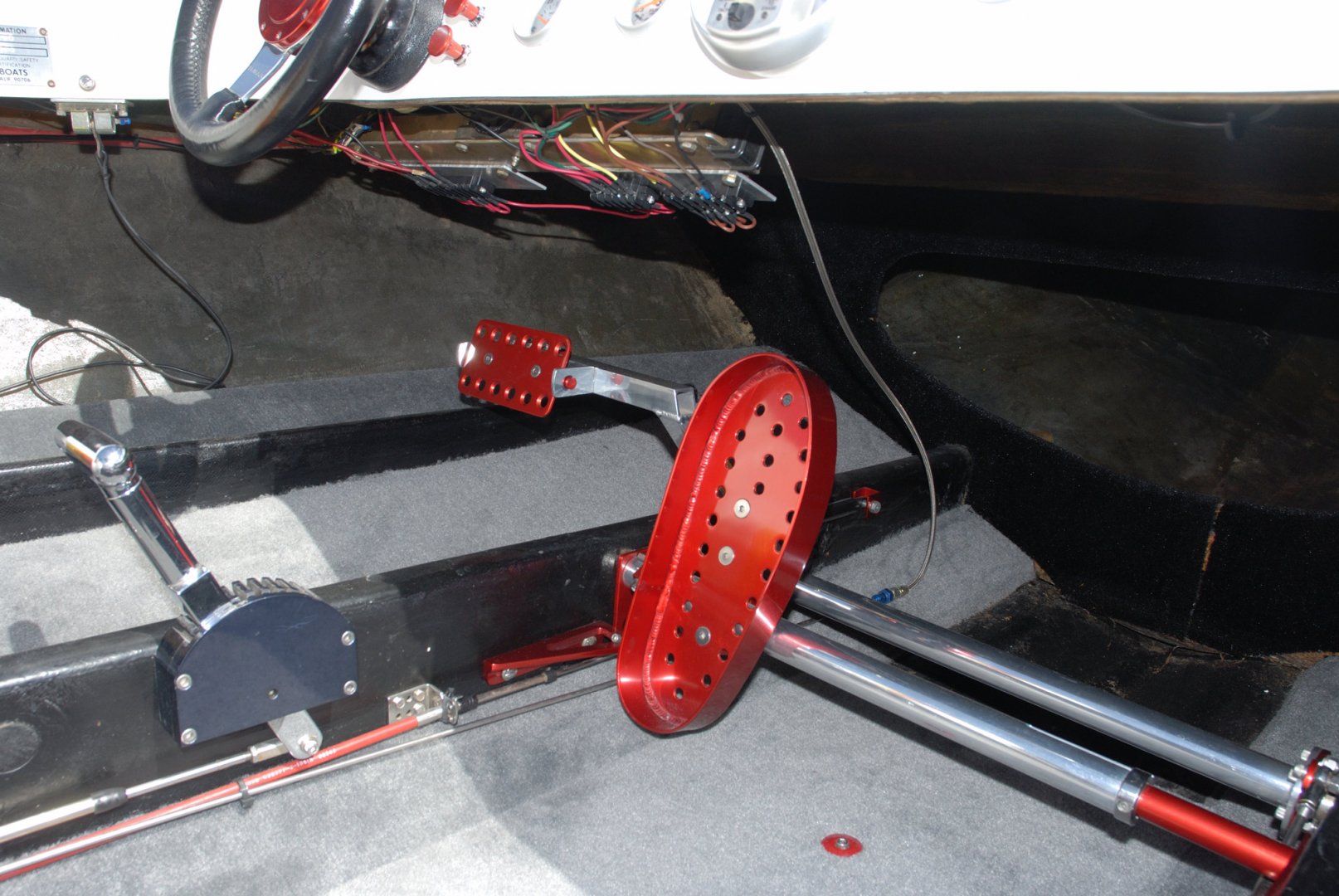 Bryan's Rogers also still uses the same left foot pedal controller to activate the Place Diverter. Bryan simply pushes on the pedal forward of the driver's seat to trim the nozzle downward for a quicker hole-shot, and then lifts off the pedal allowing it to return to a full up angle. Interestingly, the pedal is hydraulically actuated using a shock from a 1984 Porsche 944 Hatchback.....way to improvise! 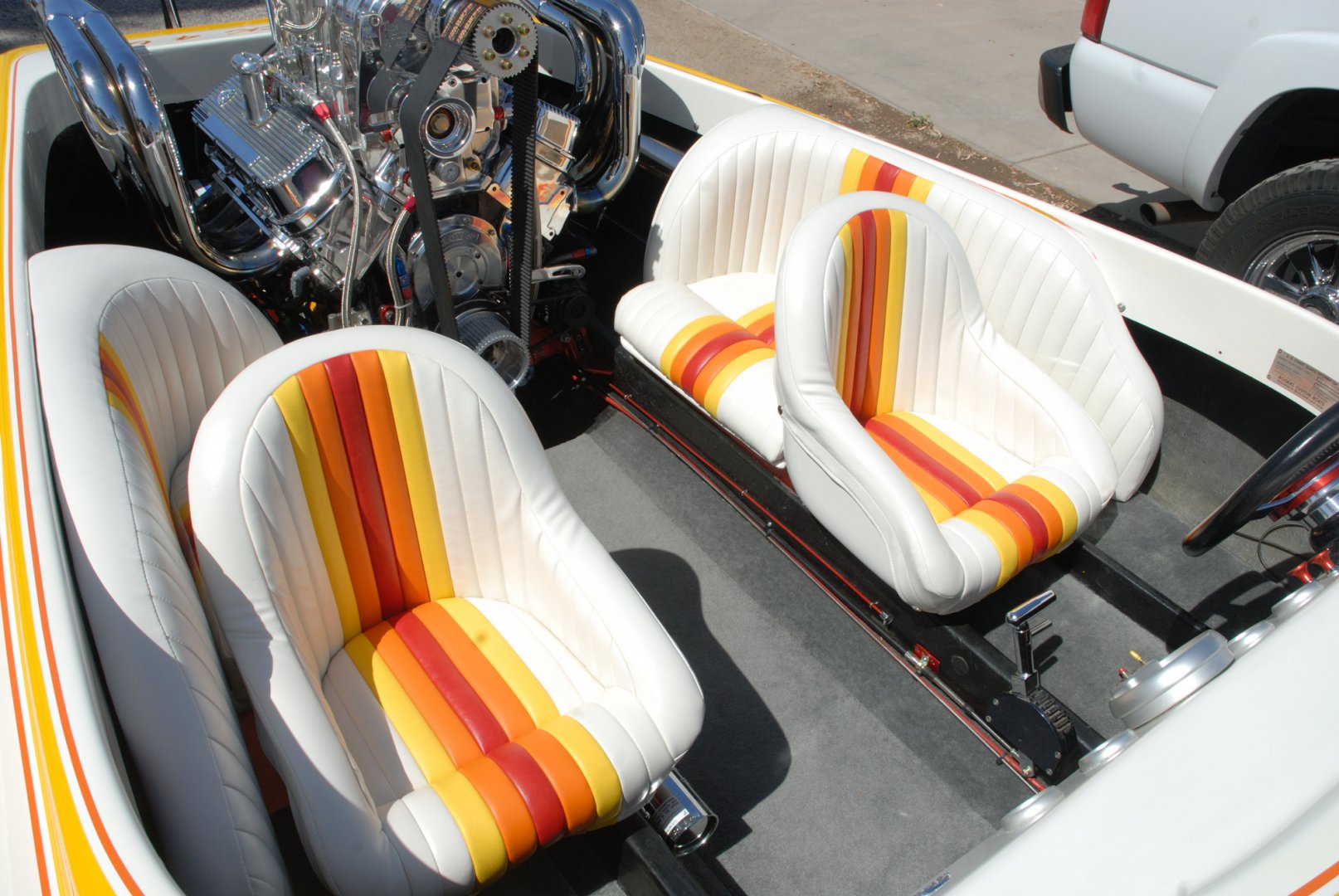 Checking out the exterior, the 42-year old Bonneville still looks as crisp and sharp as the day it left the Rogers factory. Since it's all original, that's quite an endorsement for what can be done if you take meticulous care of your gelcoat. If you notice, this Rogers has no rubrail at the hull and deck joint. That's because when the hull was new, it made a stop at Ken Myers B&K Boat Repair shop in Bellflower, California and was capped. You also might want to admire the flawless 1991 Ellis tandem axle trailer that carries Bryan's Rogers from Big River to his home in Thousand Oaks, California.

The Bonneville make-over was a 15-month process according to Bryan. He dropped it in the water for the first time just this past March. Immediate plans are to enjoy it as much as possible with his family, dad and cousin Kevin this summer, and maybe pay a visit to an NJBA race in the fall. One thing is for sure, he will definitely be on point for another Rogers Regatta whenever the next one is scheduled.
Reactions: YumaRivernaut, One2go, Sharp Shooter and 13 others