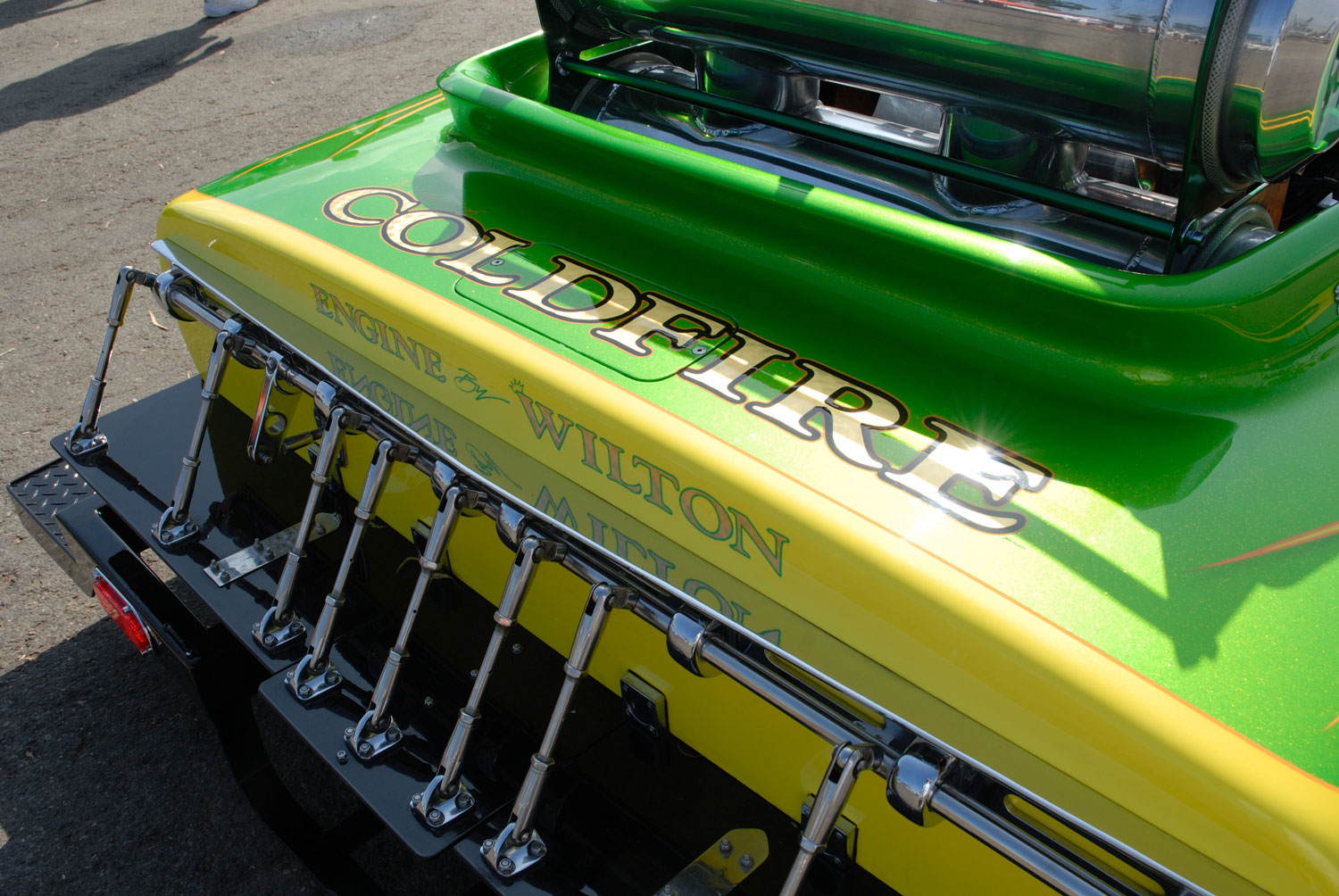 One of the first things I did when I took over the editorial reins at Powerboat Magazine in late 1973 was institute a new monthly feature, “Hot Boat of the Month.” And choosing the first boat and driver to be so honored was easy…..it had to be my all-time favorite inboard circle race boat, K-50 “Cold Fire” driven by the irrepressible Julian Pettengill from Glendale, Arizona.

When that magazine hit the newsstands and home subscriber mailboxes over 45 years ago, it was an instant home-run. We received more pat-on-the-back letters from readers about that one article than everything else combined that we had done in the magazine the previous year. 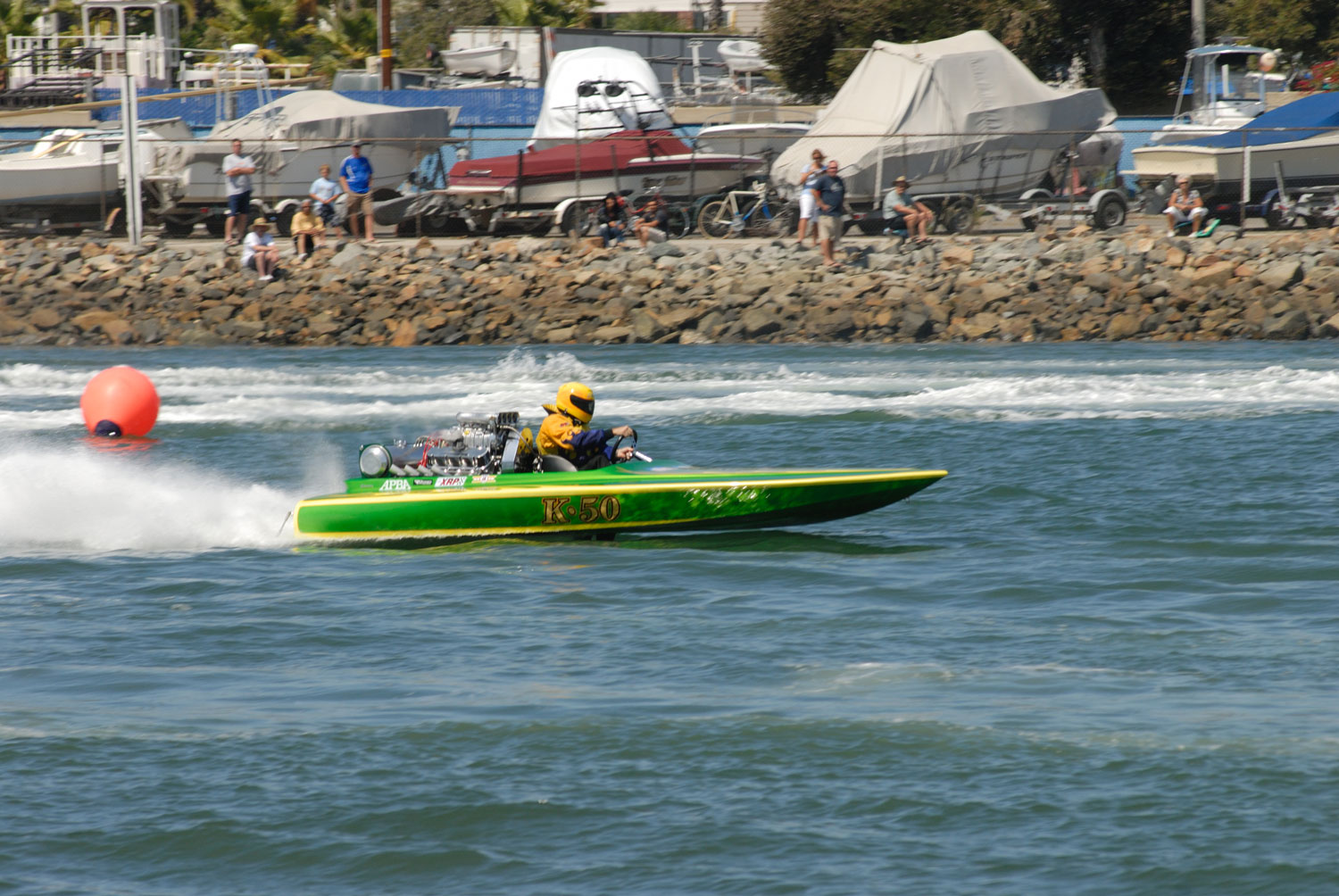 I don’t know if it was the glistening emerald green and gold accent paint scheme or the fact that “Cold Fire” was capable of bringing an entire crowd of spectators to their feet by merely starting the Bubby ‘Wilton blown Chevy engine in the pits, but the boat had as much charisma as it did horsepower. And it also didn’t hurt that one of the most talented and aggressive flatbottom sprint boat drivers in the history of the sport was pushing the pedals and turning the wheel. 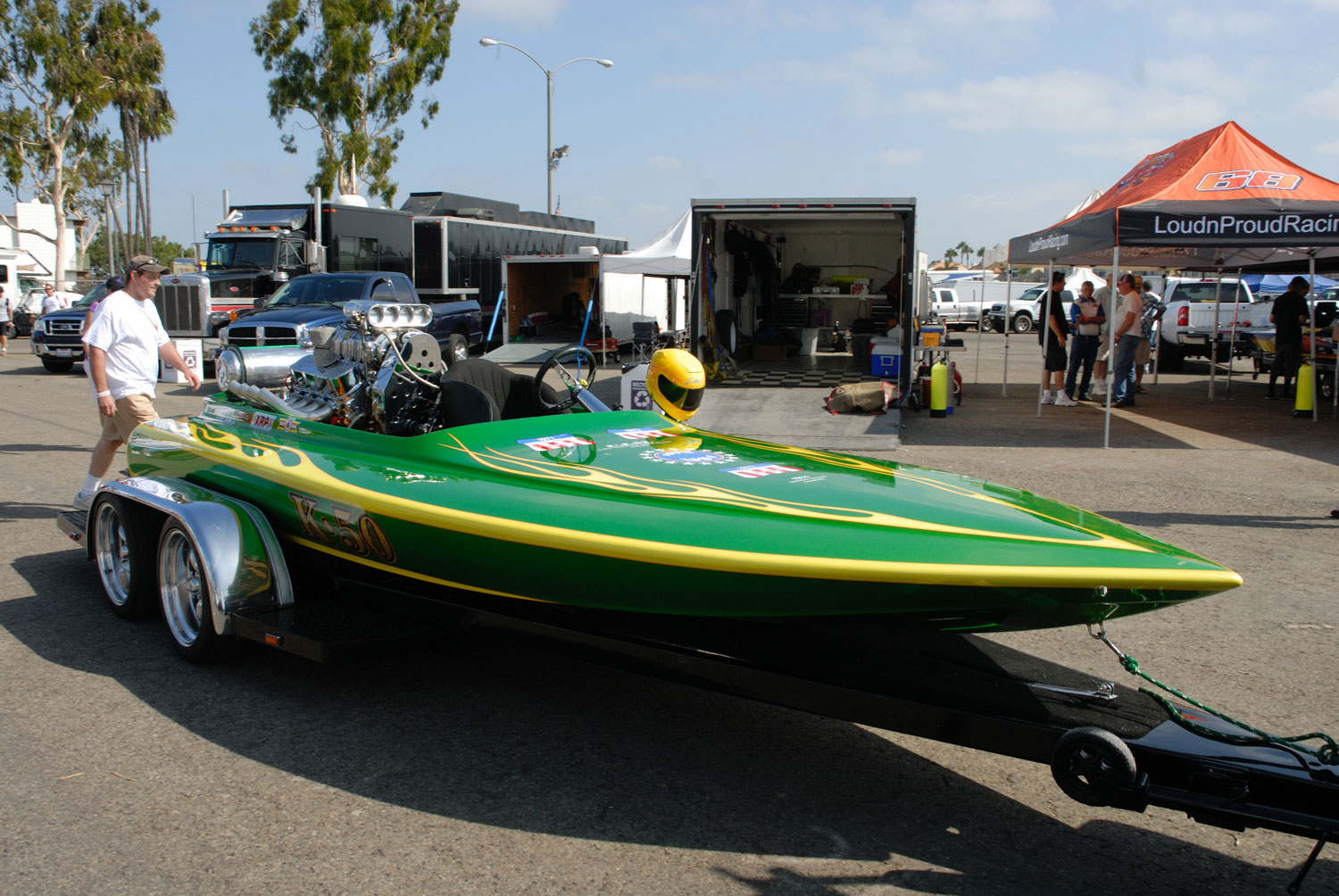 But, like most things in motor sports, every era eventually comes to an end and “Cold Fire’s” domination of the K-class in the 70s was no exception. Biesemeyer flattys continued to be prominent on the circle race scene, but none seemed to ever instill as much anxiety among fellow racers, or the level of fan worship as the original green rocket.

Fast forward almost thirty years to October 2004. Flatbottom aficionado Wayne Herbert from Laguna Hills, California got a phone call from his good friend, Billy B, the Rembrandt-like boat painter of Krazy Kolors in Alta Loma (now relocated to Needles, California).. Billy had important news…..a Julian Pettengill built 1975 Biesemeyer twin to “Cold Fire” was for sale. The hull was virtually an exact duplicate of the original race boat right down to the unique three-piece cavitation plate, and it was owned by Julian’s son who used it as a family ski boat. 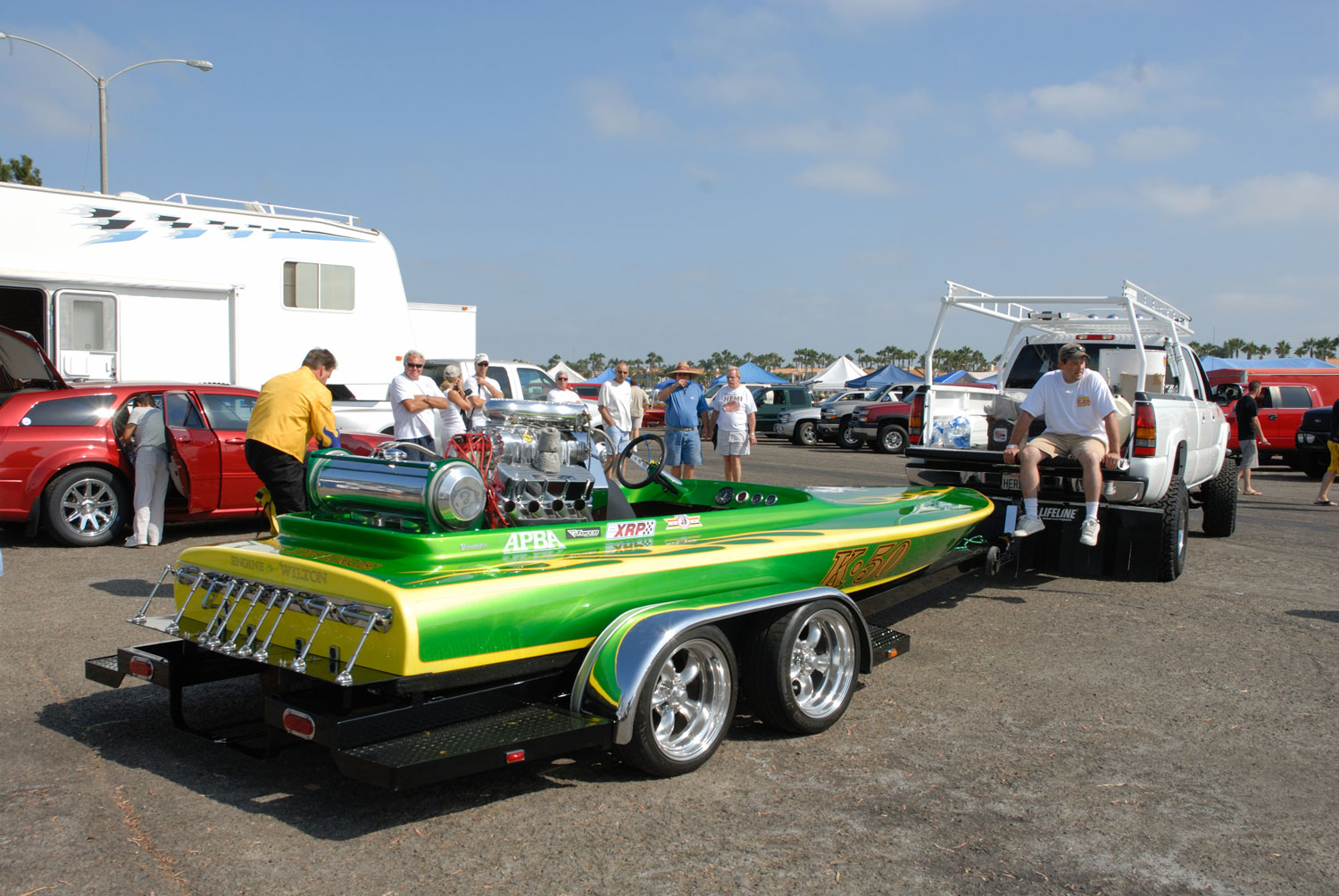 Wayne wasted no time. He knew what he had to do. Sitting in Julian’s living room discussing the purchase, Wayne laid out his intentions. “We wanted to restore the Biesemeyer twin to as close to the original “Cold Fire” as humanly possible, right down to an identical engine, rigging, upholstery, gauges and of course, paint scheme,” said Herbert.

After some good salesmanship, Julian signed off on the project, even to the extent of allowing Wayne to emblazon the sides of the hull with the iconic K-50 numerals and APBA National Championship shields on the deck (1971-1973-1975). The next step in the process was to entice long-since retired engine builder,
Bubby Wilton, to build one more blown alcohol Chevy. And he did.
. 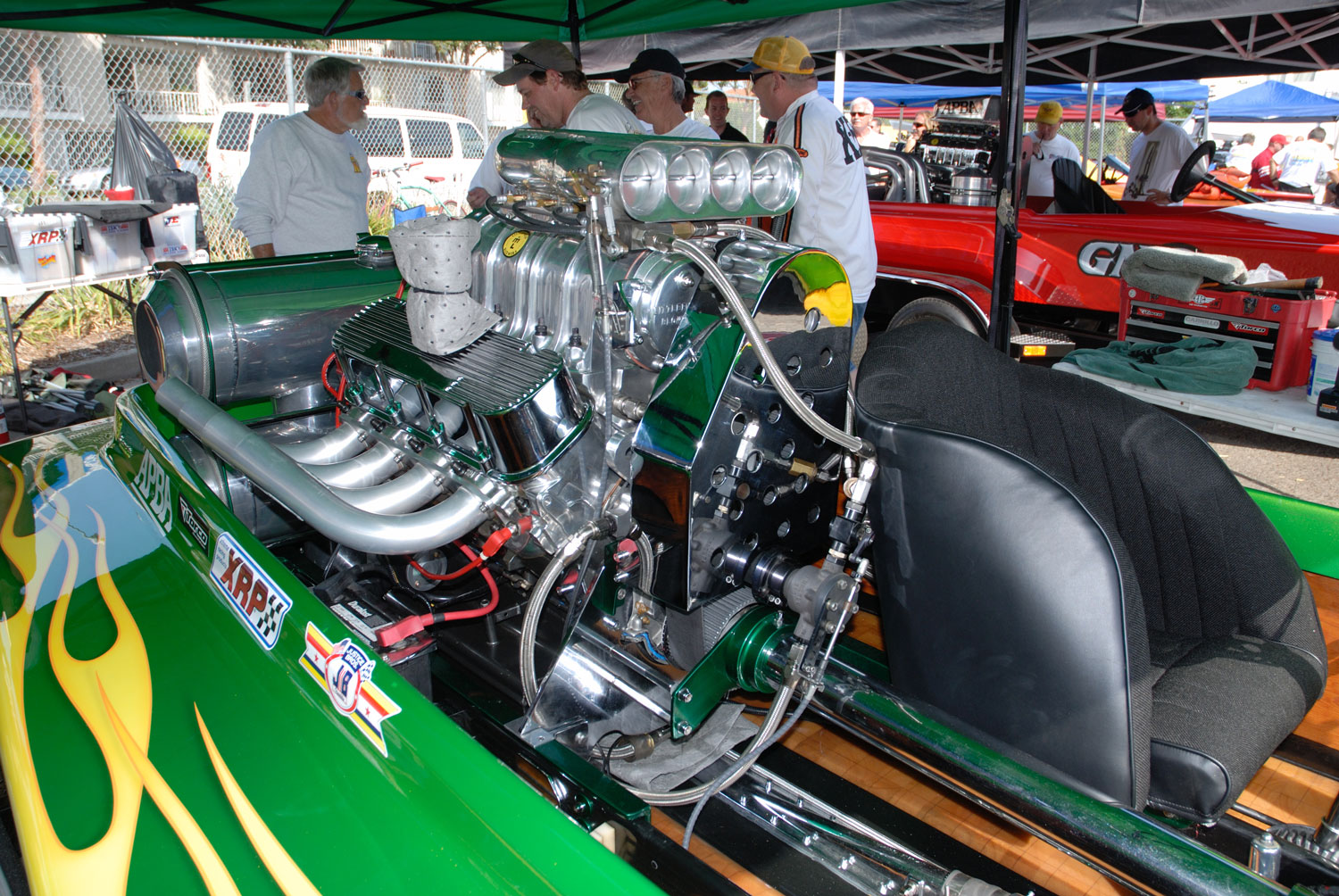 “I could have never accomplished this replication alone,” commented Wayne. “It was a team process and just a great experience bringing all these people back together again. Watching Julian and Bubby get excited about putting this boat back together as a clone of the original “Cold Fire” was a genuine pleasure. And then to watch the fan reaction we get at the boat races is just the icing on the cake. It’s amazing how many people remember this boat and enjoy telling stories about its many wins.” For those not students of history, the Wilton motors in both the past and present “Cold Fires” are identical. Relatively small cubic inch displacement (just under 461 c.i.) Chevy’s running on alcohol through an 871 blower and injectors. Internal parts are the best money can buy — Carrillo Rods, J&E Pistons and an Isky roller camshaft. 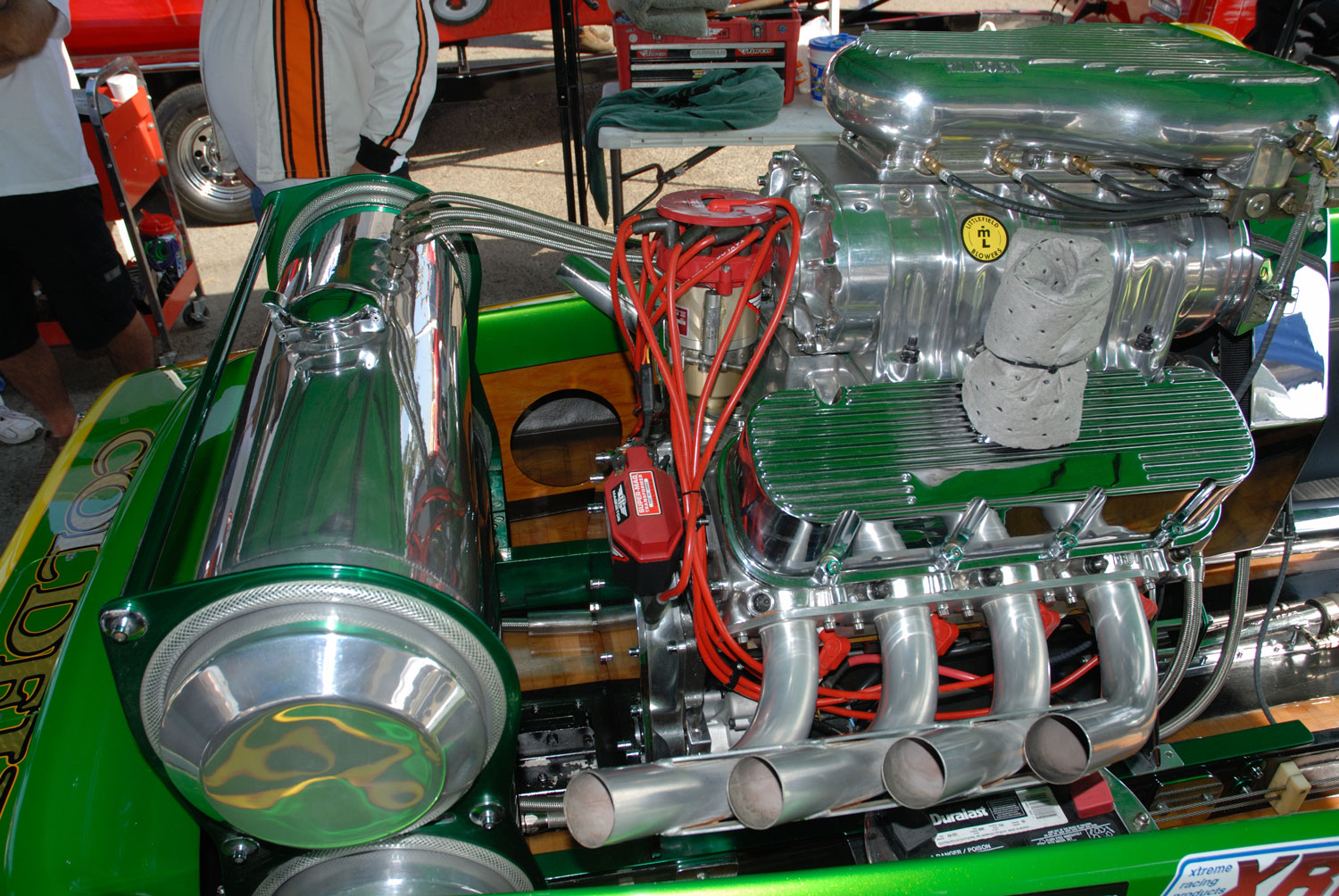 “Compared to what some of the other K-Boats are running for power today, we’re very mild,” said Wayne, “but Bubby really gets the most out of an engine. It’s really a matter of balancing the horsepower and torque to what the hull and driver can handle. If you can’t efficiently apply the horsepower to the water, you’re not going to win races. Since we’re a totally open cockpit boat, we’re old school to the core. I’m just glad APBA modified the tech rules to allow boats of our type to still compete. I think the fans still like to see traditional K-Boats. It’s something they can relate to.”

What’s most unmistakable about “Cold Fire’s Ghost” is its paint and graphics, thanks to the talent of Billy B at Krazy Kolors. “I let Billy kind of do this own thing. He knew what I wanted and we had pictures to go from. It had to match the original “Cold Fire” but with a few little signature touches from the master. It couldn’t have been better.”

Once the initial restoration was done, Wayne decided to take a shot behind the wheel in competition. “I’ve driven both flattys and hydros for a very long time down on the Colorado River near Needles. In fact, just as a joke, I formed a little club called NKRA (Needles K-Racing Runabout Association) since we often have a half dozen or more K-Boats at the River just for weekend fun. But river racing at sundown isn’t nearly as intense as lining up for the start of a five-mile K-Boat heat.
Julian gave me some good coaching on how to drive but it’s definitely a take-no-prisoners kind of sport.” 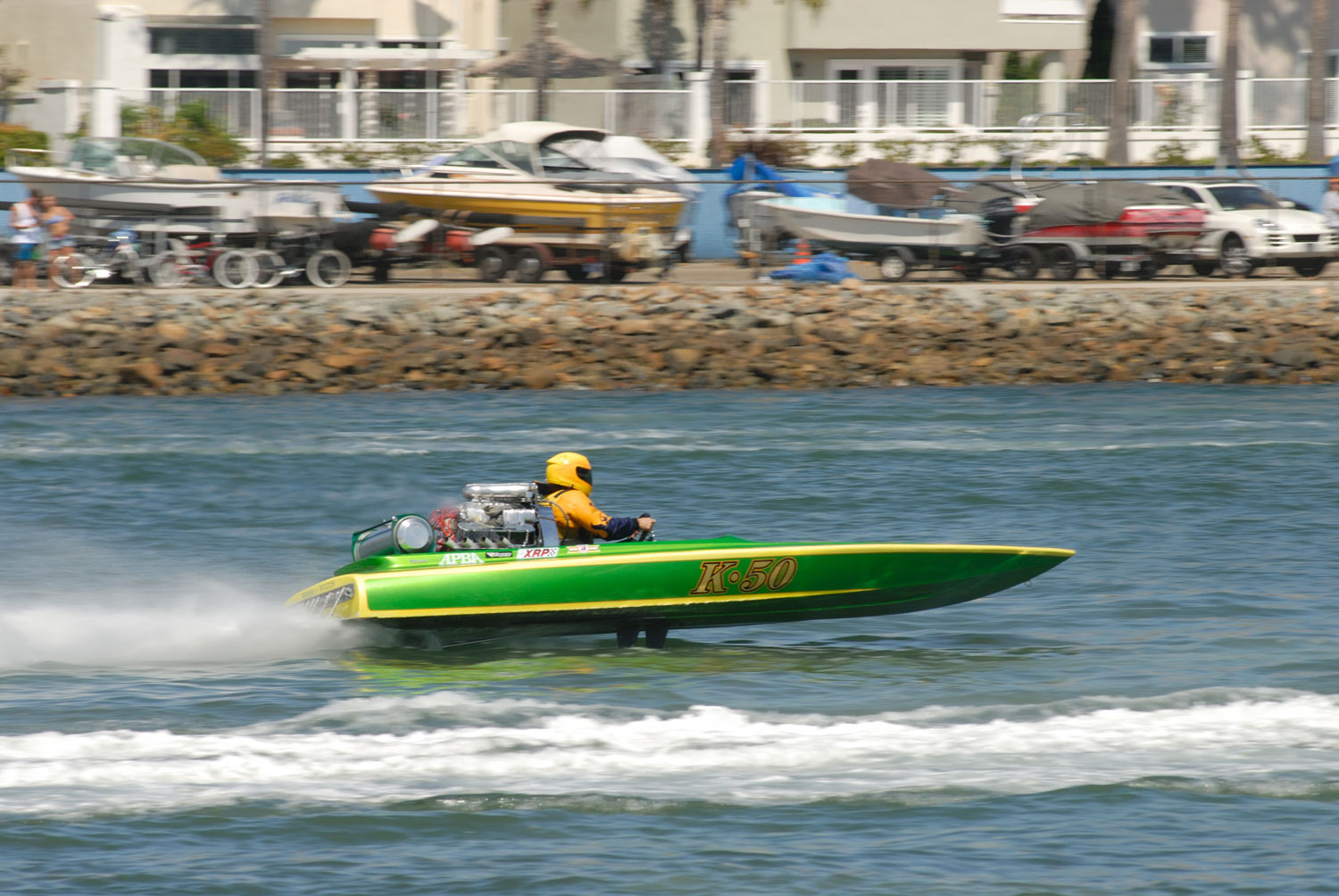 One of Wayne’s favorite race sites is legendary Long Beach Marine Stadium. “I grew up watching boat racing at the Stadium,” said Wayne. “It’s the best place ever to be a racer or a spectator. ”Much to the chagrin of the boat racing community, racing at Marine Stadium is now limited to only one event a year, but it’s a good one. Called the Long Beach Sprint Nationals, the August 2009 event was the site of several APBA class National Championships including K-Boats. Before the race, Wayne made a bold decision. “I asked Dave Bryant if he’d drive the boat for our team at the Nationals in Long Beach. I really wanted to see what the potential of “Cold Fire” was with a top notch flatbottom wheel-man in the cockpit. And Dave’s the right guy for that job.” 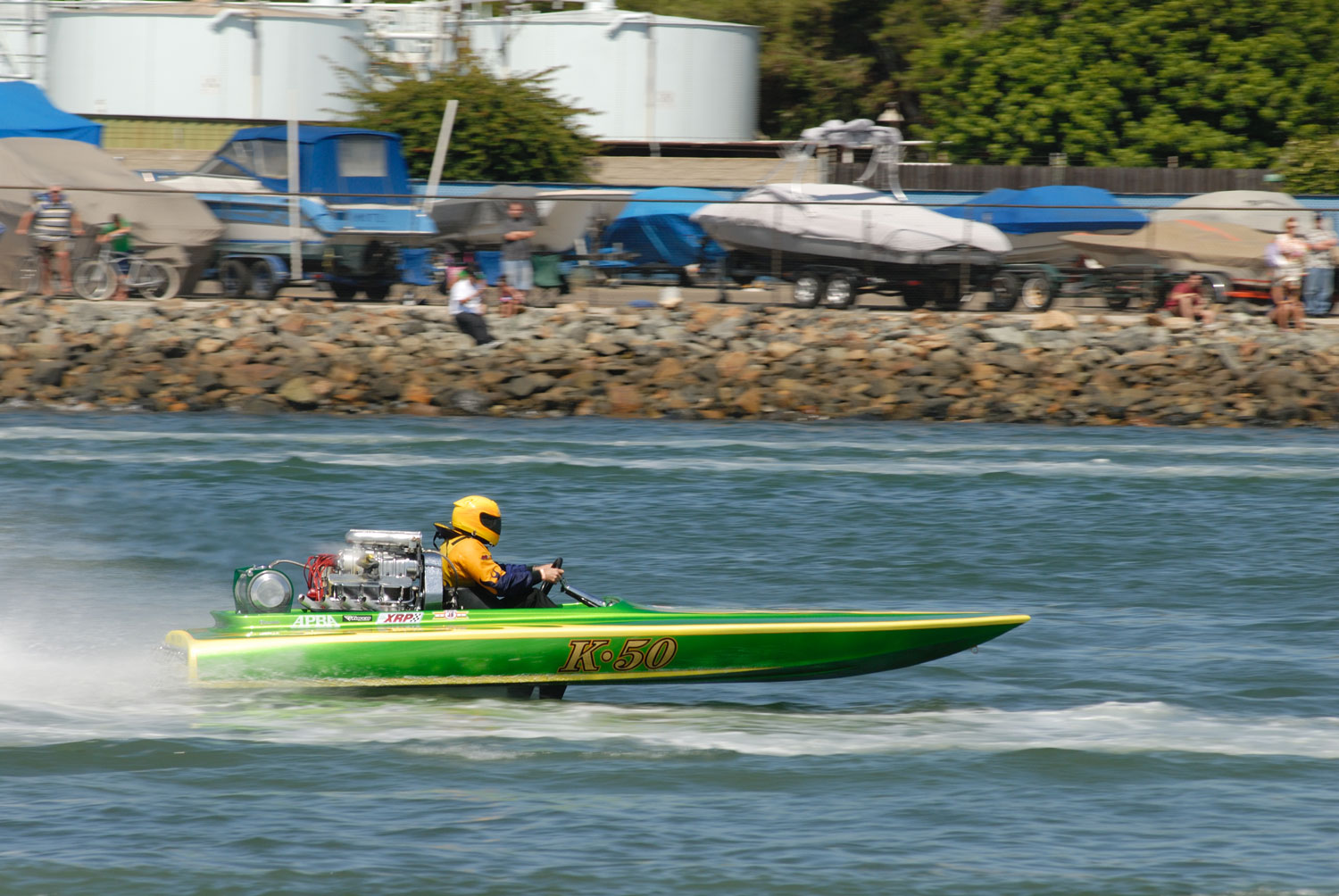 As things worked out, the championship match-up pitted “old school” versus “new school” with K-Boat standout Tony Scarlata on the pedal of the fully capsuled and very potent K-69 going gunnel-to-gunnel with “Cold Fire” for the title. “Dave had never been in my boat before the Long Beach weekend,” said Wayne. “It was a little disorienting for him at first since everything in the boat was like turning the clock back 35 years. But he was a true professional, and after a few laps, he really started to get acquainted with the boat and settle in.” 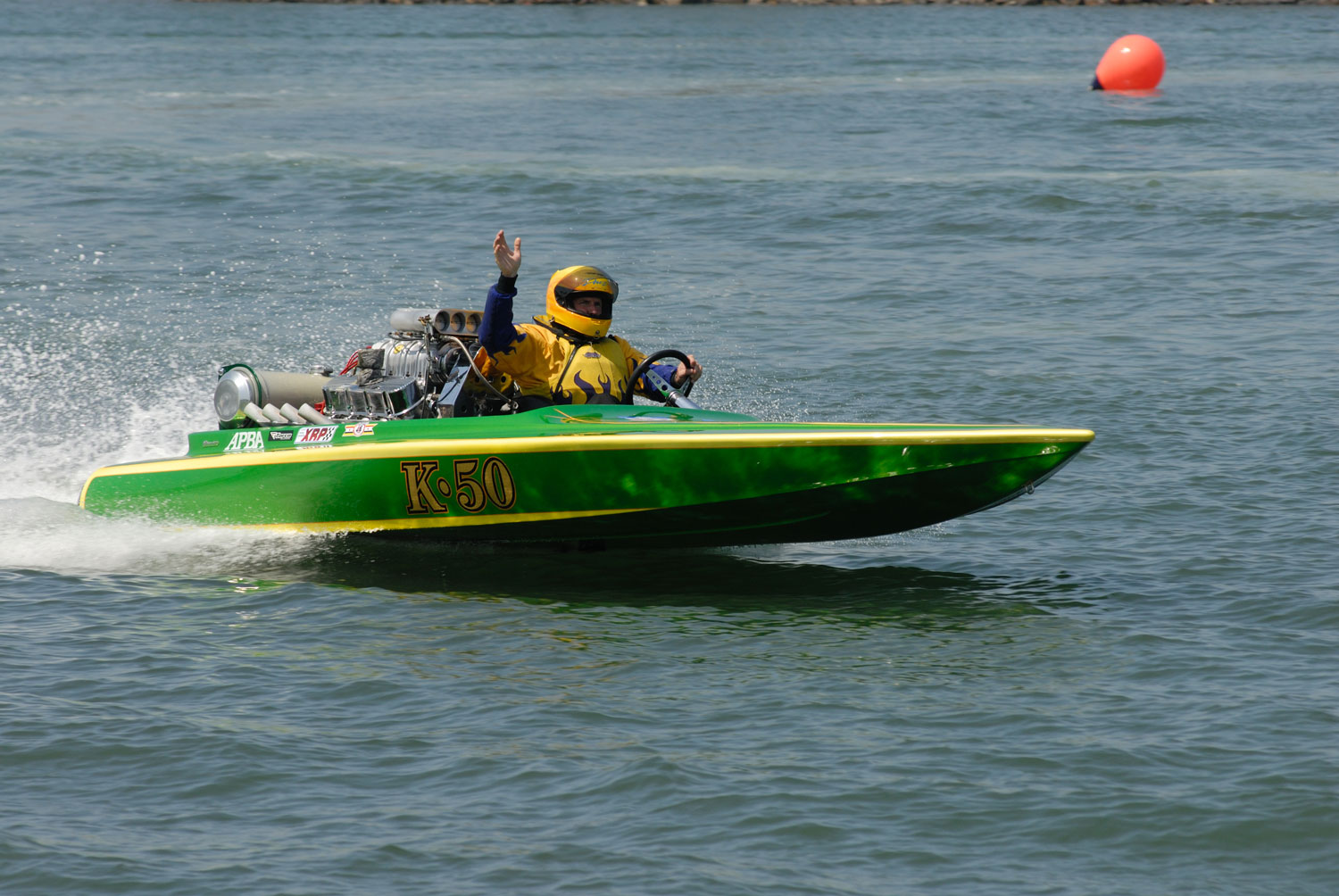 On that summer Sunday afternoon several thousand fans were treated to an epic boat race. A dizzying five-lap duel that had every person on their feet. “Cold Fire” was at its best, smooth in the straightaways, fluid in the turns, and flat-out fast from start to finish.. “This was a dream come true. I couldn’t have been happier with the win for everyone in our crew. Without Julian, Bubby, Billy, Dave, Todd and everyone else who contributed, this would have never been possible. I guess it just goes to prove, sometimes you can go back.” 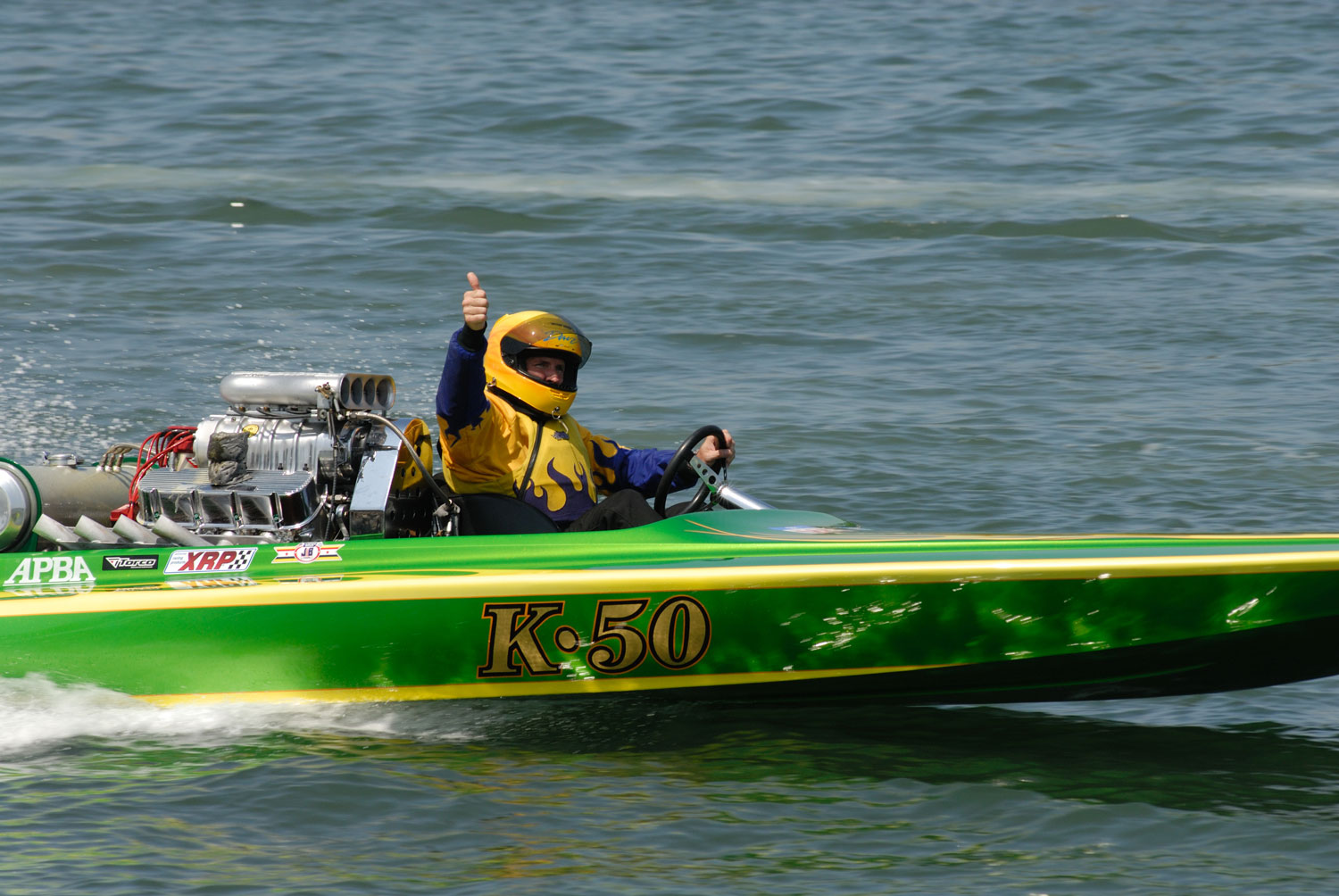 Editor’s Note: Tragically, driver Dave Bryant was killed in a boat racing accident in
Australia in 2010. Our sympathies to his family, friends and many racing fans. A truly great loss to boat racing.
Several years ago, Wayne also suffered serious back injuries when he was ejected from the seat while stretching “Cold Fire Ghost’s” legs a bit on the Parker Strip during a high speed romp. Wayne is slowly recovering.
Reactions: Beautiful Noise, YumaRivernaut, Nanu/Nanu and 5 others

Love reading this stuff great history... this is the stuff that brings me back RDP daily...
Read more…