Article Gallery
Nick Barron had been the head honcho at Hallett Boats in Irwindale, California going on fifty years plus. He's seen and done it all; experienced every trend, fad and innovation that the performance boating industry could throw at him. 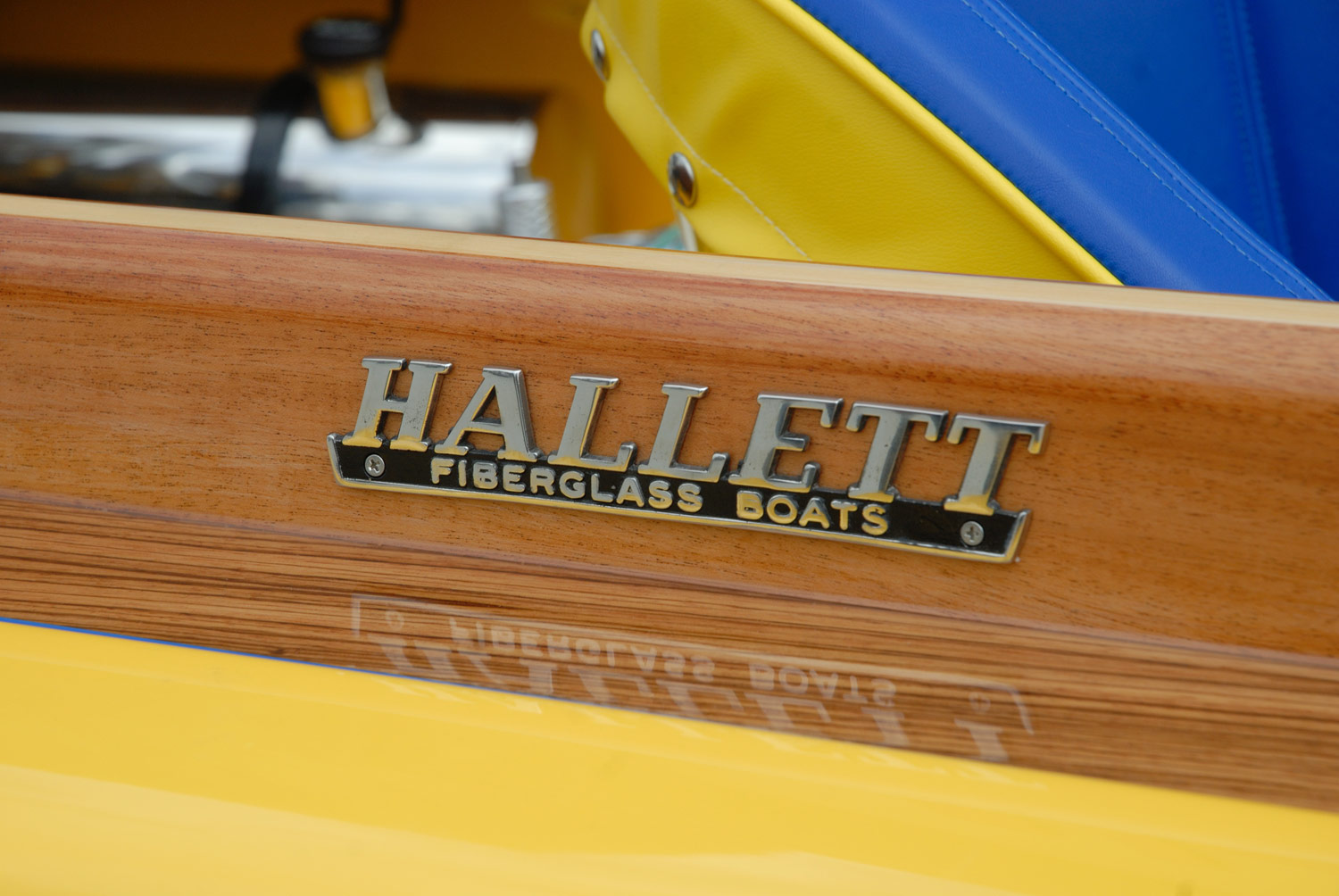 Back in 1961, Nick was just getting started building fiberglass flatbottom ski boats, something he hadn't done in several decades since graduating into a line of much larger and more luxurious family performance sportboats considered among the best in the entire industry. But Nick wasn't one to forget his roots. 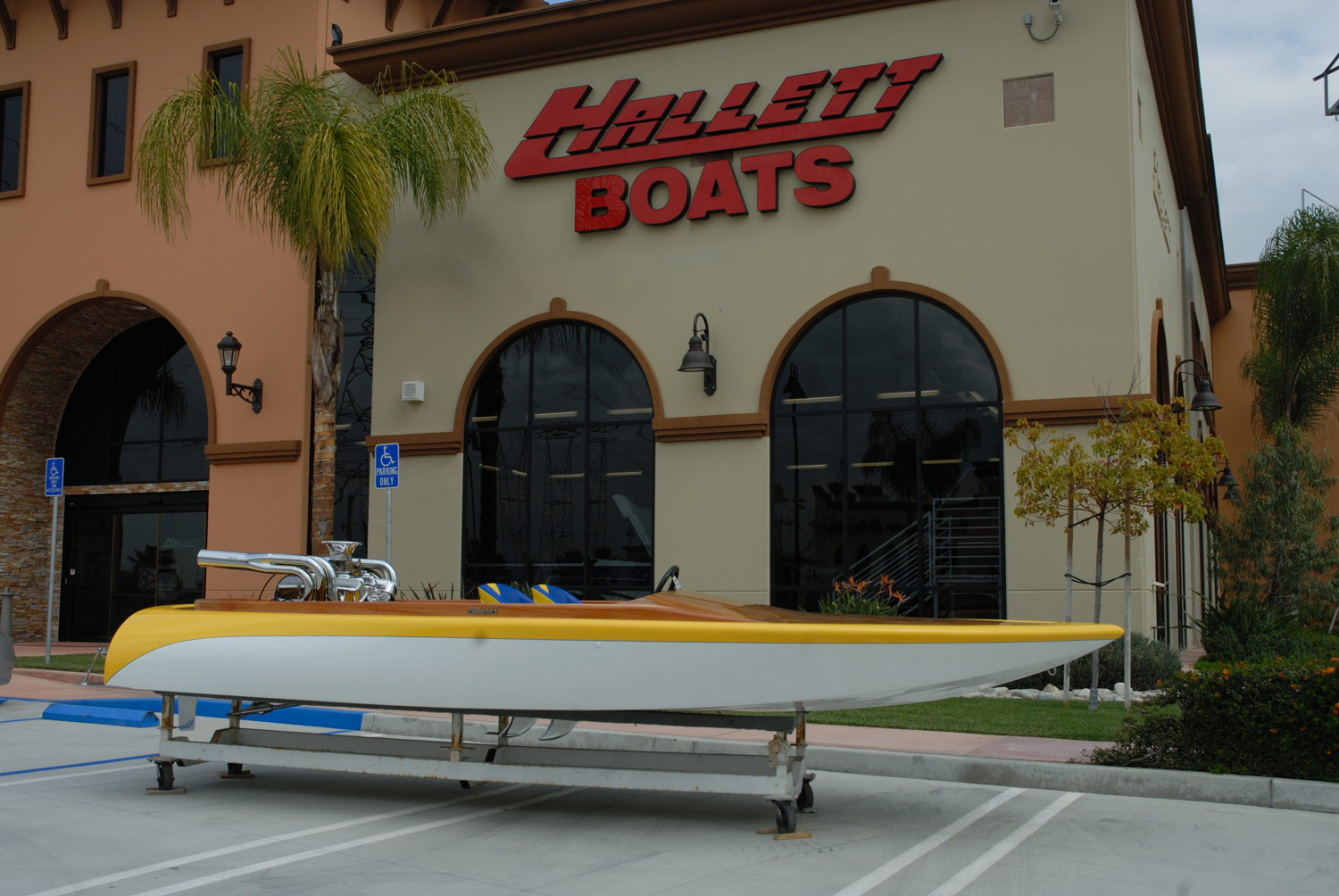 In fact, about twenty years ago Nick found one of his original 1961 17-foot flatbottoms for sale in Utah. Being an avid hot rod restoration fan and owner of a number of championship caliber classic display cars, Nick couldn't resist the opportunity to revive one of his own creations and bring it back to show quality.

Once home, the '61 Hallett flatty sat in the Irwindale shop for quite a spell with little or no progress. "We were just too busy building boats for our customers to devote much time or energy to the project," commented Nick. "There really wasn't any hurry and I knew we'd eventually get around to working on it."

Although nobody is pleased with the economic slowdown in the recreational boating industry starting in late 2007, the one bright spot was it gave Nick and his crew of expert craftsmen at Hallett an opportunity to complete one of the most pristine flatbottom restorations of all time. "I wanted to stay more old school with the hull, paint, upholstery and rigging rather than use a lot of custom CNC machined billet hardware and a dozen different colors," said Nick. "Back in '61, boats were a lot more simple."

Somebody at the Hallett shop had to head-up the restoration project and that duty fell upon the shoulders of Ray Torrez (aka Ray Ray) who has been one of Hallett's ace riggers and service technicians for nearly a decade. Ray is also a V-drive expert and one of the best at his craft. 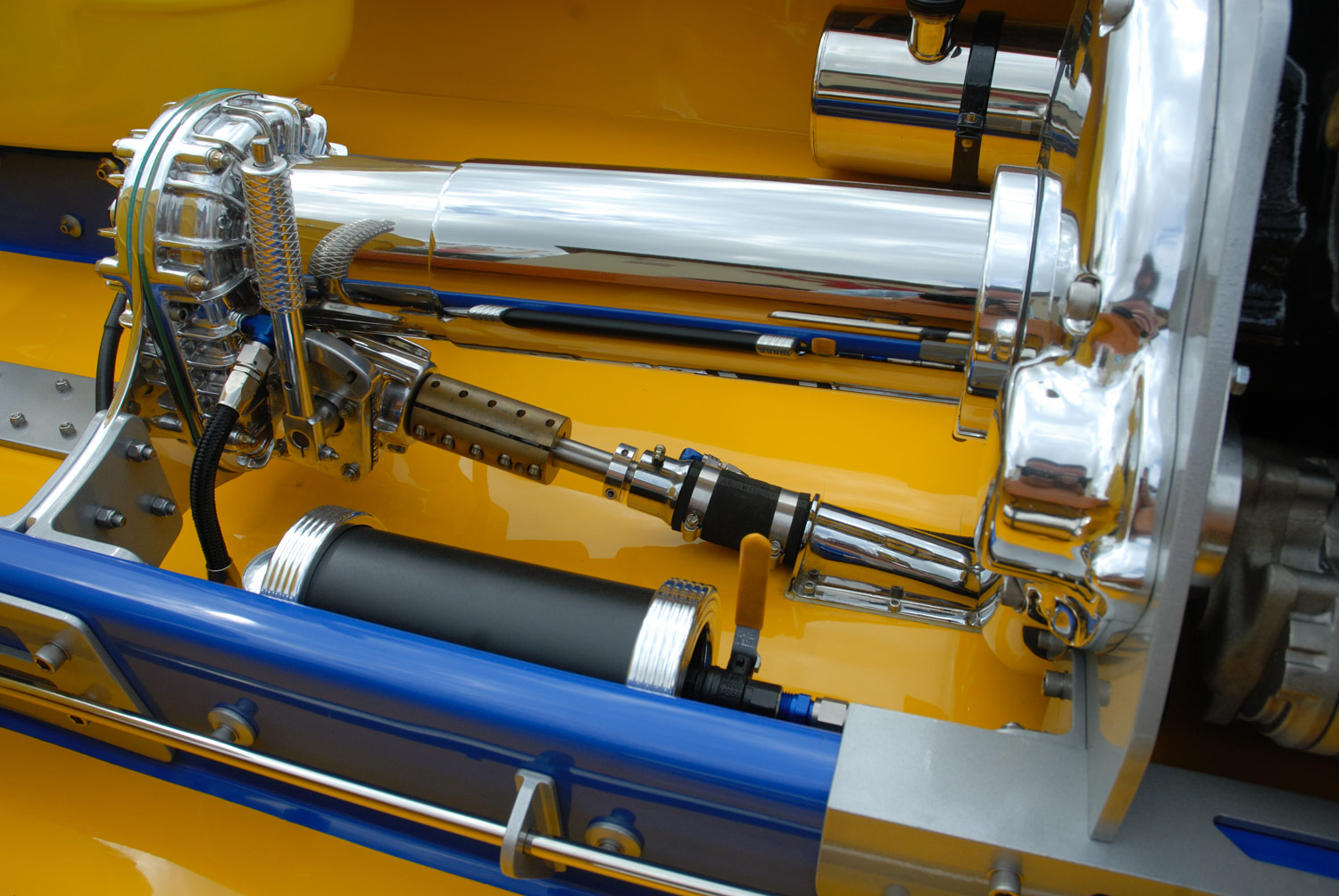 One of the first orders of business was to remove the original wood deck which was showing its age and replace it with a new one using heavily-grained zebra wood. That job naturally went to Harlan Orrin, a long-time friend of Nick's who has also provided new boat tooling services for Hallett on more than one occasion. "Harlan's the best when it comes to wood decks," said Nick. "He's probably done more custom wood decks than anyone else in the industry." 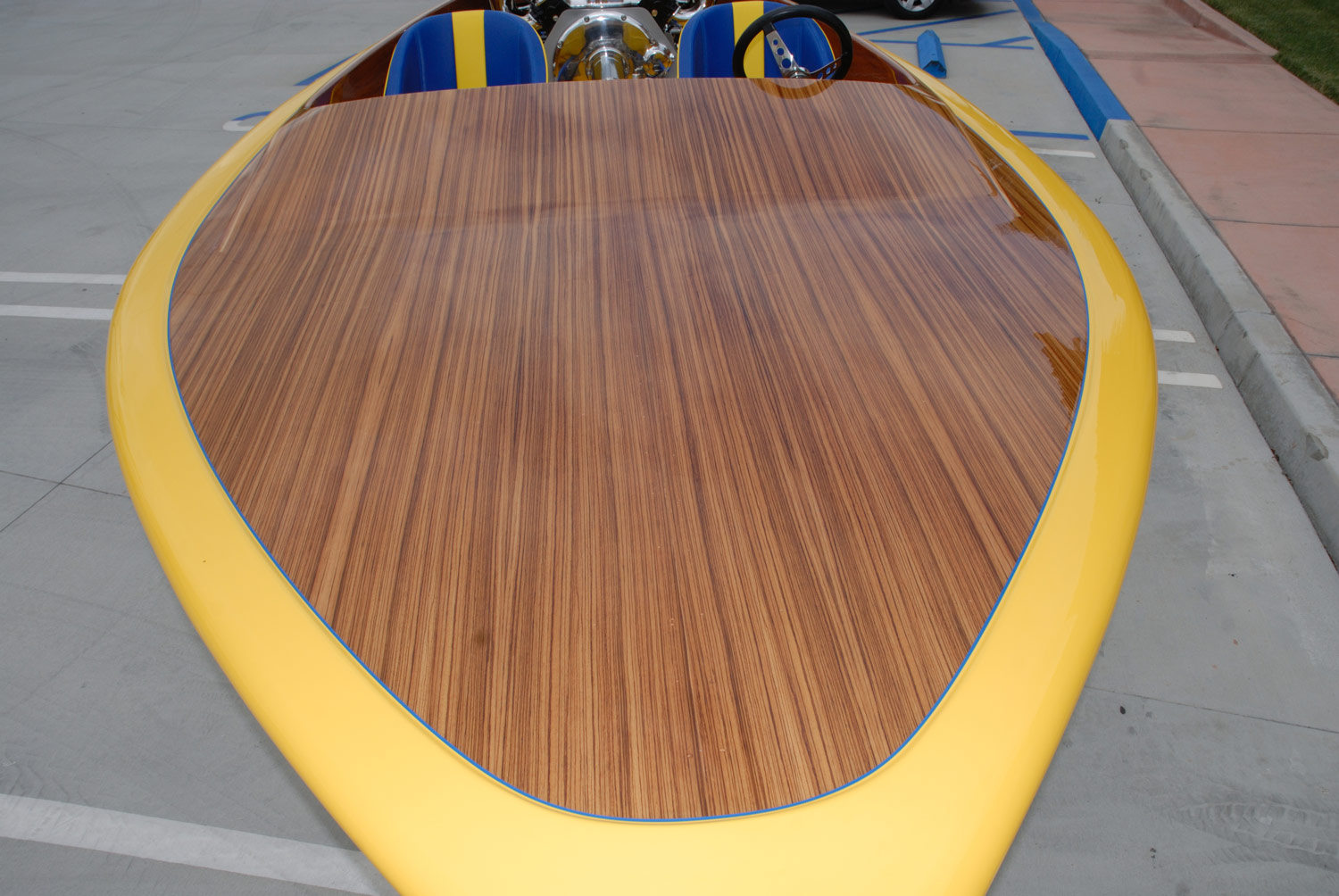 After the hull was gutted of engine and hardware and the new deck was on, it went to B&K Boat Repair in Bellflower, California. Owner, Ken Meyers, has operated one of the best and busiest fiberglass, gelcoat and boat painting businesses in Southern California since the early 1960s. Meyers did the finish work on the wood deck, applied and buffed the clear coat, and repainted the hull in a simple but striking white and yellow with blue accent motif reminiscent of the 1960s era. Meyers also sanded, prepped and painted the floor and stringers for an incredible high gloss matching yellow and blue two-tone gelcoat finish.

Once the flatty got back to the Hallett factory, Ray Torrez went to work. One of the first decisions was what to power it with. 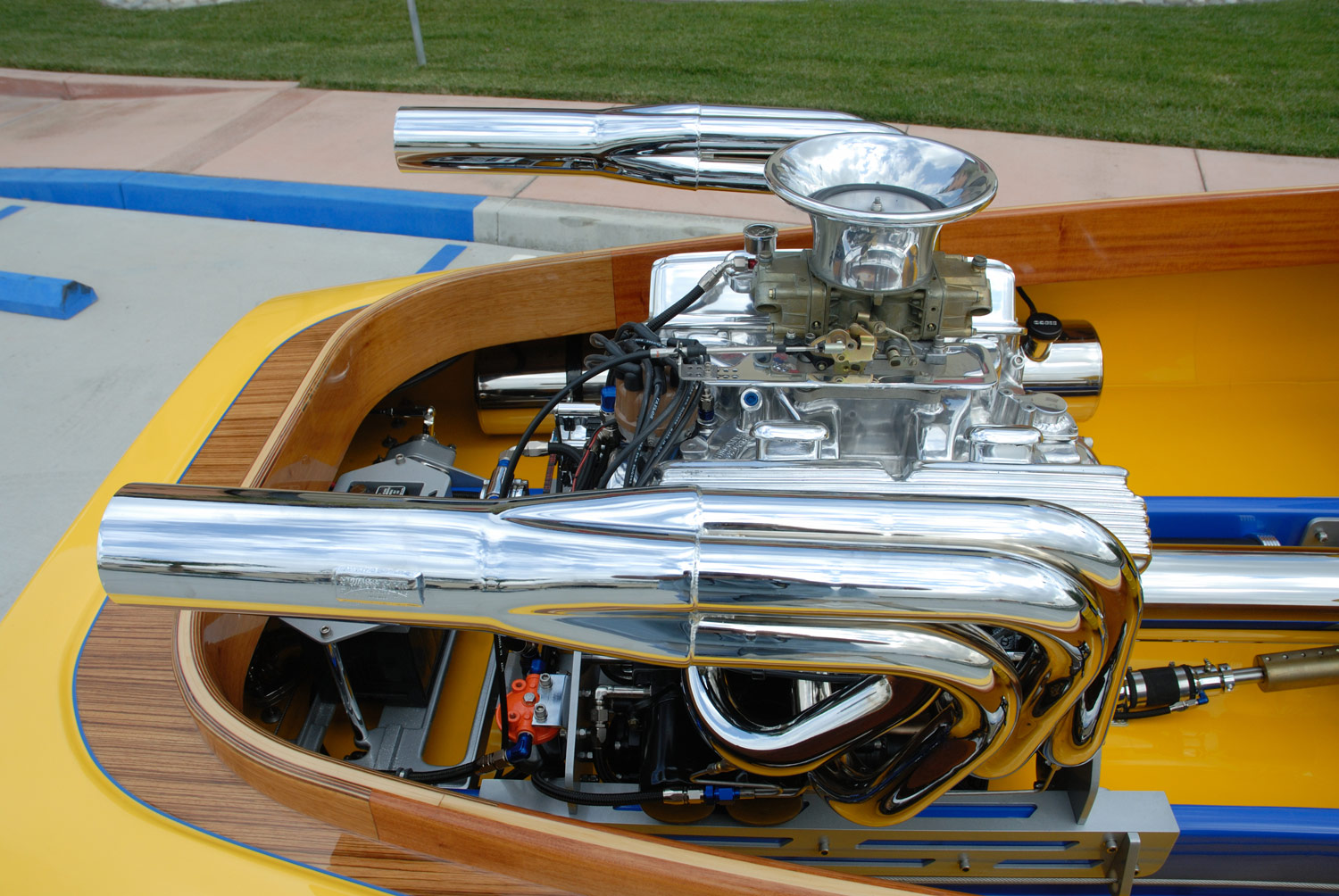 After some searching, Nick located a not-so-common Holman and Moody 427 Ford V-8 side-oiler which perfectly fit the 60s theme of the boat. The engine was sent out to Paul Grichar Racing Engines in West Covina, California for some machine work on the block plus a complete internal balance and blueprint job. While at the Grichar shop, the Ford got a new set of forged JE Pistons, a custom 12 quart Dooley oil pan, a set of LeMans connecting rods and a Comp 294 solid lifter flat tappet camshaft. 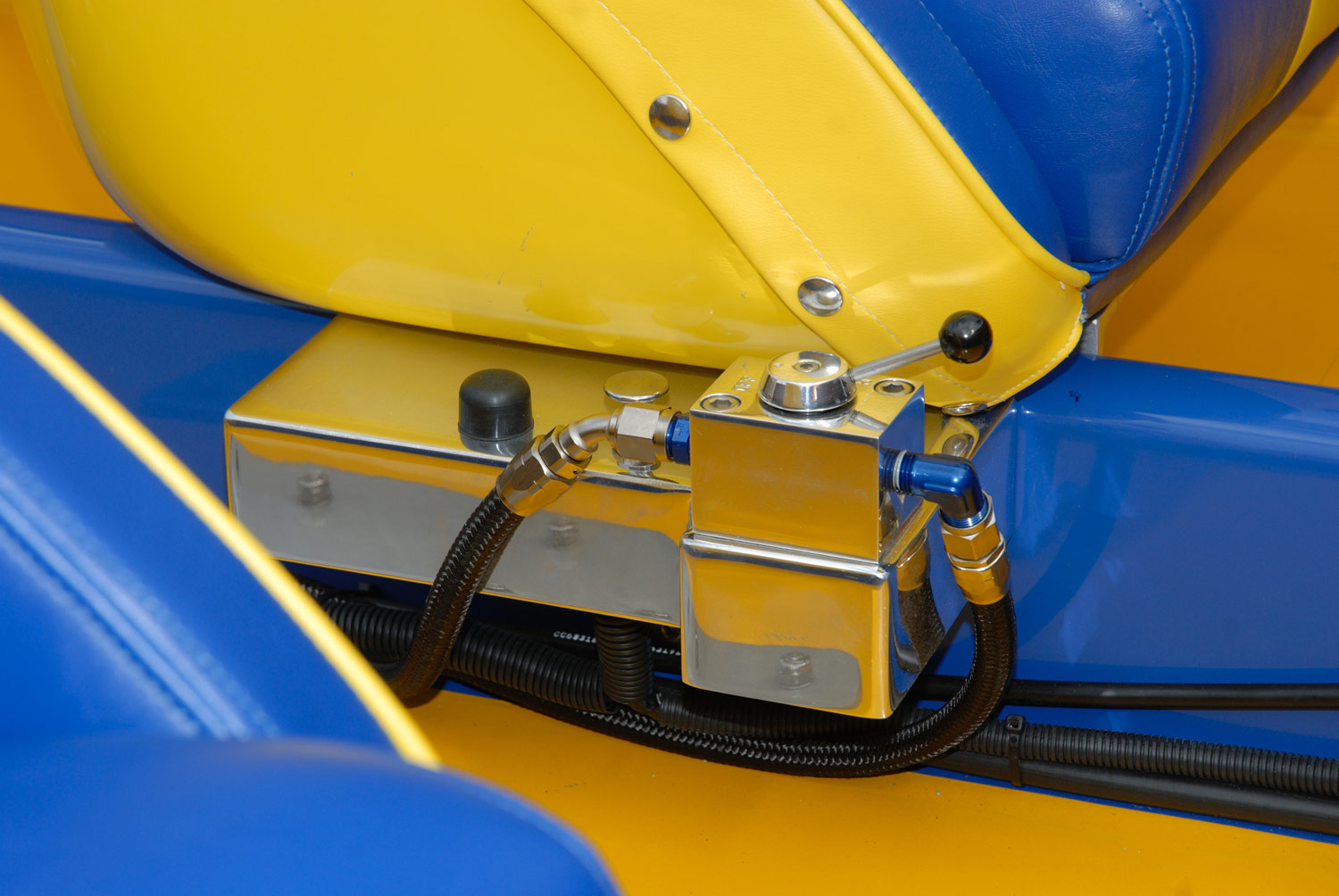 Chrome headers with water injection were from Bassett. On the dyno, the V-8 side-oiler churned-out an impressive 536 horsepower with a single four-barrel carb.

While the engine was out being prepped, Ray kept busy with the rigging which included a new in/out Casale V-Drive with 15 percent over gears, a pair of IMCO polished stainless steel gunnel fuel tanks and all new fabricated stringer rails and motor mounts. 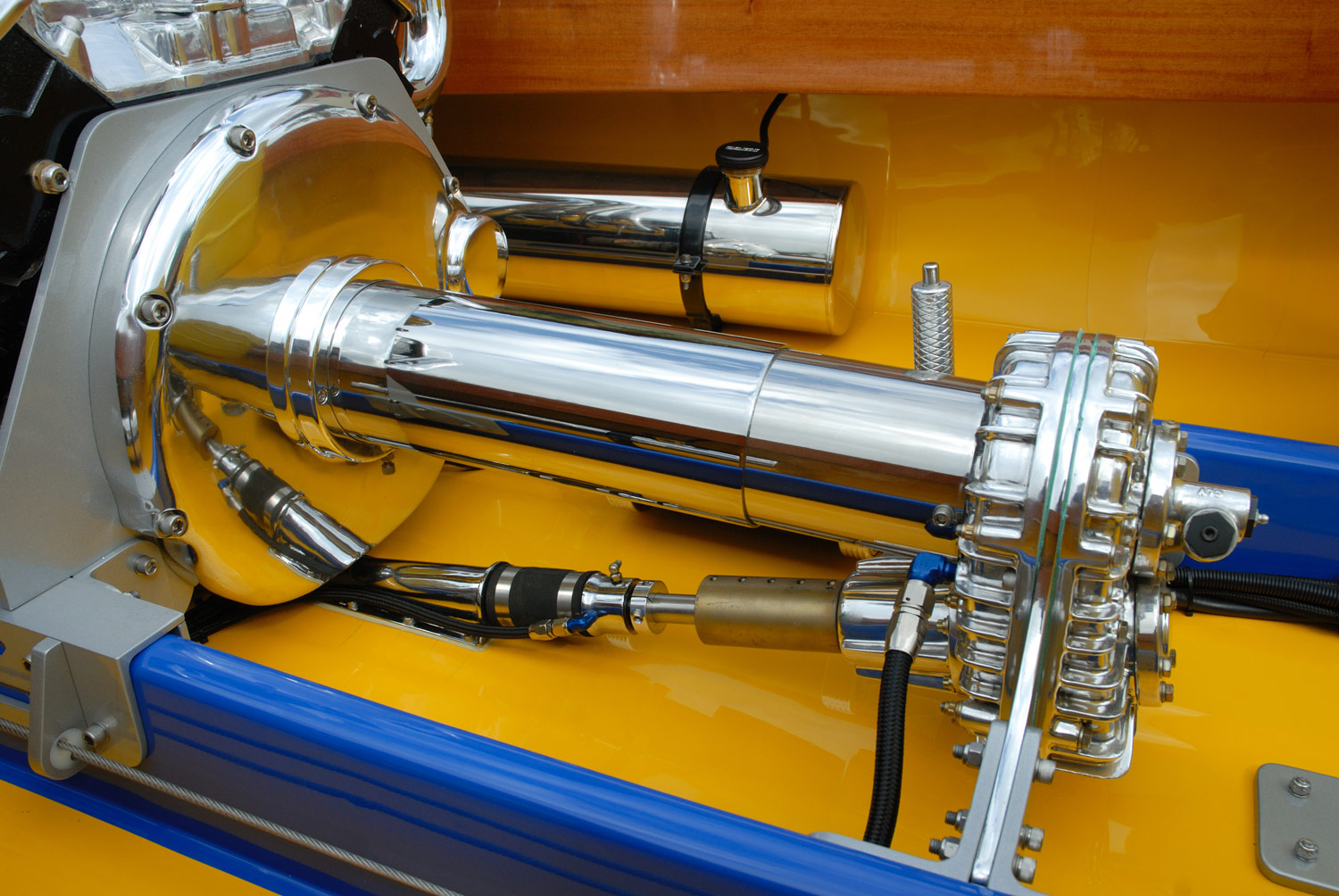 If you notice, the fuel tanks do not fill thru the deck but instead have filler necks and caps built into the tops of the tanks. Although the Coast Guard frowns on this, Ray said since this boat is really intended for display purposes only, he just couldn't bring himself to take a hole saw and cut into the beautiful wood deck and custom paint in order to mount conventional fuel fill hardware. 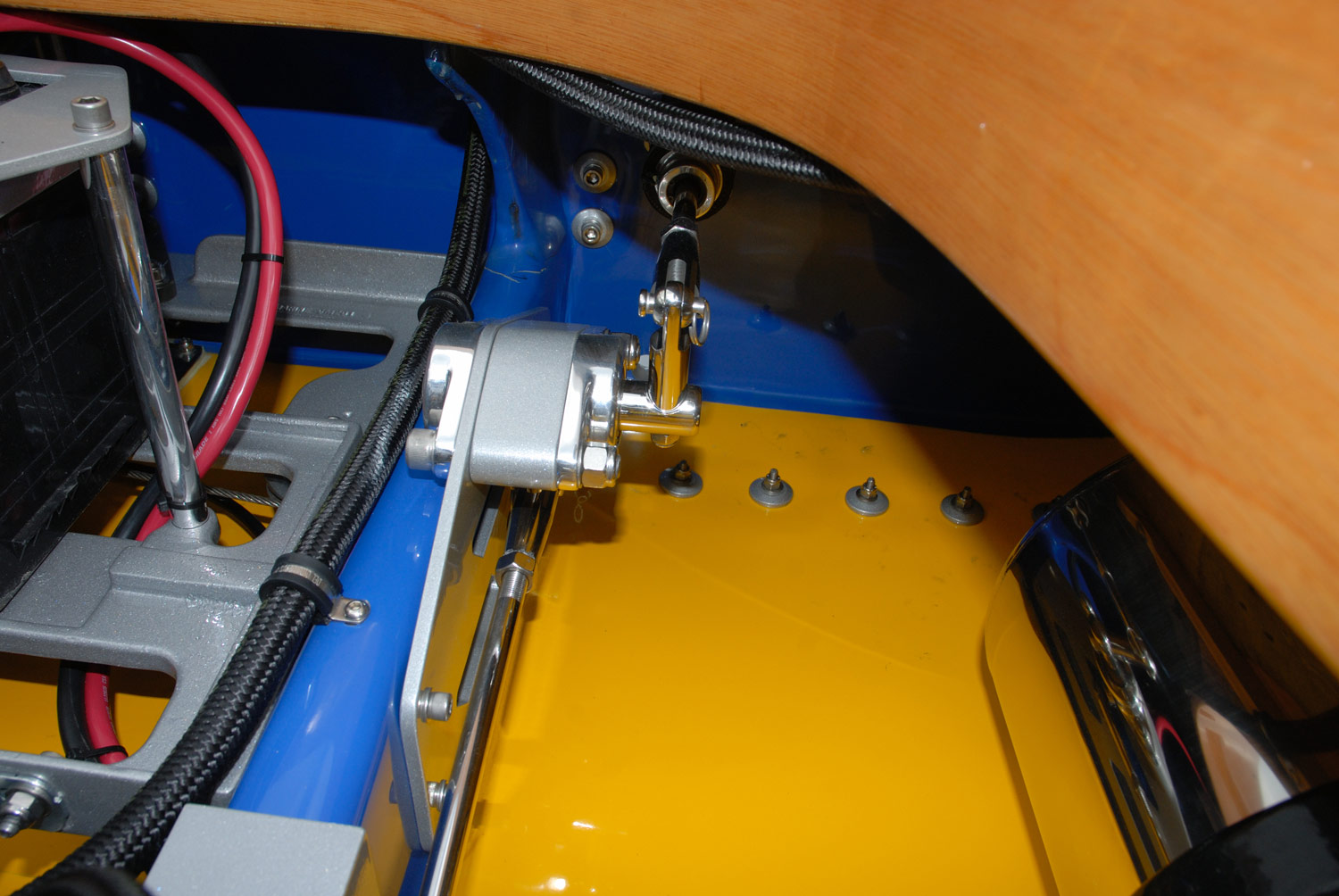 If you check-out the underwater gear and the cavitation plate assembly, it's old school too. 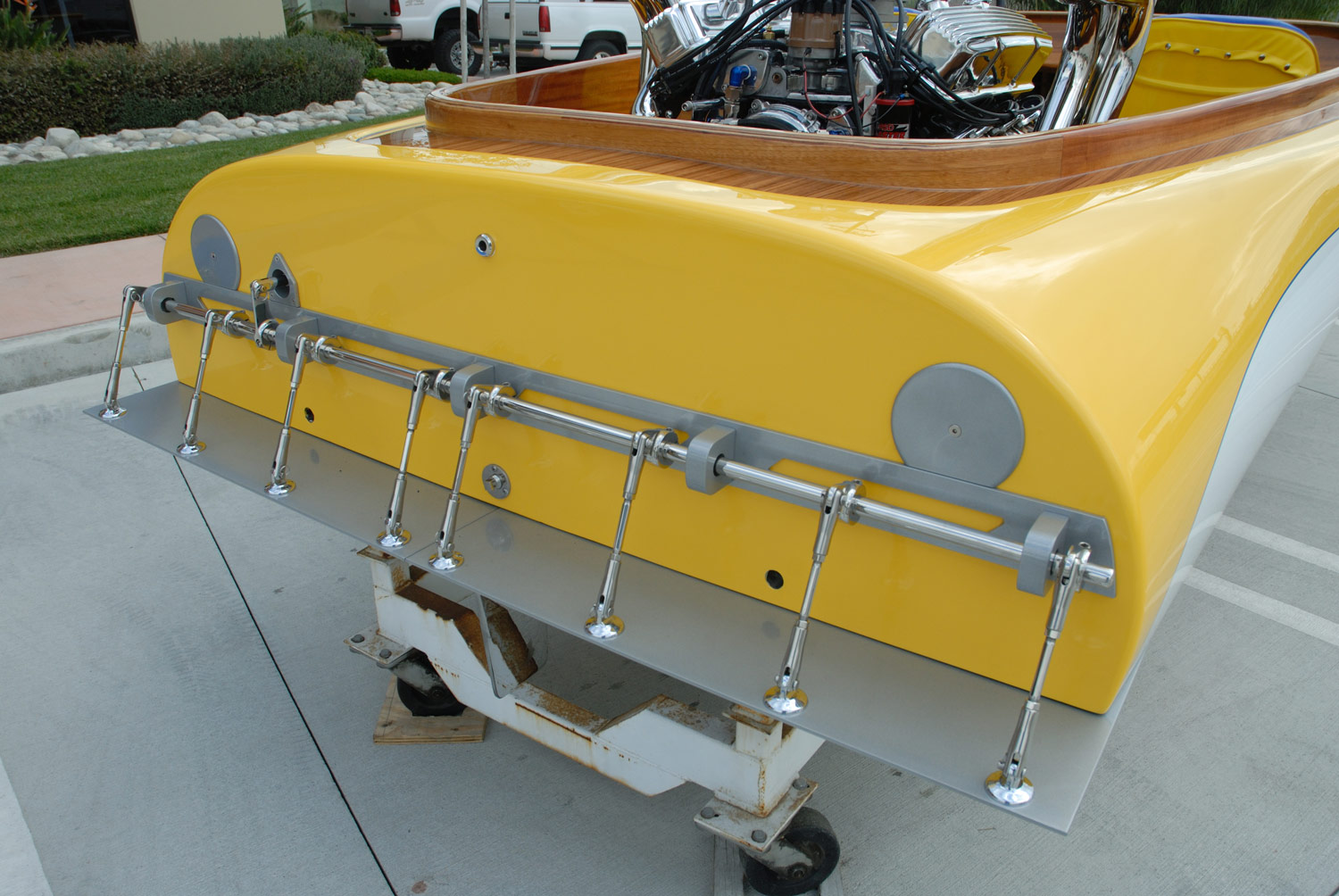 The strut and fins come from Harry Metzer and the cav plate hardware including bosses, clevis and turnbuckles are vintage Finishline Engineering. Another nice touch is the vintage Holman and Moody external oil cooler with the dual oil filters. This find was discovered up in the storage loft in an old cardboard box at the Hallett factory. About the only piece of new-age technology on the boat is a Moroso Accusump pre-engine-start oil system which makes sure everything inside that Ford V-8 is well lubricated before hitting the go button. 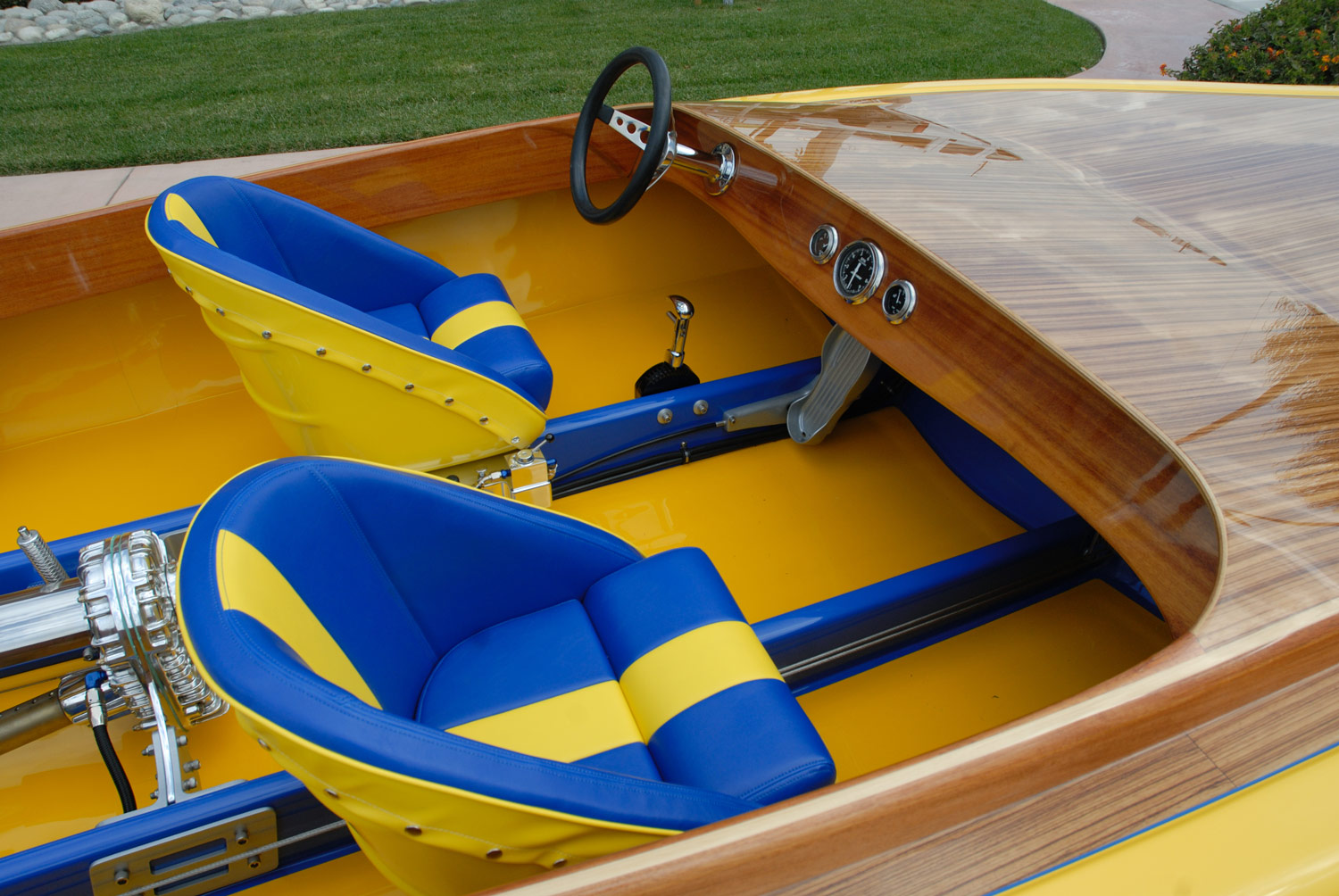 Nick decided to make this flatty a two-person rocket. Both bucket seats are made from fiberglass and gelcoated shells, and the stitch work was done by the
Hallett in-house upholstery department. 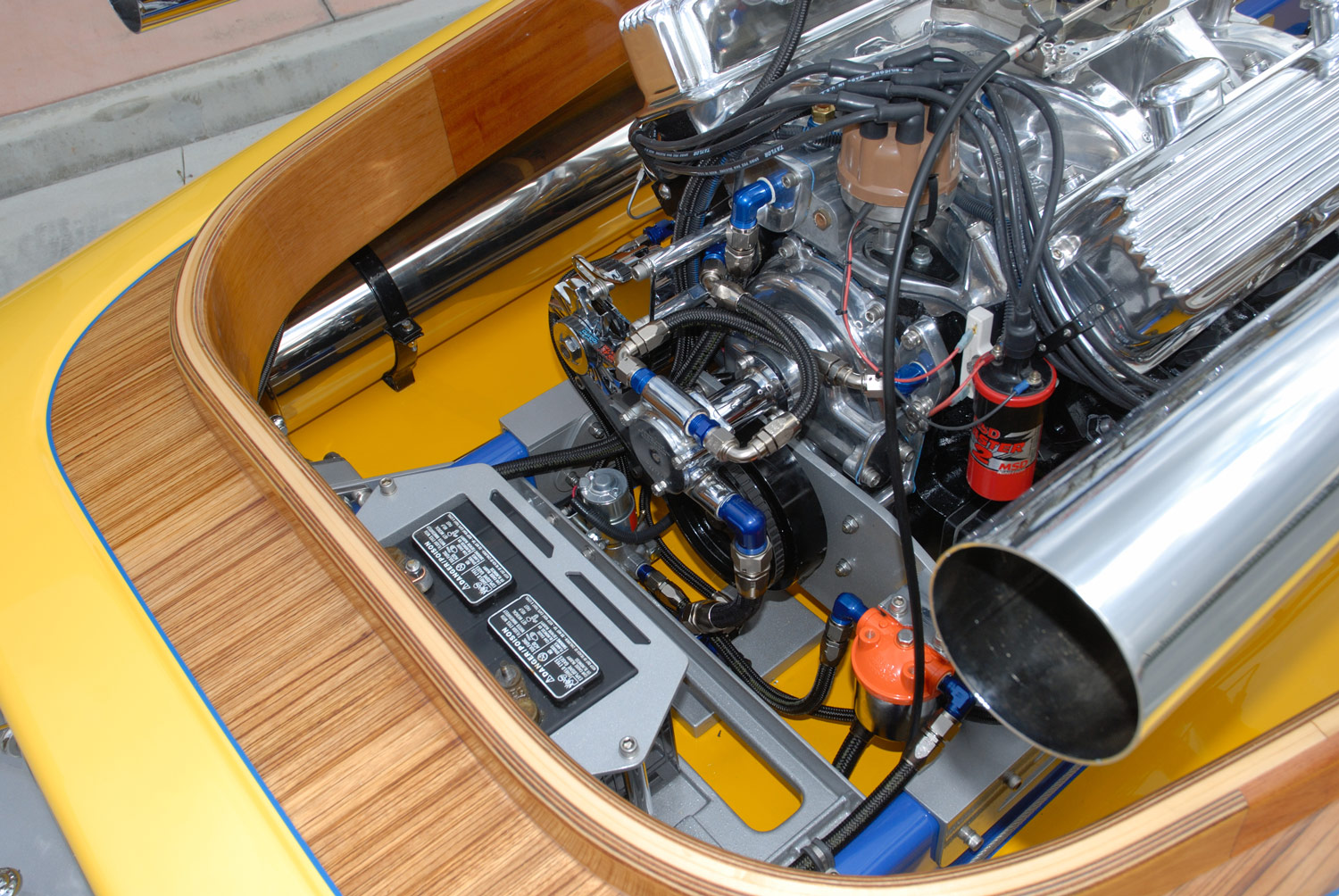 Anything in the boat that isn't polished or chrome has been powder-coated "speed-boat aluminum" which is a very attractive medium silver color with a hint of metallic fleck by Islands Powder Coating in El Monte.

Judging by the end result, Nick got what he was after; a flawless old school flatty built just the way they used to be, maybe only a little better.