If you own a boat with dual onboard fuel tanks, you understand the problem. How do you switch from one tank to the other? Most boats with more than one tank come standard equipped with a very basic manual 4-way brass selector valve which often is located in some obscure and hard to access place in your engine compartment. 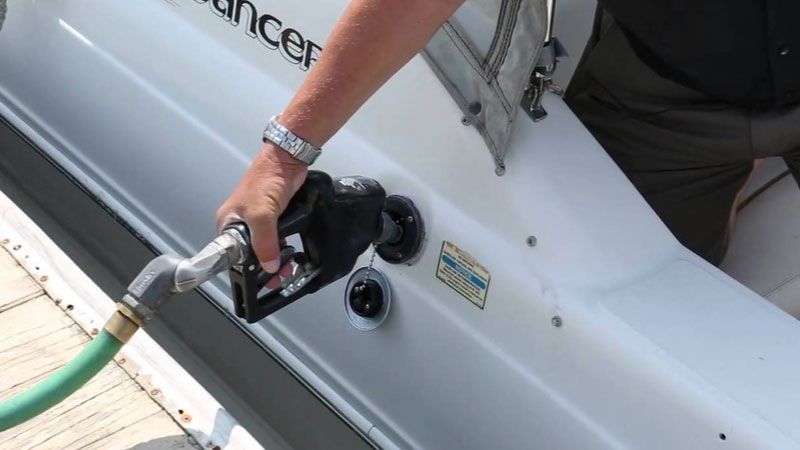 Assuming that you're an alert driver and have two helm mounted fuel gauges (one for each tank, or a switch that allows you to read both tanks off one gauge) to monitor usage, keeping an eye on the descending gauge is just part of the normal boating routine. And when it’s time to switch over to tank number two, it’s stop the boat, turn off the engine, scramble to the engine compartment, be careful not to burn yourself on some hot engine part and turn the valve to the back-up position. Obviously, not the most convenient way to execute what should be a much more seamless maneuver.

But there is a better way. In fact, it’s been around for nearly twenty years; IMCO’s SuperFuel Valve, a safe and reliable accessory that takes all the manual labor and guesswork out of fuel tank selection.

The SuperFuel Valve has lots of feature/benefits, but number one on the list has to be the fact that it’s designed, manufactured and tested to meet U.S. Coast Guard Requirements (SAE J1171) for a marine electric fuel valve device. Granted, there are other automotive style electric fuel valves on the market which are less expensive but they don’t have equivalent flow capacity (small ¼-inch I.D. openings in most cases) which is essential for high performance applications and they don’t meet marine industry standards for safety or construction. IMCO’s SuperFuel Valve is capable of delivering up to 250 gallons per hour at a maximum PSI of 400 to fuel hungry engines. The SuperFuel Valve also is a true ball valve construction which means there is no narrowing of the internal half-inch I.D. orifices to restrict the system. Fuel fittings on the unit for incoming and exit lines are also generous half-inch I.D. (-8 AN)

A couple of additional features of the SuperFuel Valve that should not be overlooked are its repairability factor (all internal parts are replaceable should a mechanical breakdown occur) and the fail-safe manual mode of operation in case of an onboard electrical failure. Unlike other common solenoid-valve devices, the SuperFuel Valve has an external lever on its faceplate which may be moved by hand by removing a spring-loaded pin to switch from one tank to another in the event of a power outage.

For the do-it-yourself boater, installing an IMCO SuperFuel Valve couldn’t be more simple. The unit requires only four screws or bolts to attach to a flat bulkhead. There’s also a pre-made wiring harness that comes with the system with clearly marked labeling on the unit faceplate telling you exactly where each wire attaches to the appropriate connector. And just to make sure you don’t have any questions, IMCO also provides a very detailed fuel line and wiring diagram with each unit. Depending upon the ease of accessing your boats’ wiring harness for electrical hook-up and possibly needing longer fuel lines to accommodate the placement of the SuperFuel Valve body, normal installation should be in the 1 to 1-1/2 hour range requiring only basic hand tools.

To activate the SuperFuel Valve, any six-prong two-position toggle or rocker switch is able to handle the on-dash selection function. There are numerous switches available, many of which are already labeled with “port and starboard” identification so you know which tank you’re pulling from.

Depending upon which IMCO SuperFuel Valve model you require, there’s the standard 3-port model for most applications and a slightly larger 6-port version for special EFI engines needing return lines. The 3-port model retails for around $570.00 and the 6-port goes for about $725.00 and both can be purchased online at www.imcomarine.com. 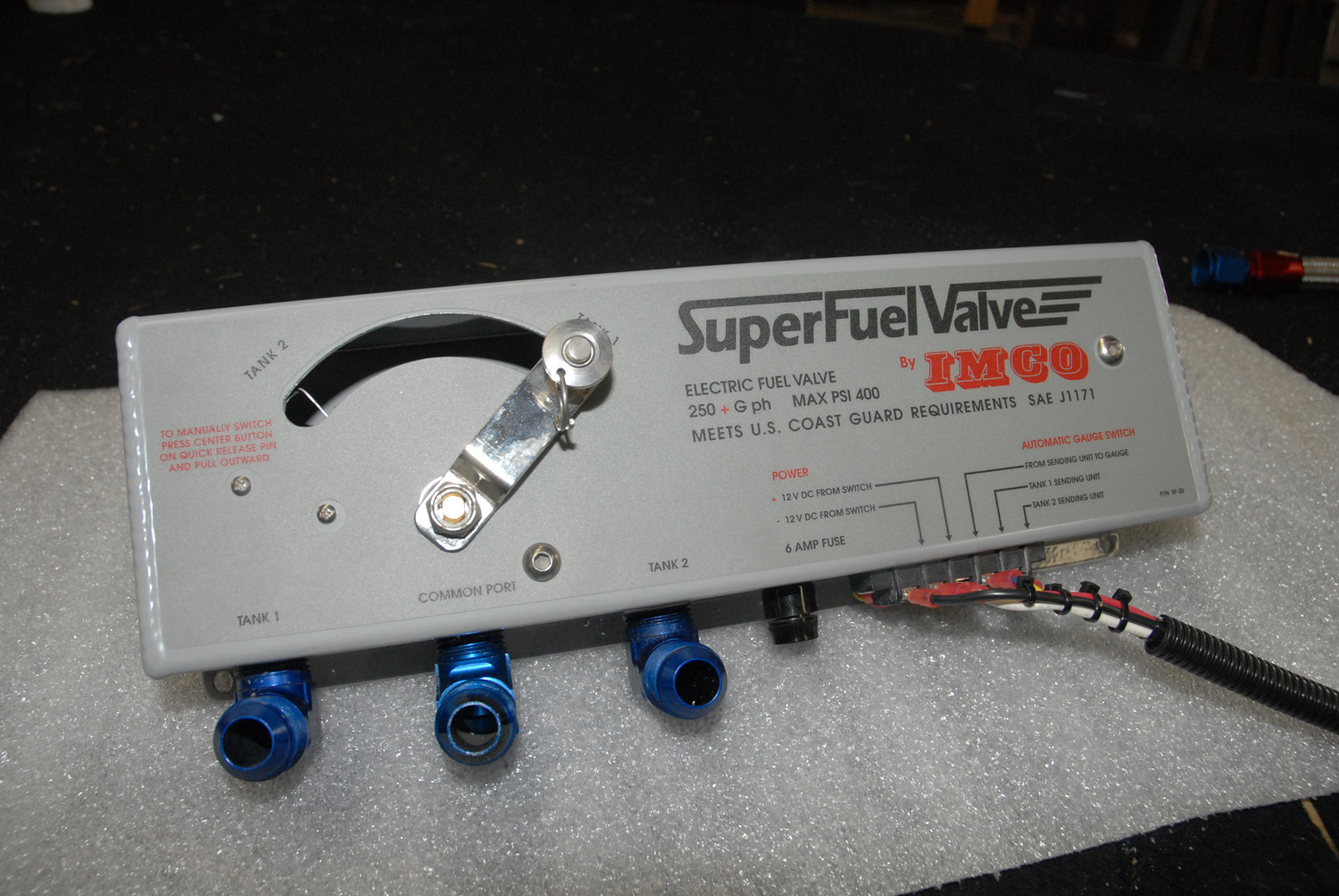 IMCO’s SuperFuel Valve is a compact, one-piece unit. Shown here is the popular 3-port model to accommodate two incoming fuel lines from two separate tanks and one exit line feeding the fuel pump and then the engine. With a flow capacity of 250 gallons per hour, this auto/electric fuel selector is able to deliver ample fuel for even the highest output performance engines. 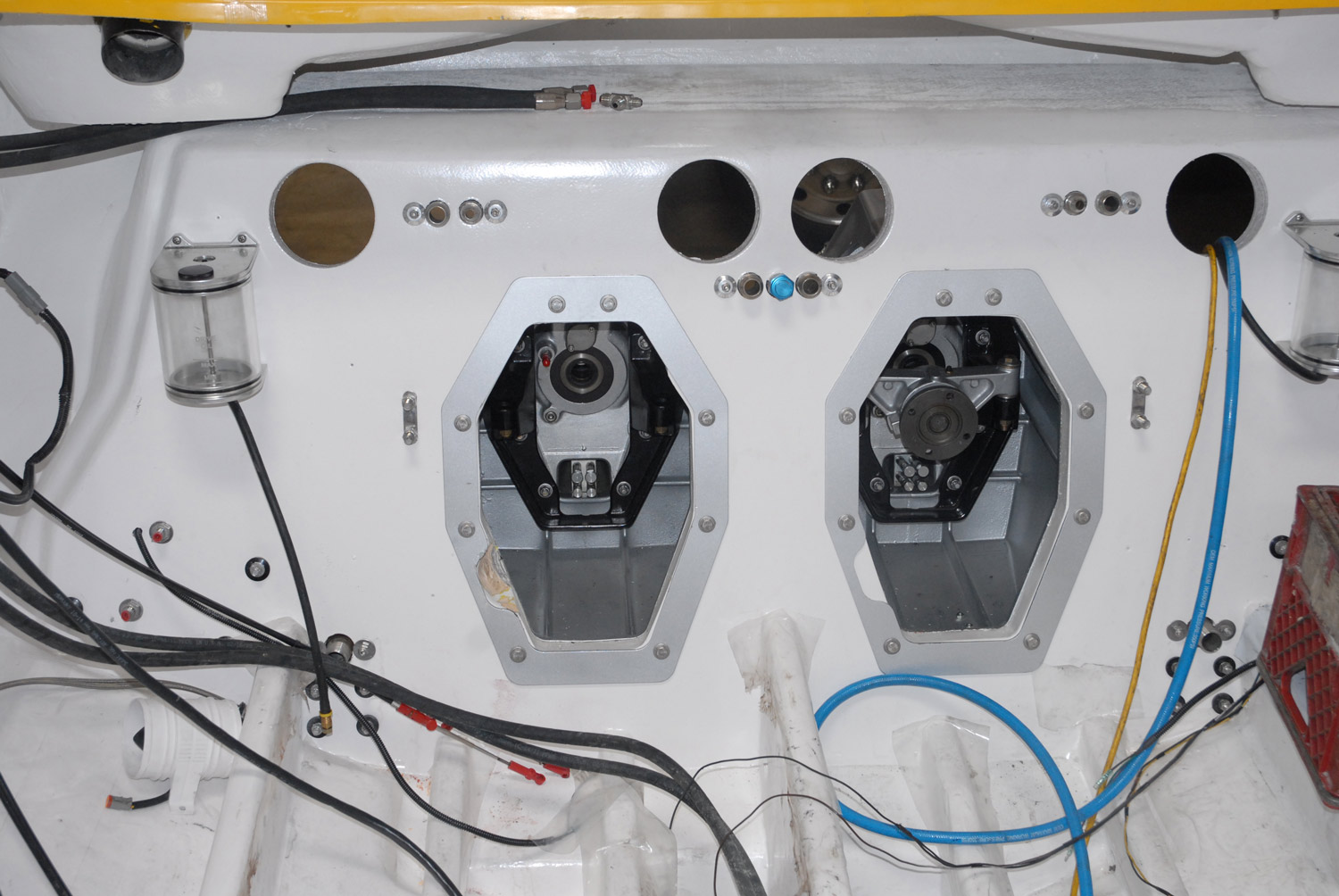 Our sample installation was done on a Nordic 42 Inferno vee-bottom which was in the process of being re-rigged with new engines and a pair of IMCO’s new SCX-4 surface drive units. Here, the engine compartment has been gutted awaiting the install of new power. There is ample available transom and/or bulkhead space to mount the new SuperFuel Valve body which is approximately 12” x 4” in physical size. 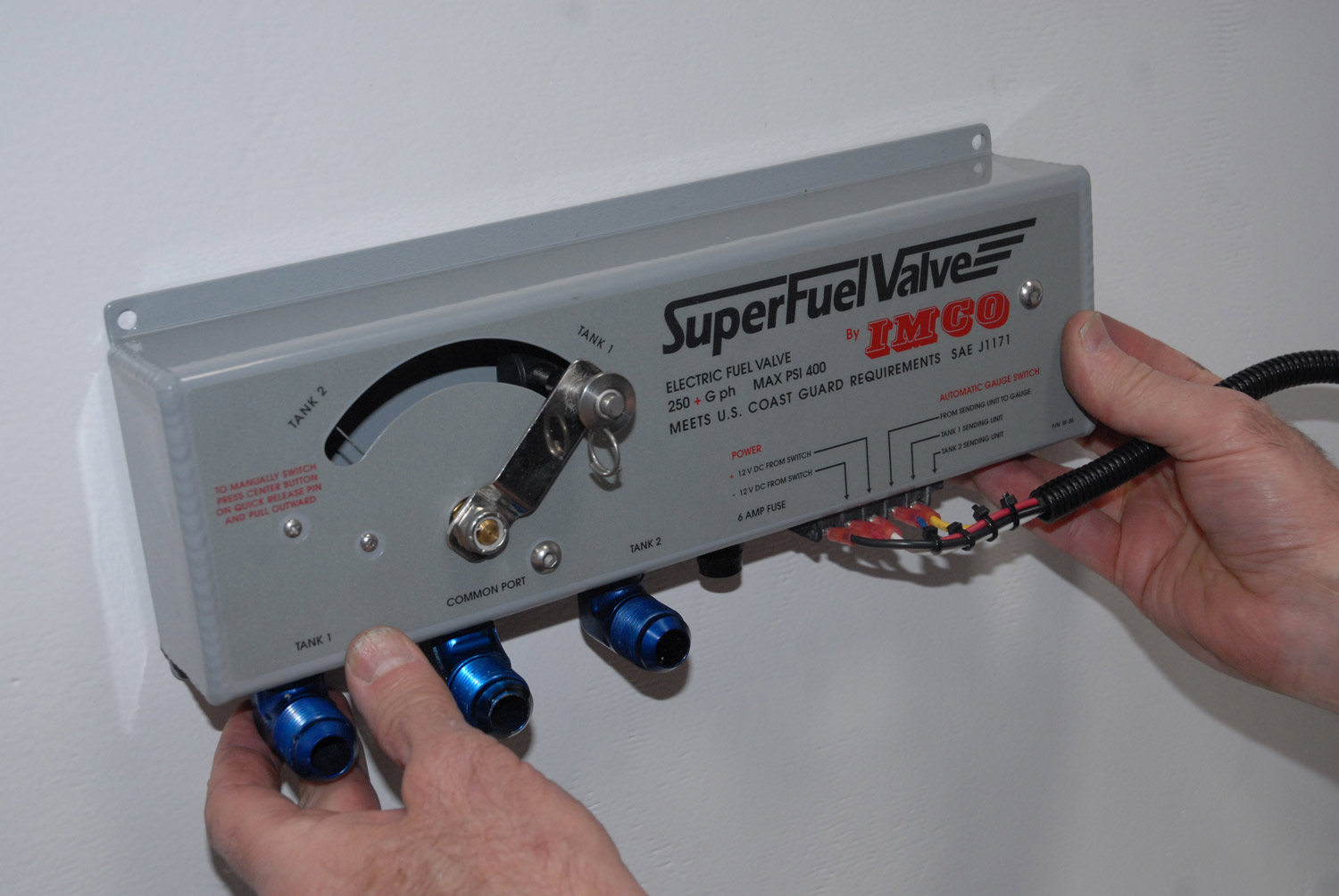 The first order of business is to find the optimum flat surface to mount the SuperFuel Valve. The location should be within a reasonable distance from both fuel tanks so as to avoid running excessive lengths of hose from the tanks to the unit. It’s also a good idea to keep the SuperFuel Valve as close to the engine fuel pump(s) as possible. 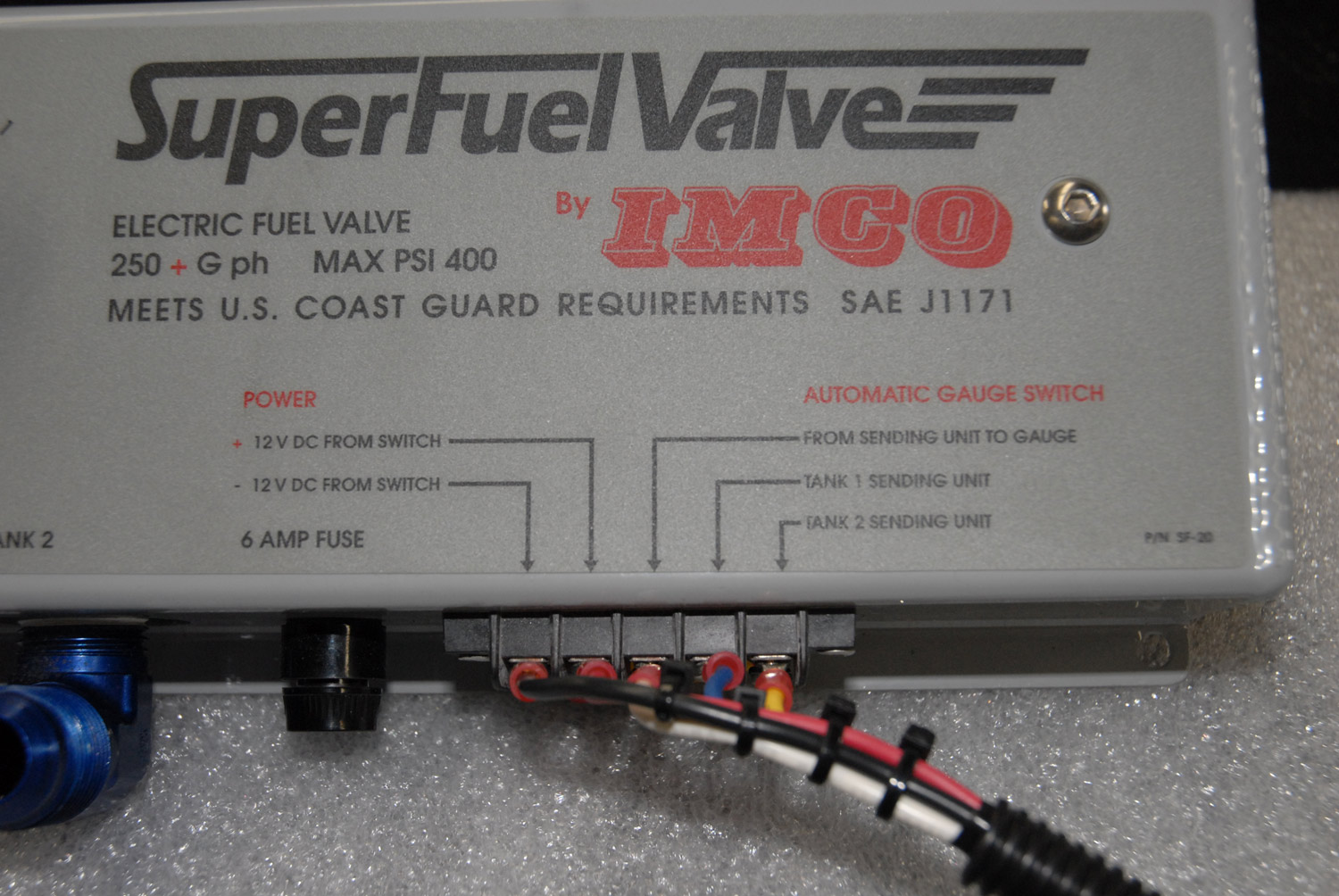 If you’re worried about not knowing the correct wiring pattern for the SuperFuel Valve, IMCO has eliminated that concern. Each connector and where it goes is clearly marked on the surface of the faceplate. 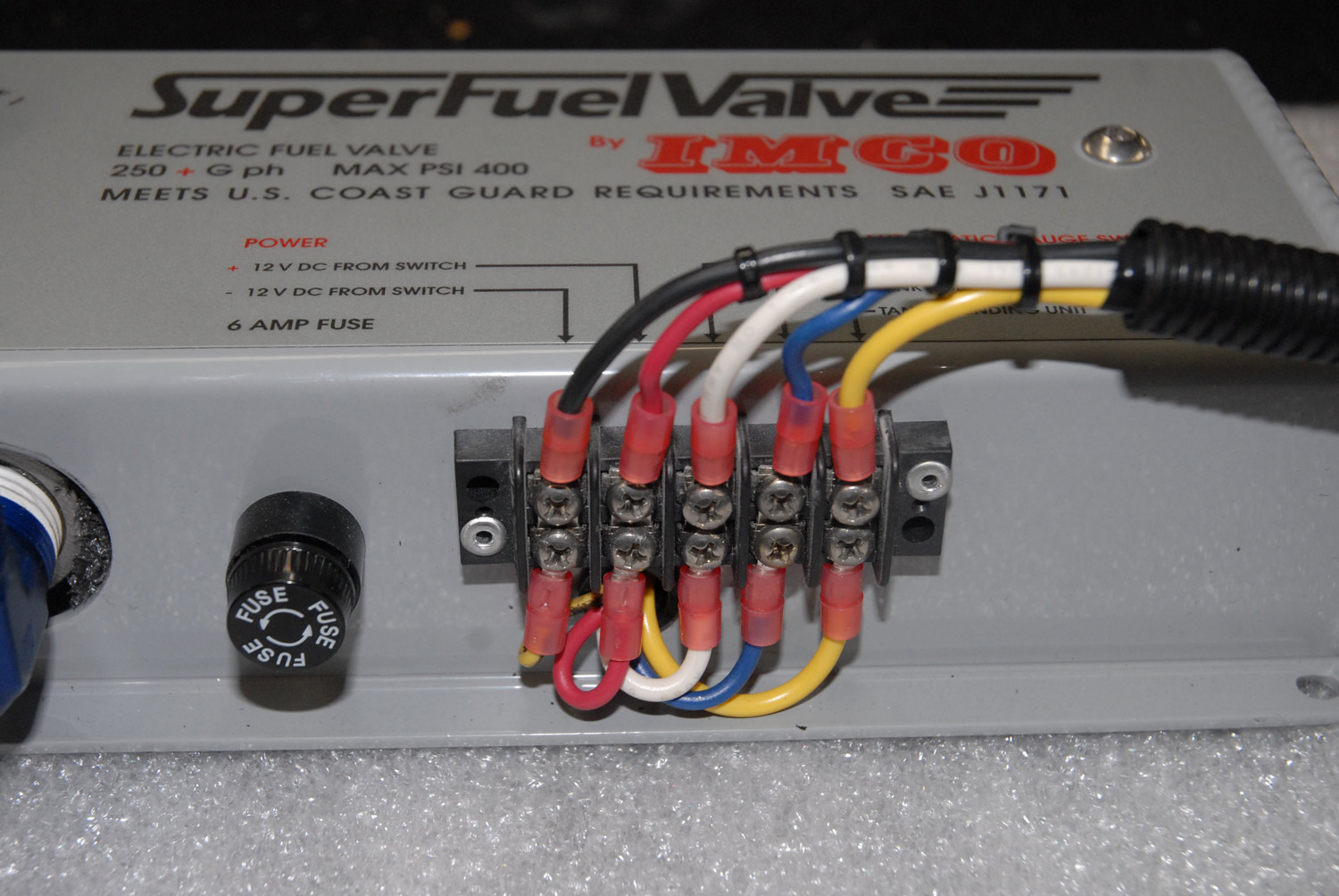 As an additional installation aid, IMCO’s wire harness is color coded red, black, white, blue and yellow and a detailed diagram is provided with each unit for electrical and fuel line connection. Also note that the valve body has a 6amp fuse for added protection. 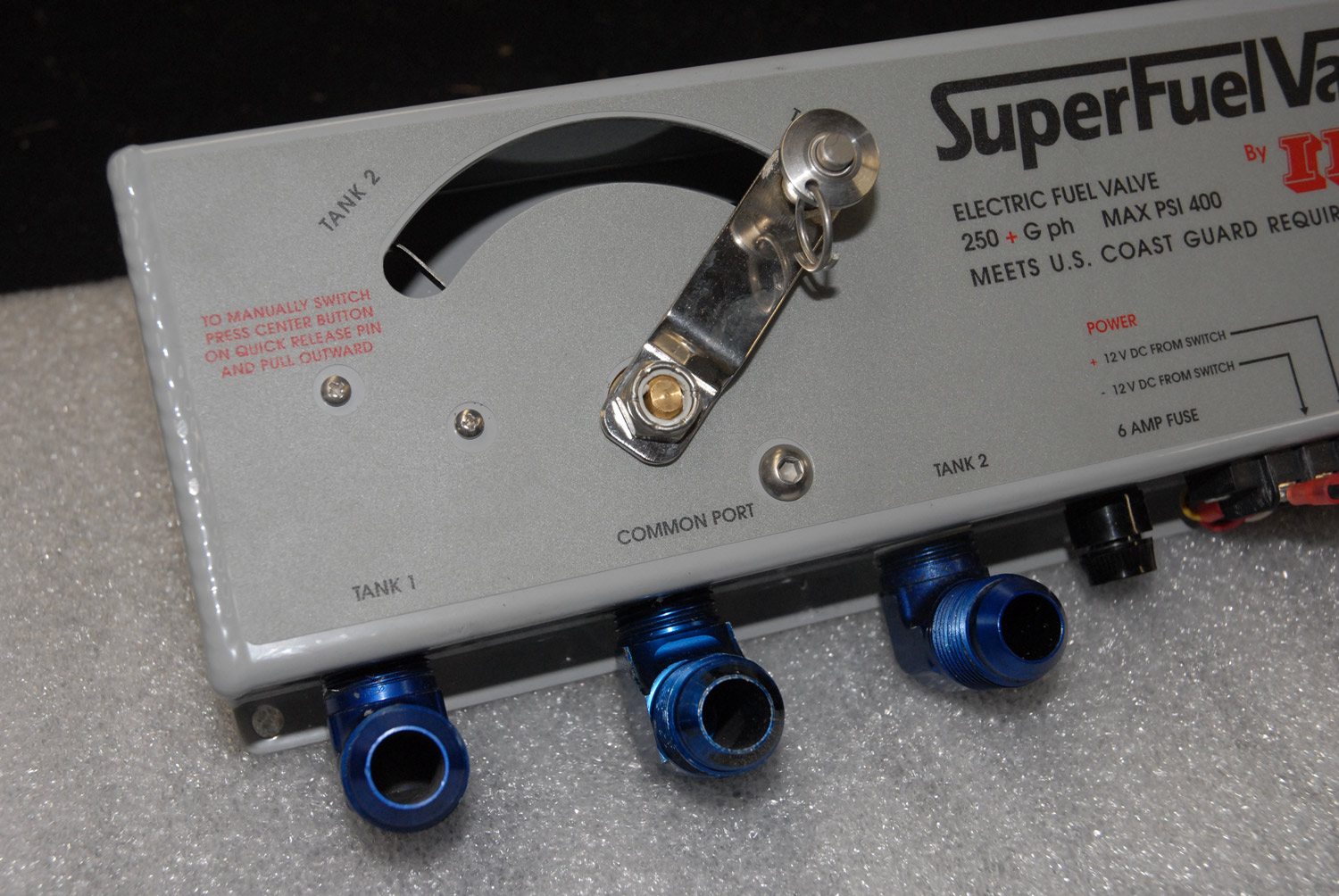 In case of an onboard electrical malfunction, you can still manually switch from one tank to the other. All you have to do is remove the spring-loaded pin from the chrome external lever and move. The fuel ports (2 intake and 1 outflow) will accept standard half-inch brass fittings (90 degree elbows most commonly used with push-on hose ends). If you use the push-on type, don’t forget to double clamp them. If you want to go a little more upscale, anodized aluminum AN fittings with stainless braided hose is always a nice custom touch. 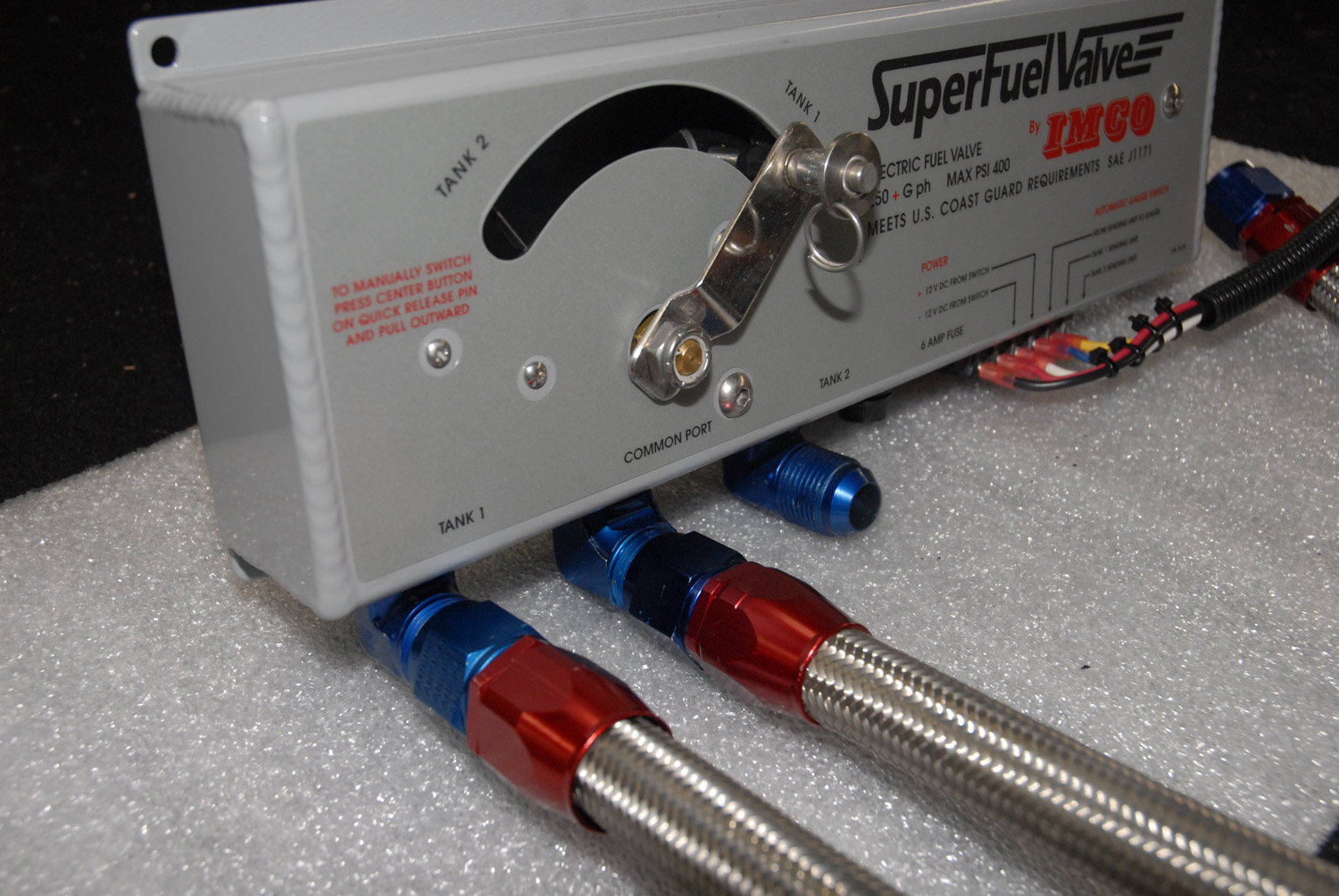 Once you’ve decided on the location to mount the SuperFuel Valve body, go ahead and measure out the length of hoses needed and secure them to the two intake port fittings. Attaching the SuperFuel Valve body requires nothing more than four corner screws or bolts. Then it’s just a matter of splicing into the boat’s existing wire loom for power. 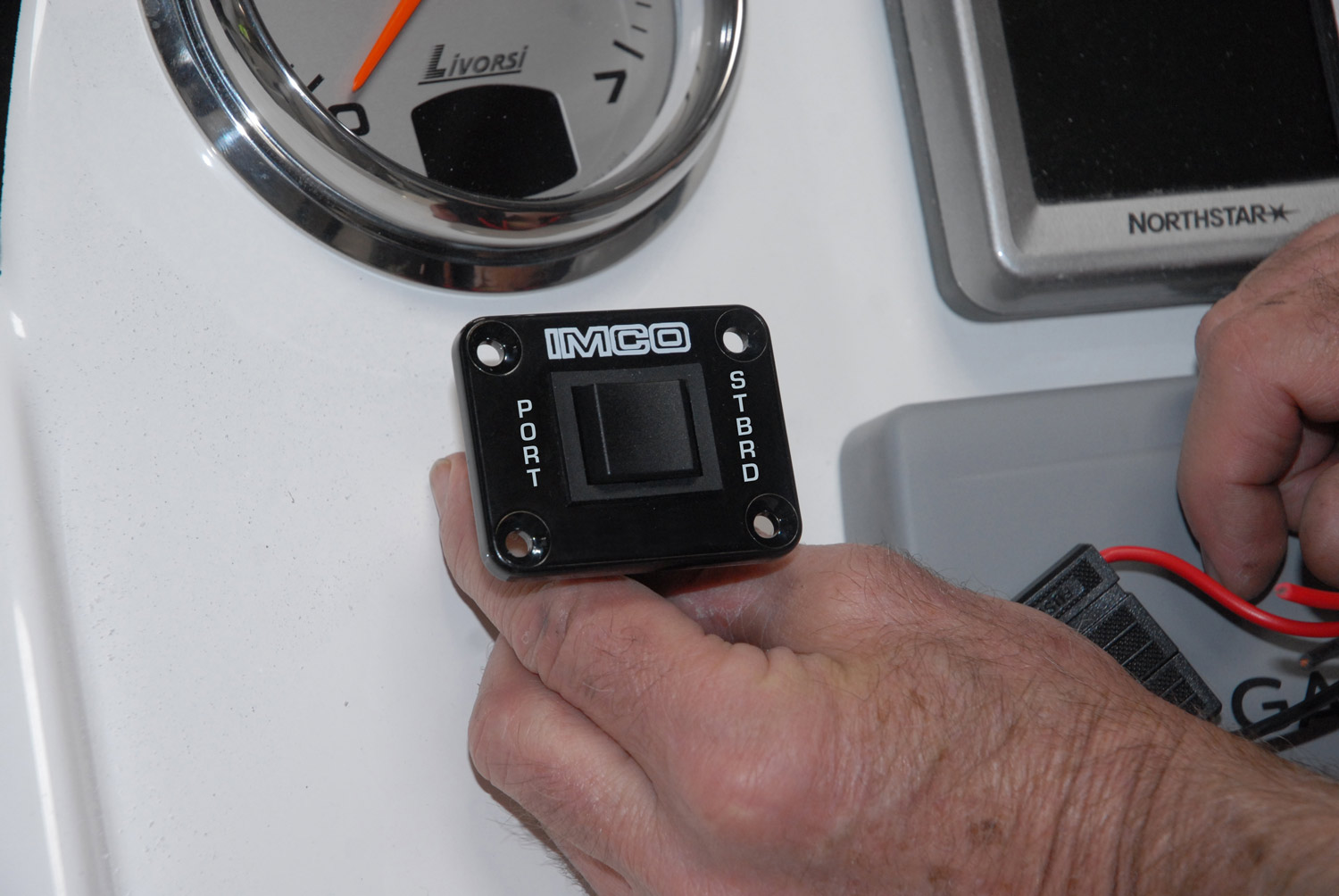 At the helm, a standard two position marine rocker or toggle switch with a 6-prong connector backside is all that is needed to complete the installation. Various switches of this type are readily available, many with labeling of port and starboard to easily designate which tank is activated. Depending upon your instrumentation package, you can either use a single fuel gauge that monitors both tank levels according to which tank is selected, or you can run twin fuel gauges, one for each tank independently. 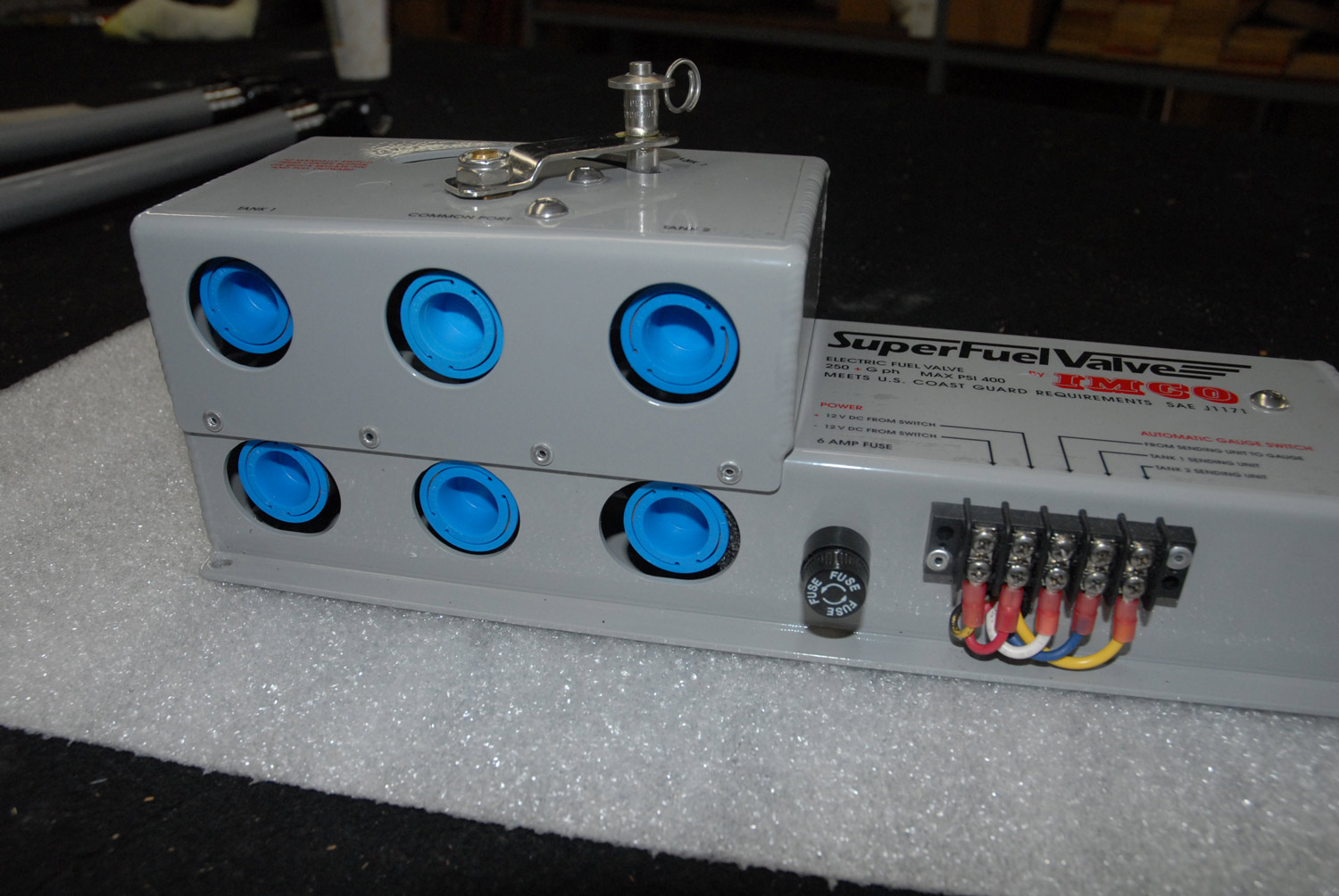