Article Gallery
So far we’ve posted articles about the importance of finding the correct X-dimension for optimum stern drive performance followed by general propshaft position savvy. In a way, it’s kind of like the ‘three bears’….too high is not good…..too low is also not good, and somewhere in the middle is probably just right.

Unfortunately, adjusting the X-dimension and propshaft height up or down on a stern drive rigged boat is not that easy and it’s usually expensive as previously discussed. Not so much, however, with an outboard since its vertical mounting position isn’t dependent on the location of an inboard engine. 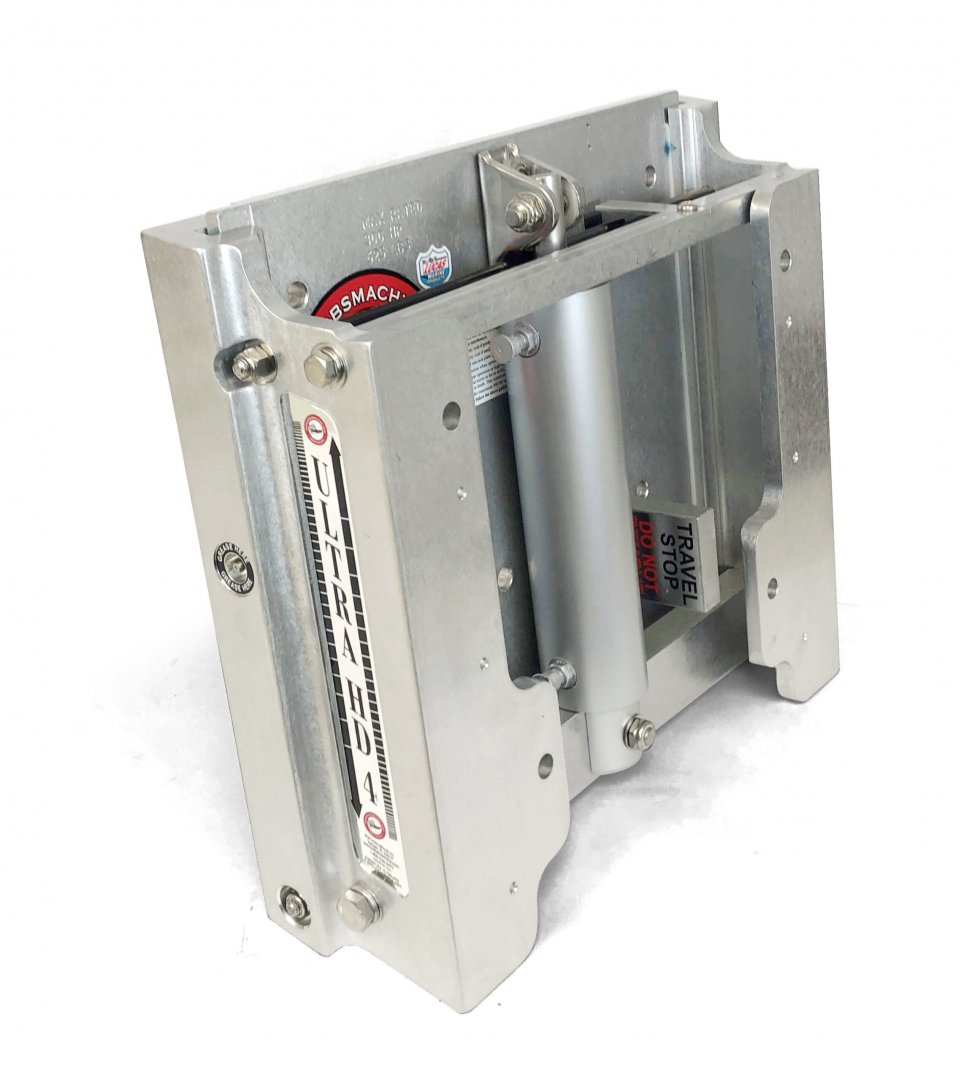 Sixty years ago outboard transom brackets and jackplates were pretty much unheard of. Back then, hulls intended for outboards had a molded stern well which created adequate clearance allowing the outboard to be manually tilted full up into the trailering position. Life was simple back then.

It wasn’t until about 1976 when outboard brackets suddenly became a much greater necessity, created by the advent of the V-6/200 HP outboards debuted by OMC (Johnson, Evinrude) and Mercury. Somehow in their vast marketing strategy, however, the outboard makers neglected to survey what hulls were available to accommodate/rated for this significant jump in two-stroke power. There were very few except for some larger (22’ and over) center console vee-bottom fish boats. 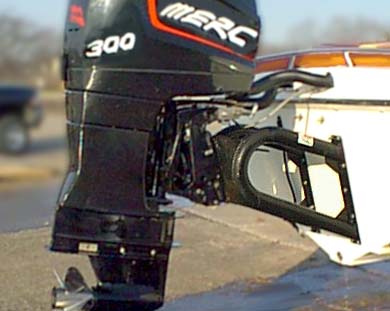 But, the old saying, “ necessity is the mother of invention” came to the rescue. The most pro-active performance aftermarket marine products company at the time was Gil Marine who immediately recognized the dilemma and came up with a solution for all those flat, no-well transoms meant for stern drives. The iconic Gil Bracket was born. Probably a little crude looking by today’s standards, but the welded rounded steel tube framework with ‘Gil-Coat’ (a type of powder coating) did the trick, allowing almost any hull regardless of transom configuration to accept outboard power options.

The primary deficiency of the original Gil Bracket, however, was the fact that it didn’t allow for easy vertical height adjustment. The mounting flanges on the bracket had several sets of holes so an outboard could be positioned in one-inch vertical increments. Still, you needed some type of overhead hoist (or three or four very strong friends) to hang the engine while deciding which set of holes delivered the best propshaft height.

The other limiting factor was that Gil Brackets originally came in only a couple of set-backs, most popular were the 13-inch and 24-inch models depending on the intended application. Hulls under 22’ usually chose the smaller set-back model while larger center console vee-bottoms would use the 24” version, and occasionally a bracket was built to accommodate multiple engines.

The primary benefits to brackets with a set-back are two-fold. First, by moving the propeller farther aft behind the transom, the prop and gearcase are operating in cleaner, ‘more solid’ undisturbed water improving potential thrust. The other advantage is greater trim leverage. In most applications, moving the propeller farther behind the boat makes the boat more responsive to trim angle adjustments of the engine. 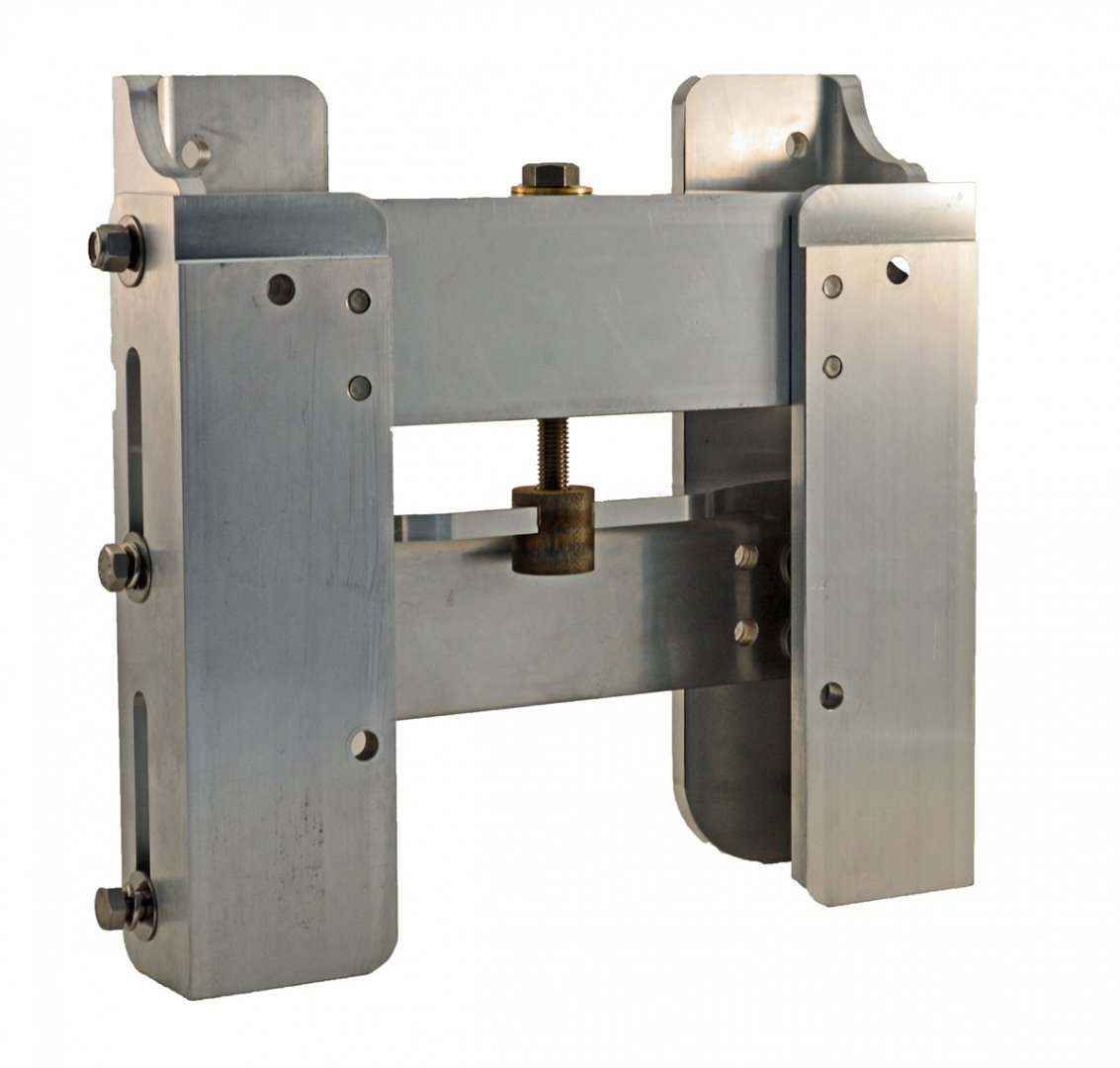 Since then, outboard brackets and jackplates have become far more sophisticated. The first breakthrough was the manually adjustable jackplate using a central machine screw that vertically slides the mounting plate up or down on side rails. A pretty simple device needing only a couple of open-end wrenches to make adjustment.

A little later, that wasn’t good enough for some performance enthusiasts who wanted to manipulate engine (propshaft) height on the fly. This required incorporating an electric/hydraulic cylinder/pump to the jackplate that was controlled by a remote switch on the dash. Depending on the model of jackplate, vertical up or down travel could be as much as six inches. 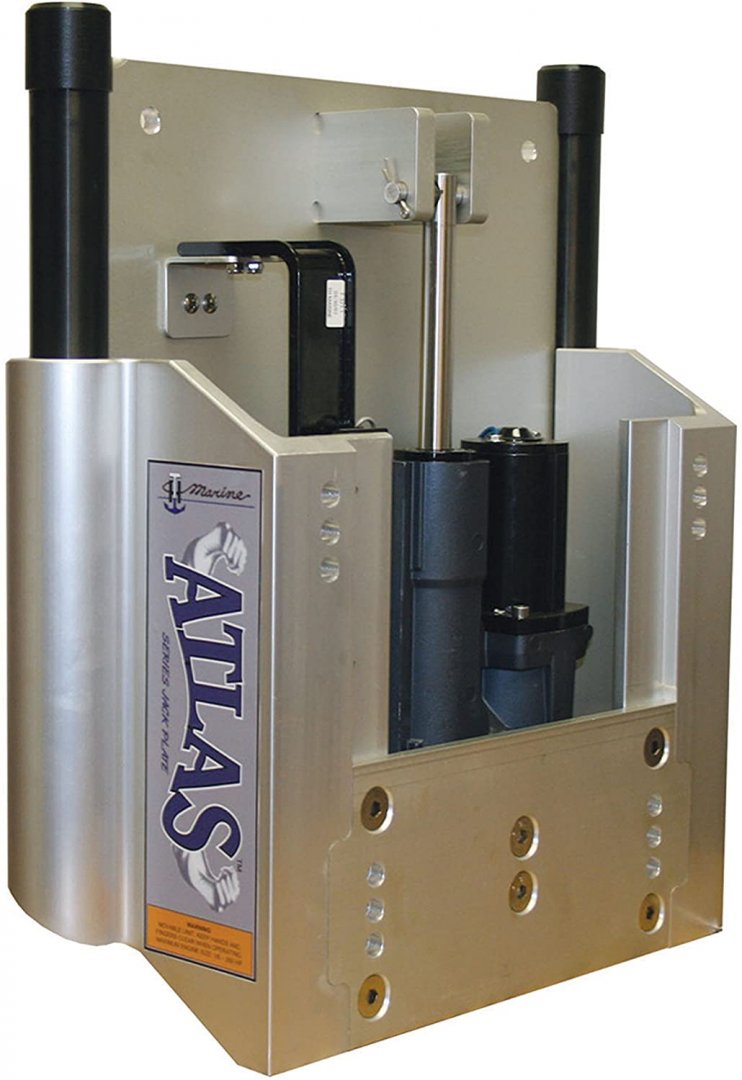 Today, there are a number of jackplate brands on the market including enclosed brackets with built-in swim platforms, most commonly seen on center console fish boats. 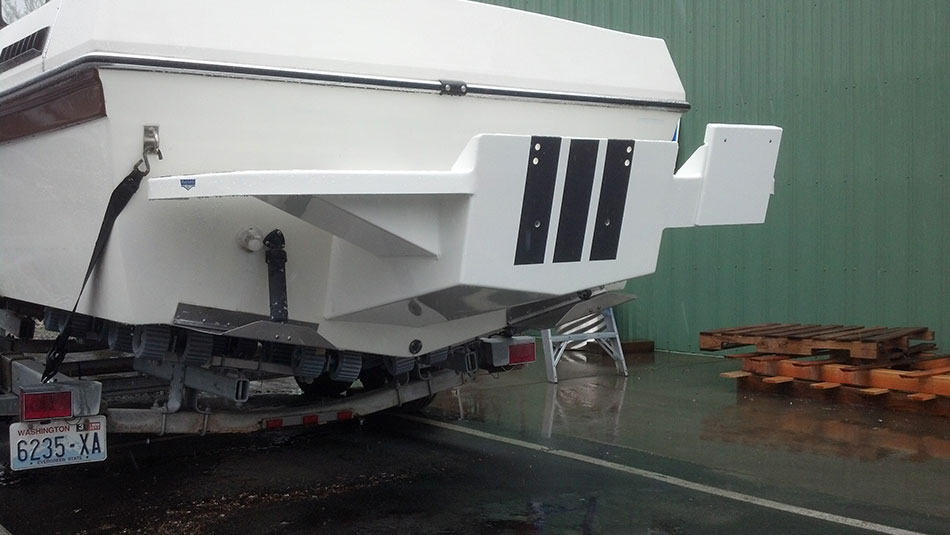 All brackets and jackplate are similar in design and function but each has its own set of specific features. When choosing a jackplate, two factors standout. First, make sure to determine how much horsepower and weight the jackplate is rated for. Second, check the model specs and notice how much ‘set-back’ from the transom the jackplate creates. This can be anywhere from four-inches to more than twenty-four inches. You may want to consult with someone knowledgeable about your hull and horsepower to make the best possible selection of set-back
. 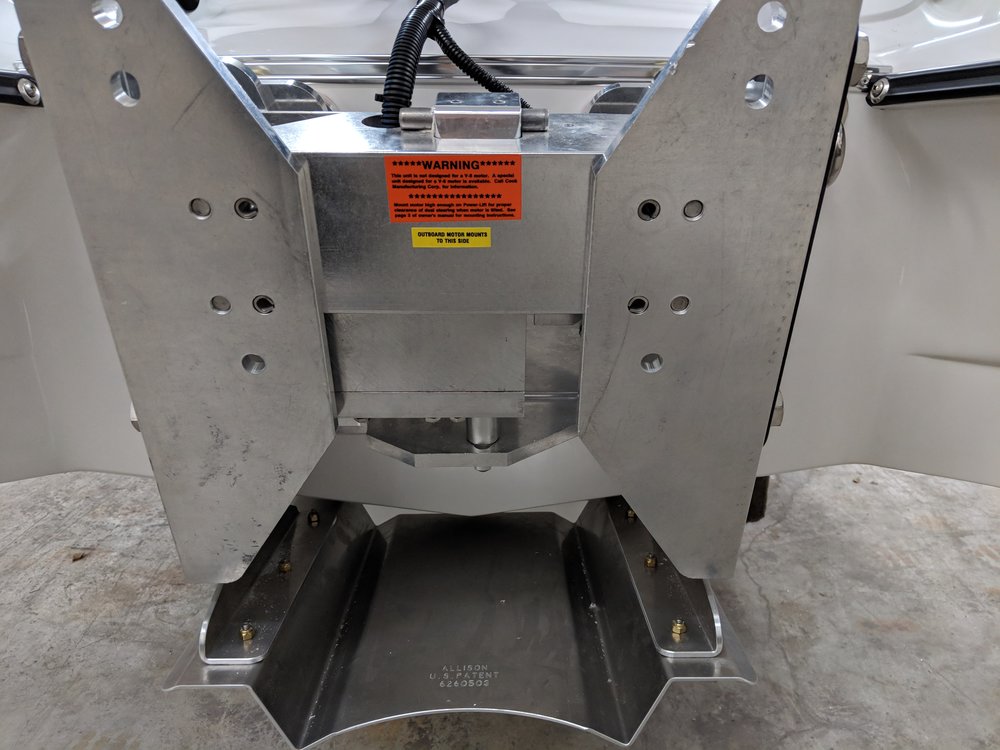 Okay, so why would you want to have a jackplate for your outboard? The answer is more performance versatility and increased ability to operate in shallower water. It’s common knowledge that raising the engine (gearcase) higher out of the water is going to increase speed and efficiency in most cases. The lower unit gearcase is a lot like a big anchor being dragged through the water. It naturally creates resistance and slows a boat down. The more gearcase you can remove from the water the better until propeller efficiency begins to diminish.

With an adjustable jackplate, you can lower the propshaft position at low speeds for improved maneuverability and a stronger/quicker hole-shot avoiding ventilation when getting on plane. As speed increases, the ‘up’ button will raise the engine/propshaft to a more efficient (less drag) position.

There are some things to remember when using a jackplate at speed. First, be aware that going ‘higher’ may have consequences, especially for the cooling system. Outboards most commonly intake cooling water through the side holes in the lower portion of the gearcase. If the engine is raised higher, these water intake holes come closer to the surface thus reducing both the pressure and flow of available water to cool the engine. A couple of things will help avoid this potentially serious issue – install a water pressure gauge where the driver can visually see what’s going on. If pressure suddenly drops, the engine is too high and the gearcase water intake holes are inhaling more air than water. If that happens, immediately reduce rpms and lower the engine a couple of inches. At the same time, monitor the engine temp gauge to see if it is exceeding the recommended operating temp range of the engine. Again, lowering the engine is your best immediate course of action. 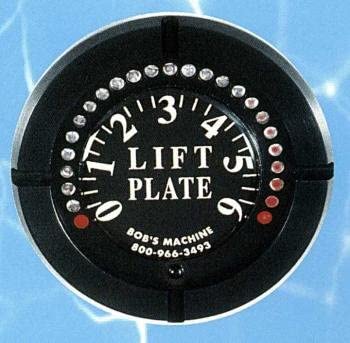 If you’re new to a jackplate, it’s always best to take things a little at a time. Finding the optimum setting for a high speed run isn’t always easy. To get more tuned in to what works and/or doesn’t work, it’s a huge benefit to have a separate trim/vertical height gauge dedicated just for the jackplate. Some jackplate manufacturers offer electronic gauges for their plates which mount on the dash, but are usually considered an optional accessory. If you are okay with ‘old school’, a Morse 33C cable works just fine as a strictly mechanical gauge to go by.

If you are unsure about what height to install your jackplate, and what vertical range it should cover, here are some ballpark numbers to help as a general guide. Assuming you’ re interested in more top end speed, remember that for every four to five inches of set-back, the engine will need to be one-inch higher than it would be if mounted flat on the transom.

Let’s assume that the jackplate you’ll be using has six-inches of total vertical travel. That’s a lot, and probably won’t need all of it. And, it has a set-back of about ten-inches. This amount of set-back means you’ll want the propshaft height to be approximately 1-1/2” to 2” higher compared to where it would be if mounting the engine directly to the transom with no jackplate.

Normally when you mount an engine with a jackplate, you’d like to have the neutral position of the sliding plate with about two-thirds (4 inches up) left for up and 2 inches for down (6-inches of available total travel). Without going too extreme on the set-up, the propshaft height in relation to the bottom of the keel (hull) should be around 2-inches below the bottom (remember we are also taking into consideration the ten-inches of jackplate set-back). In the full up position, the propshaft is about two-inches above the bottom of the boat (a semi-surfacing condition) and about four-inches below when the jackplate is in the full down mode.

These are just approximate ballpark suggestions, and a lot of other factors come into play when dialing-in the ideal set-up like propeller selection, overall weight distribution, bottom configuration, etc . Regardless, adjustable outboard jackplates are a cool performance upgrade worth having.
Reactions: Sigus, 94Nautique, Bajastu and 4 others