Article Gallery
A little over 3 years ago I stumbled upon a group on line named the ‘Lower River Outboards’. Having always loved the lower portion of the Colorado River down near Yuma, I was very curious what they were about. A short time later they had posted a ‘Lower River Run’ event that was to take place out of McIntyre Park in Blythe CA. The destination was Fishers Landing near Lake Martinez some 60+ miles down river, with a mid-way fuel stop at Walters Camp. I had never ran that much of the river, let alone in one day, so I reached out for more info and asked if ‘slow boats’ are welcome. “Sure”, I was told, “We just take our time, you’ll have no problem keeping up”! Fast forward to that morning as we all drifted down river waiting for Chad Fries in his Eliminator Daytona powered by twin Merc’s to lead us through the twists and turns of the changing sandbars and channel swings. With a stomach full of butterflies I kinda edged my way to the front to sort of get a head start, or so I thought ! At 9:30 the whole field took off, and within 2 minutes every single boat had passed me, and I went from following wakes, to following bubble-trails, then faint rooster-tails off in the distance, and ultimately I was completely on my own! 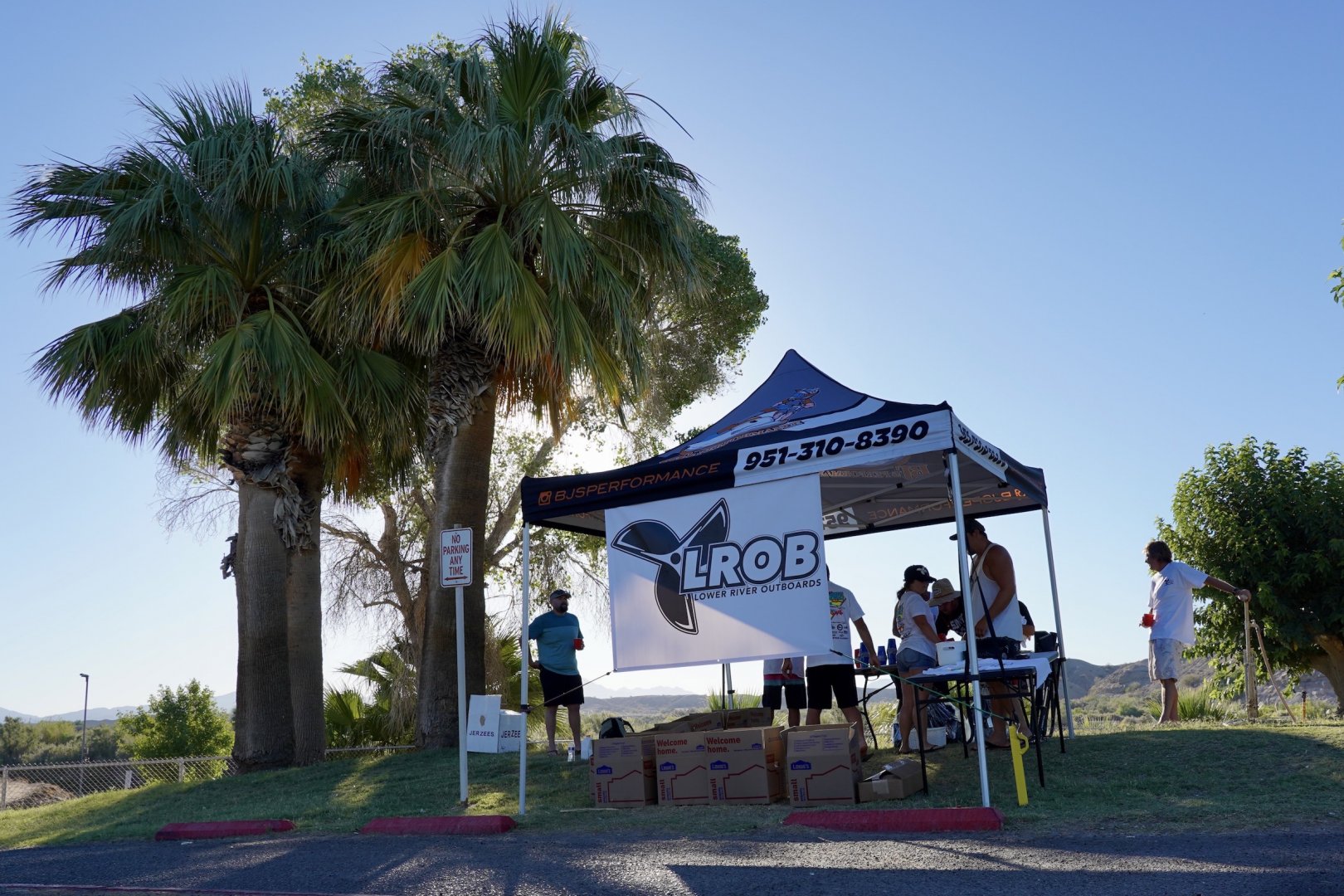 Without a boat in sight and running wide-open and basically blind, I thought to myself, “What the hell have you gotten yourself into this time”? The smallest outboard in the field was well over twice my horsepower, and most were worth 3 to 4 times as much if not more, and that was just the singles! In those first few minutes of running I learned that there was sort of a semi-consistent pattern to the deeper river-channel going back and fourth from the Arizona side to the California side. I kept going and ultimately met-up with everyone at a sandbar in front of Walters Camp where I topped off with fuel. From that point on, I knew as soon as they were even, thinking about leaving, I would pull anchor and take off, only to get roosted a short time later. I guess you could say it was sort of a crash-course on how to to read the river ! I had such a good time that I went again last year, and even while nursing a back injury, still had a blast.

This year was a no brainer, I booked a room at the nearby Hampton Inn for Friday and Saturday nights and rolled into Blythe around 7:30 am on friday to do a little pre-run bass fishing and a some exploring up river from McIntyre. Called-it early, fueled-up the boat and hit the hay after a meal at a local taco shop up the road. Mornings come early on the river and the event organizer Chase and his buddy’s already had an EZ-Up set up near the top of the launch ramp. They were selling t-shirts, hats, free stickers, and raffle tickets for some unreal prizes donated by the sponsors. All proceeds were going to The American Brain Tumor Association. 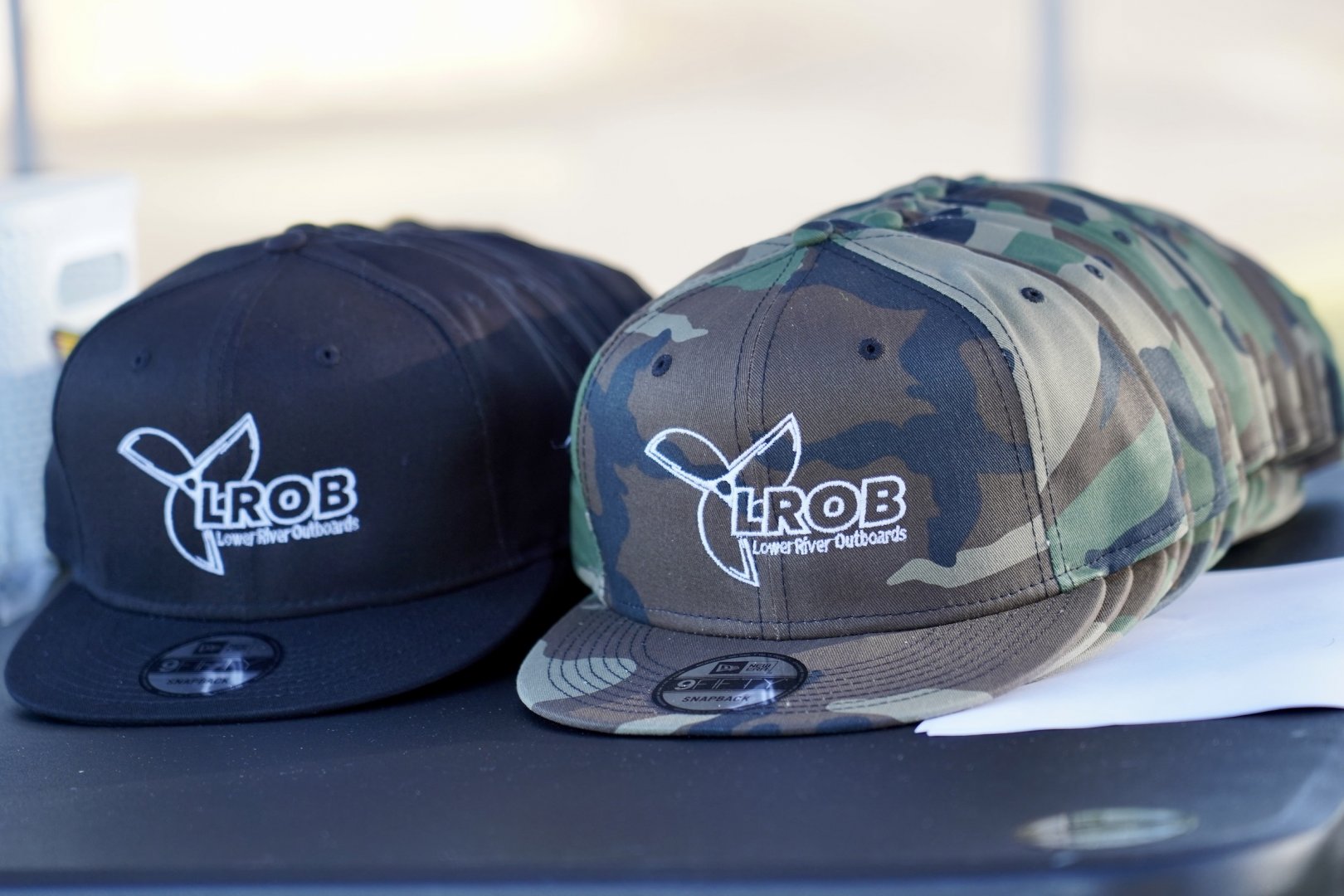 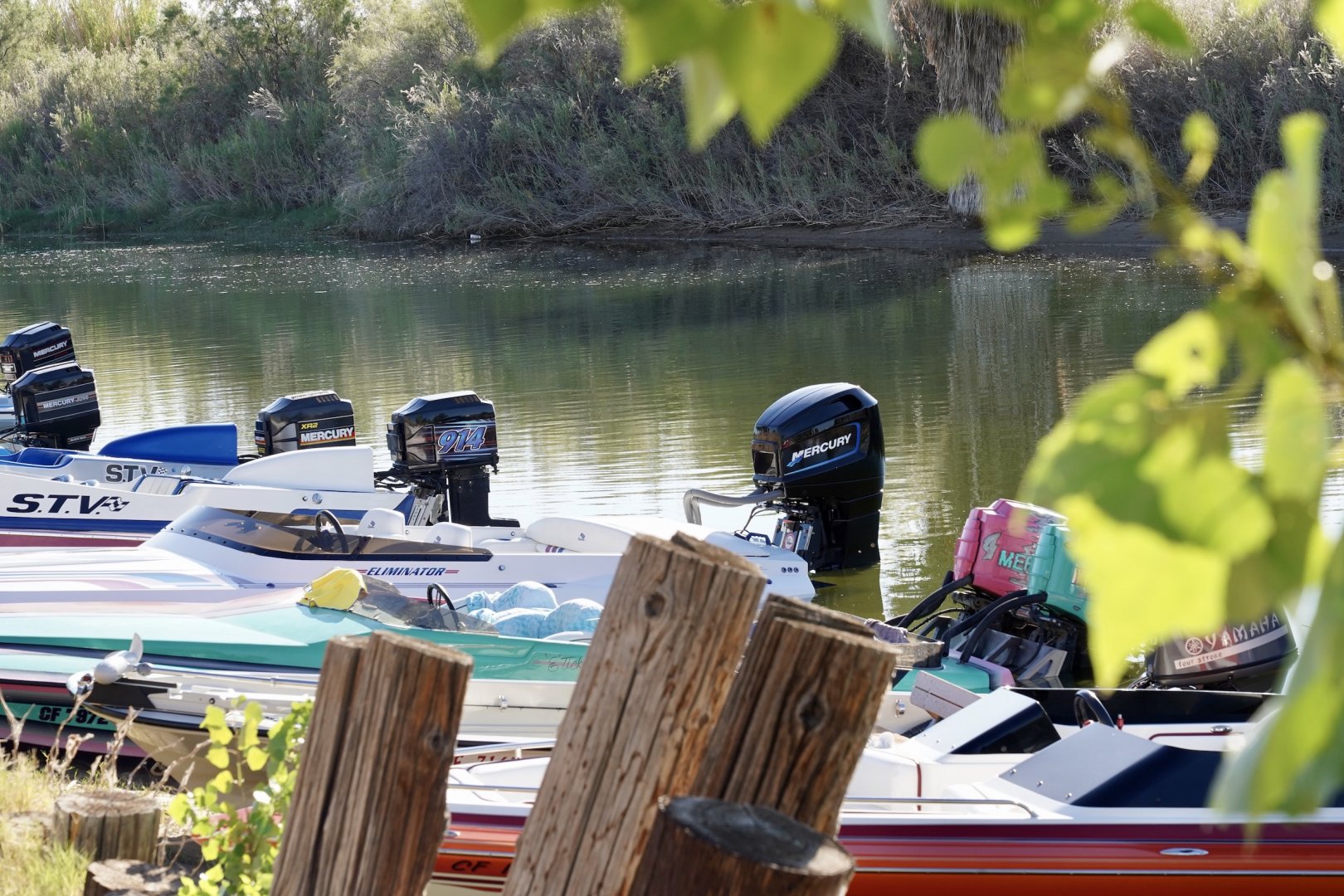 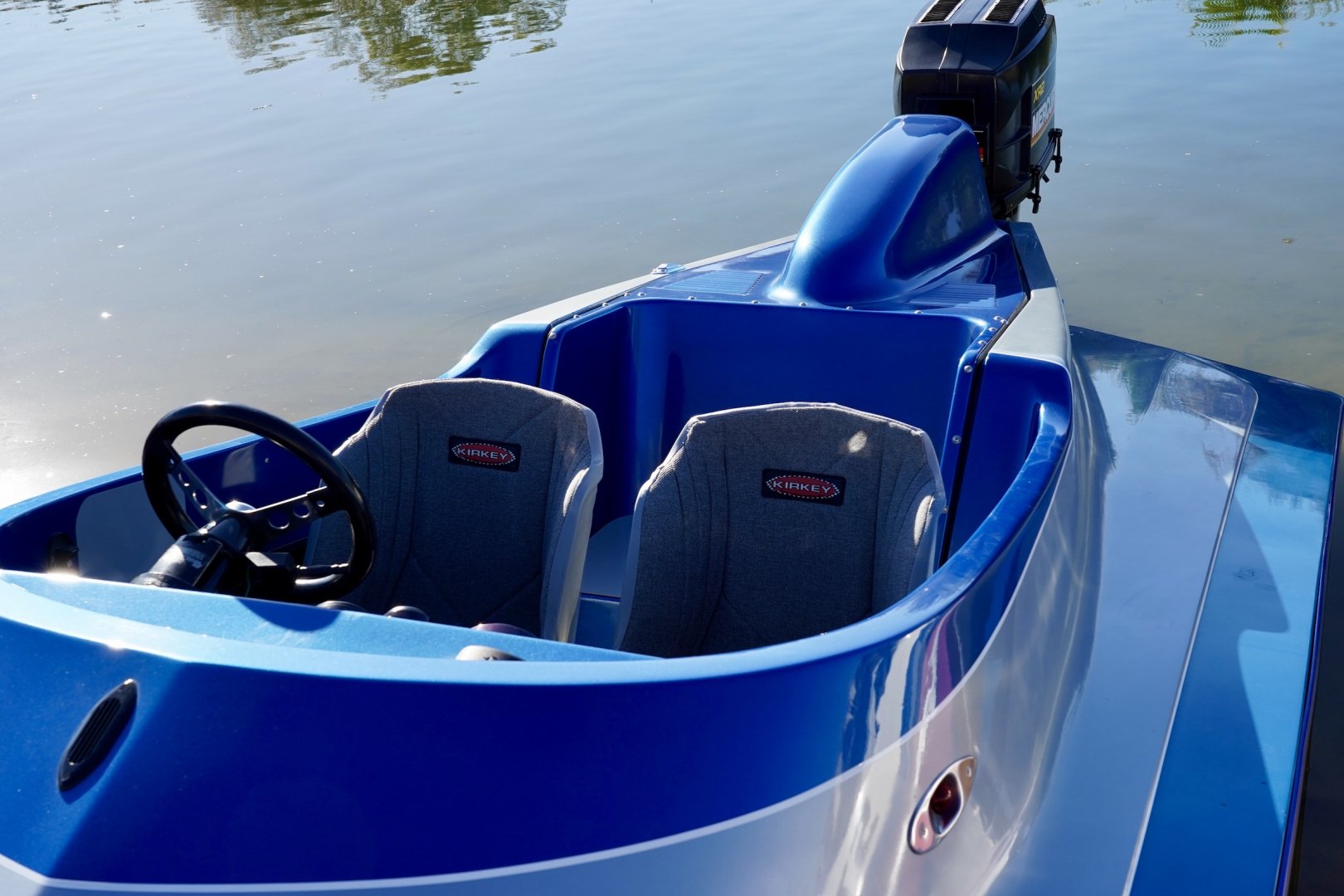 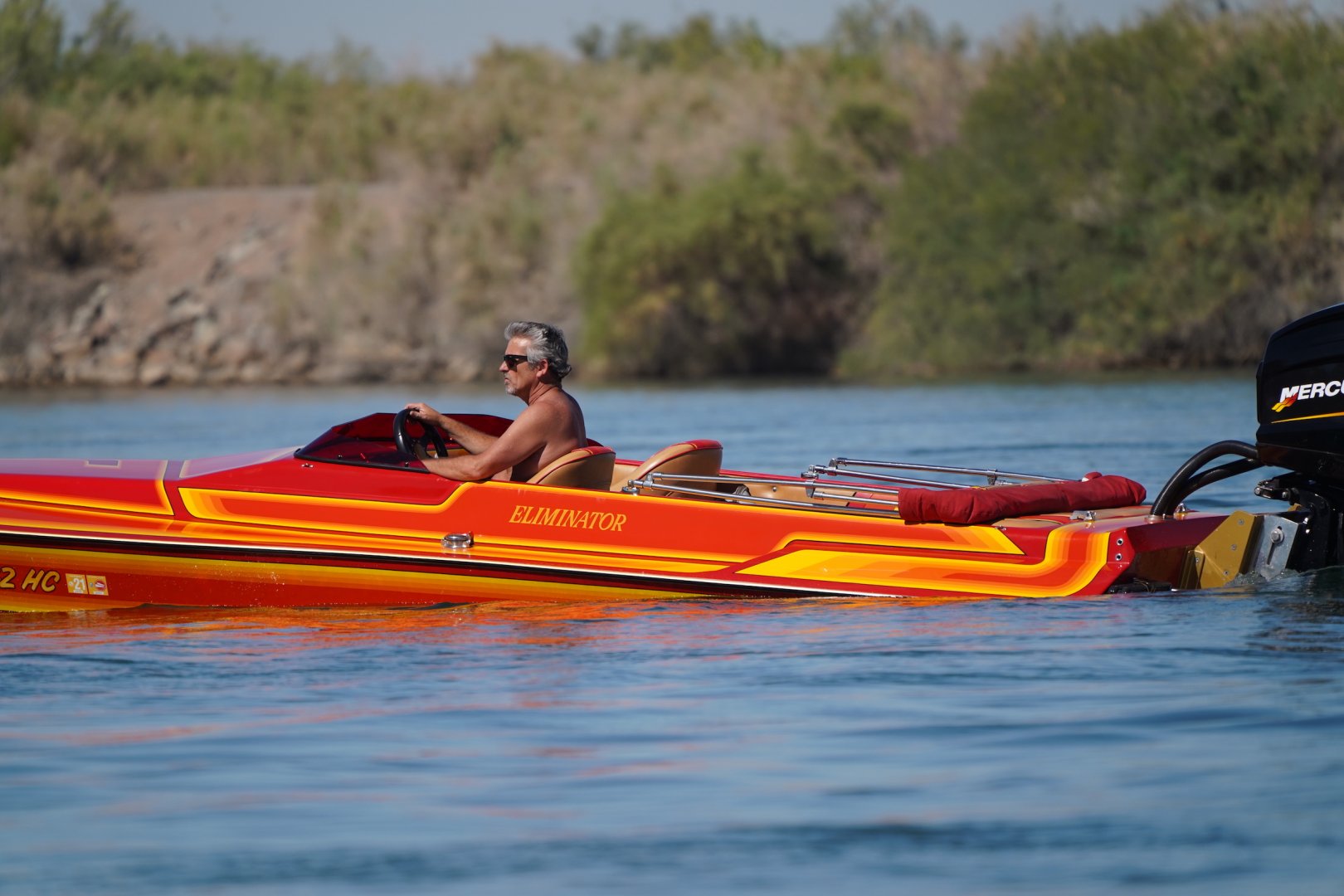 Once everyone was launched and on the beach, a brief drivers meeting was held outlining the plan for the day, destinations, fuel stops, etc. And at 9:30 the 50 plus boat field tore down the river on the way to the first stop about 30 miles down river and mid-way point. . . . Walters Camp 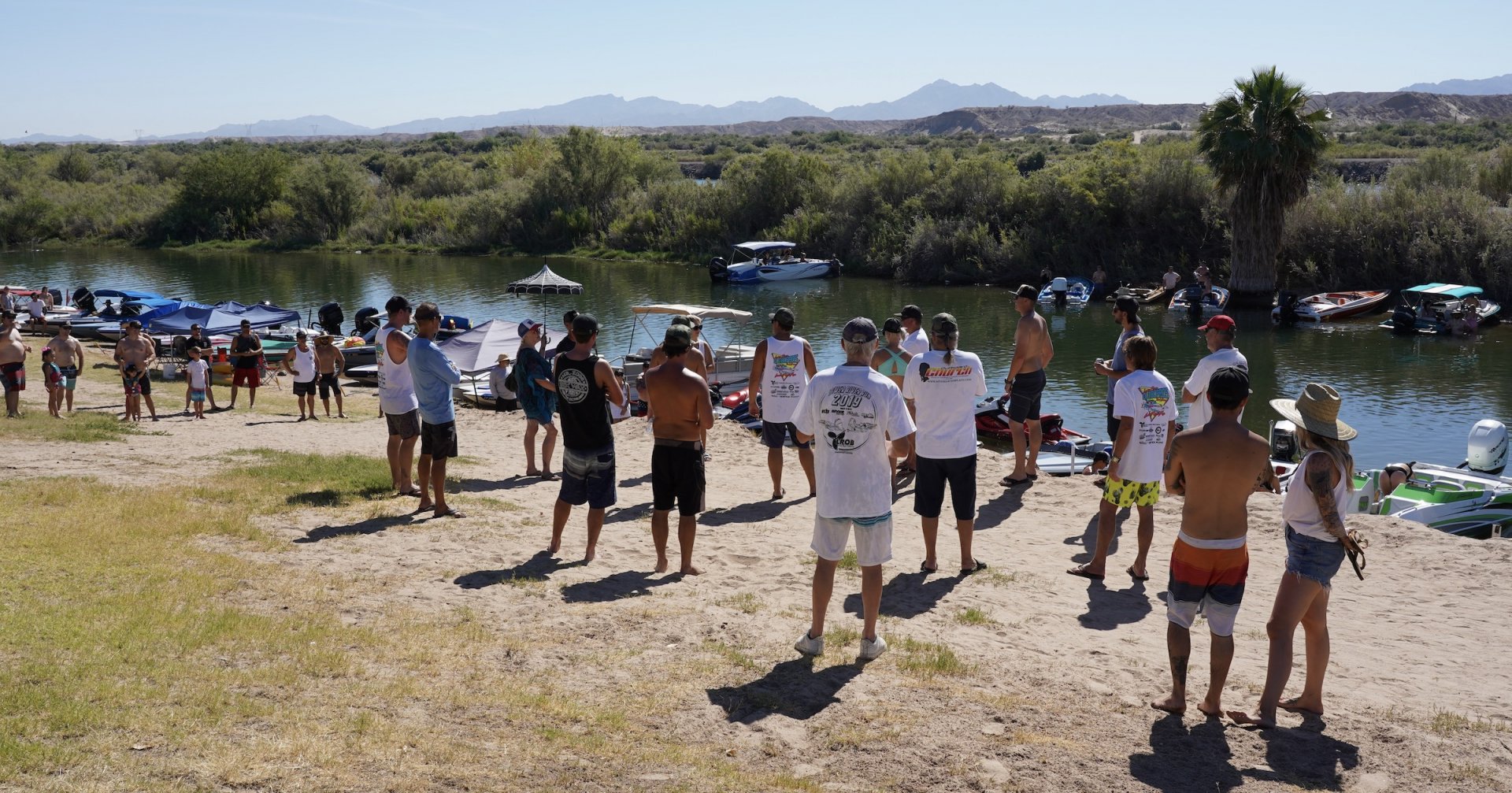 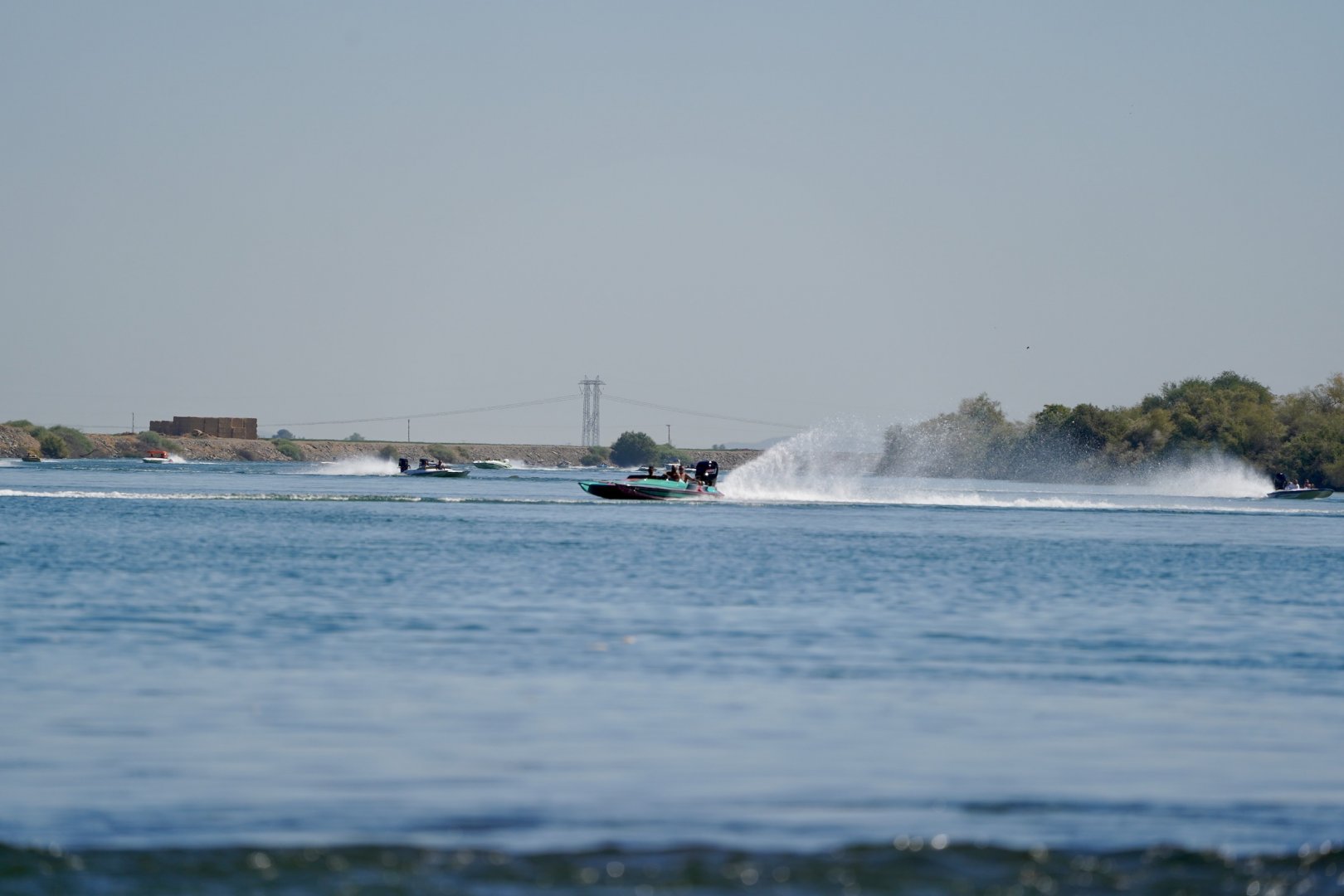 I took off about a half out early and set anchor on a beach down river to grab some pictures of the field as they ripped by. 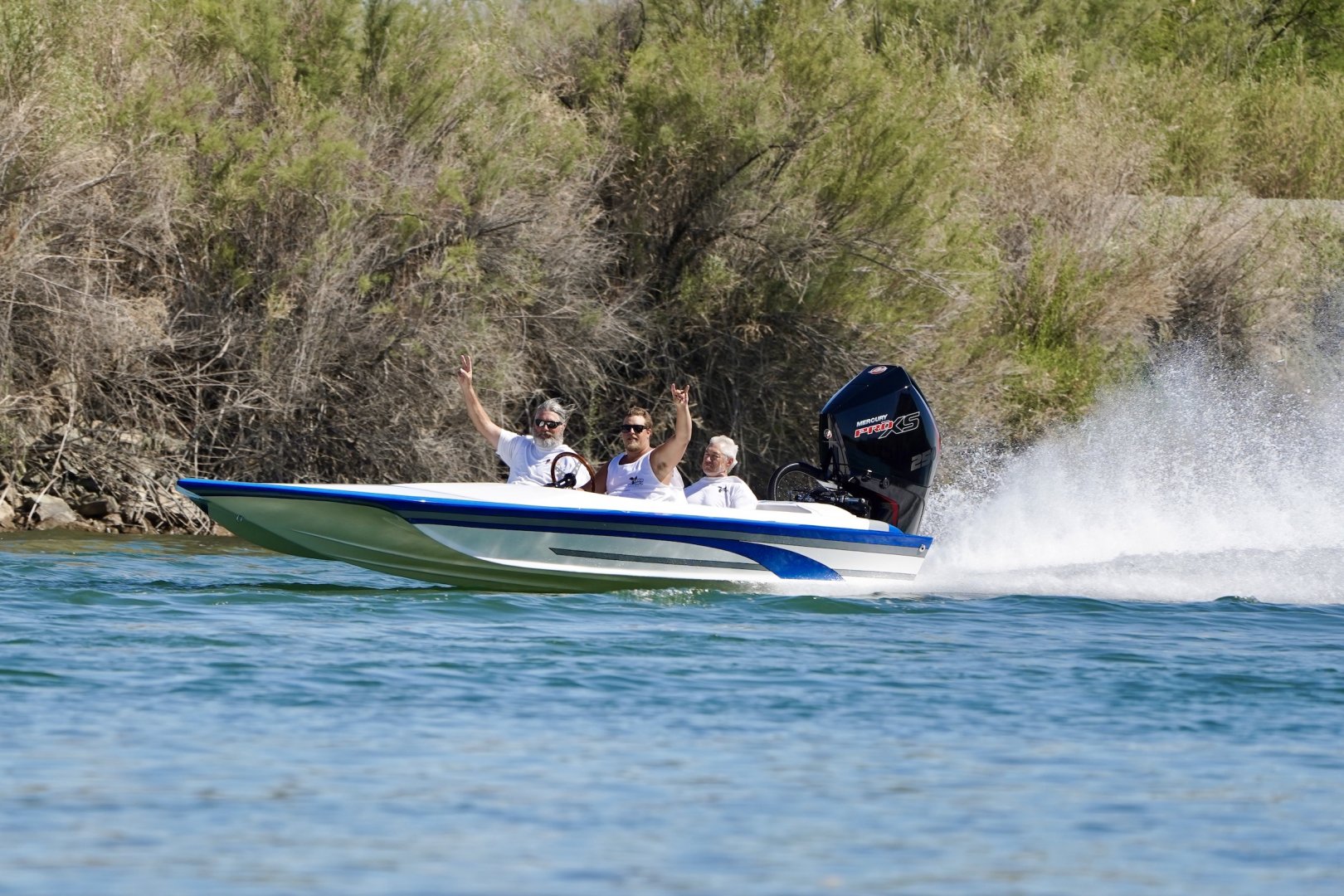 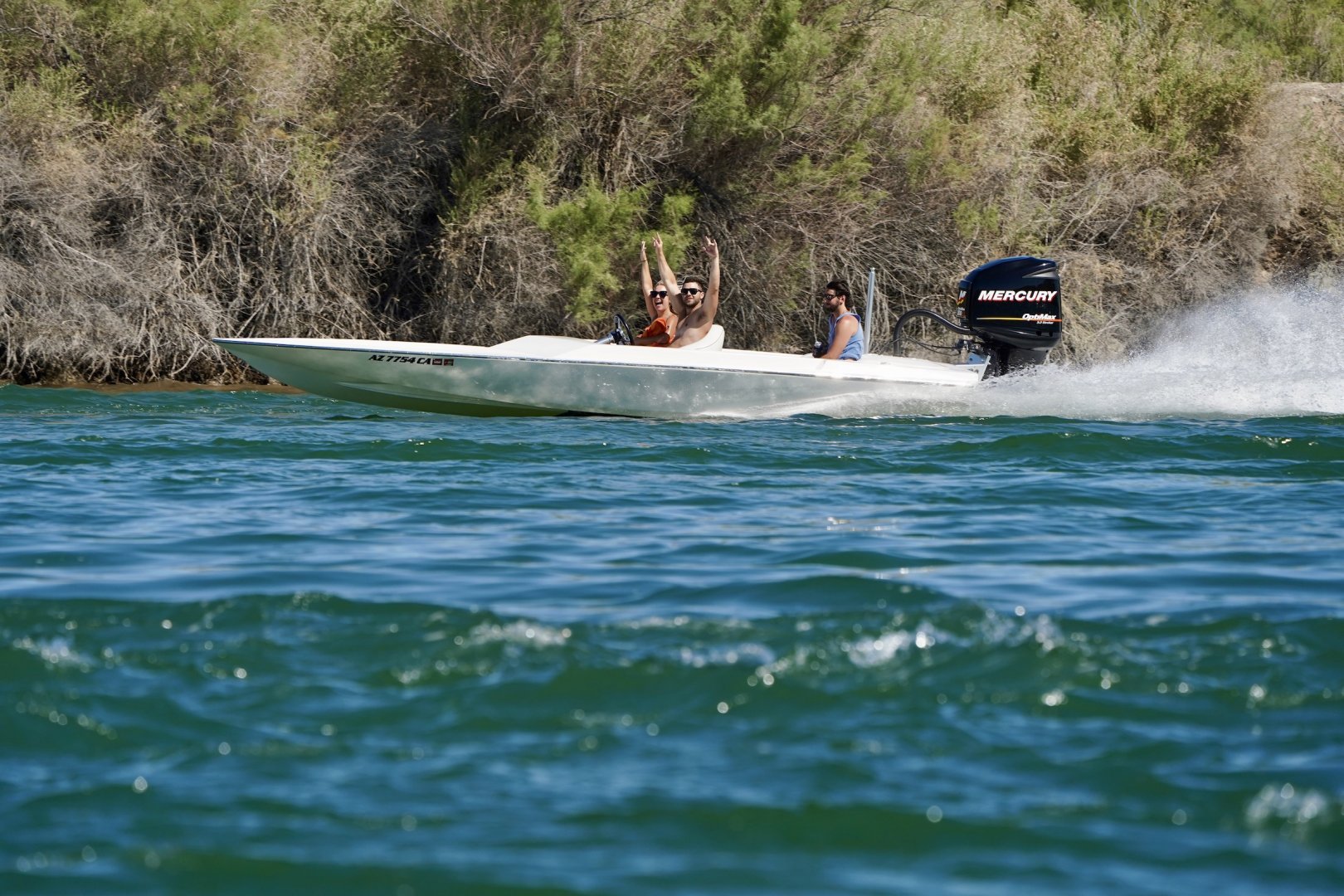 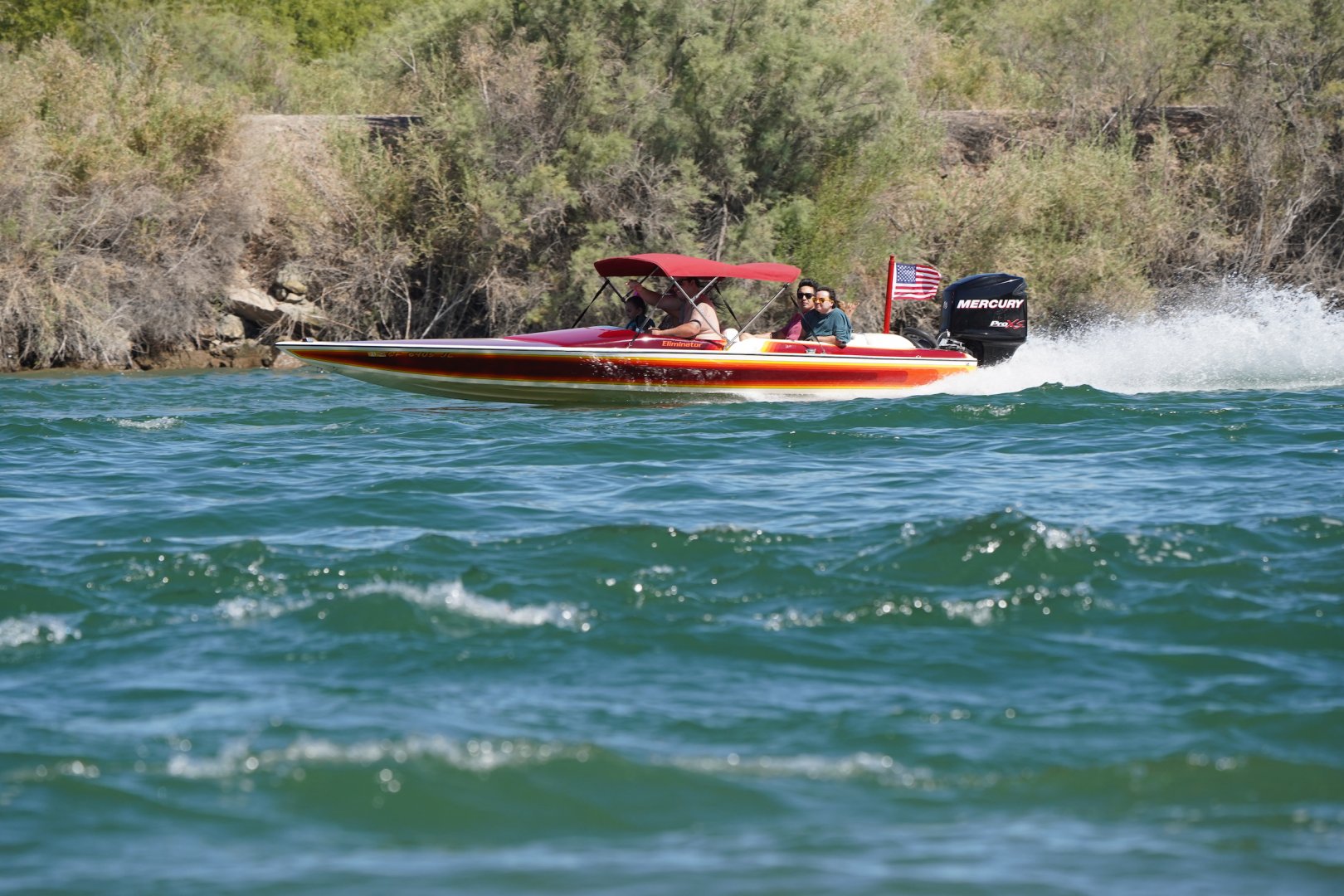 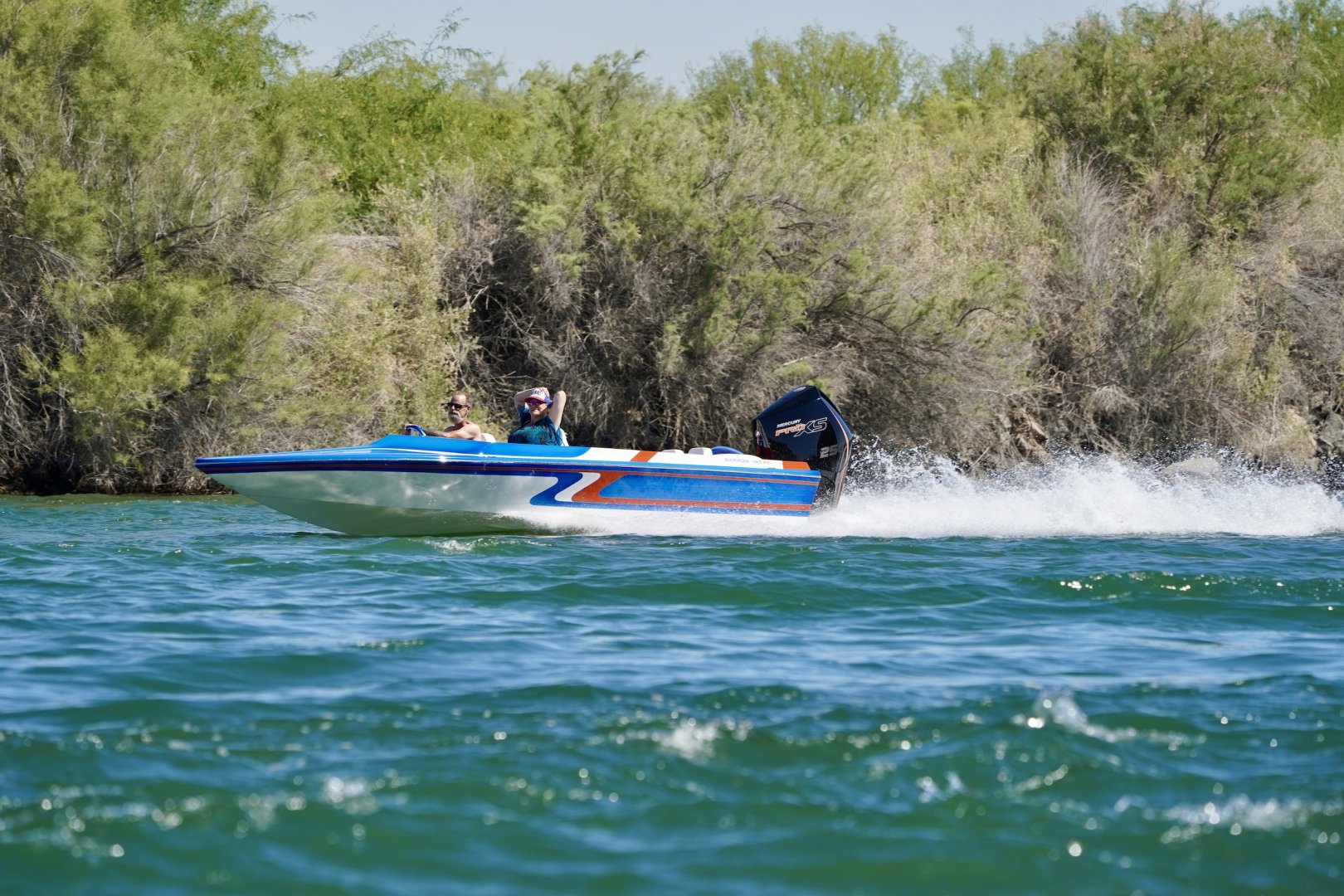 Really Cool to see all the smiling faces running down river. 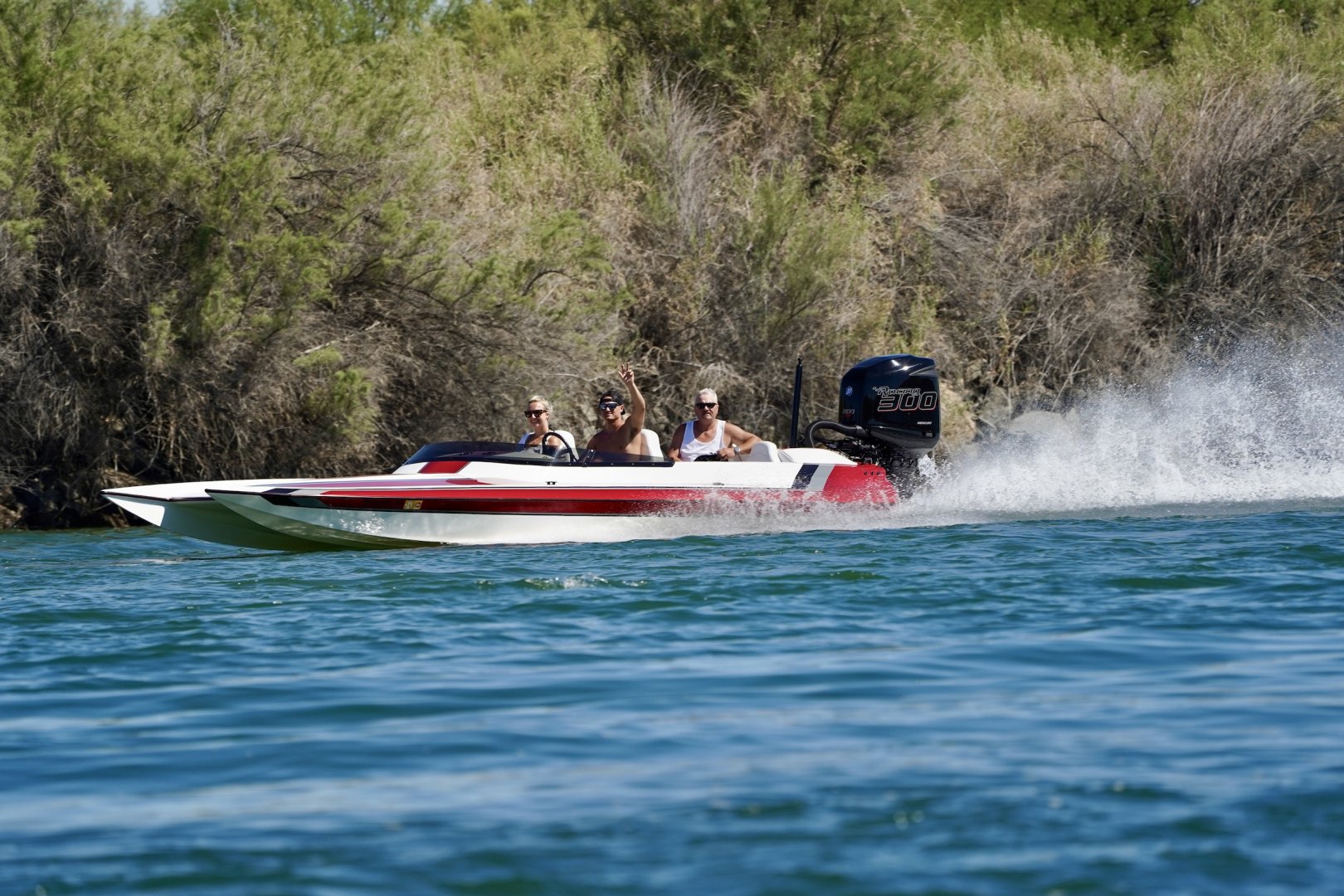 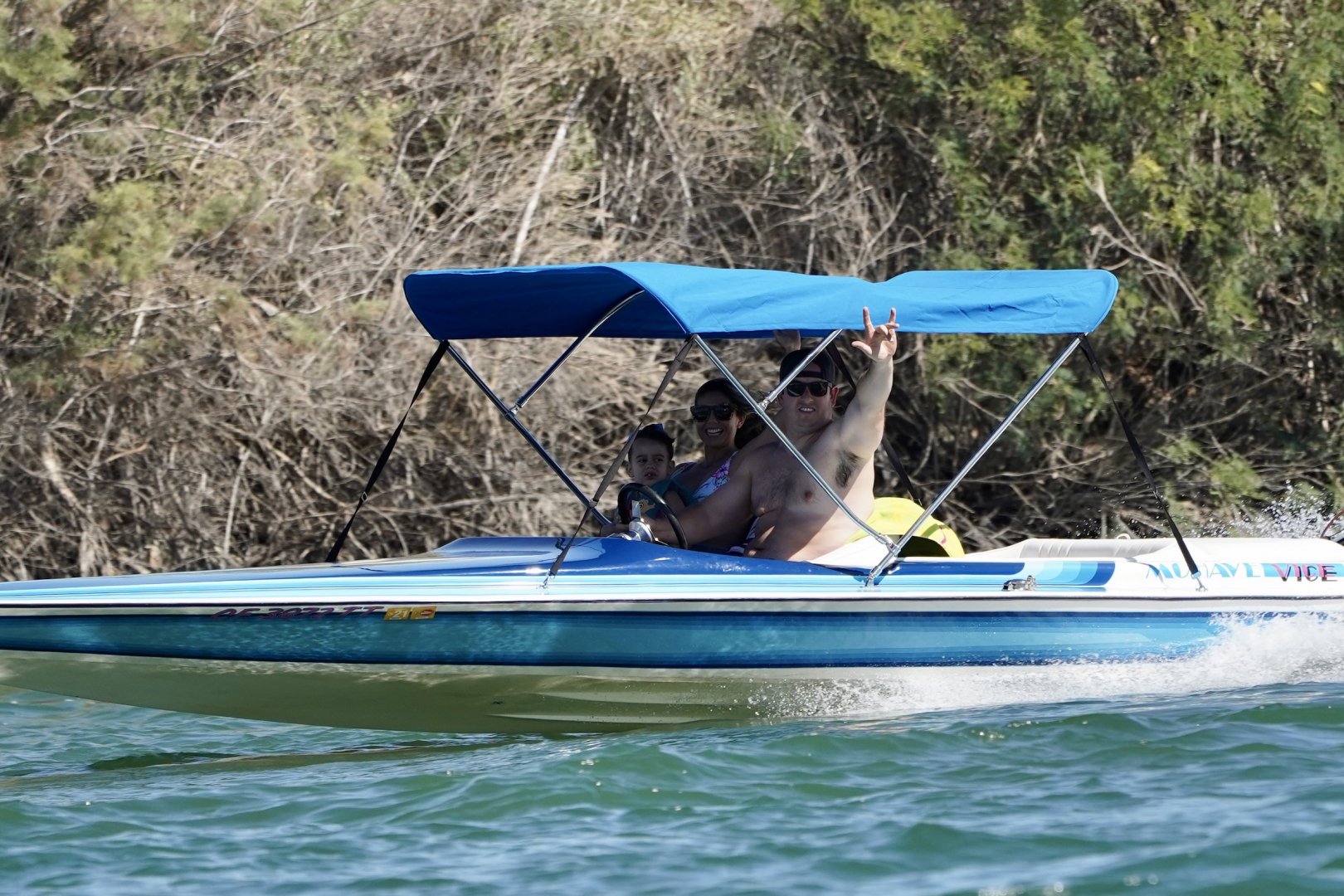 With the river level high, the sandbar in front of Walters was still 2-3 feet deep. Everyone threw an anchor and hopped in to cool off, grab a snack, or a cold beverage. Good times! 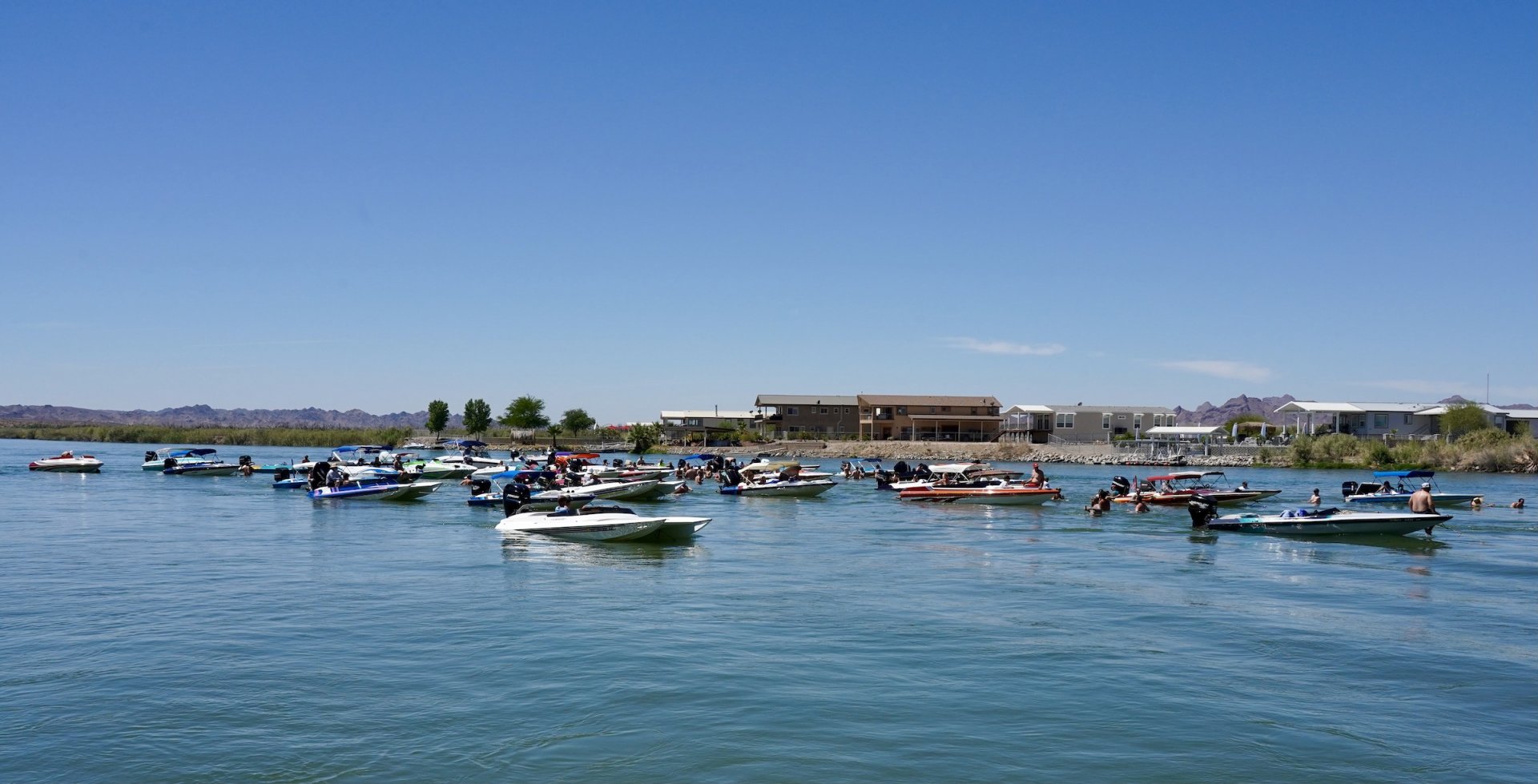 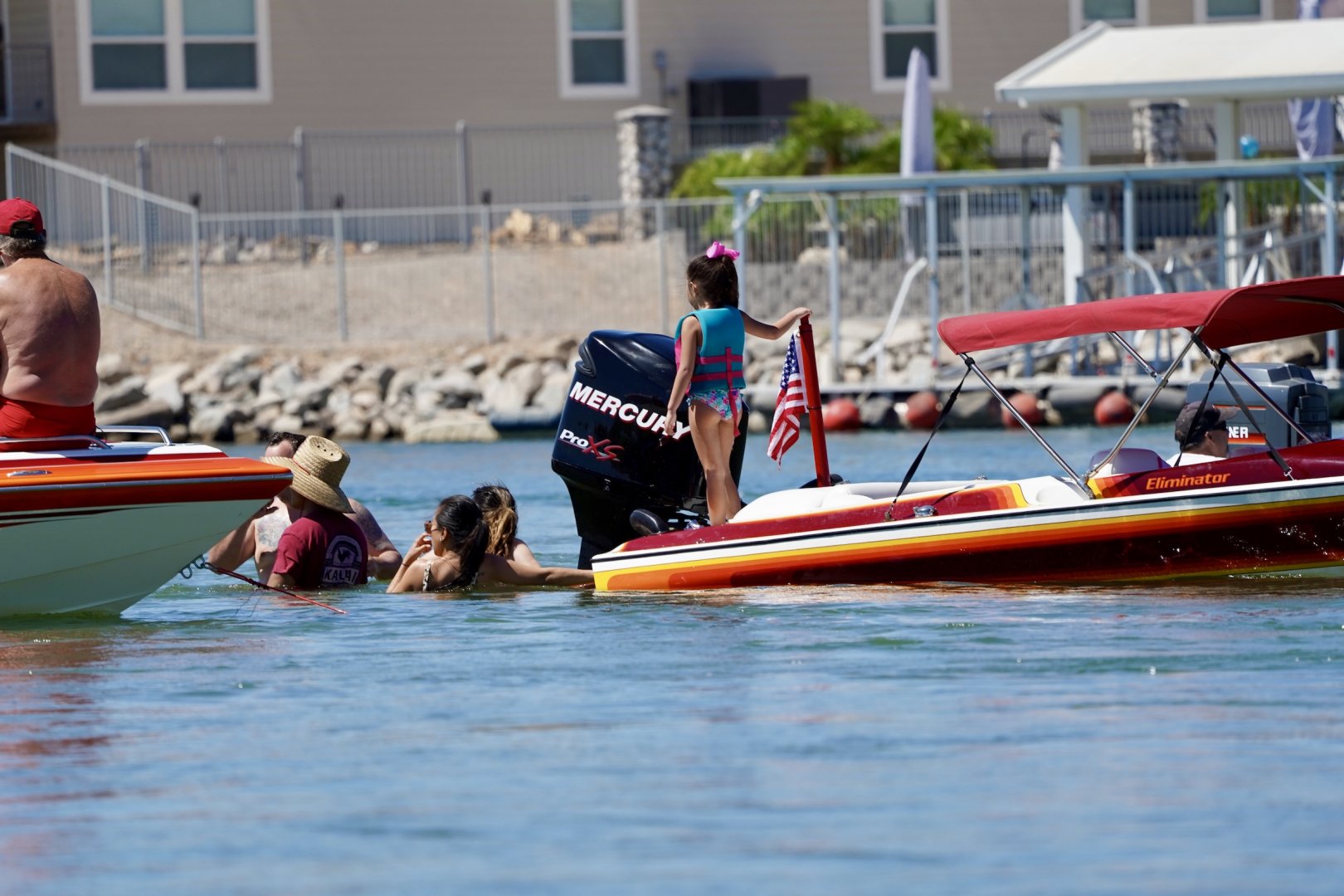 Next stop was the ‘4-S’ sandbar about another 15 miles down river. That stretch to me, is one of the most scenic areas of the entire lower river. It really widens-out between Walters and 4-S, the sand bars & islands are very pronounced around there as well. It’s about the most remote stretch on the river and just killer. 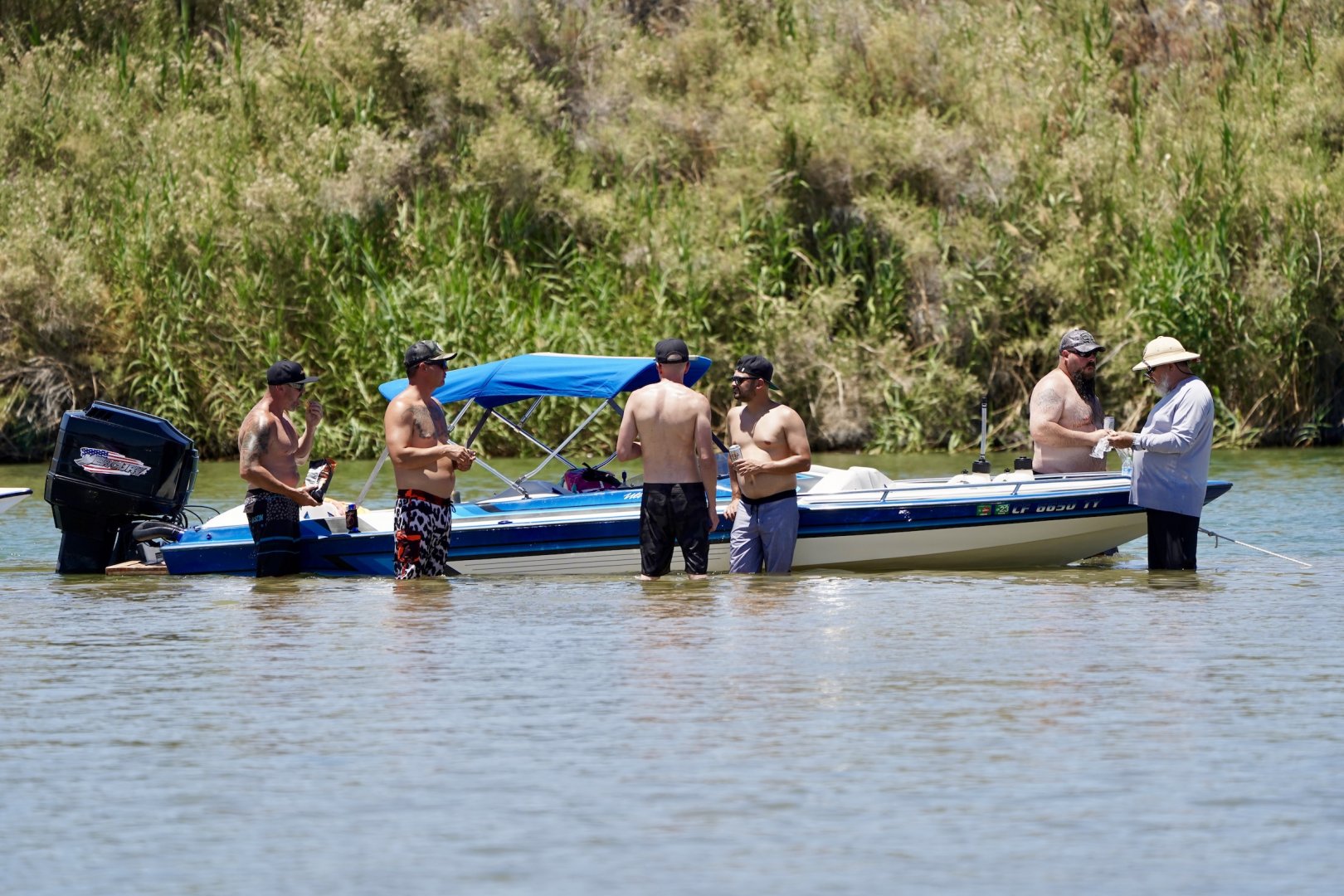 At 4-S several groups of people had come up-river from Fishers Landing, Lake Martinez, and even Hidden Shores to meet up. Lots of families, with their kids and pets made for a really cool time. A few people played horse shoes, threw a frisbee around etc. Some of the boats continued on down to Fishers Landing for lunch and a re-fuel, while many stayed at ‘4-S’ since it was so dang nice right there. 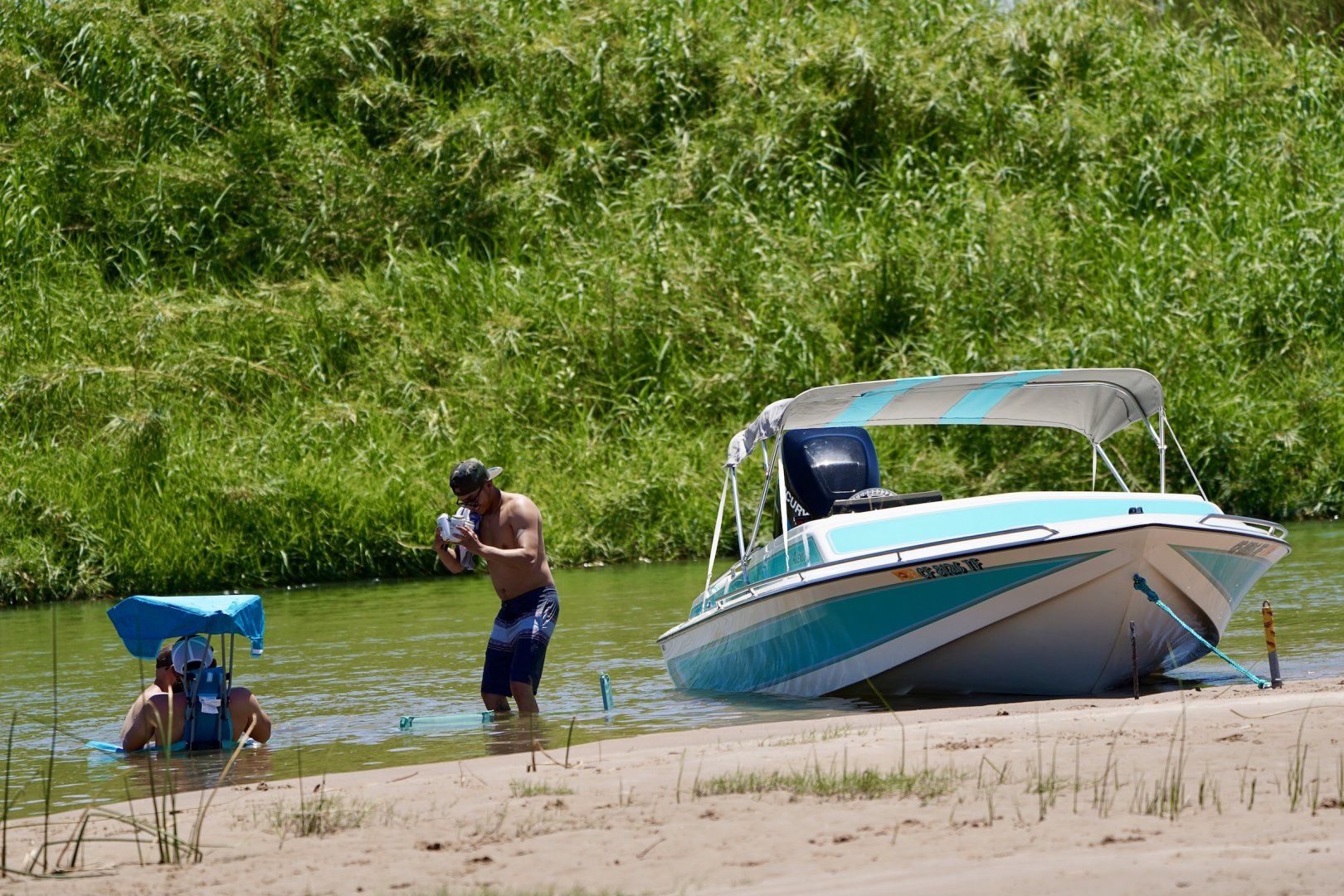 Like always when you’re having a good time, the hours seem to just fly by, and soon boats were starting to peel out 1 by 1 to head back up river. Some boats stopped to re-fuel at Walters Camp, while other continued back up to McIntyre. The water level was up and made for pretty safe navigating, though you still had to run around the shallower sand bars, and a few gravel washes that would push out into the main river. I won’t lie, it’s fun making the turns following the deeper channel swings even if you could make it ‘over’ the top of some of the sand bars.

The field really spread out on the last leg of the run. Occasionally you’d come around a corner and see a couple of the boats stopped at a sand bar with people cooling off in the water. I stopped to take in a few sights along the way, and to re-hydrate a bit before continuing on. Once back at McIntyre Park, I decided to keep going up river a short distance to take one final swim and cool off, which turned into a 45 minute soak ! Gotta love the river.

Everyone pulled-out their rigs and kinda re-grouped around 6 o’clock, while Chase and crew had set up sort of a circle of RV’s for an after-run-gathering. They even brought in an industrial size ‘swamp cooler’ which was really nice! ‘Daves Griddle’ had brought 95 pounds of chicken, al pastor, and carne asada, and was grilling full speed on 2 large flat top grills for tacos, while people chatted it up over a beer or cocktail. 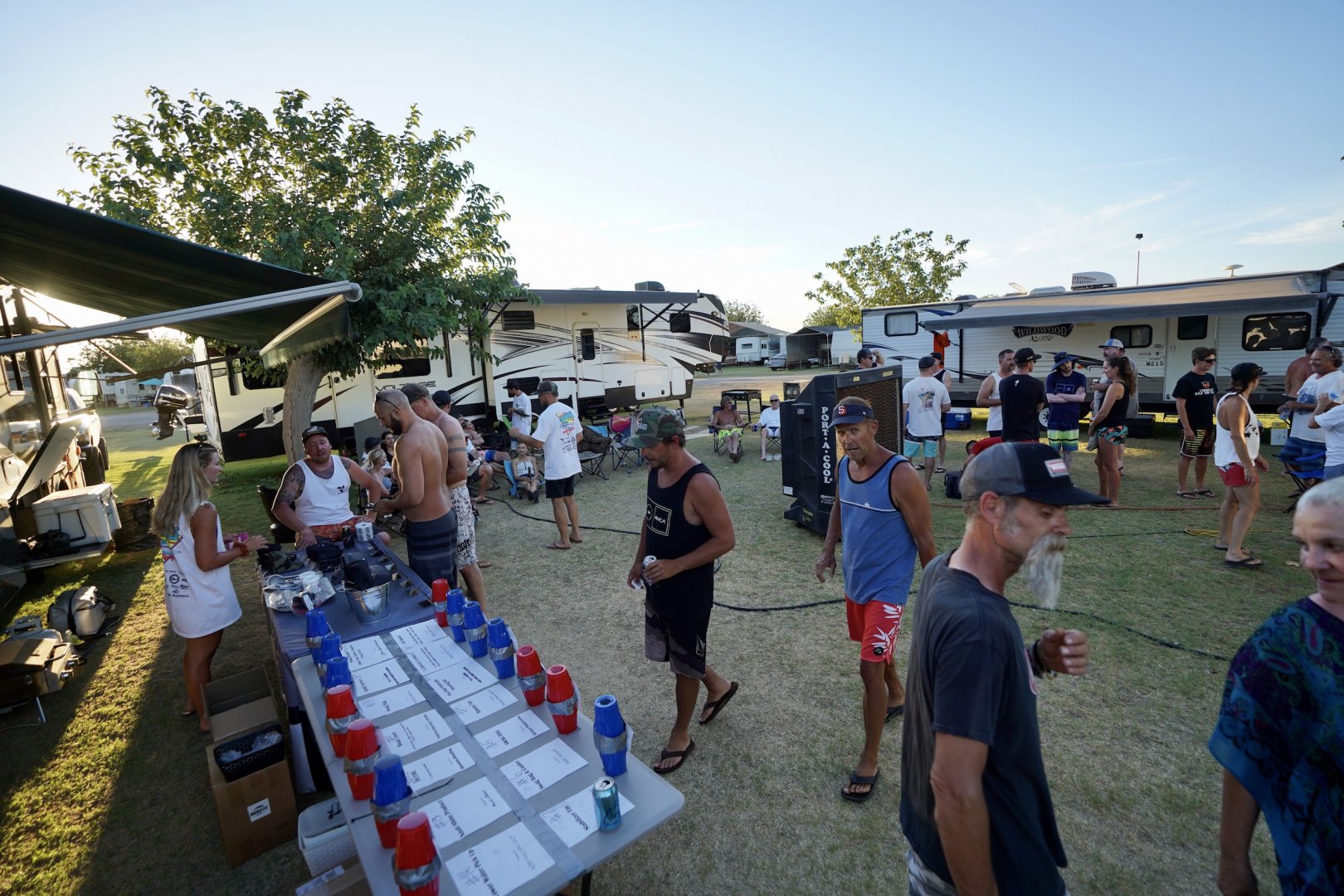 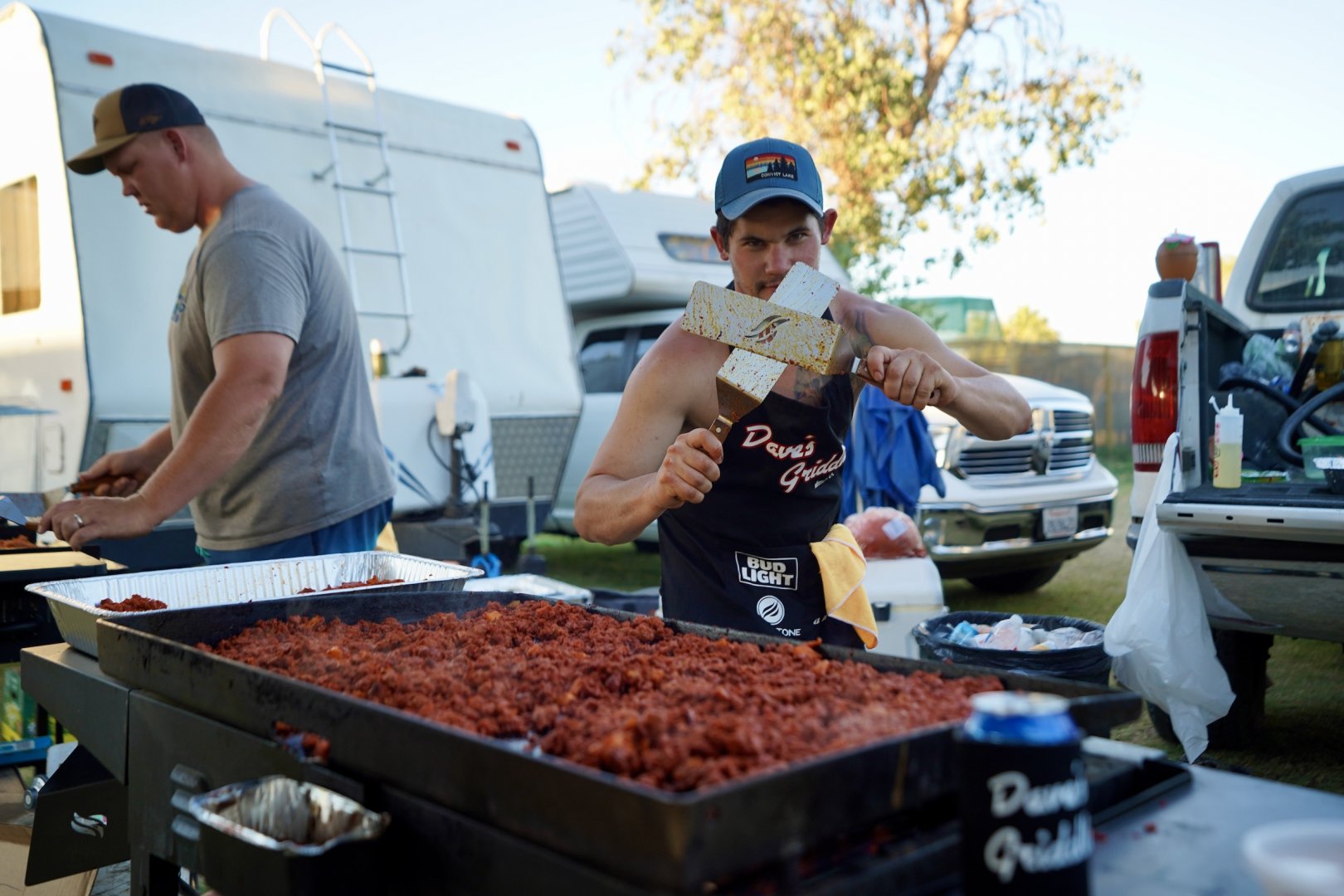 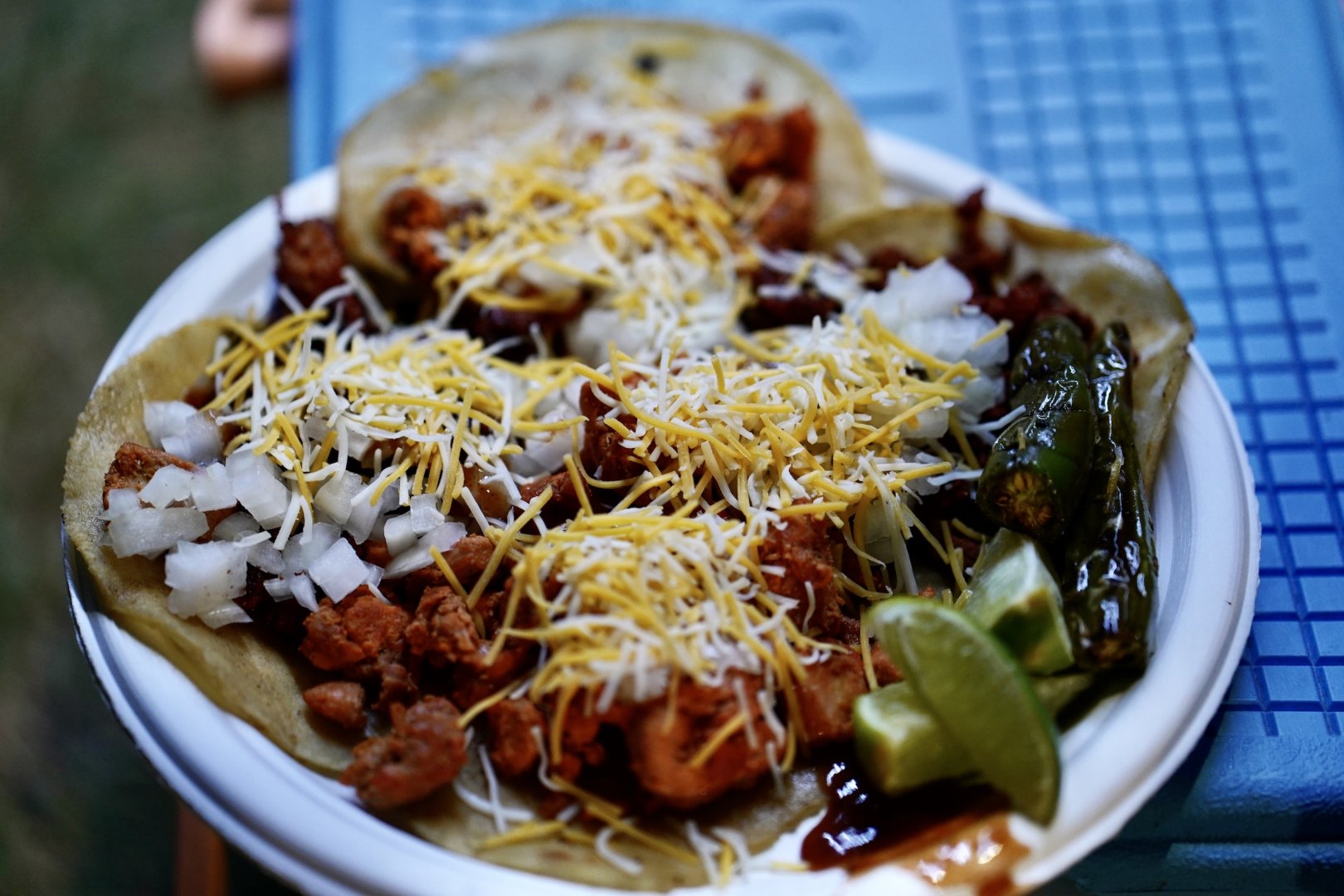 The raffle prizes donated by the generous sponsors were really top notch. Rather than a ‘random’ drawing for whatever item was there, they were separated and you could put your tickets into a cup for that particular item(s). There was a custom boat cover from Perfection Boat Covers, a custom Bimini Top from Martinez Marine Upholstery, Sea Star Hydraulic Steering from Wide Open Throttle Marine, plus an $800 boat service, a Low Water Pick-Up from Bob’s Machine Shop, Nauti Shine gift pack, and killer Gift Baskets, Swag Bags, and Gift Certificates from River Daves Place, Nikki Bostick Insurance, Straight Edje Custom Paint, Maxed Out Marine, River Patriots, and Absolute Detailing. All the winners seemed super stoked on the prizes, and the group raised $5,000.00 for the American Brain Tumor Association. 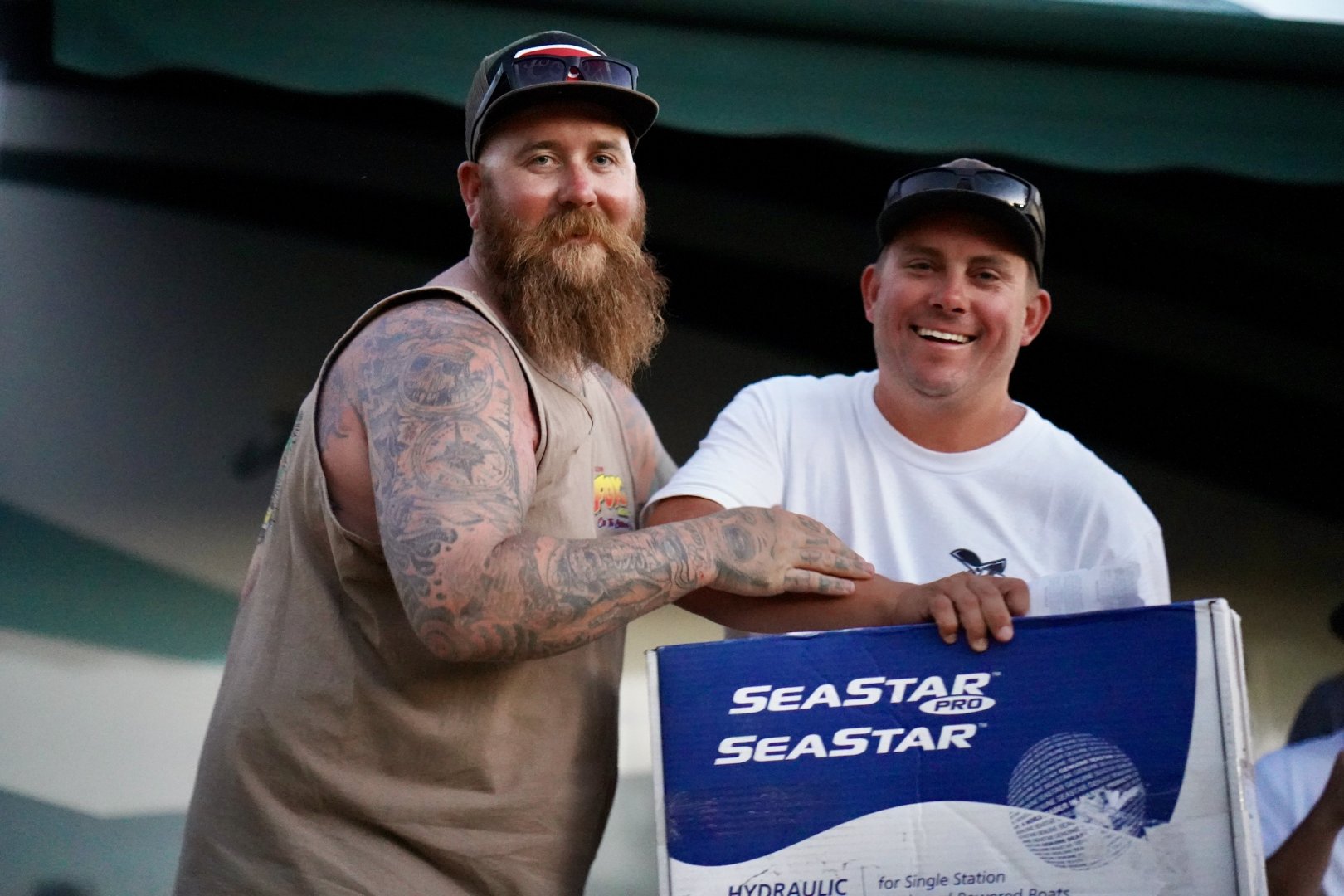 Like the last 2 years, Chase and the boys mixed it up a little and had some ‘awards’ made to present to some of the participants. They were actually really cool little stainless steel plaques that looked to be laser cut with glossy black acrylic backings. What was funny and I thought really captured the essence of the group was their hilarious titles, like ‘Run Whatcha Brung’, ‘Tow-Hook Tommy’, ‘Fastest Outboard’, ‘Drunkest Co-Pilot’, ‘Best Wrench Turner’, ‘Runin On Fumes’, ‘Trailer Queen’, and ‘Best Boston Whaler’ for the only one in the field. Everyone thought it was a riot passing out the awards, and really capped off another great Lower River Run. 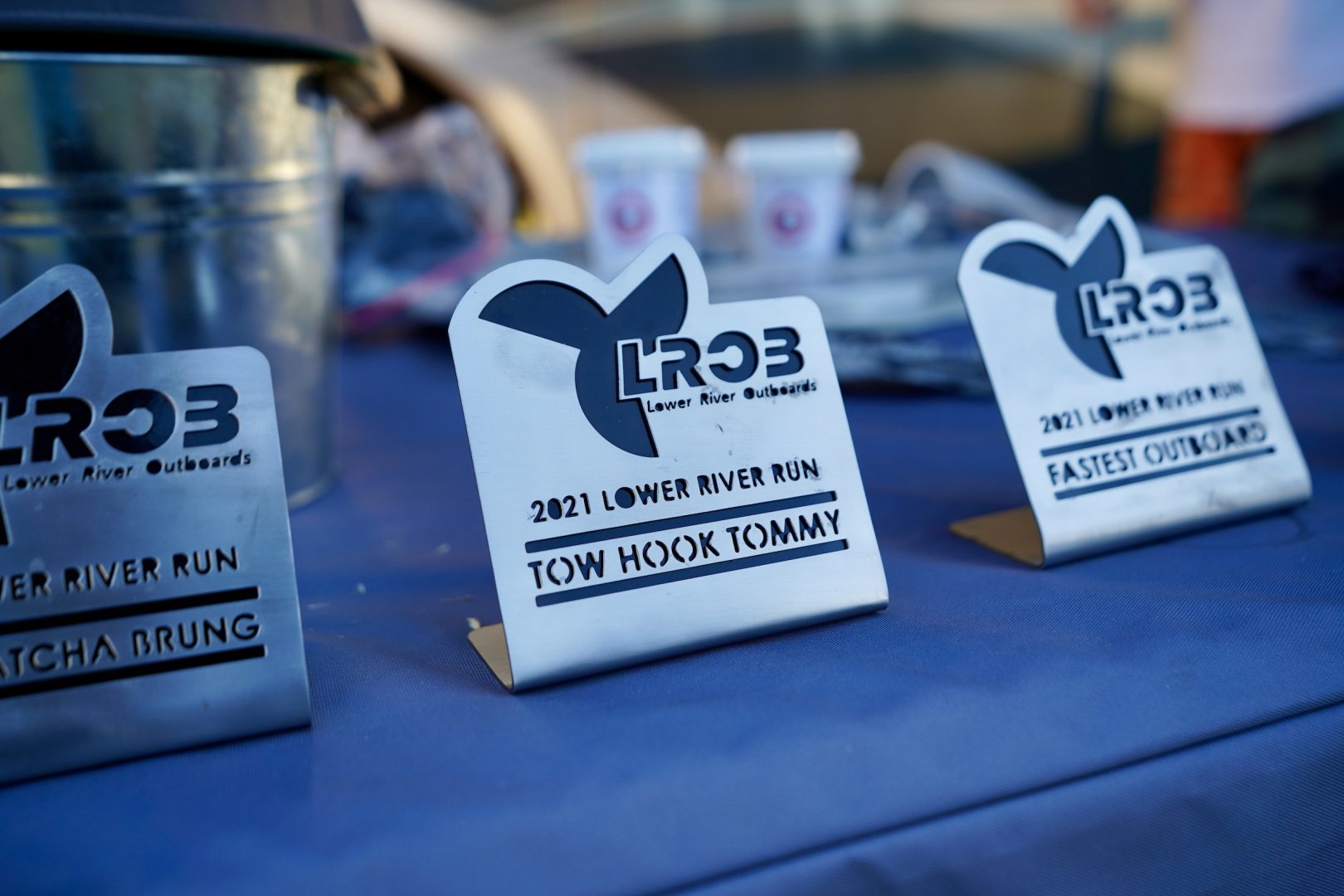 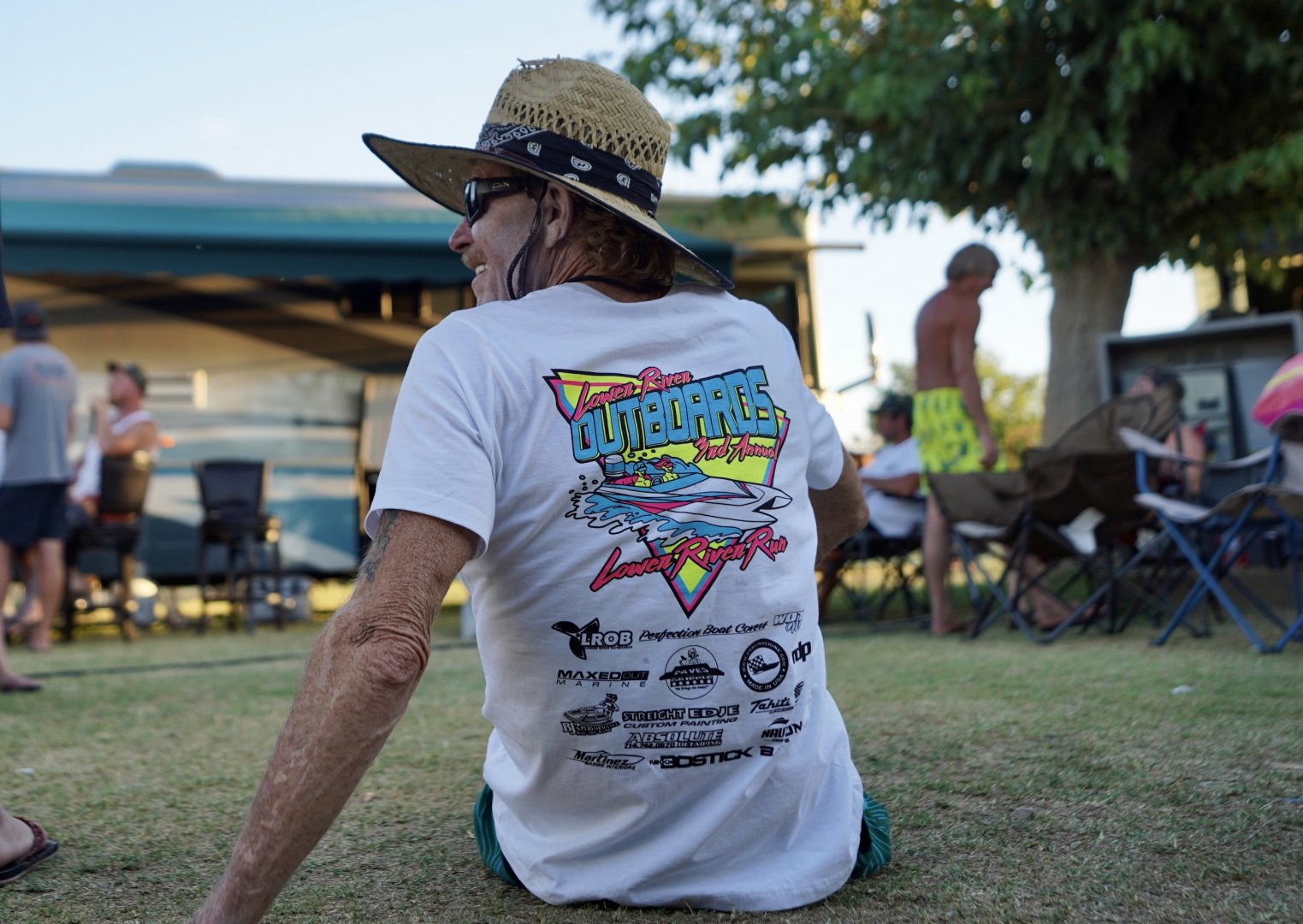 I’m already looking forward to next years run, it’s a great group of down to earth people, and the run is total blast. If you’ve ever thought about running that section of the river, or just wanna do something different, I can highly recommend it.

Hope to see you next year.

Written by Eric White
Reactions: HST4ME, Sasteeves, KK12 and 4 others