YES it was another edition of the Miami International Boat Show (MIBS), but NO, it was not just another powerboat roped off slip 327 on Ramp 3 – it was the radical “show-favorite” DCB Performance Boats M37R Widebody Mad Props.

The 37-footer may be a delightful new sight for East Coasters, but the Mad Props moniker has been plastered across more than a few marine machines in the toy stable of poker run enthusiasts Greg Harris and Yvonne Alemán. Up to now, the South Floridians’ watercraft collection including a twin Mercury Racing 700-hp supercharged 32’ Skater, and outboard-propelled 340X MTI, shared one common theme, they all had previous owners.

For this reason, the signature namesake runs much deeper with the DCB. It’s the couple’s first fastboat hatched from scratch. A Mad Props… their way, all the way! Harris, a successful Fort Lauderdale-based real estate entrepreneur, had been on the lookout for a new sport cat but was shying away from those on the market with two sponsons and a short center pod.

The savvy speedboater wanted a full-tunnel, and the newly launched M37R model with its 65-inch tunnel was the perfect match. Harris had to go for it. Following the three-year tooling and engineering stint and collaborative partnership with Franco Gianni of SFG Yacht Design, at DCB’s El Cajon, Calif. headquarters, hull No. 9 out of production was meant to be the next Mad Props! 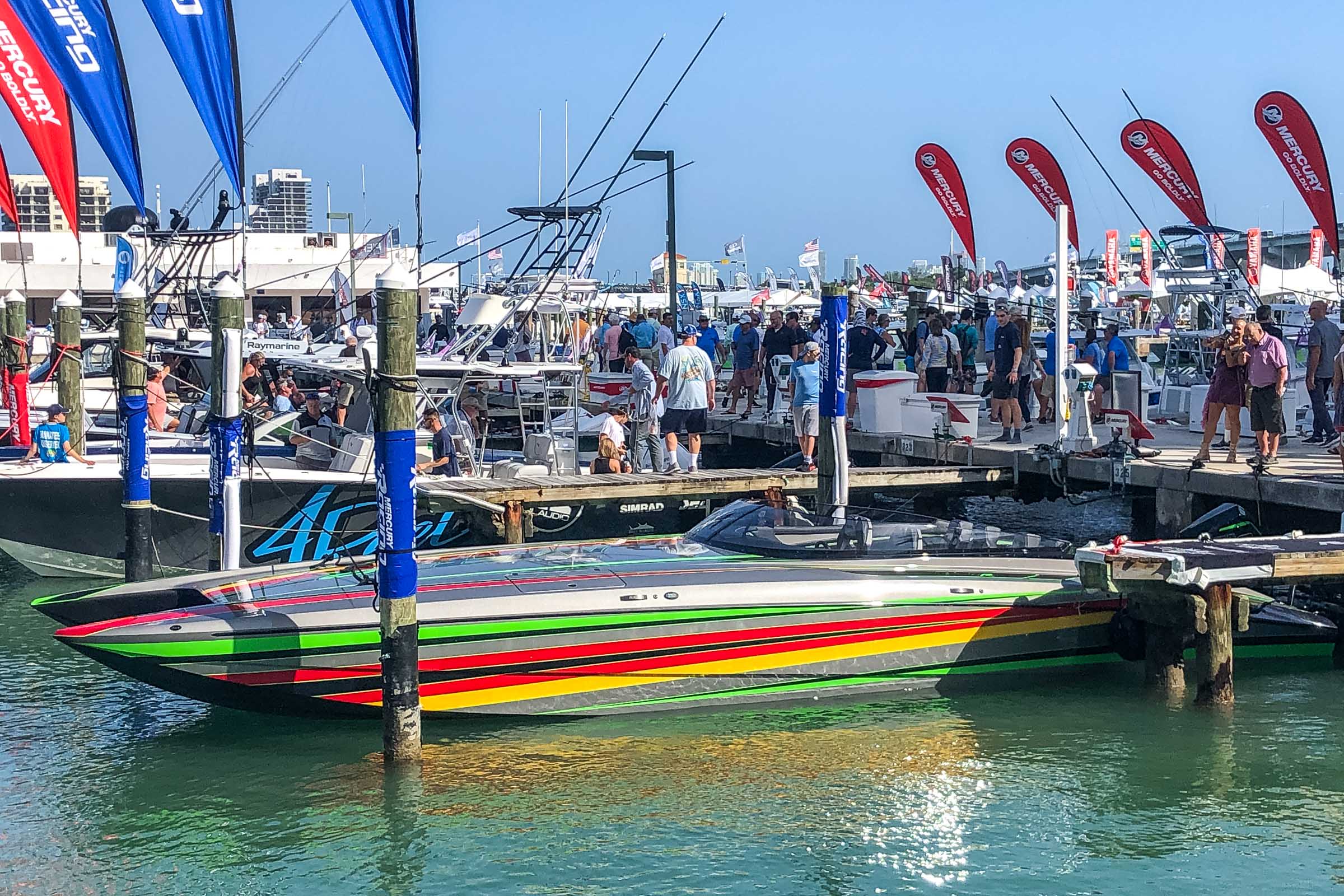 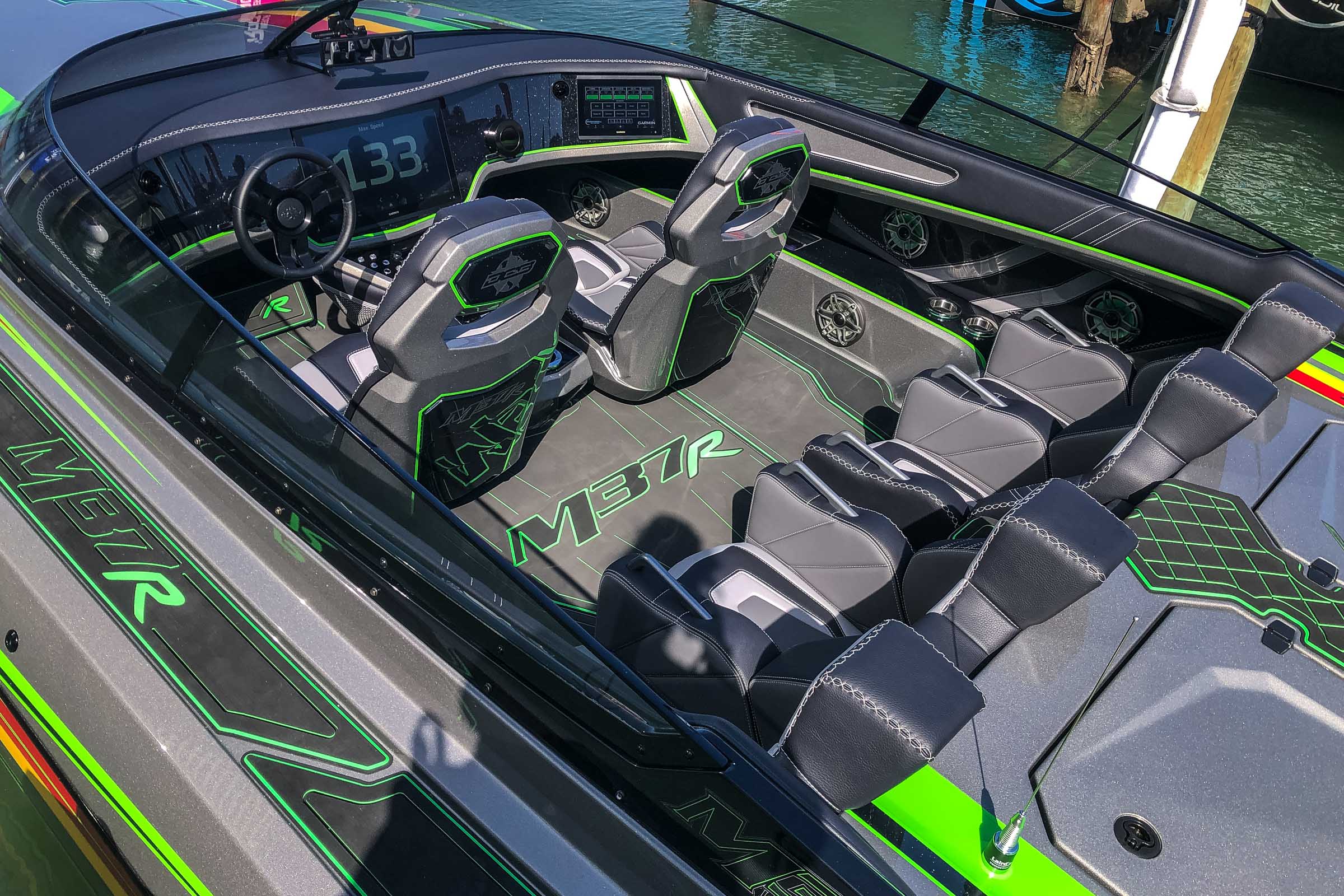 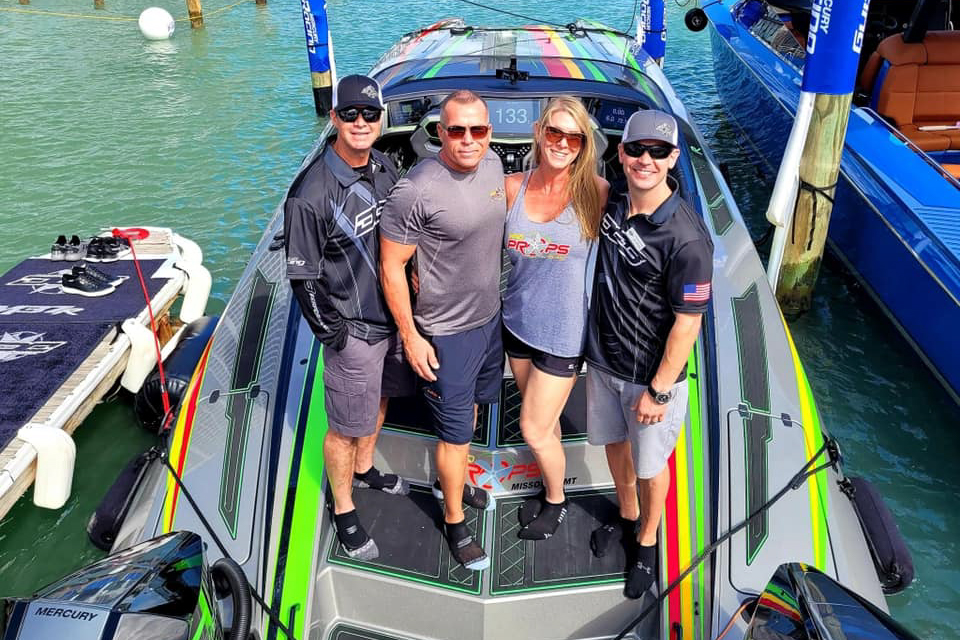 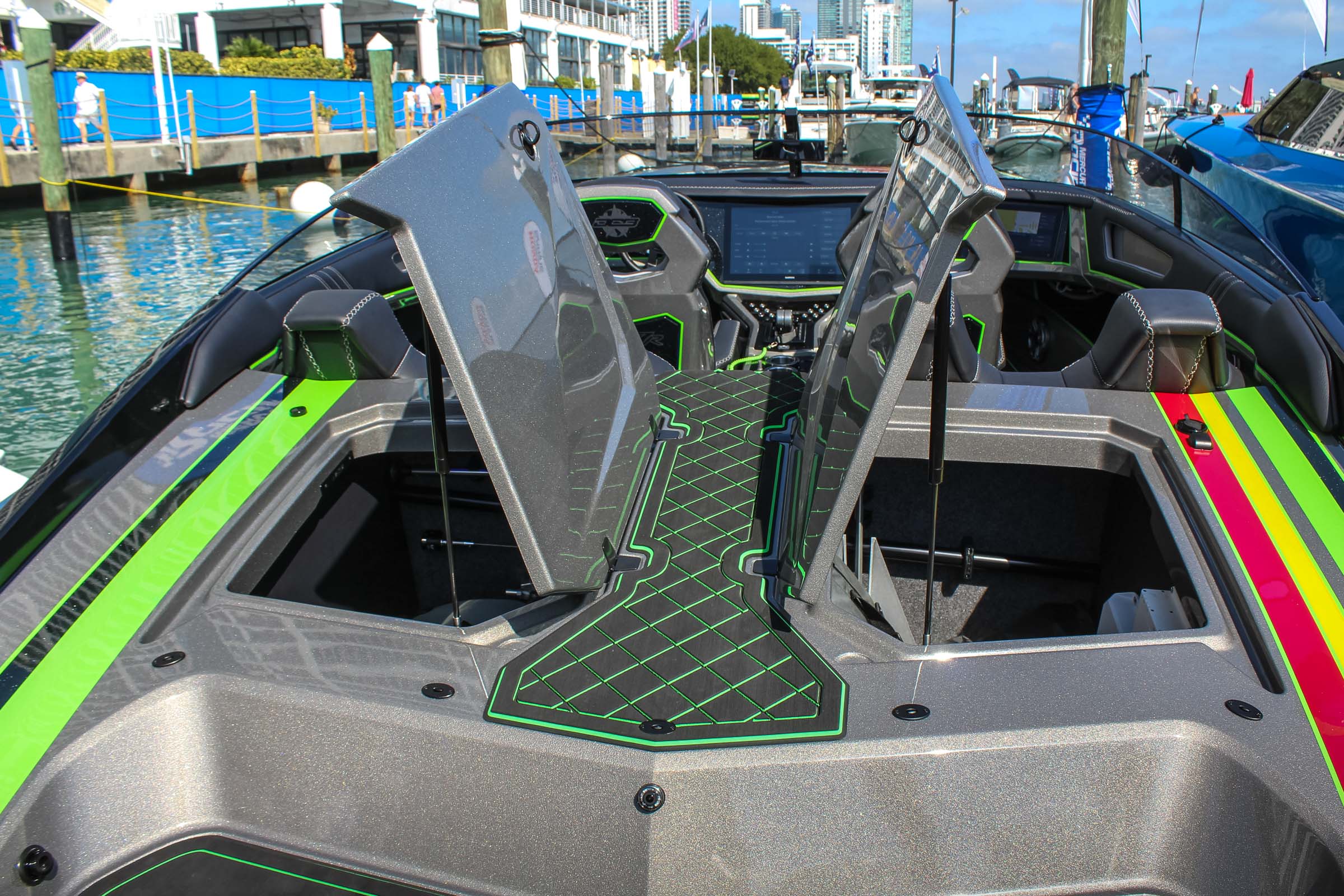 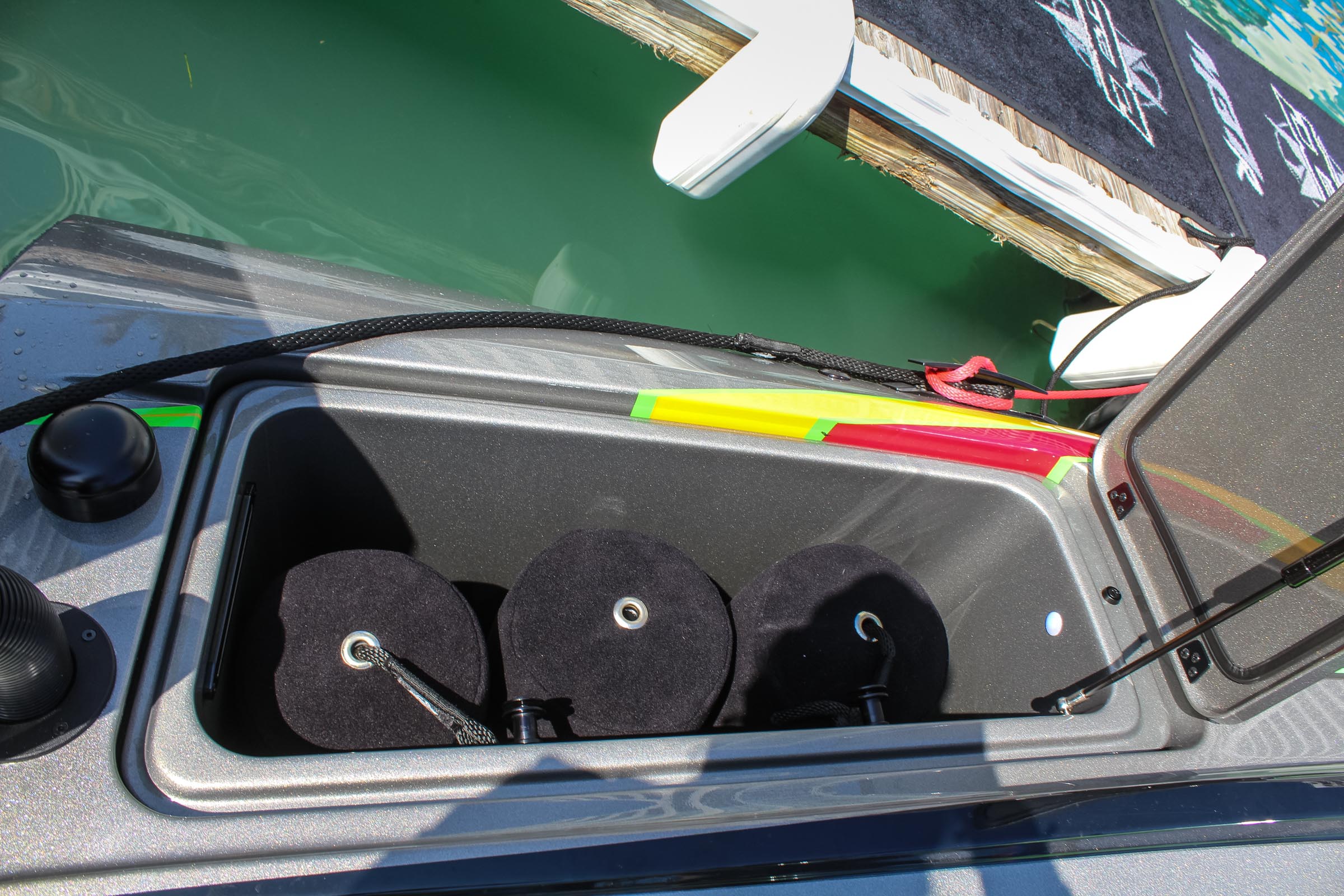 Drawing attention to every ounce of aquatic awesomeness from its inner-core DNA to its outer aesthetic appeal – the category-smashing new sport cat hasn’t stopped shaking up the performance boating industry, following its explosive 2020 launch. The “shake-up” started out in Central Missouri at Lake of the Ozarks when an exotic foursome stormed into Super Cat Fest, and it wrapped up with, vice president of sales and customer service, Tony Chiaramonte laying down a 120-mph pass on the three-quarter mile strip at the annual Shootout. Reputation-wise, running the kilo at LOTO with a very “new cat on the block” was a bold move for DCB. But the BEST part was: proving the M37R found its groove right out of the gate (or trap).

Due to its early achievements and success, demand continues to go up. Chiaramonte tells me, “We have 13 out of the mold and 22 in front waiting. The M37R is definitely winning the popularity contest. We’re basically 22 to 24 months out because we average 13 to15 a year. Our goal is to stay a boutique boat builder and do our best to keep our client base happy.”

With that said, judging from the welcoming reception DCB has received in Miami following its eight-year exhibiting hiatus; he might need to rework production numbers because the M37R has left East Coasters begging for more DCB. What’s more, the $650,000 competitive price tag can’t be beat, nor can the above-and-beyond compassionate support provided by the DCB crew that comes with the purchase.

Dialed in at Lake X​
Leading up to the Miami headliner, Mad Props had been twice splashed – each time landing smashing results. Literally! Out of the box on Lake Havasu with 90 gallons of fuel for its initial January sea trial, the twin 450R outboard-powered M37R lambasted the lake lashing out 133 miles per hour. Then, hours before the start of the MIBS, a covert operation took place in Central Florida at the hushed and gushed-over St. Cloud testing and development facility, more highly classified than Area 51.

It’s not often a sticker tells a story, but when it reads – Dialed in at Lake X – after a moment of word-digestion silence, it becomes understood every drop of speed, performance greatness and overall badassery has been extracted on that small enigmatic lake, ringed by wilderness and roving wild animals (which Harris and Alemán counted hundreds of during the boaters’ once-in-a-lifetime “X”perience.)

However, it wasn’t the wandering wildlife calculation, but rather, the three digit maximum on the monitor that mattered most. For the prop tweaking, fast mileage, fuel level mission, Chiaramonte partnered with Mike Griffiths who performs Mercury Racing’s high-performance marine engine setups. Also joining in was Grant Bruggemann, offshore powerboat racer and owner of Grant’s Signature Racing.

“To DCB’s credit, Grant has had his hands on a lot of boats, and wanted to see the M37R. I respect him immensely and to bounce ideas off each other and gain feedback was a big plus,” explains Chiaramonte. “We went through all the props they had, measuring and squaring everything up to make sure it’s all in line, then playing with different diameters and pitches. Mike and Grant got 129 mph with the 36s. We hit 130 mph with the same set-up in Havasu. Realistically, with 34 to 36 inch props, it will run between 125 -130 mph.”

Jeff Johnson, president of DCB, proudly adds, “The biggest plus of the day was hearing the guys say, ‘You don’t have to change a thing!’” 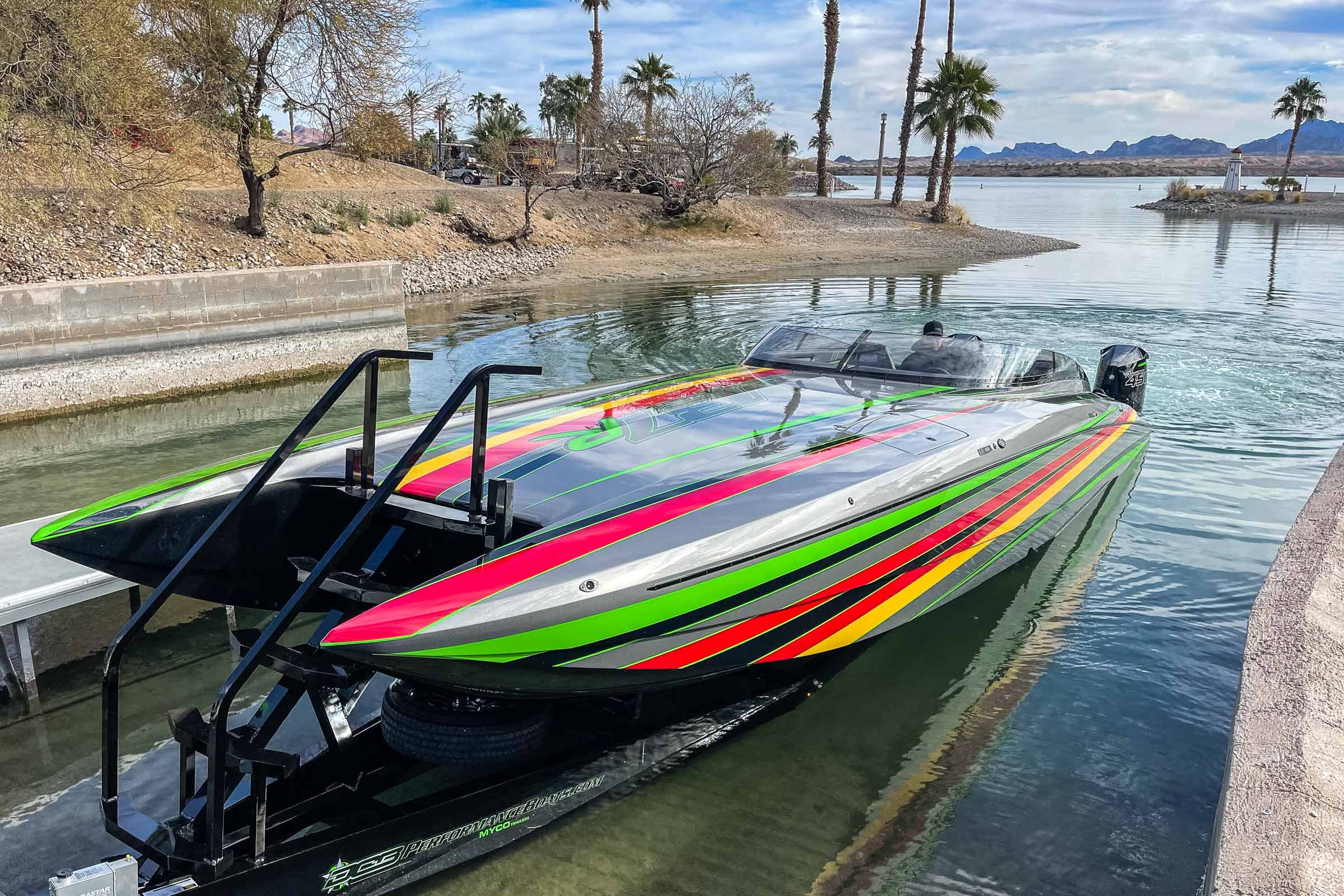 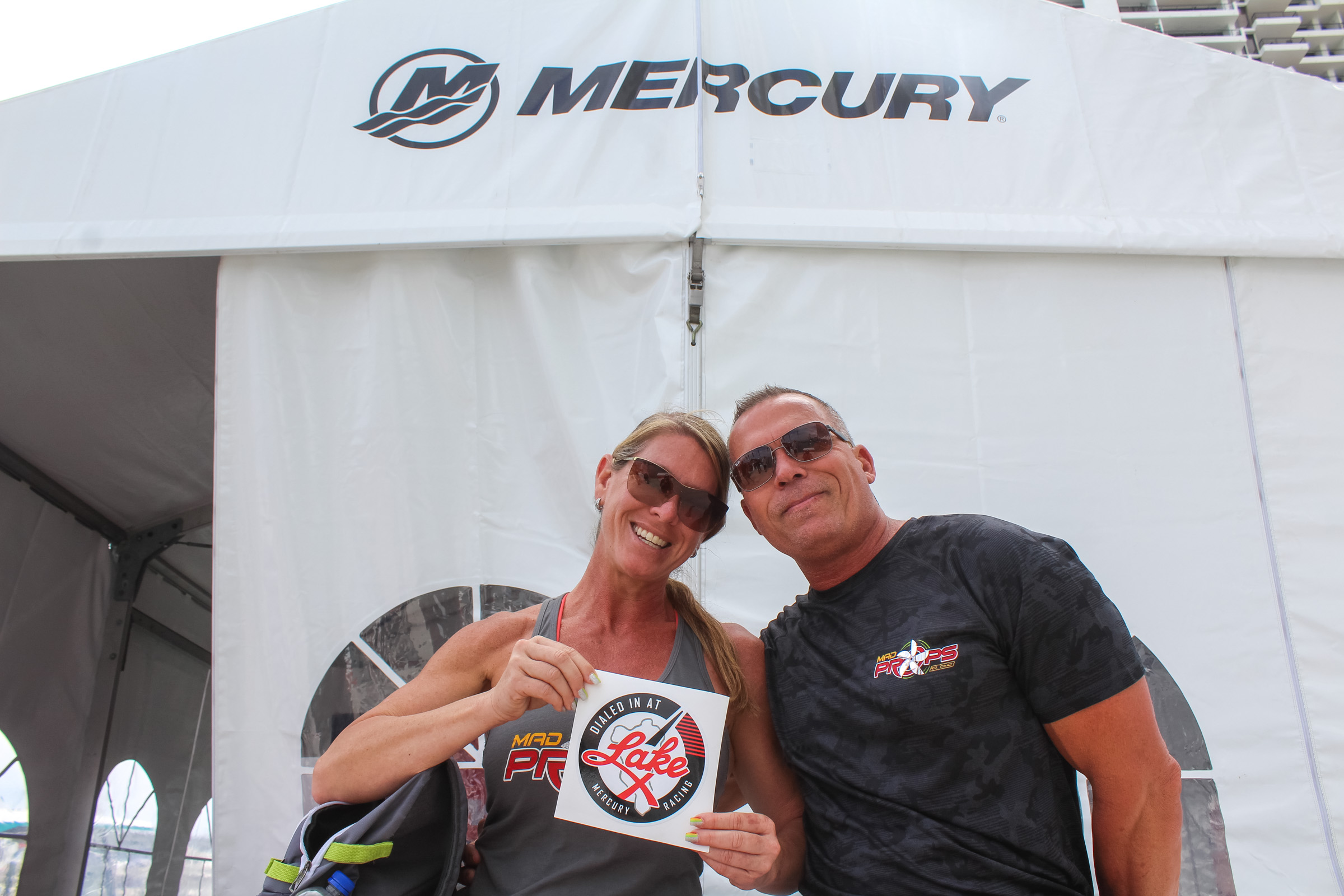 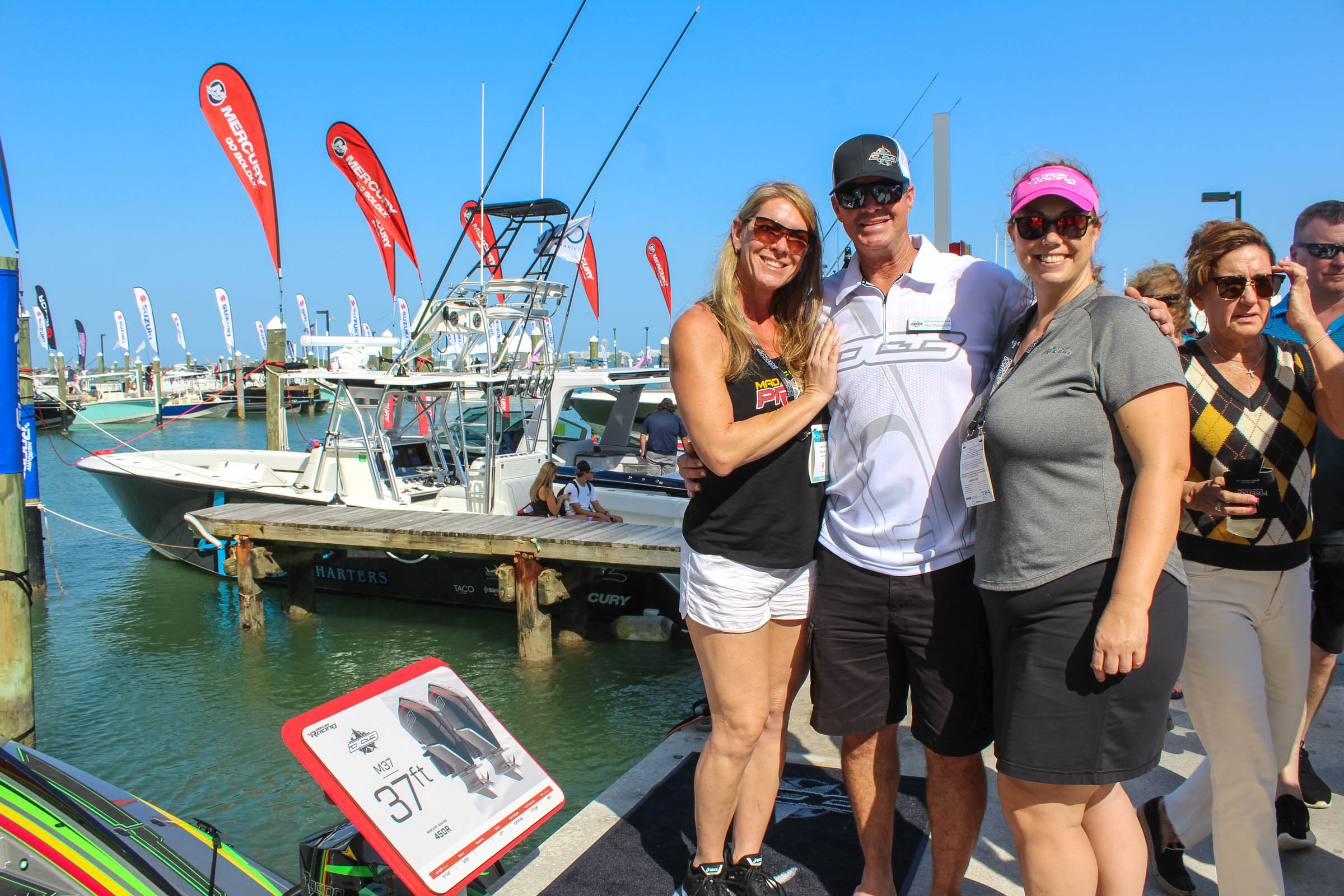 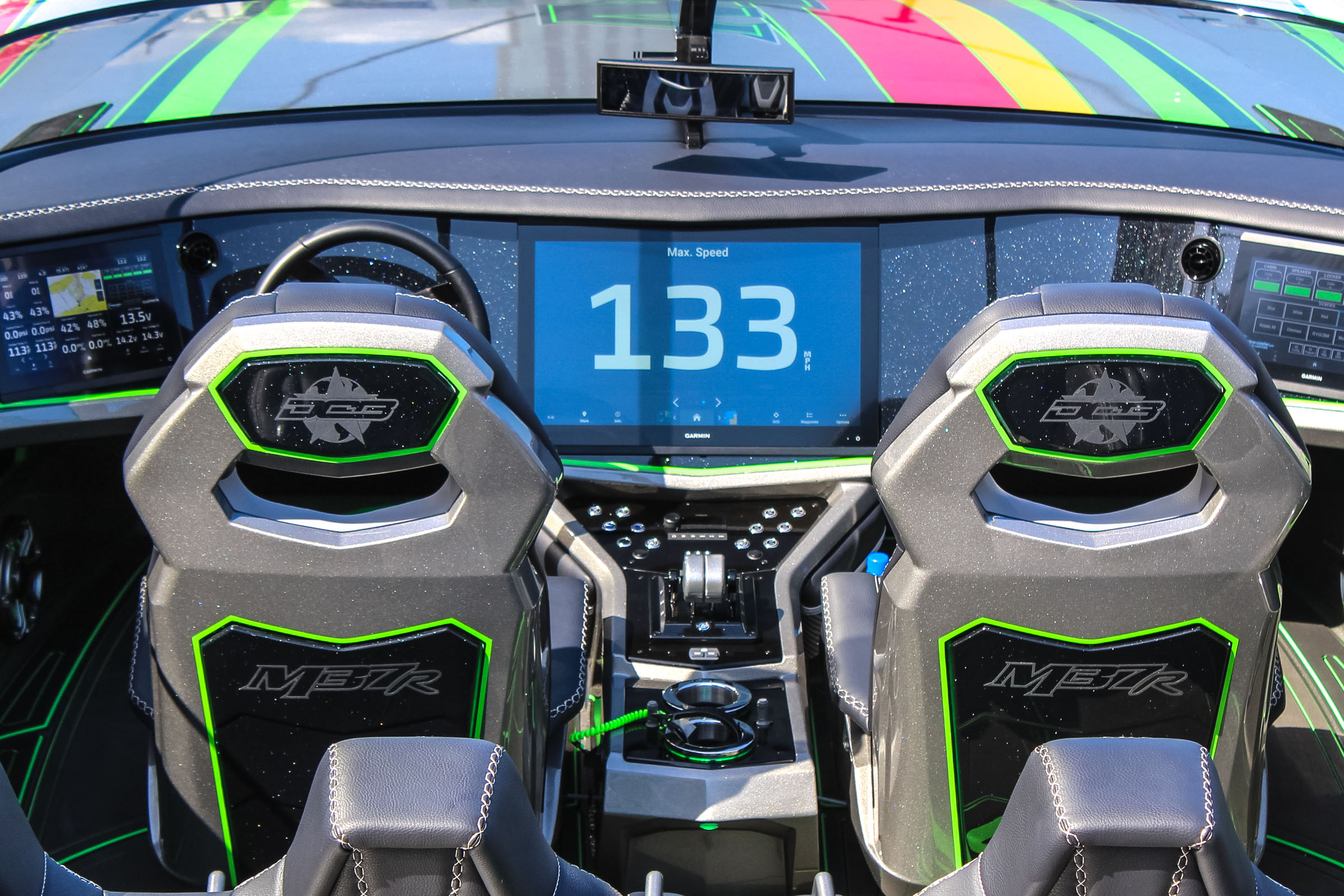 A Creature Comfort Cockpit of Extremes​
Next up, Mad Props hit the salty Miami waters for five days at Sea Isle Marina. Glaring at the go-fast fixture from the docks, the sparkling black galaxy gel coat coupled with the flamboyant glowing green takes your breath away. But on Saturday morning my opinion changed… for the better! Looking at it from my upgraded onboard view during my short-but-sweet sea trial… you can’t help but notice the smoothness of the gel coat combined with the glitter factor is utter next-level insane!

Harris lays out the gel coat history. “It’s a collaborative and time idea. DCB does it as a rule. It’s easy to lose control of the time frame when you send a boat across the country, sometimes six weeks ends up being three months. We pushed them to the limit with the number of colors, metallics and fades. Green carried through all our boats. It’s our color together, but the yellow was Yvonne’s insistence.”

Chiaramonte chimes in, “DCB opts for gel coat because its 100 percent pigment and resin. There is no paint. It’s really like comparing a concrete driveway to an asphalt driveway. The taping, spaying and the clear, are all done in reverse, and already hardened when being pulled from the mold. The boats come out finished, and need only to be polished and rigged.”

Apart from the hyperbolic hues, the entire boat is a nautical work of art. The recessed dash, tooled all in one piece and stretching around the sides, made it possible to install the larger center Garmin (Simrad displays are also an option) seeing that, nothing needed to be top mounted. Even from the back seat staring at our soaring speed level as the master throttle manipulator maneuvered Mad Props through the chaotic all-directional chop in Government Cut, I had a perfect view of the front screen.

Albeit, quieter than a set of snarling stern drives, the 450s generated an instant adrenaline-induced joy… 50 mph was suddenly 60 mph, then 70 mph and well… you know! Until exiting the cut for a quick banshee blast northbound to get a sense of how hardcore the lightweight 6,000 pounder competently handles any wave thrown its way, Chiaramonte continued to multi-task, filling me in on more DCB-esque accouterments, “For those sitting in the cockpit wanting to escape the sun, we mounted a plate inside the cup holder between the front seats, because on the West Coast boaters tend to hang out more onboard as opposed to over here where everyone cruises from one spot to another. It’s not just a tube, but like a patio umbrella, custom made and branded with DCB. Greg has the first one.” 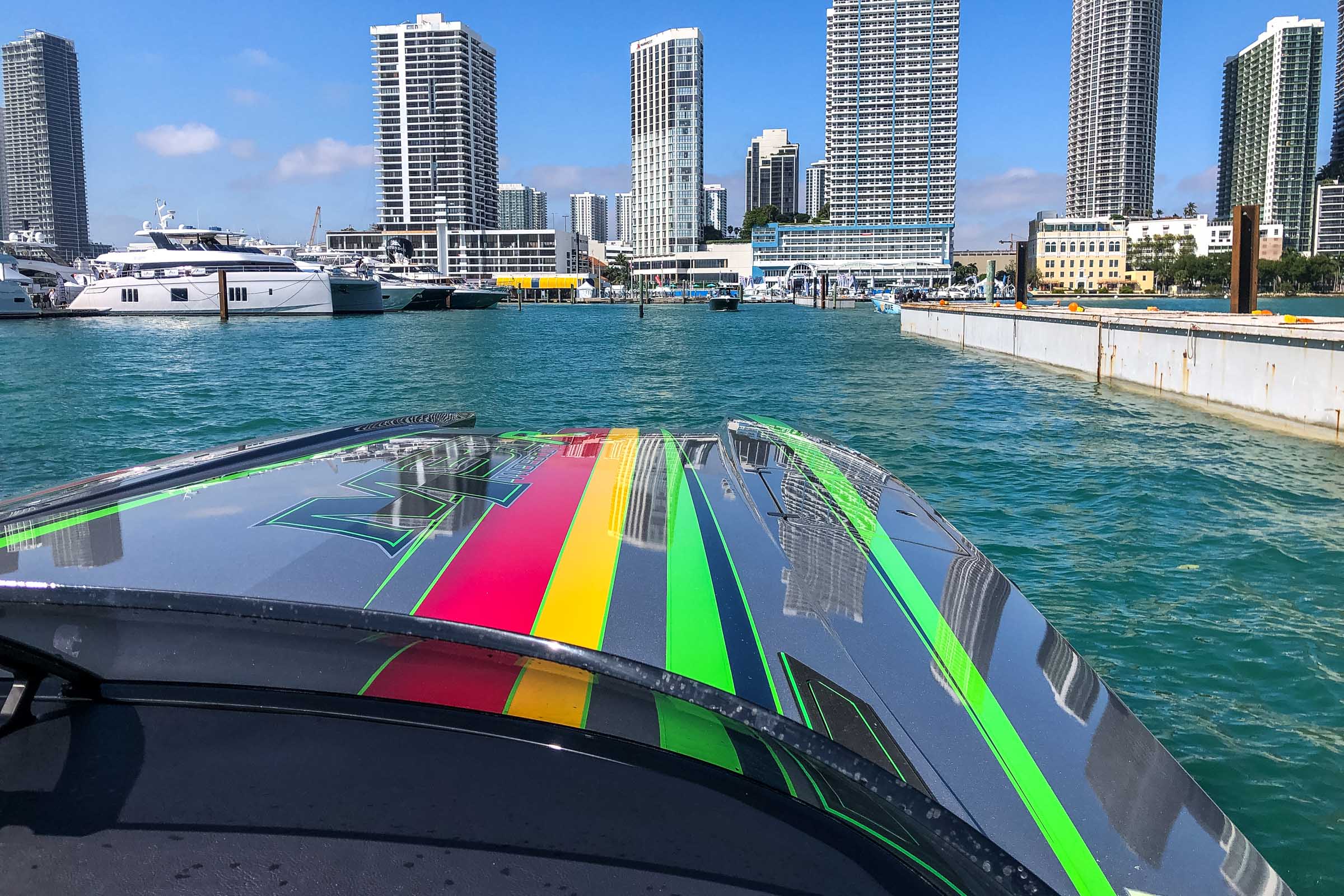 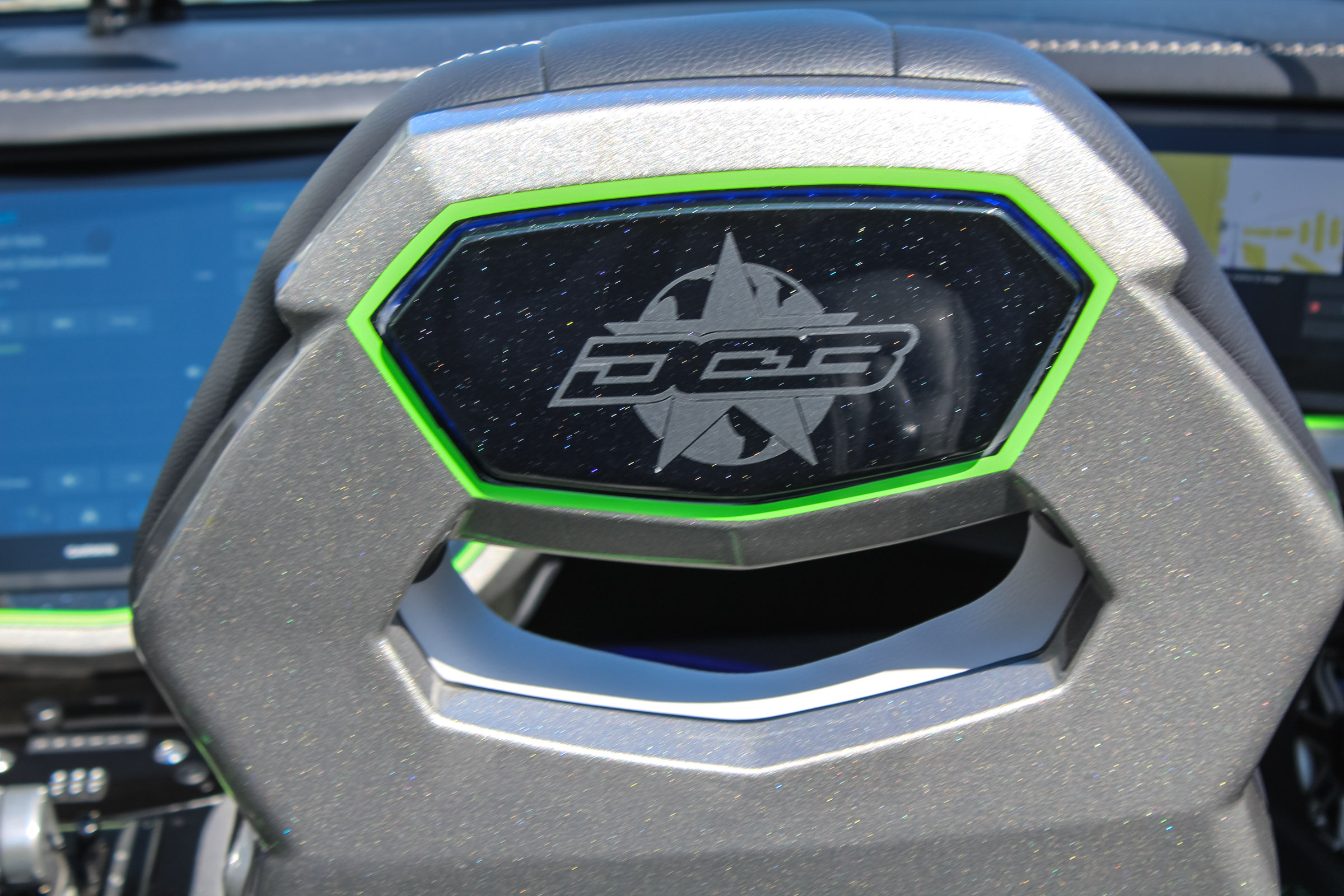 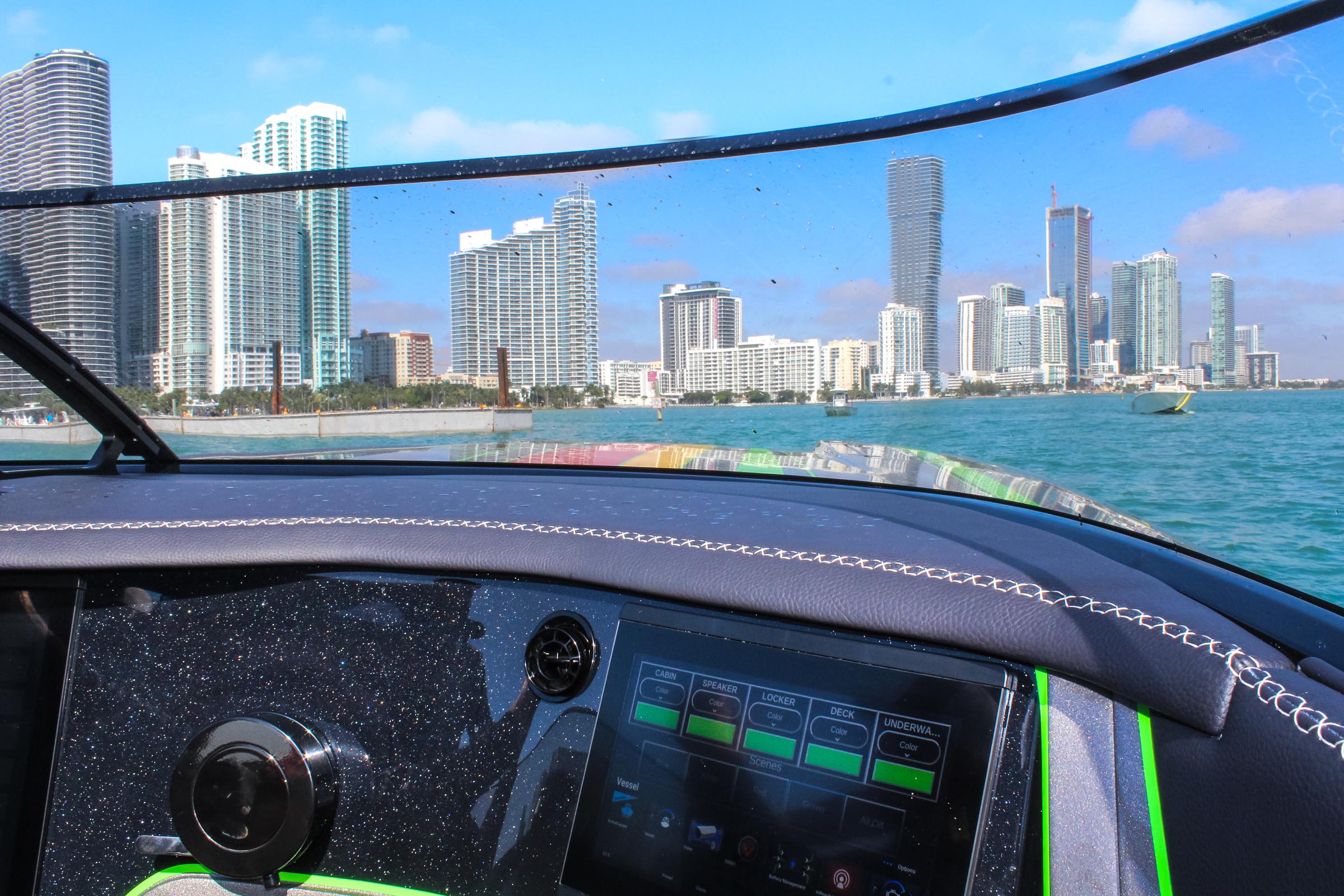 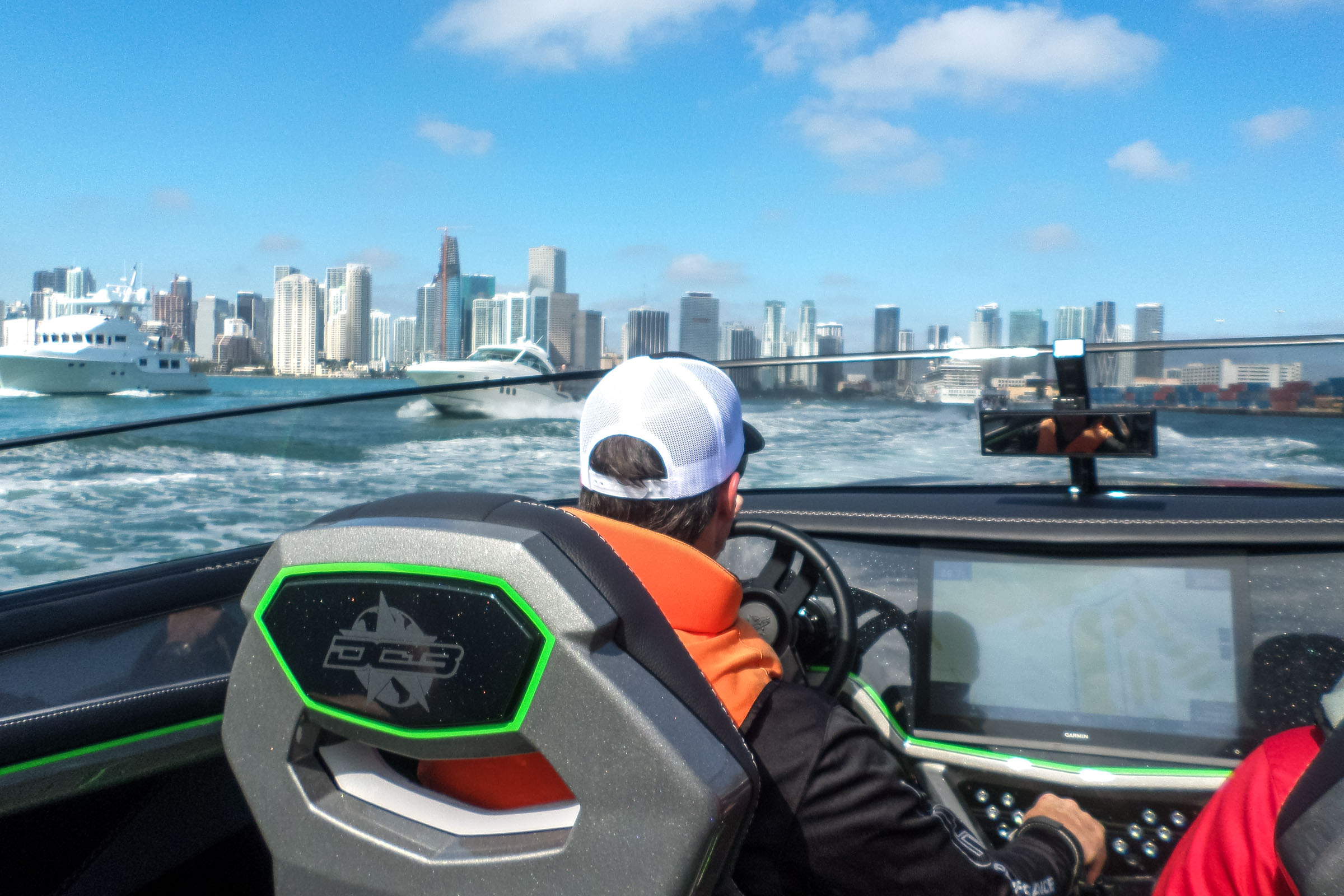 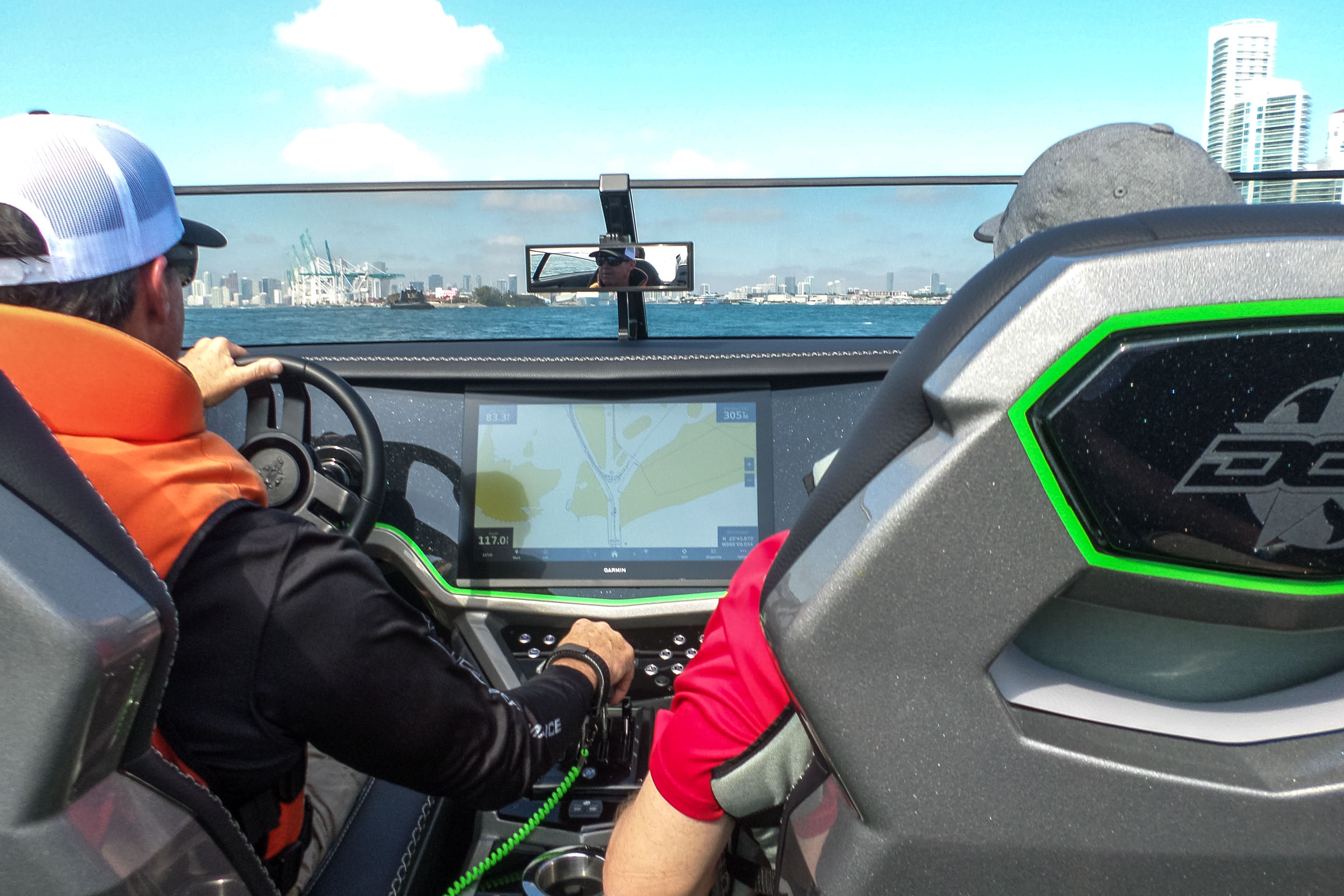 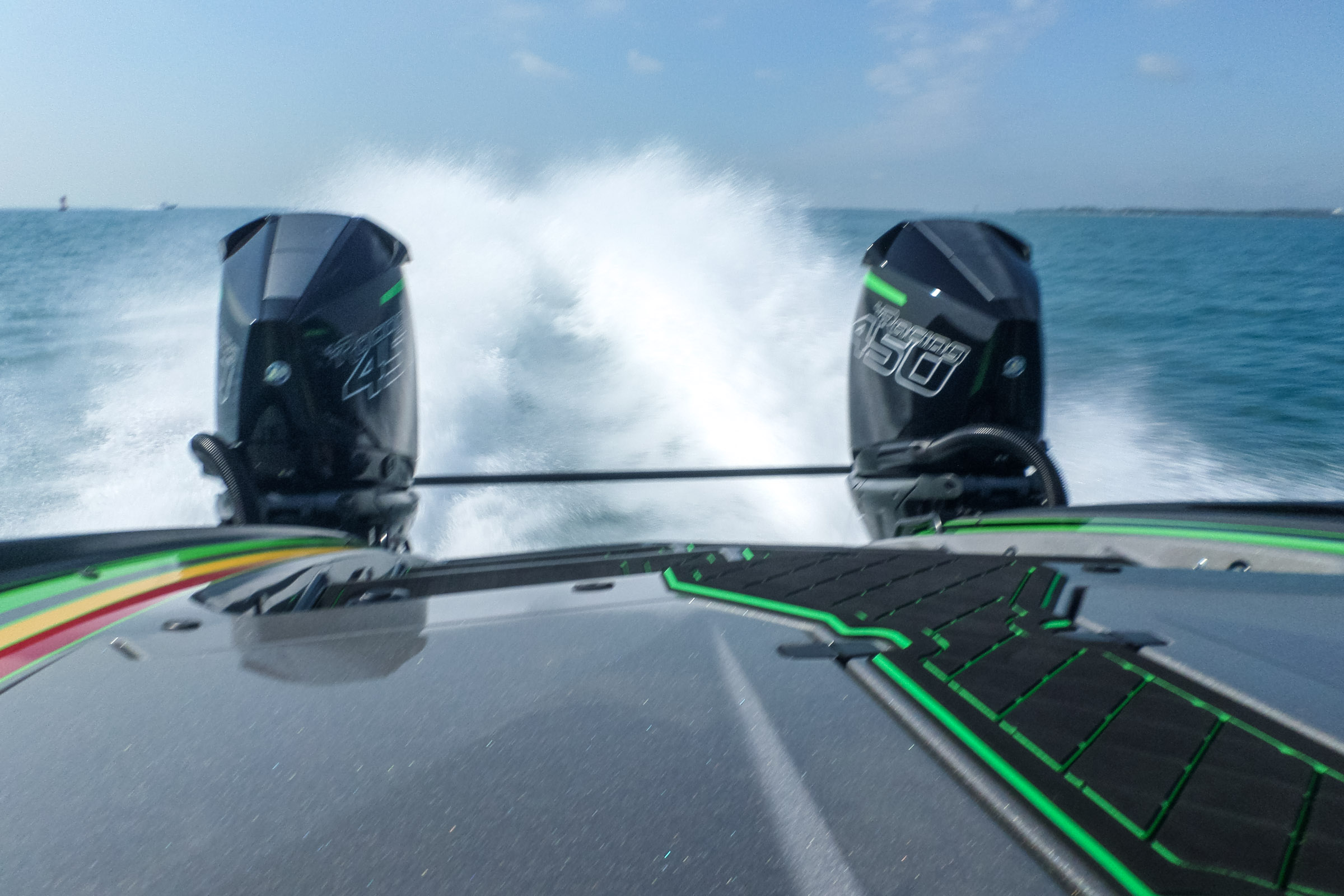 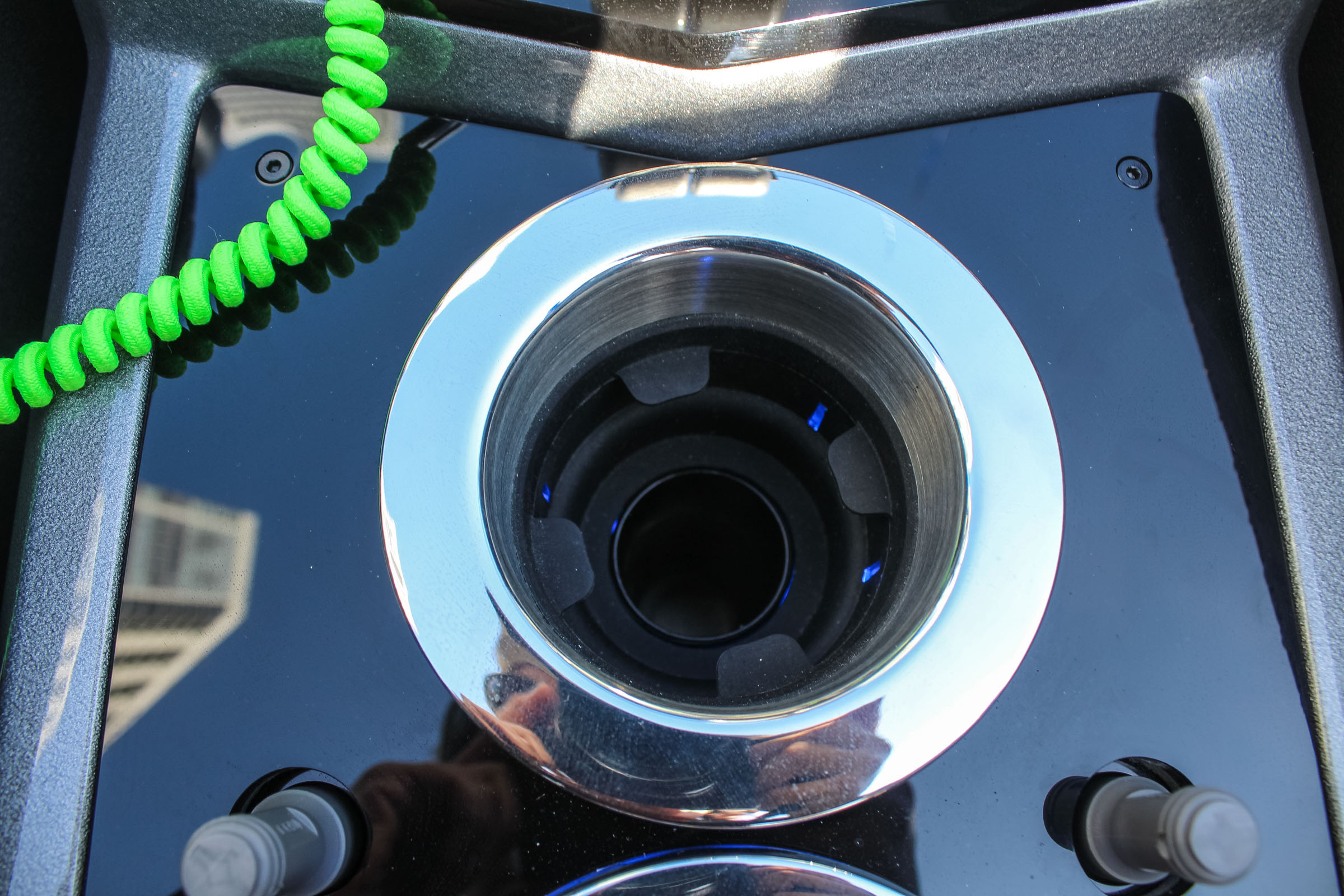 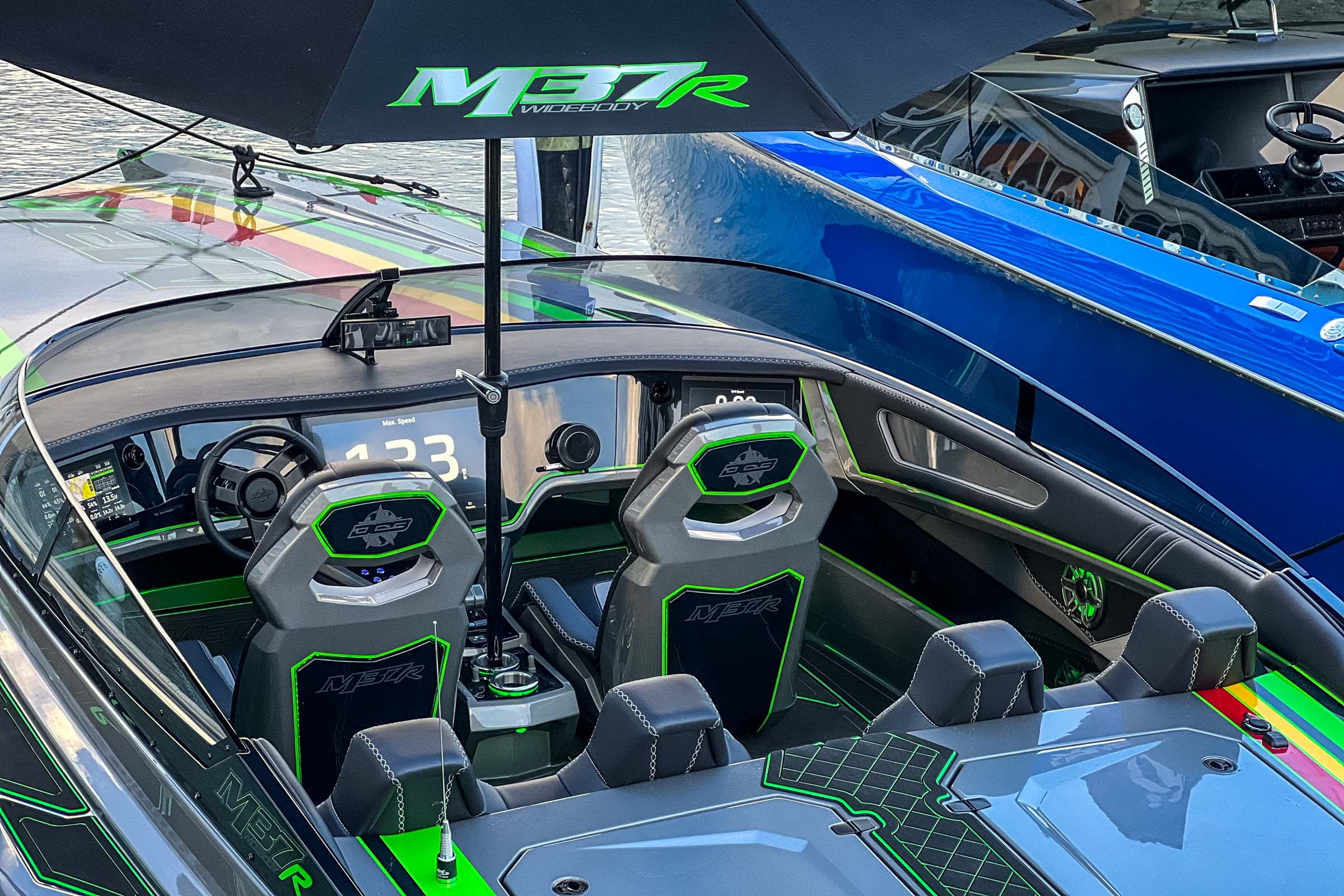 DCB’s also got your back, with two additional rear cleats for mounting a second sunshade to cover the transom. To further reduce baking in the sun, the interior is done in 100 percent Cool Touch marine vinyl. Climbing all over the cat for photos in a steamy near 90-degree day, I can confirm its coolness. As for the flawless stitching and upholstery detailing, I was obsessed with dragging my fingertips across the embellished signature logos adorning the entire interior.

Moving forward, a dual helm allows the twosome to swap the steering wheel from port to starboard by simply popping out the helm hub; and the multi-functional padded mesh pockets are great for securely stashing the smartphone, and not bashing your legs against the inner sides.

Securing electronics is crucial, but keeping them charged also has its merits; hence, low-battery mode will never be a problem, thanks to 12 USB charging ports stationed throughout the cockpit. While poking around scoping out the ports, I decided to tally the JL Marine Audio speakers too. Equipped with eight 6.5-inch speakers, two 12-inch subwoofers, and enough color-changing LEDs to rival the Space Miami dance floor – this M37R is where the party’s at! 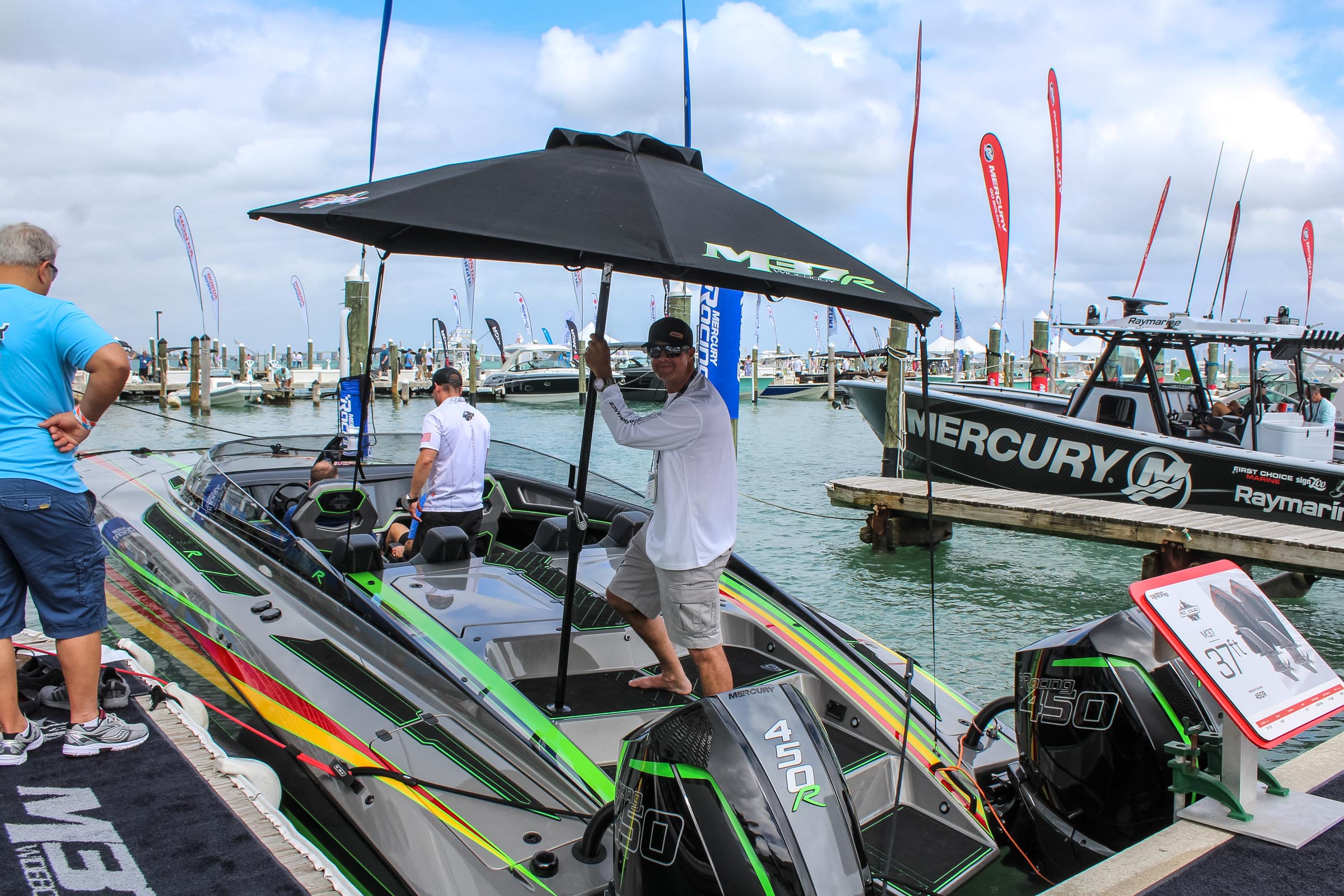 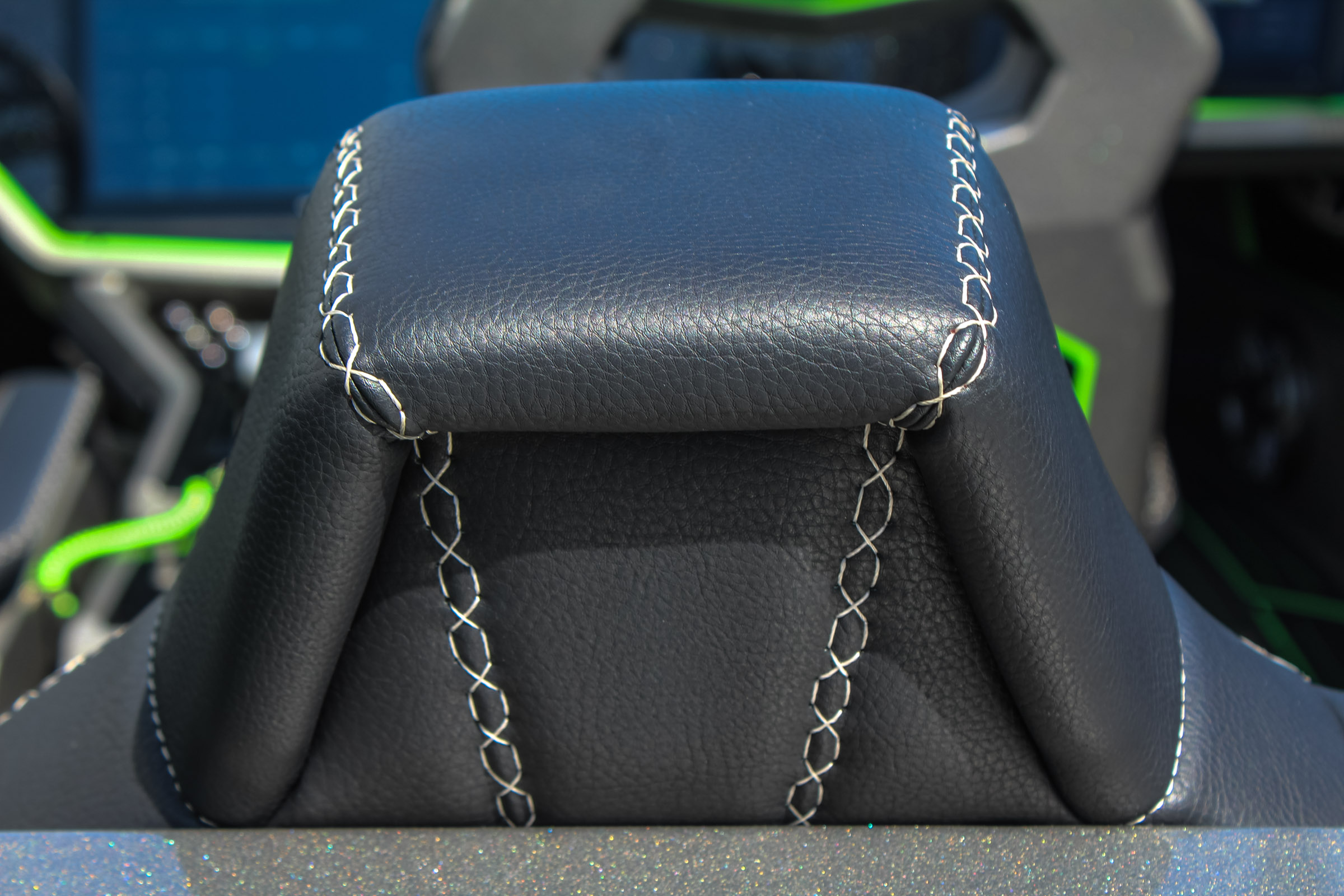 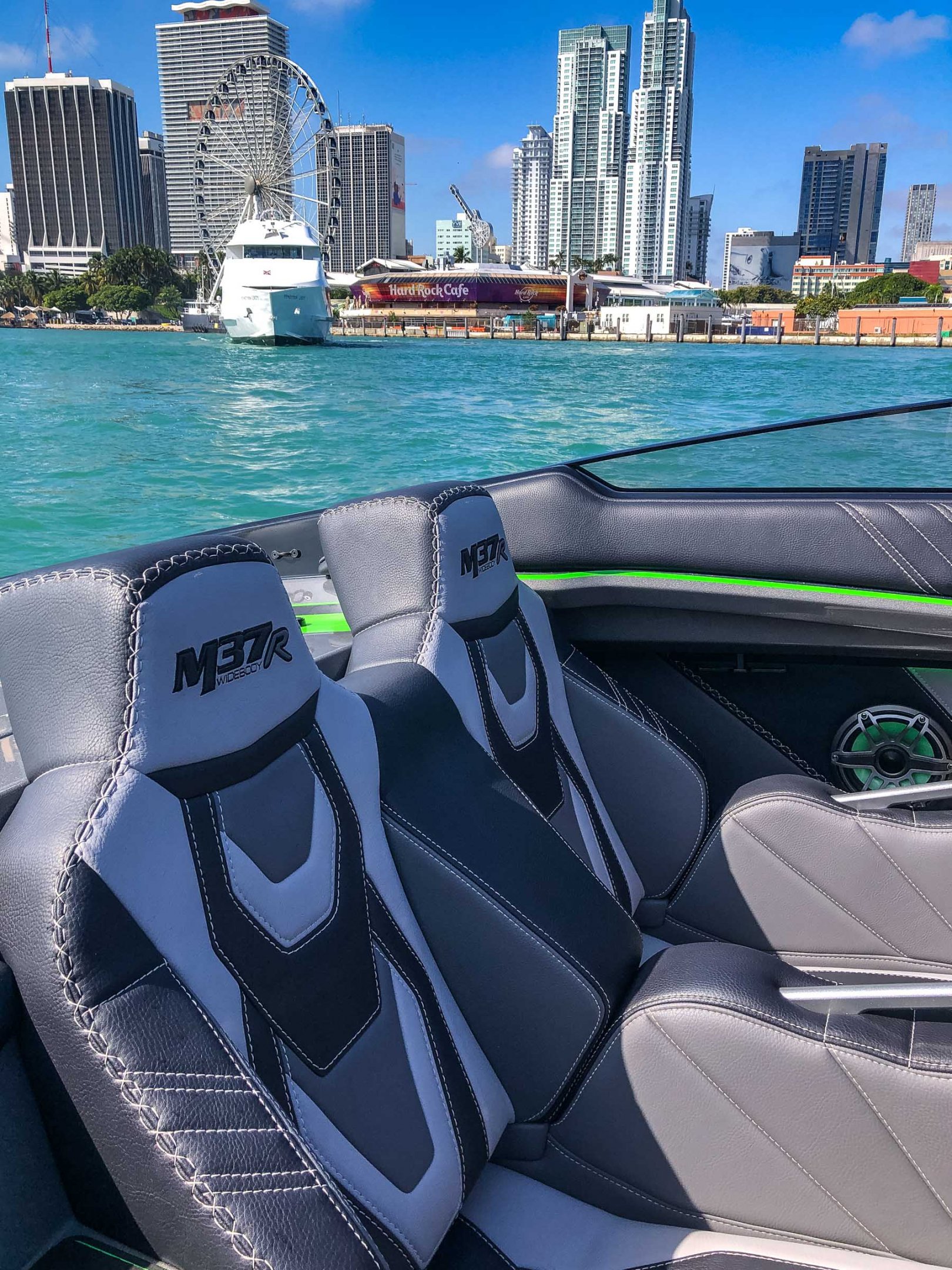 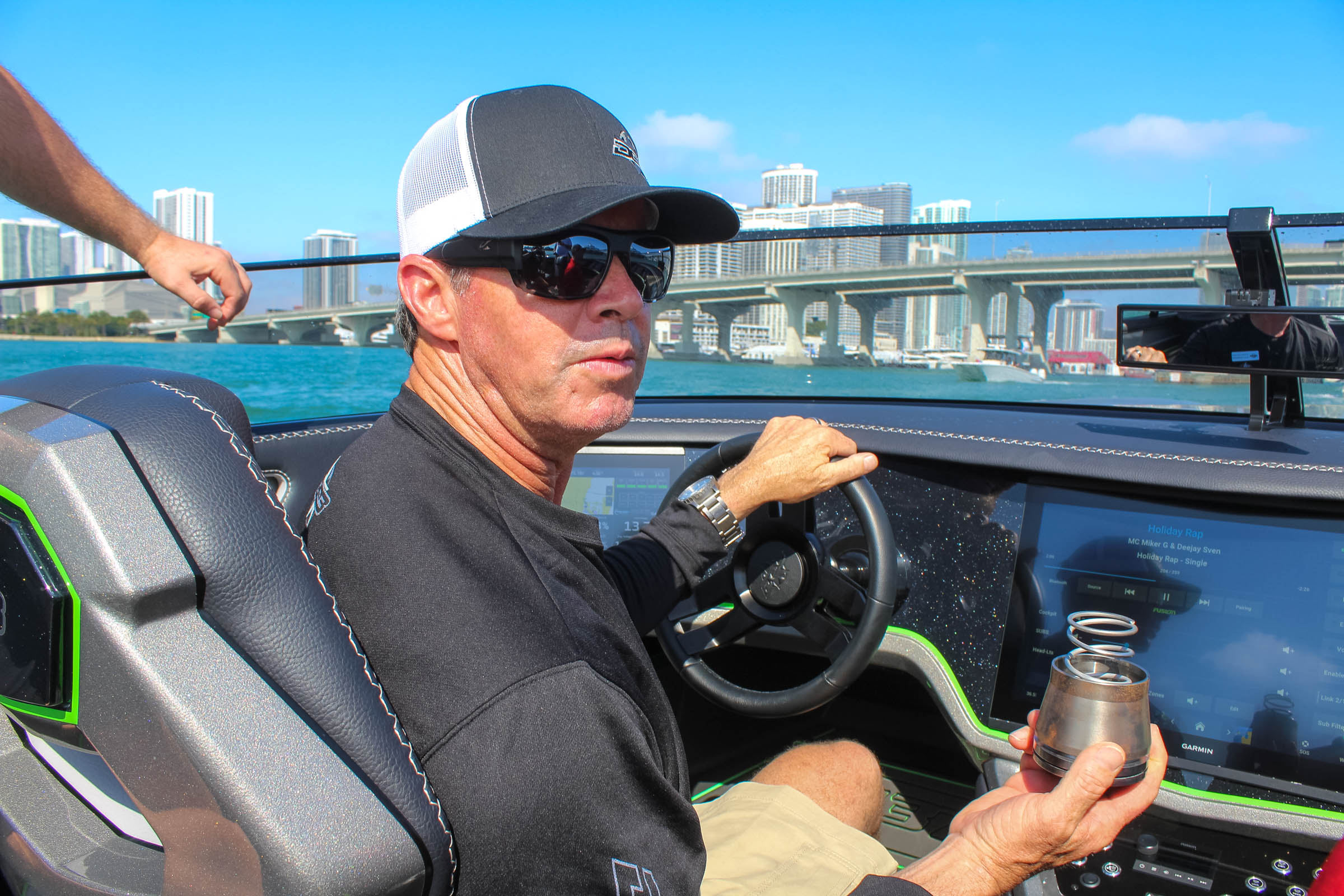 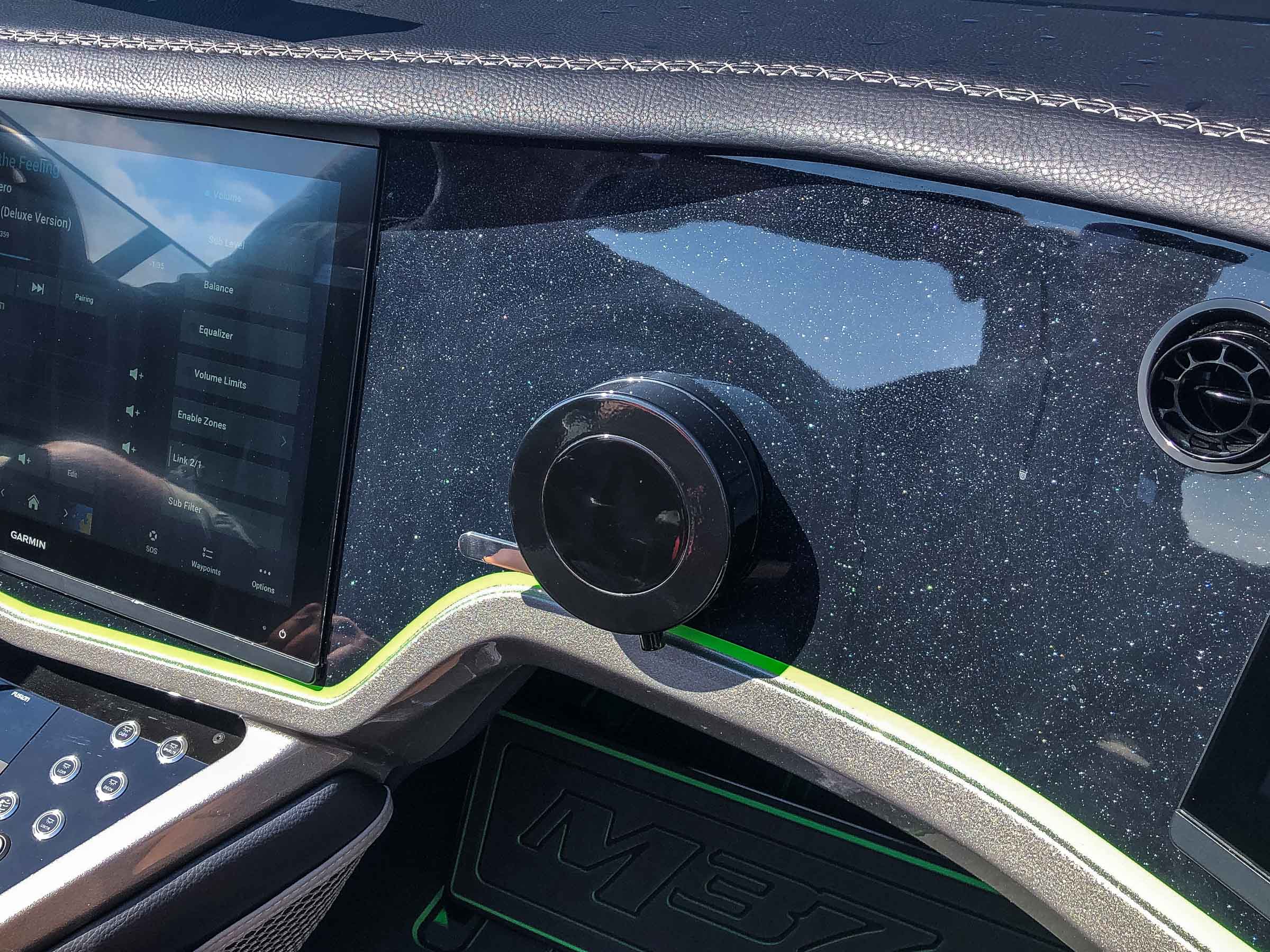 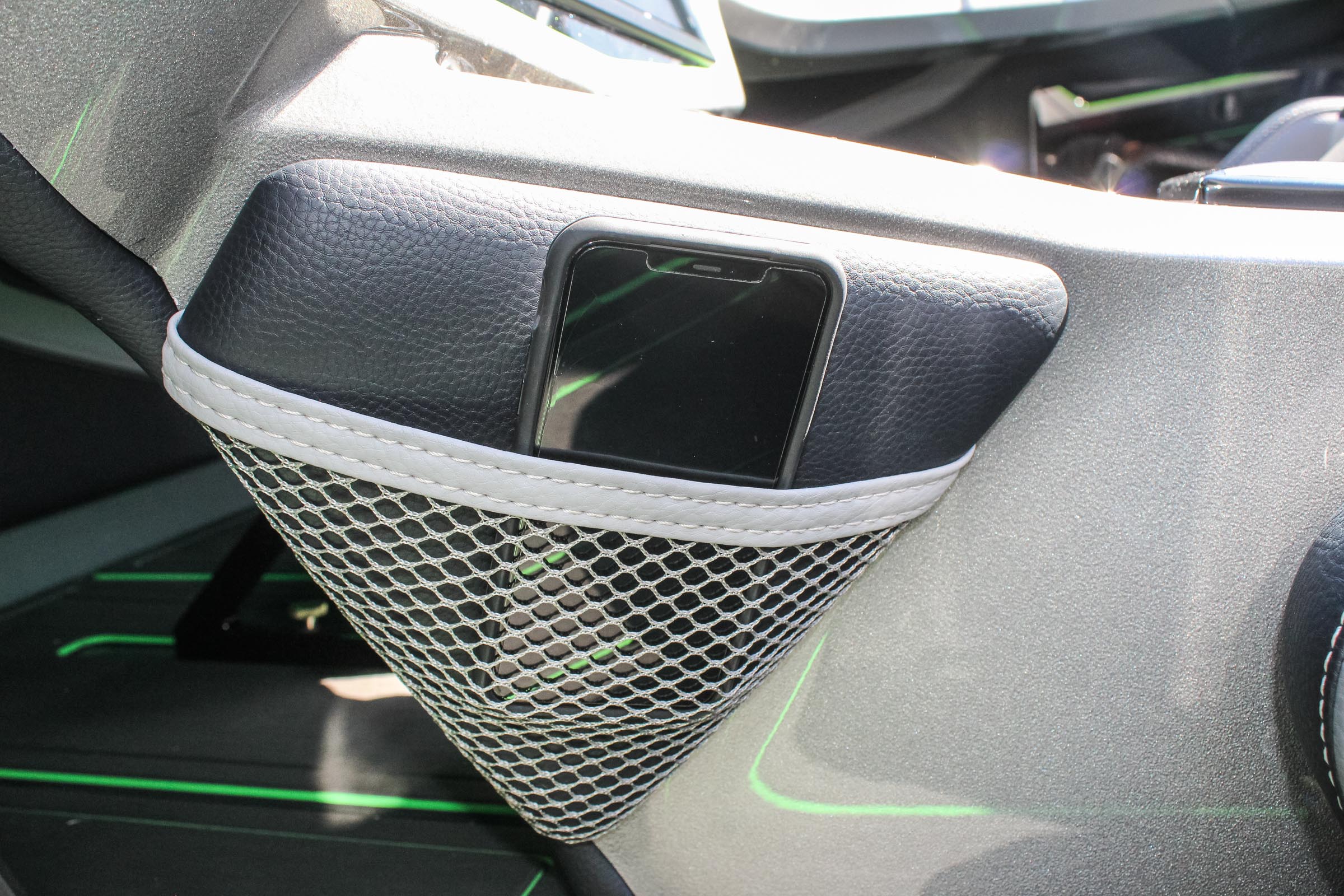 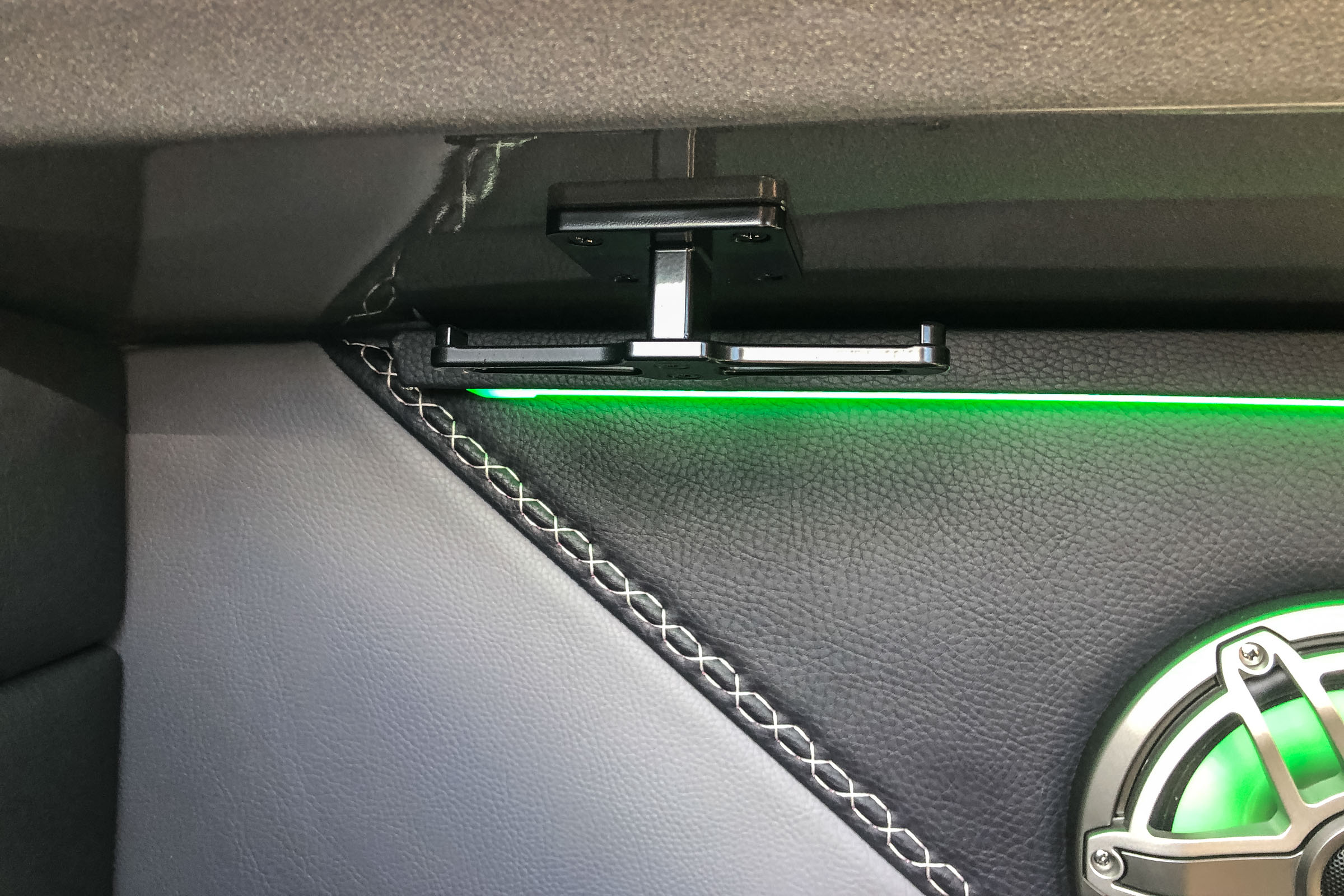 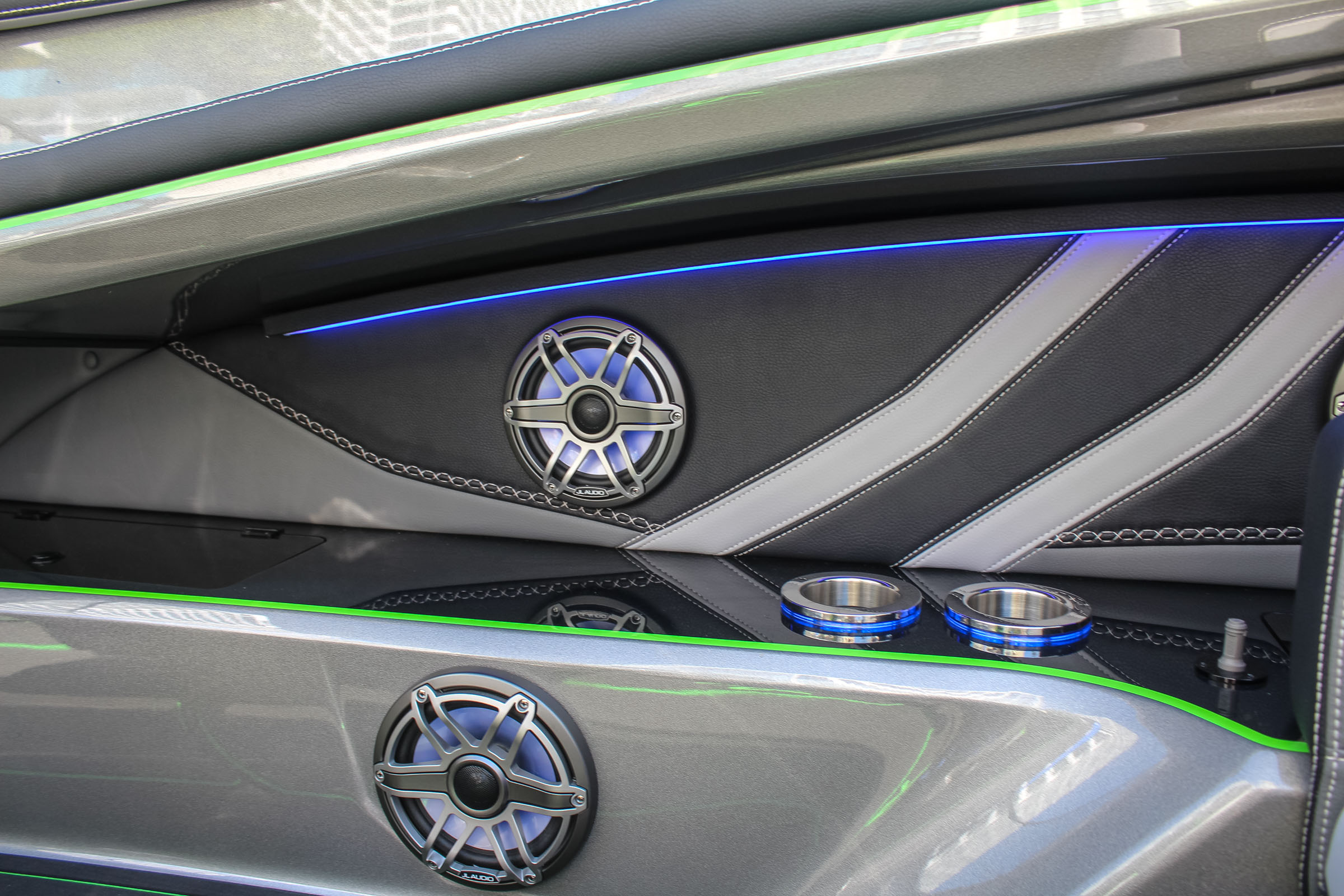 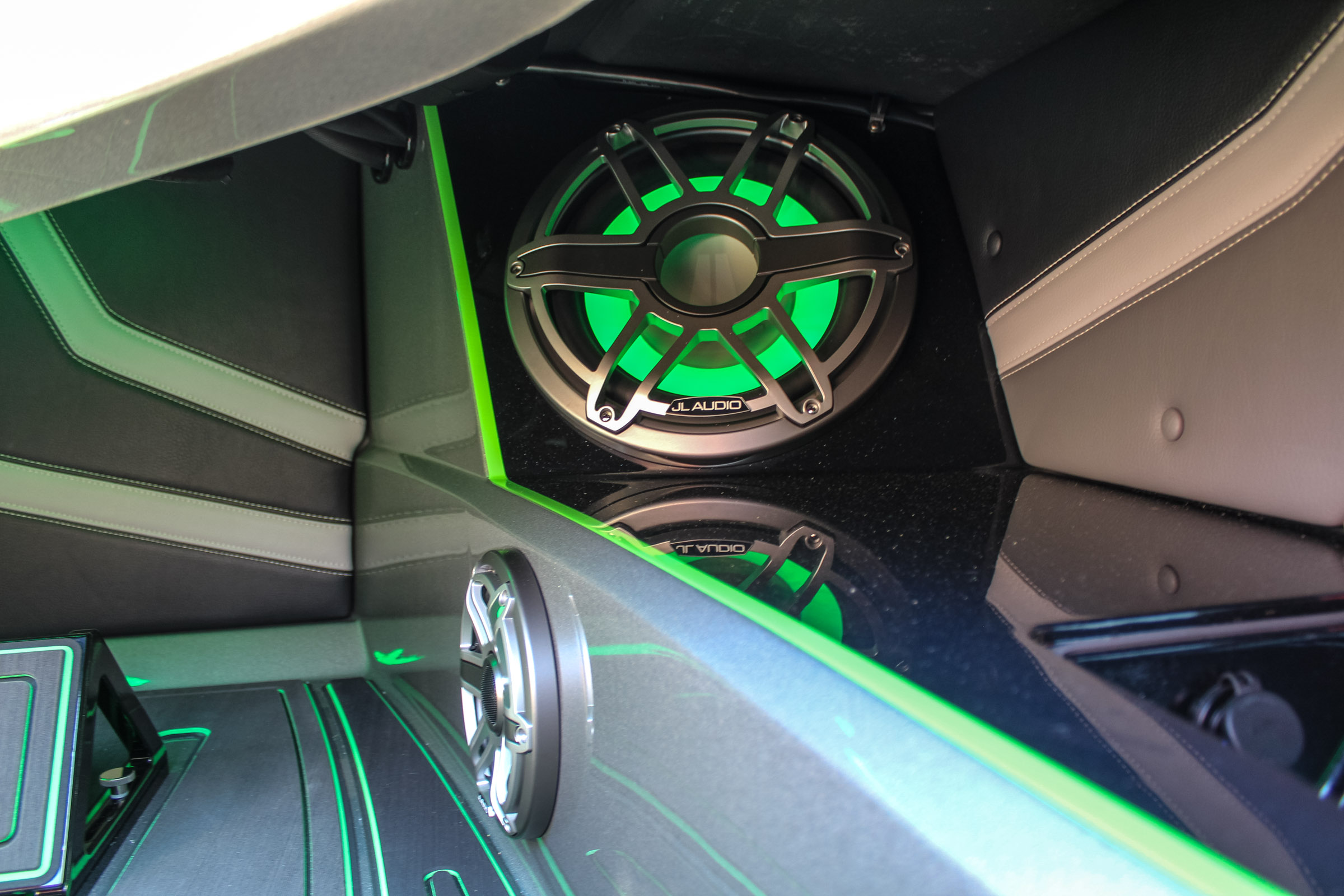 Harris and Alemán Are “On Their Way”​
Speaking of a party, we end with some final personal insight from the party of two about their first few water-based flights in the M37R. “We’re used to running with headsets, but DCB has their own channel configured for special VHF boat-to-boat communication, giving all owners the ability to talk back and forth. This is a first for us. It’s great,” Harris interjects with a big grin, “That’s why DCBs are always in perfect formation for photo shoots.”

Expect to soon see Mad Props in the upcoming line-ups with their new fastboat family, but while waiting on future photo ops, the fun runners will be live “in person and in powerboat” making a mad dash around the nation hitting up the major 2022 events, first returning to Lake Havasu for Desert Storm, followed by a series of LOTO runs, and eventually back home to Florida for the Jacksonville Poker Run, organized in part by the duo. While truckin’ from coast to coast, a painted aluminum trailer, MYCO-built and Adrenaline-tricked-out, housing a ladder light system and LEDs built into the strobes, will be doing the transporting.

Reverting back to the headsets for a final question, I wanted to know what tracks they’d be listening to when not connected to the DCB channel. Alemán was quick to reply with this trio: DJ Fluke “Seven Nation Army;” Krewella “Enjoy the Ride;” and Tiesto “I’m On My Way.”

I think it’s safe to say the South Florida Mad Proppers are well “on the way to enjoying their ride!” 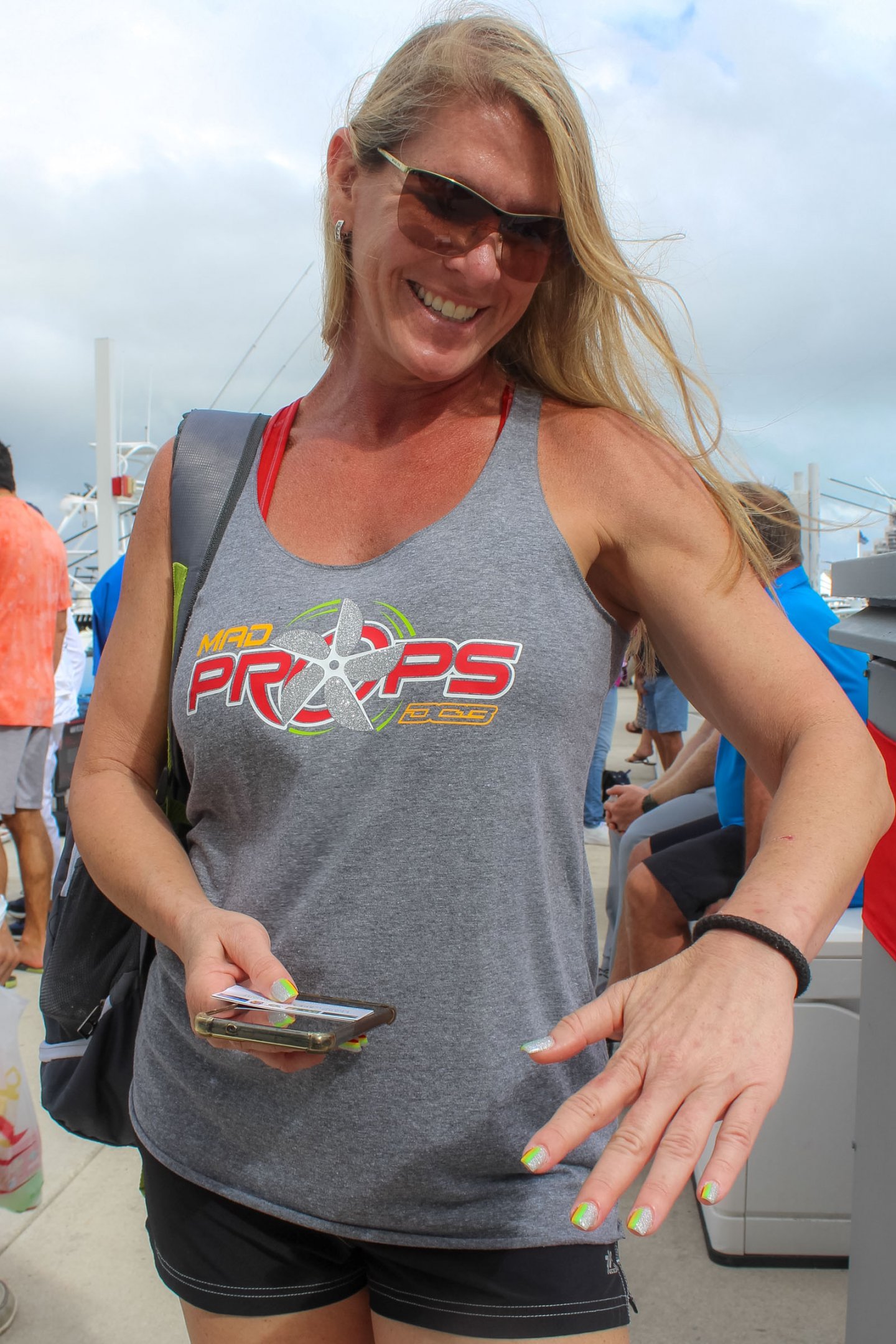 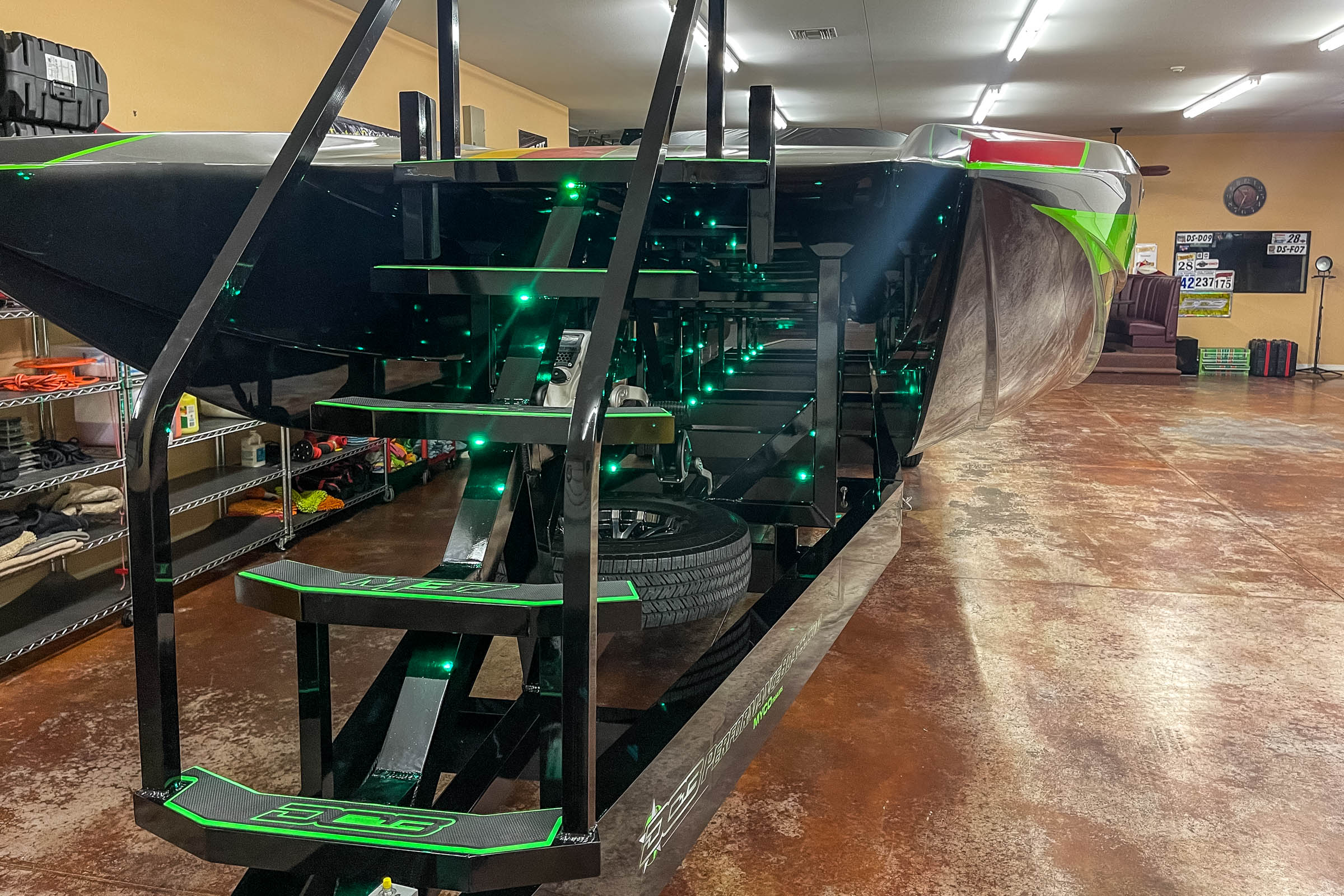 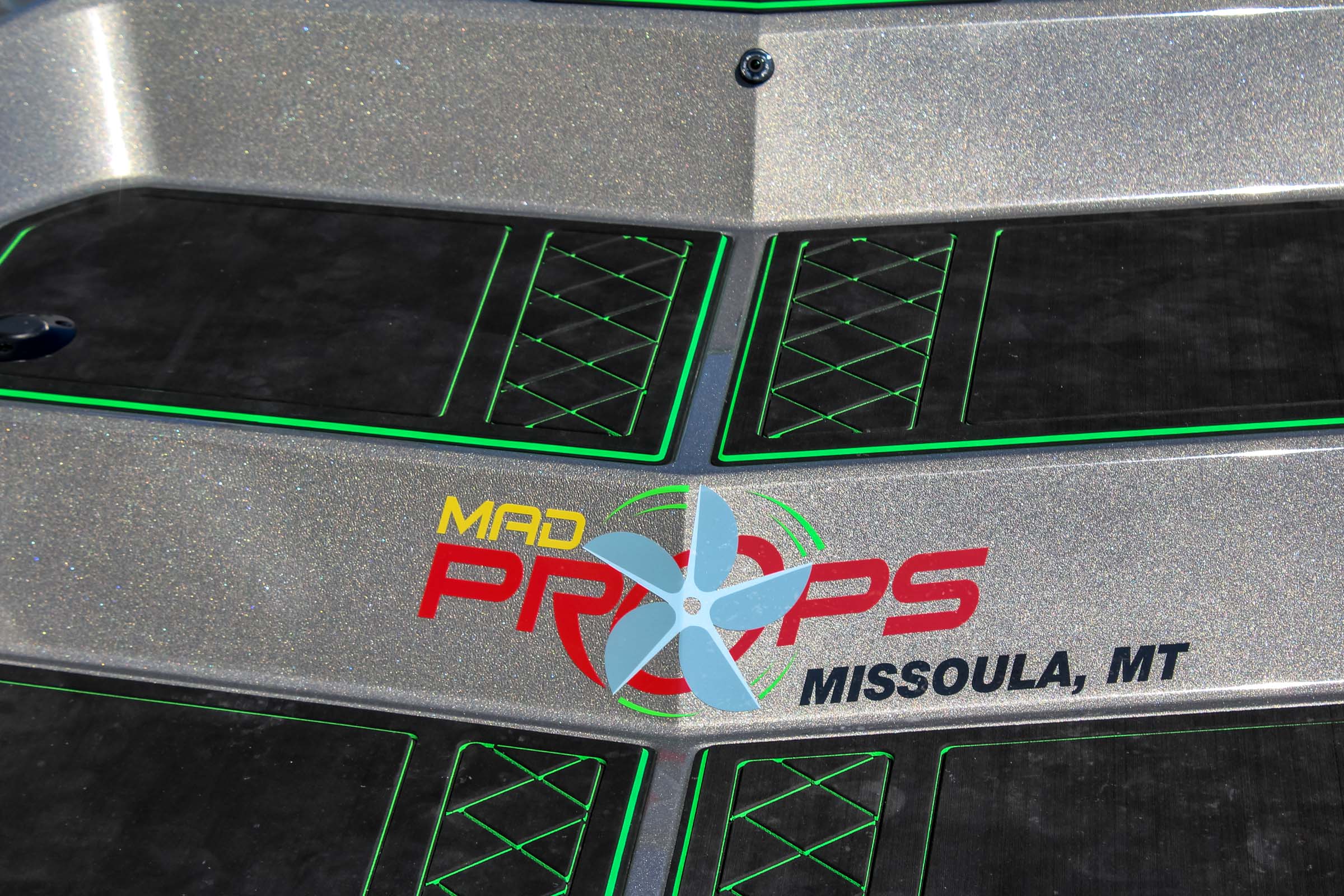 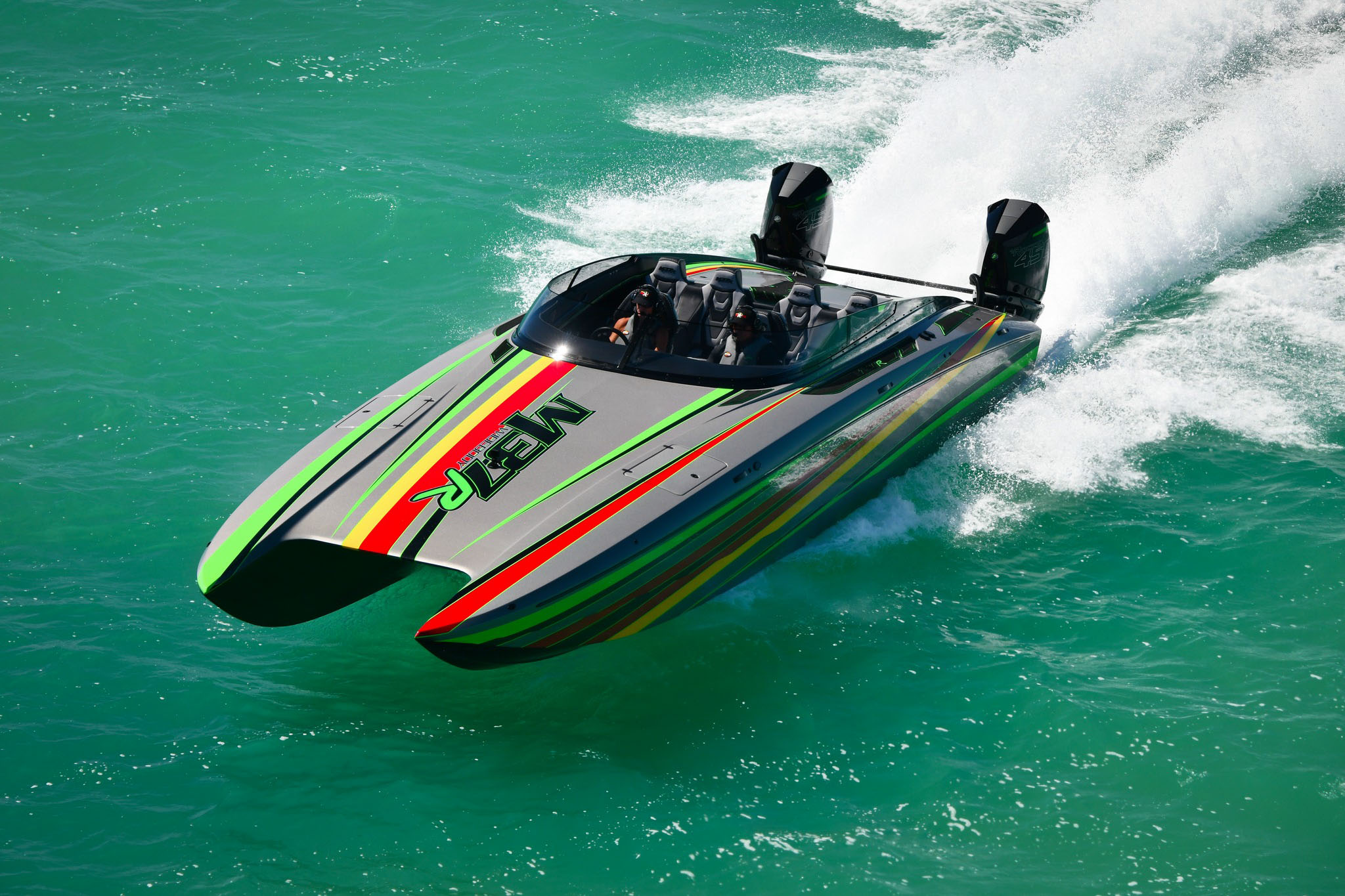 Less than 72 hours after the MIBS called it a wrap, the DCB team and Harris and Alemán headed down to Key Largo on the Florida Powerboat Club Miami Boat Show Poker Run. Decorating yet another South Florida dock, Mad Props was front and center on the manufacturer’s pier alongside Mauricio and Angie Vivanco’s DCB M44 Widebody DLA… the Keys story shall soon follow!
Reactions: HB2LHC, Desert Whaler, Cash Bar and 1 other person