Miami Welcomes "Back in Black" Thunder

"No one ever asks you to start your outboards,” joked John of Black Thunder Offshore Marine, as we chatted on the Sea Isle Marina demo dock of the Discover Boating Miami International Boat Show (MIBS). While whimsical, York's ascertainment was 110 percent on point. What's there to hear or get hyped up about... hushed, infinite configuration turn-key outboards being clipped on transoms everywhere you turn?

Insatiable sounding stern drives are rapidly becoming a thing of the past as demand continues to dwindle. Scoping them out at a boat show or poker run is becoming as challenging as finding a manual transmission auto, CD or flip phone. Luckily, I drive a six-speed, still burn prehistoric CDs, and my step-dad insists on a flip, so I'm not losing sleep over these obsolete oldies but goodies. What's disheartening are the disappearing powerplants – and the primary reason Black Thunder Powerboat's return back to the Miami Show (under new ownership) absolutely saved the day with its 2022 high-performance hardware debut of the 43-footers. 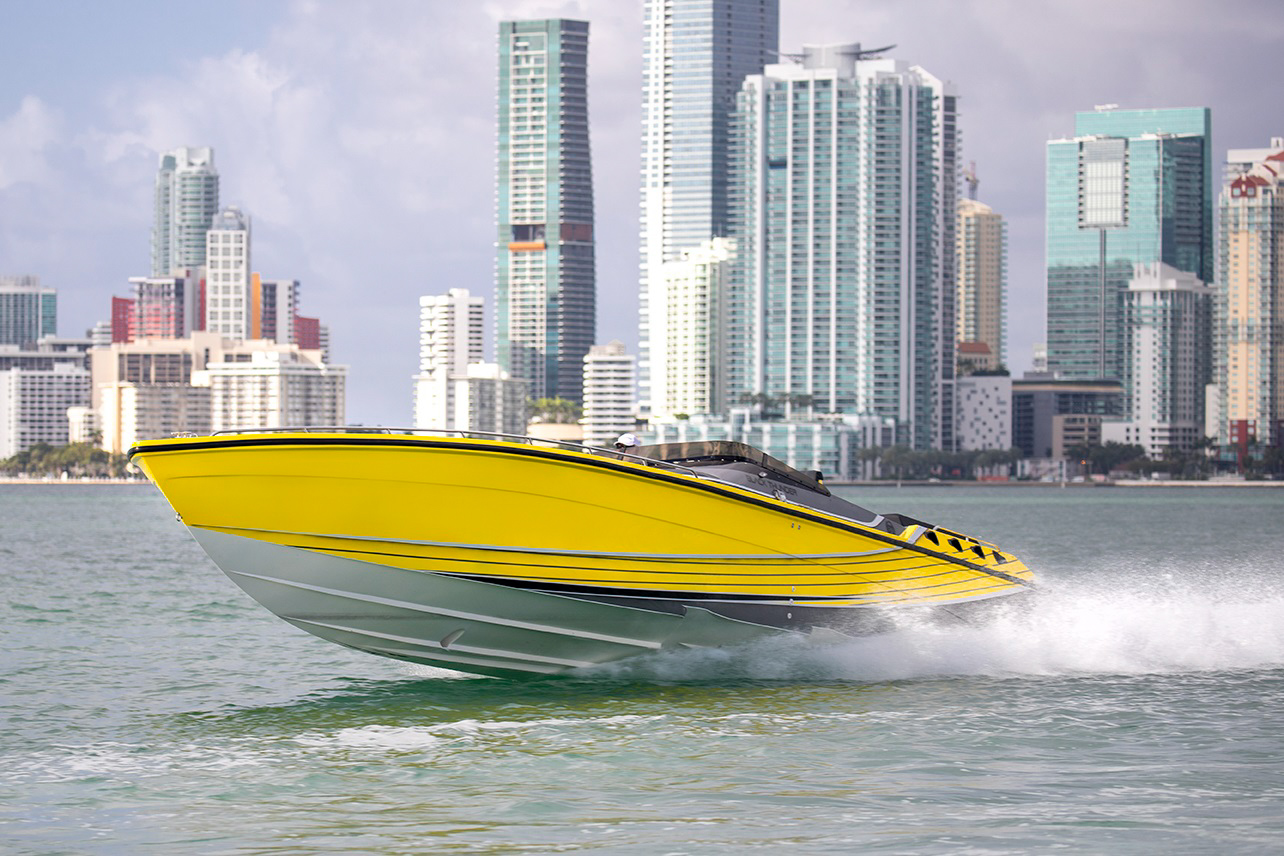 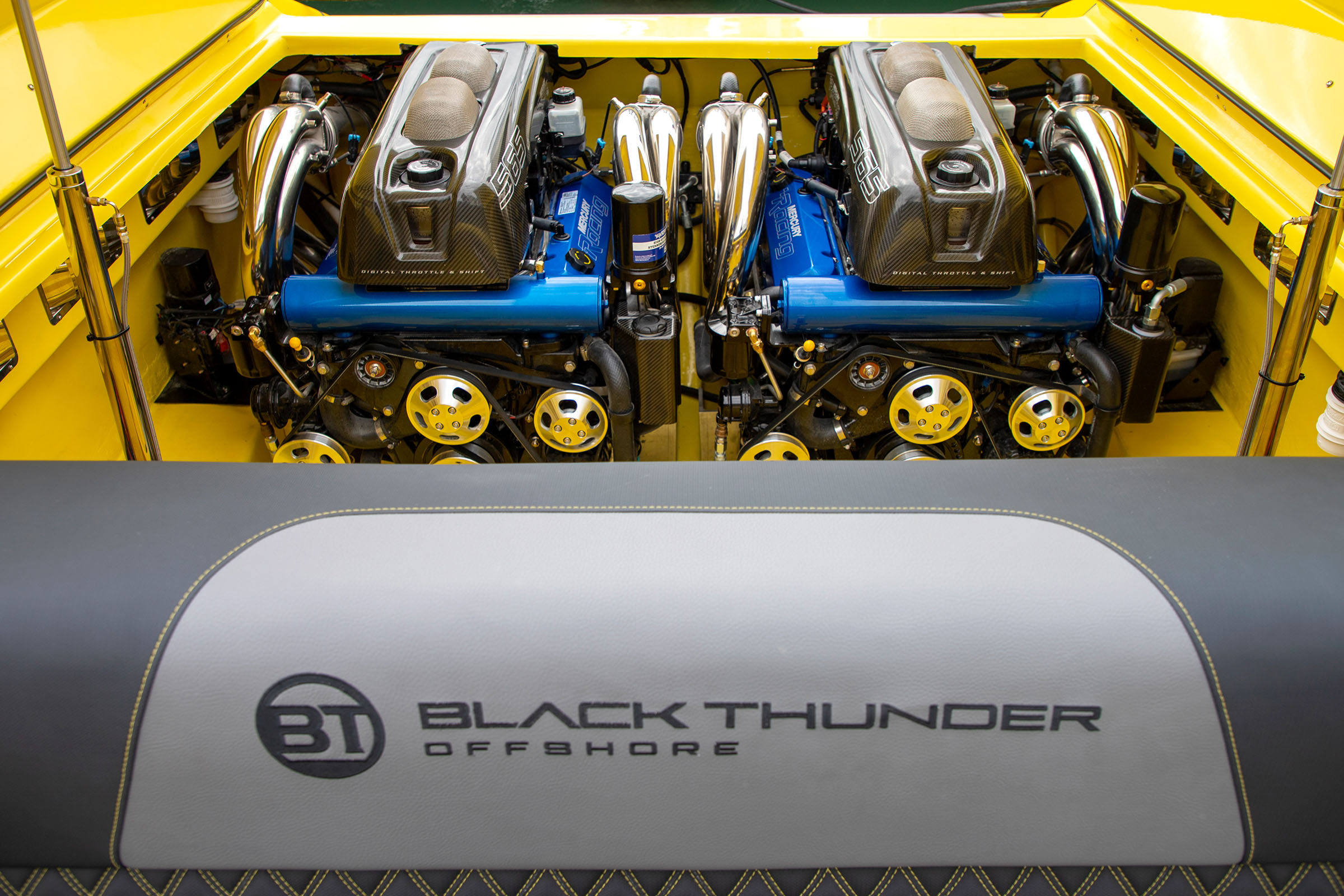 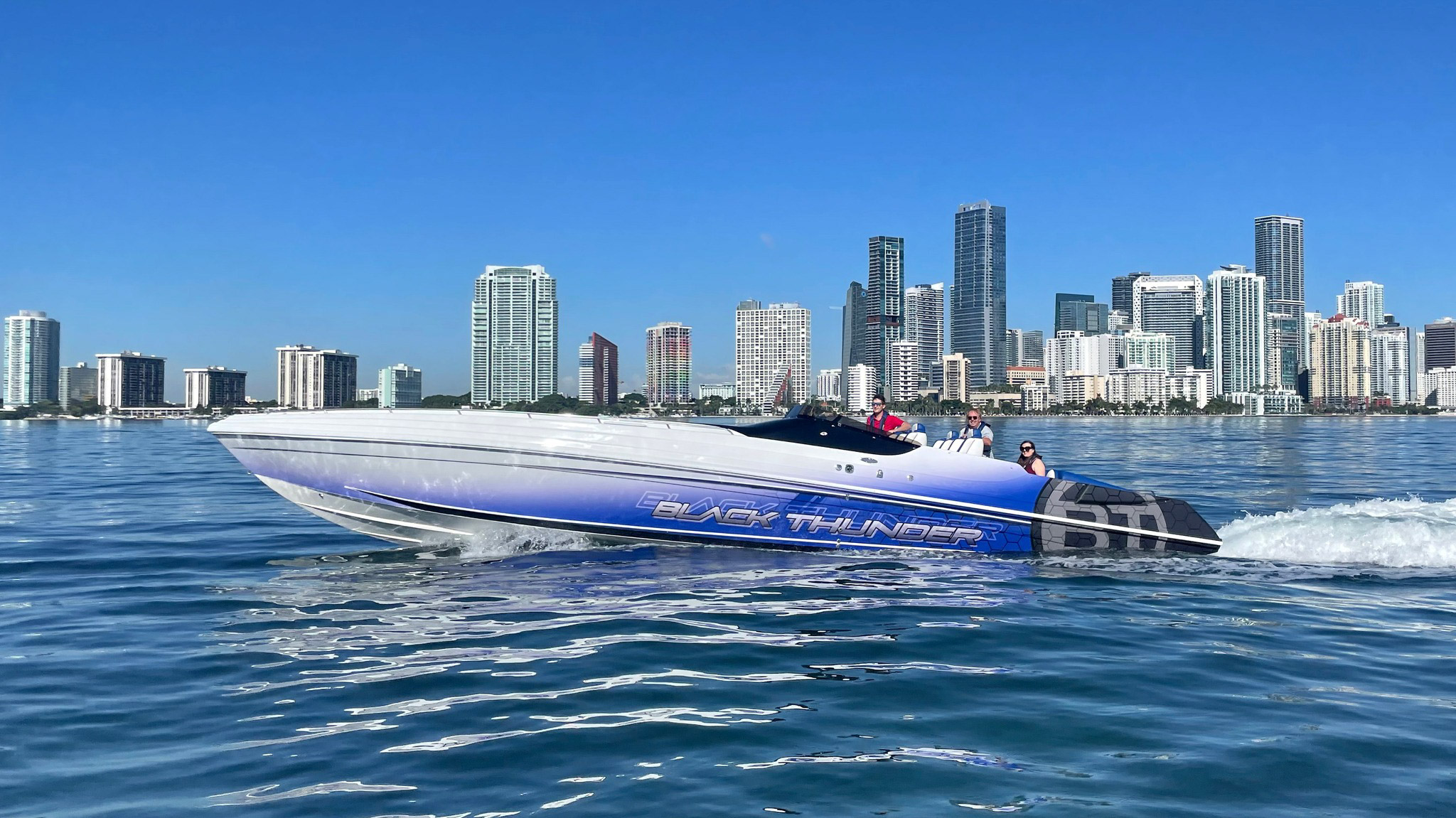 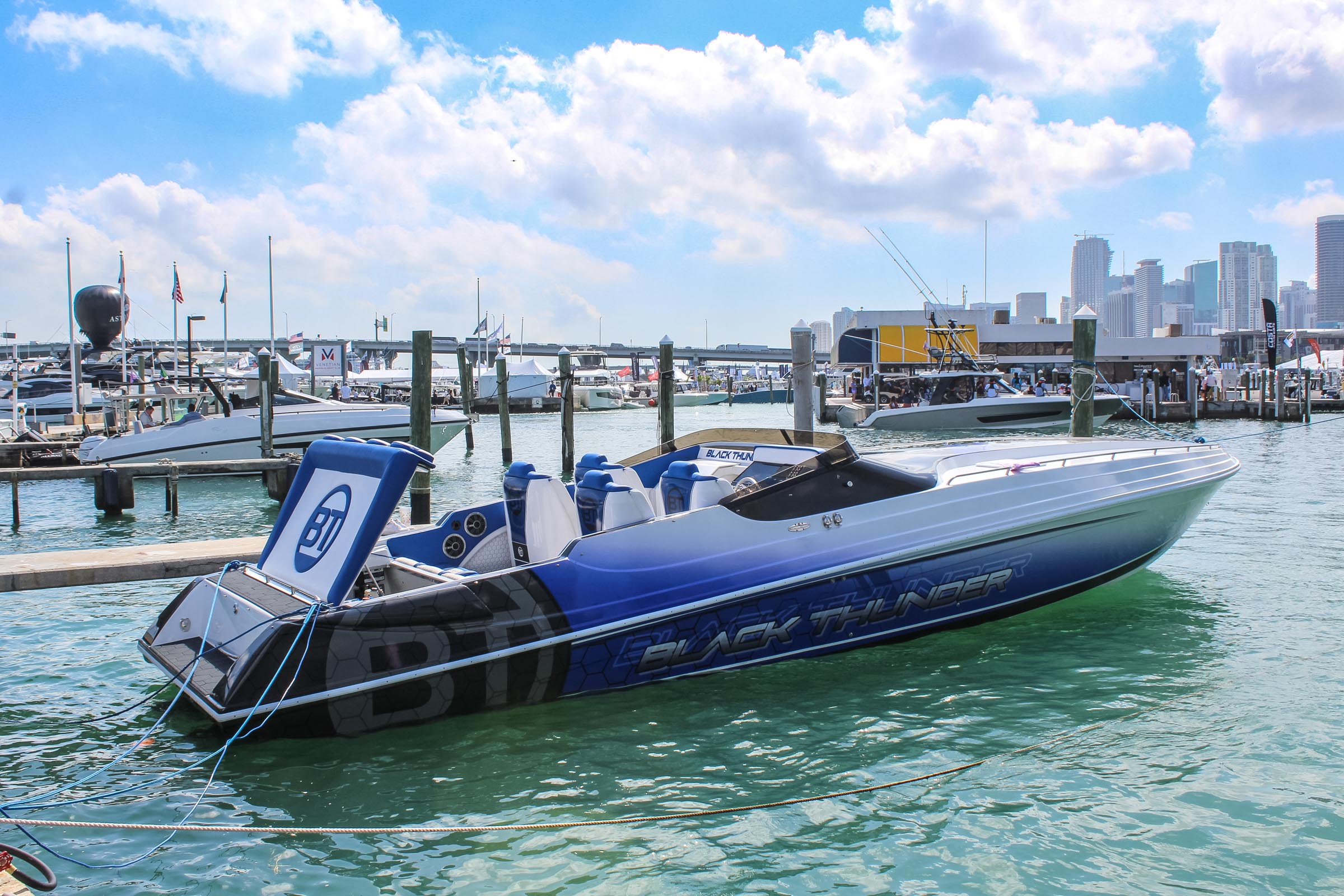 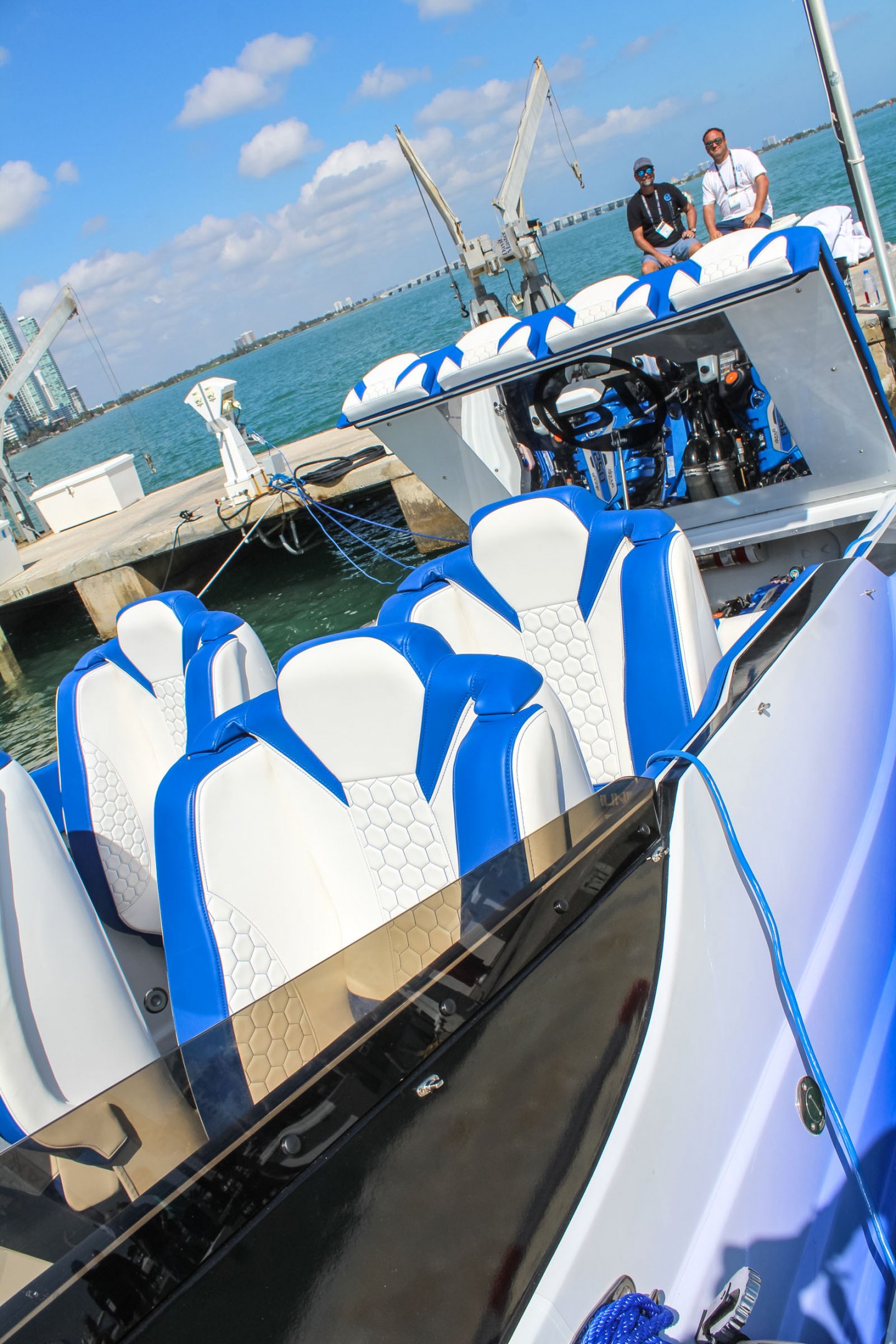 Founded in 1987 by Don Jenkins, Black Thunder Powerboat's motto has always been: Built to last and built to go fast. And while the 88-year-old V-bottom visionary has since retired... the "the end game remains the same" thanks to the leadership and innovative initiative of Tim Doran, the gentleman who recently took possession of the Hannibal, Missouri-based company.

Helping Doran uphold the industry favorite's winning luxury-slash-performance heritage is Don's son, Bob Jenkins. Bob remained on as operations manager and oversees new-model development, manufacturing and quality control. Together, he, Doran and the team are committed to taking Black Thunder into the next era of excellence in powerboating.

Doran tells me, “I was always a speedboat fan who admired the history of Black Thunder – especially the quality of the brand and how it's like having two different boats. You can relax in the air-conditioned cabin, and then come up the steps for a go-fast run to hit up that next waterway restaurant. Years ago, I became friends with the owner Don, and when he announced his retirement, it just seemed like the perfect fit to buy it."

While purchasing the company was the perfect fit for the longtime commercial construction developer, the brand's fresh take on "fitting the boats to perfection" is what's making headlines. To start, the premiere wave-crushing twin step 46-footer has been reconstructed with lighter-weight materials and larger horsepower packages. And take for example, the redesigned bow entry and extended aft platform that works to reduce exhaust sounds filtering into the cabin.

But returning to the crown jewels on display in Miami – all eyes were fixed on the new batch of 43-foot beauties. If the sleek and sexy Flat Deck and Raised Deck duo looked familiar, both were splashed for sea trials back in November and were maybe spotted strutting their stuff down to Key West with the Florida Power Club entourage, before heading back to Missouri for finishing touches. Could there be a better sea trial than the MacDaddy of FPC fun runs?

43 Flat Deck (Extended Engine Compartment)​
The rumbling twin Mercury Racing 565s had me at hello, luring me over to the enticing yellow monster in slip 514. I was not the only fan. A steady stream of stern-drive starved admirers gathered around, including my California buddy and fellow RDP'er Erick Bryner. Helping out at the show and working his photo magic with Black Thunder, Bryner raised my excitement level even higher informing me that the 43' Raised Deck model was also waiting for my gushing over in slip 108 down the opposite end of the marina; however, the Flat Deck is WHERE IT ALL BEGAN so first things first!

Grabbing your attention from behind with a back-end sexier than a stripper, the massive extended engine compartment charms with available power options ranging upwards to Mercury Racing 1350s. Rigged for wave-smashing offshore duty, with the twin 565s engaged, the twin-step hull's top speed stands at 80 mph and leisure cruising hovers around the 55-mph mark.

Moving forward, the SeaDek-covered cockpit seats six, and features a starboard side helm station stocked with state-of-the-art electronic, navigation and entertainment system components. Down the steps, the posh cabin sleeps 2 to 4 persons and includes marine A/C and heating, a private head and shower, and a mini galley complete with sink, refrigerator and microwave.

Custom painted to the owner's desire, styled with stellar stitching details and color-matched upholstery themes, bold new graphics and BT badging throughout, the 43' Flat Deck bank bruising of $700,000, looks and feels like a great deal. Kicking out 1,130 horsepower – it sounds great too! 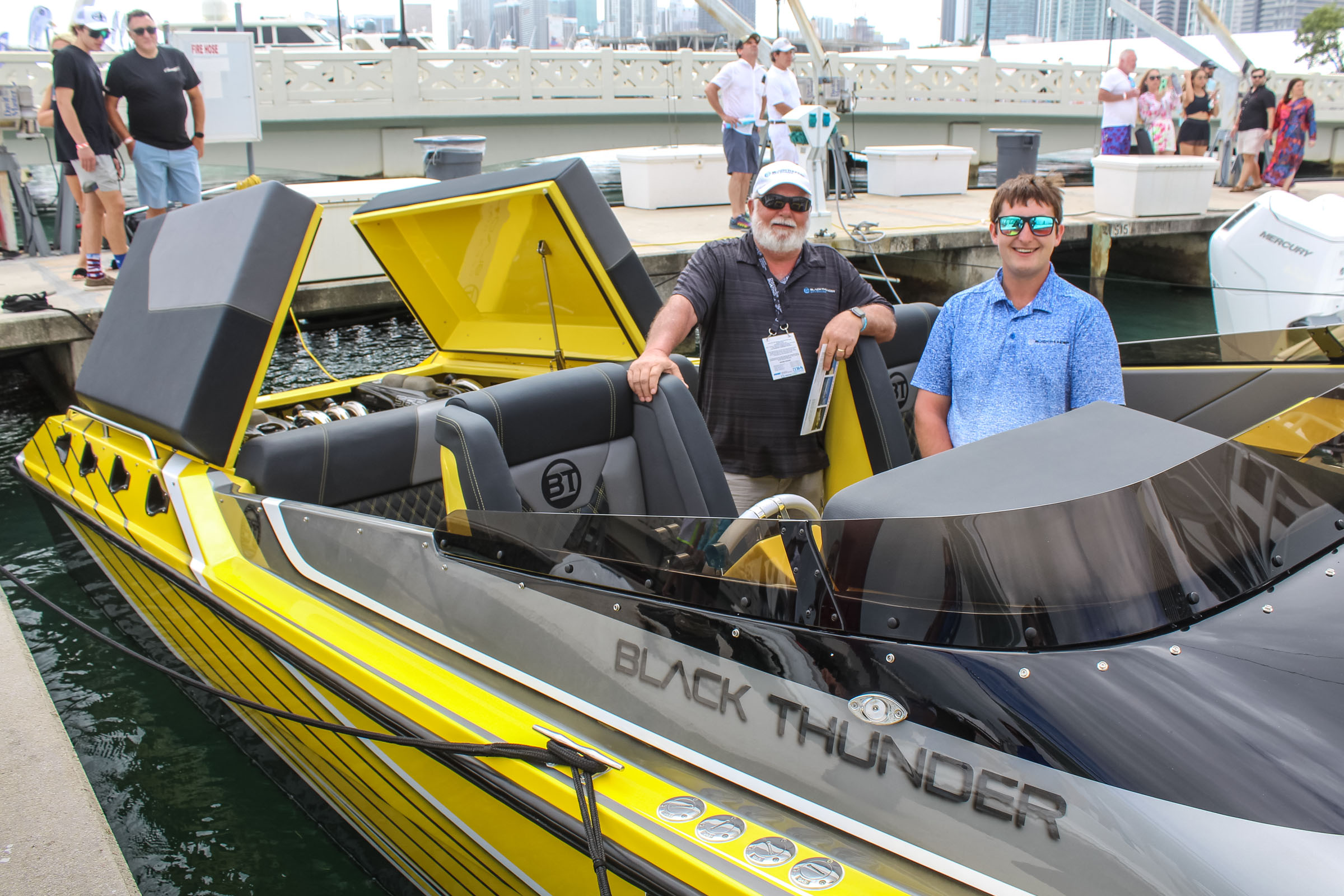 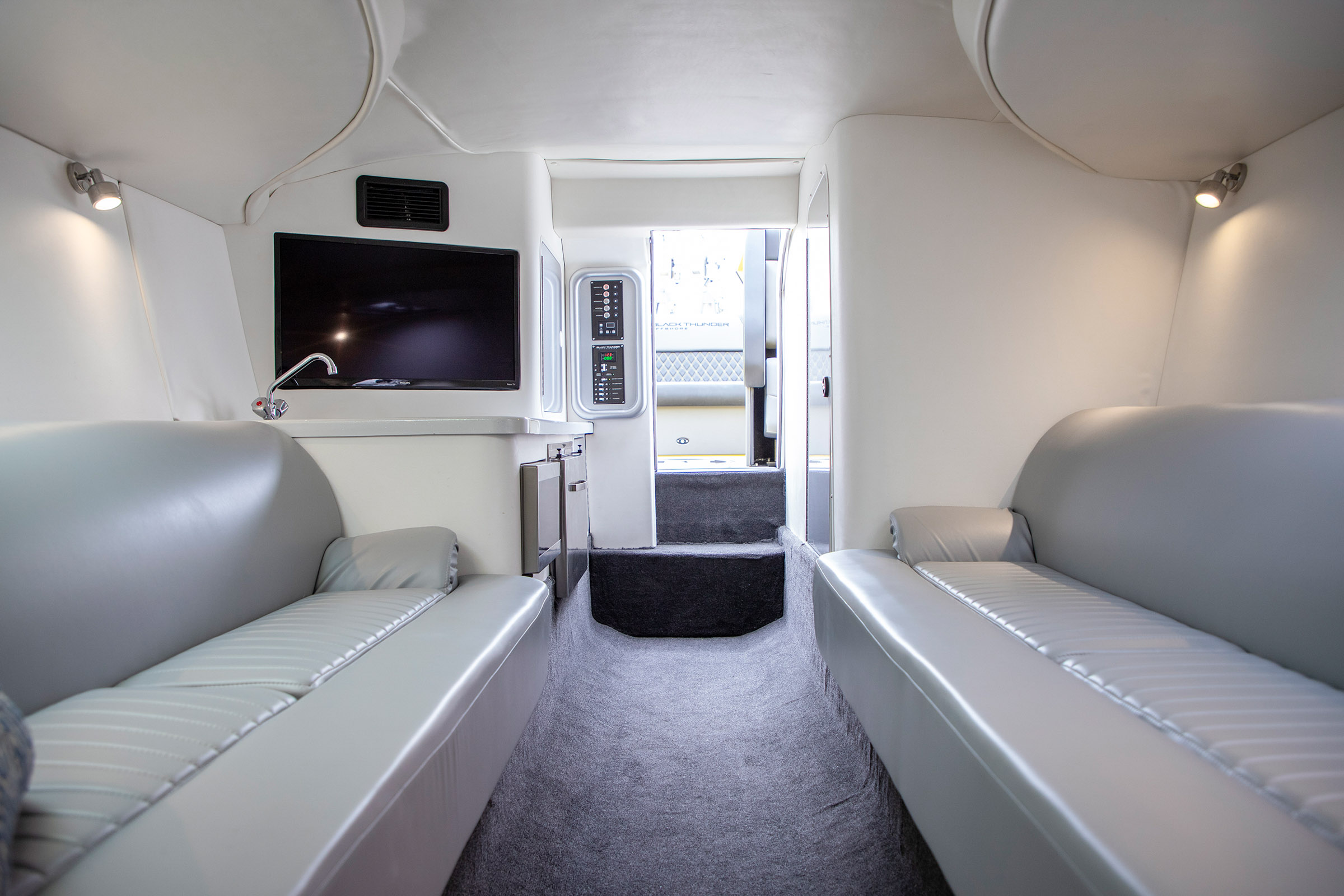 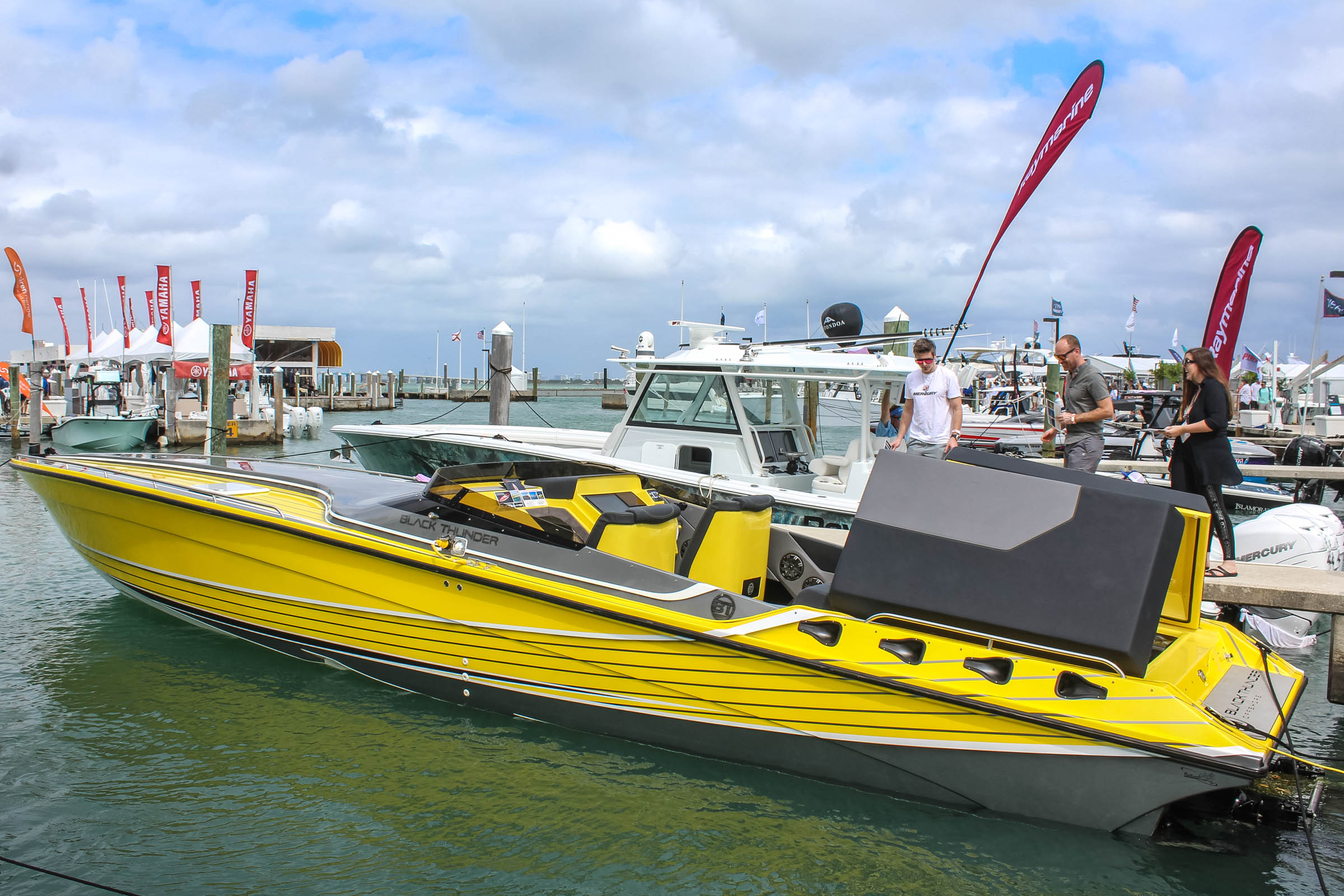 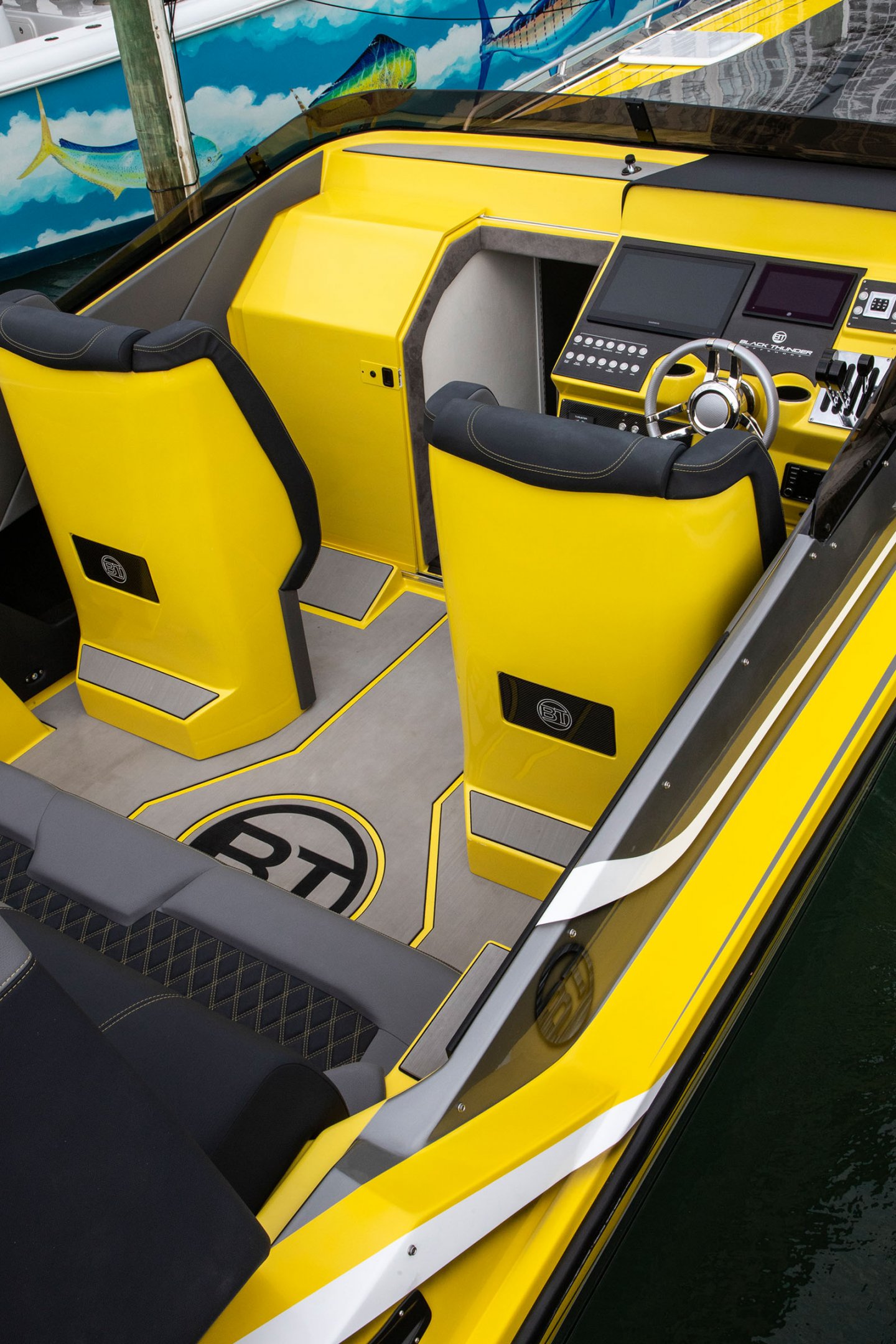 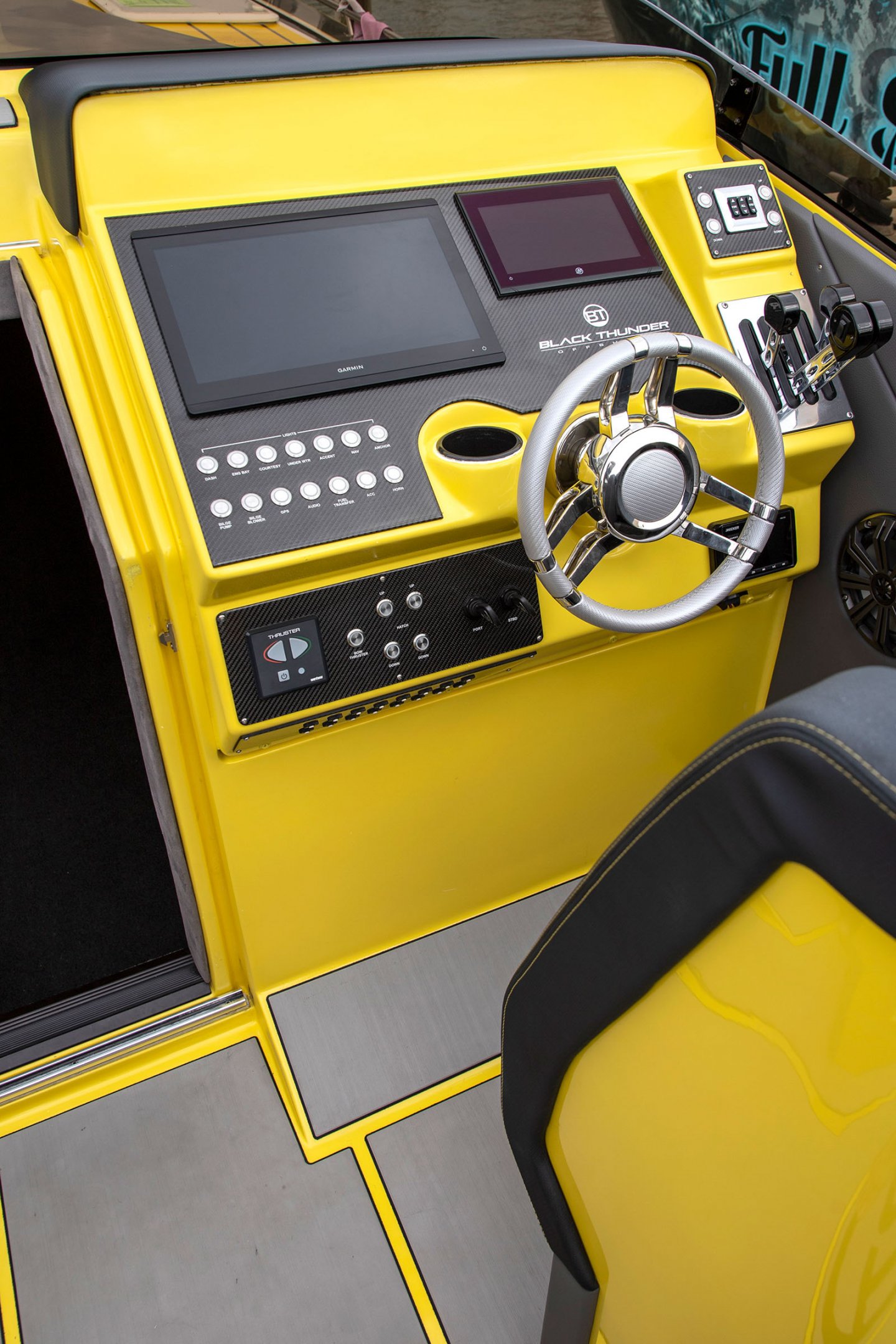 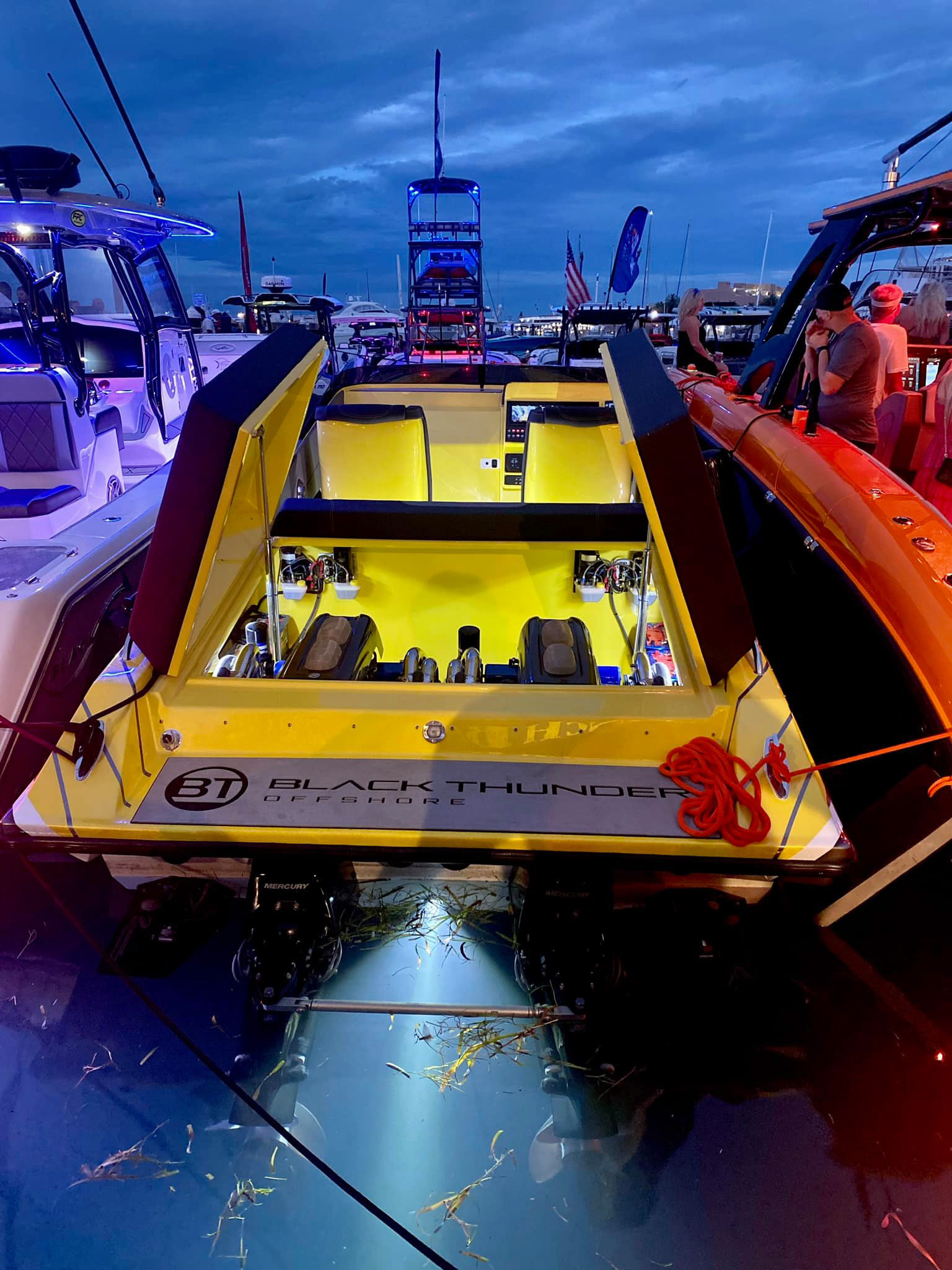 43 Raised Deck (Extended Cockpit)​
Successor to the original 43, the Raised Deck edition scores a series of home runs right off the bat. The extended row of drop-down cockpit bolsters answers the call for those wanting a great family powerboat (no that's not an oxymoron) or space to place a raging party of eight. The second big win will get the biggest grin from those towering over us little guys and girls. Check it out: The entire length of the cabin offers six feet, ten inches of head room, thus even the tallest of your tribe can enjoy "headache free" time belowdecks. And no matter your height, you will be hanging out down there; the cabin is out of this world and could pass for a suite at Caesars!

Because of its lower level lushness and relaxing vibe, overnighting on the 43 Raised Deck is as pleasurable as day-tripping or afternooning aboard. There's a 32" flat screen TV and Blueave Marine Audio system to provide the background beats; comfy couches comparable to your living room set-up; a cozy and very private sleeping-berth with a queen-size bed closed off with classy gray and white curtains; and LEDs for adding ambiance all around. What's more, all aforementioned creature comforts found on the 43 Flat Deck are also incorporated into this model.

Hammer time happens by way of twin Merc 520s and Bravo One XR drives pushing the 12,000 pounder to 73 mph with throttles pegged; backing off brings the boat to a more economical cruising speed in the mid 50s. Known for catering to customers' specific requests; if the future captain writing the $650,000 check craves bigger powerplants, configuring a standard cockpit remains an alternative, as does opting for a straight bottom hull if seeking a more stable ride, opposed to the twin step noted for harder high performance action.

No matter your rigging requisites, Black Thunder is sure to satisfy, providing the go-fast wonder at the top of your wish list. In true Miami fashion always exerting its international flair, interest was generated from around the globe, as far off as Tahiti, to the Dominican Republic and Canada. Enthusiasm among show attendees was also strong nationally, thus it's anyone's guess what waters will first welcome the Black Thunder powerhouses. Keep your eyes and ears open! 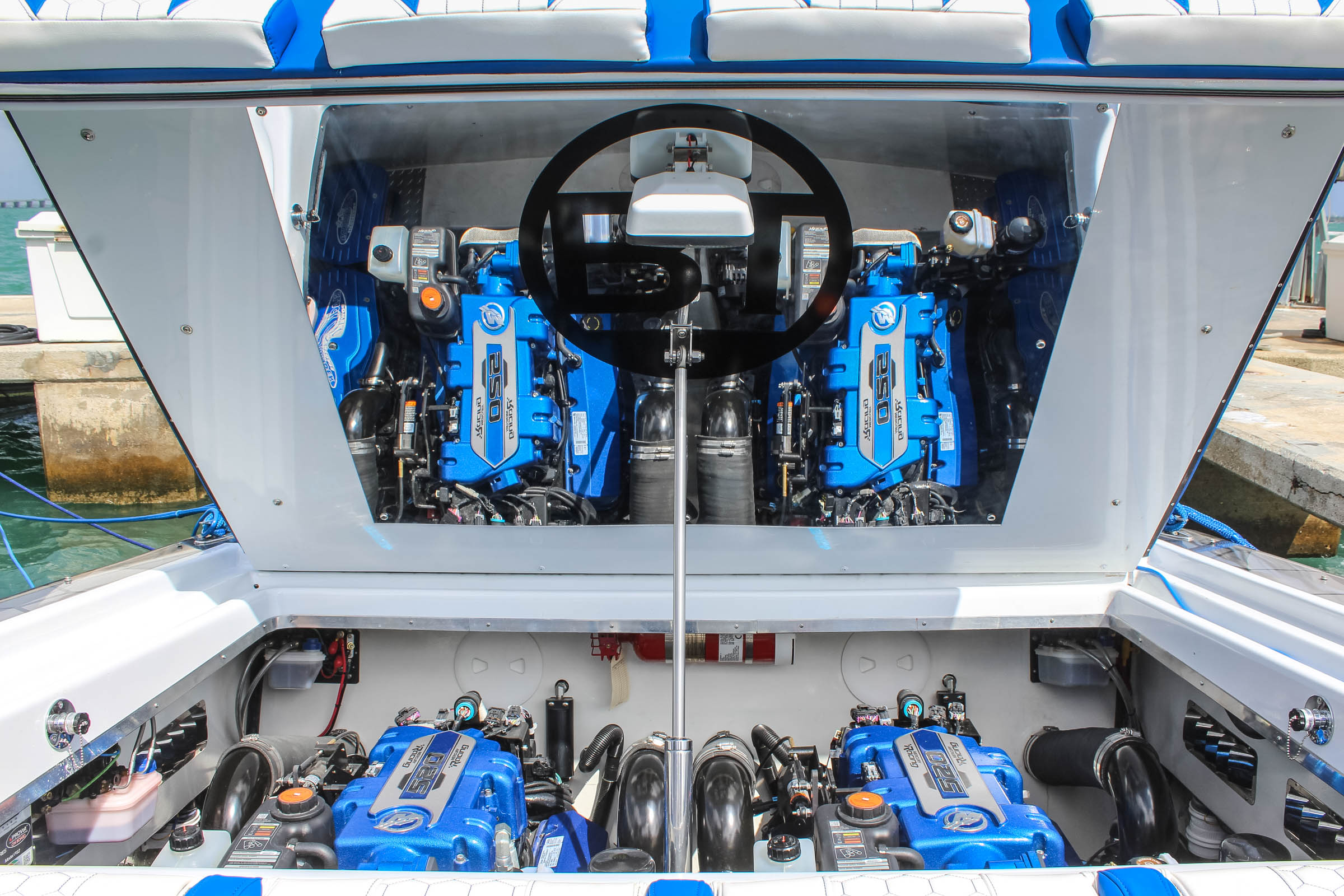 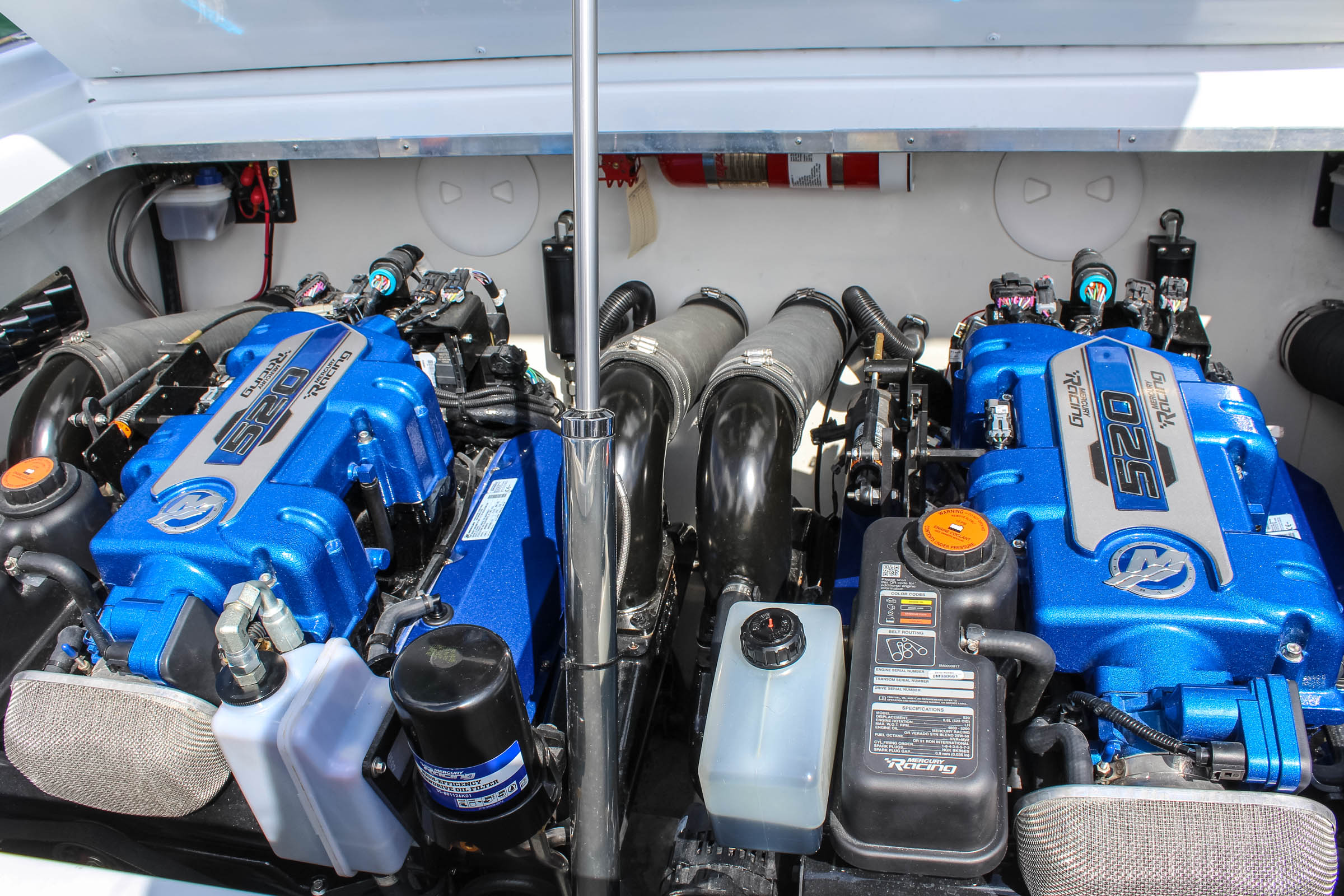 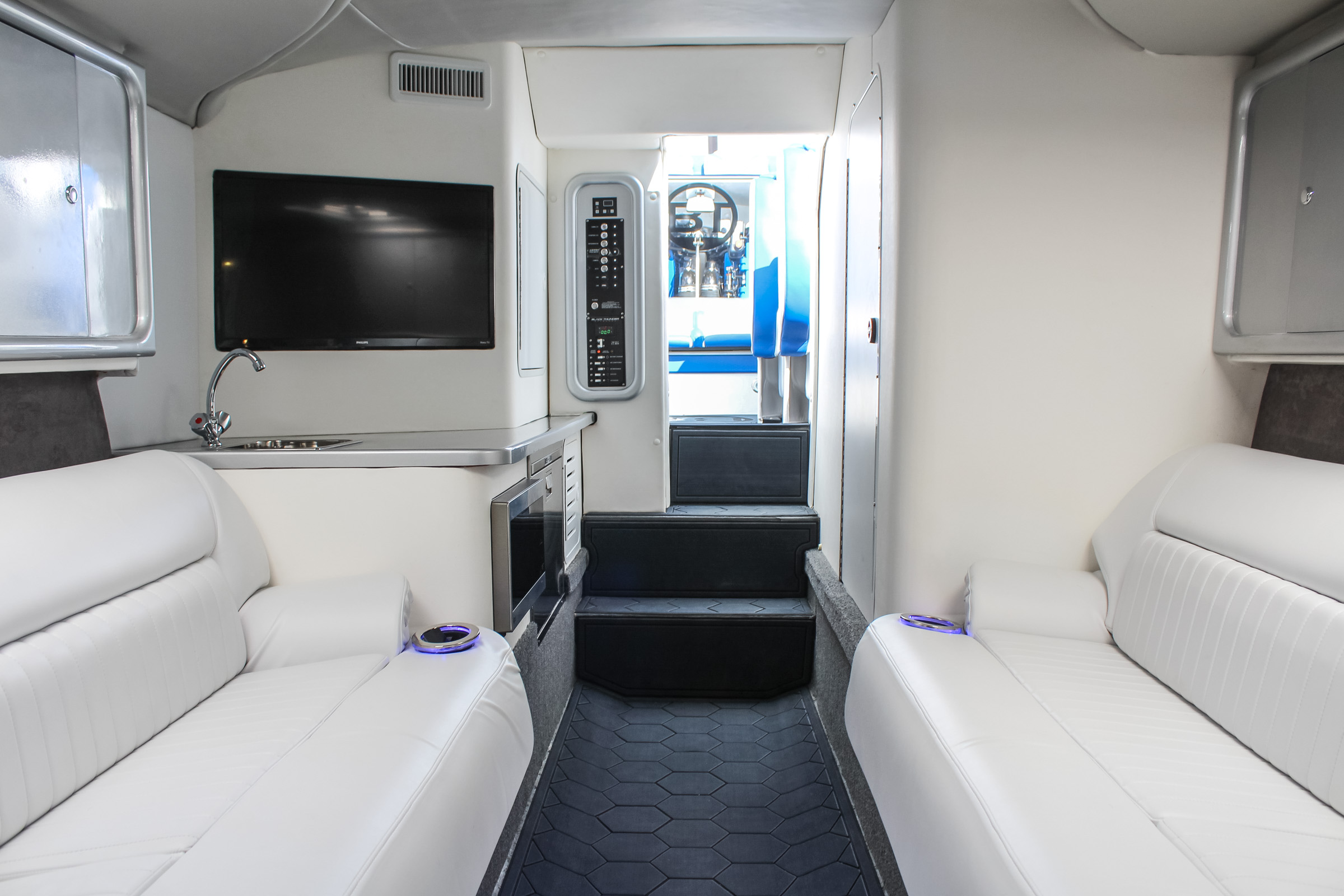 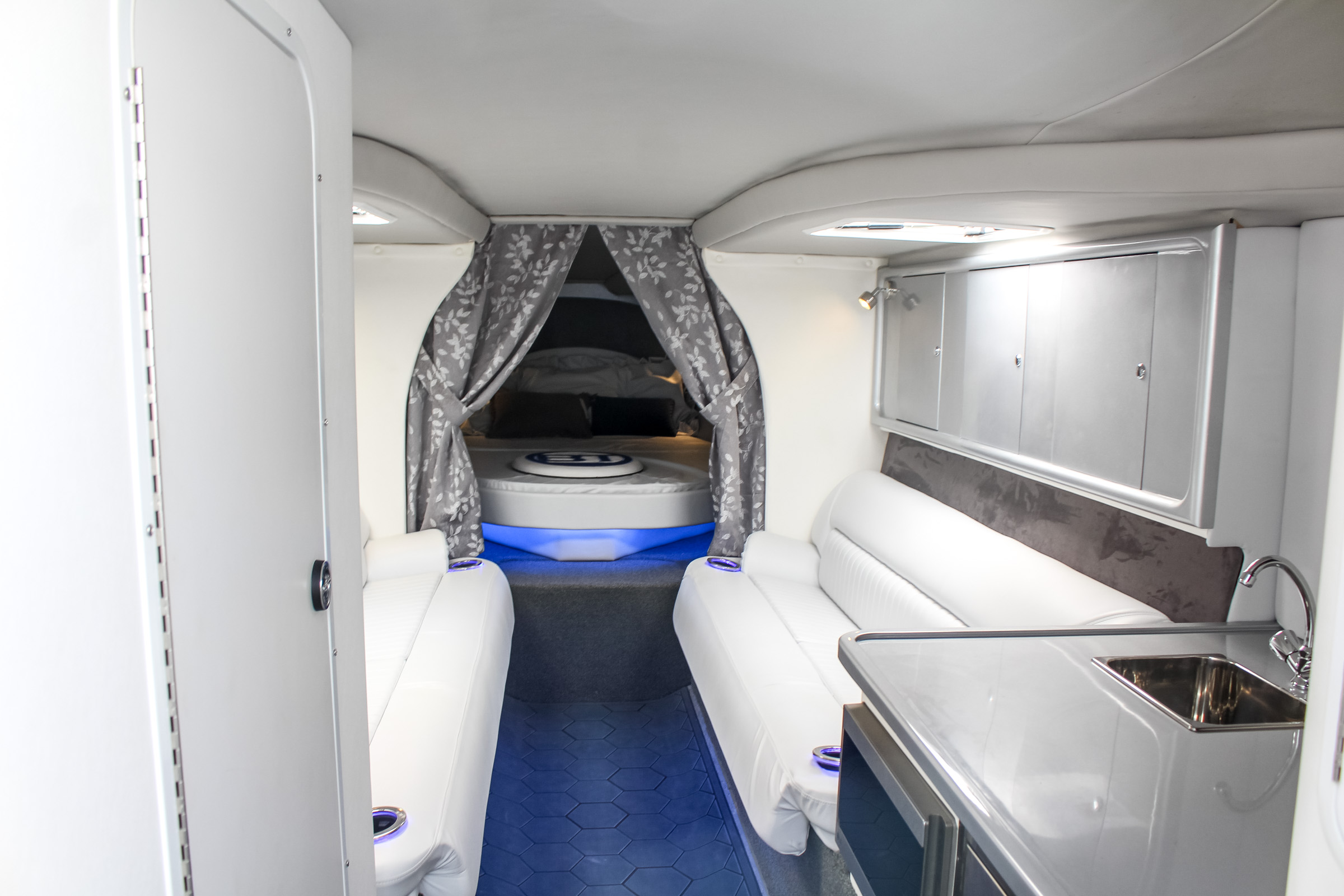 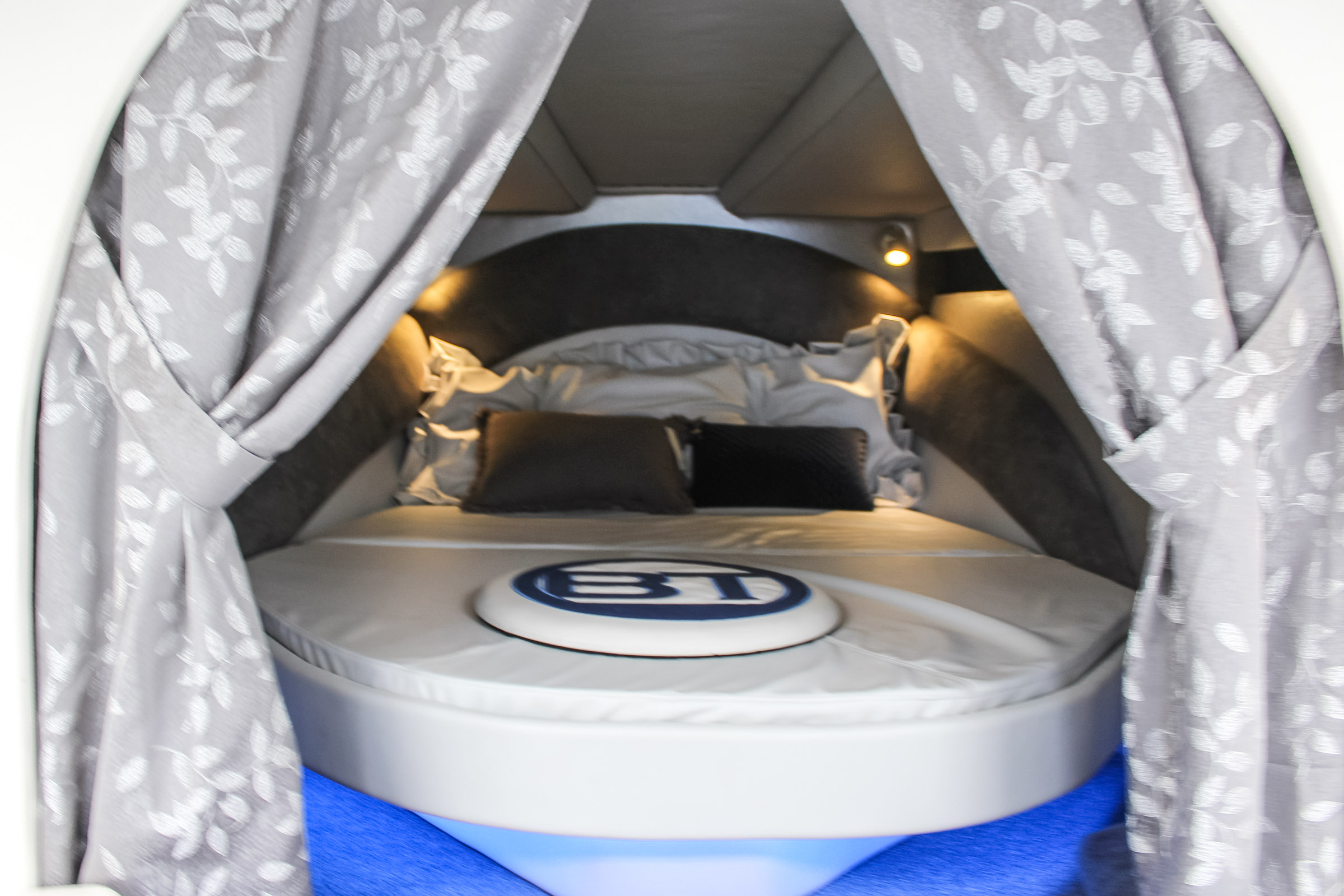 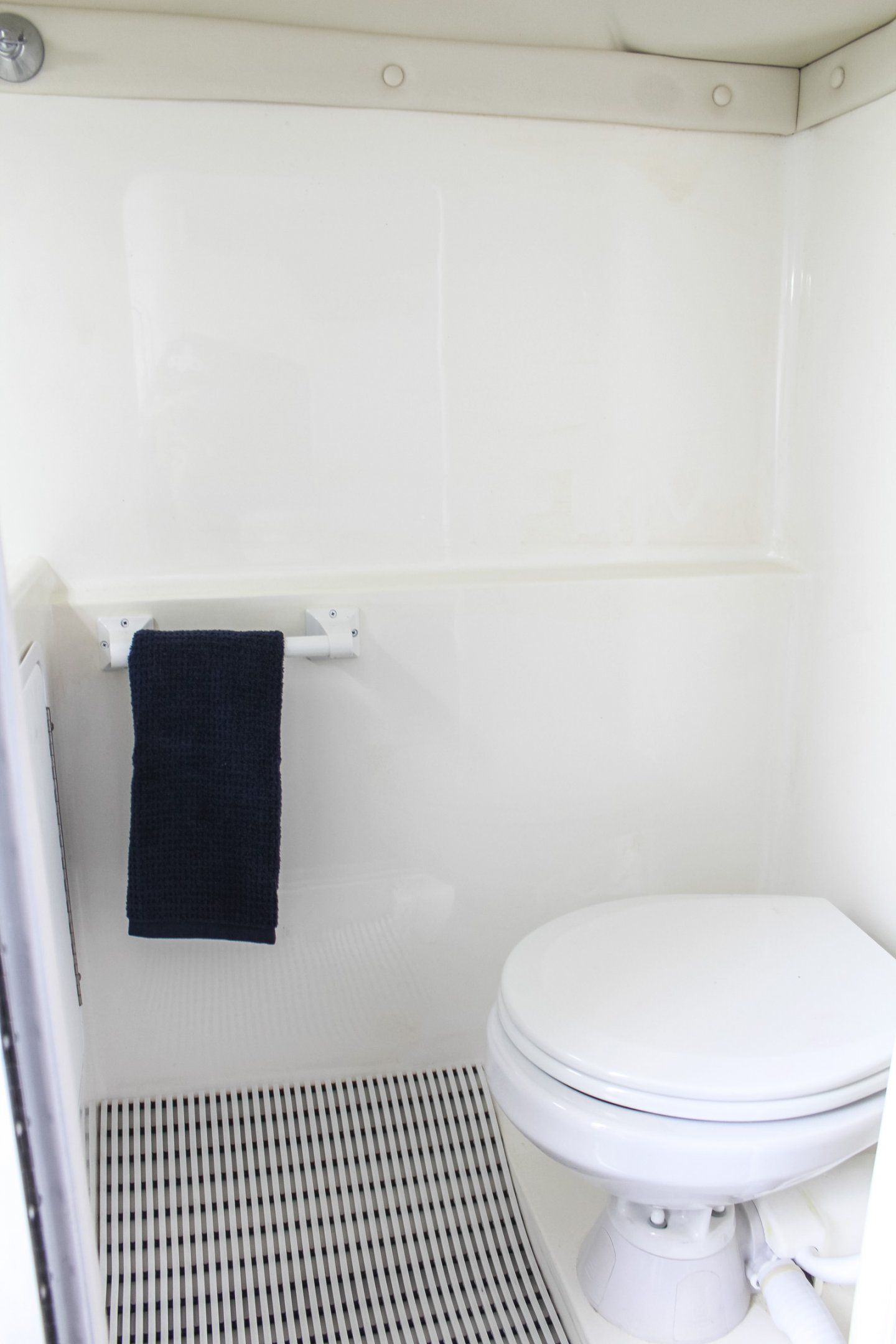 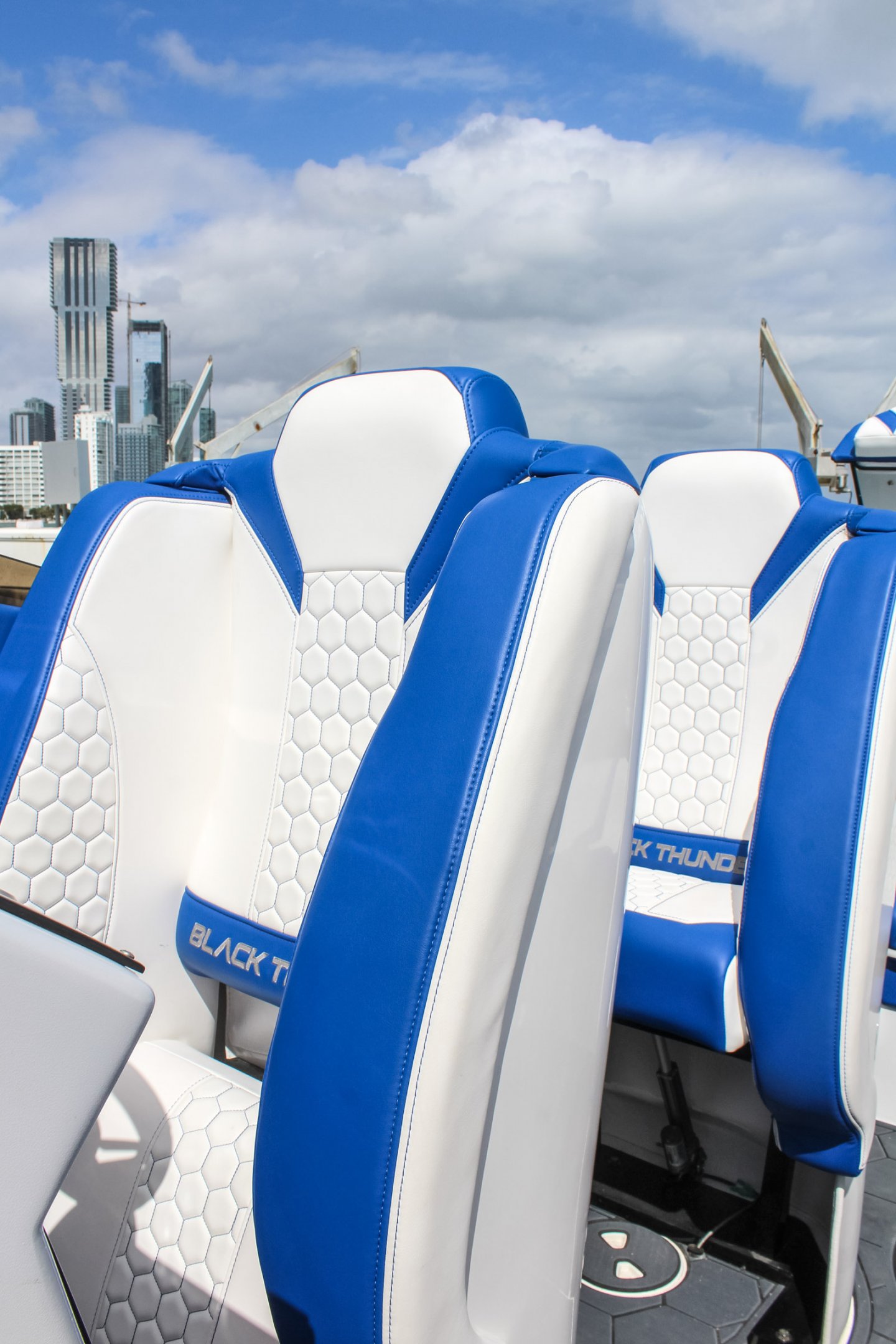 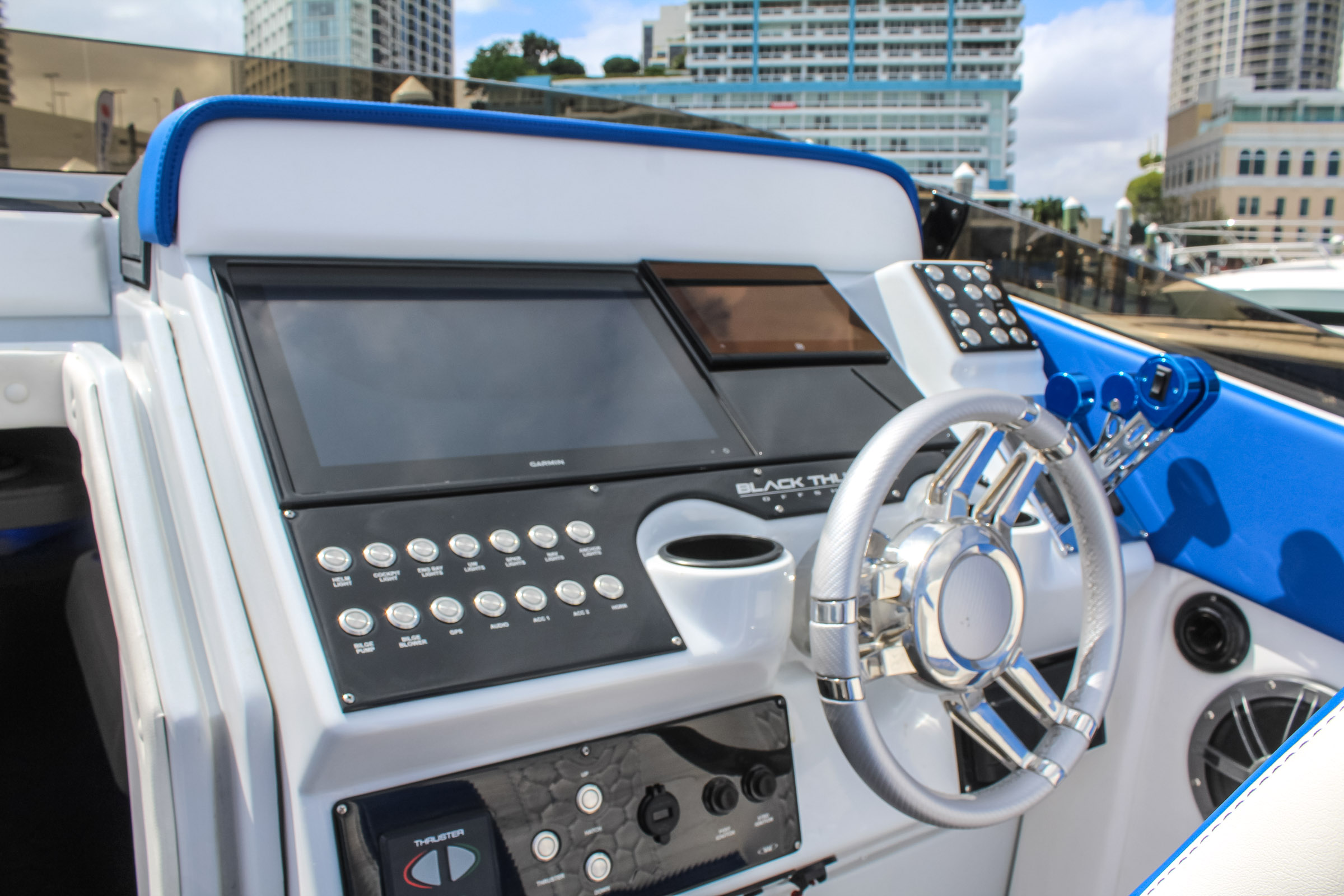