By and large, just the notion of Nor-Tech and the Bahia Mar in the same sentence means one thing: It's October and drooling is underway on the HI high-performance dock at Fort Lauderdale's International Boat Show. But, not this time, nor that dock. It was even better. Nor-Tech didn't have to steal the show with its customary multi-pack of prized possessions... it was the show — hosting a demo day series of sea trials down on D dock where the Cape Coral, Florida-based company introduced a family of 34', 39' and 45' center consoles. 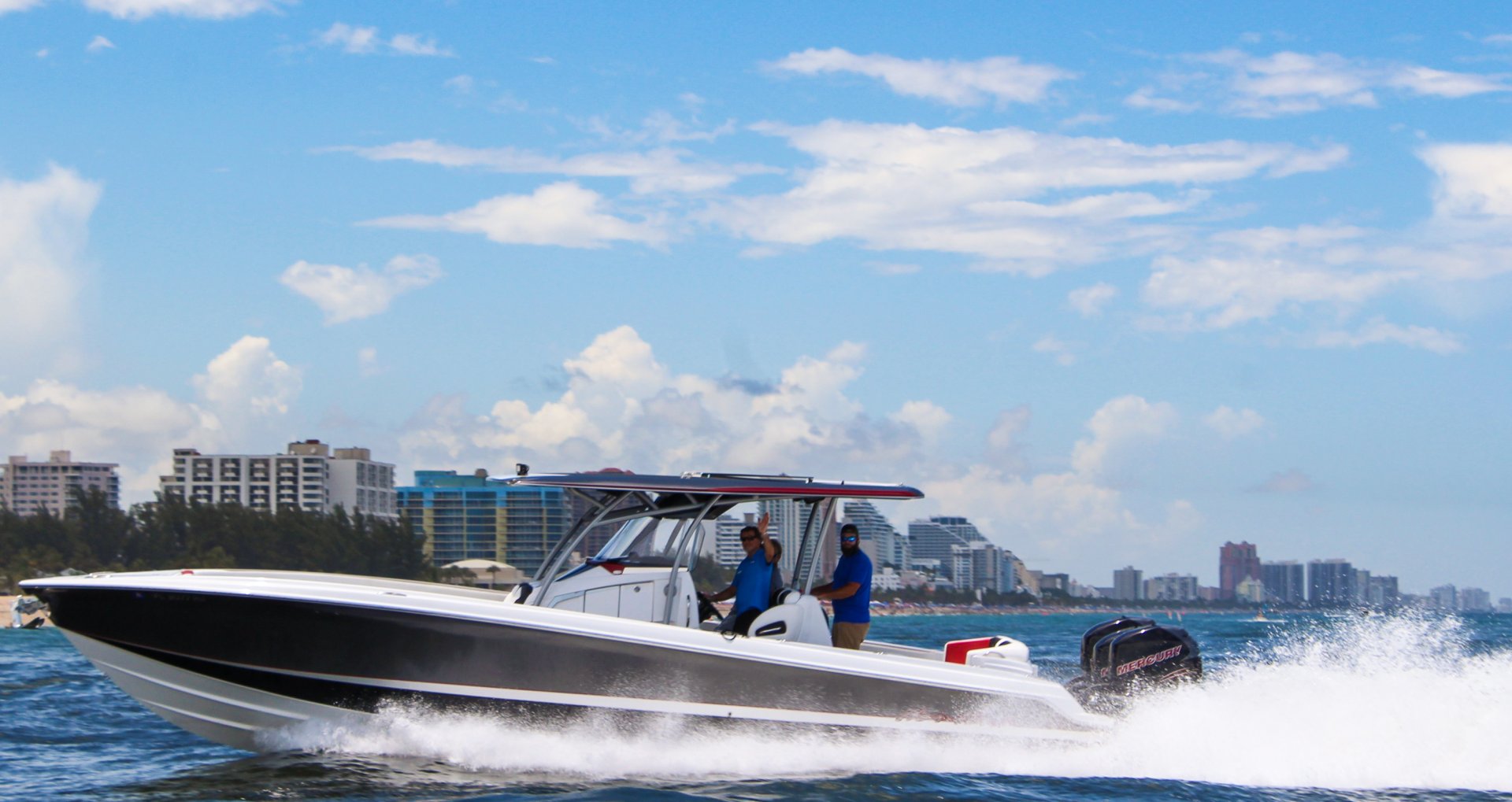 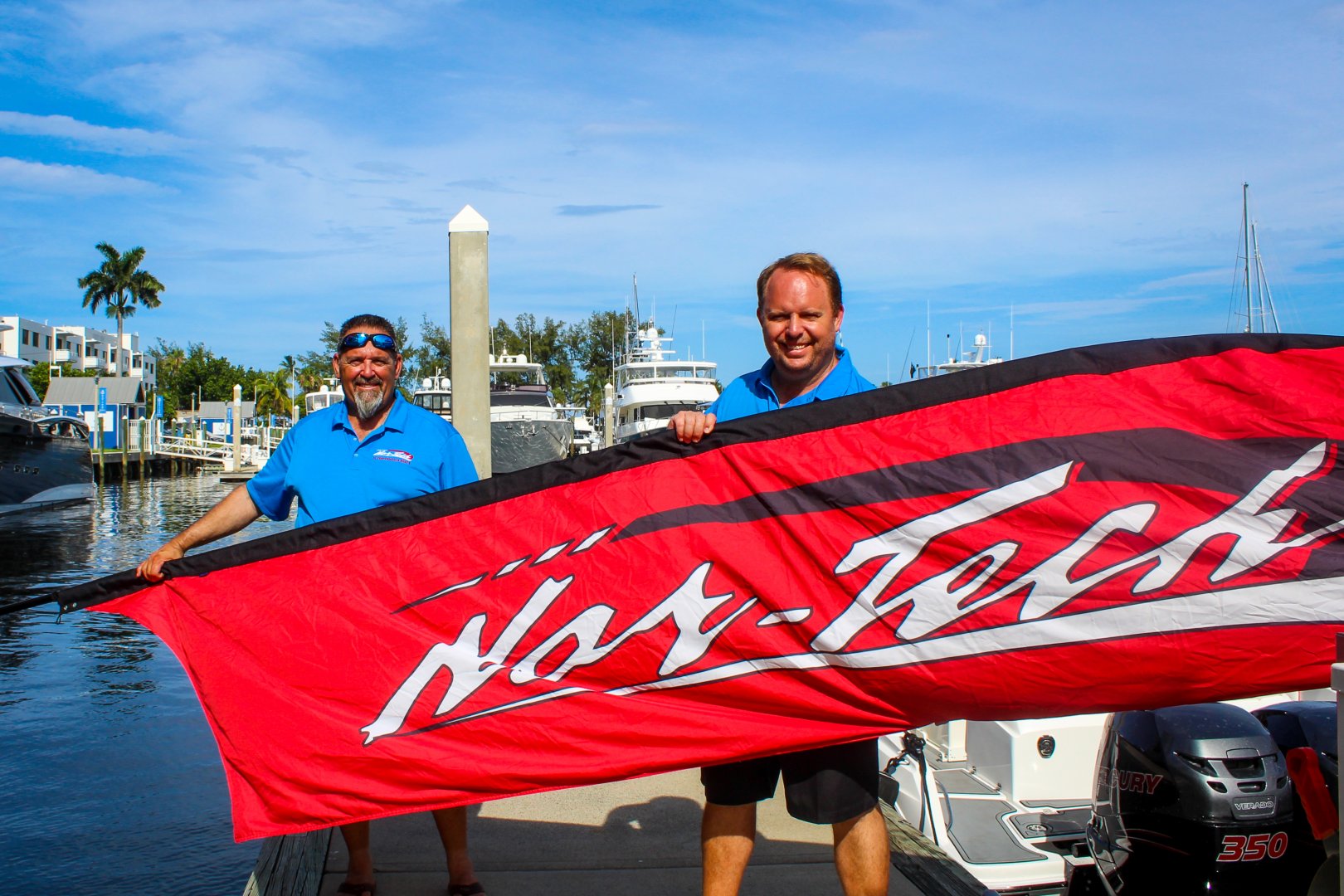 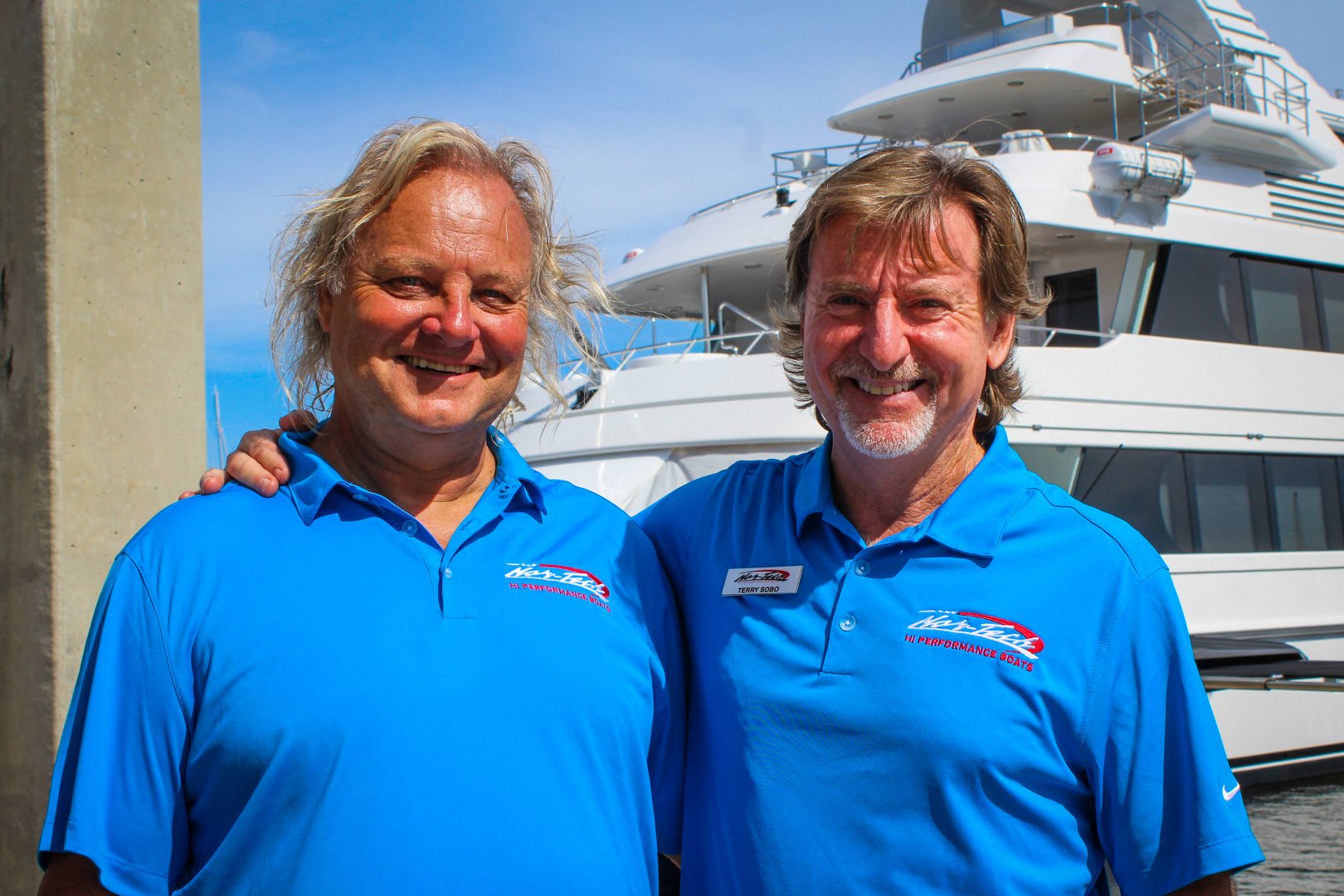 Nor-Tech co-owners Trond Schou and Nils Johnsen came up with the idea due to the upside-down nature of 2020 and continuing cancellations of boat shows and summer happenings thanks to the Chinese-crafted curse of COVID-1984. Throttles were tapped and the trio of outboards performed revolving bursts around the Atlantic giving the steady stream of seafarers the feel and zeal that handling a Nor-Tech delivers. The RSVP-only gathering of go-fasters then retreated to the indoor lounge overlooking the quay of quarantined superyachts stuck in South Florida, to mingle over a spread of food and spirits, and jingle around potential purchasing numbers. 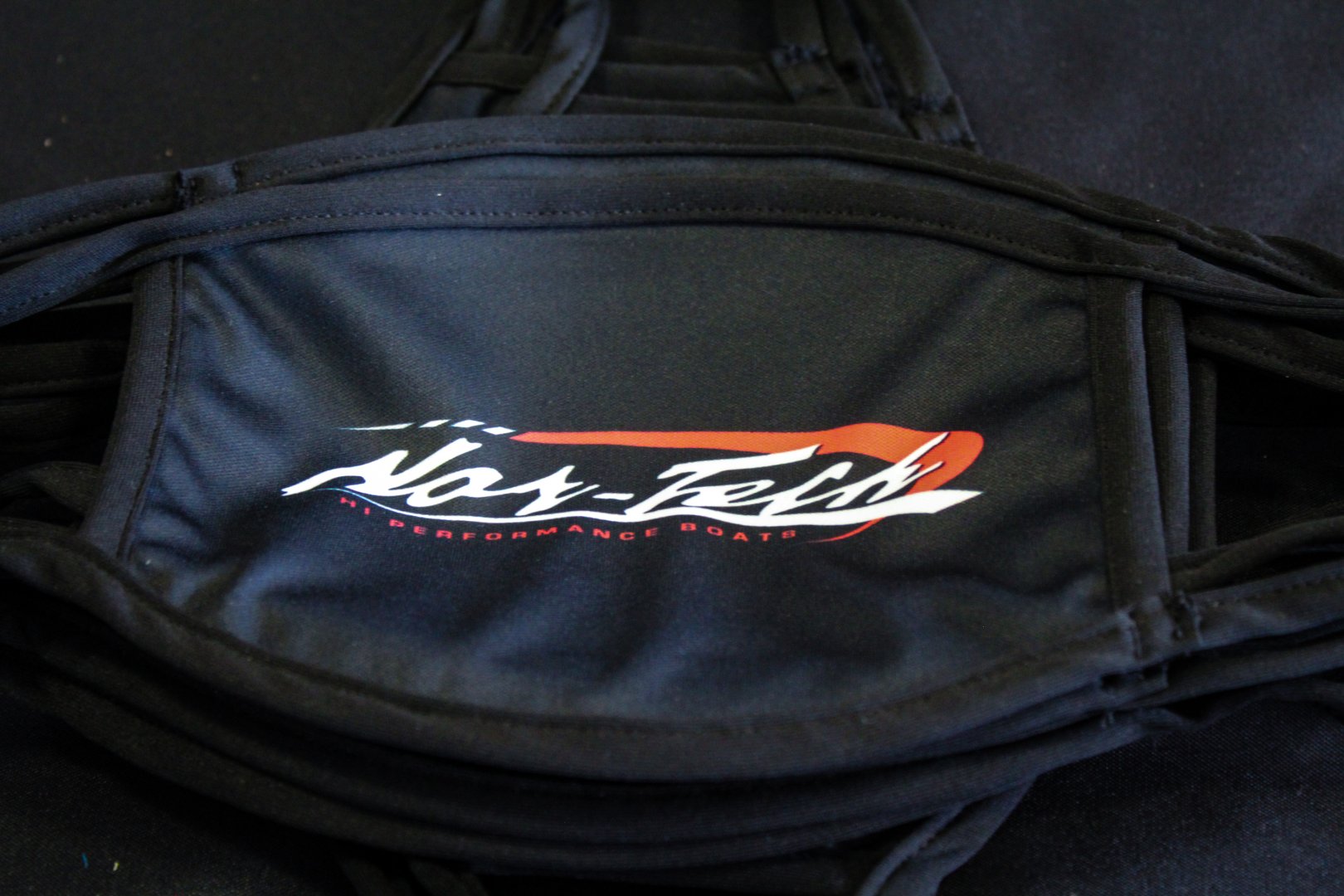 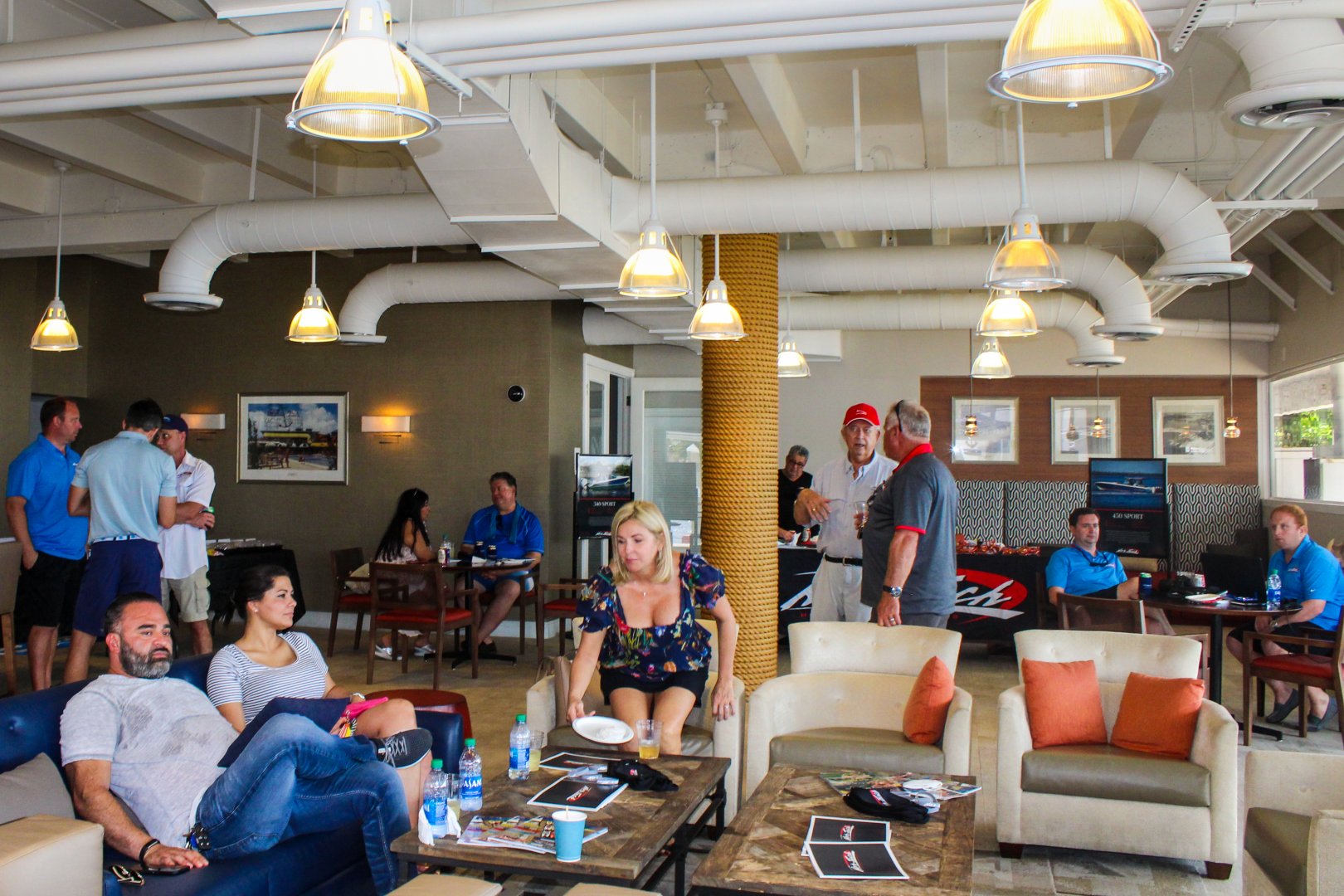 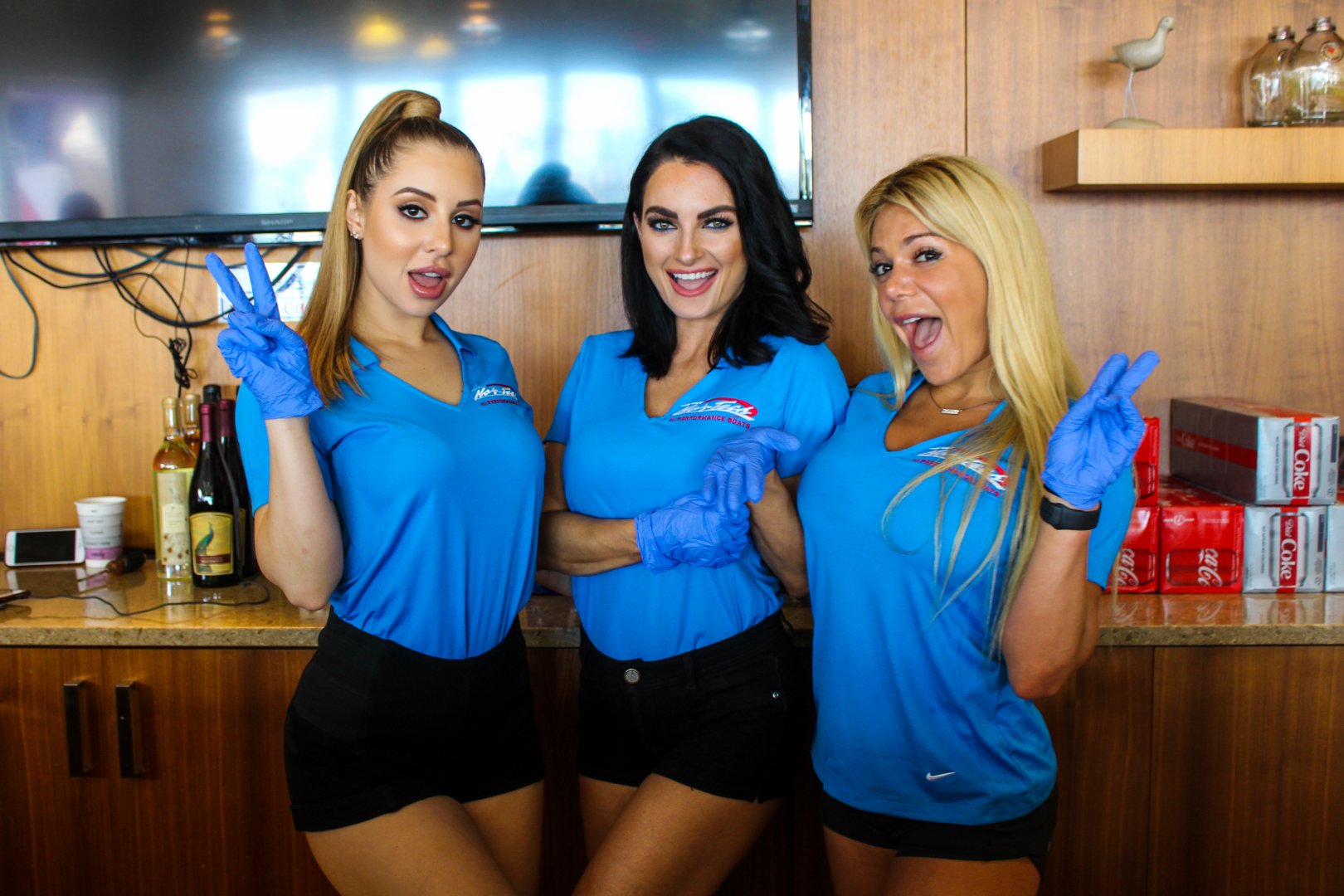 Following Nor-Tech's three decades of turning out the hottest V-bottom and catamaran hulls, it's safe to say attendees rolled in well versed and needed no schooling on the company's background. On the other hand, while the speedboat portfolio speaks for itself, the center console market is unchartered territory for members just now migrating over.

Many enthusiasts in the crossover community are not aware Schou and Johnsen originally branched out into the field with the 390 Sport back in 2010. Their hope was to keep the company afloat after the global financial crisis (GFC). The Norwegian marine masterminds had no idea the turn-key outboard would become the best-selling boat in the brand's history.

For anyone not familiar with the collection, RDP is about to shed some light on the line, beginning at the inner core... the area you can't see but certainly can sense. The secret weapon responsible for Nor-Techs' internal strength is thanks to a technique called hull blueprinting.

Hull blueprinting is best defined by modifying an object to bring its critical measurements back to (or close to) original factory specifications. As an end result, the procedure eliminates mold variances when finishing the bottom of a hull while keeping the dimensions true to the initial design. Generally this ritual is reserved for race boats, but Nor-Tech makes it happen on all boats. The process incorporates filling and coring the hull strakes to increase rigidity by strategically placing high-density foam and interlaced Kevlar and carbon fiber in the crucial areas, and encapsulating the composite stringer grid in fiberglass.

In terms of durability and excellence in craftsmanship, it's satisfying to know that behind the enchanting outer beauty, inside hides a structural beast. With that said, the only remaining quandary is having to decide which Nor-Tech model is right for you and yours; precisely why demo days serve as highly feasible fact-finding missions. This steamy Saturday in June on hand with Schou to spotlight the ins and outs of the 340 Sport, 390 Sport and 450 Sport were vice president of manufacturing Henrik Margård, dealer manager Geoff Tomlinson, longtime salesman Terry Sobo, and the personable Nor-Tech dealer Bob Crow and his staff from South Florida Performance Boats. 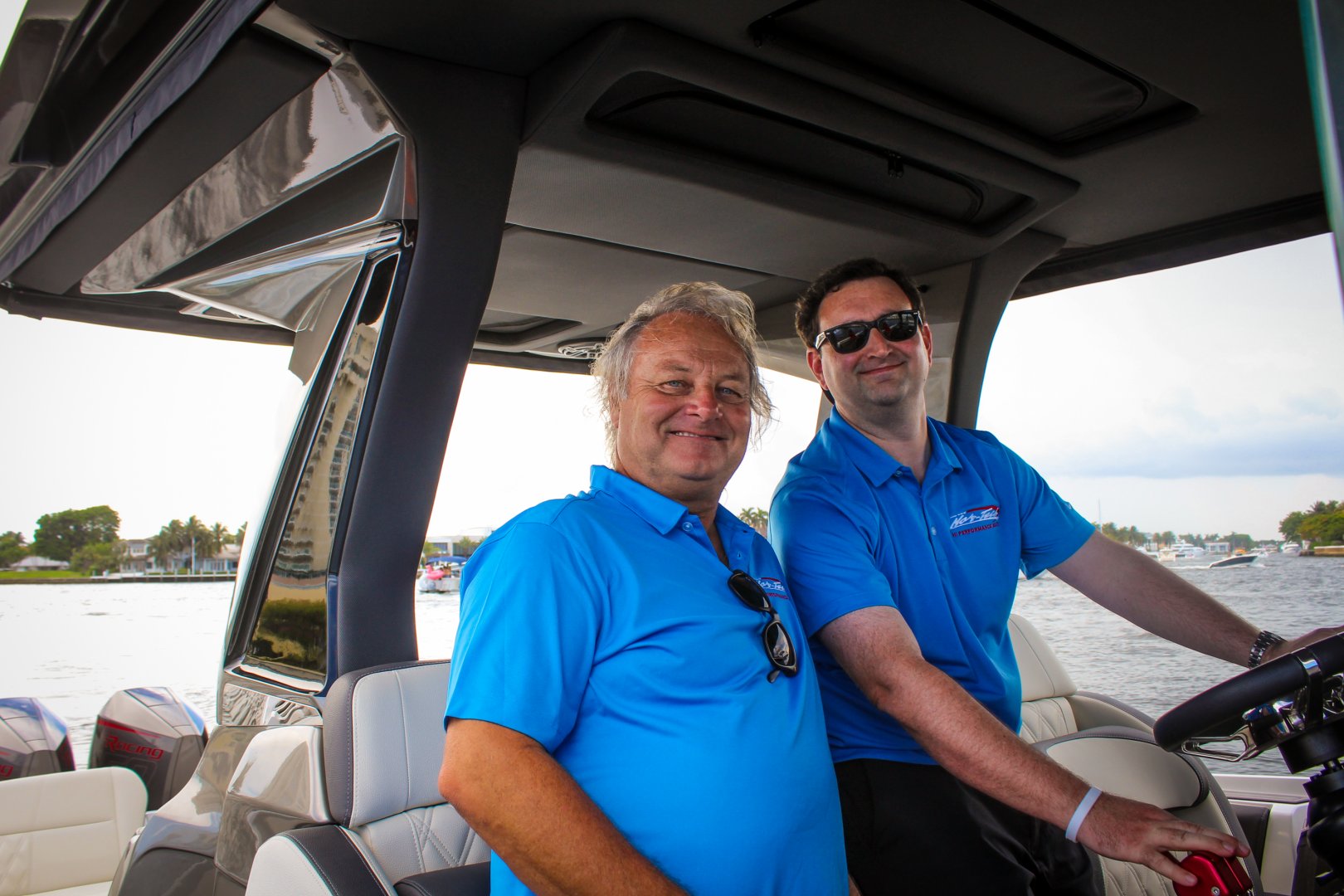 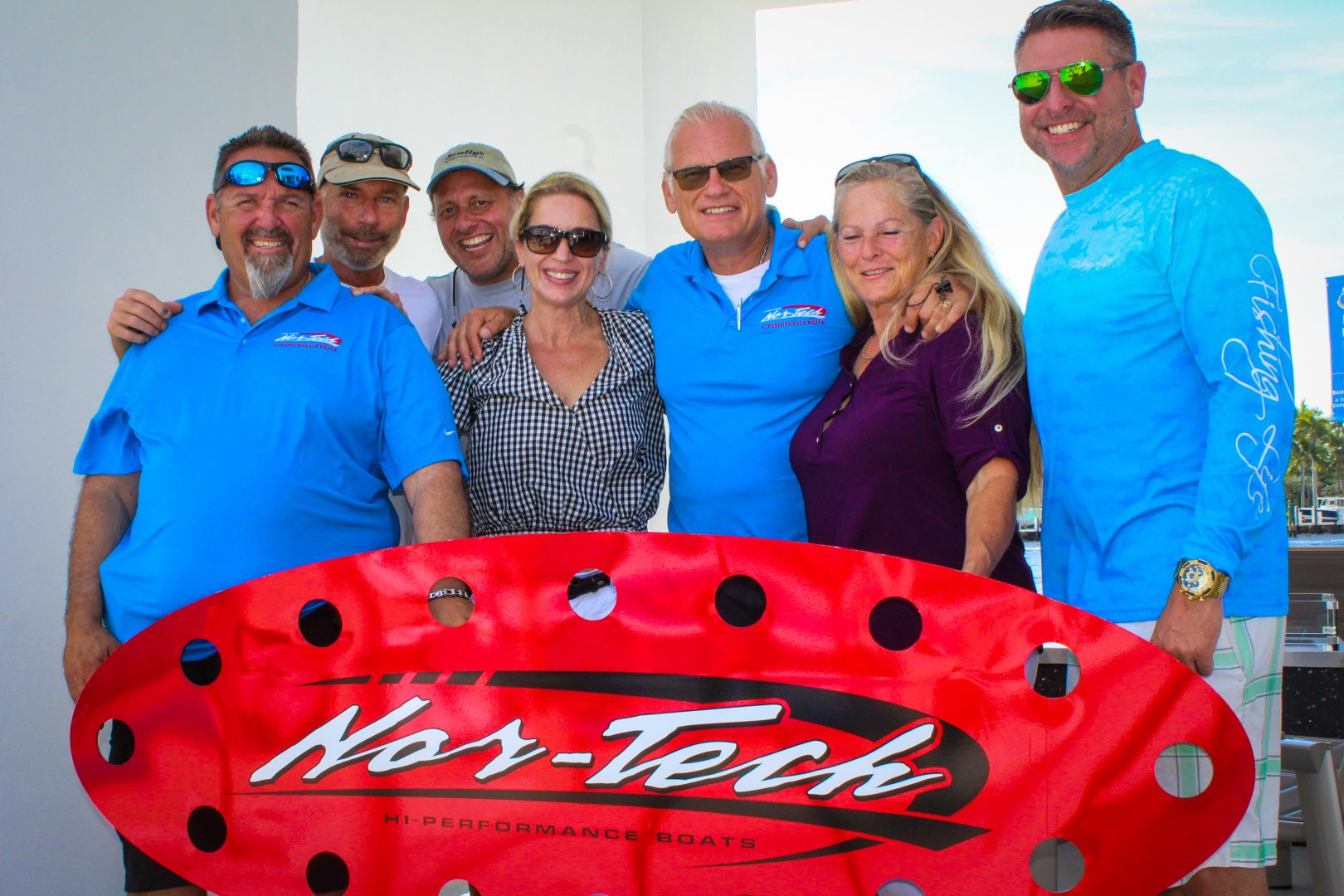 340 Sport​
To start let's clear up one pseudo notion: The 340 Sport is an entry level console. It's not. It's 34 feet full of bliss, with a bling factor mirroring that of its bigger 39' sibling, not to mention its parallel performance characteristics and sporty, super responsive handling. Next add three joyous descriptors as mentioned by the myriad of pilots at the helm: effortless to dock, nimble and maneuverable, and it's easy to see the overwhelming popularity with this wave-clipper.

Weighing in at 9,500 pounds and parading a 10' beam, an out-of-pocket price near $453,000 puts triple 350Rs on the transom and has you on plane in under ten. While the older models came outfitted with the triple 350 Verado package, from 2020 forward adding 450Rs to the transom is too a possibility.

If happiness can be had in the high 70s then the 350s should do it, but if the cherry on top comes from moving above 80 mph and you're the baller needing to hover at the front of the fleet, then you have your answer. Another major component for consideration before finalizing the purchase is which outboards to opt for, and the ease of obtaining the 250 gallons of octane to power them. Where will you run the boat is the million dollar question? Remember, the 350s burn readily available 89 grade, but the 400R Mercs were developed to drink 91 octane, so fill-ups and top-offs need to be sorted before the aquatic adventures begin.

The build list options are insane with the 340 Sport, and all Nor-Techs for that matter. After climbing on via built-in middle gunwale steps, made-to-order options jump out at you around every corner. Visually, the fun starts when greeted by custom-painted gunnels, helm seats, bulkheads and the surrounding console guarding the twin Garmin 7616s. 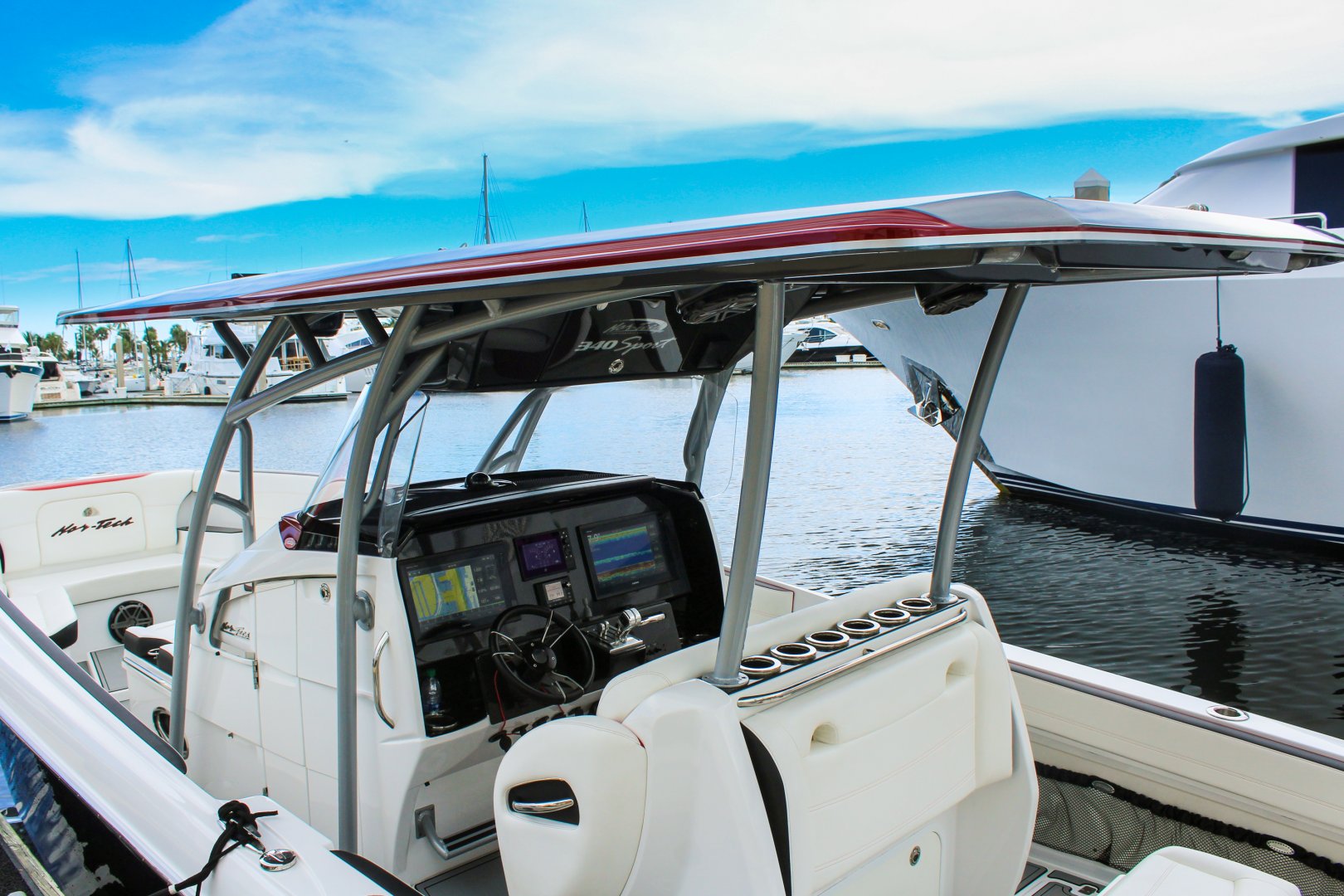 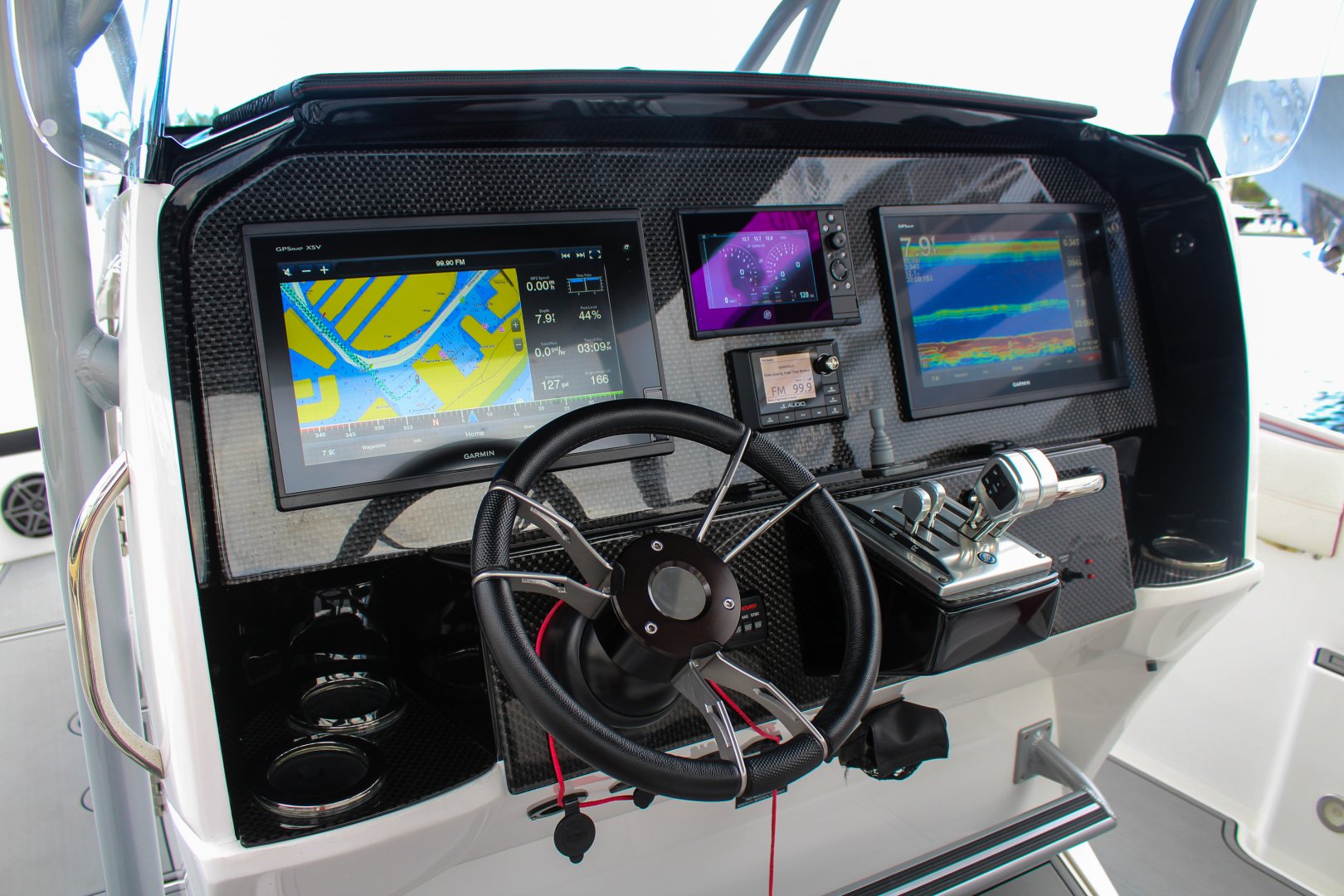 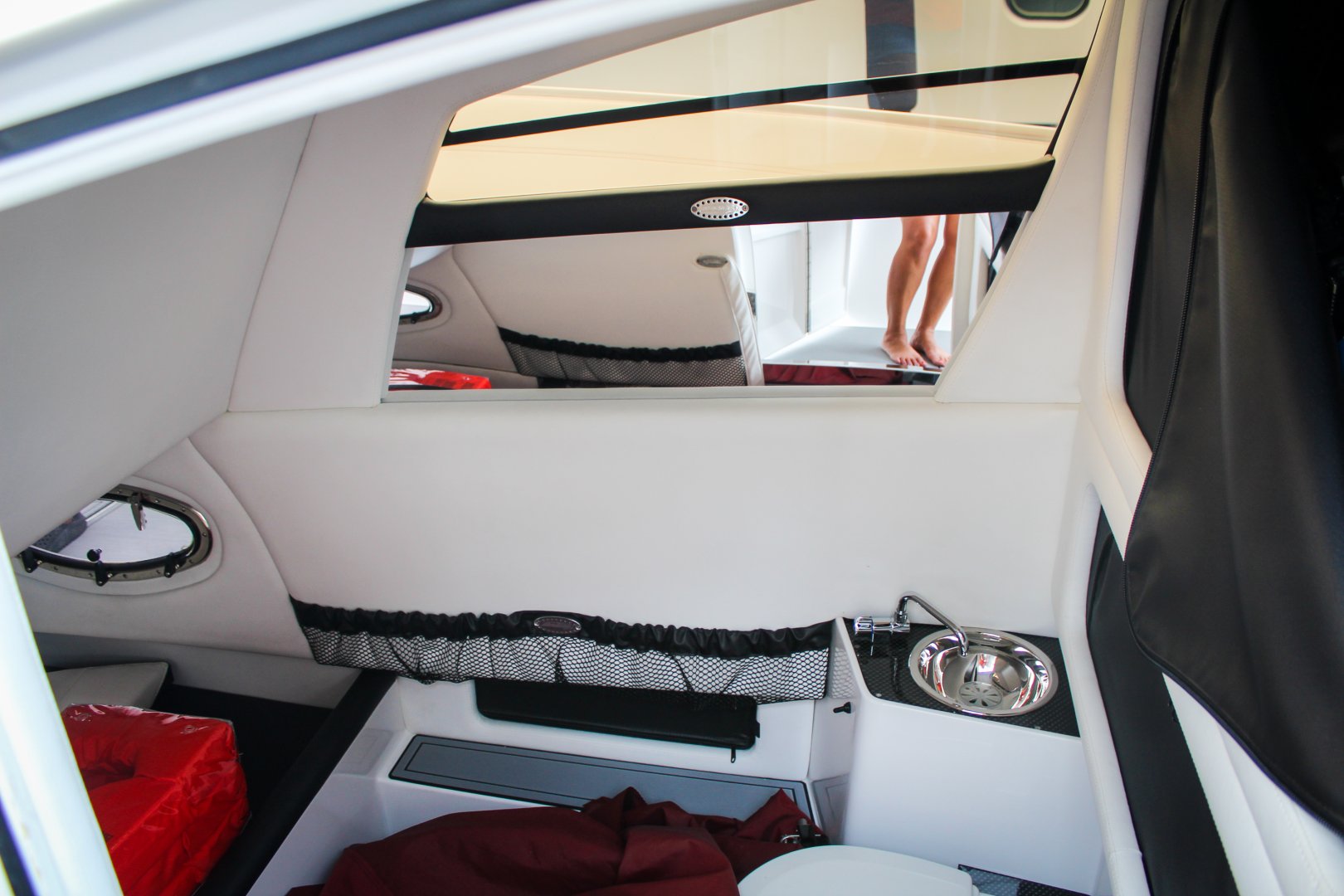 A couple years after building the first round of 390 Sport hulls, a slew of upgrades were unveiled including a redesigned bow with storage features to accommodate 8"rounded fenders and a shortened sun lounger with fold-down armrest. Further aft the new second row of seating option has been a big hit, as is the sliding cooler keeping the Coronas cold on the inside, and providing an upholstered top lid that makes for a comfy double bench for sandbar or chill out time. 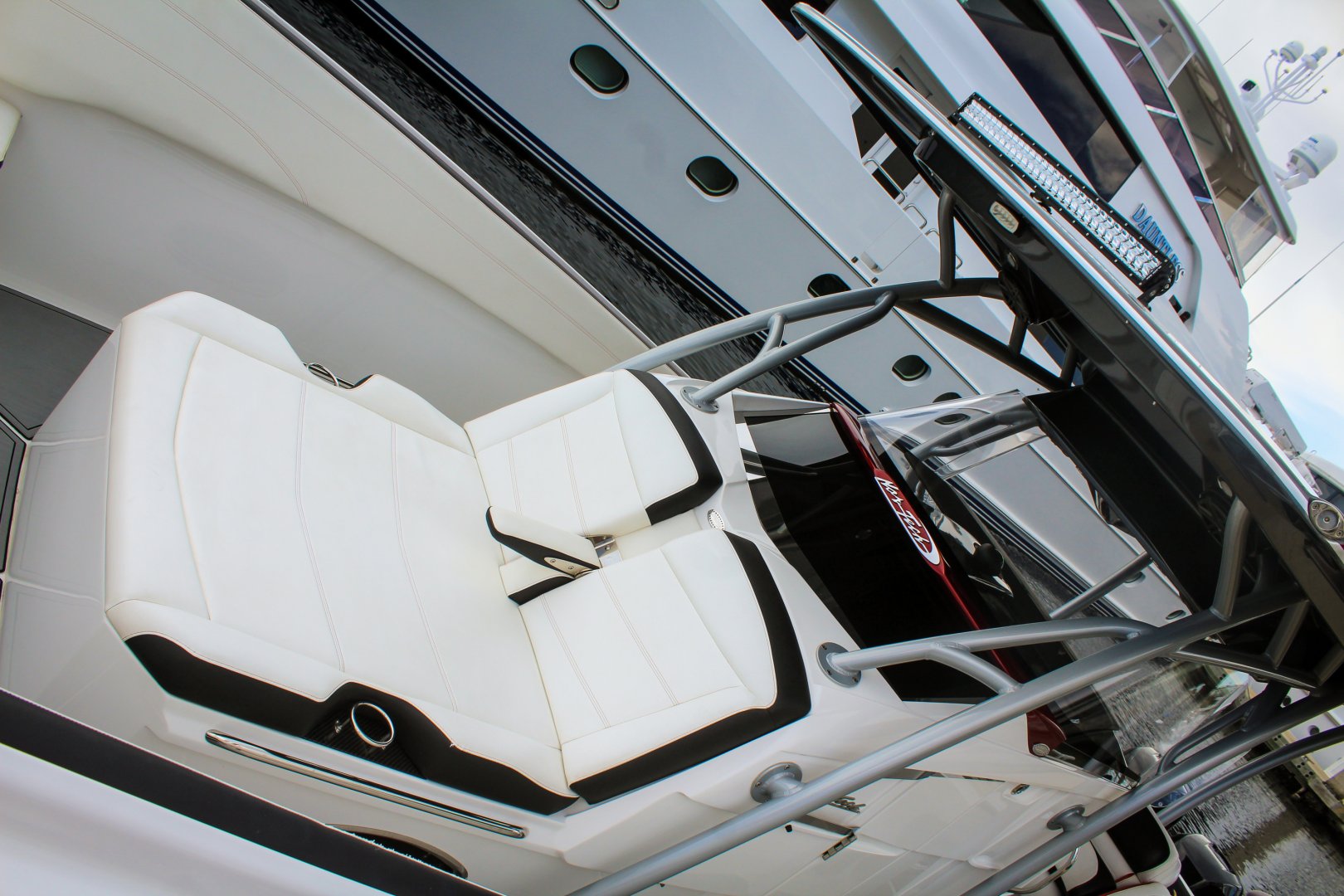 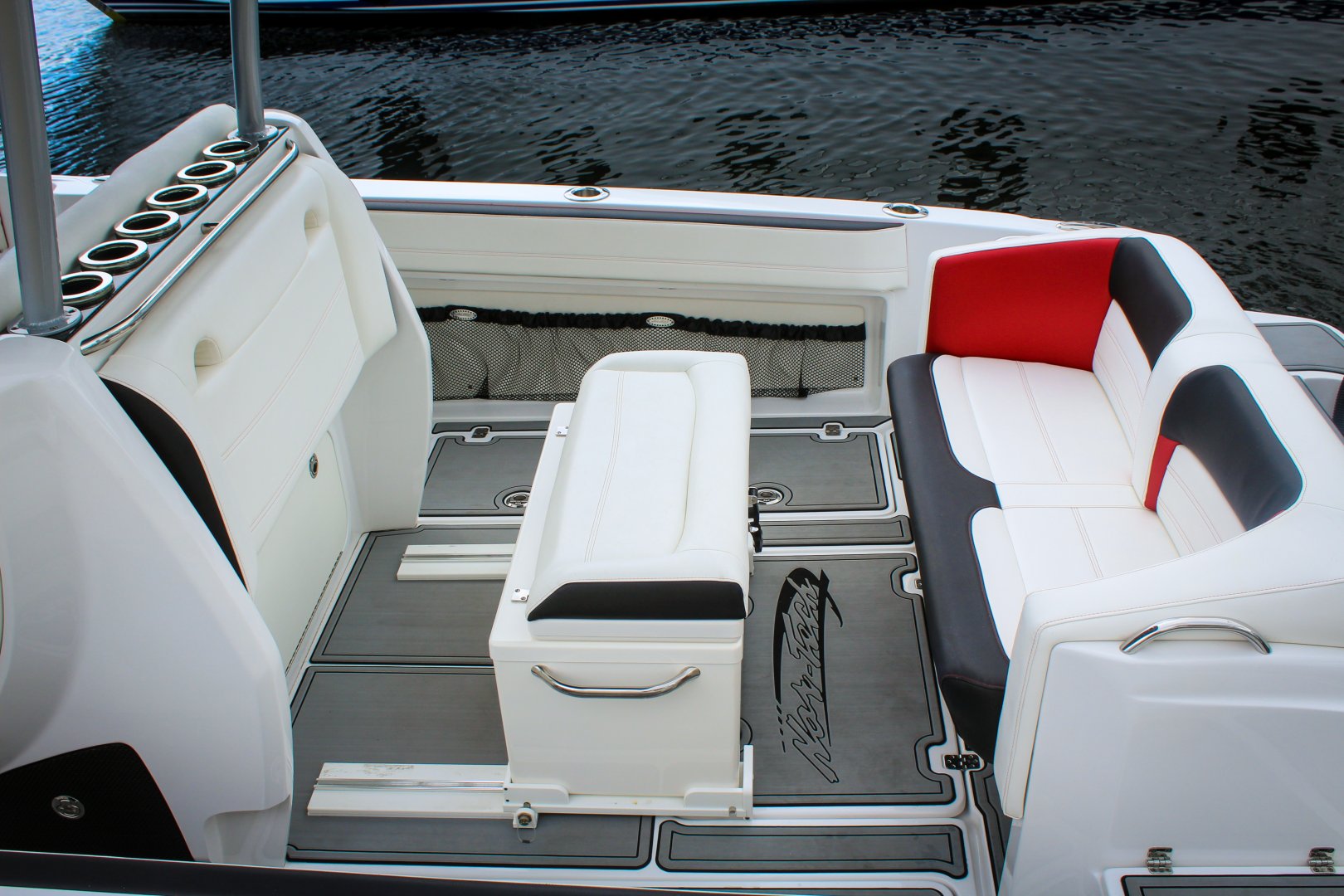 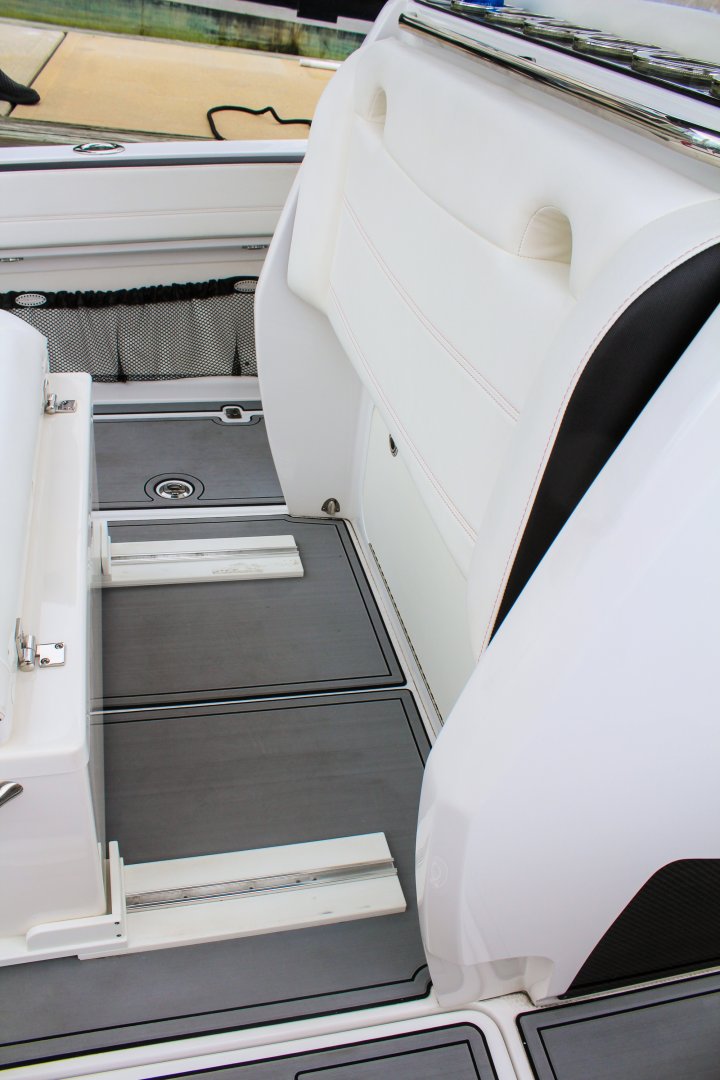 390 Sport​
Ta-da... here it is! Whether equipped with triples or quads, the Nor-Tech 390 Sport is the ultimate 12,500-pound water commuting pleasure machine. We've already mentioned the wildly successful model is the best seller ever. Period. Cresting at $600,000 or higher depending on each designer's desires, the 39-footer comes loaded with customized creature comforts and impeccable performance mannerisms; it was born to soar.

And soar it does, due in part to being graced with a stepped hull. By design, the steps boost speed and fuel efficiency by generating a cushion of aerated water under the running surface. Complete confidence and control handling the rough stuff; better views of the horizon from minimal bow rise; enhanced sightlines at all velocities from the flatter angles; and quicker plane times; all serve as examples topping the list of additional benefits. Furthermore, by tracking straight with limited push and pull, stepped hull center consoles create an angle of attack charging into the crests, whereby riders experience less slamming and sea spray at full bore.

Nonetheless, while praised by many powerboaters, stepped hulls have long been plagued by some because of their reputation of unpredictability, and the intensified likelihood of catching an edge and dipping into a wave. But there is no need for unnecessary panic since the aforementioned fear factors have been spawn from running speedboats, not the center consoles which garner nothing but grins from all guests.

The latest models have a full JL Audio sound system that comes with a new stern upgrade and color changing speakers, VesselView, Zero Effort throttles, twin Garmin 8617s, Lumishore underwater lighting, a bow thruster and a windlass. Sea Dek matting has also been extended around the dashboard which has become a fashionable dry spot to stash pertinent info, especially card hands collected along the way during poker runs. 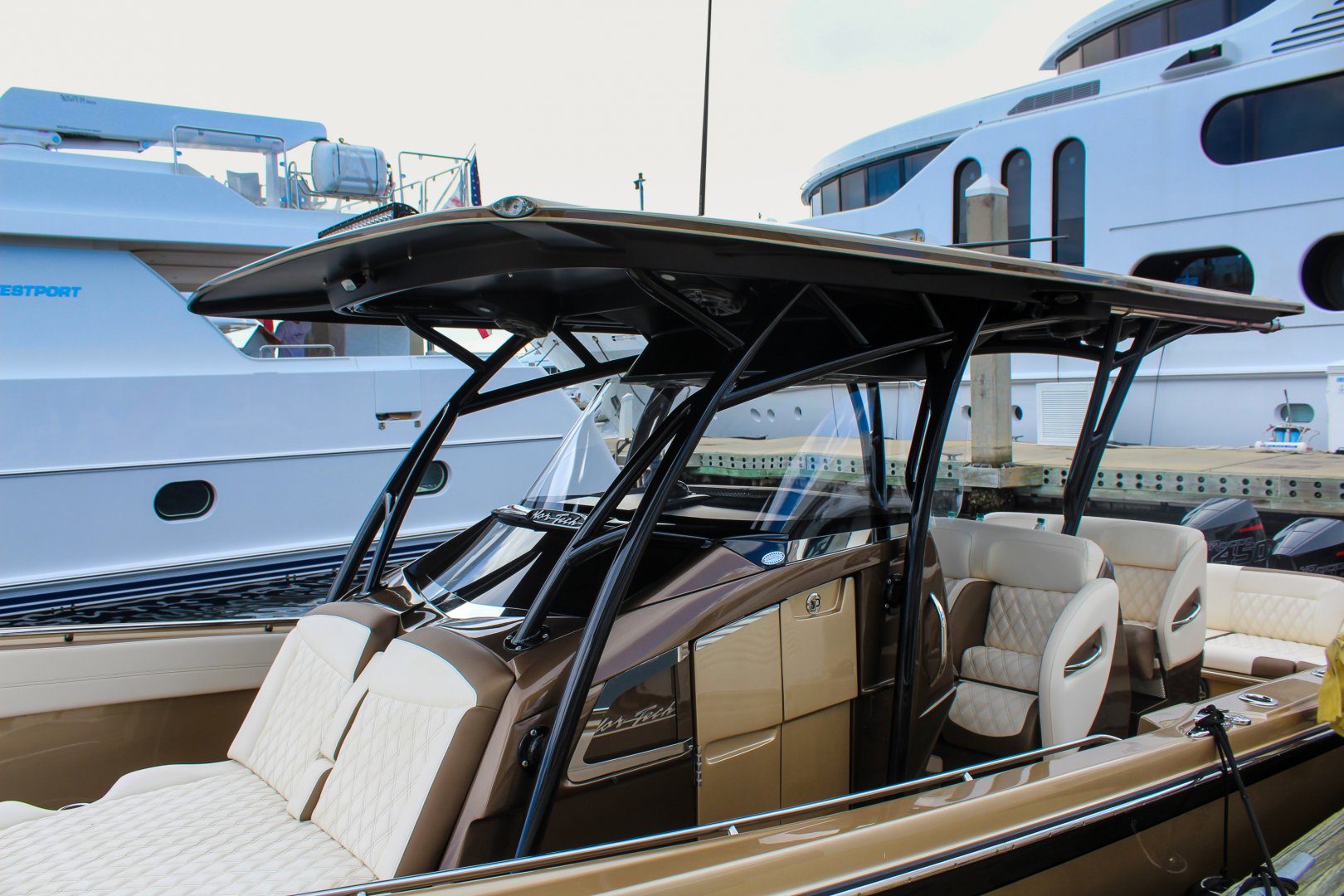 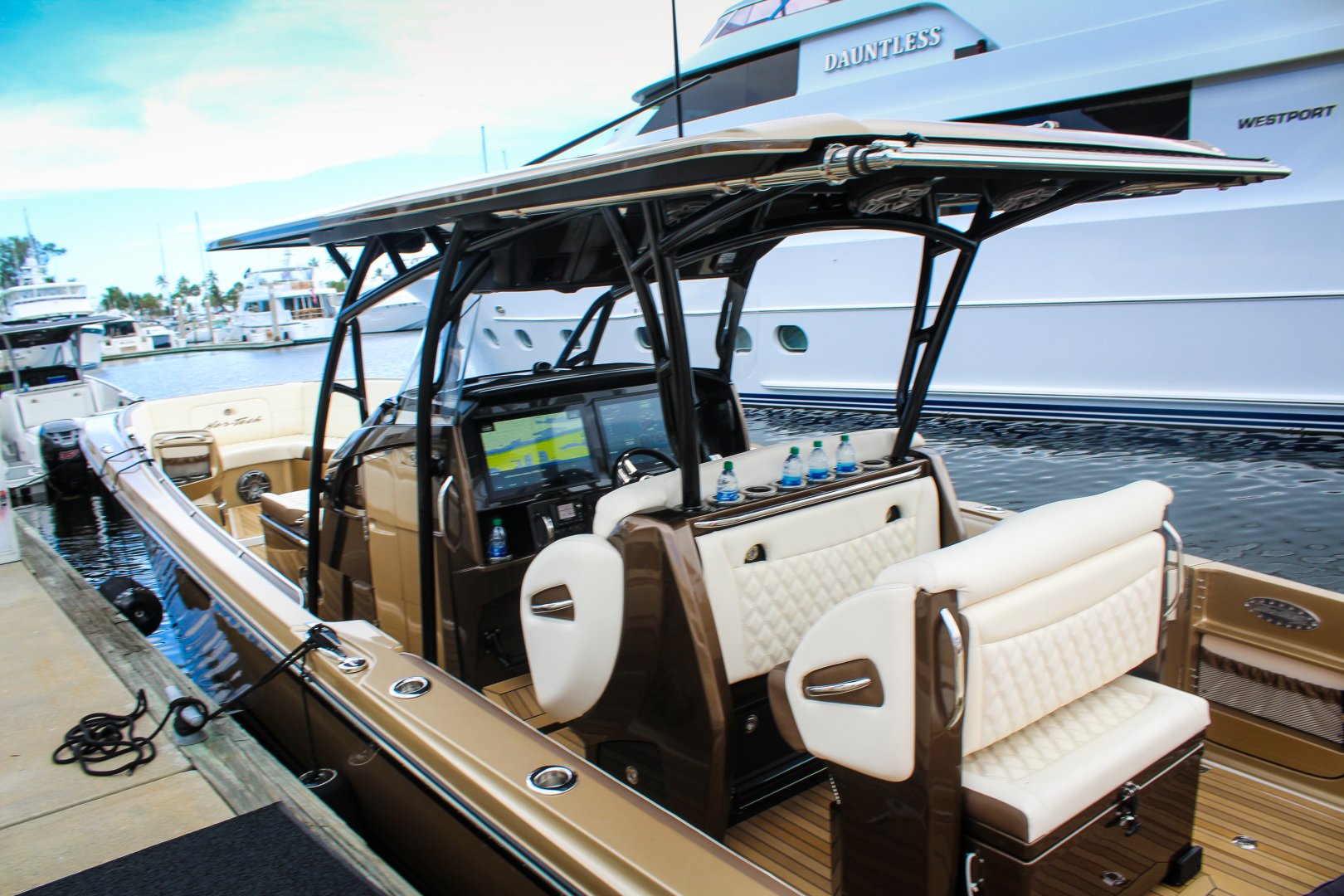 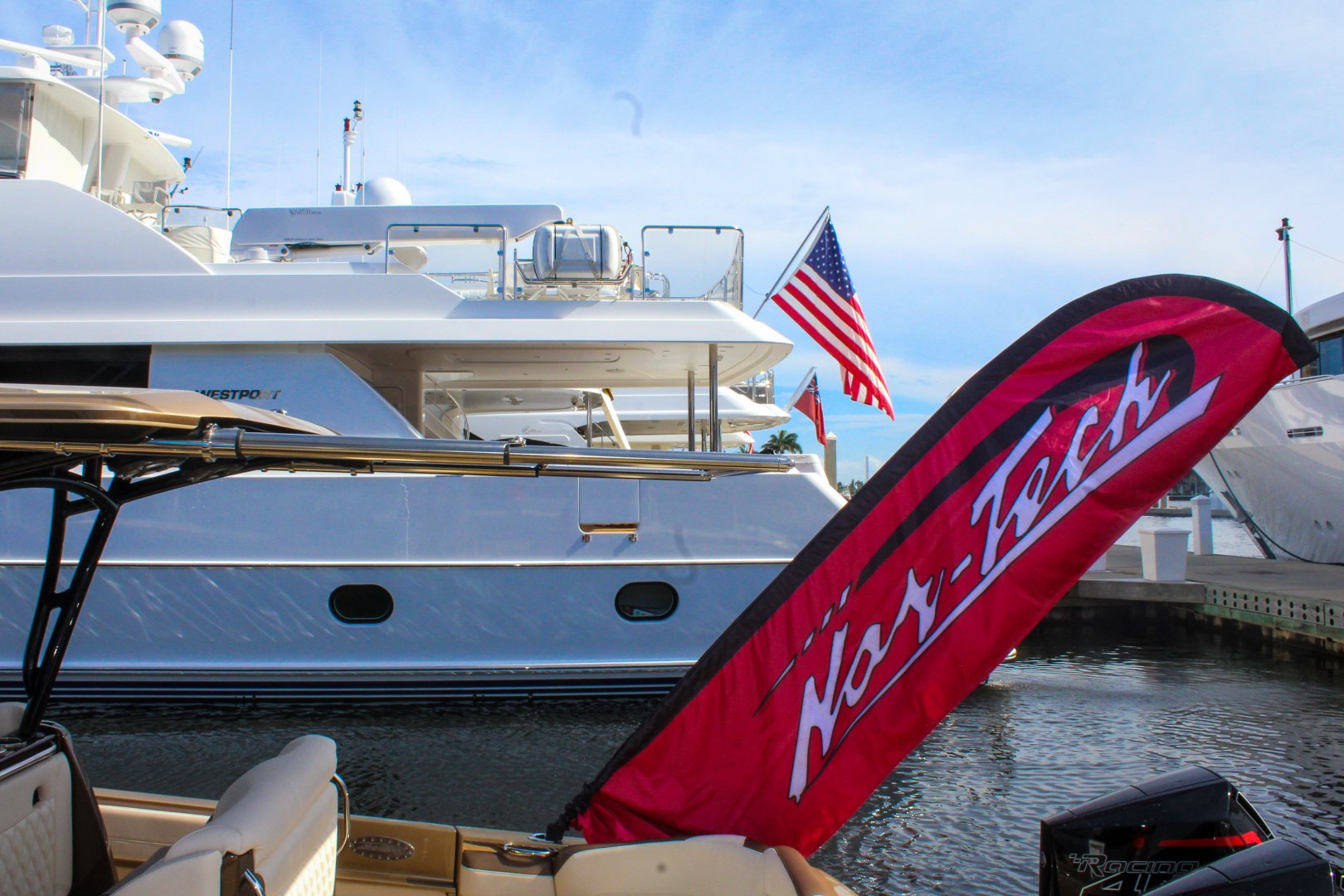 Guarding the envelopes is a key concern while flirting near 80 mph in the 390 Sport, but so is safety. Nor-Tech provides an extra level of security with a trio of individual manually-folding cut out seats that work to lock the captain and two mates in tight, and secure hand rails prevail around the entire vessel. A full seven feet of seating space fills the entire width of the transom, and a clever corner cushion lifts out to reach the rear swim platform. 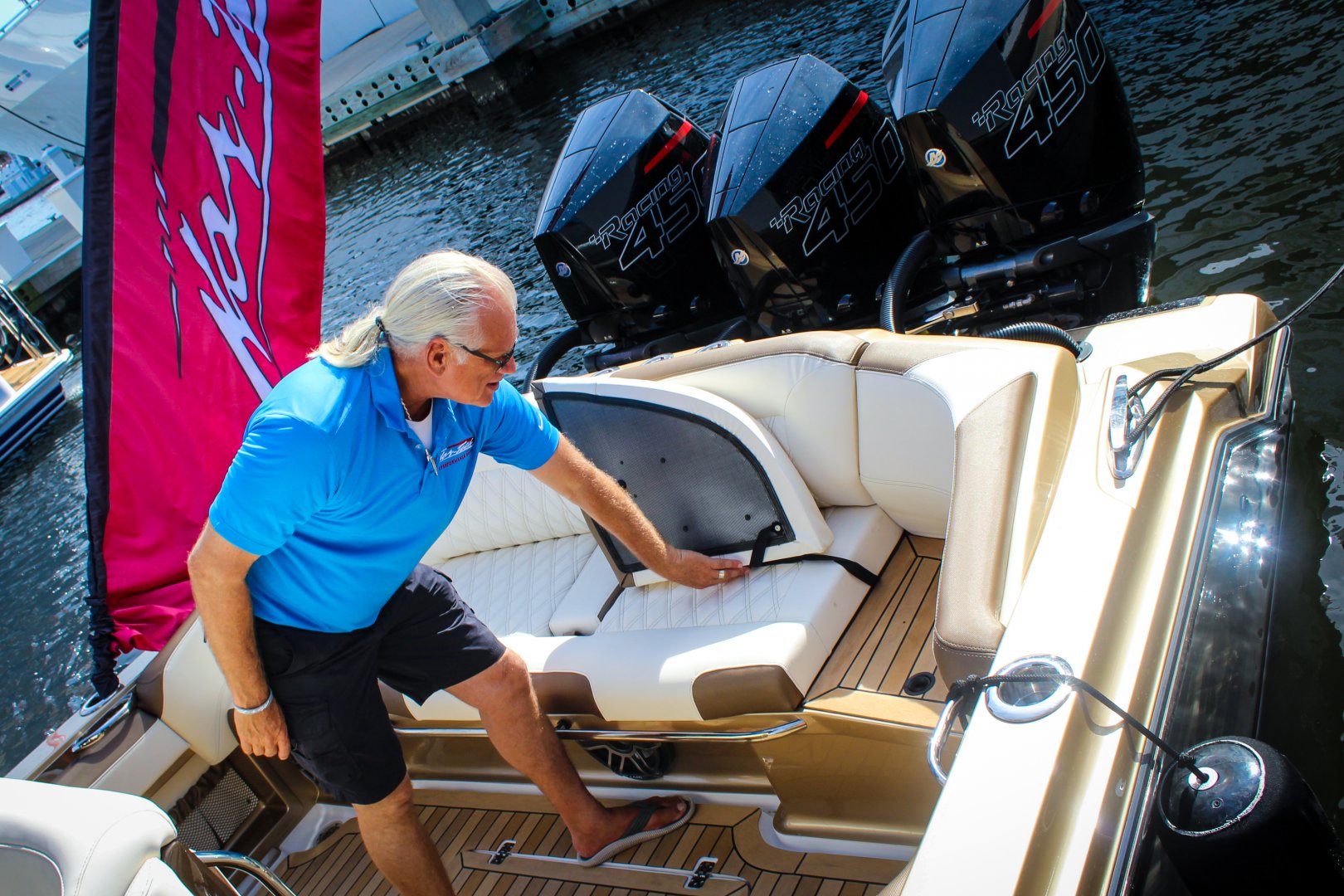 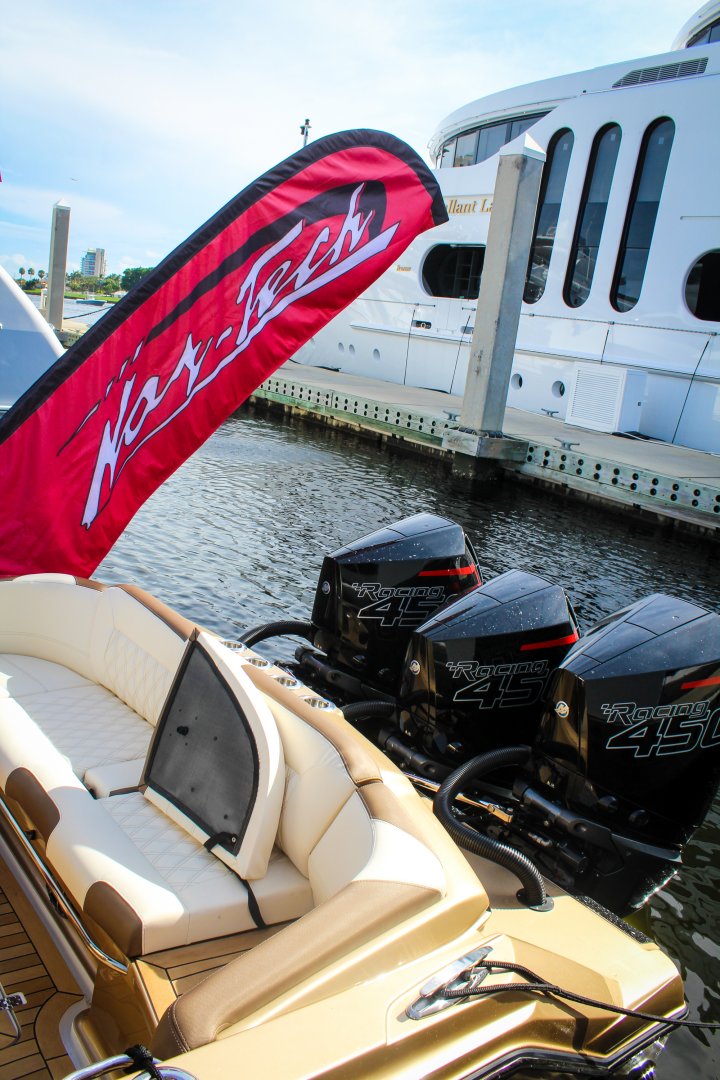 450 Sport​
The head-turning 450 Sport is "Simply the Best" just like Tina Turner sang out in the 1980s in her little black leather mini-skirt. Let loose in 2016 at the Miami International Boat Show with rave reviews, Henrik Margård informs me that hull No. 25 was just delivered. The longer, sleeker distinctions of the 450 Sport speak volumes — it exudes class over flash, flaunting itself like a flying condo on water. Holding 460 gallons of fuel, the "movable house" averages 400 miles at an efficient 1.1 mpg. 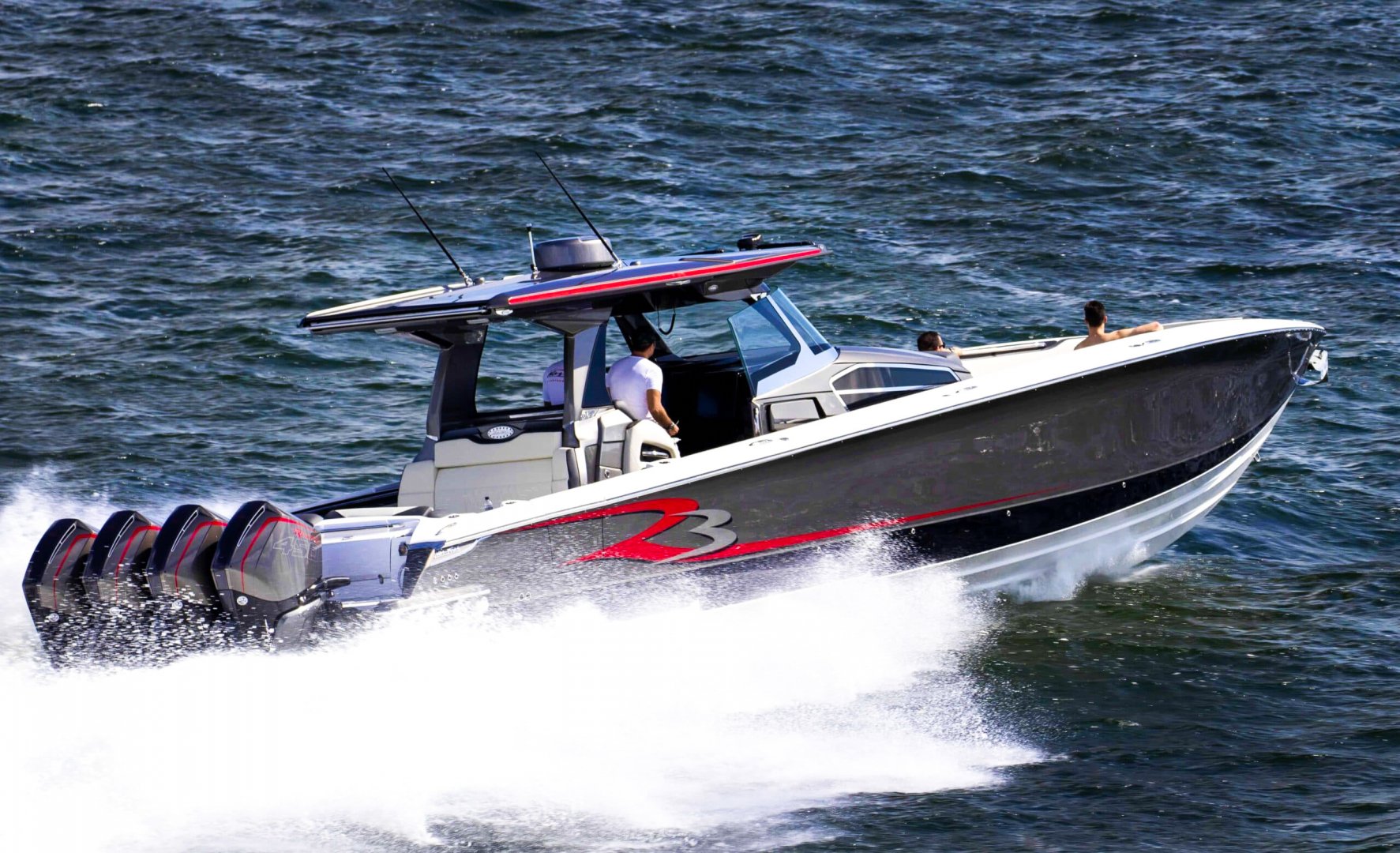 The double-step 22,000 pound hull with a massive 12-foot beam provides ample walking passages and freeboard for walloping wave encounters attempting to join the on board party. Equipped with a foursome of Mercury V-8 450 outboards (a five-pack is also available) , the 450 Sport will squeeze $1.3 million from your spare change draw, and have you cruising between 45 to 50 mph and cranking out 80 mph at WOT, as recorded on the recessed 22" Garmins.

Carbon fiber details that surround the T-top frame, upper storage compartment, helm station, and side panel wind-blocking doors sheltering rear-riders from the wind, are well balanced and convey a minimalistic tone and premium first-class level of attraction. Adding to the attraction and appeal comes the satisfaction of having a Northern Lights generator that powers the refrigeration system, air conditioning and batteries, and a cold plate system that eliminates the schlepping of endless bags of ice. 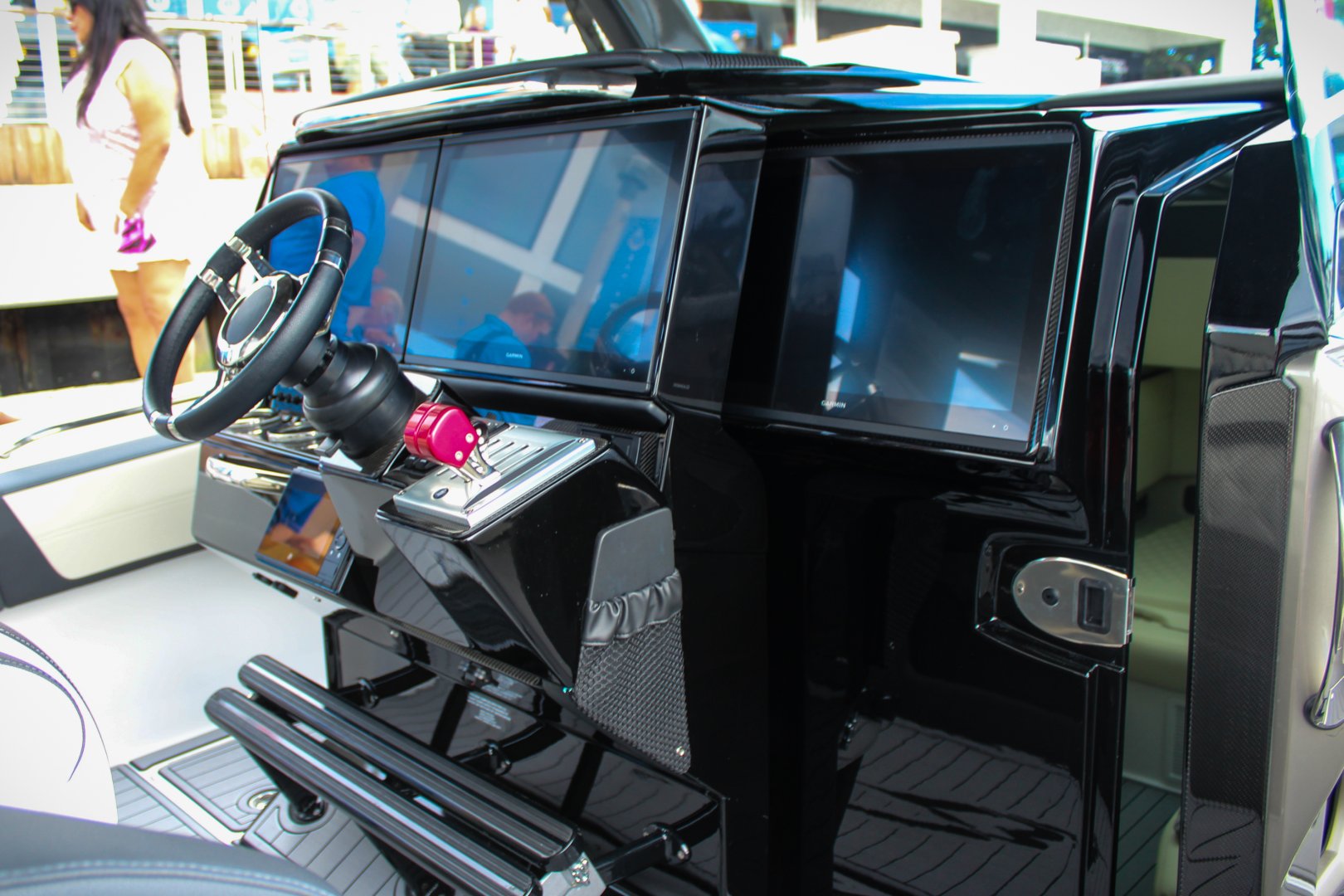 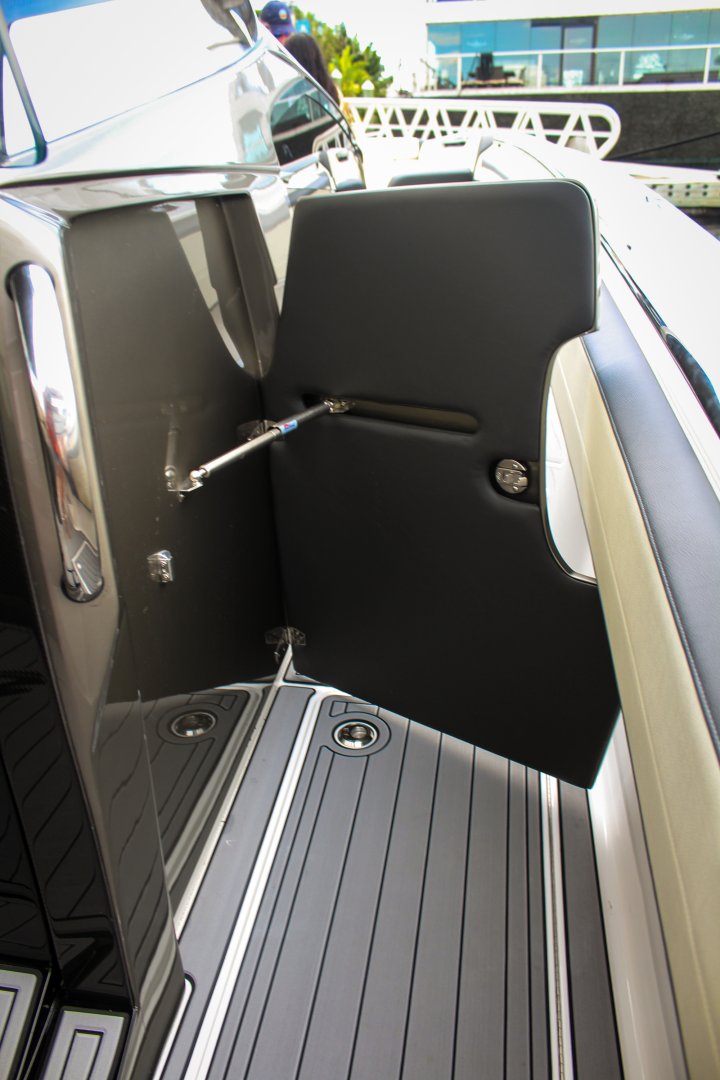 Upon entering the cabin from the starboard side of the helm, a spacious enclosed head and shower takes up the one side, and special light changing windows provide an extra layer of privacy in the two person berth featuring an electrically-controlled bed capable of being positioned as a lounge to enjoy the flat-screen television mounted on the wall. Motorized controls appear again out front raising and lowering the footrests on the double-diamond stitched bow lounger. The spacious sunbed can be configured for bathing beauties looking to stretch out, before being converted into a prime happy-hour spot by removing the center cushion to further raise the table up. 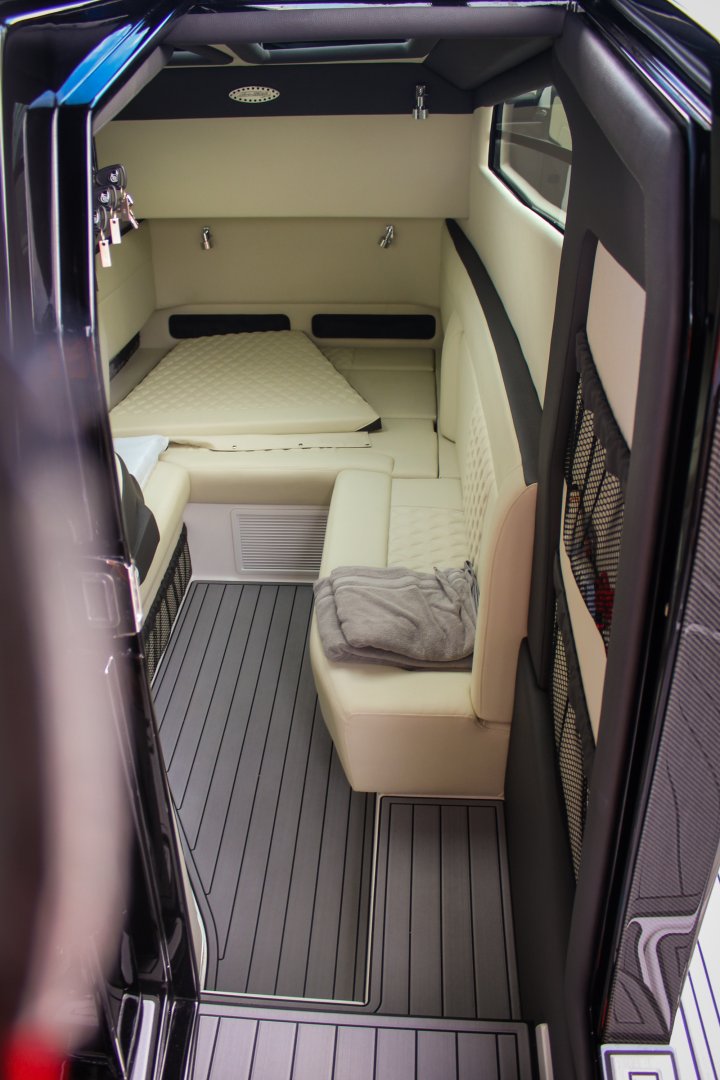 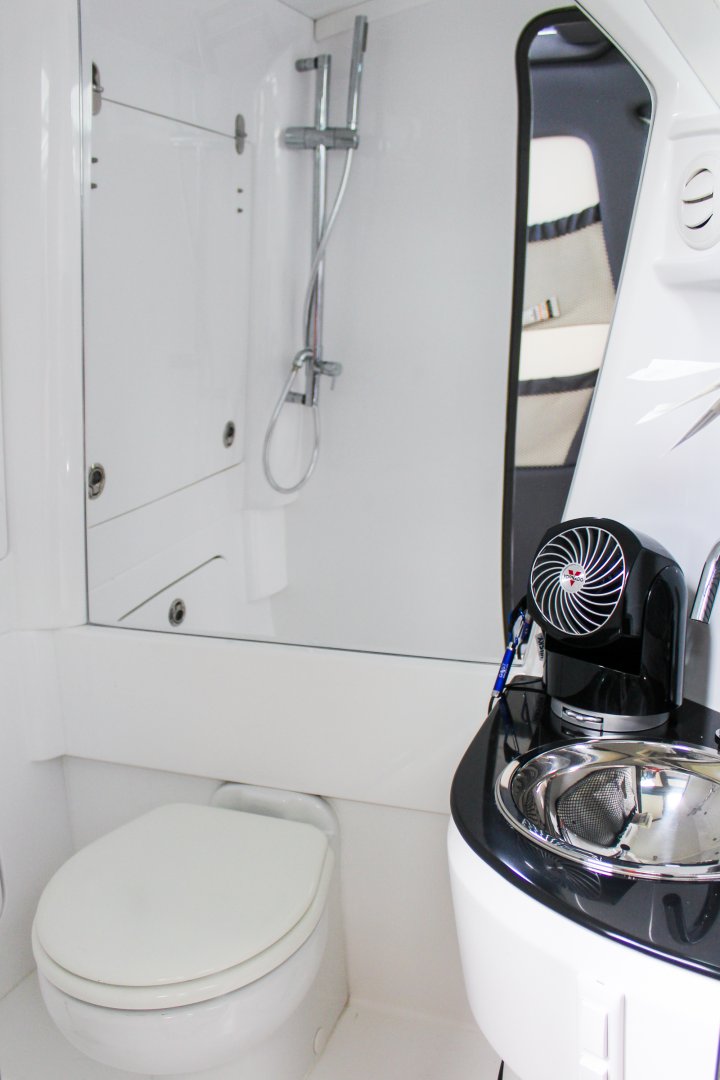 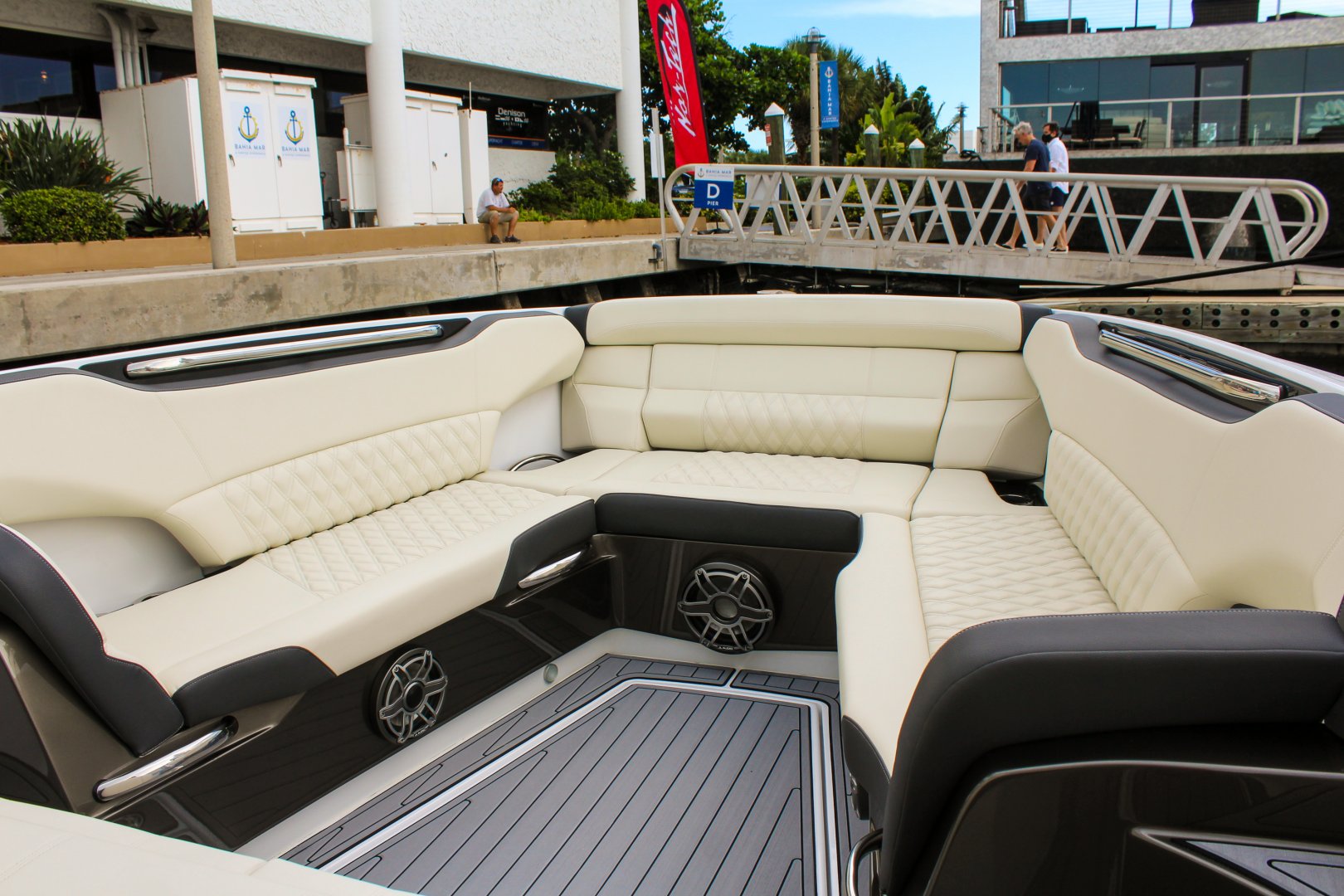 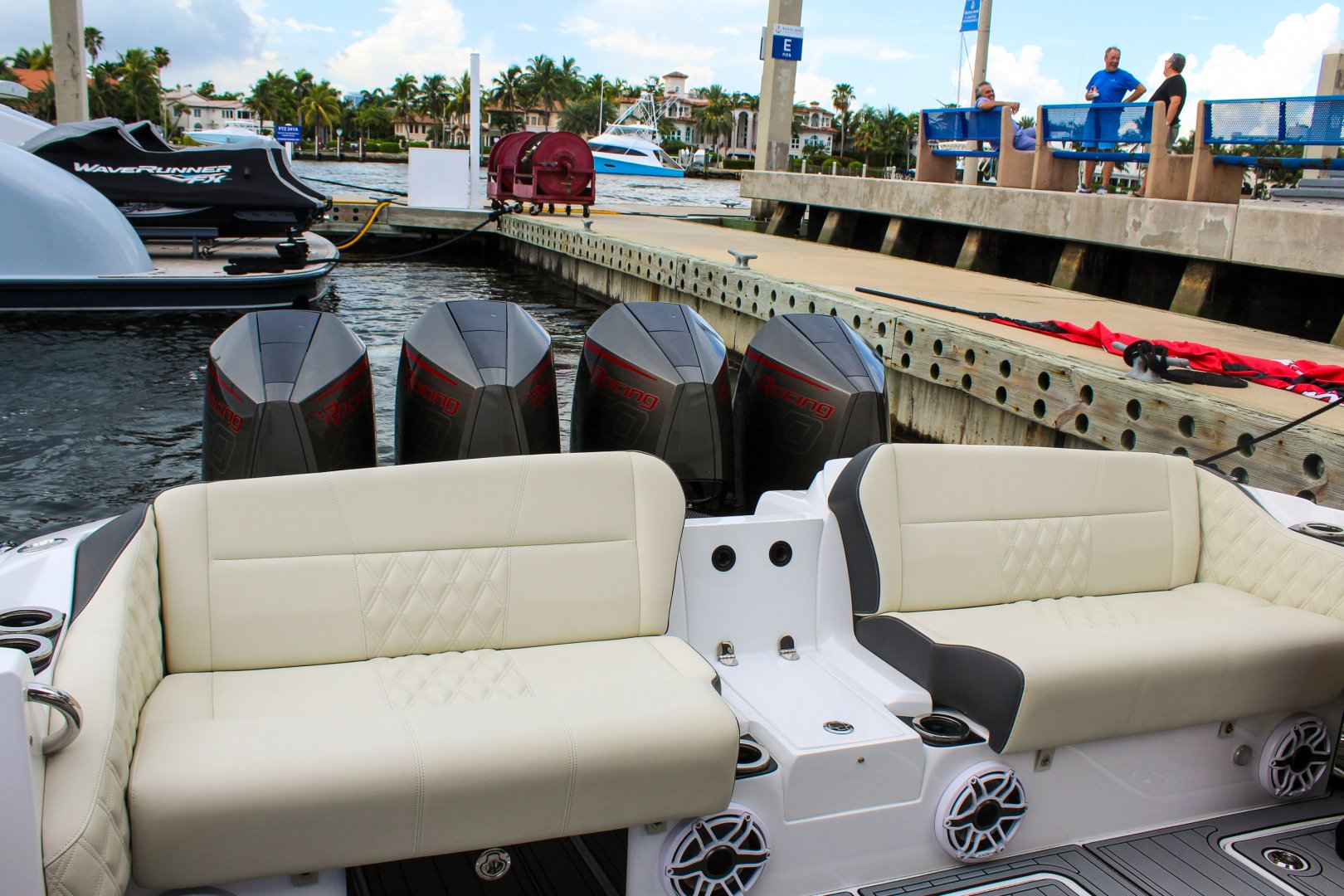 Besides the fun in the sun attributes on the 450 Sport, if fishability factors into your nautical escapades but you don't want to go with a full-on 392 Superfish or 452 Superfish; Nor-Tech has got you covered with its concealed fishing package. Hailed by marine industry experts as "the magic hybrid for fishing and fun", it comes loaded with a small livewell in the middle under the seat and another at the transom, storage lockers are converted to fish boxes, and rod holders are abundant along the gunwales and overhead.

While I was on and off the boats snapping my pictures (that fail in comparison to RDP's professional photo guru Austin), just as I was admiring an older Nor-Tech called UCrazy that was not part of the demo; the owner Michael Tripp and his wife and daughter were coming down the dock.

In addition to the boat's moniker, I couldn't help but notice the green and orange University of Miami flag. As an alumna, we had the "Canes" thing in common and I began chatting with the die-hard UM family. I learned Tripp had recently bought the 2011 Nor-Tech from Bob Crow, and the family had passed by the Bahia Mar to say hello. To get an idea of how far Nor-Tech has come along and truly mastered creating center consoles over the last decade, I included a few shots of the equally awesome 2011 model for comparison. 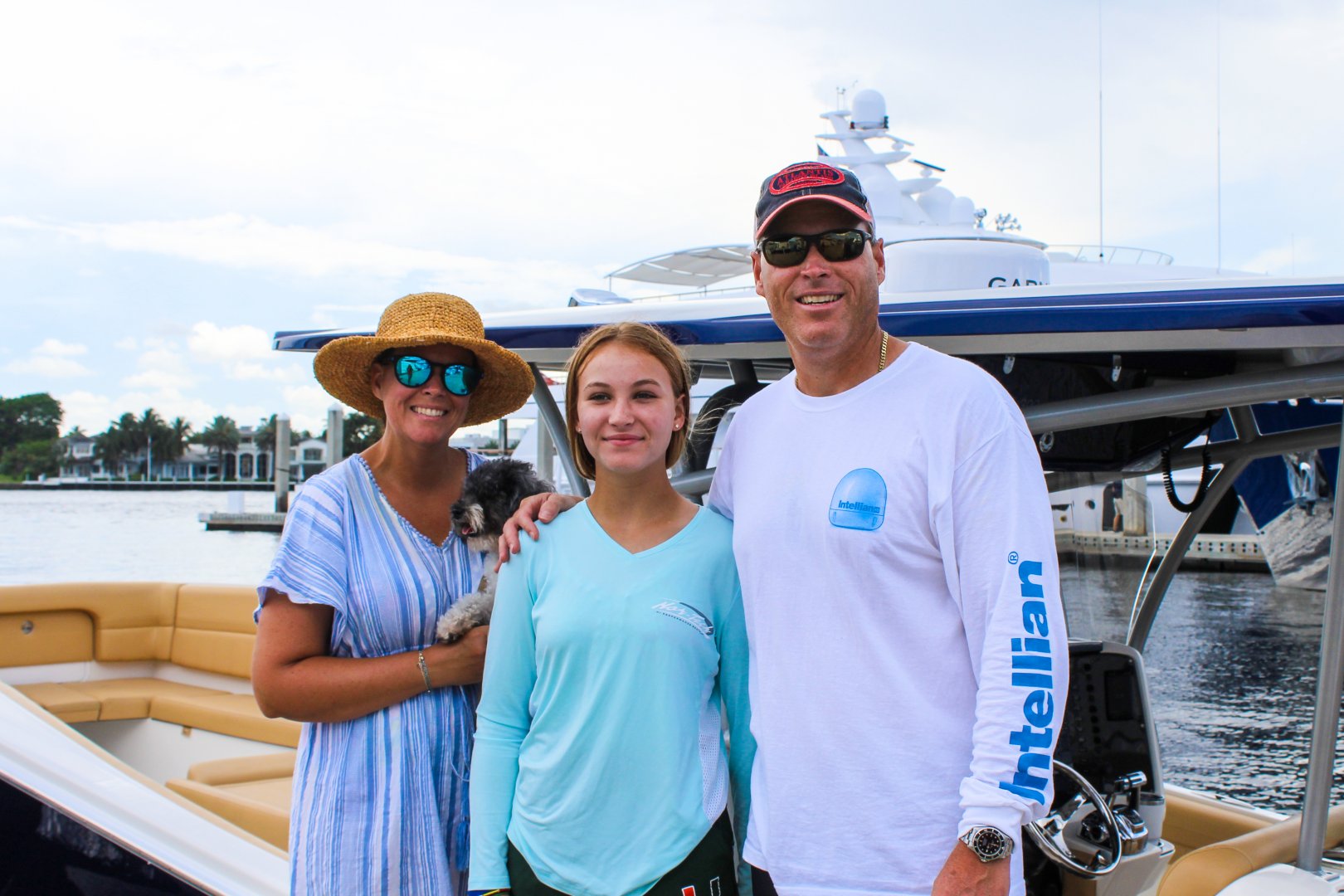 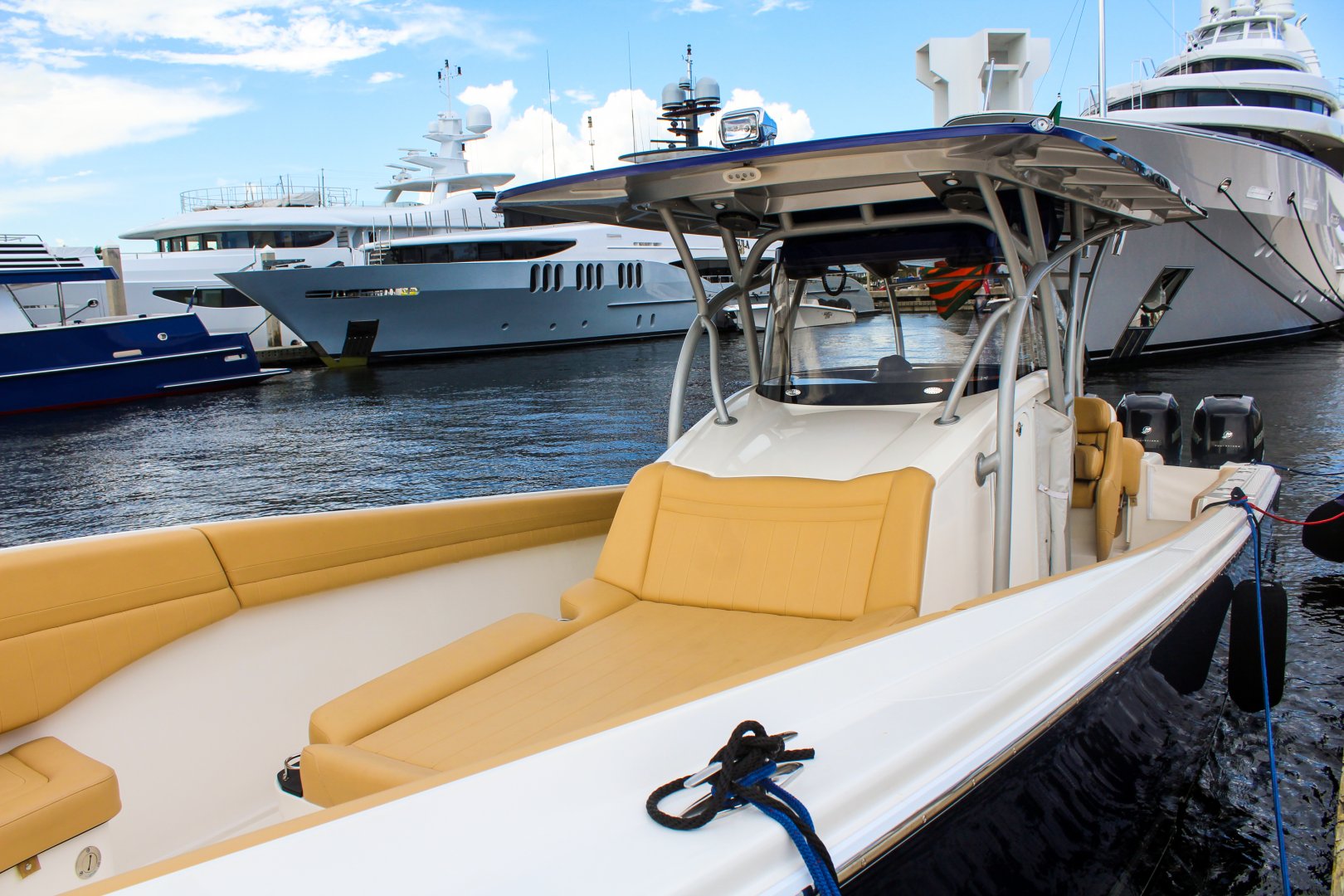 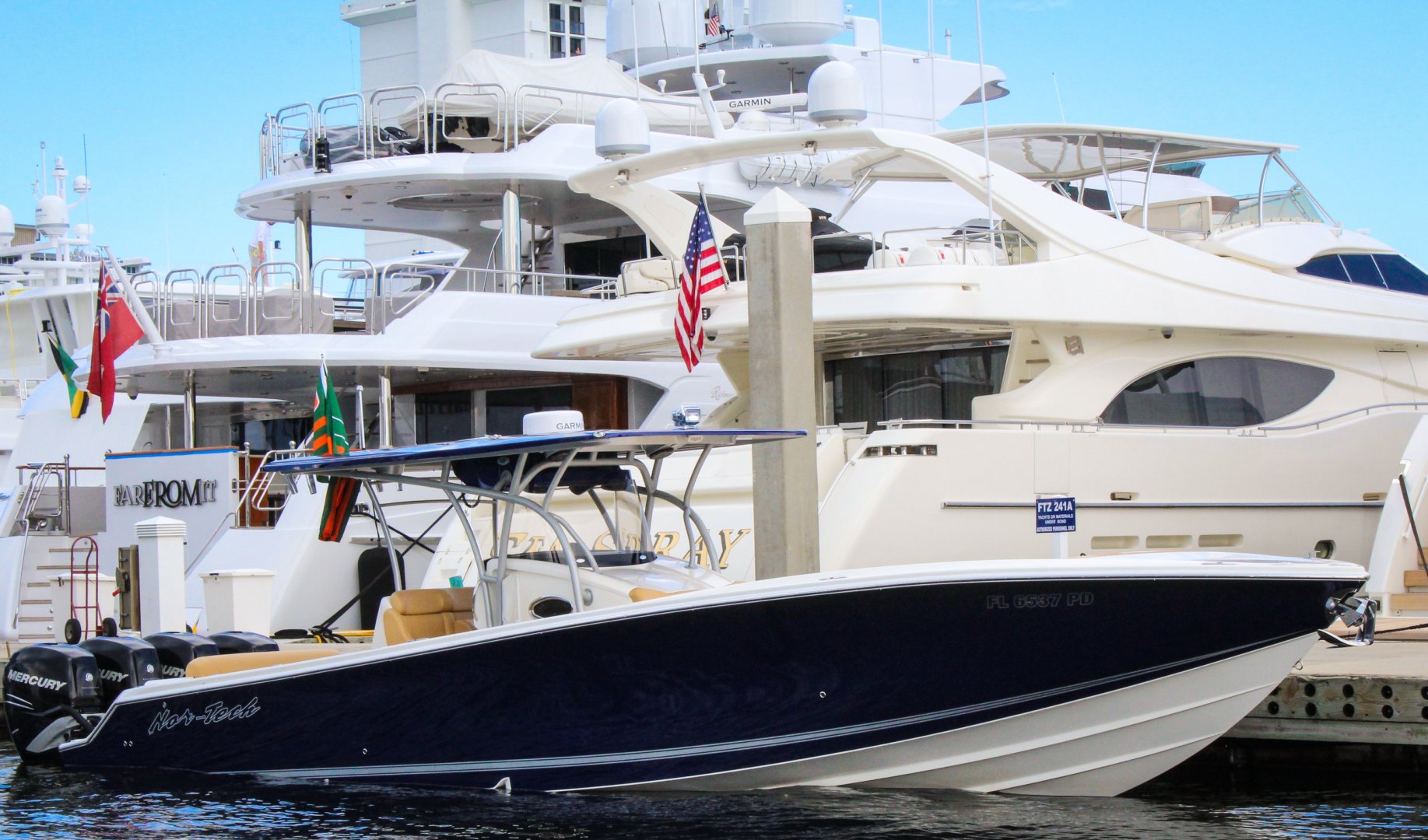