Outrageousness at Outerlimits: Cats, Consoles and Counsel from Steve Curtis

No matter the situation or subject matter, OUTRAGEOUS and MANUFACTURED best characterize the year 2020, and it will be forever marked as mind-blowing. The same could be said about Outerlimits Offshore Powerboats. Literally. Over the last months, the high-performance flagship has MANUFACTURED new outboard engine set-ups on its four latest OUTRAGEOUS out-of-the-box builds: the SC 37 catamaran and SV 29 V-bottom (both introduced here), and the SX 39 center console and SR 36 rigid inflatable (RIB) slated for early 2021 and soon to be profiled on RDP's new partner website, Luxurycenterconsoles.com.

The time was right! Demand for outboard power was there from faithful customers (similar to the SL 41 built two years prior for longtime OL owner Dave Burgess), and interest was on the rise from new clientele. My interest was also escalating. Anxious to see how things were progressing, I was psyched when this past August while up in the Northeast, Jason Amaral, production manager, and Dan Kleitz, national sales manager welcomed me to the Rhode Island headquarters for a peek. Being it was my first time on the premises, from the moment I walked through the door I was in overload mode with my eyes doing Travis Pastrana 360-degree flips taking it all in. 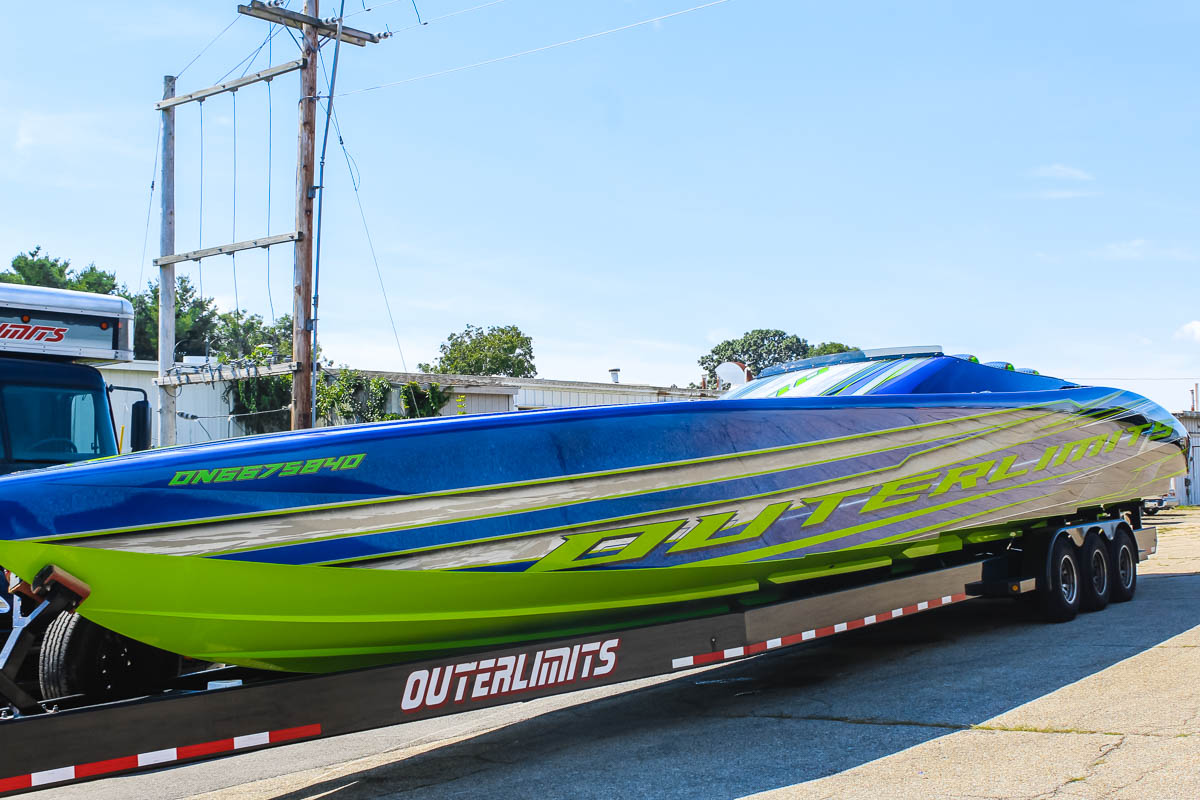 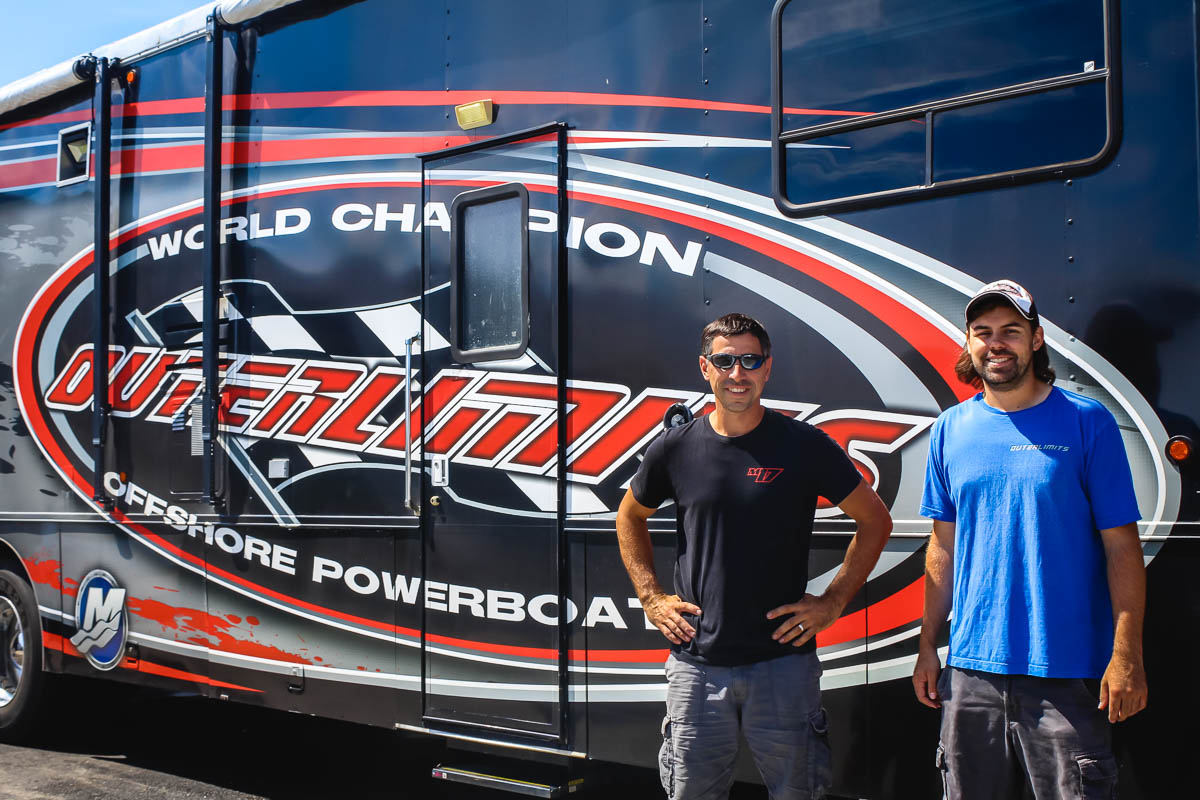 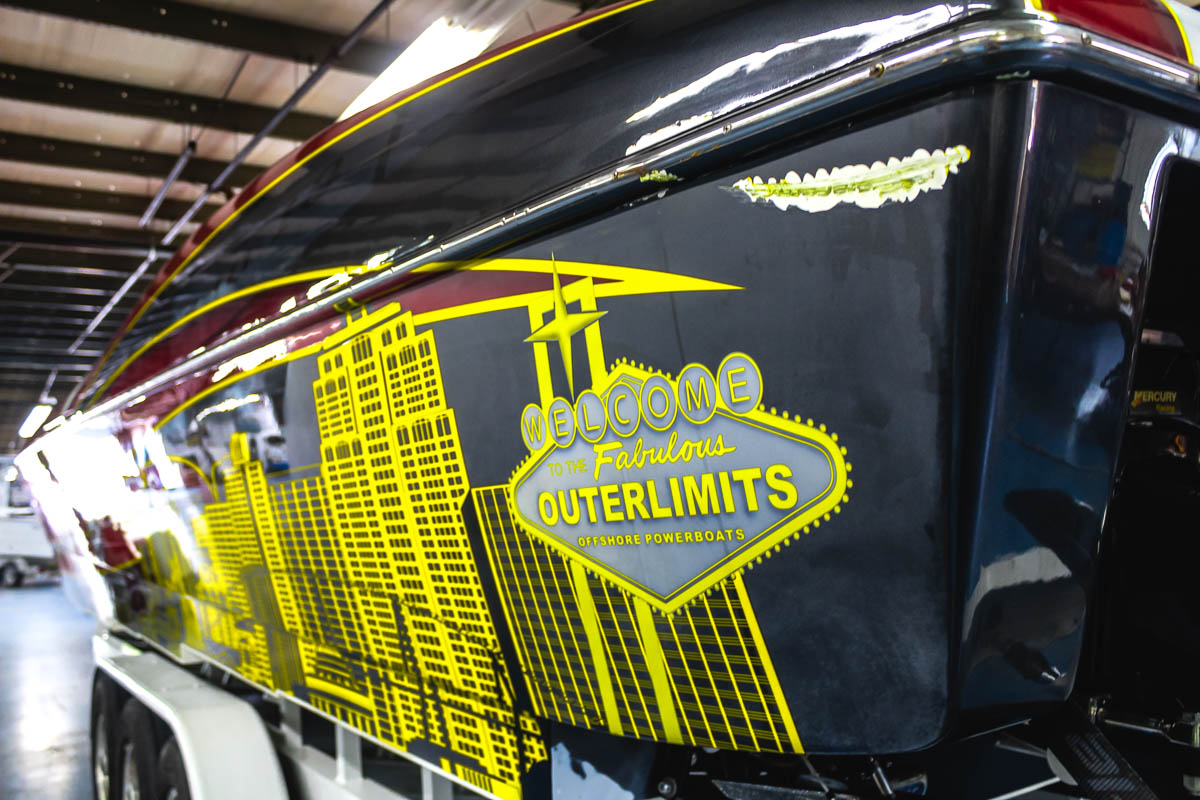 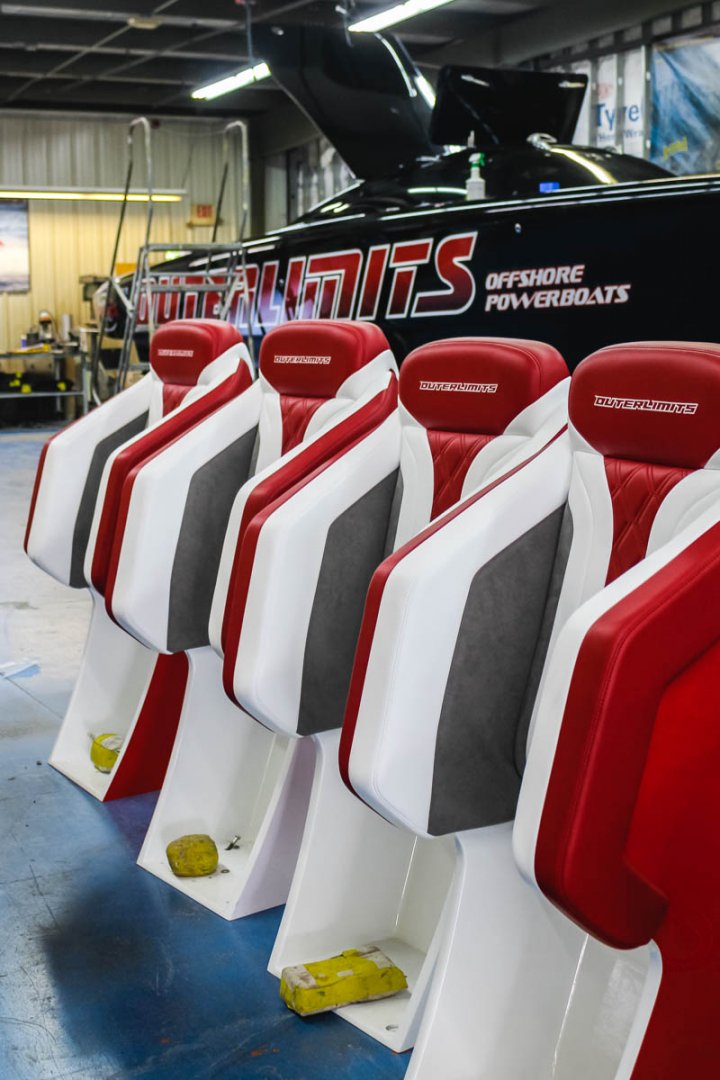 You know you've arrived to the small custom facility located off Bristol's bustling Route 136 when upon entering the spacious executive area, lining the floor are a myriad of trophies and bolster seats from mean machines like the SV 43 that Brian Forehand forged the 180.470 mph V-bottom kilo record in… and the walls resemble the halls at your kid's elementary school art fair. Only better!

From top to bottom, they're plastered with Outerlimits accolades, accomplishments, fun run fanfare, chronicles of championship races and special memorabilia paying homage to the trio of Outerlimits figureheads who have departed the world – Mike Fiore, the founder who passed away at the 2014 Lake of the Ozarks Shootout; Joe Sgro, Fiore's racing confidant who purchased the company in 2015 and also lost his life in a powerboat wreck; and Fiore's recently departed father Paul, founder of Hustler Powerboats, (innovator of the modern stepped-hull design) and a staple at the business alongside his son.

The Fiore and Curtis Connection​
With such a dark cloud of sorrow cast over the Outerlimits family, a silver lining was cast into the light making the speed-orientated souls in heaven smile brightly; his name was Steve Curtis. The high-performance heavyweight with an unmistakable British accent, brass balls of bravery on the throttles, and a foundation in fastboats like no other, came on board as a consultant to continue Fiore's legacy, which began in 1993 when the 23 year old founded Outerlimits in Holbrook on Long Island, NY. A 37' stepped-hull V-bottom branded as the Stiletto started things off, backed by more than 400 jaw-dropping, wave-hopping powerhouses varying in length from 29 to 52 feet. 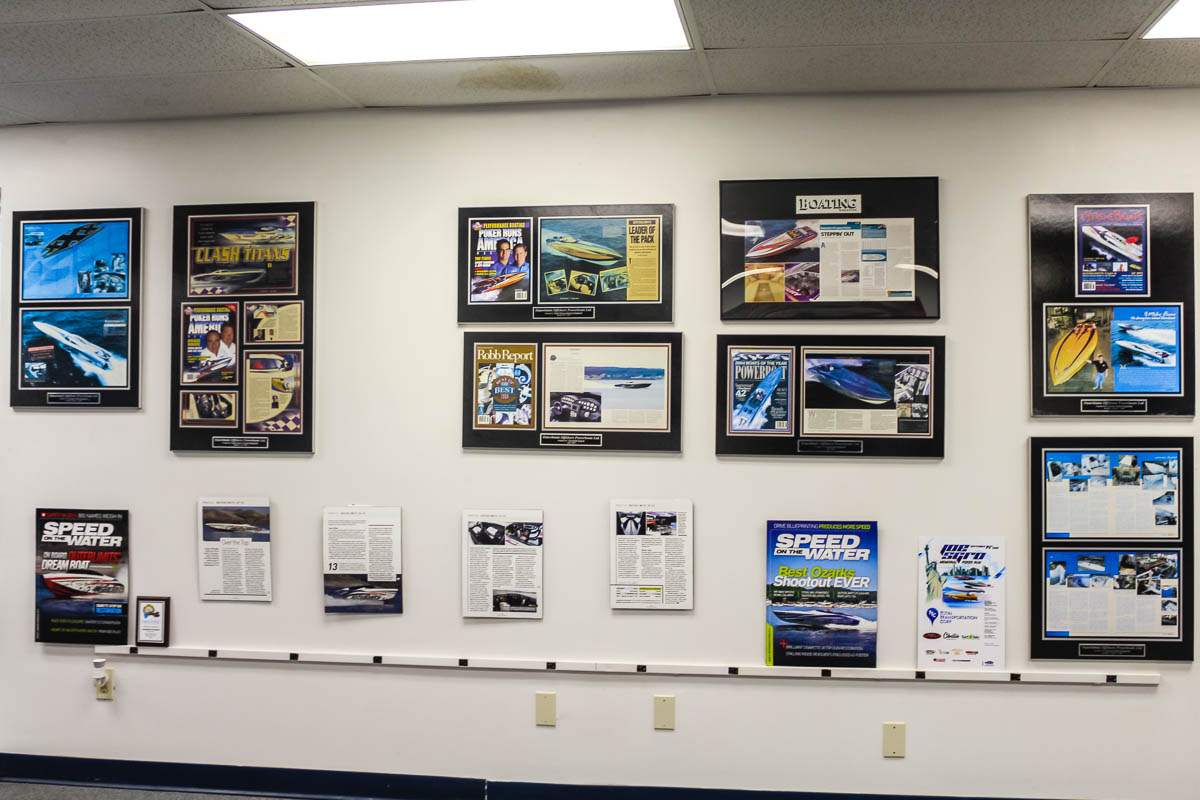 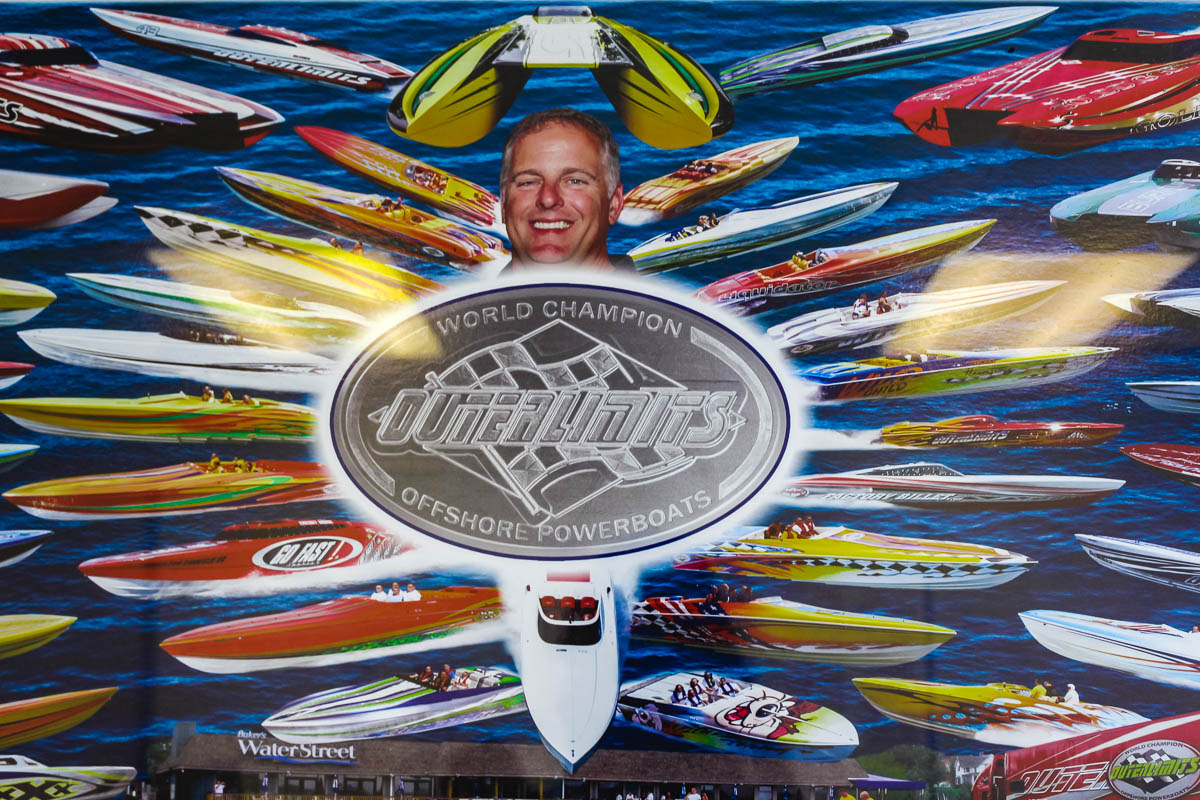 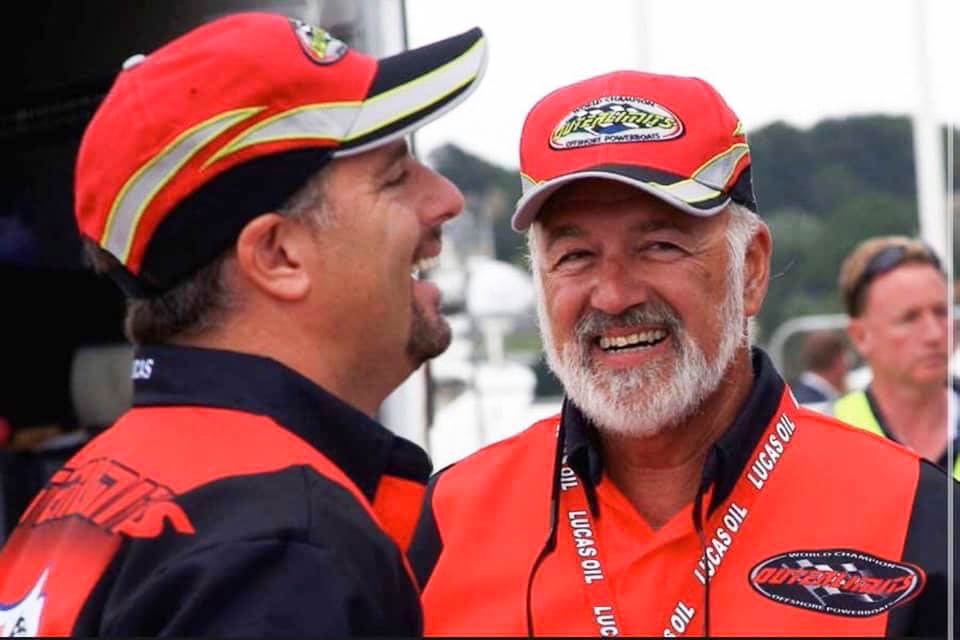 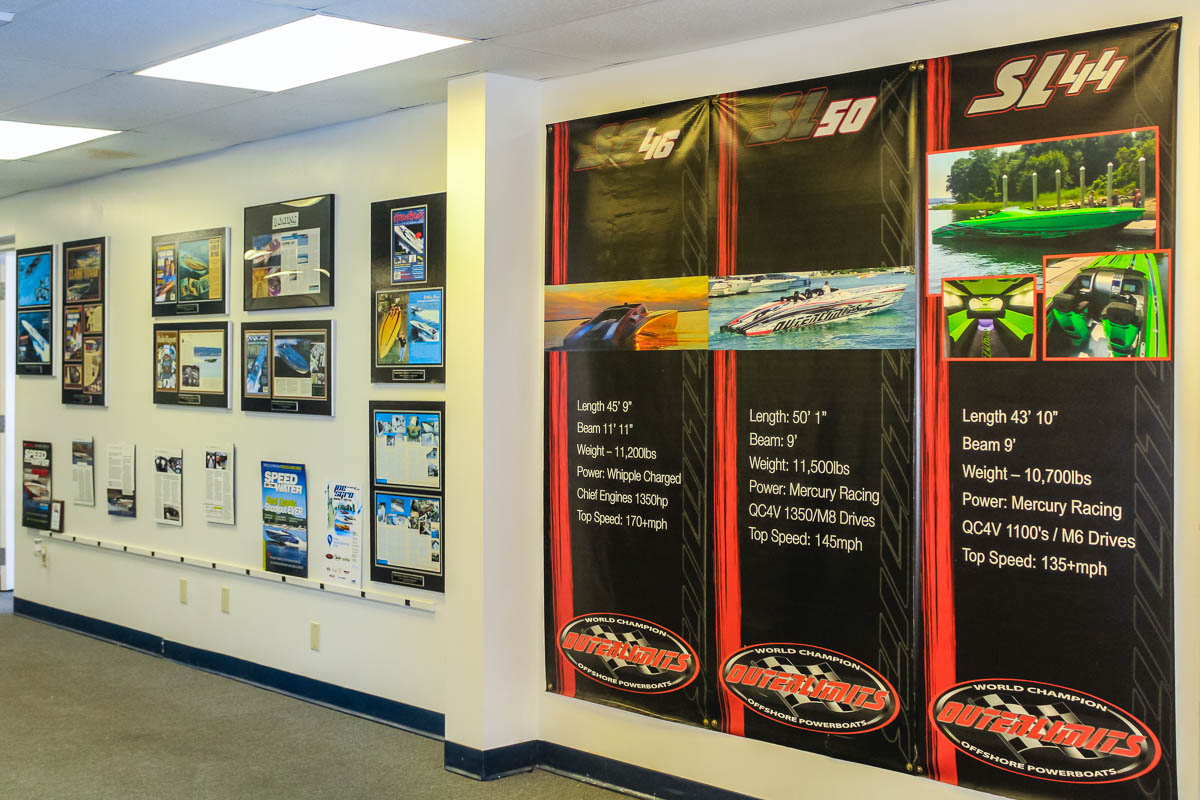 Curtis himself is considered a living legacy and needs no intro, but if he did, these five words would do – world's greatest powerboat racing throttleman. He's been graced with MacGyver-like handling skills, and for thrills has been known to rotate an occasional hull or two (only when racing of course). And even though his decades-deep professional offshore career has kept him primarily in cats, if you know Curtis, the guy will jump in and race anything but a sailboat.

To fully grasp Curtis’s gravitation to Outerlimits and what it means to have his guidance in developing the new models, it's essential to highlight the two racers’ similarities. Curtis and Fiore came from families in the high-performance boating industry, grew up in and out of fast boats, and were propelled by the need for speed. Eventually both matured into respected offshore racers, each at the top of his field – Fiore was the American version on the V-bottom circuit; Curtis was the European version skilled at commanding the twin hulls.

Perhaps Curtis’s "cat calling" was inherited. After all, his dad was Clive Curtis, the powerboat racer and owner of Cougar Marine! At age 21, Curtis became the first and youngest Englishman to nab the Key West Worlds title in 1985. Then tack on another 21 years and Queen Elizabeth II was awarding him the Member of the Order of the British Empire (MBE) distinction on her 80th birthday in 2006.

From the 100-plus race starts the gutsy go-faster has taken, close to 40 were finished with checkered flags. In 2014, the LOTO Shootout Word Speed Record credential was added to his CV after throttling the Spirit of Qatar's 50-foot Mystic Al 'Adaa'am 96 to 244 mph, topping the 2013 record set by Bill Tomlinson's Mystic My Way. Now six years after spanking My Way by 20 mph, Curtis craftily continues doing things His Way which currently includes helping with the roll out of the Outerlimits SC 37 and SV 29. Time to take a look! 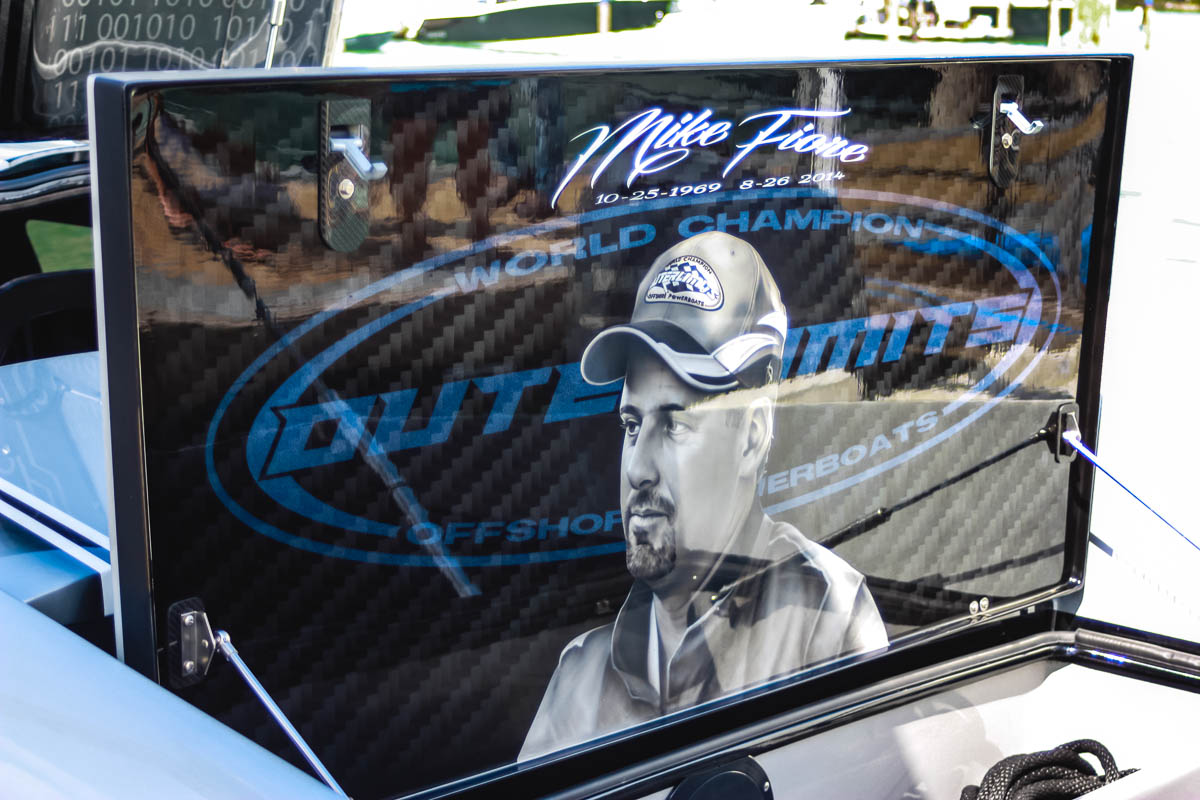 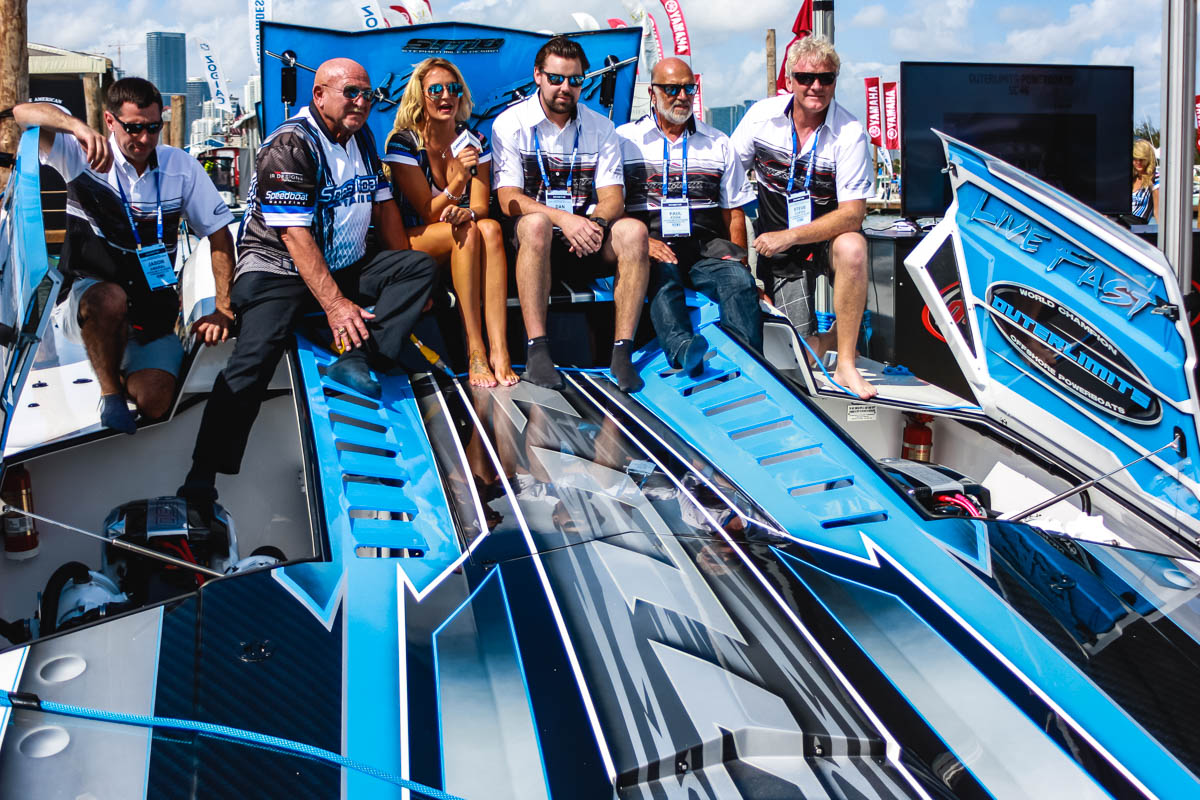 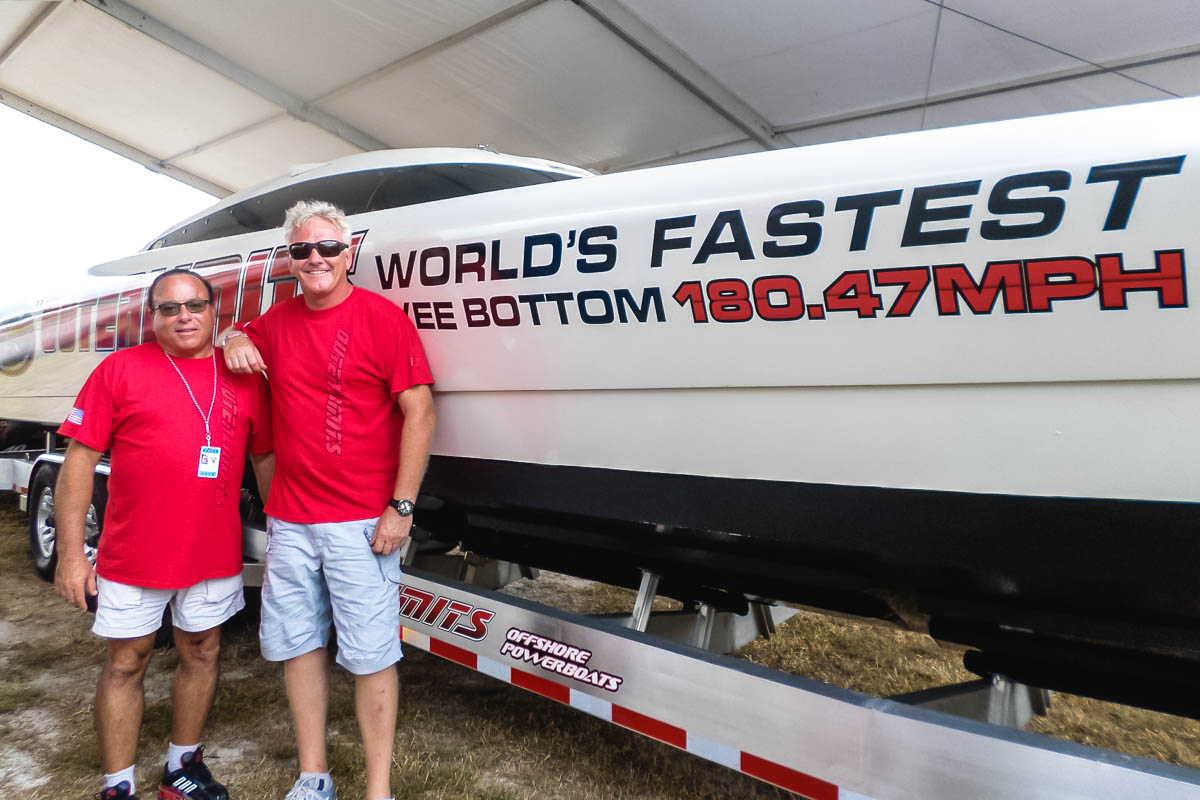 SC 37​
(Update: As of October, I can report headway is being made with hull No. 1 which has since entered the mold as of early September.) The next stage of the process will be stringers, bulkheads and then onto the deck. The goal is to have the SC 37 completed by year's end. It will be easily identifiable from its black and white gelcoat and twin Mercury Racing 450Rs planned for the transom, per the owner's request. Yes, that's right, the first has already been purchased, and the second, and the third, and more than a few others, but I'll keep ya'll guessing on the total number sold. 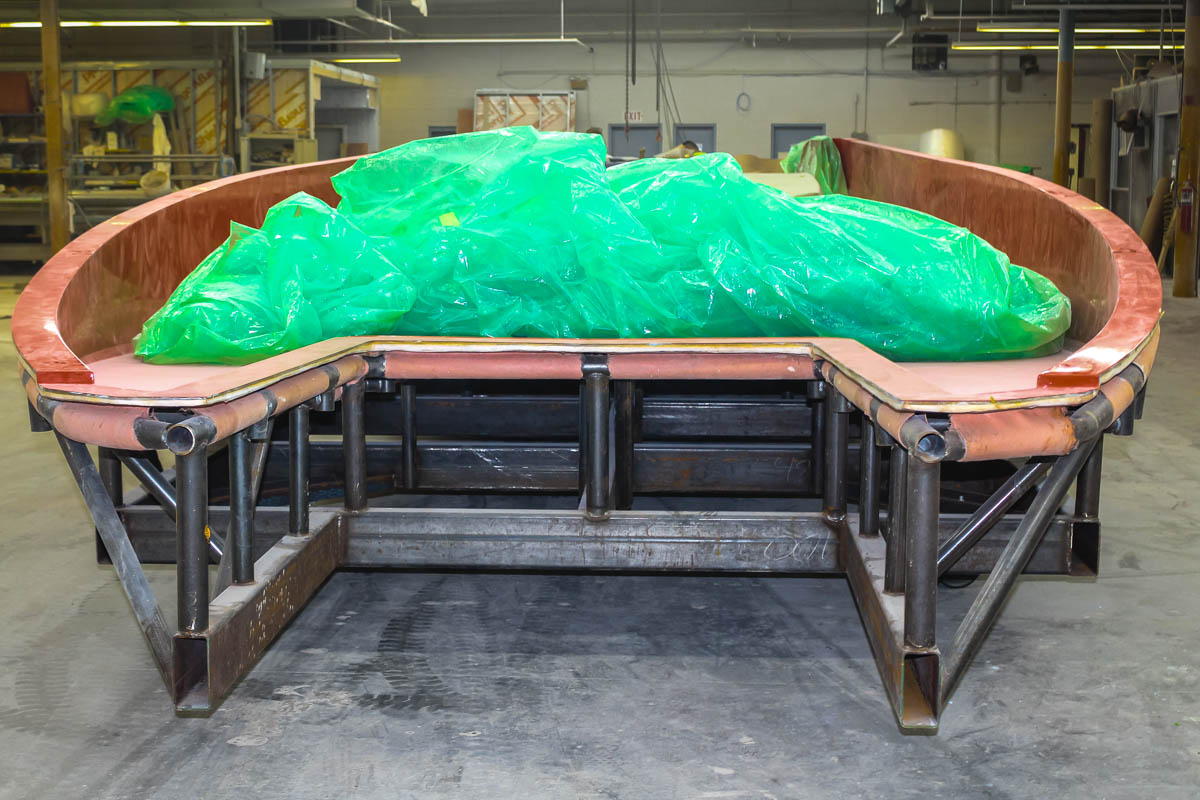 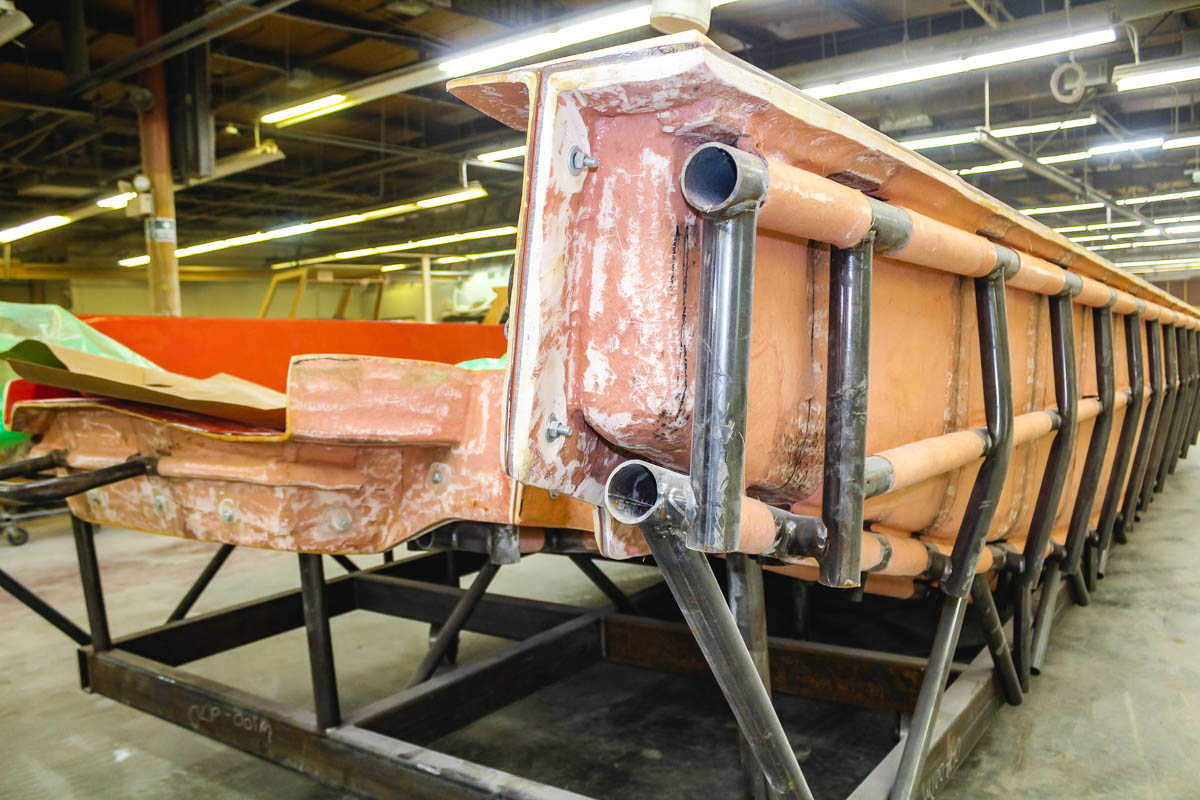 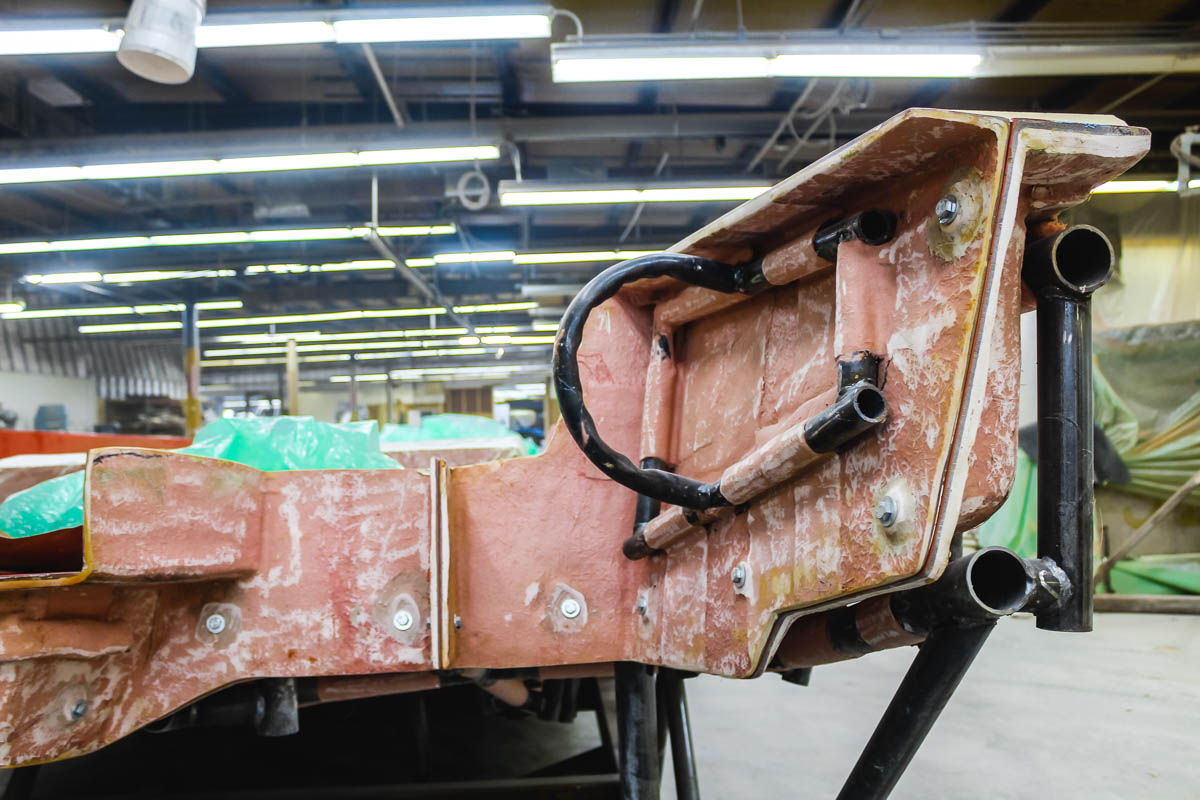 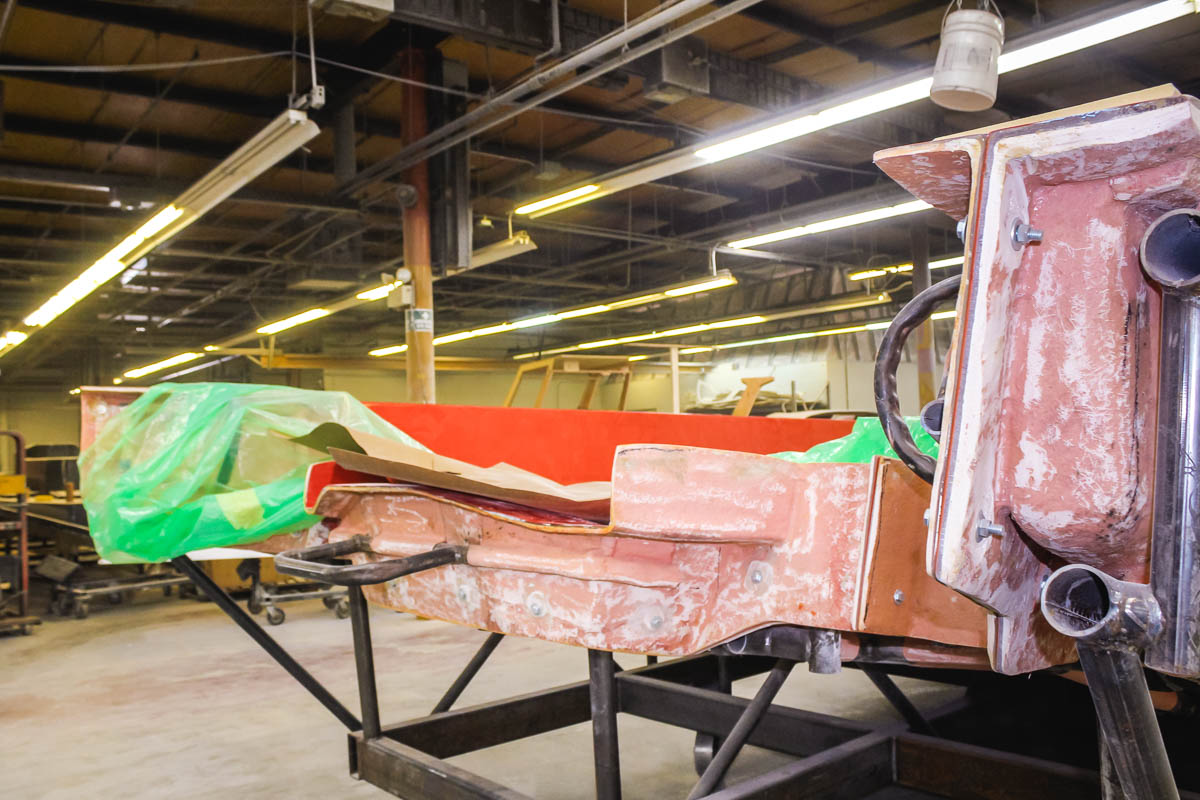 Selling an entirely new boat sight unseen, untested and un-everything-ed is beyond impressive and speaks volumes as to the confidence, credibility and reputation of the established brand. Clearly, reception has exceeded expectations, even with some solid same-segment competition from the M37R Widebody full-tunnel cat recently revealed and receiving raves reviews from California-based DCB Performance Boats.

Curious as to what sets the SC 37 apart? Well let's get physical and begin with a visual, like the one-of-a-kind bustle extending past the outboards which has been incorporated into the back, that might I add... no other manufacturer has achieved. The rear mount, middle swim step and ergonomic attributes running along the rear deck adds lean and clean curves to the SC 37, a characteristic already customary on traditional inboard models with their futuristic design. Even during triple digit fly bys, you just know when it's an Outerlimits charging by!

The size of the SC 37 is another talking point. Kleitz explained, "We didn't want a small boat, our vision was something that could handle big water. Between the cockpit, deck and the sheer height, it needed to be big, strong and powerful. The SC 37 stands out and appears larger than it really is, because in fact it is. The design plan was based on a true 36-foot running surface but the bustle pushes it to 37-1/2 feet, hence the SC 37!" And if big is not what you dig, Outerlimits has also just unleashed its first new outboard-powered SV 29. 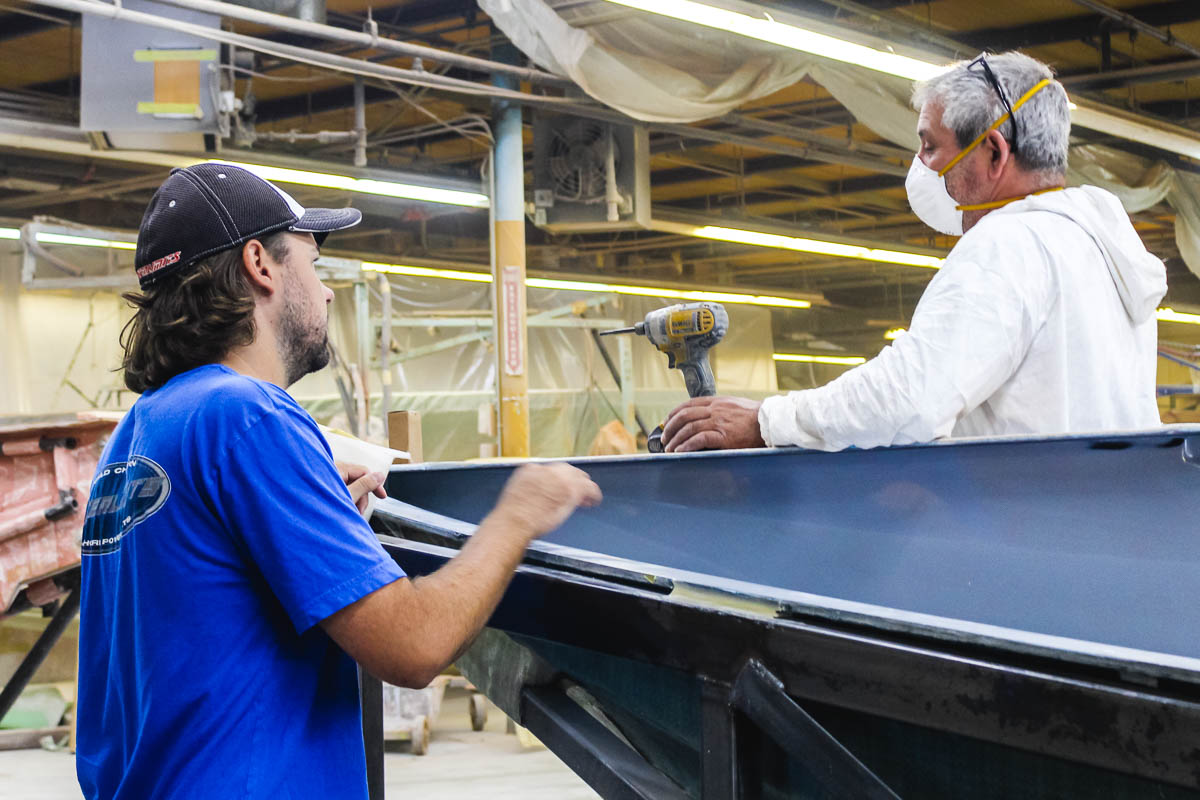 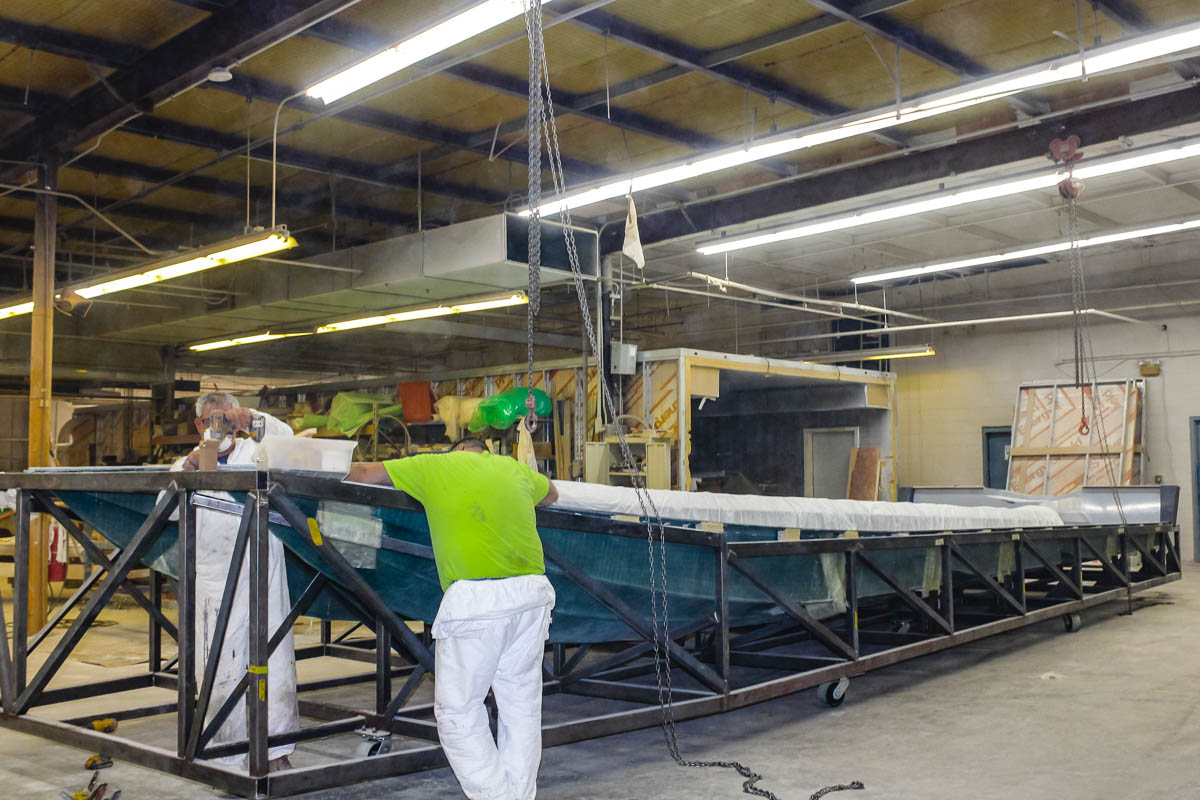 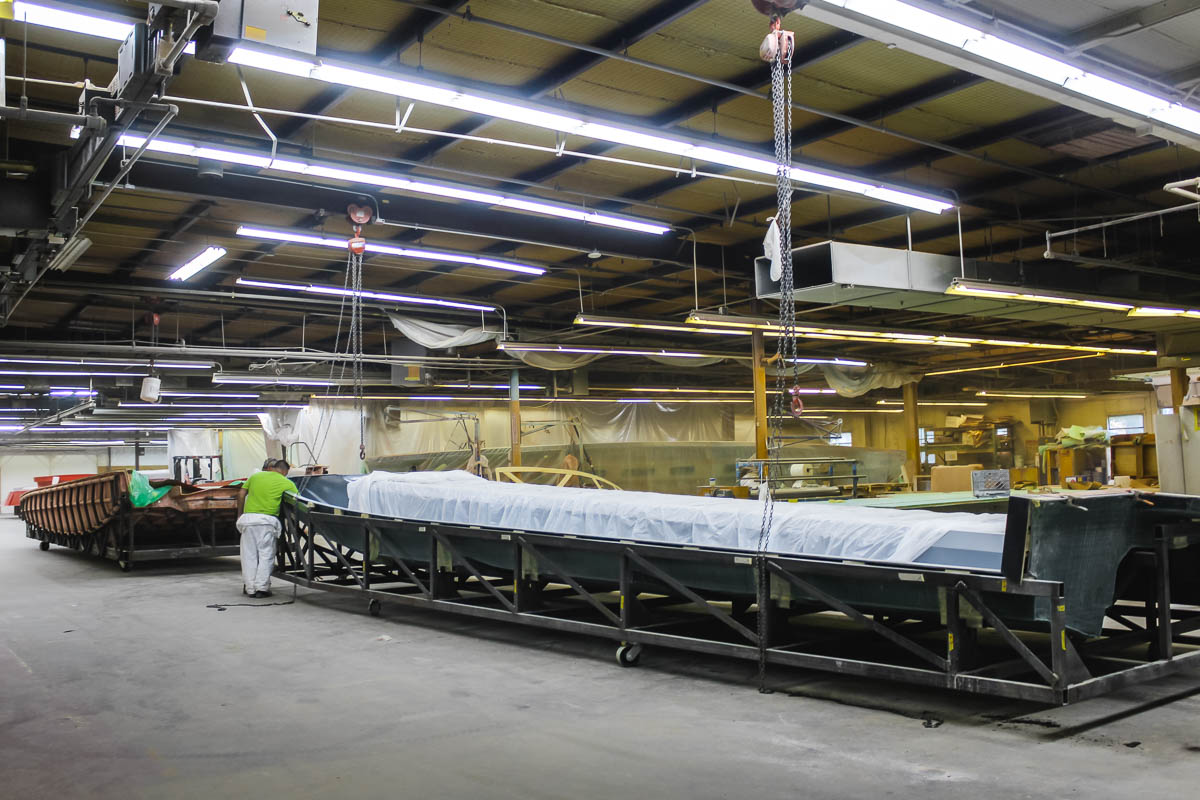 SV 29​
Do you remember the original SV 29? It débuted in 2012 at the Miami International Boat Show, in the glory days when still being held at the easily-accessible Miami Convention Center on South Beach. The SV 29 was powered with a single Mercury Racing 600SCi engine and clearly that was enough for the race-inspired breed. Two months after appearing in Miami "landside on a trailer", the mini-monster left the Lake Havasu poker run in April making another "landslide" but this time it was a runaway victory including top-speed Desert Storm Shootout bragging rights of 102 mph.

From the start, this meant there was big potential to be had for the entry-level, solo engine speedster. Thanks to a price tag near $200,000, the smallest slot in the Outerlimits spectrum soon became the best seller. Production sold out within weeks. Mike Fiore was proud.

So why am I carrying on about a 2012 model eight years down the line. Because it's back! This time the sit-down, V-bottom appears with two Mercury Racing 300-hp outboards. Projected to soar past 90 mph and priced in the ballpark of $315,000… the SV 29 is the answer to your powerboat prayers blessing you with a revered WOT readout and not so feared financial layout.

Touring the factory I was expecting to see the SV 29 in primer, but the Outerlimits in-house paint team already "had at it" with the visual element applications from Stephen Miles Design in Owensboro, KY. Since the majority of other marine marvels inside the shop were in plug and mold mode, the red, black and gray 29-footer stood out in the crowd with its signature graphics based off the championship Marker 17 Marine color palette.

The SV 29 is a mini-rocket and geared for the pilot who seeks the following threebies: a turn-key watercraft; engines with a multi-year-warranty; and an all-around cool performance boat to dangle the outboard darlings off of. Seeing that not everybody's new nautical normal is a center console, nor are we all anglers who love reelin' them in… some boaters are just looking to "seas the day" and have a good time out on the water, and in the SV 29 you can do just that! 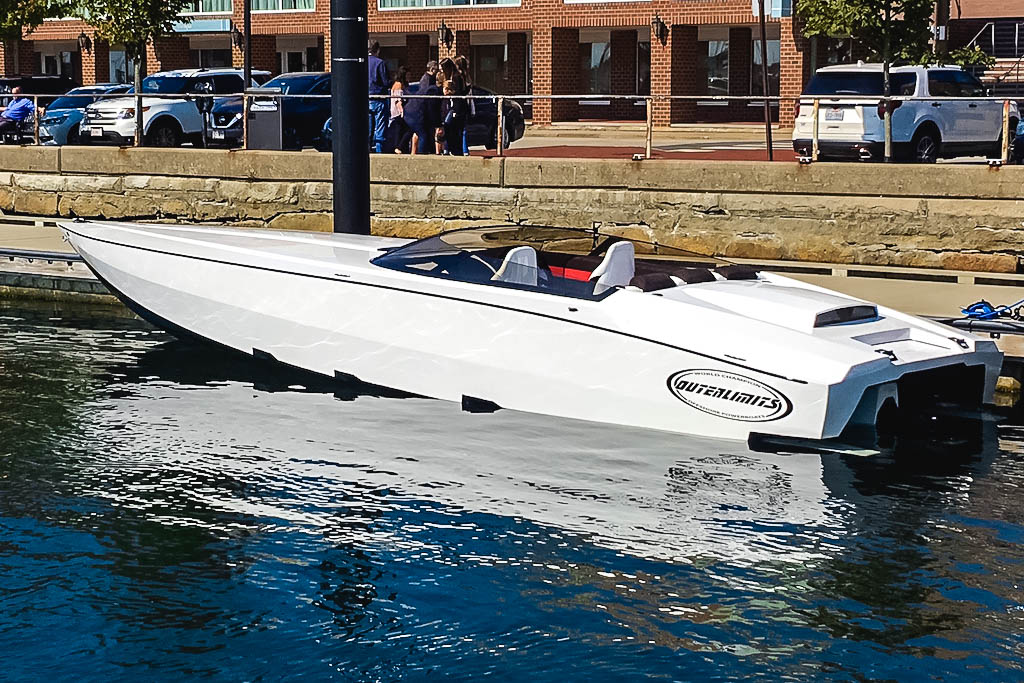 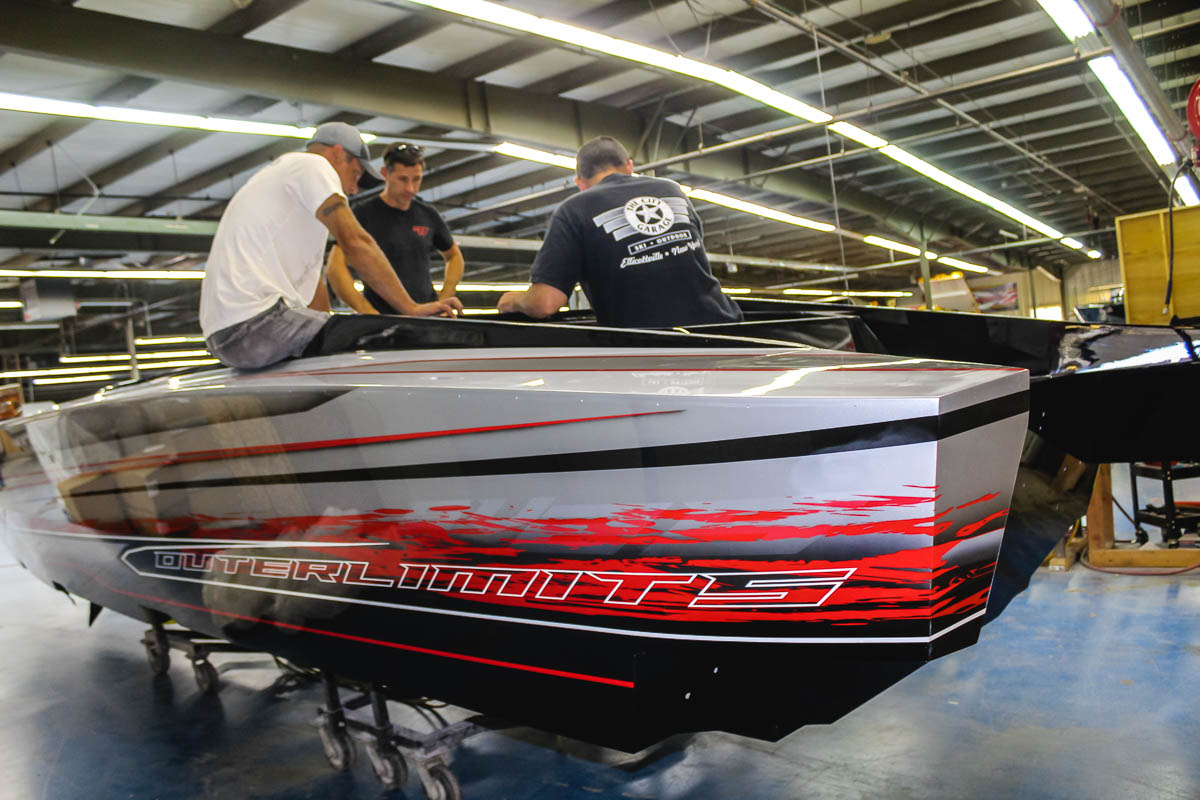 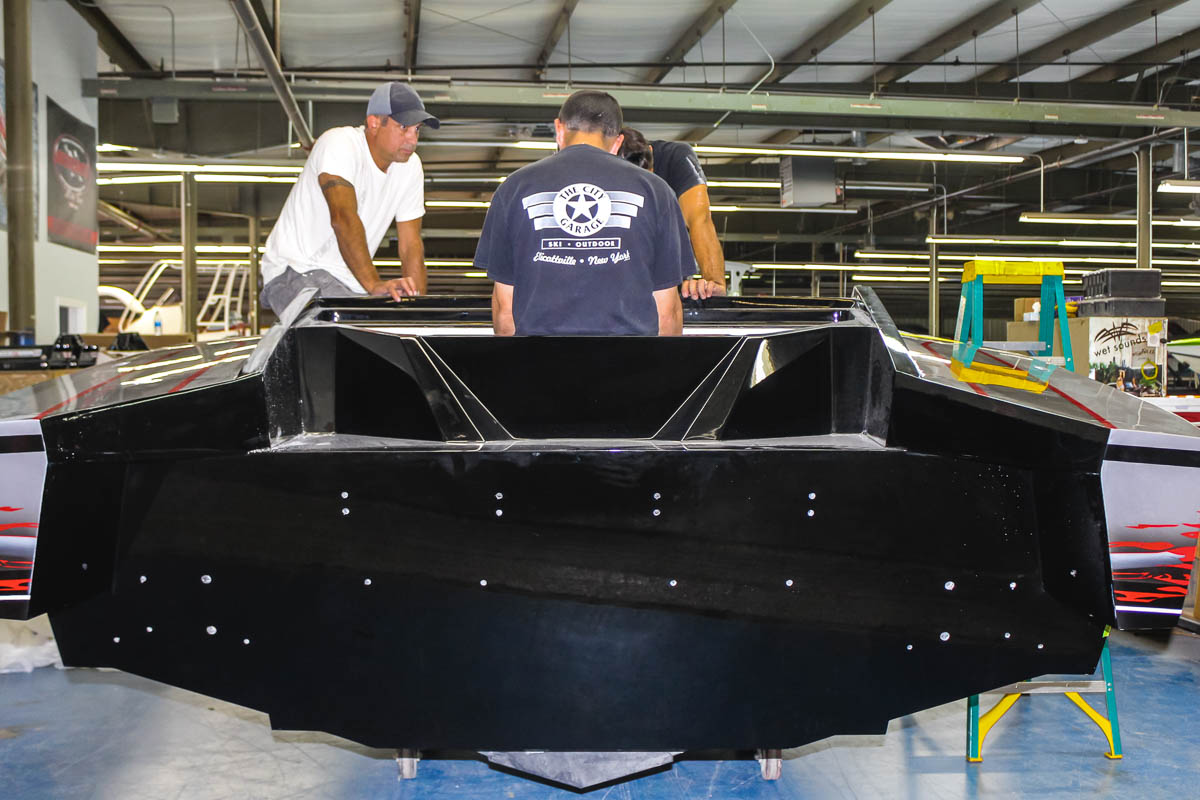 Clearly after cranking out four new models in 2020, Outerlimits has arrived to the outboard engine powerboat party. As they say… it's more fashionable to show up late anyway! As progress advances on the models, I will do an update. But until then, I leave you with a few shots of what is unseen territory for most, since Kleitz was kind enough to allow me some bonding time in the other areas where the eye-candy inboard inventory is housed for brokerage services, maintenance and repairs. Notice the oven room and the classic 1996 37'Stalker! 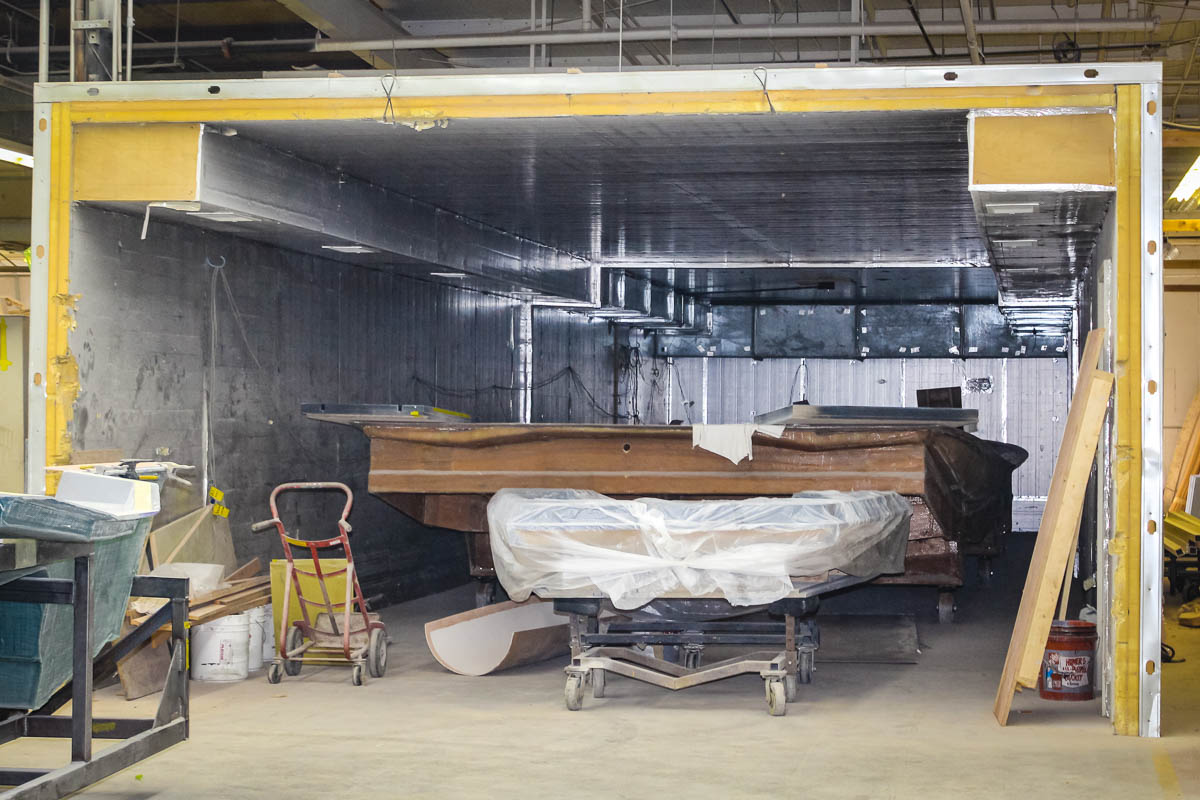 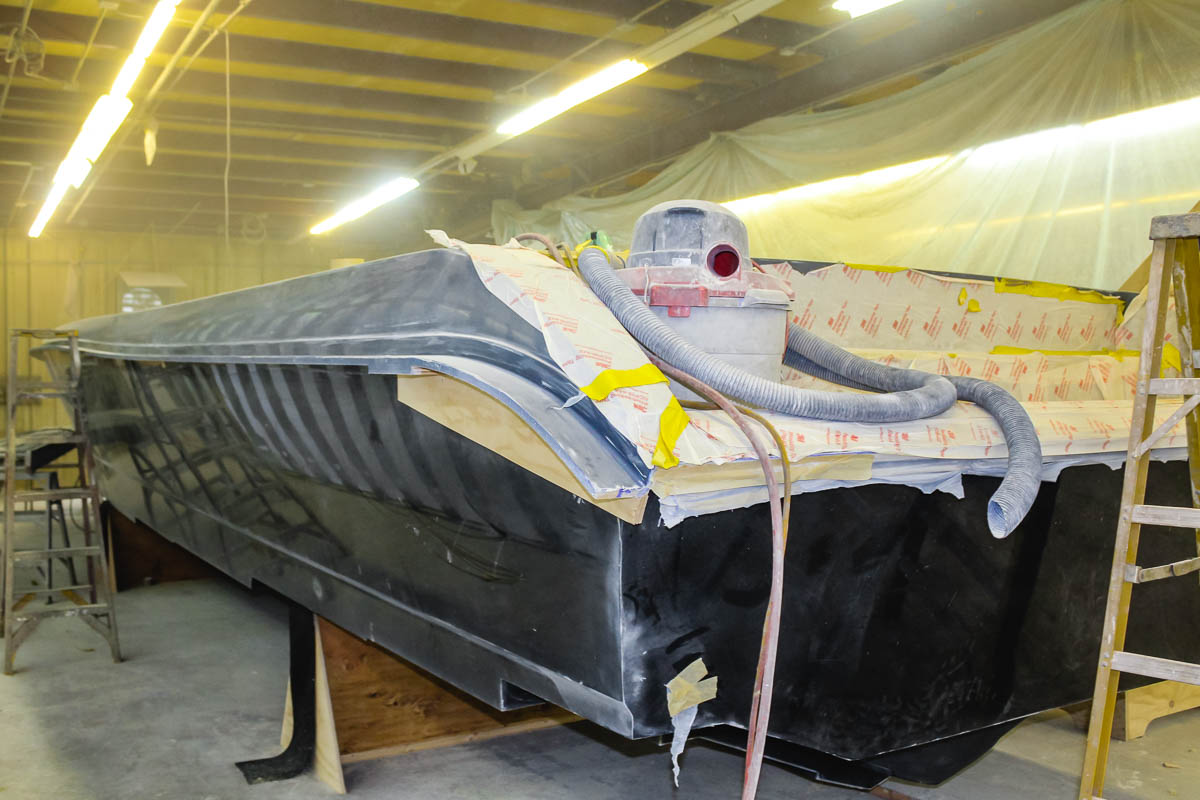 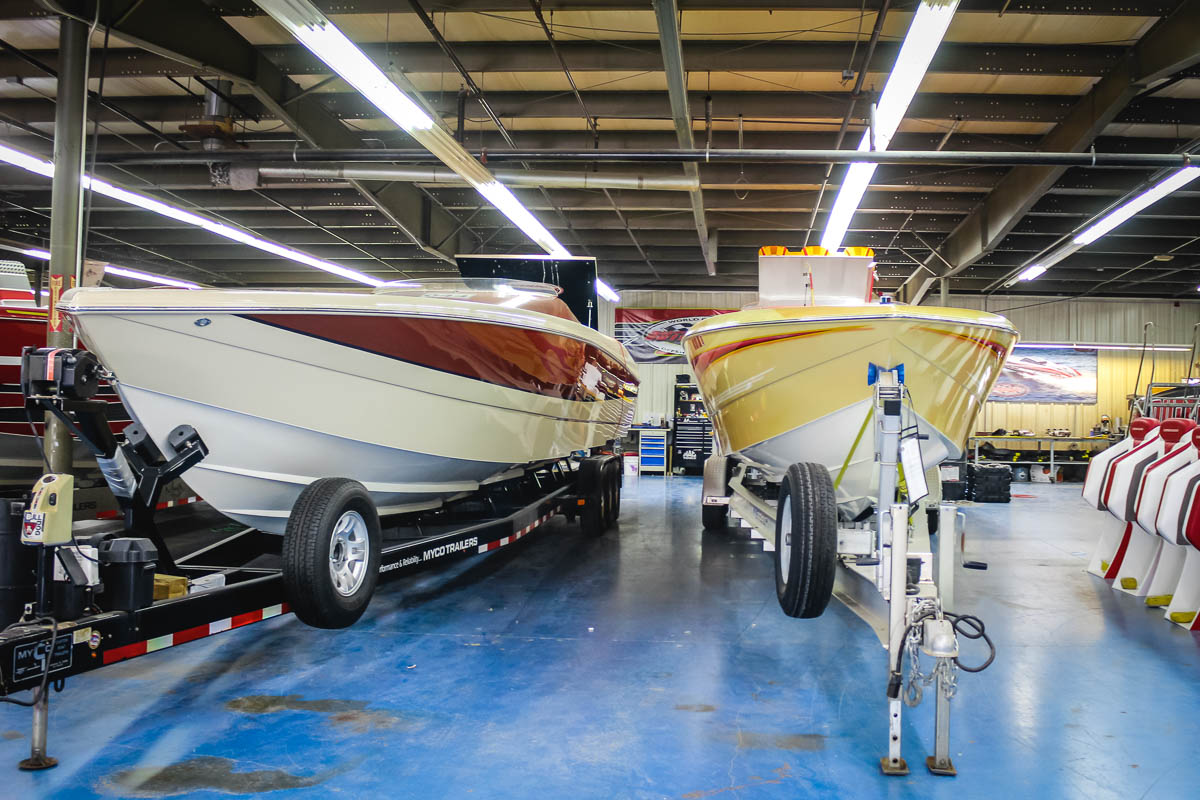 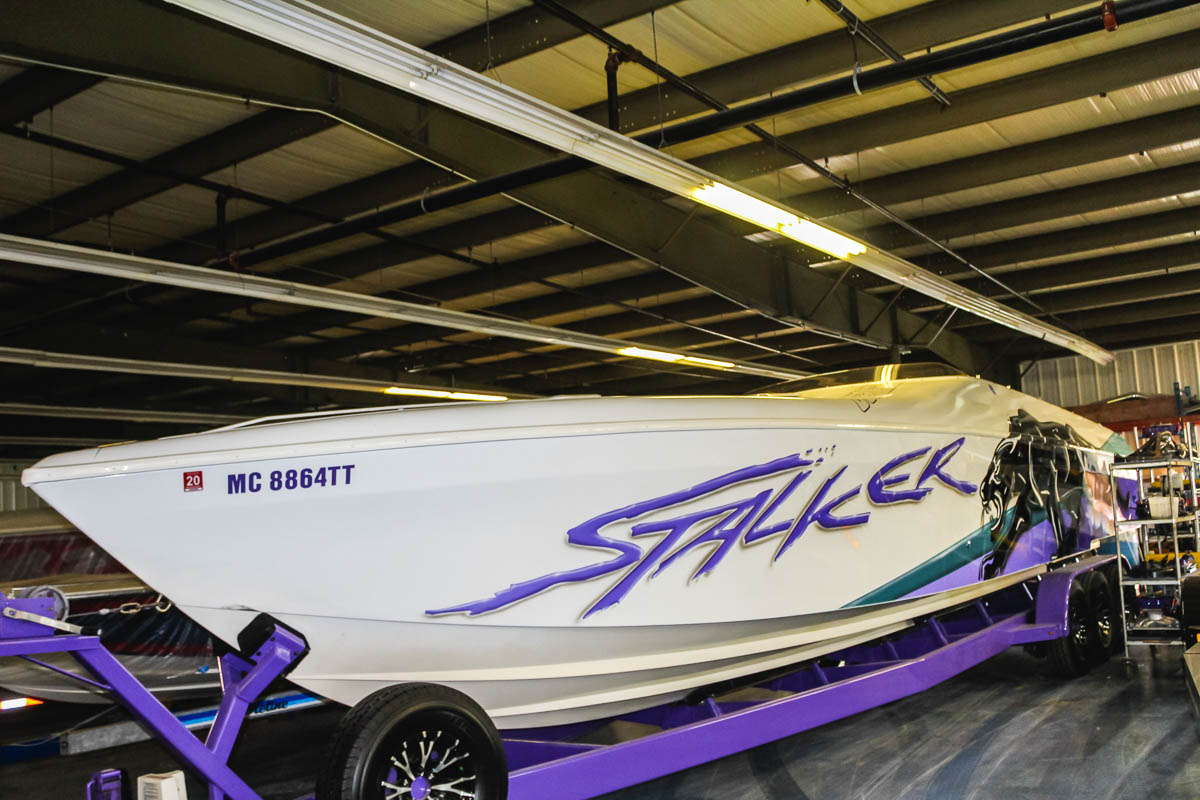