The Jaguar Marine J43 - A Fresh Twist on a Classic Animal

One thing is for certain if electing the electrifying Miami International Boat Show's high-profile, high-performance dock as a launch pad to let loose a new breed of boat -- IT'S GONNA GET NOTICED! The prime stretch of absurdly-packed space with more people passing through than NYC's Grand Central Station on New Year's Eve, is overflowing with deep-open-pocketed powerboat connoisseurs from the spectacle's start to finish... and for Jaguar Powerboats, it was time for its new kid on the block -- the Jaguar Marine J43 -- to rock the dock! 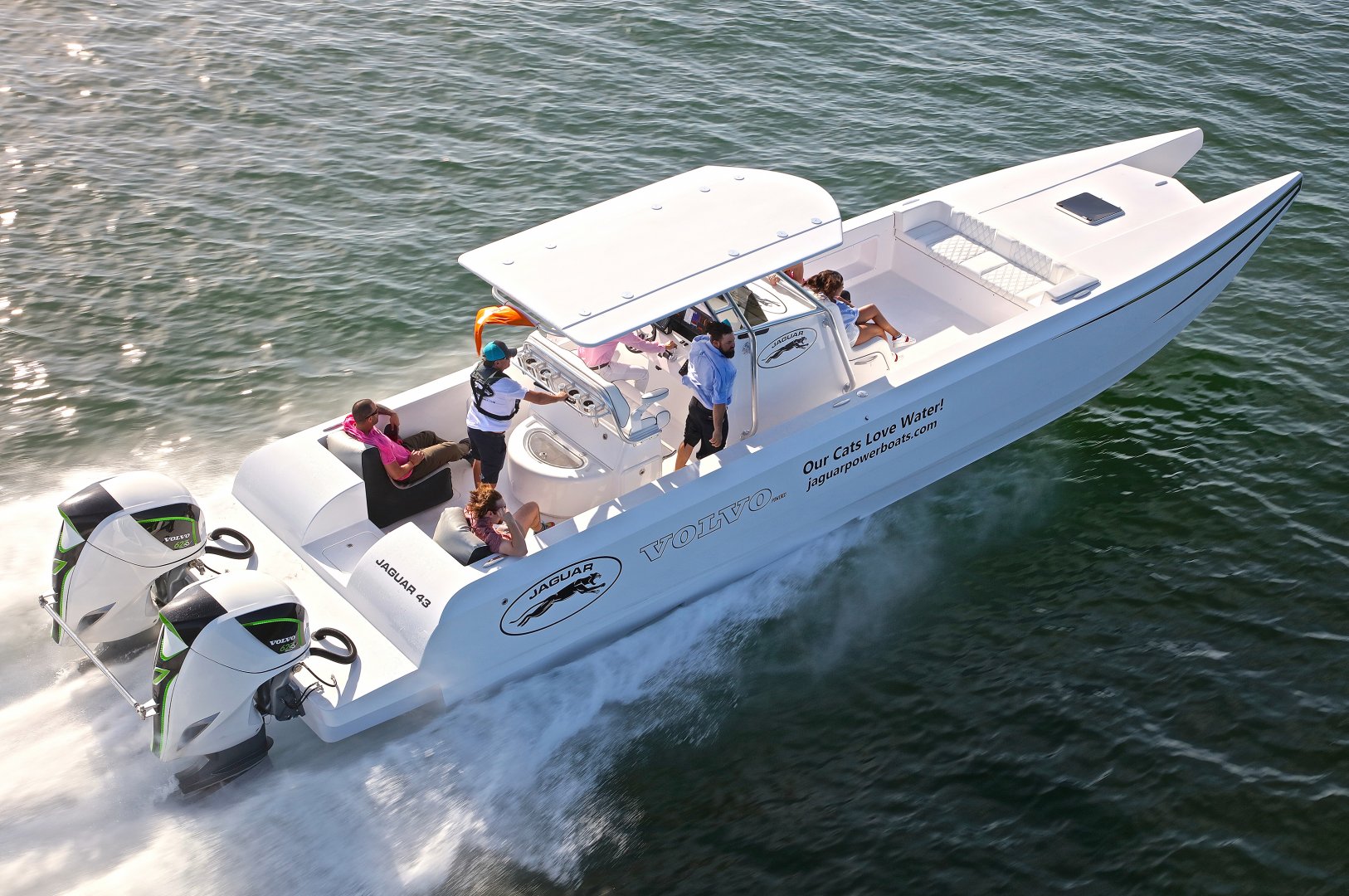 Famed for its classic offshore crafts and racing contributions, midway down the mooring on Thursday, February 13, 2020, the manufacturer released its ferociously-fresh Jaguar Marine J43. Calendar-wise, more than 12 pages were flipped since dedicated builders at the High Point, North Carolina-based factory began the mission to produce the perfect powerboat fabricated and fit for the regular guy; and not the die-hard racer of days past. 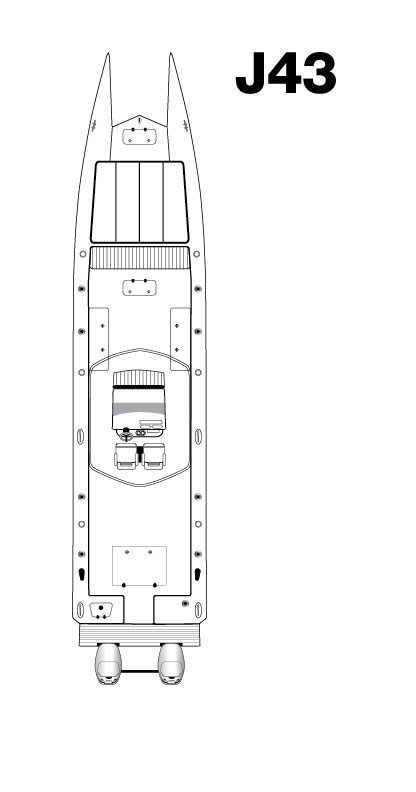 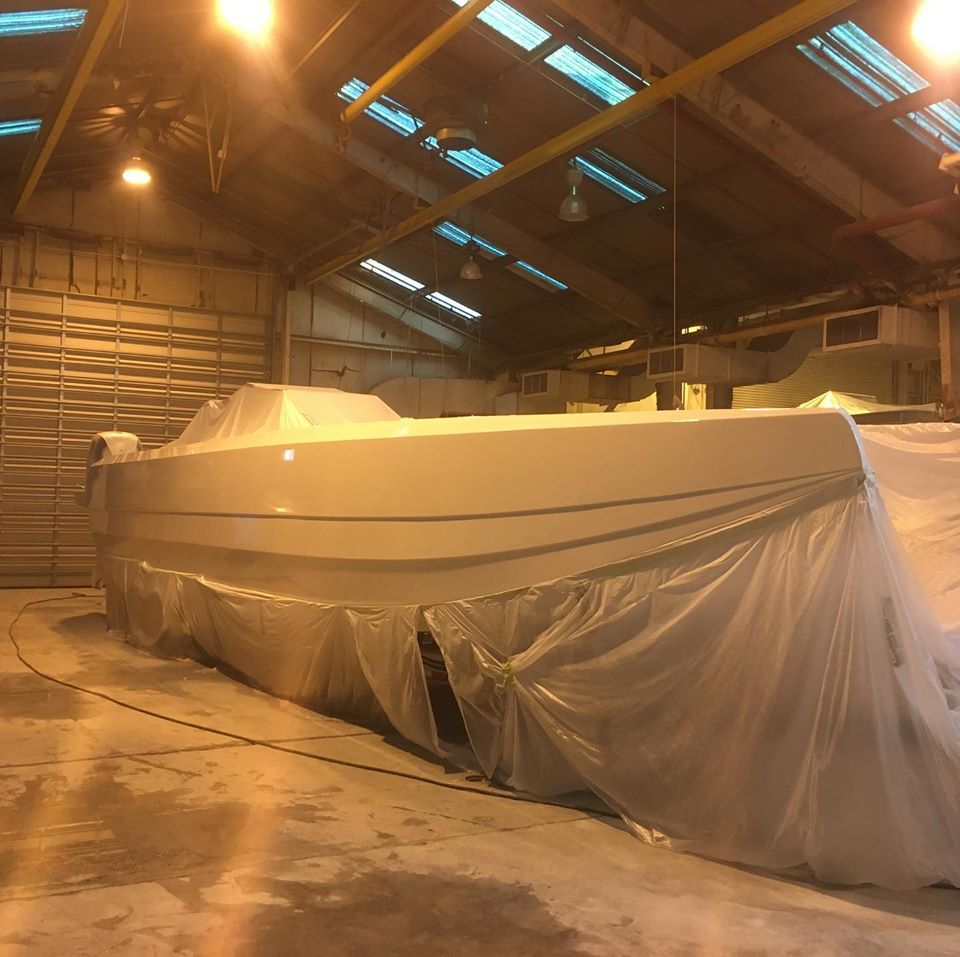 Hull No. 1 checking in at 4,300 pounds and stretching 43 feet in length threw fenders out calling slip 327 home for the five-day seafaring affair... but was often out of the house each time I made my rounds down Dock 3. Where was the frenzied animal? Busy unleashing savage smiles on the faces of those who boarded for demos to experience that booming acceleration and commanding carves into the turns during their Banshee-like blasts across Biscayne Bay.

Hearing riders rave reviews as to the responsiveness and stability didn't surprise me in the slightest. Given my obsession with the old-school stuff, I knew the background behind the brand and imagined the J43 would be doused in race DNA. One must simply look to Jaguar Powerboat's founder to understand my last comment, and more importantly to appreciate the hydrodynamics of the new model. If you don't know Jack Clarke, the gent who took the speedboat world by storm with his racing and rigging -- you're about to! 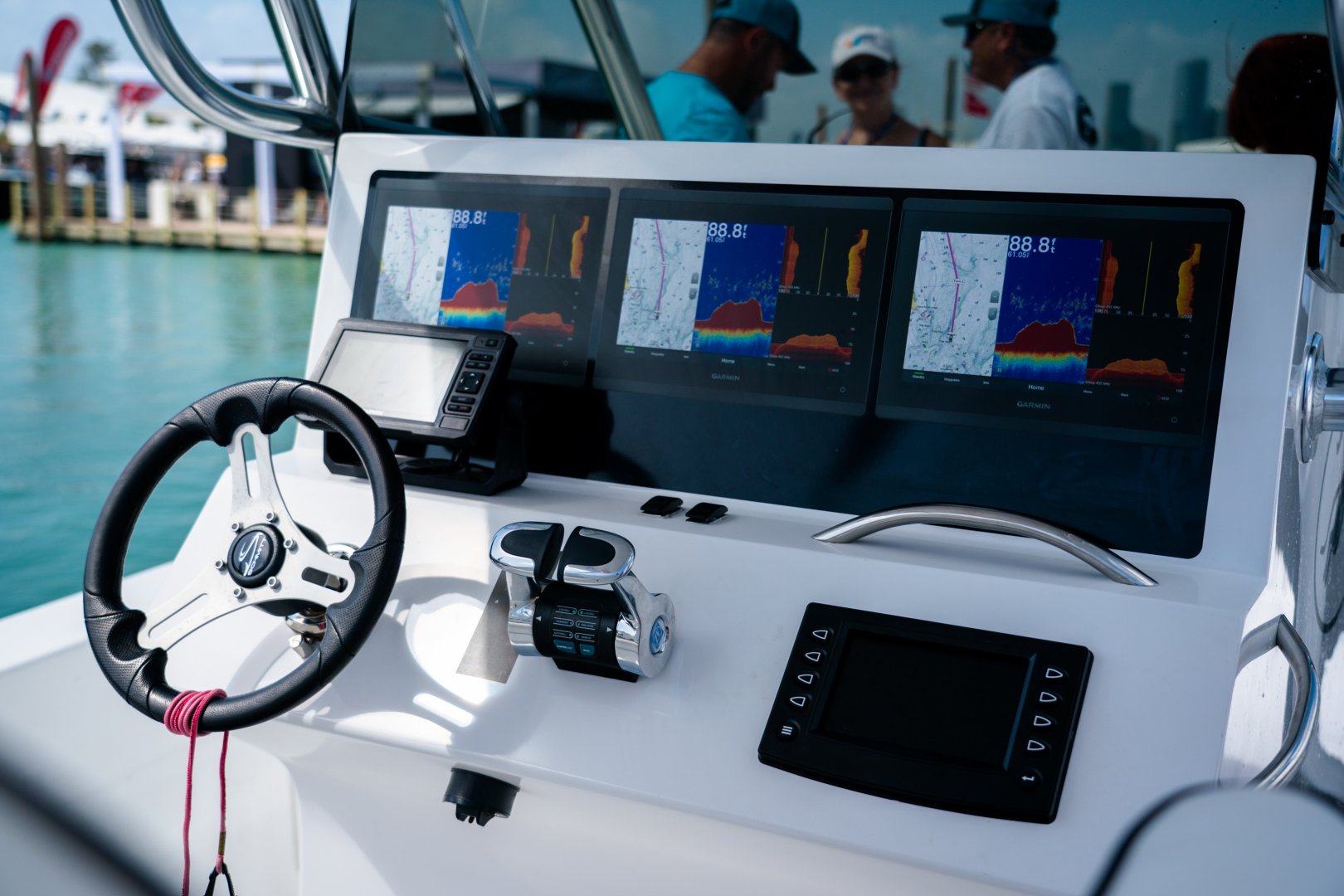 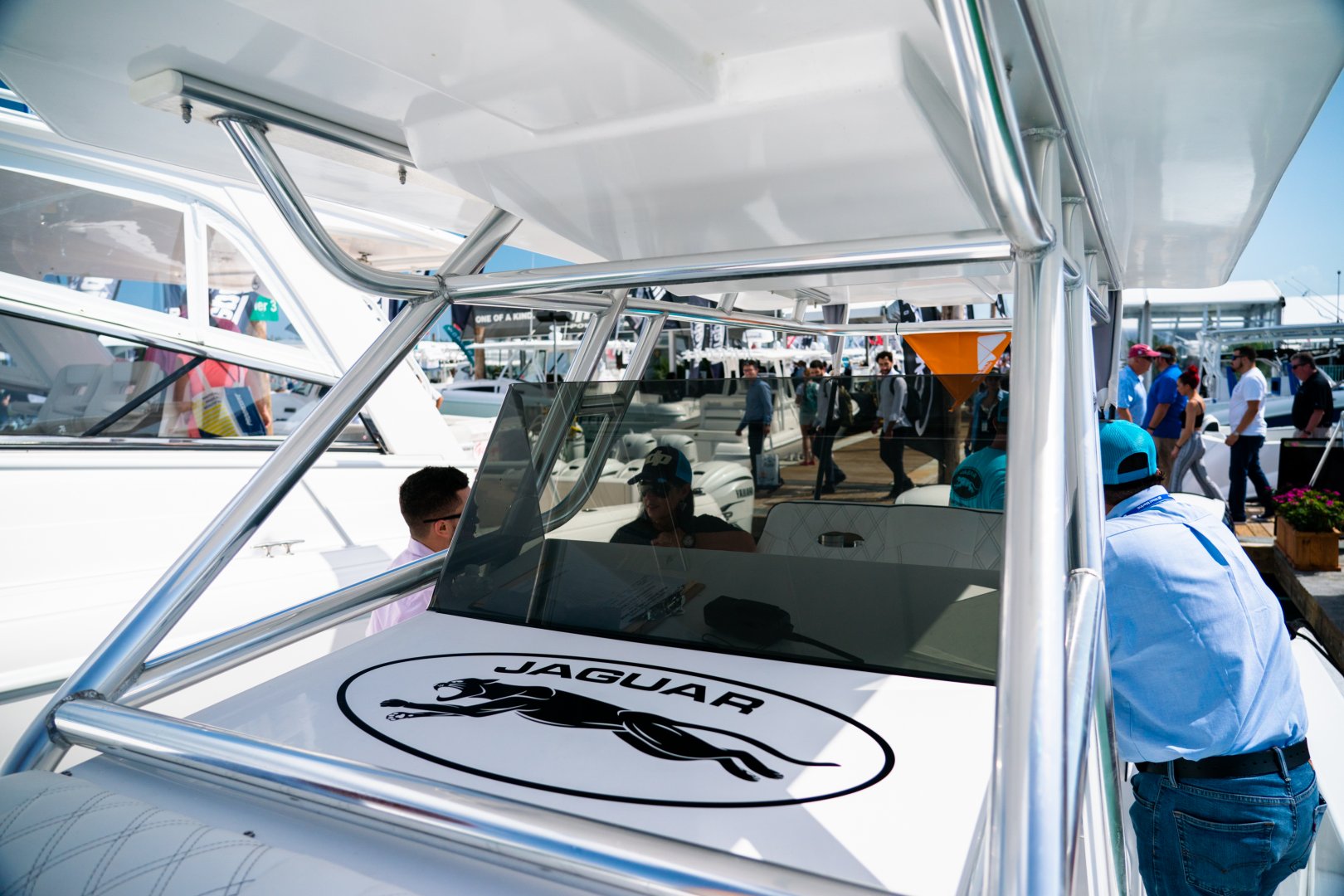 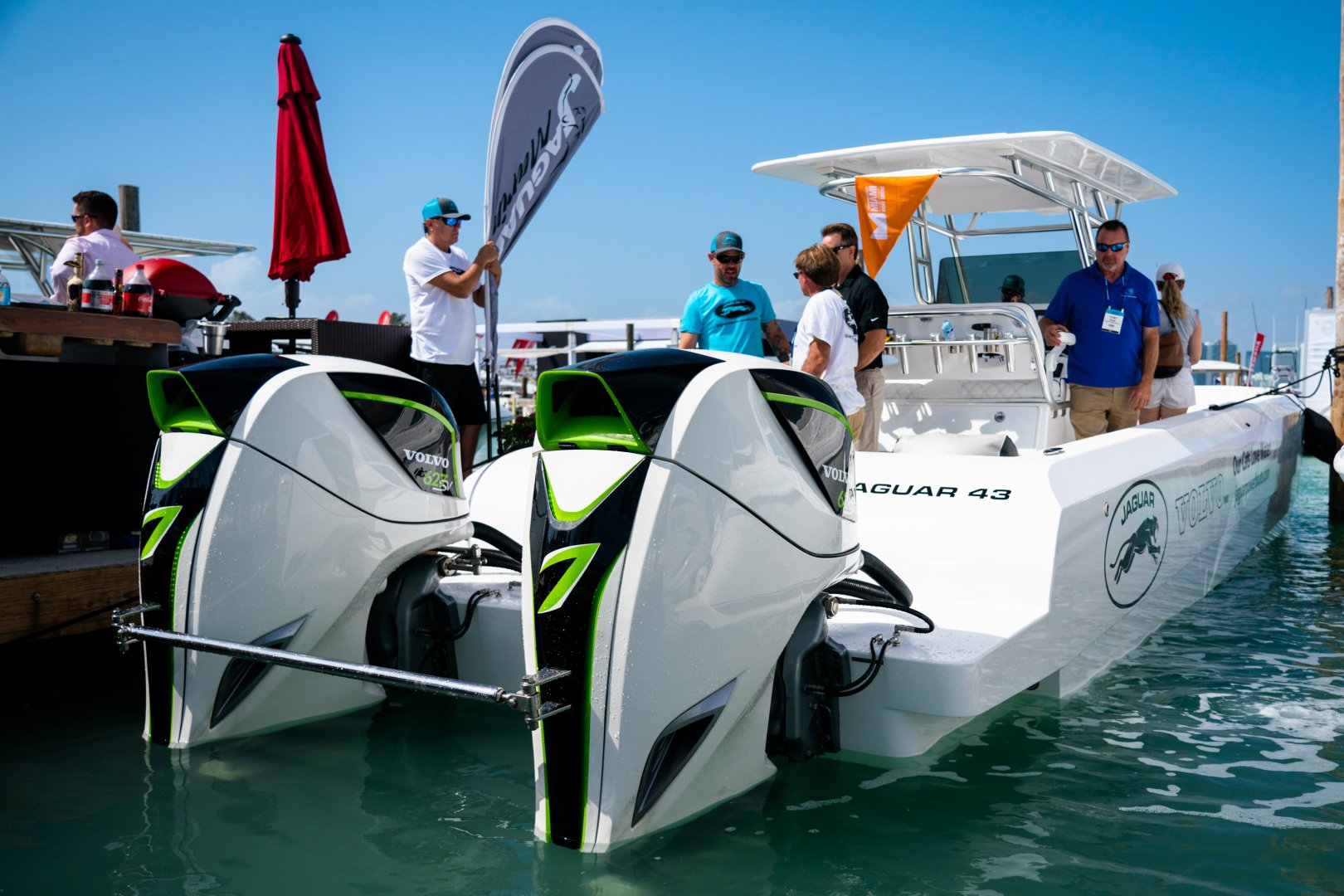 His saga started in 1984 first climbing into a Pro-Stock Chris Craft catamaran, and later climbing onto the stage accepting the rookie of the year title. Switching it up the second year, Clarke arrived to the milling area of the Open Class catching the people's fancy in his own 35-foot wooden Jaguar tunnel hull, yet as time ticked on it became apparent the wooden wavecrusher was not going to survive in the long run. This forced Clarke back to the drawing board for a full year. 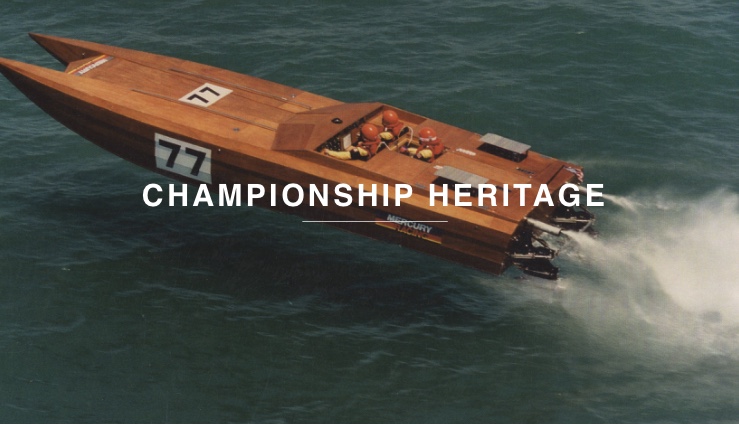 Resurfacing on the legendary Key West course in1987 in the catamaran Thriller, while at the same time living up to the name of the new 35-footer... Clarke gave everyone chills as they witnessed the cat's corkscrew flip and engine hatch disappearing trick initiated by an un-invited mechanical monster. Even more outrageous than the waternastics during the race, the structurally sound twin hull righted itself and pushed forward to a valiant third place finish. That season, Clarke collected offshore designer of the year and tunnel boat manufacturer of the year accolades. 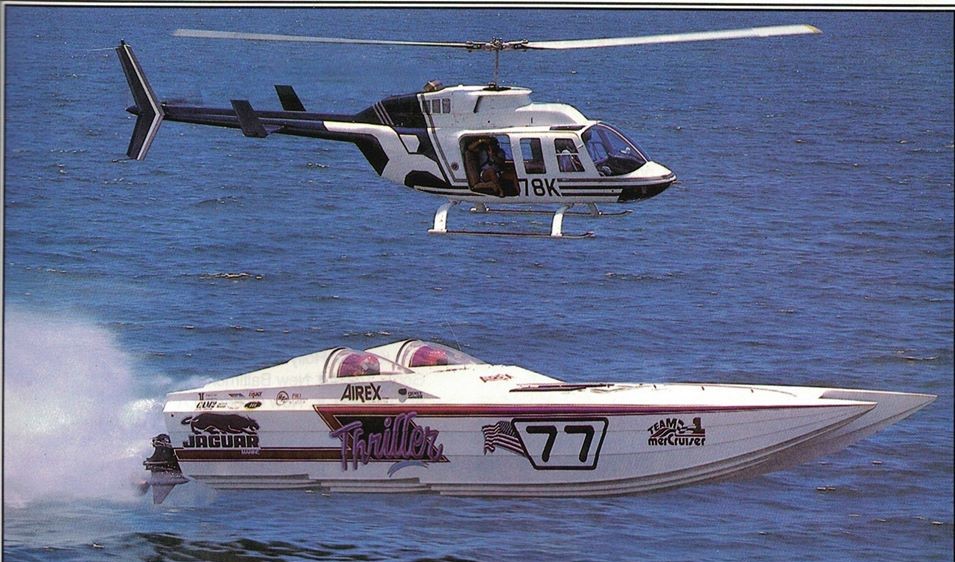 Changes in 1988 put gifted, go-fast guru and president of Cigarette Racing Team, Craig Barrie inside where the magic happens next to Clarke, and by a stroke of the brush, outside the cockpit Thriller morphed into Coors Light Silver Bullet. Record breaking and boat making continued shaping the times with notable comrades commissioning Jaguars including: brigadier John D'Elia who emerged in Special Edition, one of the most winningest (real word) water warriors to date; as well as, revered racer Stuart Hayim in Recovery known for having captured the "fastest time ever recorded" following his quick zip around Long Island Sound. 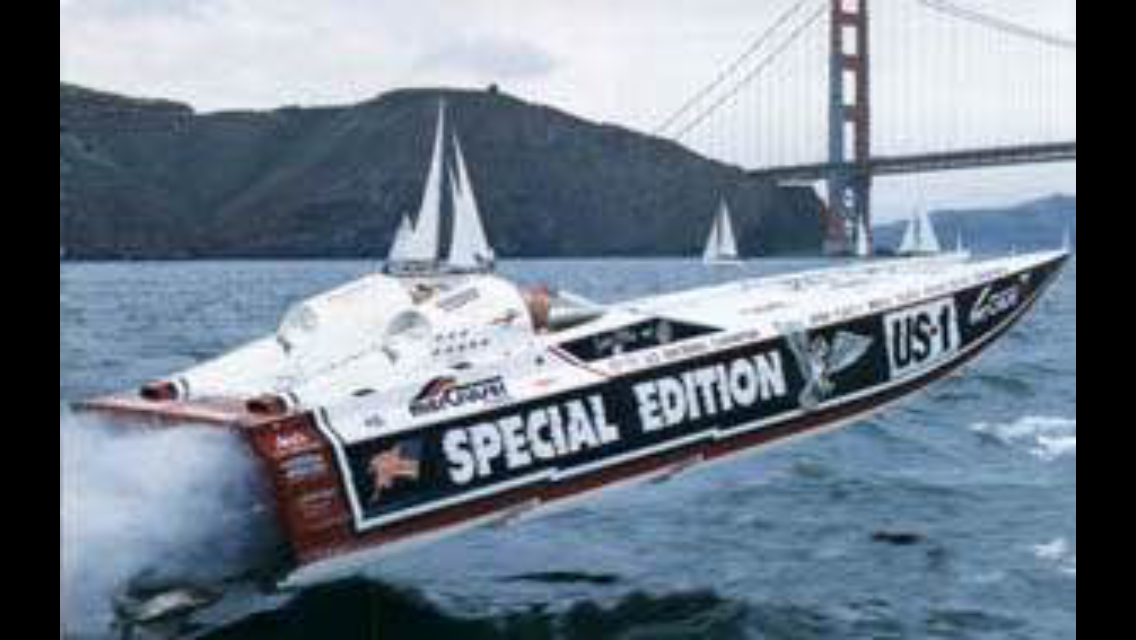 In 1990, Clarke opened the next decade seizing the APBA national championship this time under the Ferrari moniker, and as his fame continued expanding, so did the Jaguar frame. The first jumbo out of the mold was the mythical Insatiable -- a 46-footer with quad 1,000 hp diesels dropped in under the hatch for Barry Roth. Insatiable gained an even bigger brother when Dan Campbell's wide body 11'11" beam 50' red-stripped Coca Cola began its tenure stirring up the seas in 1995. One particularly effervescent Coca Cola shake up was the day it shattered the 183 mph world speed record.

On a roll (literally) in the boats and bringing home the victories, even the sportsman of the year honor was bestowed upon Clarke after suffering a barrel roll the first day of a New Orleans scrimmage, before he returned to the solidly-crafted aquatic feline ready to rock the waves on race day two. Rock-n-rollin' took on deeper meaning in 1993 when Motley Crew main man Vince Neil "kickstart his heart" next to Clarke in the original Thriller-turned-Toshiba, all the way to the world champs. 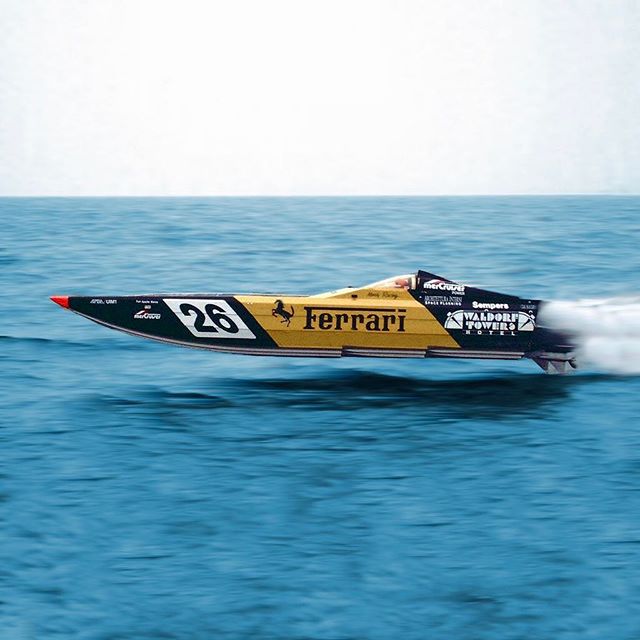 After Vince, the next star to hop behind the helm was someone Clarke knew well. His son John who had been by his side all the while, was now of age to jump on board sharing the cockpit and the podium next to his dad, picking up the family-earned national championship trophy... this time in a 40' Jaguar.

Moving into the new millennium, Clarke and son John backed off the throttles and migrated into the pleasure boat building segment of the sea world. Their first breakout in the series was a 35' six seat full cabin, before changing direction with heavily customizable sport fishing boats. Following a string of successes, six years ago Clarke decided to step out of the spotlight and put John at the forefront in the president's seat to run the show. And that brings us back to the Miami Show to check out John and company's latest and greatest in the Jaguar Marine collection. 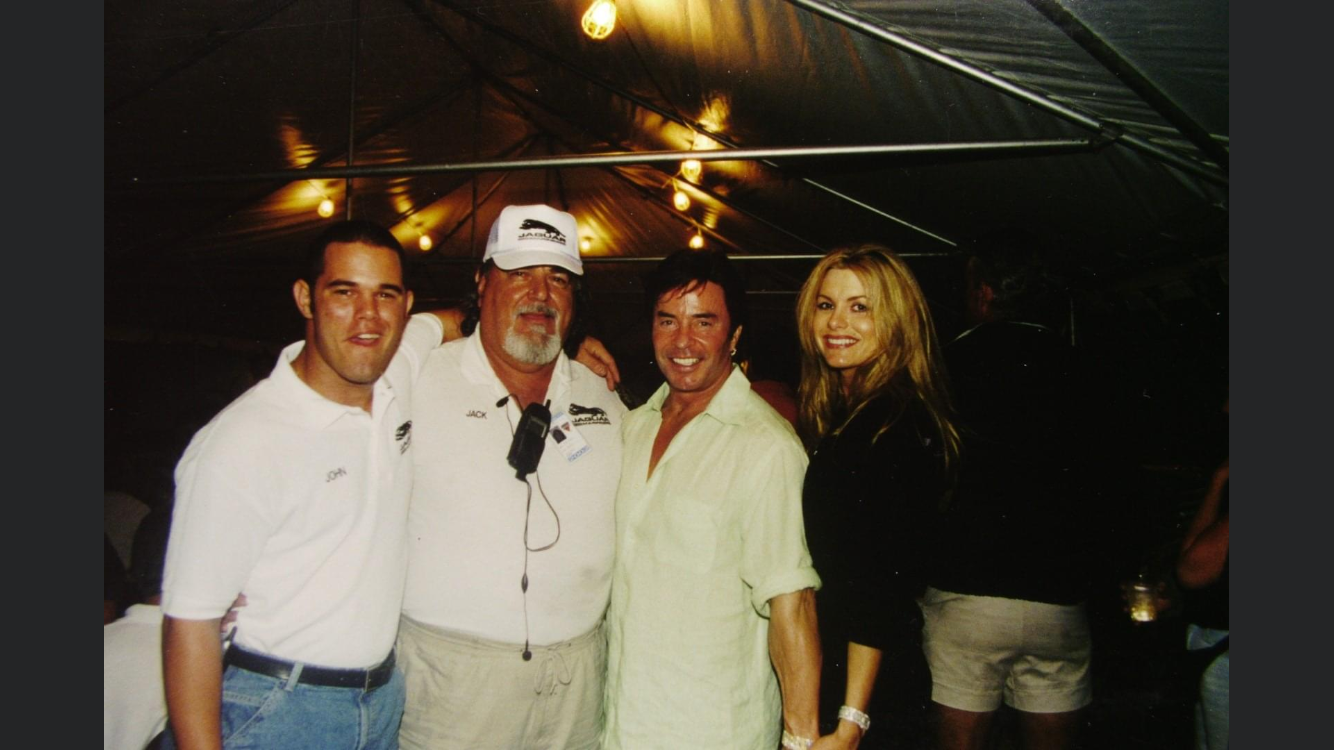 A New Animal in the Mix​

With the Jaguar Marine J43 finally back at the pier, it was time to politely (in my eyes) barge through the curious herds clustered around. For once, I was happy to be 5 feet 2 inches and wiggle my way to the front where John and CEO Victor Betancourt welcomed me on board -- shoes and all. 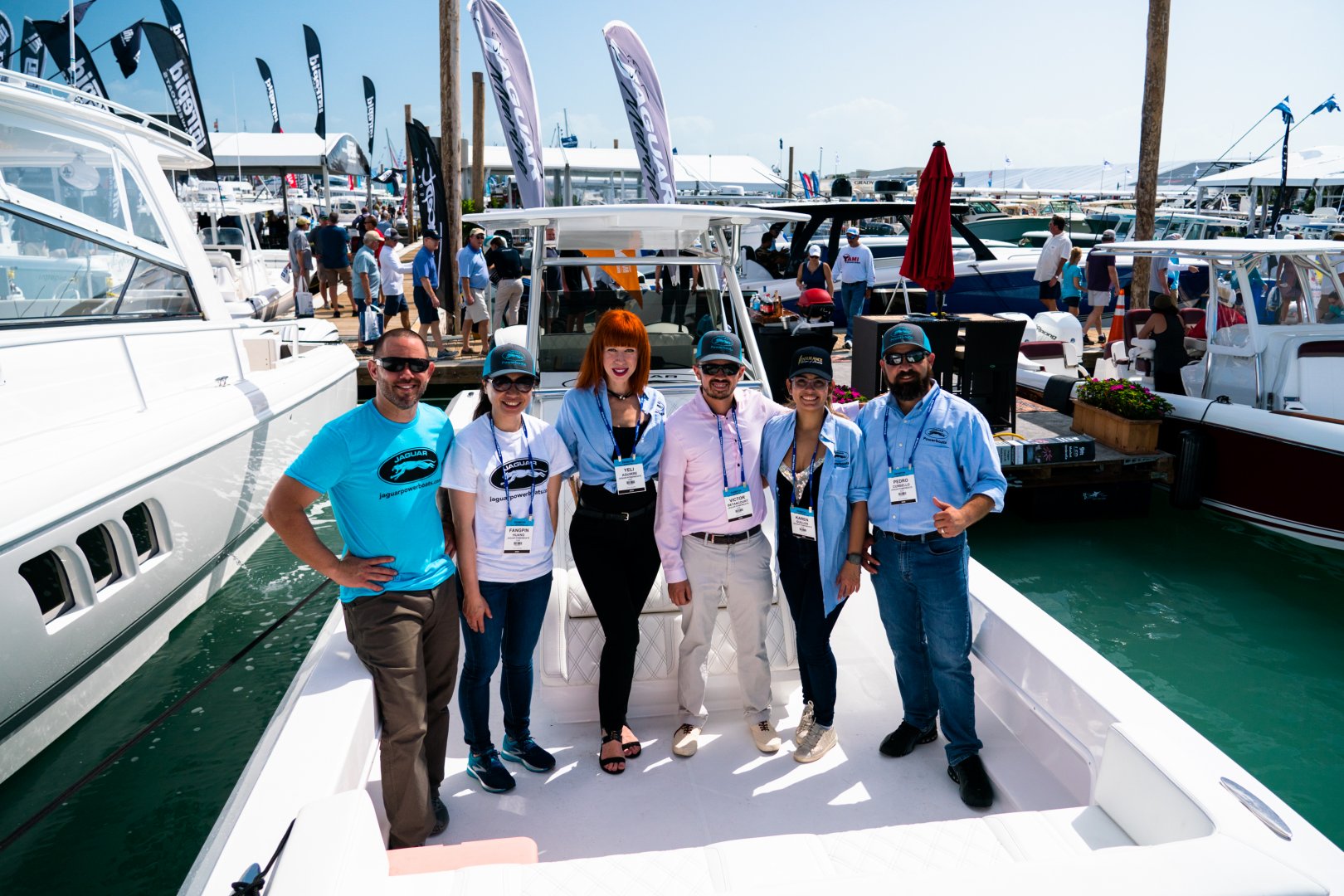 Pre-game reading up on 43-footer led me to wonder how to classify it? After seeing it up close, I answered my own question... it ticked all the boxes! It's a powerboat. It's a catamaran. It's a center console. And, it's fisherman friendly if the owner wants. But in reality these serve as disguises. The underlying design and construction of this baby screams raceboat; and that my friends was the point of the mini racing lesson 101 at the start to enlighten readers unaware of Jaguar's legacy when it comes to boat composition

Built from world champion stock, the evolution of Jaguar reached a new level with the J43 which comes twice vacuum-bagged to fight off any chance for delaminating, includes a race-quality hull and deck created with 100 percent Core-Cell and vinylester resin, and is reinforced with Kevlar. So certain and secure in the build, a lifetime warranty is supplied with the hull and deck. To justify the eye-watering $750,000 price tag, we now dig into the hydrodynamic engineering functions and traits beginning with the centerline pads that draw air up under the twin hulls to maximize speed without forgoing stability. 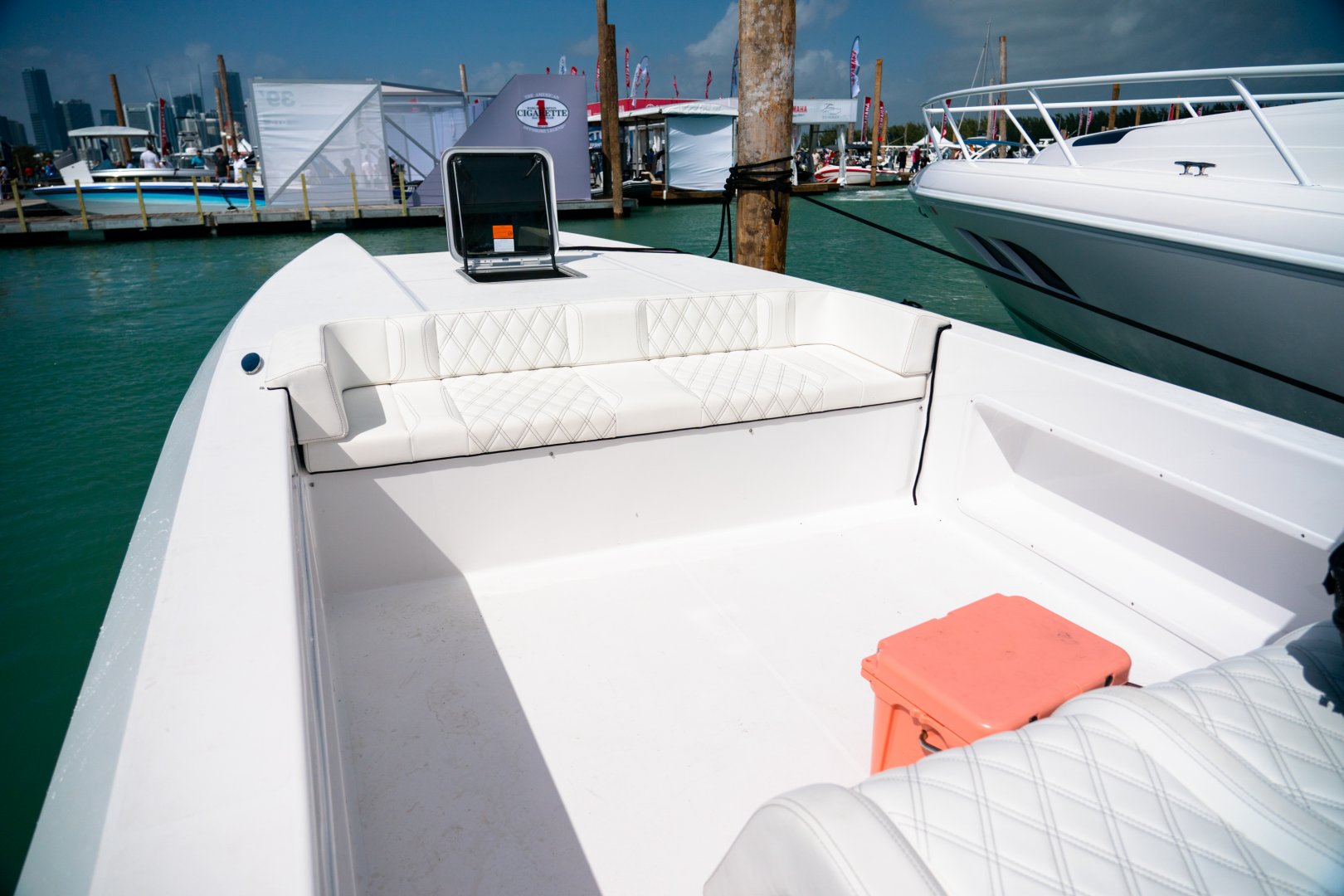 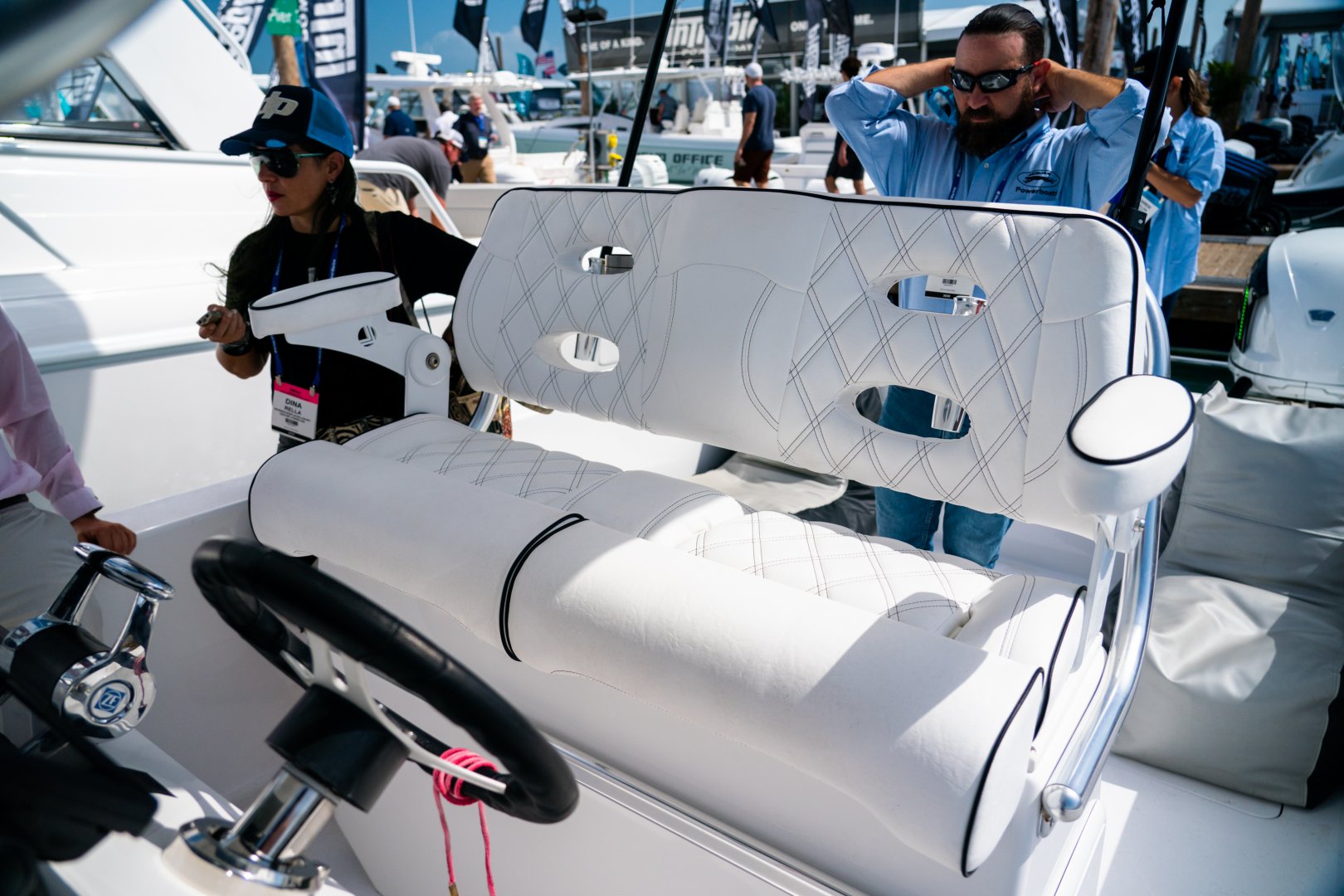 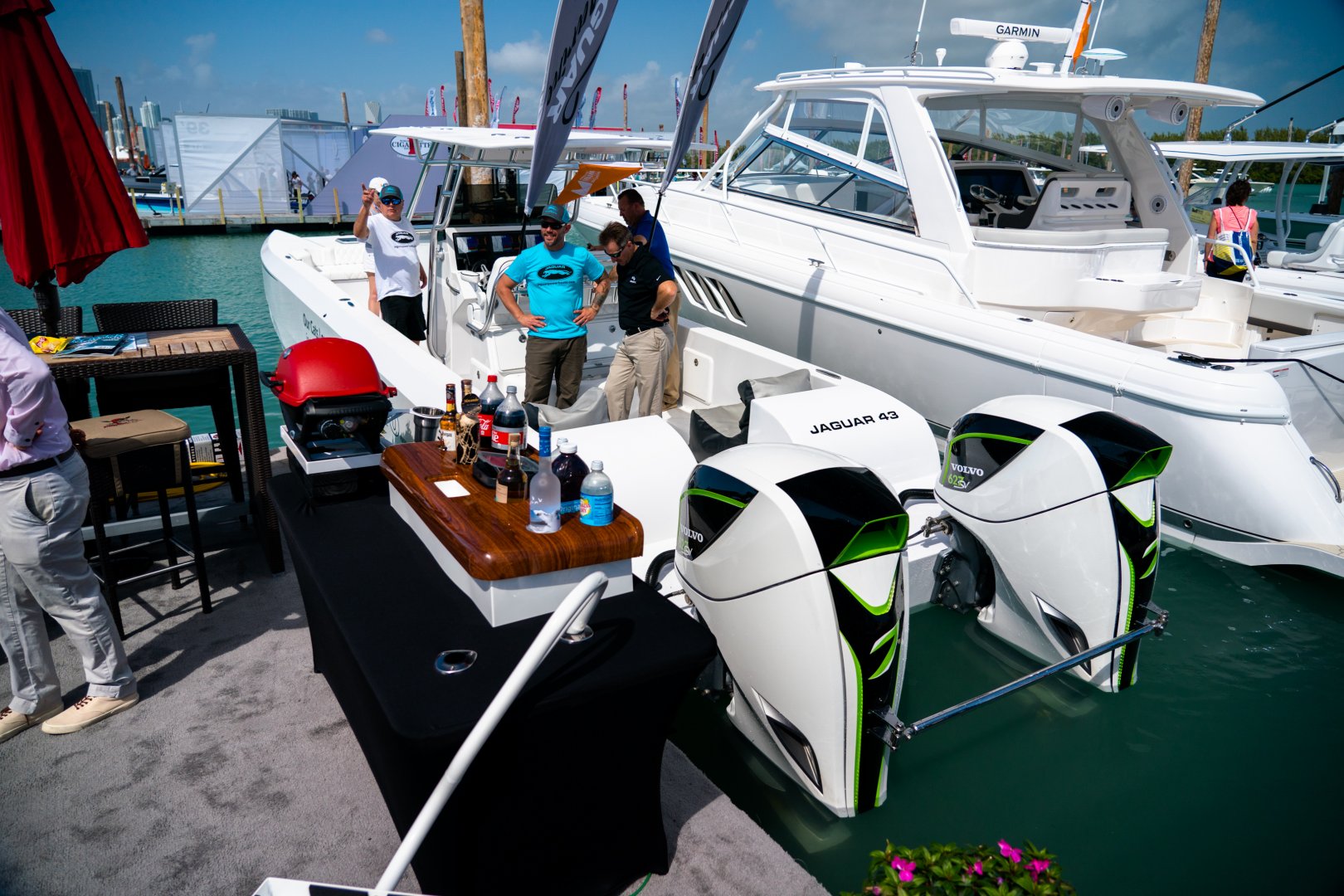 The company website best explains, "The reason for this is to maximize air-assist and help to displace the weight of the boat, equating to much improved fuel efficiency, top speed and stability. The pads primarily act like tracks to keep the boat stable, and like the edges of skis, “bite” the water and improve overall maneuverability. The steps on the other hand, generate massive lift to decrease the wetted 40' running surface and resultant friction, therefore again improving both velocity and fuel consumption simultaneously. Together they make for an incredibly fast boat."

Furthermore, the precise anti-stuffing angle of the bow prevents high-speed dives thanks to the aerodynamic tunnel directing it upwards over the curling crests. The construction of the anti-stuffing mechanism has been tried and proven, and makes rumbling through the rollers both more secure and easier to control. Additional benefits worth mentioning are the radius angles have been hand-crafted inch by inch to maintain a smooth surface for air to pass by naturally and unobstructed; and with a 18" draft, it easily enters beachfronts where other vessels of the same stature must remain anchored offshore. 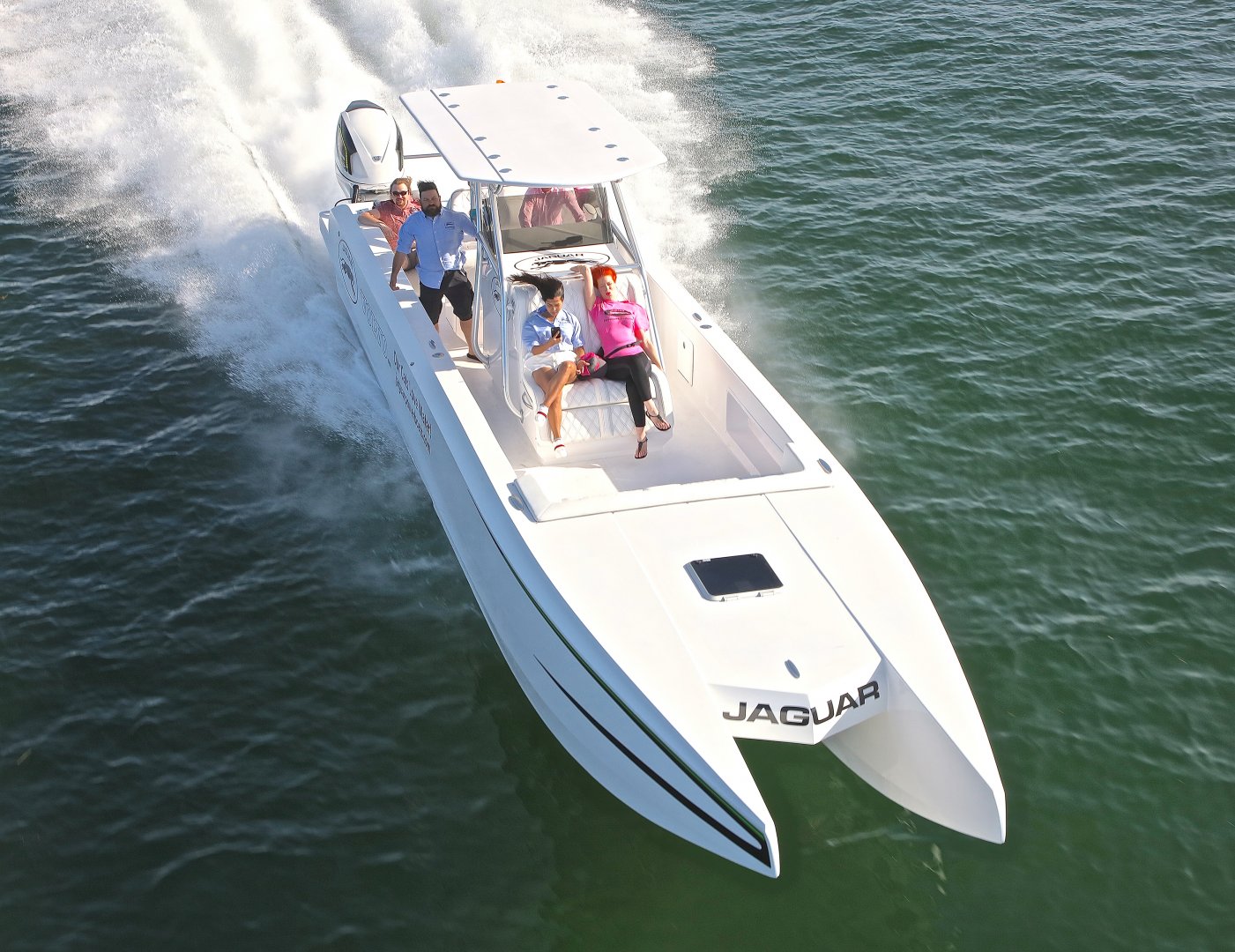 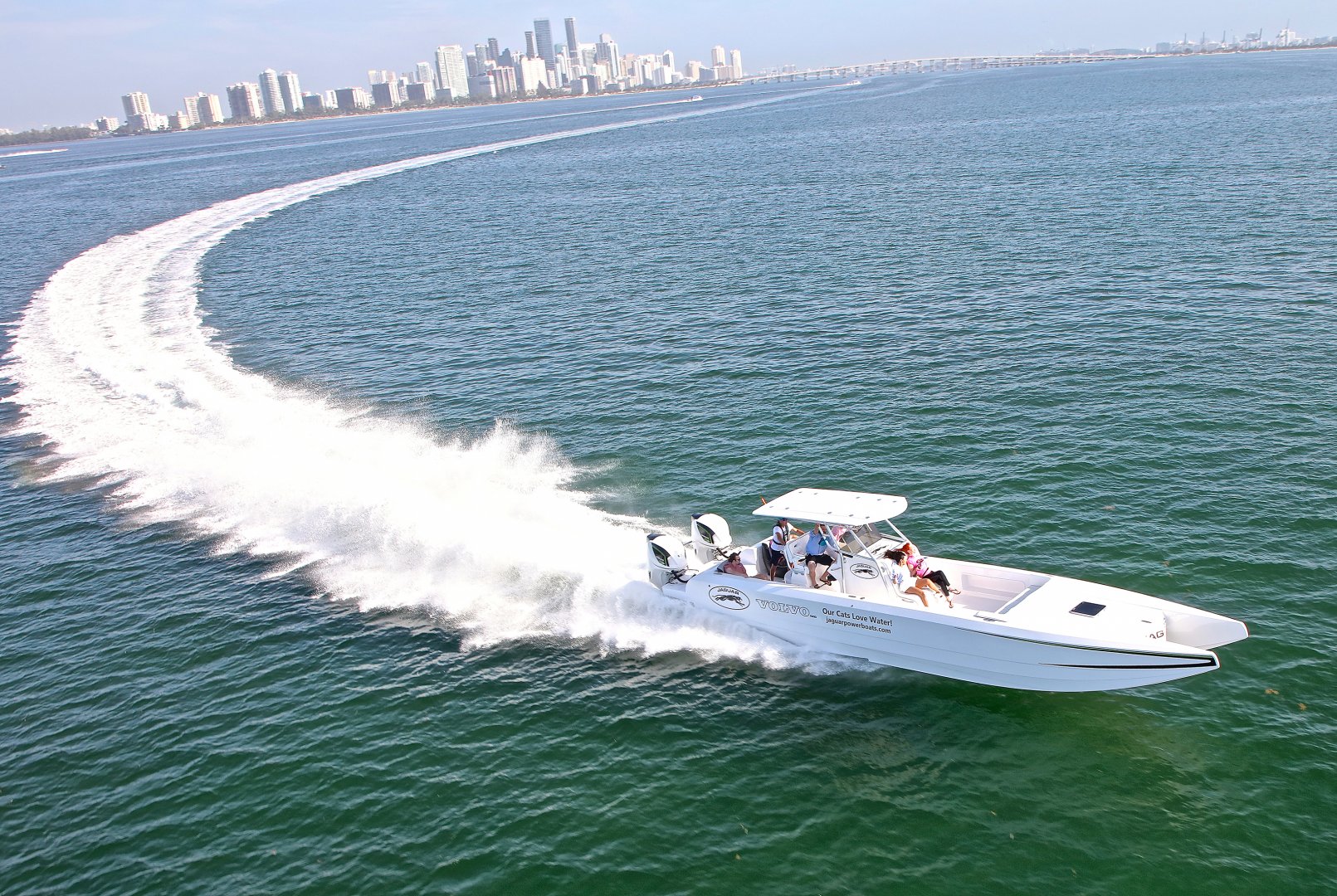 Overtly absent of the typical topical bling characterized on comparable crafts, here the glam is on the transom and deep within the build. In this instance, hull No.1 came dressed with twin Seven Marine outboard 627-hp engines bringing the beast on plane in 25 seconds in preparation for comfy cruising in the vicinity of 55 to 60 mph. Praised for phenomenal fuel efficiency, while rotating 4,000 rpm and running 60 mph you can expect to burn 50 gallons per hour. And for the adrenalinistas who demand more high speed wish fulfillment, nudging the throttles forward puts the J43 in the triple digit club at 105 mph. Whoa, what's not to love about that!

You can get your 43-footer laid out in any of these three ways: as an angler able craft with all the works for reeling them in, a family day boat, or with the lower cabin for those interested in overnight cruising. 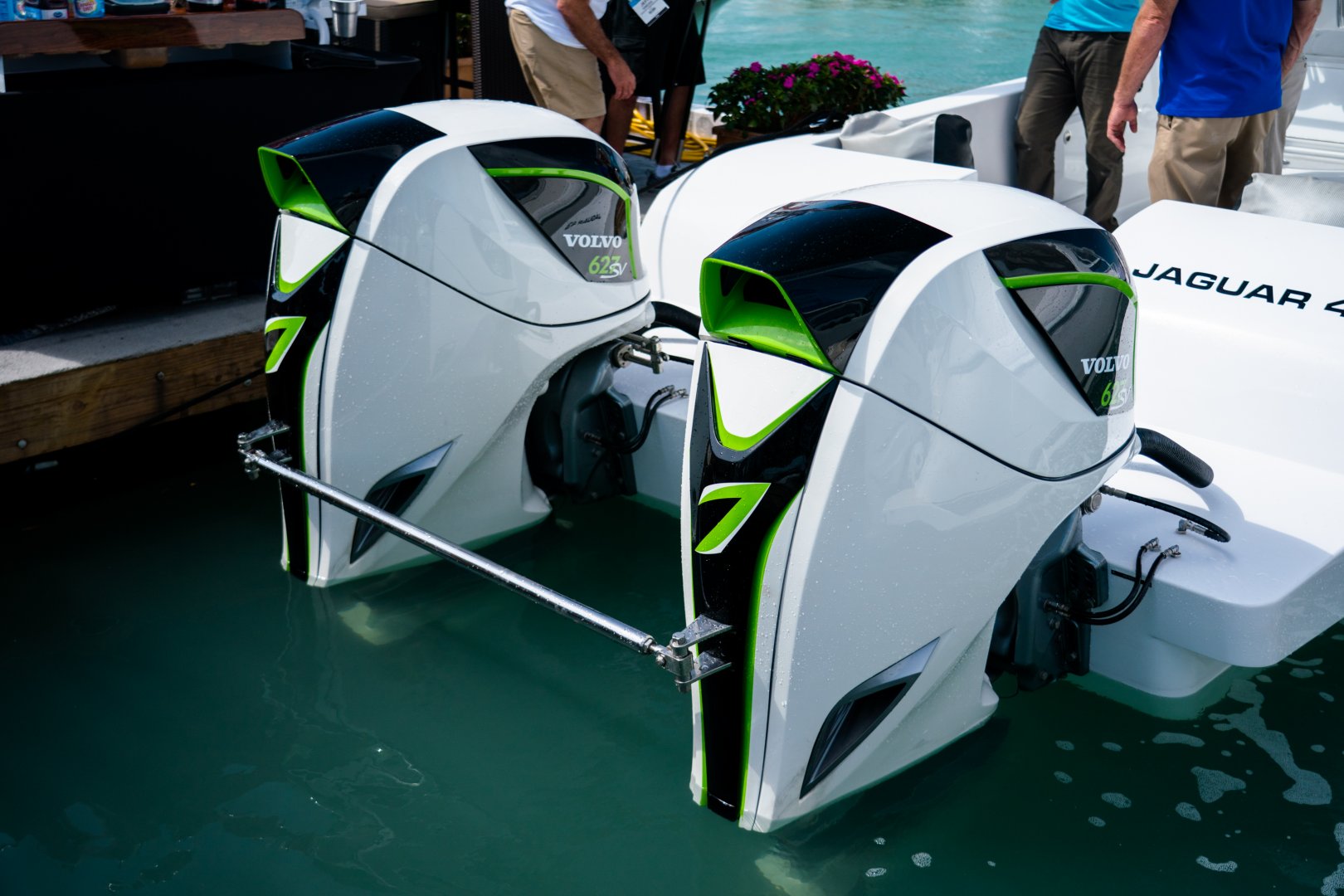 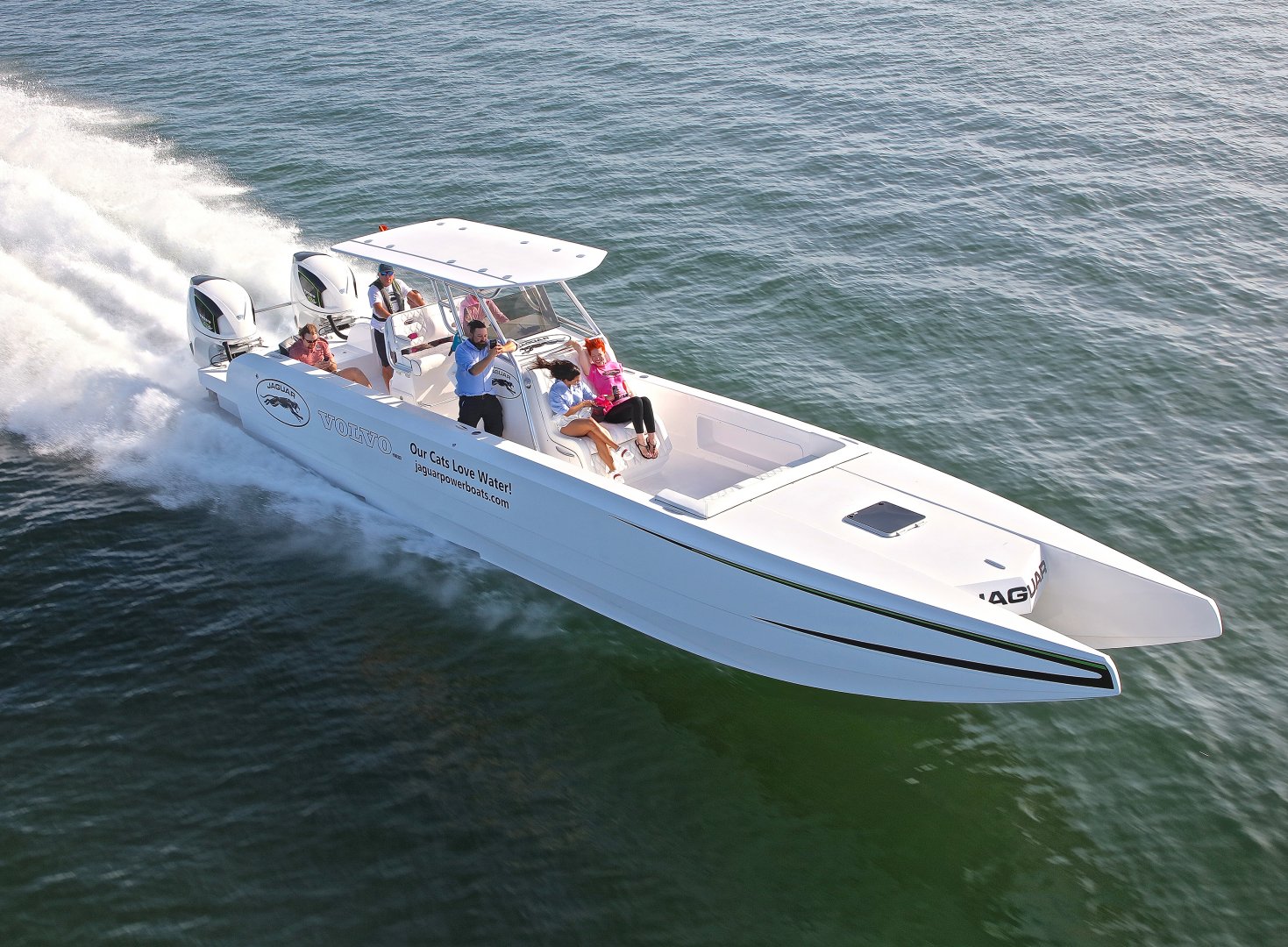 Company CEO Betancourt also spoke to me about the firm's great retention rate which he attributes to the intimate relationship Jaguar Marine forges with its clients, thanks to the distinct customizable features involved with each purchase and buyers satisfaction getting what they wish for on the water. And this latest example -- the center-consoleseque catamaran will leave you at a loss for words. 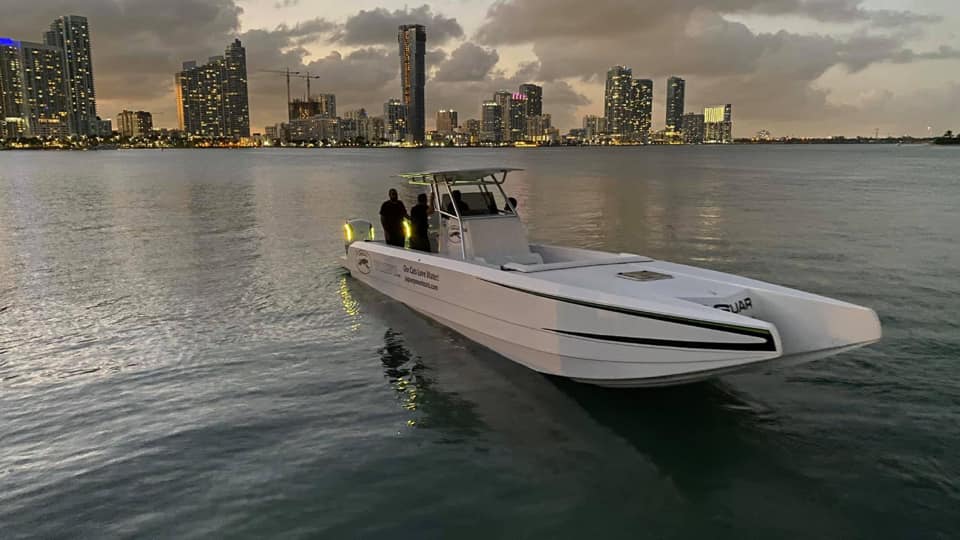