Eta didn't know what she wanted to be... a tropical storm, a hurricane, or just a pain in the ass for powerboaters who waited all the Orwellian-year-long for the 28th Annual Key West Poker Run escapade down to Mile Marker 0. But the fun and the run must go on, and that they did – in a wet and wild way!

Florida was already flooded and seas were snotty, twisted and pissed off from Eta's original touchdown ushering in 12- to 17-feet offshore rollers, thus it was no mega-boom when Wednesday's wave warriors lost their battle trying to get to paradise. Bunkering down overnight an hour north in Marathon seemed a wise choice; the alternative: busting up boats and body parts, well not so much. Thankfully, the Florida Powerboat Club (FPC) worked its last-minute magic organizing lodging and docking at the perfect place to be held as a storm prisoner, the Faro Blanco Resort and Yacht Club.

Waking up to clearer skies and an apparent change of heart from the weather gods, the next morning it was all systems go. The Marathon clan clawed through their final 50 miles into Key West and the FPC Thursday caravan hit the throttles from Haulover Marine Center and Grove Harbor for their 170 miles of mischievous bliss weaving around the mangroves. Faro Blanco also prepared to welcome another rush of raging horsepower later that day. The pack of 20 or so was easily recognizable; each big-daddy wore a Marine Technology Inc (MTI) badge of honor. MTI's brand-exclusive weekender was filled with high-speed slicing and dicing action around the upper Keys and lunching jaunts to favorite spots like the Islamorada Fish Company and the Postcard Inn and Tiki Bar. A special thanks goes out to Steve at TNT Marine Sales for sharing his amazing aerial footage with us. 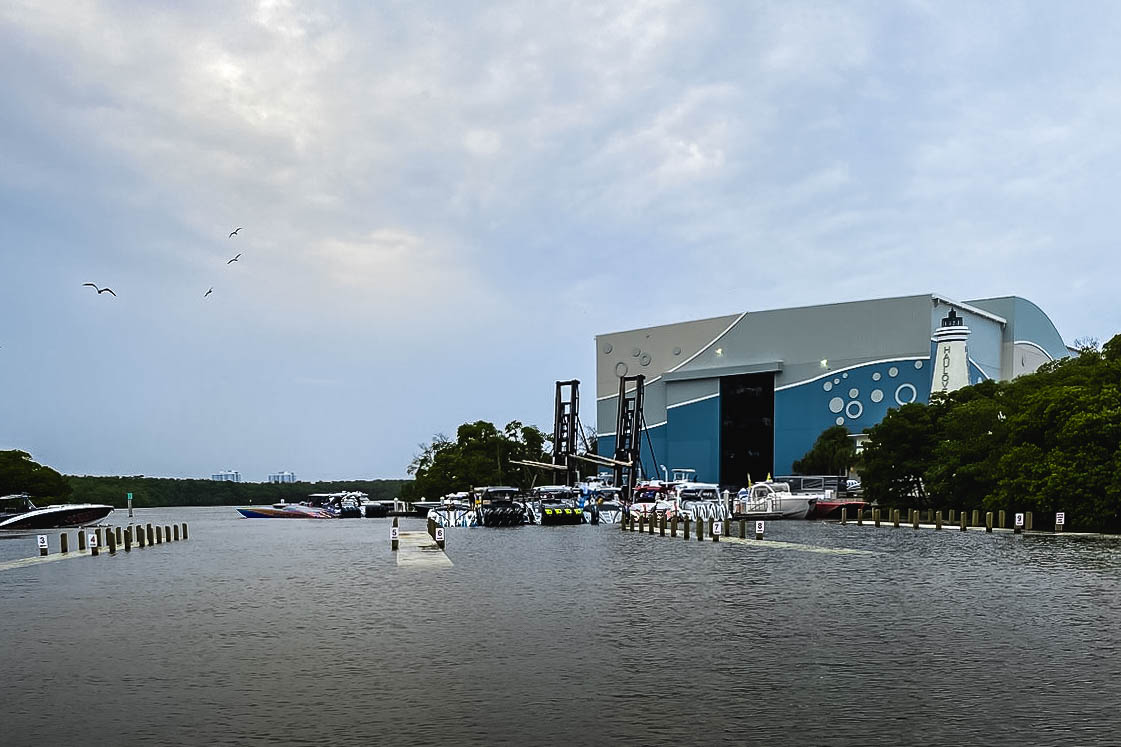 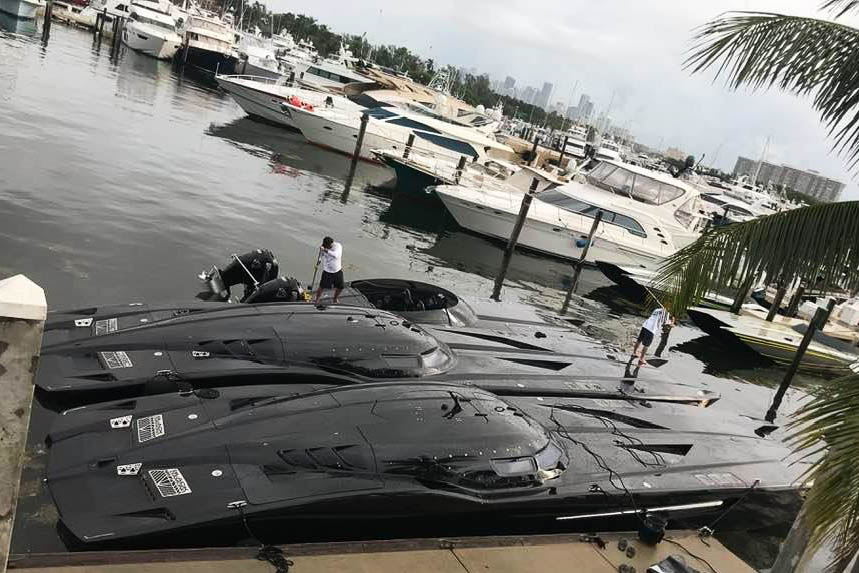 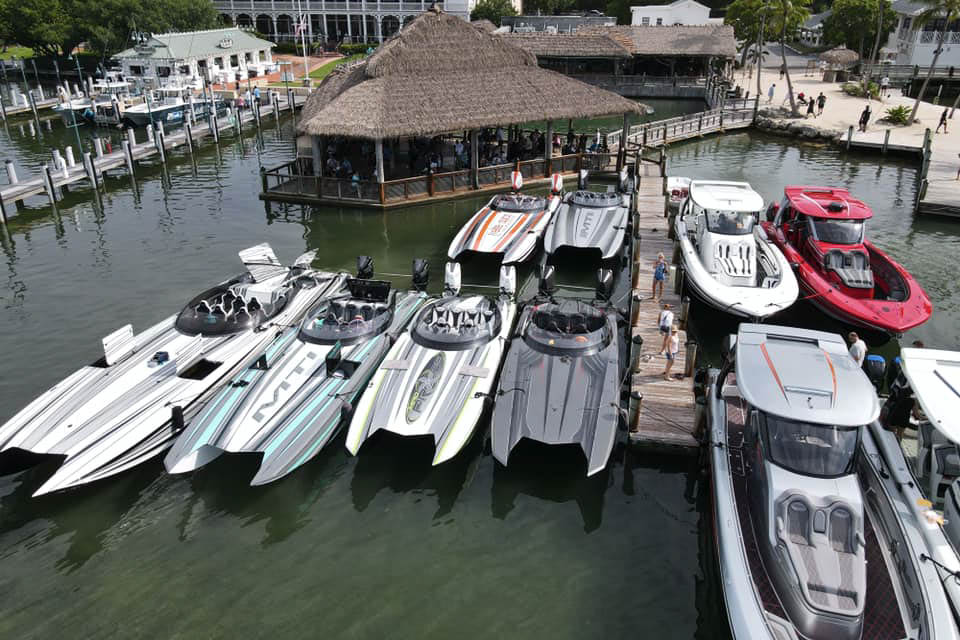 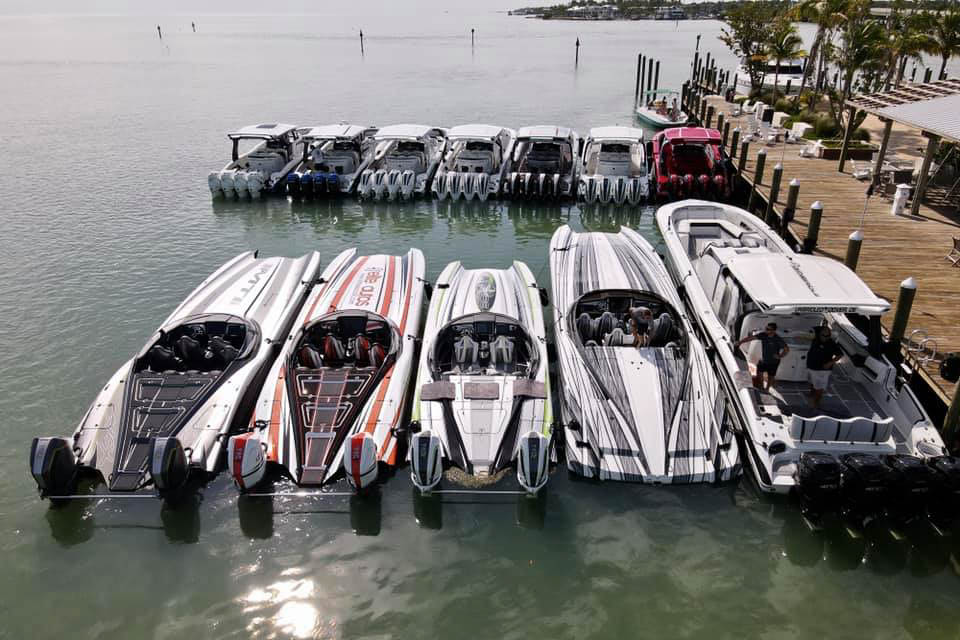 Standout Speedsters ​
Memories made in Marathon might satisfy some, but it's the Key West keepsakes that take the cake... and the Florida Powerboat Club makes sure of that. Enticing 160 speedhearts out of their big-boy toy boxes to come play, the 2020 selection was sweeter and more varied than a 2.5-pounder Sampler® box of Whitman's chocolates. In the accolades arena, Cigarette Racing Team ruled the top tier touting 27 registered speedsters, three of which being the Tirrannas in all their 59 feet of glory.

Looking at the line-up it seemed every maker under the rainbow responded to roll-call with Apache classics like Tatonka, Crazy Horse and Ultimate Warrior II, 80-footer Lazzaras, a Warlock and Wellcraft Scarab, and the not to miss big pot of gold at the end... Mark and Eileen Fischer's bold and beautiful new 118-foot Ocean Alexander Eileen's Way.

More greatness continued to be revealed including Nor-Tech's bold new beauty, the 460 Flyer (detailed coverage and photos in the FLIBS story). The praiseworthy pièce de résistance freshly dipped for the run after its Lauderdale launch was a sight for "soaring" eyes as the quad 450s ate up the Atlantic with ease and attitude. And not far off from the fab 460 Flyer, excellently positioned in front of the A&B Lobster House was another pair of "new kids on the dock" from Renegade Powerboats.

Randy Kent of Marine Concepts Motorsports, a Midwest Renegade dealer, was the master of center console ceremonies enthusiastically tasked with presenting the 33' Open and 38' Open; the latter flashing a new hardtop design drawing in lots of attention. Additionally, due to industry demand, Renegade owner Manny Oses and his Hialeah-based crew currently have a 42' in the works; whilst at the same time continue to make advancements with the brand's special operations patrol boats for law enforcement, homeland security and combat. 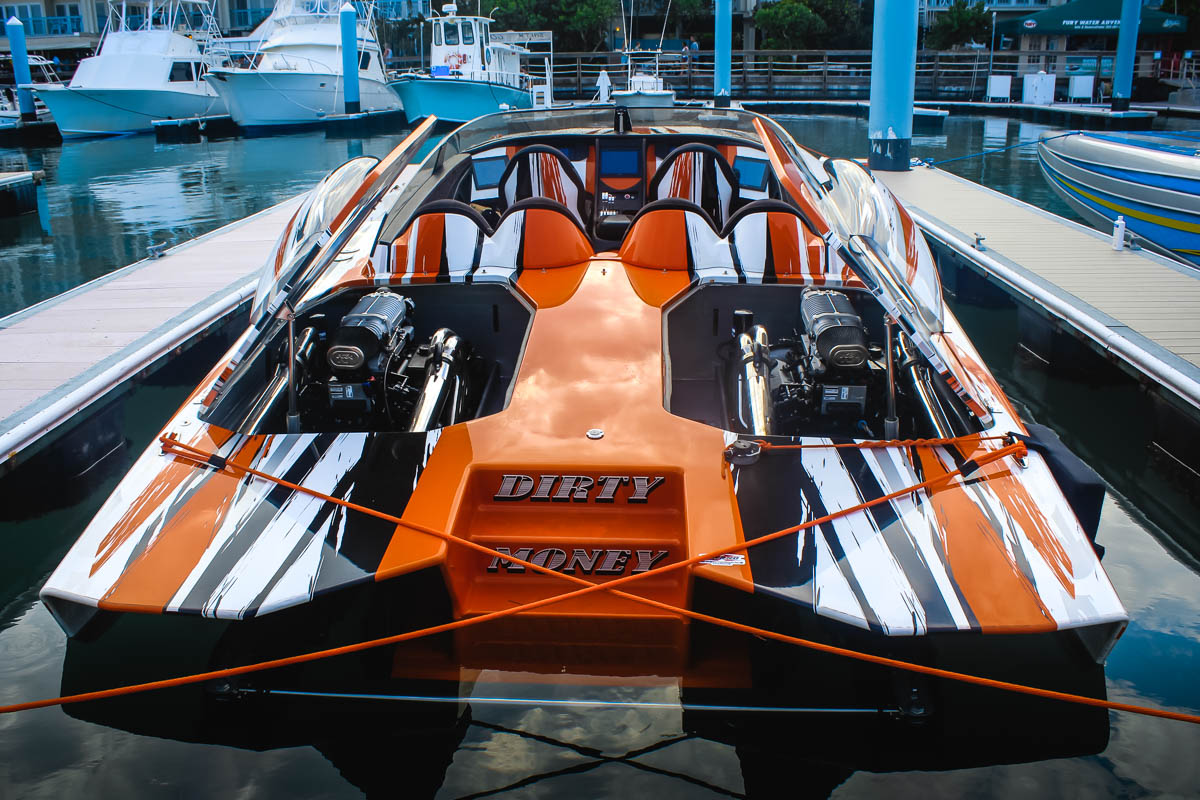 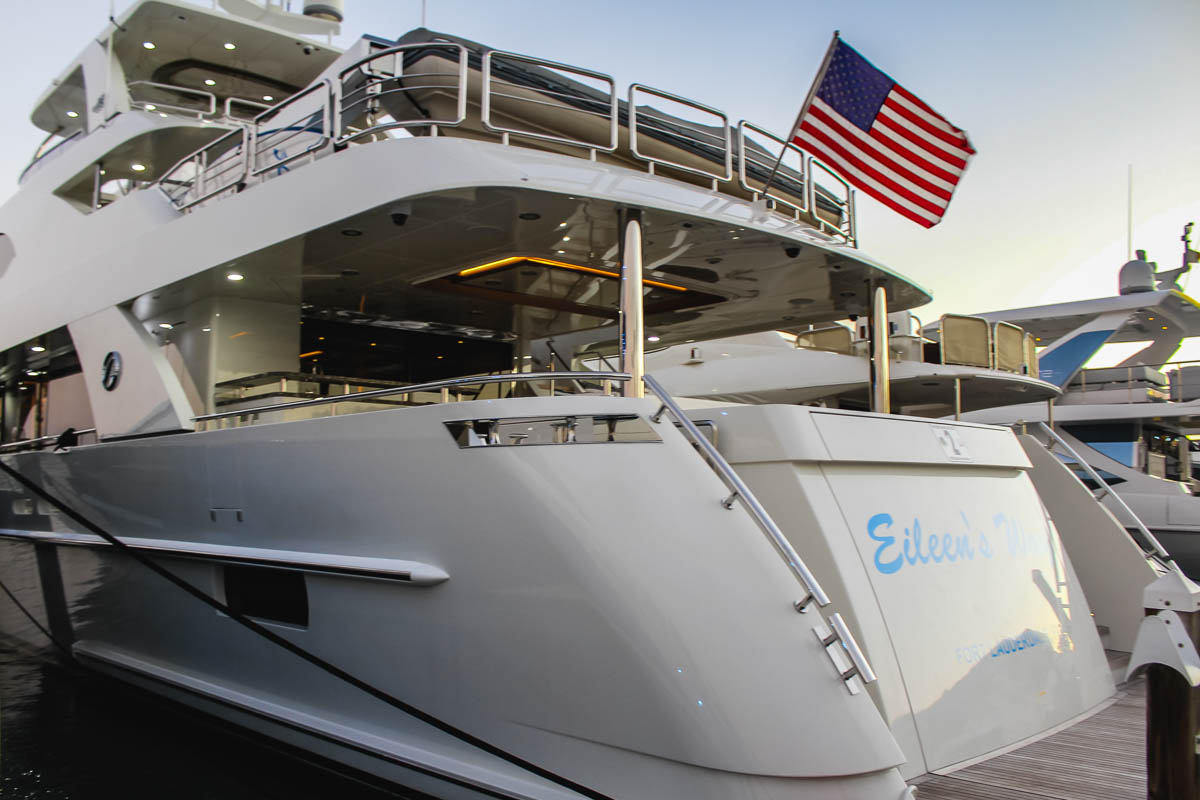 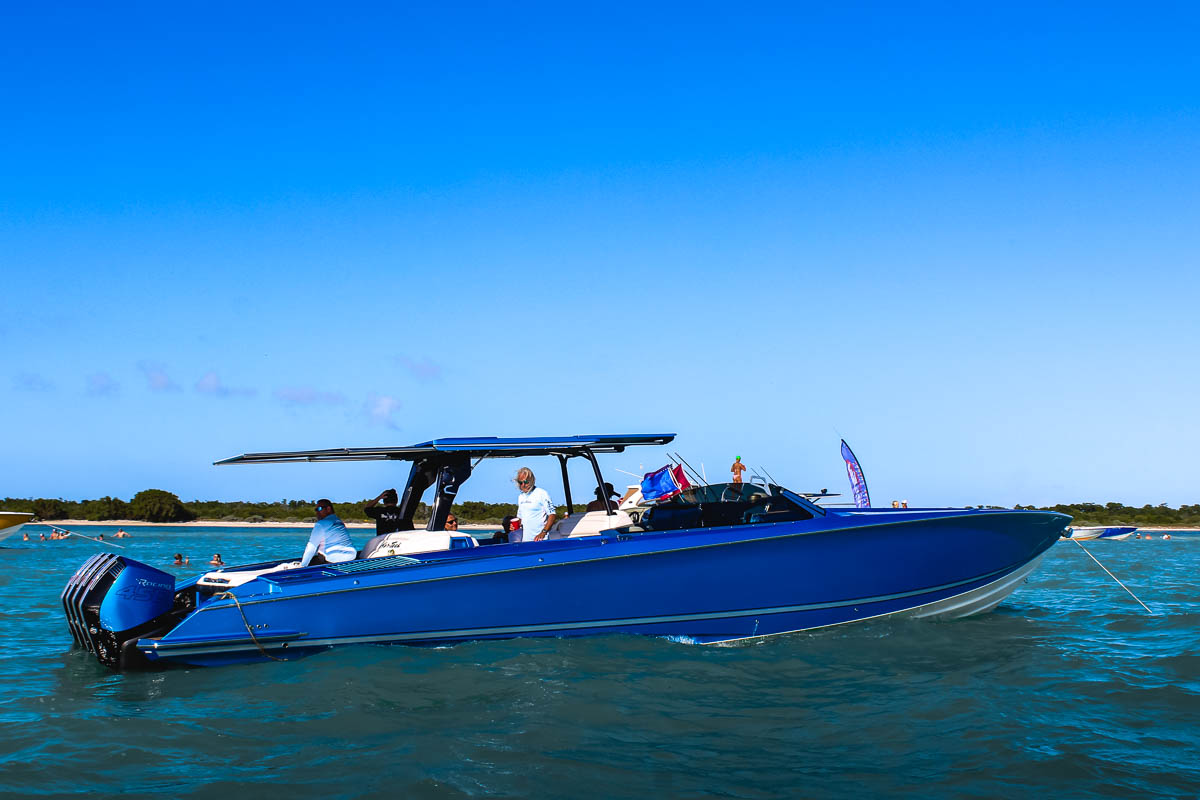 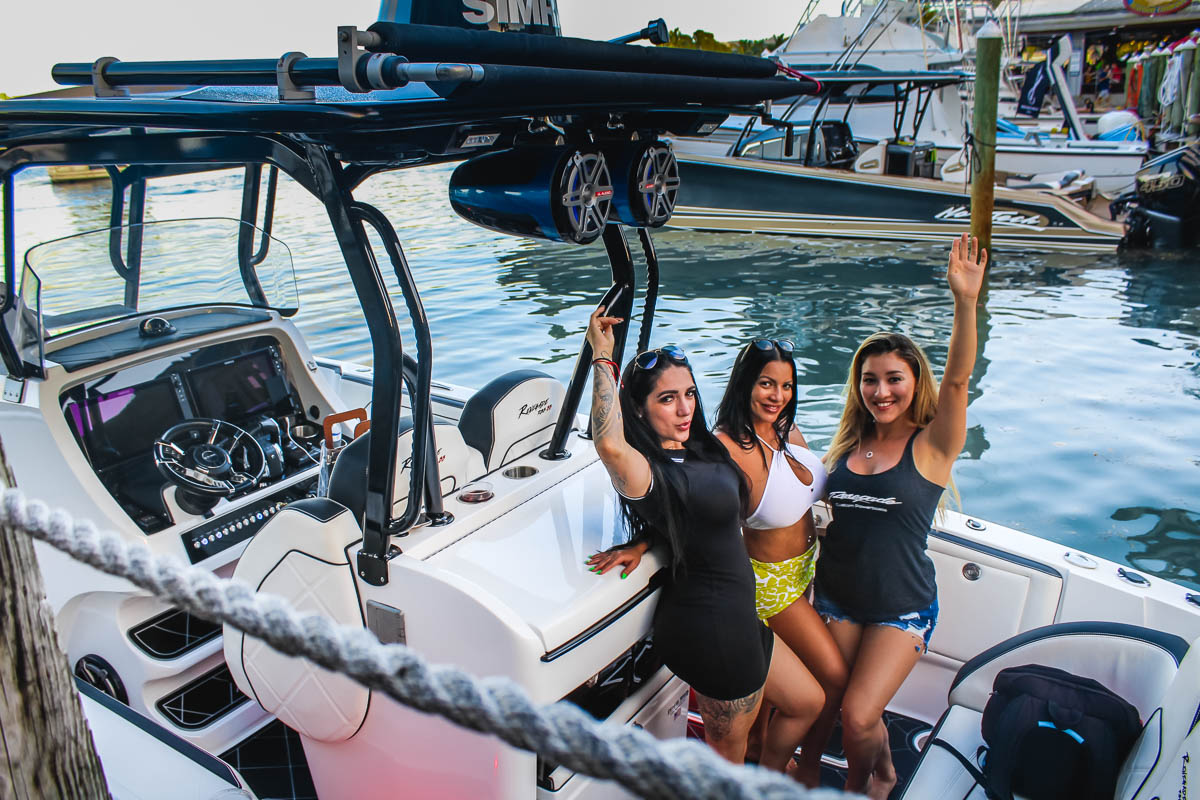 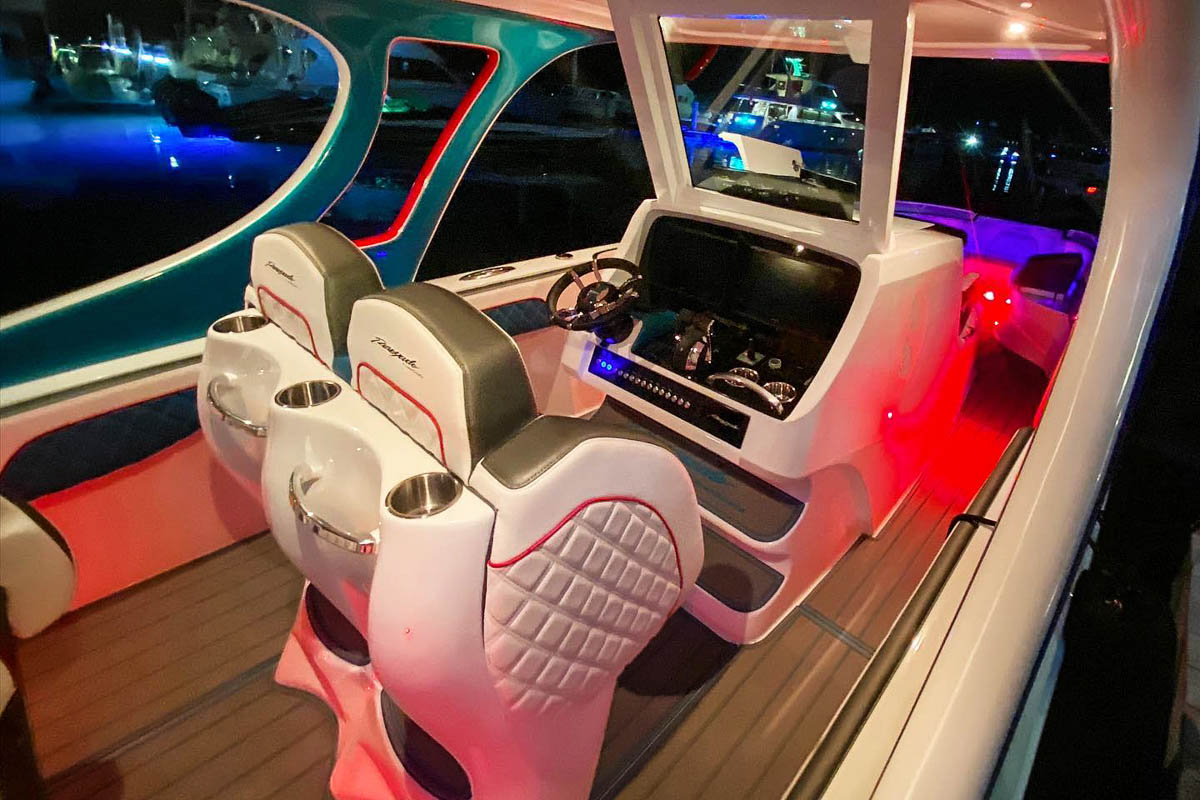 Luckily no commercial Renegades were deployed to Key West and the only battle was an amicable one between stern drive commandos versus those having gone overboard for the outboards. There's no doubt the color-matched transom clip-ons outnumbered their concealed counterparts, but regardless of the mad-money squeeze and ritualistic maintenance required, rumbling and revving prevailed.

The enthralling Lamborghini-powered yellow 48' Raging Bull and green 52' Super Veloce G7 MTIs (which finally met hull to hull for the first time), as well as the Donzi, Fountain and Outerlimits entourages authenticate inboards are alive and well. Funnily enough, the common denominator uniting the innies and outies was actually the LED lighting. Once the sun tucked itself behind the horizon and daylight vanished, cockpits and transoms came alive with bedazzling LEDs and the Conch Republic promenade was glowing like New York City's Studio 54 dance-floor. 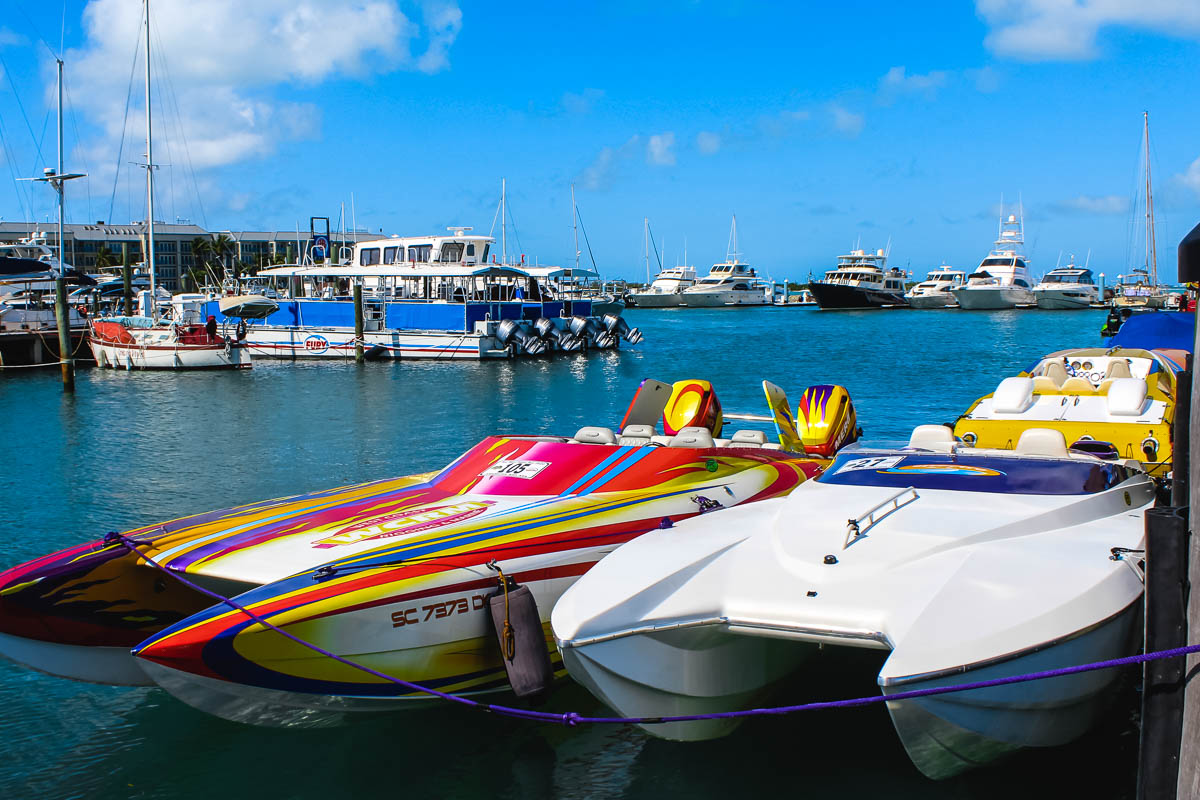 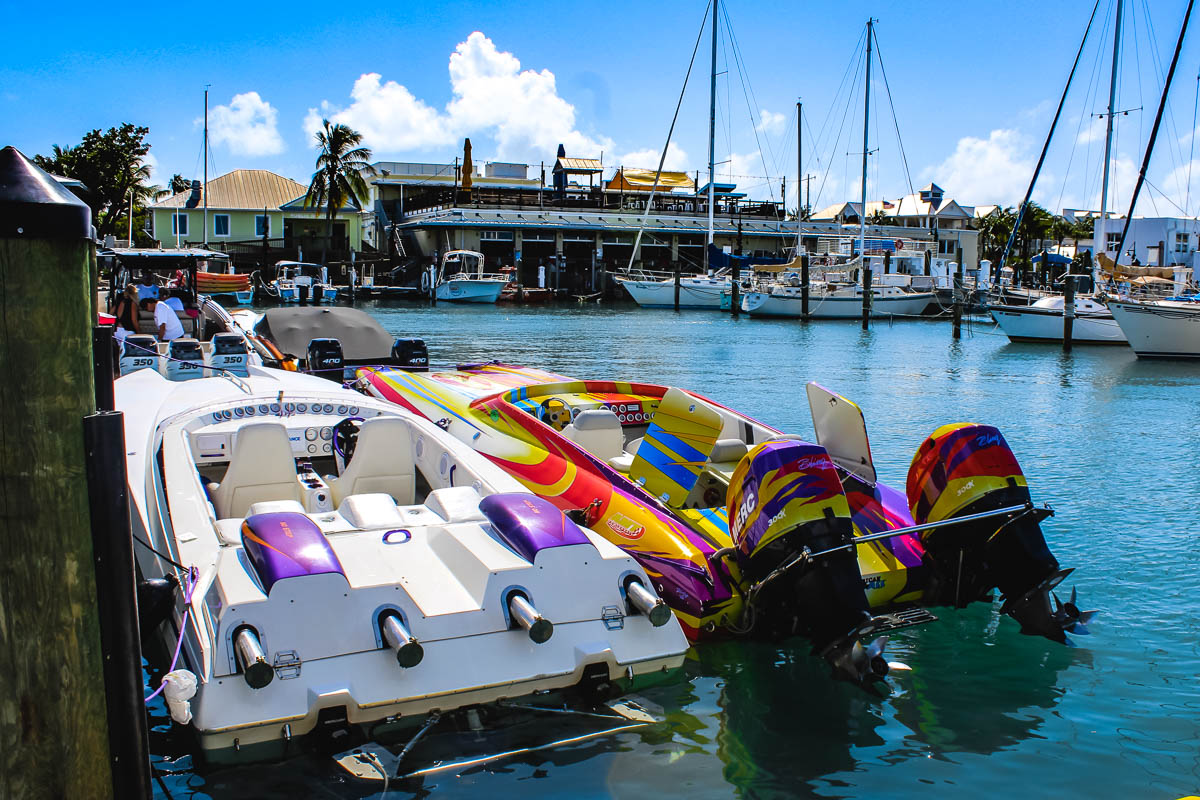 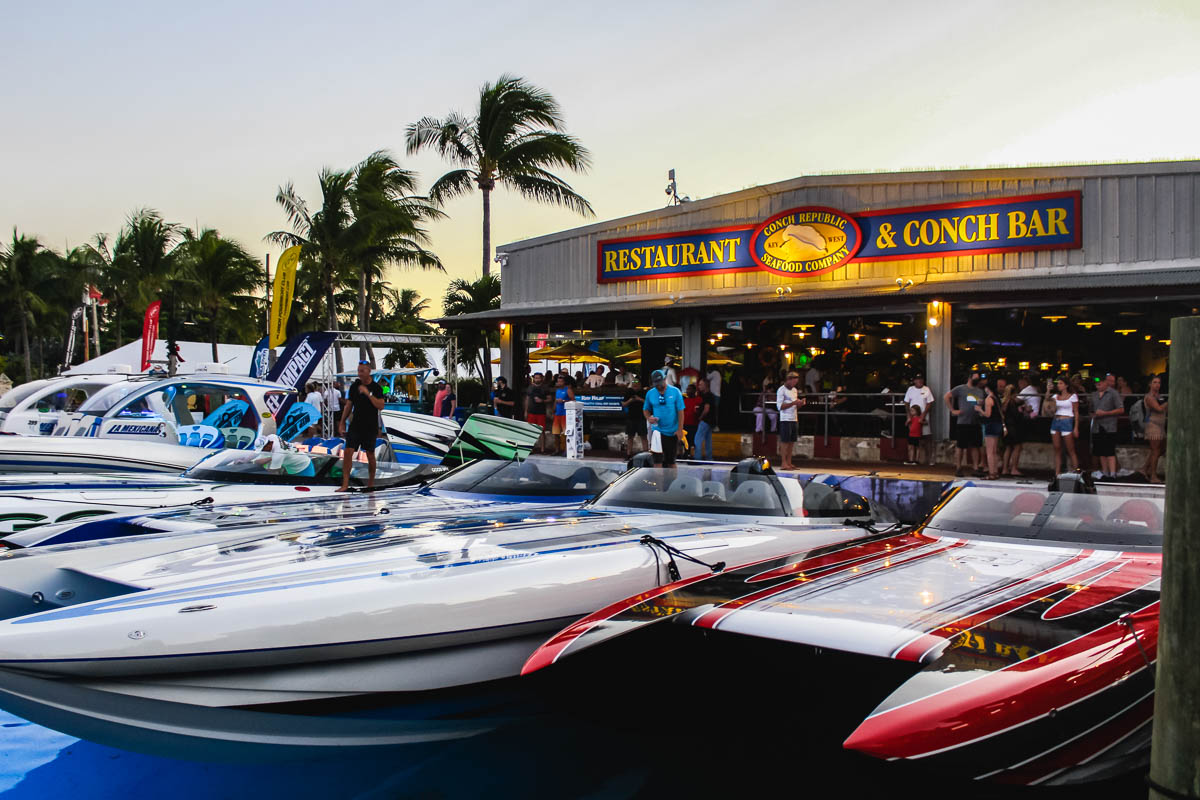 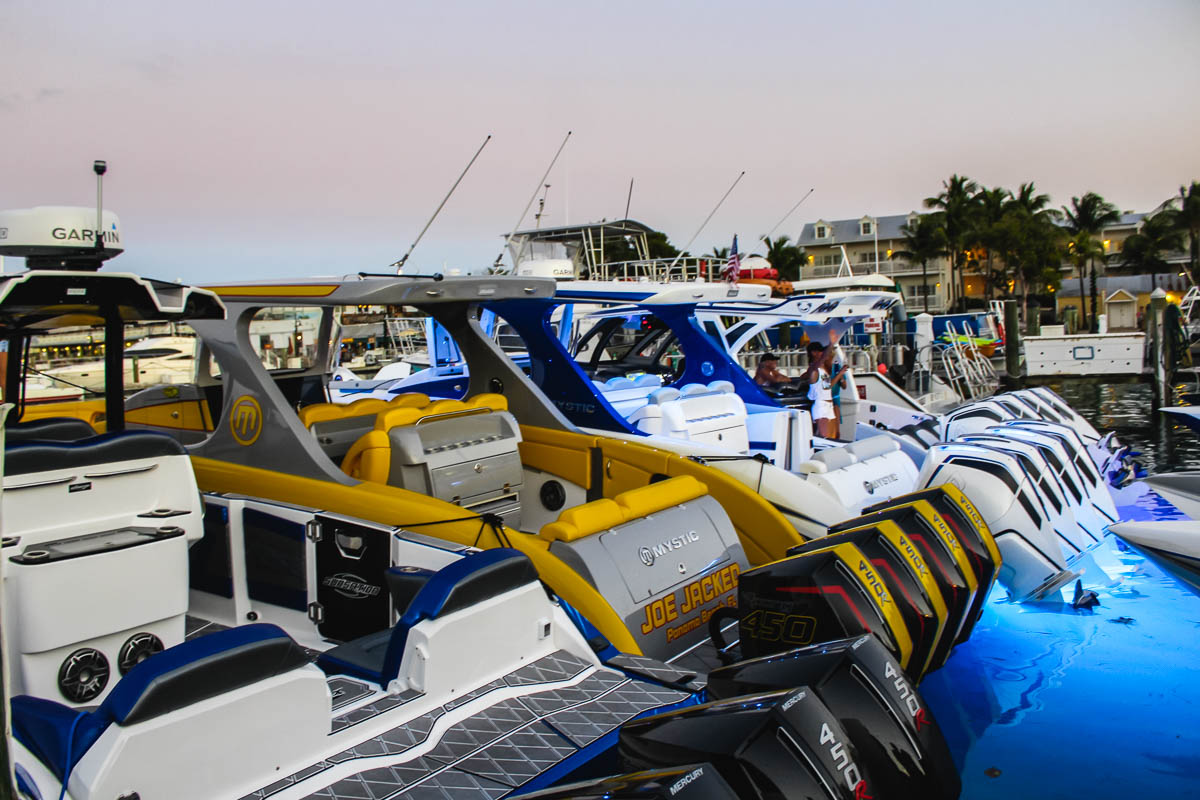 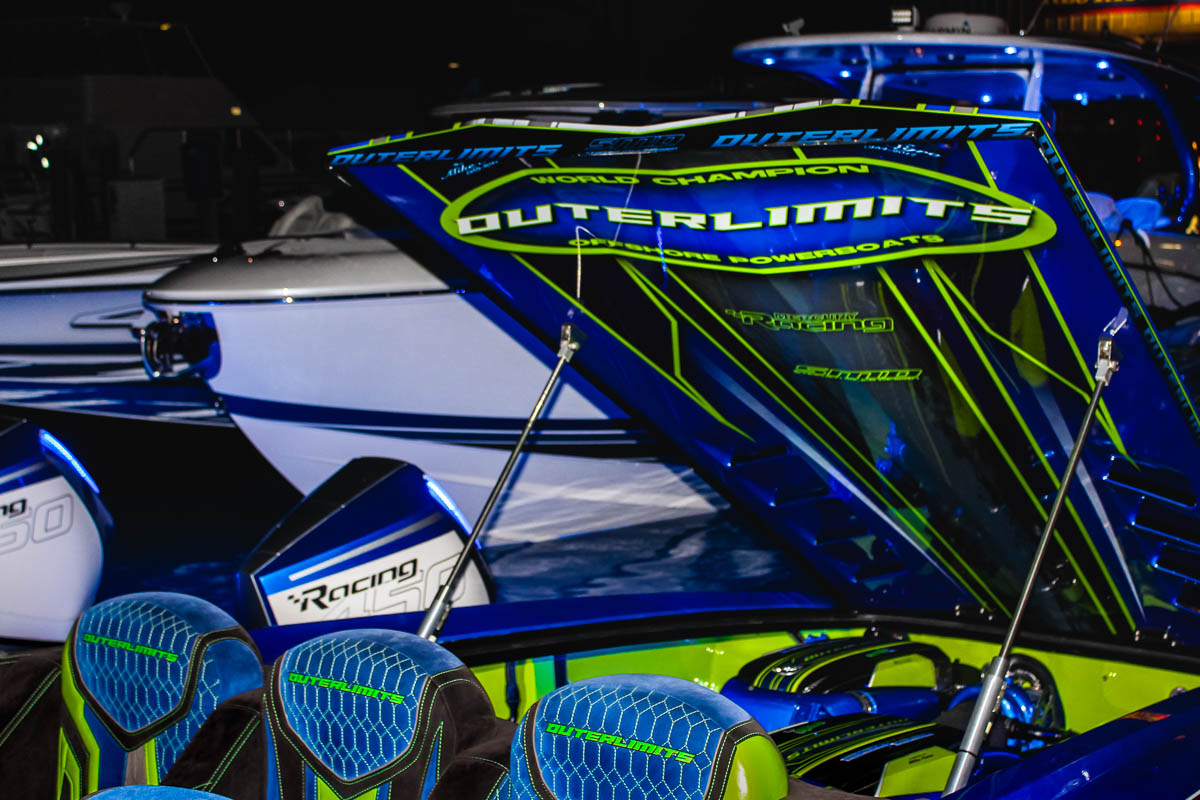 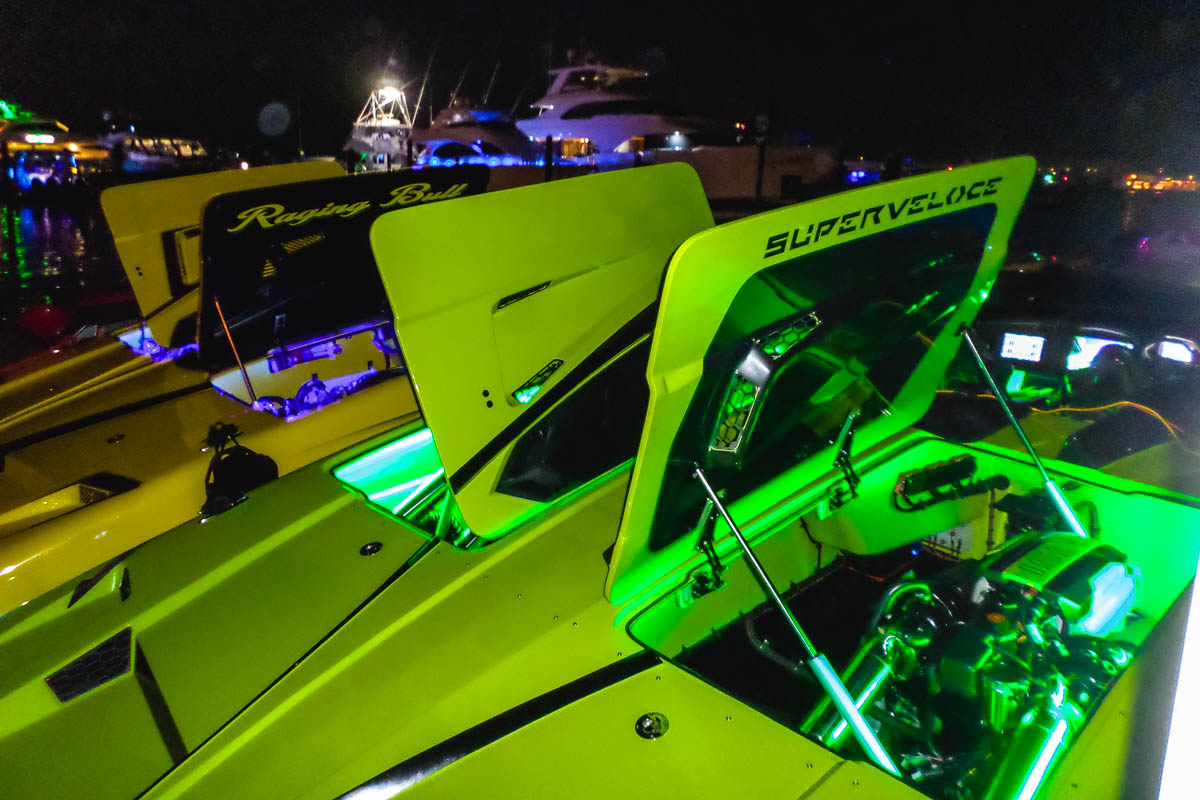 Boy Boat Meets Girl Boat​
LEDs on or off, one boy and one girl stood out in the light -- Good Boy Vodka and Mrs. War Party. Let's start with Good Boy Vodka, it is Alex Pratt's MTI equipped with Mercury Racing 1550/1350 engines. If the good-boy toy looks familiar, after he scooped up the 48' carbon hull in February at the Miami Boat Show, it made a massive summer splash at the Lake of the Ozarks Super Cat Fest and Shootout.

The splashing continued off the water at a string of parties sponsored by Pratt's new vodka label but this time it was over ice from bottles of carbon filtered, five times distilled Good Boy (which generously flowed in Key West too). But the best part is... not only can a bottle or two of that smooth American blend be yours, why not compliment it with the signature speedster? As I sit here writing, the Good Boy Vodka MTI was just listed with Performance Boat Center for $1.2 million. Well, Christmas is coming!

Yup Christmas is right around the corner, but for the divine Brittany Dunn aka Miss Speedboat, aka the-soon-to-be Mrs. War Party, the very merry day for this girl came a few months back. While the Wuhan beer bug forced Dunn to push forward her wedding to fiancé Bubba Chrisco, it didn't hinder taking possession of her 368 Skater, Mrs. War Party.

Minimalist in paint, but hotness all around, the 2018 edition was purchased from Offshoreonly.com pioneering legend Steve Schuble and prepped at Supreme Marine in Fort Lauderdale by Troy Hannon and company. Sitting at dinner with the War Party posse, the conversation started with traumatic tales about the Skater's battery cable and breaker rewiring fiasco and concluded with carbon-fiber scoops on the 450R cowlings and Shaun Torrente Racing jackplates that have been added, hoping to bump top hop up by a few miles per hour.

Brad Schoenwald of Tres Martin's Performance School, who is like a father figure to Dunn from their time working together at Powerboat Nation, was on throttle-daddy duty and will be helping Dunn with commanding her new kitty in the months to come. What was missing from this year's poker run however was Mr. War Party's 39' Cigarette center console. It was recently sold and serving as a replacement is his new 2014 RIB Airship Lil' War Party. It's great Bubba and Brittany have such a sense of humor, when I first heard the Airship's name I thought Lil' War Party meant "they're expecting". I quickly got my answer. 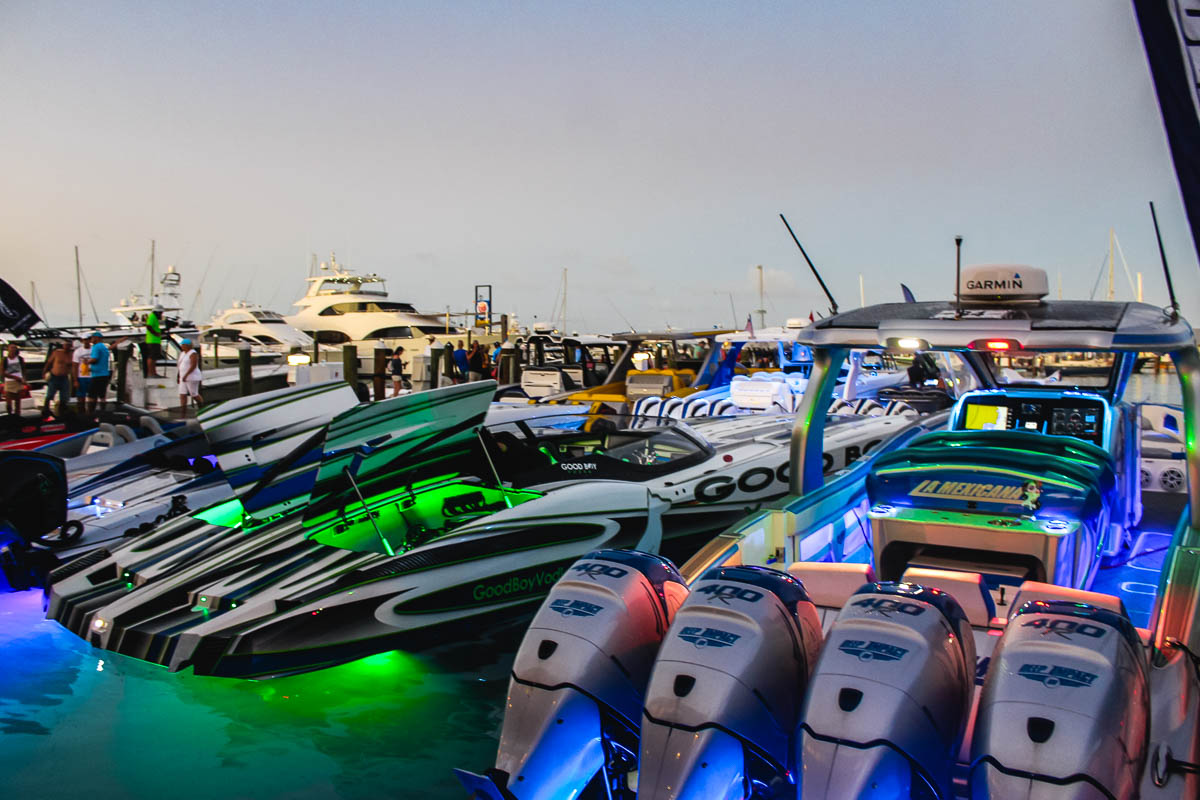 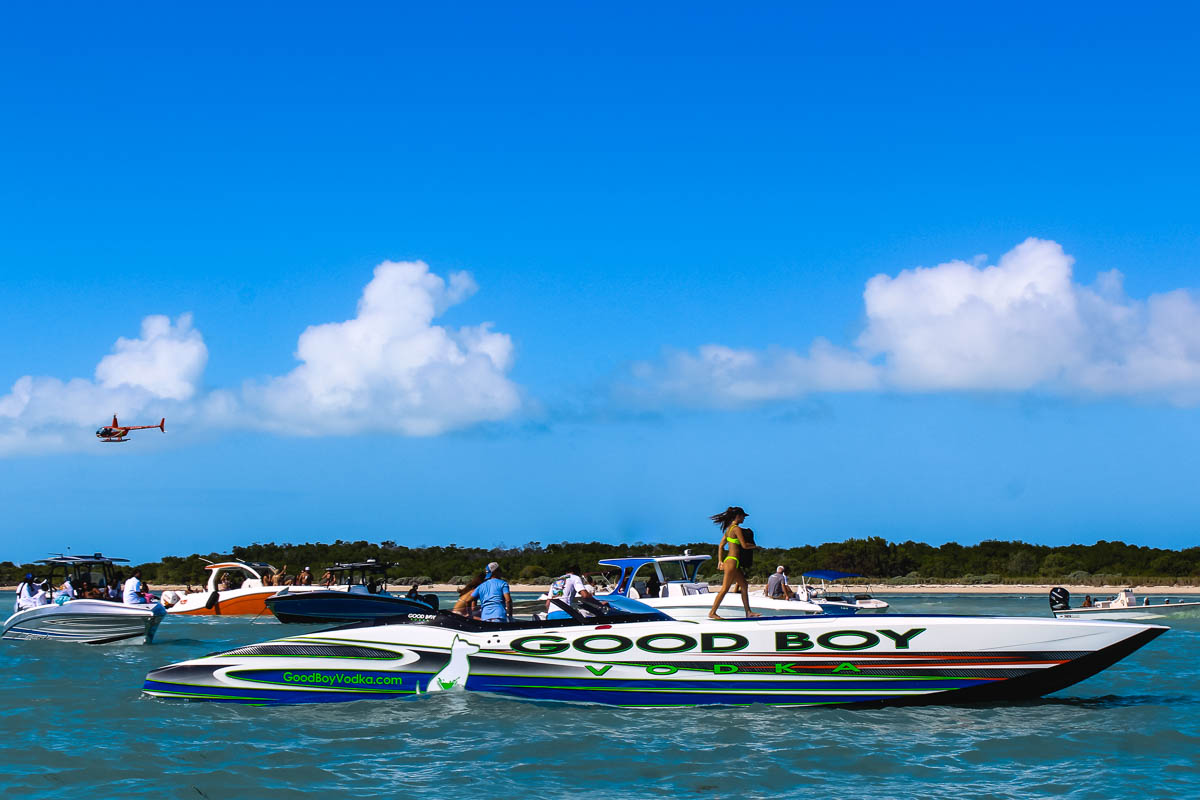 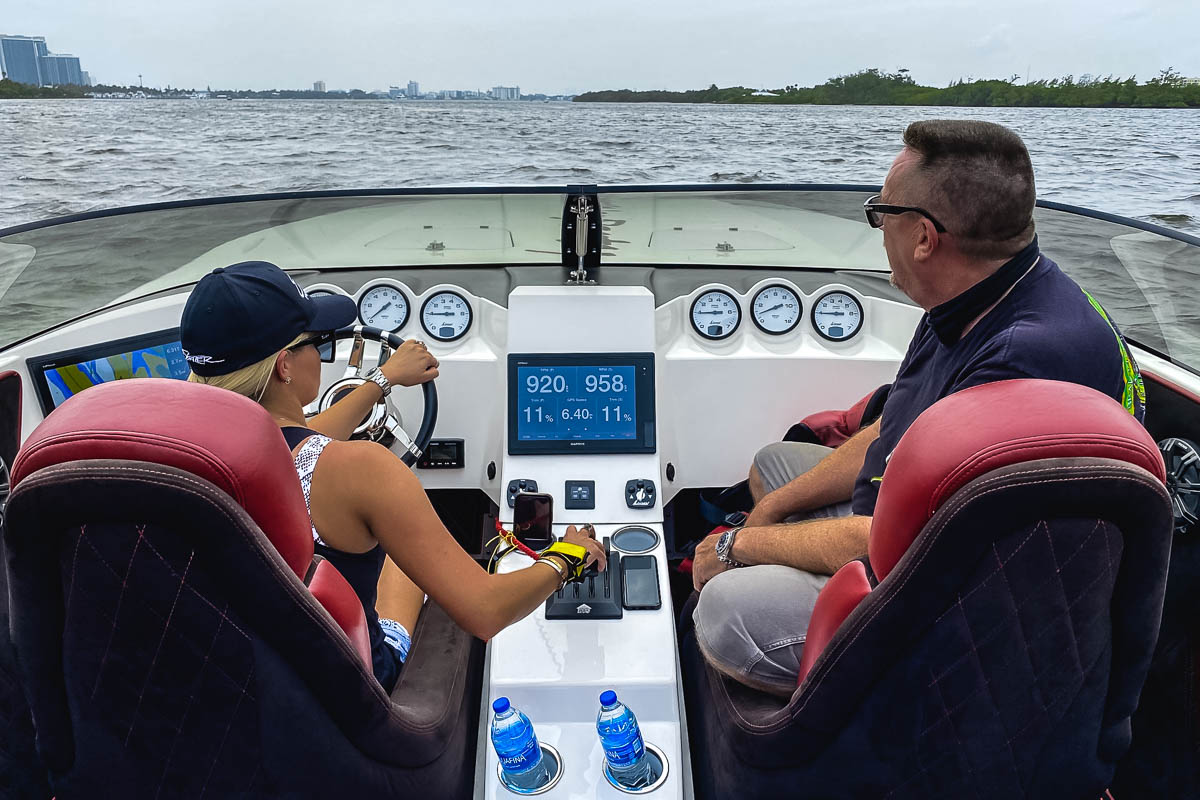 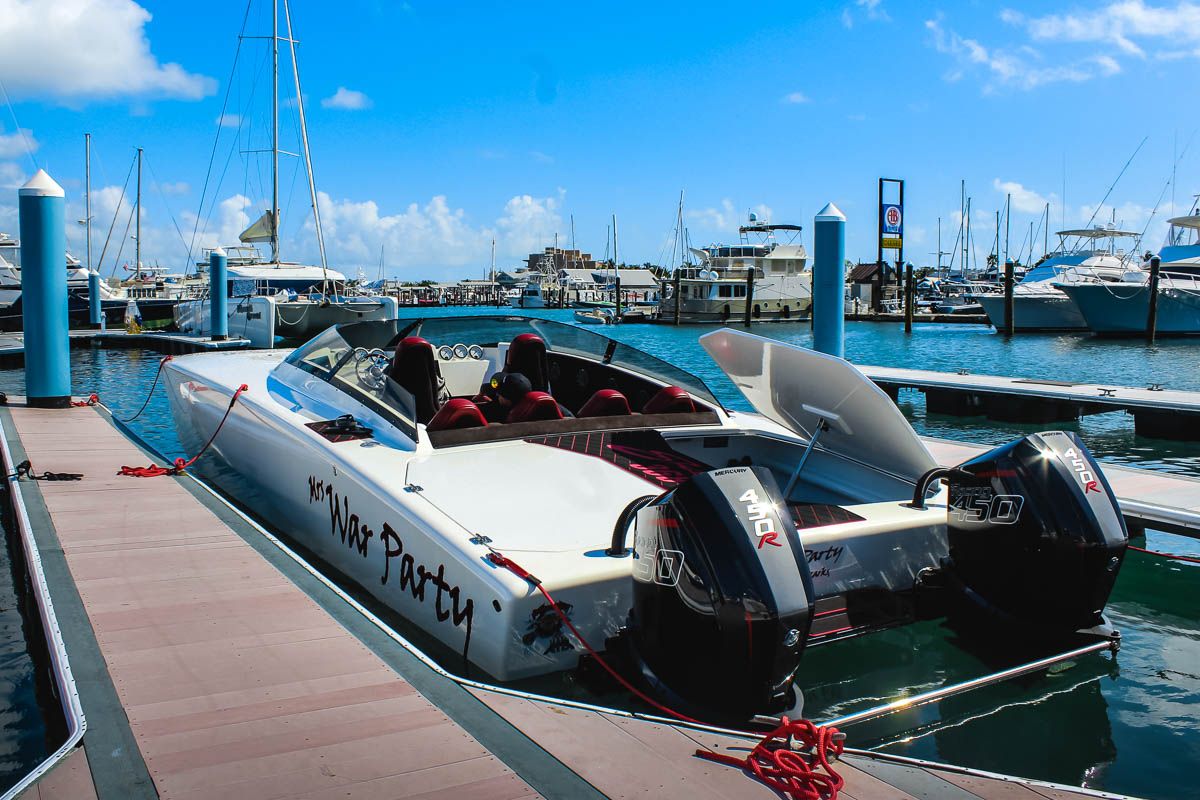 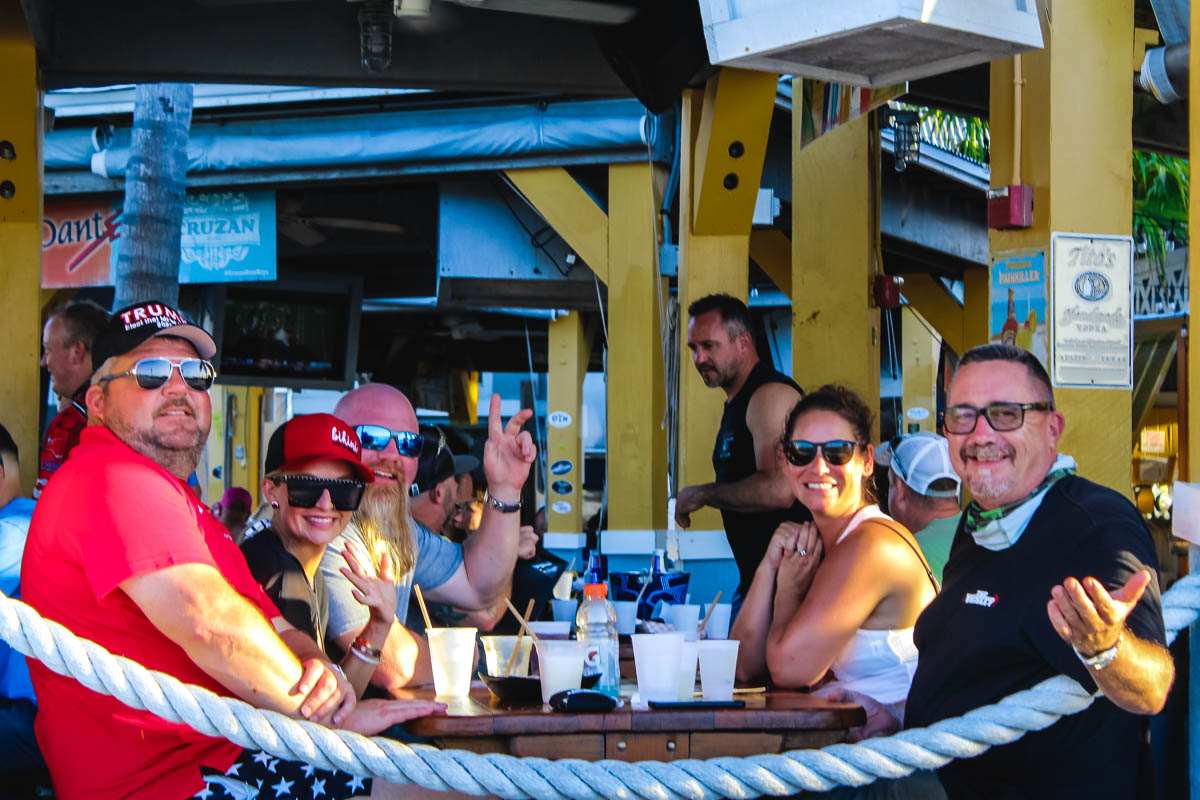 Finding the Fun ​
Despite the fact Lil' War Party was not on scene, a big party could be seen... and it stretched around every corner, cay and key. Fireball shots were flowing as fast as the stream of sunbathers into the party pool at Dante's day club and the usual craziness continued up and down Duval Street. Familiar faces continued to stagger past you at Rick's Tree Bar every 15 minutes instead of on the fives; live bands which now perform behind less than charming chunky plastic barricades were still wailing out the classics from the Hog's Breath to Irish Kevin's; and for the happier ending seekers, the Red Garter Saloon girls were gleefully taking tips in with their twins out, nonetheless noses and mouths were muzzled.

Because it's the main attraction for so many speed-driven aficionados, unfortunately the biggest blow of the weekend was the axing of the Offshore World Championships, but back on August 4th, Larry Bleil of Race World Offshore, (the entity that took over the series in 2019) was forced to call off the series finale for the first time in thirty years. On the bright side, The Worlds will return and all was not lost to the Luciferian fun snatchers of 2020, for once poker runners weren't bound to a Pier House VIP table or Outer Mole bleacher seat watching races all day, and had more party time out on the water around the Keys. 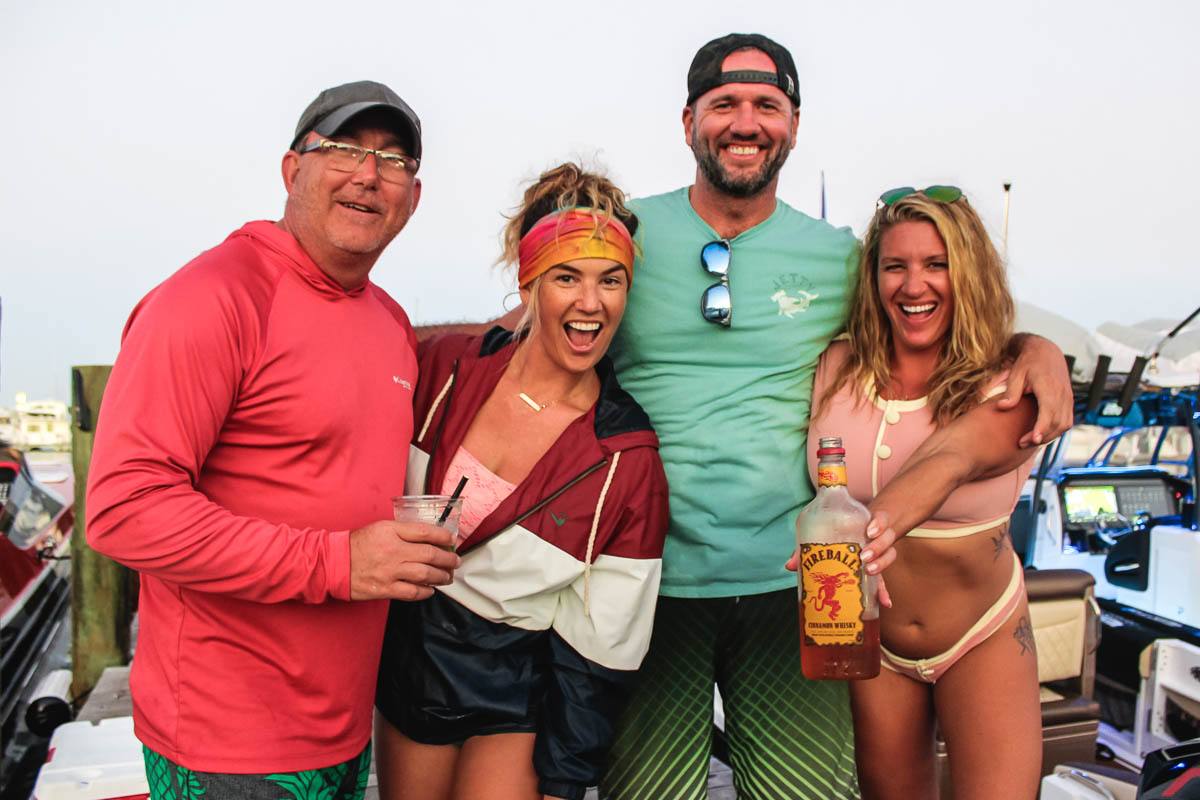 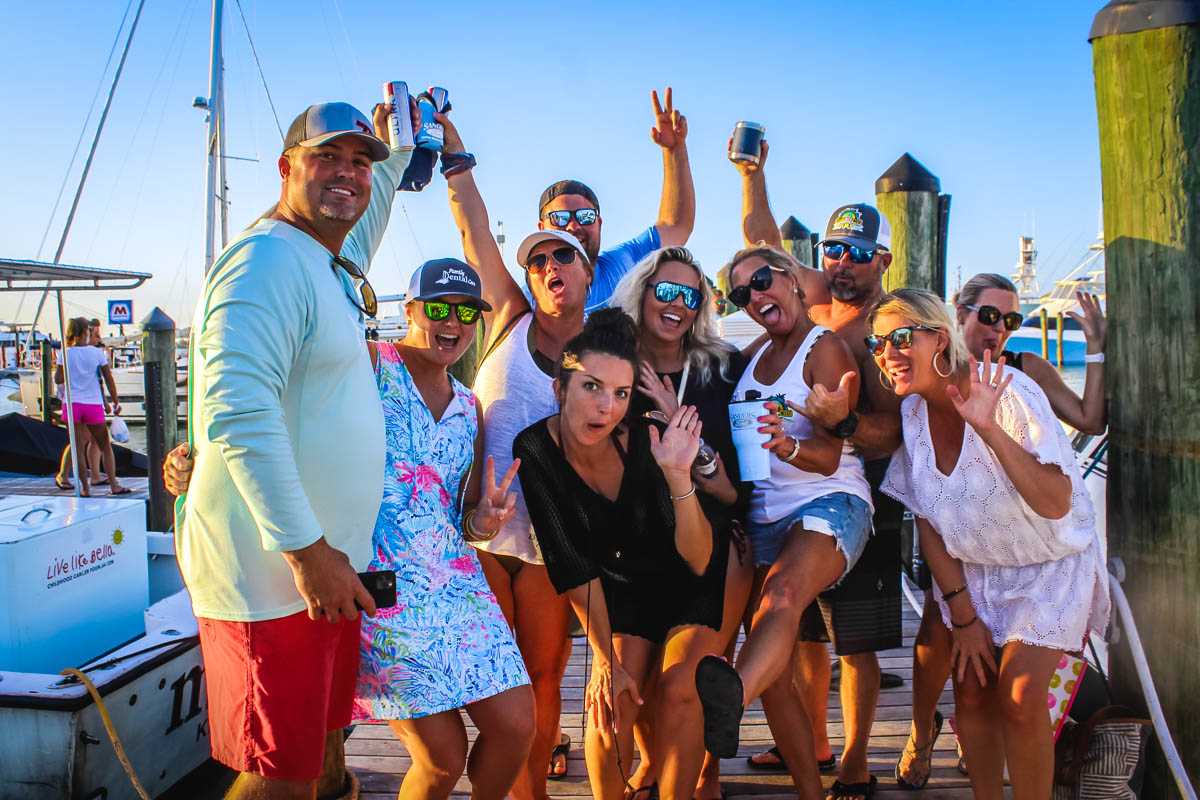 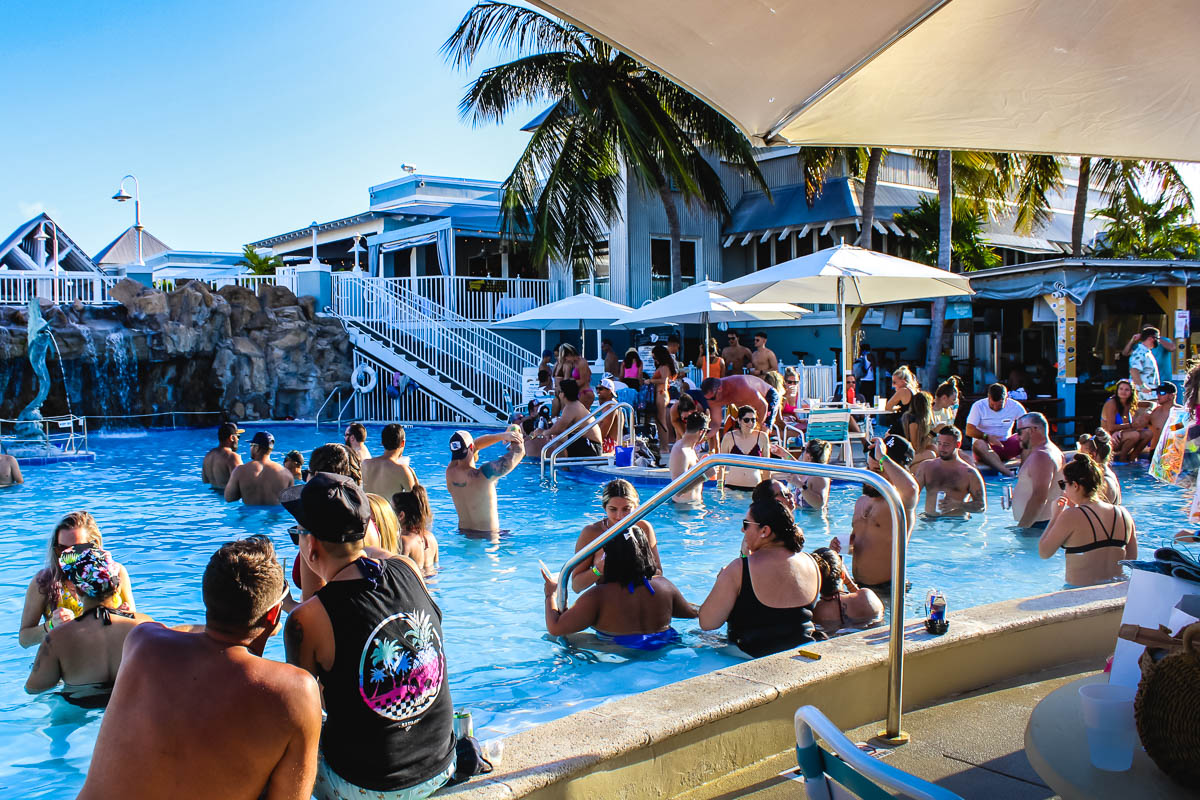 Having to wait two years thanks to Mother Nature nixing last November's aquatic affair, following the mid-day helicopter shoots on both Friday and Saturday wonderful Woman Key came alive with a pair of impromptu raft-ups – which were amazingly documented thanks to FPC member and drone meister Mike Boyle's National Geographic-worthy visuals.

One of the highlights of the weekend for me was getting to hang in the paradisiacal place with Roger and Pamela Anderson on the couple's Nor-Tech Easy Money II with their Destin-based boating buddies Hays and Karlyn Wilson. I had written about the 390 Sport, but had not previously ridden on it. All I can say is Easy Money II was money well spent; the solid-riding machine cut through the waves with utter precision and immediate obedience during our whirl out to and back from Woman.

When all was said and done, despite the rona ruining the races and Eta overstaying her South Florida welcome much like cousin Eddie on "The Griswald's Christmas Vacation", I didn't hear any complaints and Key West was still as wild and wonderful as always (and the cheaper room rates were a joy). Next up killing it on the slaughter meter for fast and furious fun will be the Miami Boat Show Poker Run and if I know Stu and Jackie, they will make it extra special, seeing that the show itself got sacked. 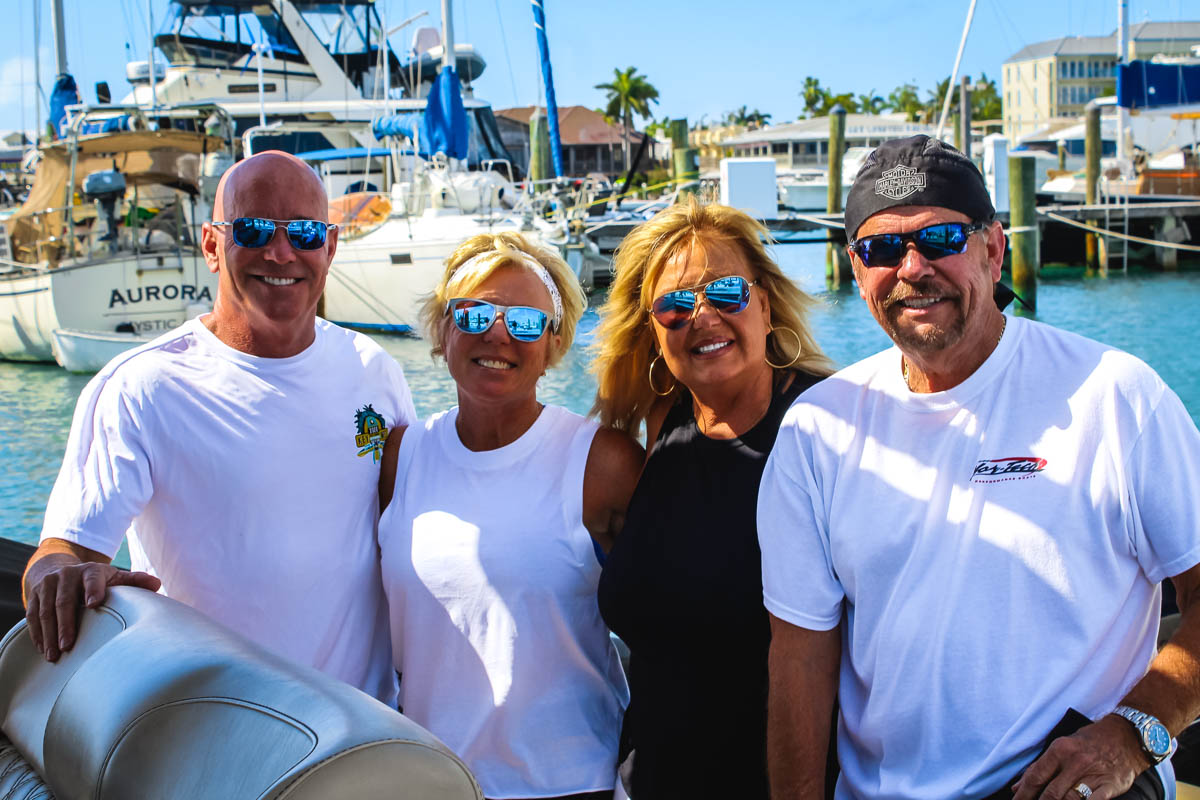 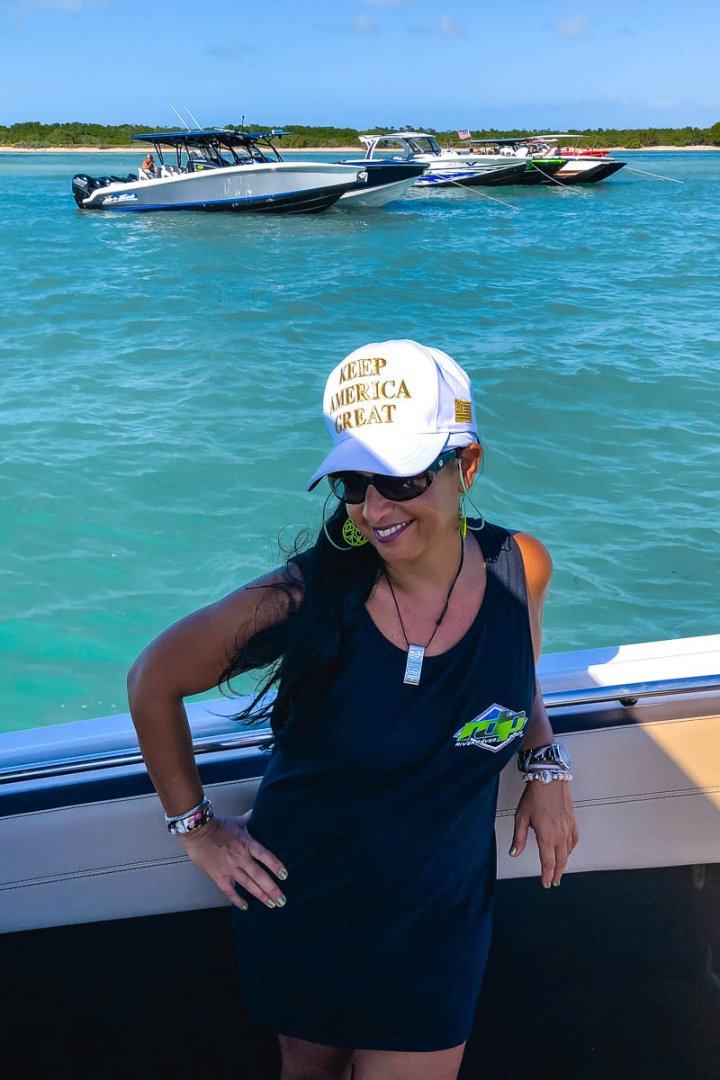 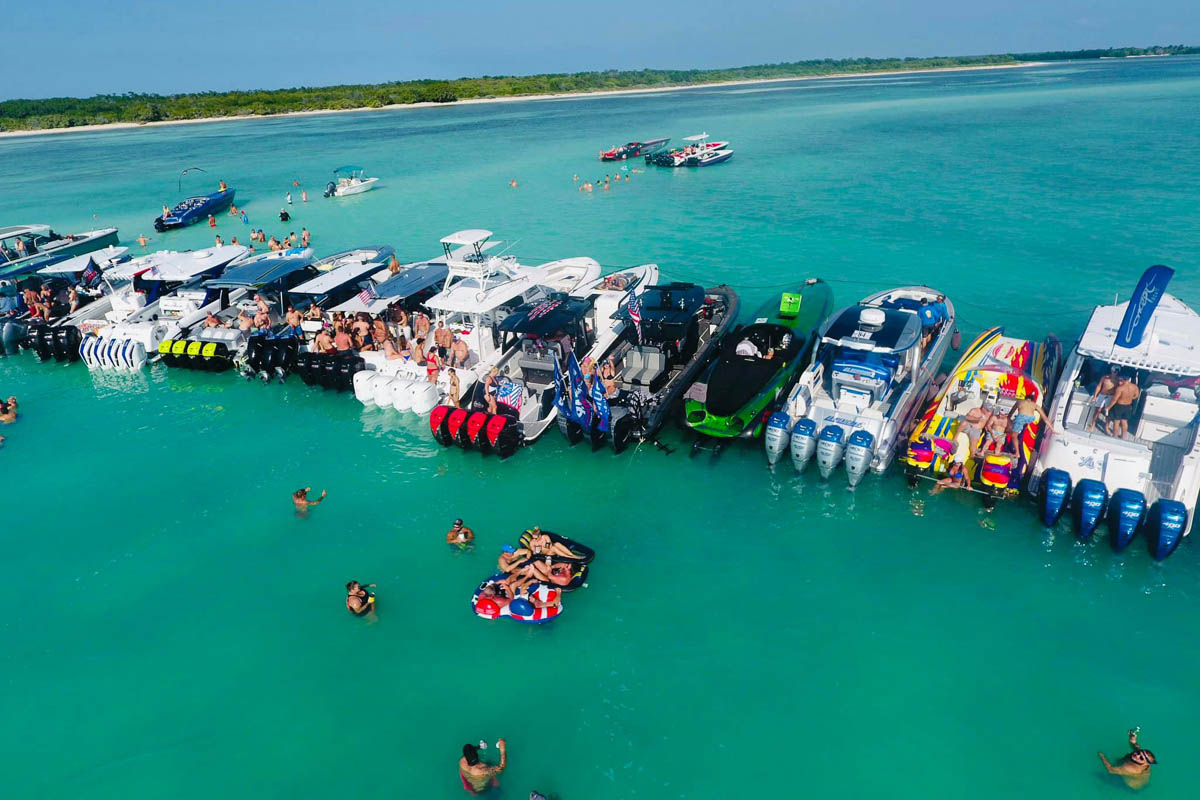 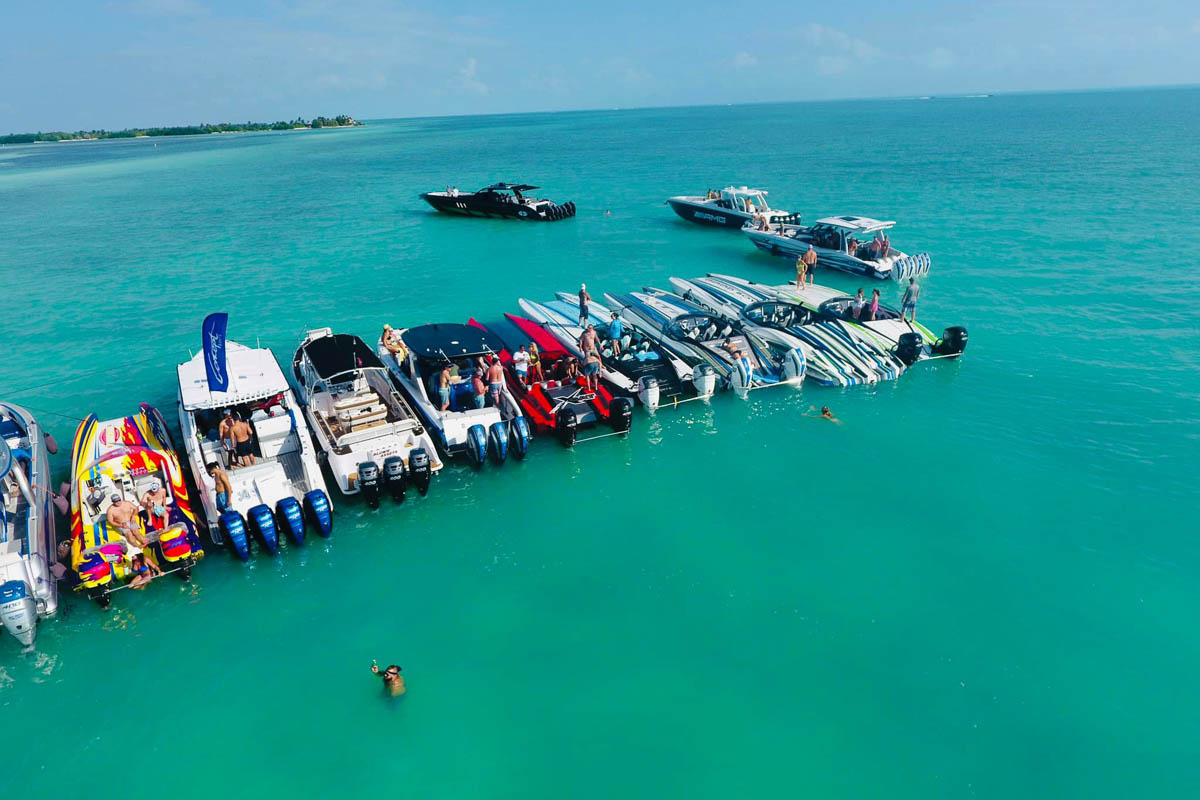 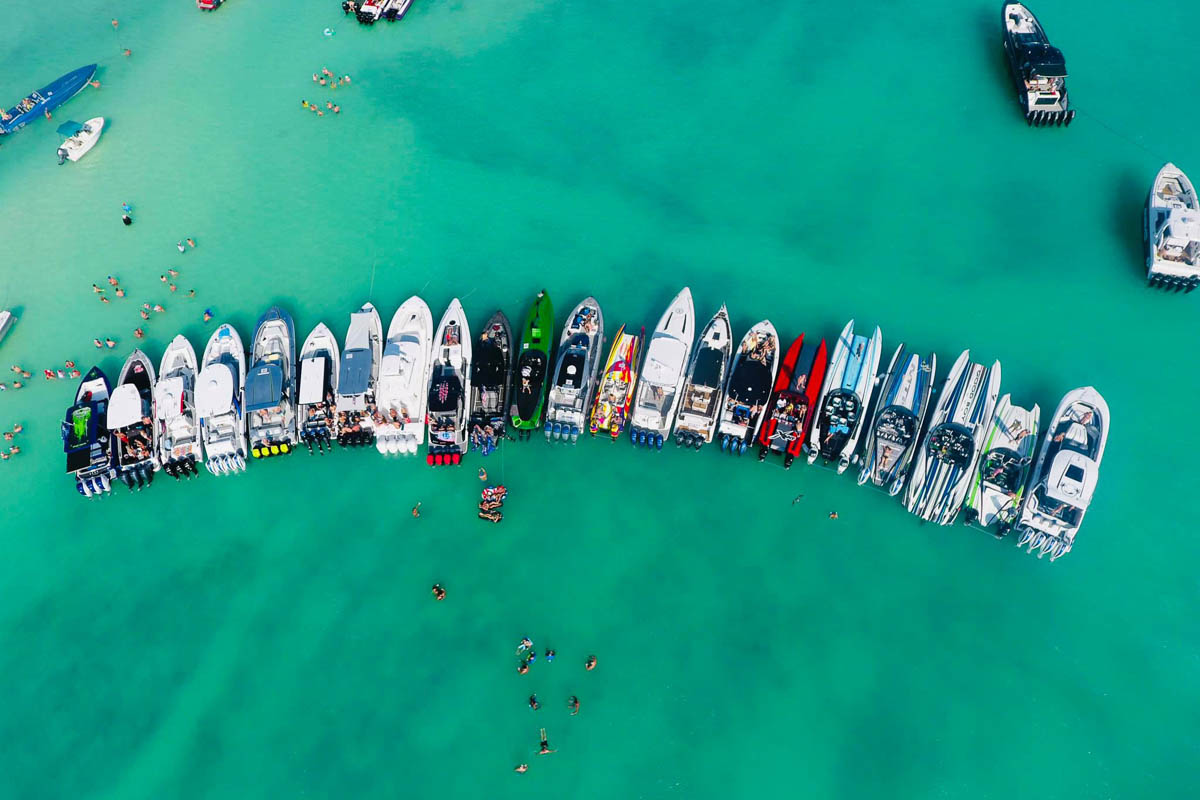 Bummed we missed it. First time we’ve missed it in 7 years (since our sone was born). On the bright side, already booked for next year!

great read Dina, as always quite the word wizard