Brad Carlson Seals the Deal With Sunsation 32 CCX Hull No. 100

Good, bad or in-between, the FIRST TIME is always unforgettable, just ask 34-year-old boater Brad Carlson. The Kansas City-native sealed the deal with a trifecta of "boating firsts" for his alpha-male memoir this February at the Miami Boat Show Poker Run, and the satisfying weekend of aquatic action in the captivating Keys went a little something like this...

1- First, to kick things off, as a new member of the Florida Powerboat Club Carlson went all the way – from Kansas to the east coast of Florida with four buddies to get a taste of what it's like running side by side with 100-plus exotic joyrides in his FIRST POKER RUN.

2- Second, as a fixture campaigning V-bottoms in the 40-foot range most of his adult life, the moment to mix it up arrived. Changing course and jumping into a luxury center console for the FIRST TIME, Carlson felt right at home behind the helm, happily cracking 86 mph with a mounted pair of 450s to the rear.

3- And third, minus a brief chilly October lake demo on the Ozarks, as you might have guessed, that mid-80s Thursday thrill-ride mentioned above was not only his premier time cruising in a console, but also the FIRST RIDE splashing his spanking-new Sunsation 32 CCX – Acquired Taste Too.

That weekend, I also added a few firsts to my 2021 agenda; I met the newest member of the FPC and set eyes on landmark hull No. 100 of the 32-foot adroit, attention-seeker face to face. When the Sunsation slid into Gilbert's back dock slip and the fine-mannered Midwesterner granted me permission to climb on for some pictures, whether feeling like talking or not, he sort of had no choice. The intense yellow entrant number 29 stood out in the crowd as the sun tucked itself swiftly under the horizon, but what I did not know was it's operator Brad Carlson, did too! 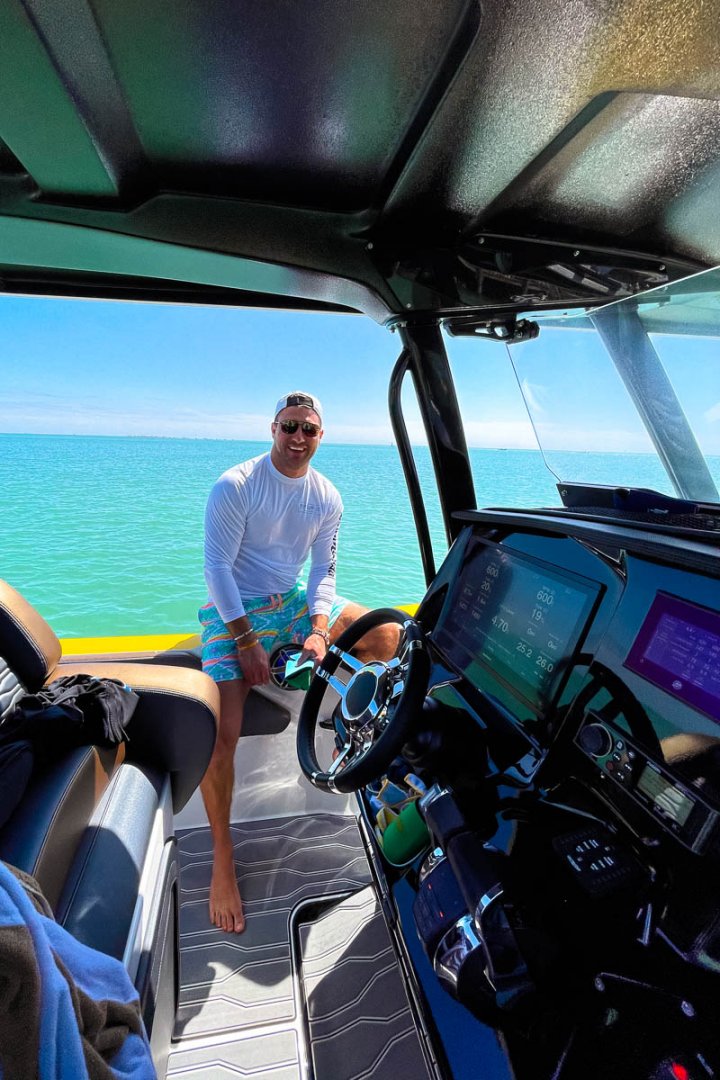 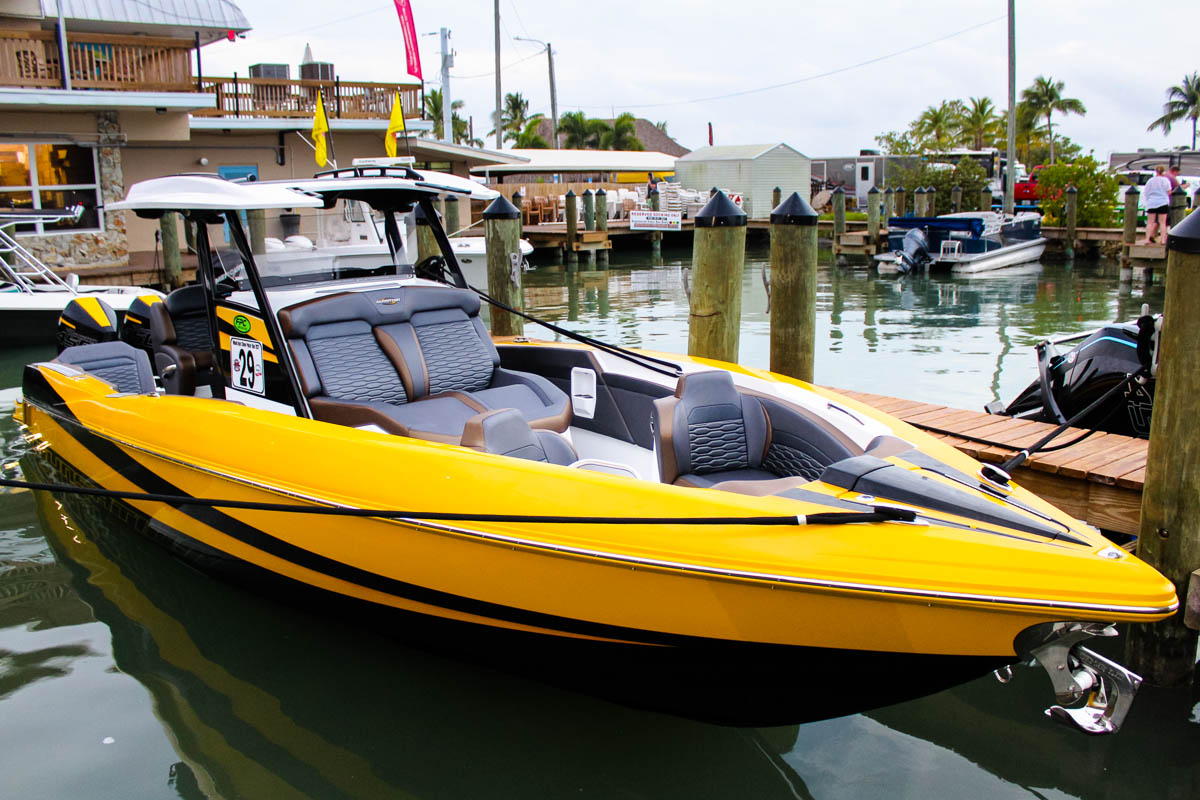 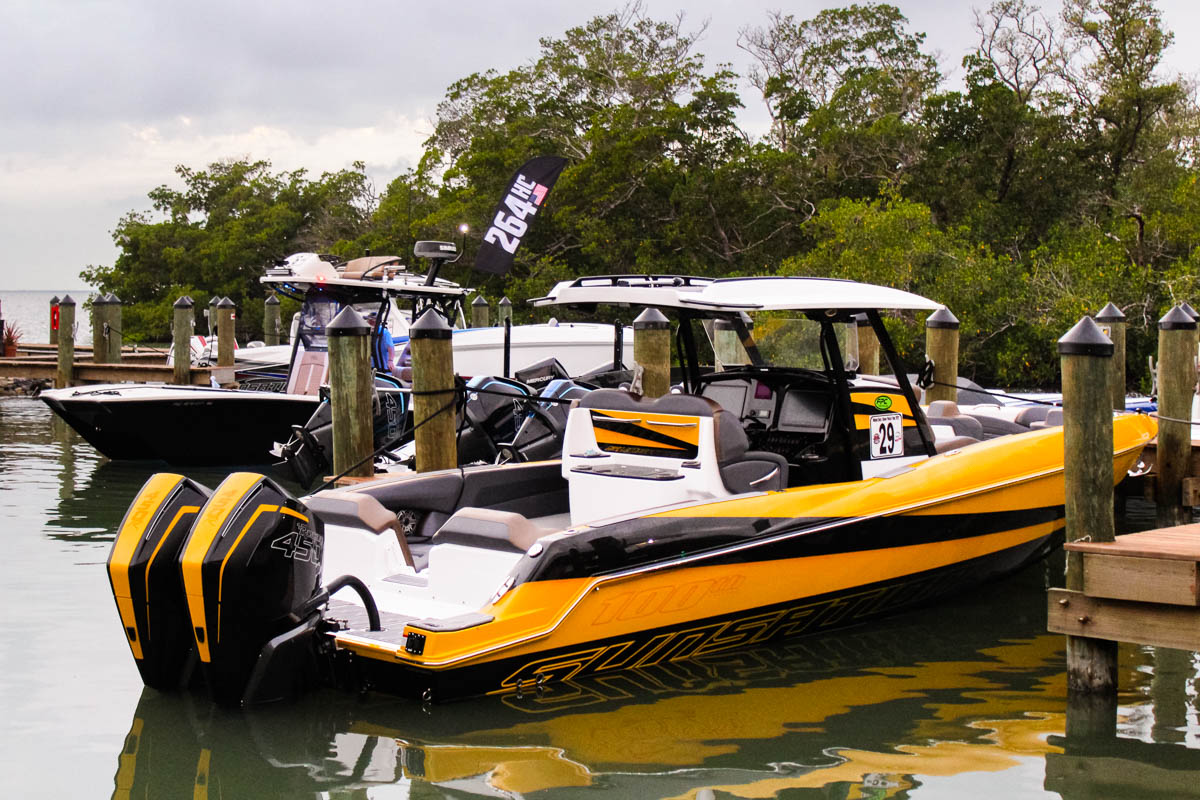 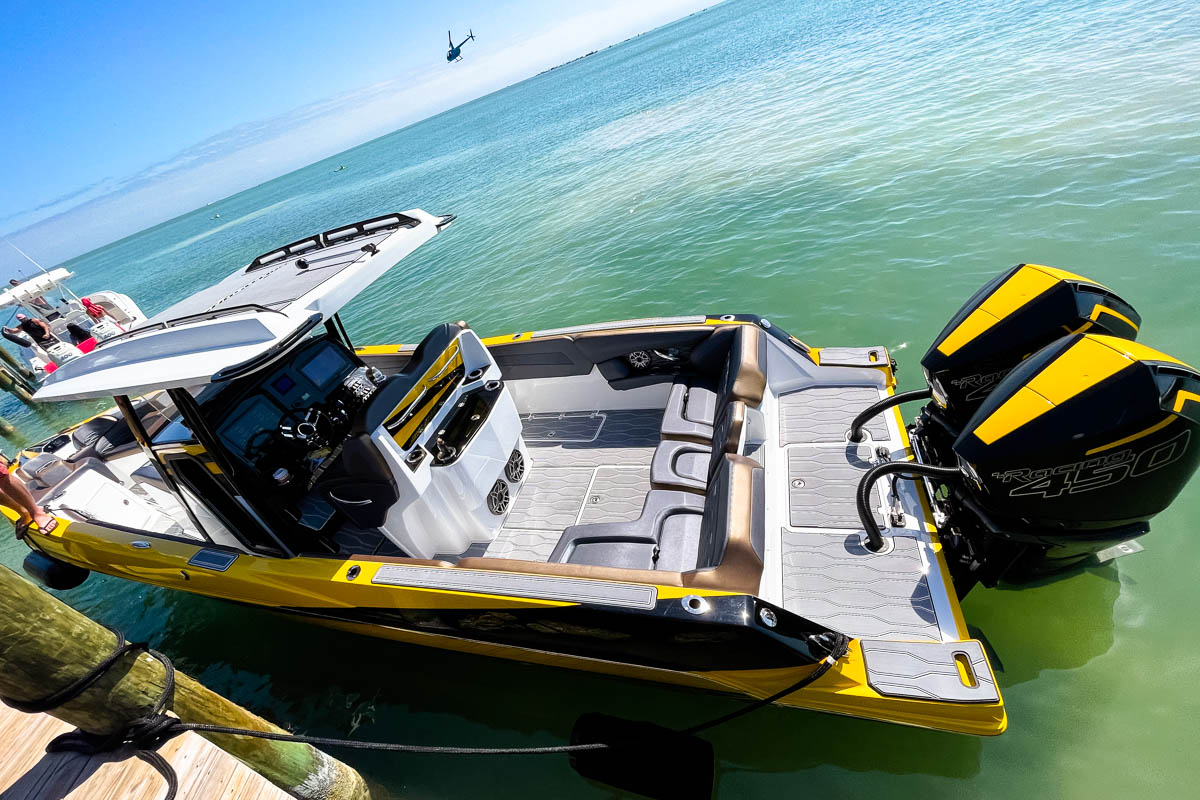 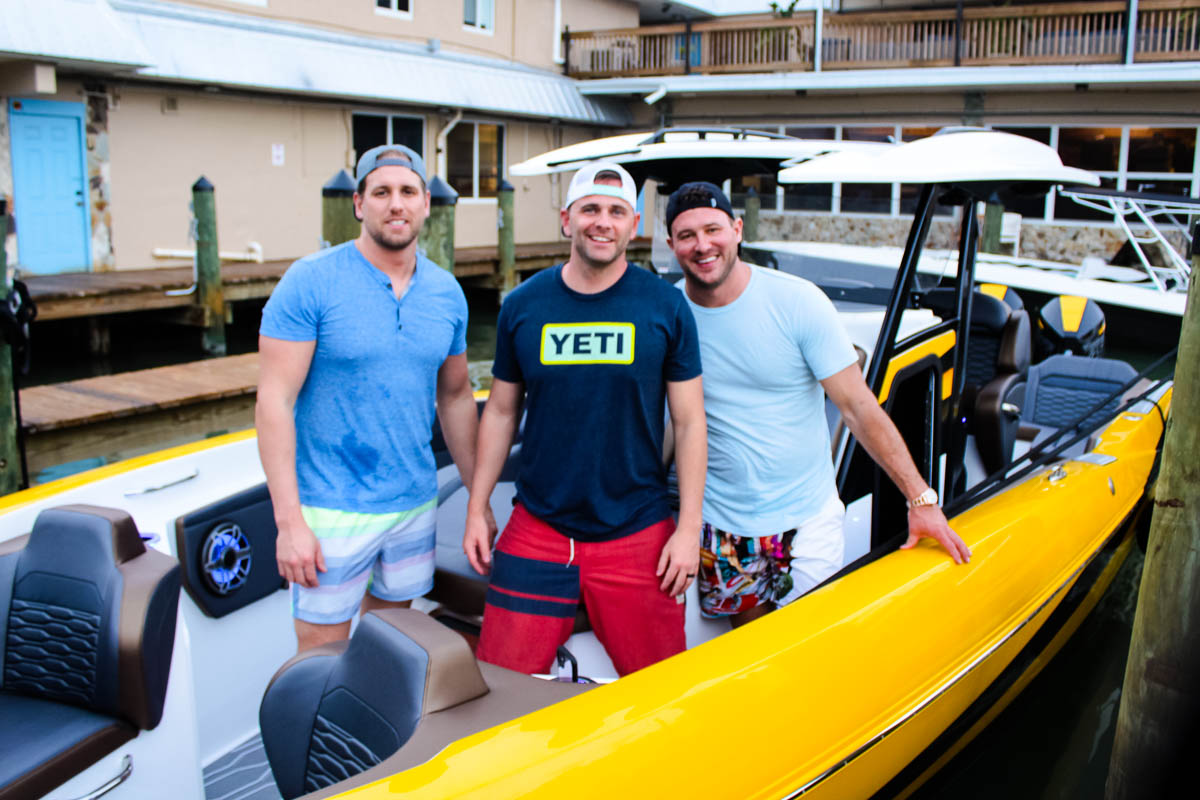 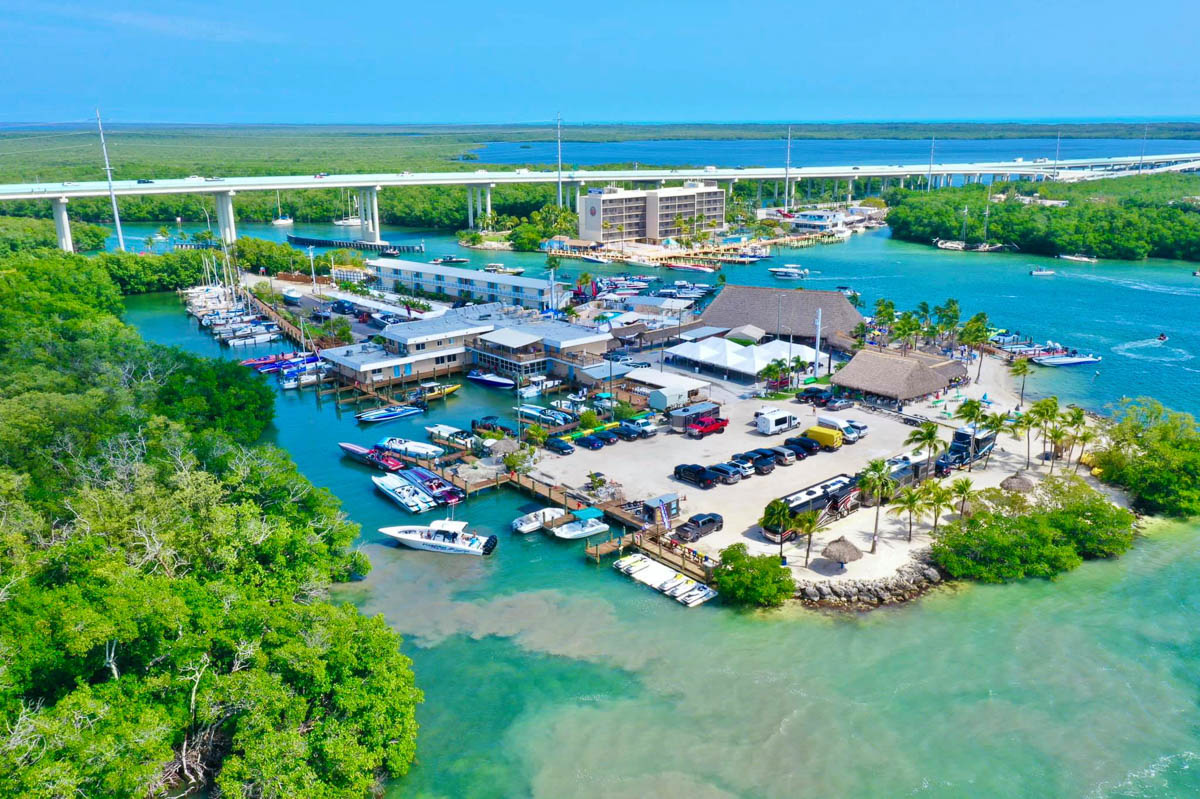 Well-rounded on the outside and grounded on the inside, Carlson is that guy you do a double take at for his corporeal beauty and commanding smile, but stay around for the intriguing conversation that follows. Once I could wrap my head around the companies Carlson controls, it's evident the go-getter is graced with a gift of intelligence; a talent for success; and a street smart side learned from the real world, not earned on a campus. Thanks to the entrepreneur's candidness, before reflecting on his big luxury center console score, I'm able to share a recap of his remarkable "rags to riches" (as he calls it) career evolution set in motion during his good-ole college days.

The "Empirical" Empire is Born ​
In between sophomore and junior year at Central Missouri State University when most kids split their time between frat parties, football games and midnight cram sessions, the 19-year-old and his best friend were preoccupied putting together a project on a more grandiose scale. With two grand in hand, the college cohorts launched two companies, one being MAG a large supplier of trucks to Fed Ex, and the other APEX, a manufacturing outfit. After much perseverance and eventual triumph cultivating prosperous dealings in varying industries, Carlson would go on to buy his partner out, and independently expand the enterprise.

Empirical Prime as it came to be called was developed into a privately held family-office that actively operates investment management of its own companies and assets. Its main focus is to grow, shape and retain the holdings or portfolio of operational companies. Over the years, Empirical Prime has achieved $300 million in revenue, and today a dedicated team of 100 employees oversees a series of eight entities in five fields including: commercial trucking, manufacturing, finance, general contracting and development.

When looking back at the young businessman's desire to grow his empire, even though Carlson finished his full four-year program, the senior was just three credit hours shy of officially graduating. The grounds for not finishing: "You don't need a degree to do well. In place of the piece of paper from CMSU, I’ve gained a PhD in real world business," is how he explained it to me. Earlier in the story, I called Carlson a go-getter and now I must add goal-getter, after hearing his future objective is to scale Empirical Prime to one billion dollars before turning 60; if anyone can do it, this capitalist can can!

Financial success has not come without struggle on certain fronts, particularly with family and free time. Per his parents' wishes, Carlson was to complete a business/construction management degree in hopes to one day take over the family's building company. Because of choosing a dissimilar career path, Carlson and his father Jim did not speak for three years, and a sense of abandonment and severe strain was put on their relationship for a decade, during which time, the workaholic was putting in 14 to 16 hour days sacrificing everything for professional success. Life has since gone full circle; father and son have resolved their issues, rekindled their love, and even better – returned to boating as a family.

Today everybody loves Brad and he doesn't need a Liberty Mutual insurance policy to do "his happy dance" (you know the TV commercial). Not only does he insist on making time for family and friends, he's proudly moved into the father figure role since his dad's unfortunate cancer diagnosis, and is now the one to take his parents and two older sisters on holidays. The good son also enjoys using the Sunsation to usher in the fun on those getaways; the progression into the 32 CCX came about like this.

A Sunsational Start for Carlson ​
Living two and a half hours from LOTO is great, but driving your friends' cruisers when you're at the lake gets old after a while, hence, Carlson signed on for his own Fountain with a pair of staggered 500s under the hatch. The adolescent-looking owner held onto his 42-footer Not My Dad's Boat for four years, but was not always pleased by the stern-drive-powered V-bottom's frisky behavior. A 38' Sea Ray Cruiser where he could pile on the crew was his next purchase before Rusty Williams from Performance Boat Center introduced him to the world of luxury center consoles, specifically re-routing him to Sunsation, even though the idea of an outboard cat crossed him mind and is still clawing at him.

"With the center consoles, I didn't know what I was getting into, but Sunsation Powerboats is nothing but first class. I was building race cars with my dad since I was four years old, and drag racing them by the time I turned 12. This made me into a fit-n-finish freak and the reason I was drawn to the brand was for its quality and correctness." He continued with, "Rusty does a good job marketing. Last June, he knew I was very impatient and really was interested in one, luckily he found the 32' which was in the process of being built. It was also special because it was the 100th hull for that model. I had one week to make all the decisions and then took delivery in October at the Ozarks. Not only did Rusty recommend the boat, he also suggested we come down to do the Florida Powerboat Club's Miami Boat Show Poker Run. So, here we are." 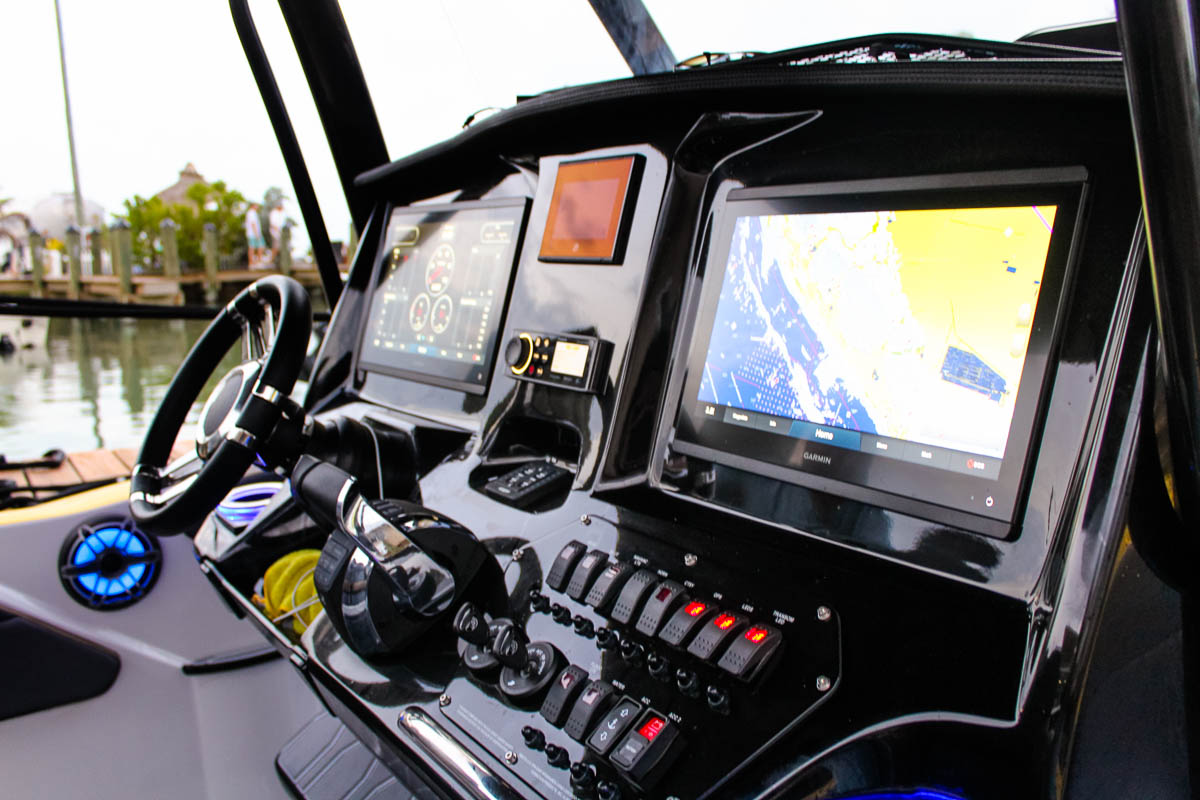 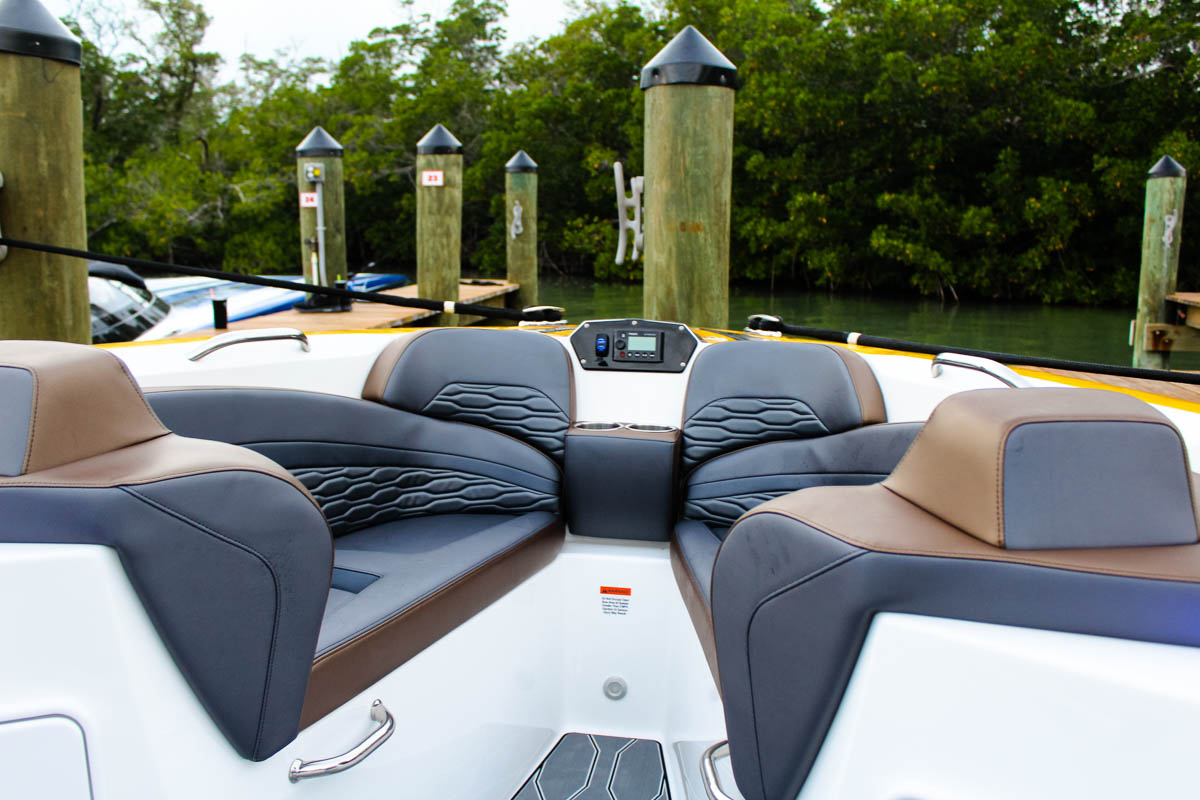 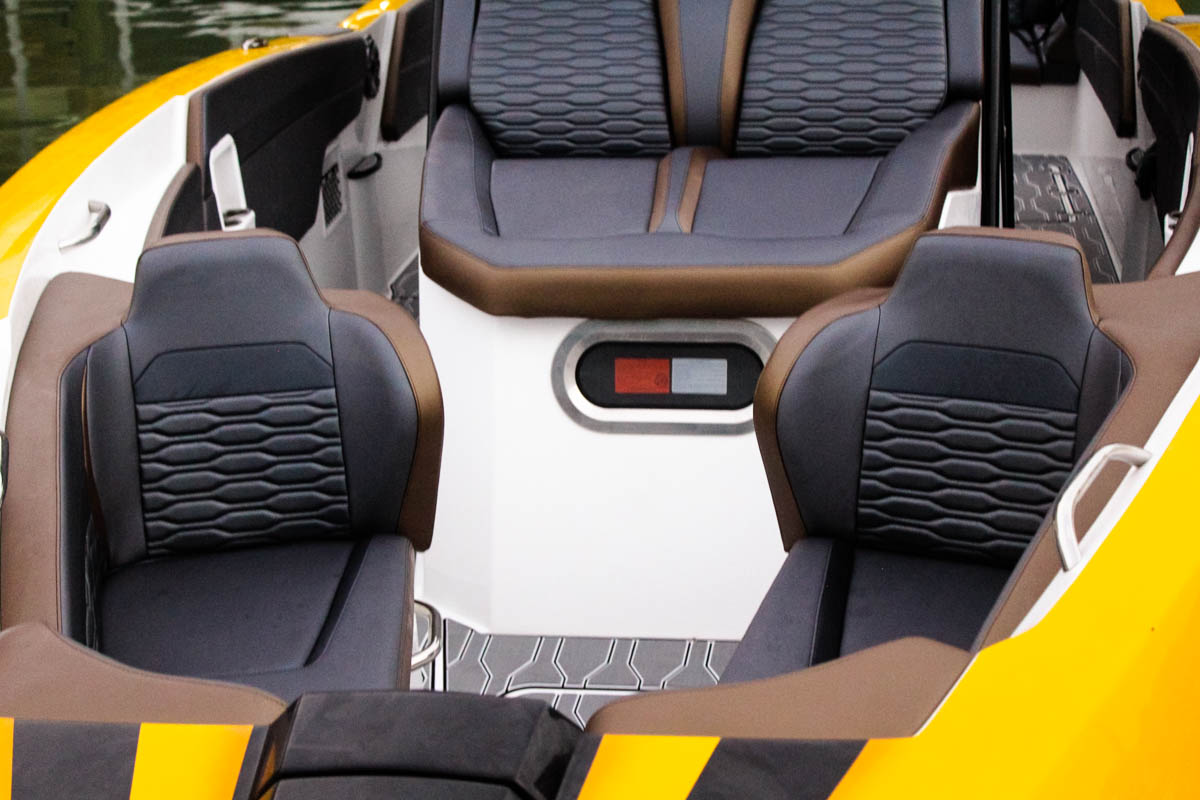 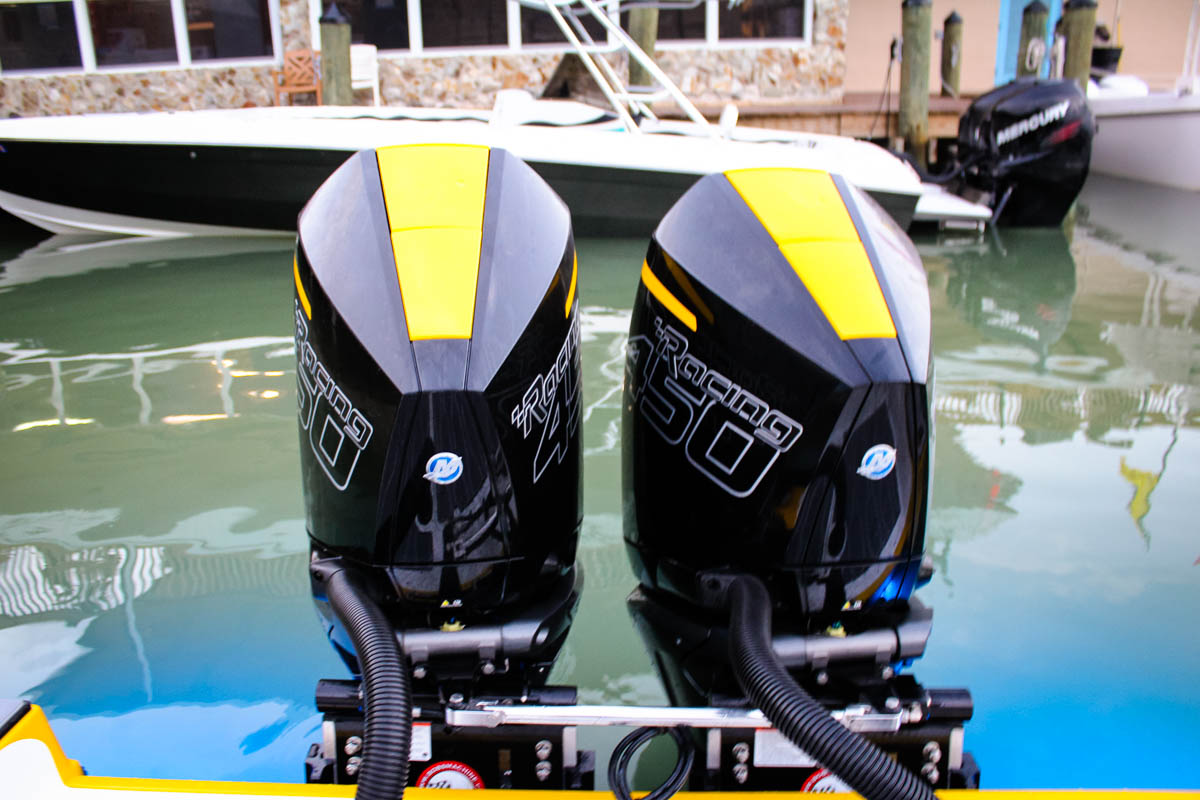 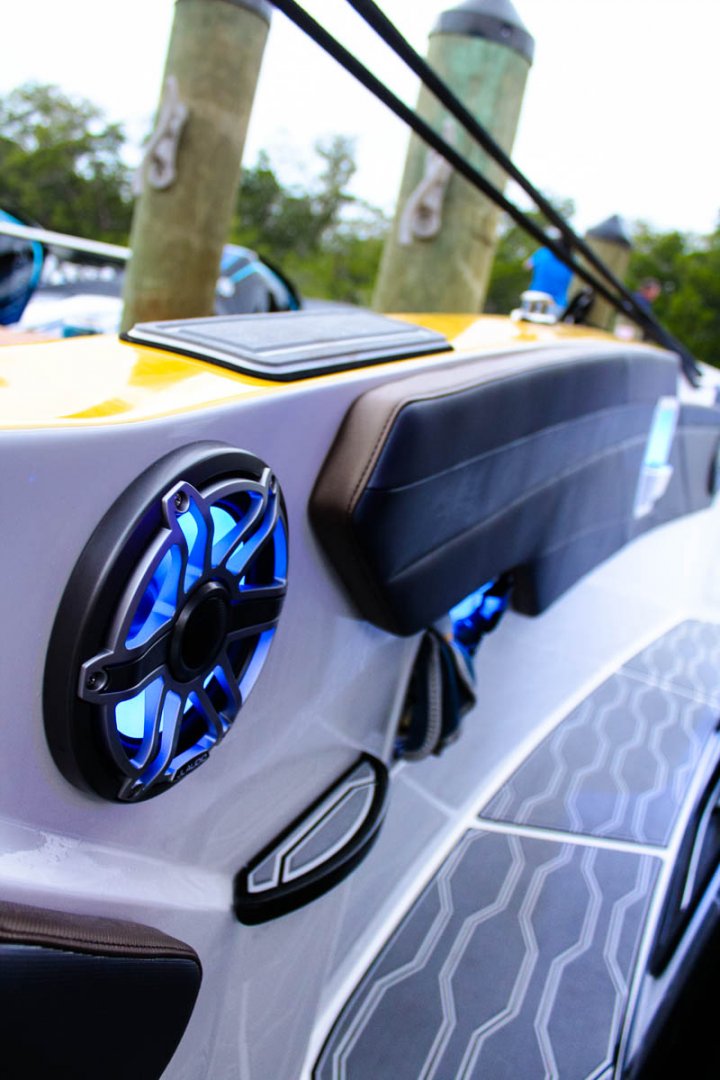 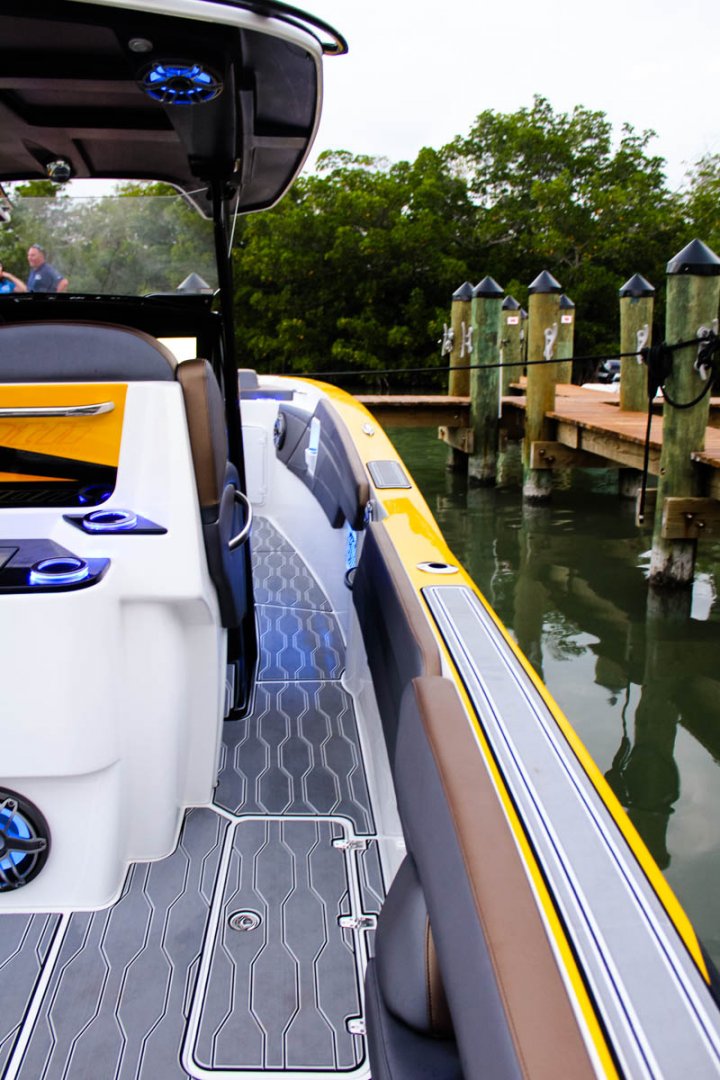 Grilling Carlson on the color combo because you just don't see many yellow and black beauties such as his, he divulged, "Lots of our brands are black and gold and I love the color combination, as well as black and yellow, so I went with it. It's cultured and classy." No doubt his four hometown friends Blake, Michael, Tyler and Zach agree and were happy to join him on Acquired Taste Too's maiden voyage, even if a couple had to settle for renting a U-Hall due to the lack of cars available when arriving to Miami.

Drilling Carlson next on the biggest take-away from his first poker run weekend after christening the new craft confirmed the obvious... he is not only street smart, but also sea smart, and could already see when slamming up and down swells in the snotty stuff – size matters! "At some point I will probably need to upgrade, part of the reason being for safety measures when my parents are on the boat. I don't want my mom Dea getting tossed around and I know a bigger boat will help with that." That didn't take long!

And his second take-away was simply realizing how much Florida, the funshine capital of the world, has to offer. When the poker run wrapped up, Carlson headed over to Naples to connect with his family. Needing little convincing after another superb week on the west coast, Carlson was already planning an upcoming return. The Sunshine State and the luxury center console coterie of boaters are happy to have him along for the ride! 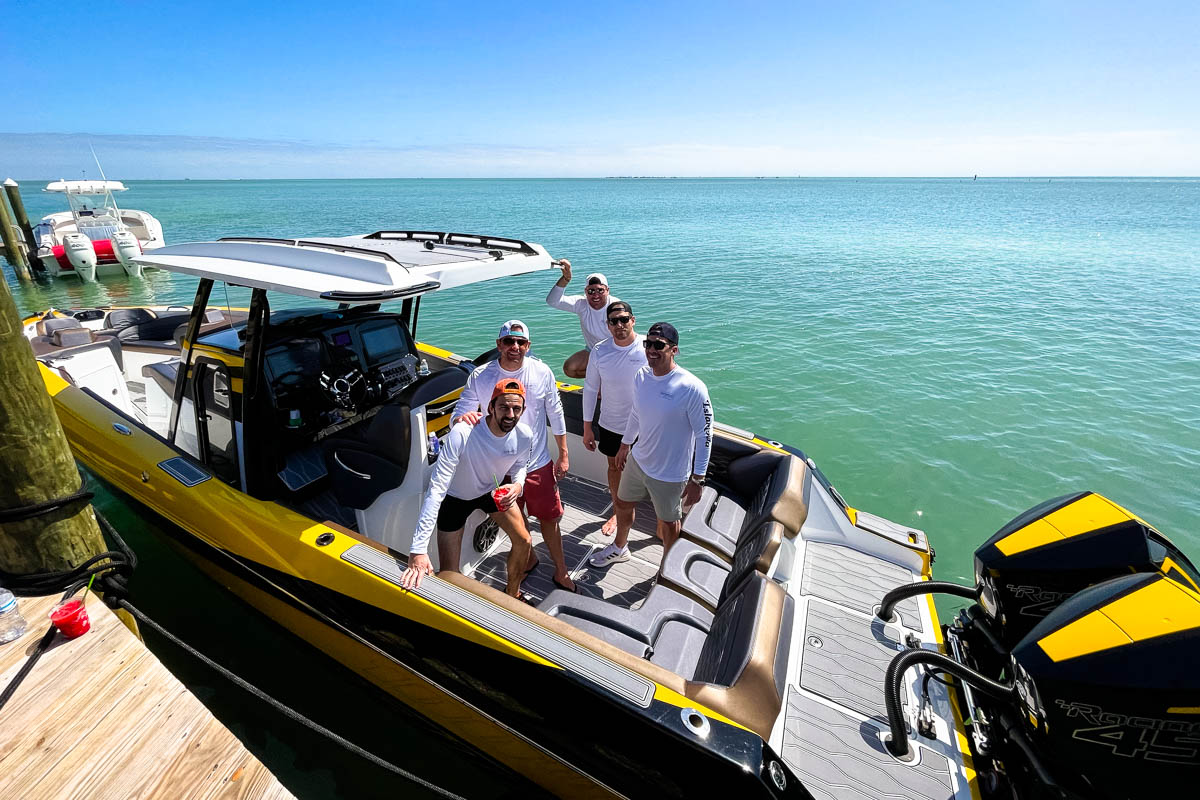 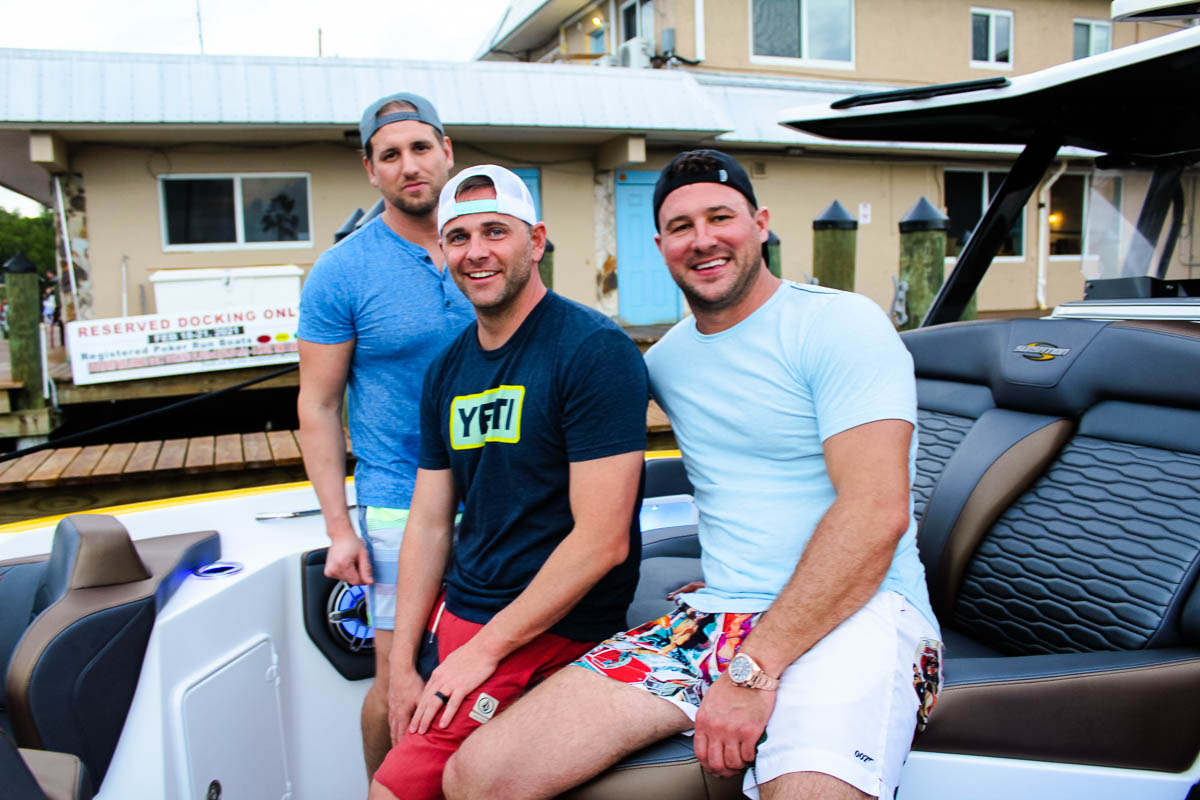 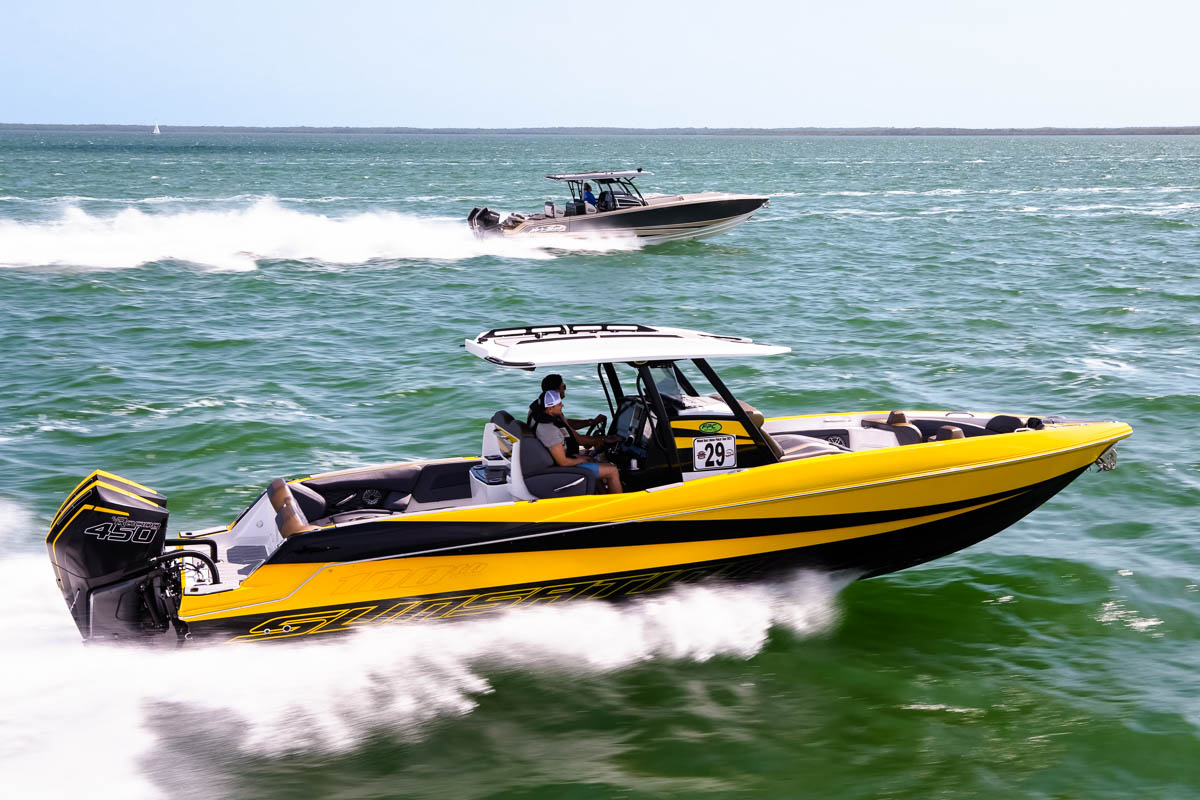 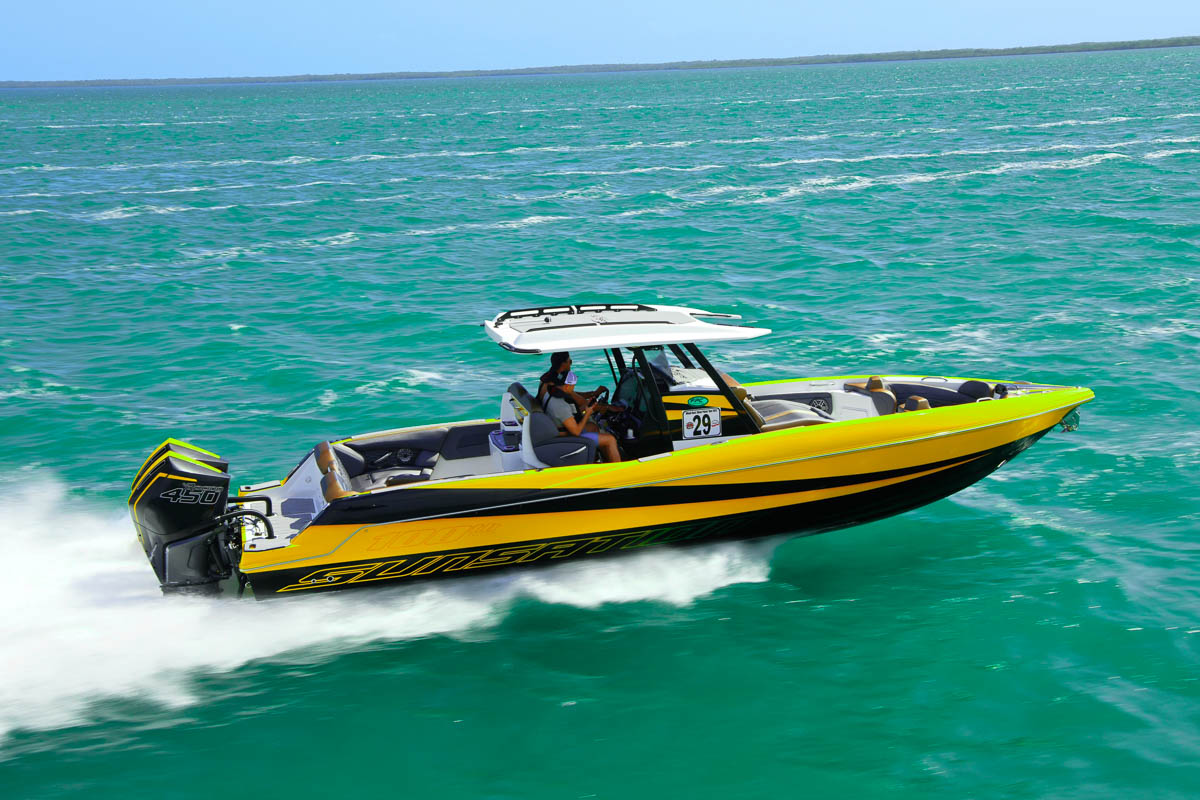 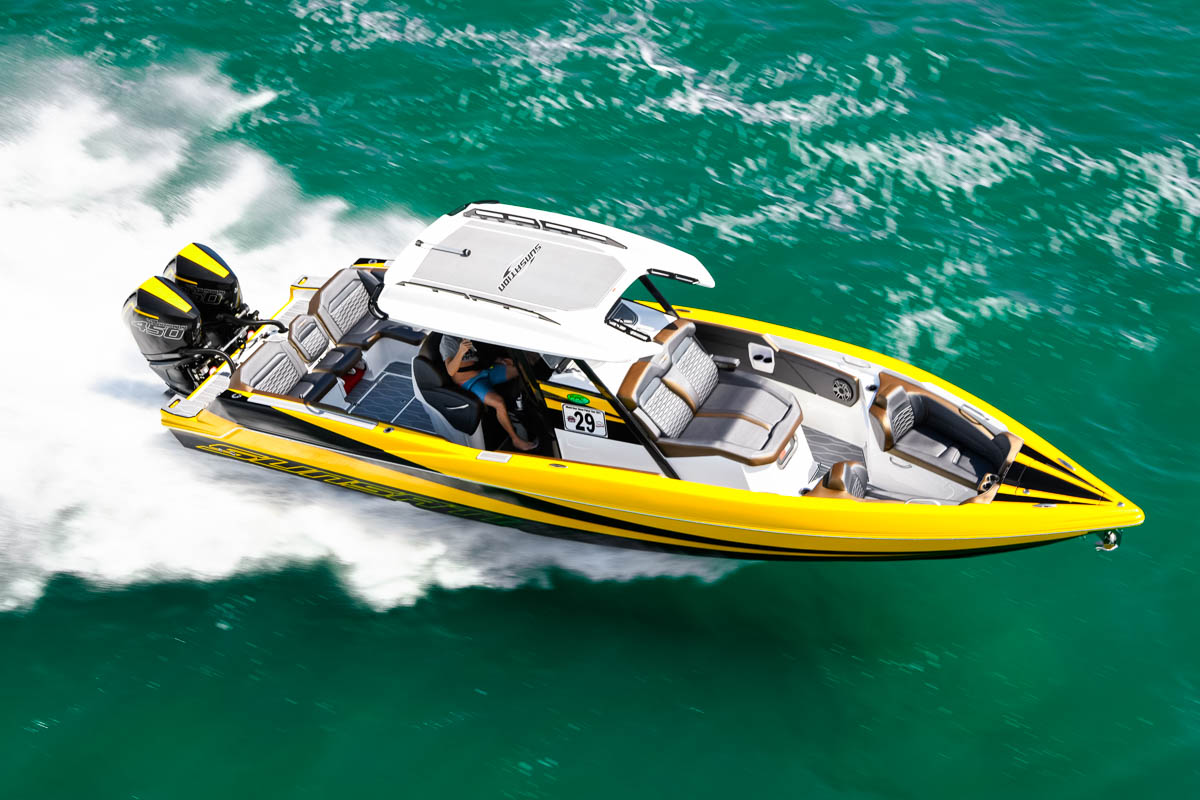