Article Gallery
Story by DinaRella / Photos by DinaRella and courtesy of Deep Impact​
No need to be certified in Google Analytics to know the aim of any profitable business website is to persuade its visitors to drop some dough, donate, download or as you may or may not have guessed -- design a deluxe custom-made Deep Impact center console.

Inviting and user-friendly, the Deep Impact website single-handedly makes building your water warrior a one-of-a-kind, unforgettable experience, but after chatting with powerboat enthusiast turned proprietor Mark Fischer, his cordial and convincing character will really seal the deal and make you want to add one to your backyard dock or vacant trailer in need of a new big-boy toy.

Since Fischer took over the reigns in 2014 and Black Water Boats founder and revered boat builder Eugene Uriarte signed on to sort out center console production, the team have drummed up such an array of tailor-made customizable offerings that you may wind up purchasing two.

The first question to ask yourself is..."To cuddy or not?"

Luxurycenterconsoles.com gives you 6 reasons in favor of swapping out that frontal seating area for a V-berth, head and galley built to fit within the contours of the bow, if your boating style heavily revolves around any of the below referenced characteristics.

1. Overnight stays - Do you long for drifting off to sleep by the rocking of waves under the stars? At the end of the day you can anchor out and not have to worry about returning to land.
2. Siesta Time -- After a hard week at work, a long day of fishing or playing with the kids in the heat of the day, maybe you want to escape for a sleepy afternoon siesta.
3. Escape the rays and/or rain -- Has the weather turned on you or there is not a cloud in sight and just want a few air-conditioned minutes away from the beaming sun.
4. Hotel savings -- If money matters, you can save a fortune if you opt to stay on the boat rather that a hotel. Just think November in Key West at the poker run and offshore races. I don't have to tell you the going rate at the Pier House or Galleon during that stretch of time.
5. Enjoy marina overnighters -- Party on the pier and spend the night on the boat along with your dockside mates. And an added benefit, wake up and you're all already on board and ready to go.
6. This last one may be a no-brainer but... with the cuddy you have a safe place to store fishing and snorkeling gear, luggage and supplies.

Currently, Deep Impact center consoles are offered in a 360 Sport and 399 Sport which feature an open bow and a smaller cabin in the center of the vessel, as well as the 360 and 399 Cabin (or cuddy as many call it) which include the enlarged lower forward cabin and head. A 499 Sport is in the works, which I can only imagine will be a jaw-dropper showstopper.

In this review the 399 is the star and you are the boss of how you want her to shine. Tone it up like a rock-star as many current high-performance powerboat customers generally do dipping into the vibrant Deep Impact signature Lamborghini orange or other flashy color combo pairings, or keep it calm and classy like boaters often do who are purchasing a pleasure craft or yacht tender and appreciate a more minimalist aesthetic. 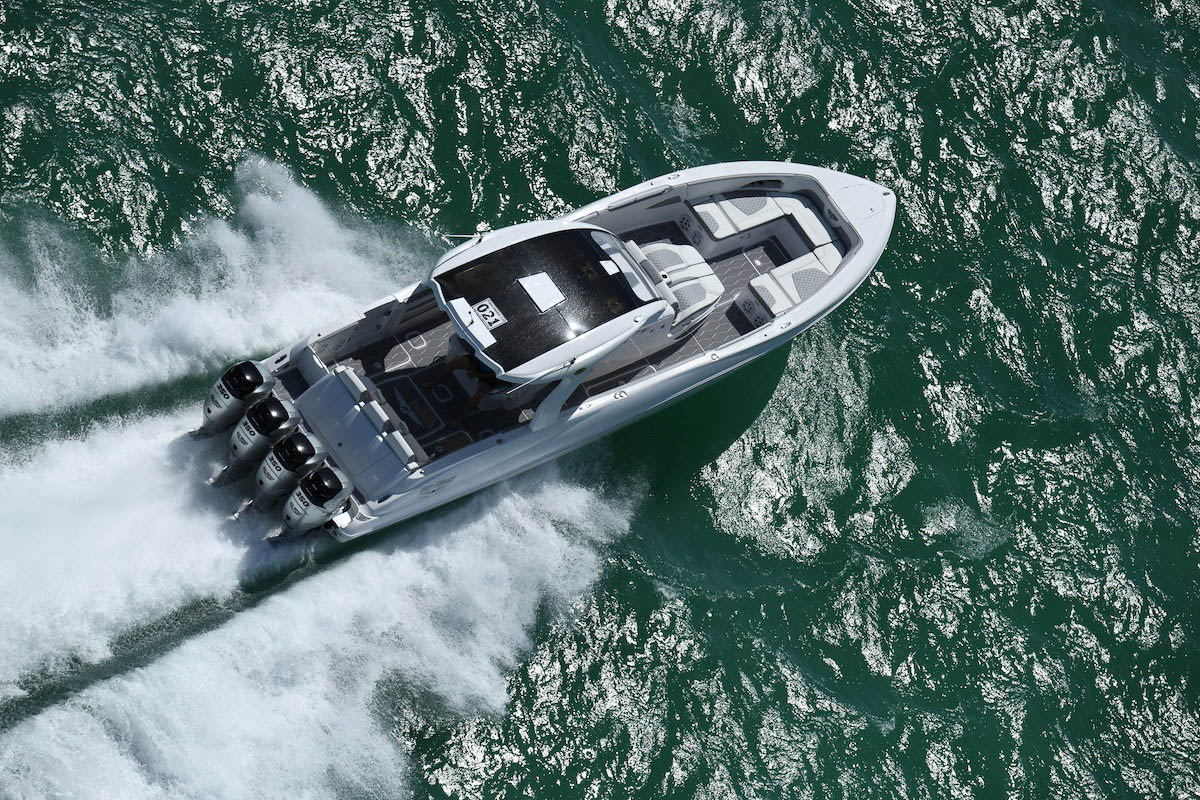 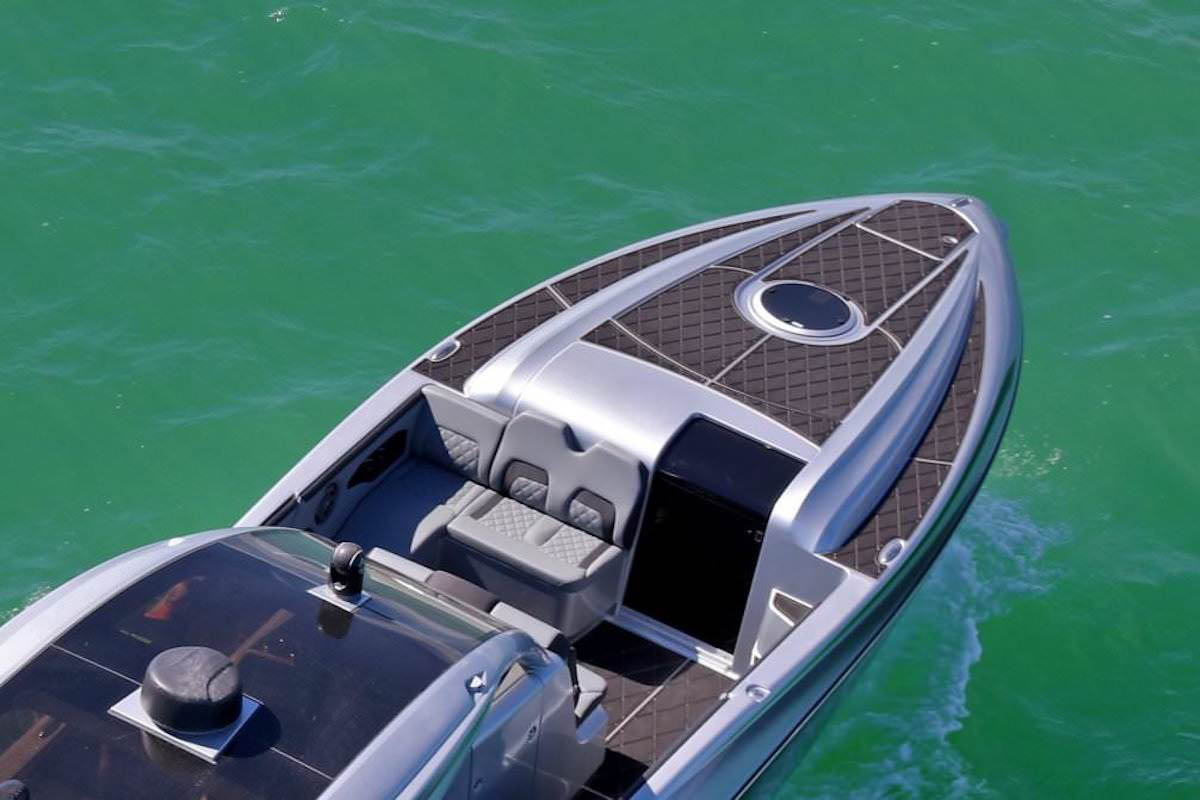 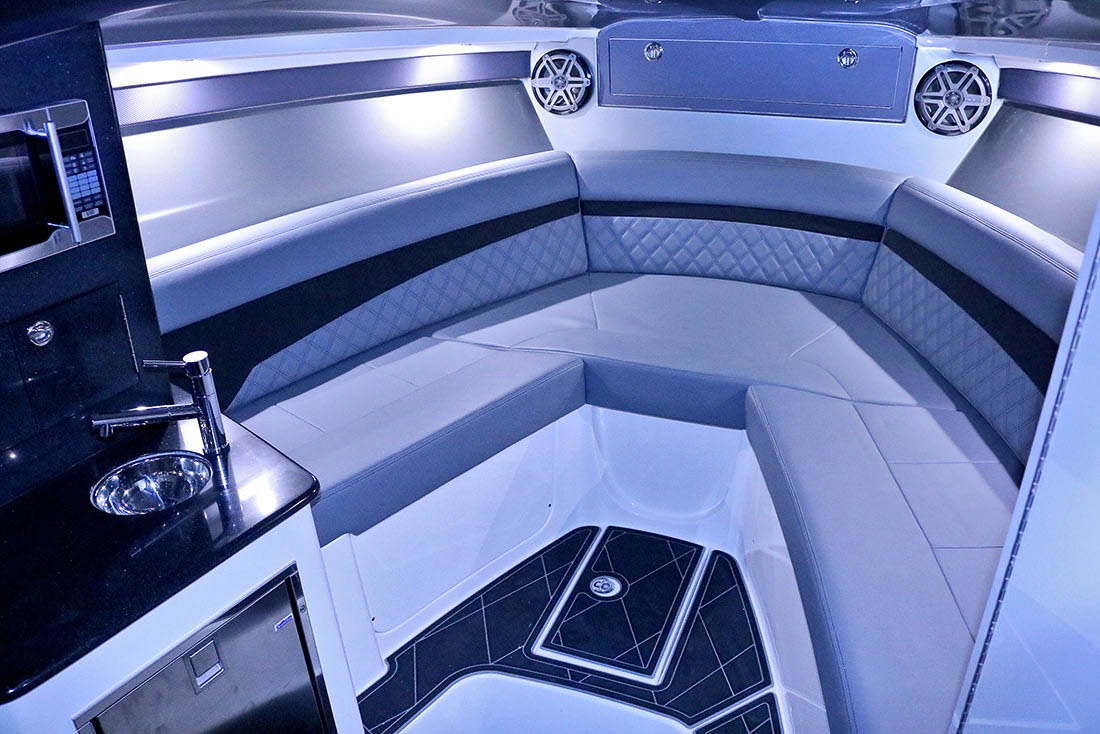 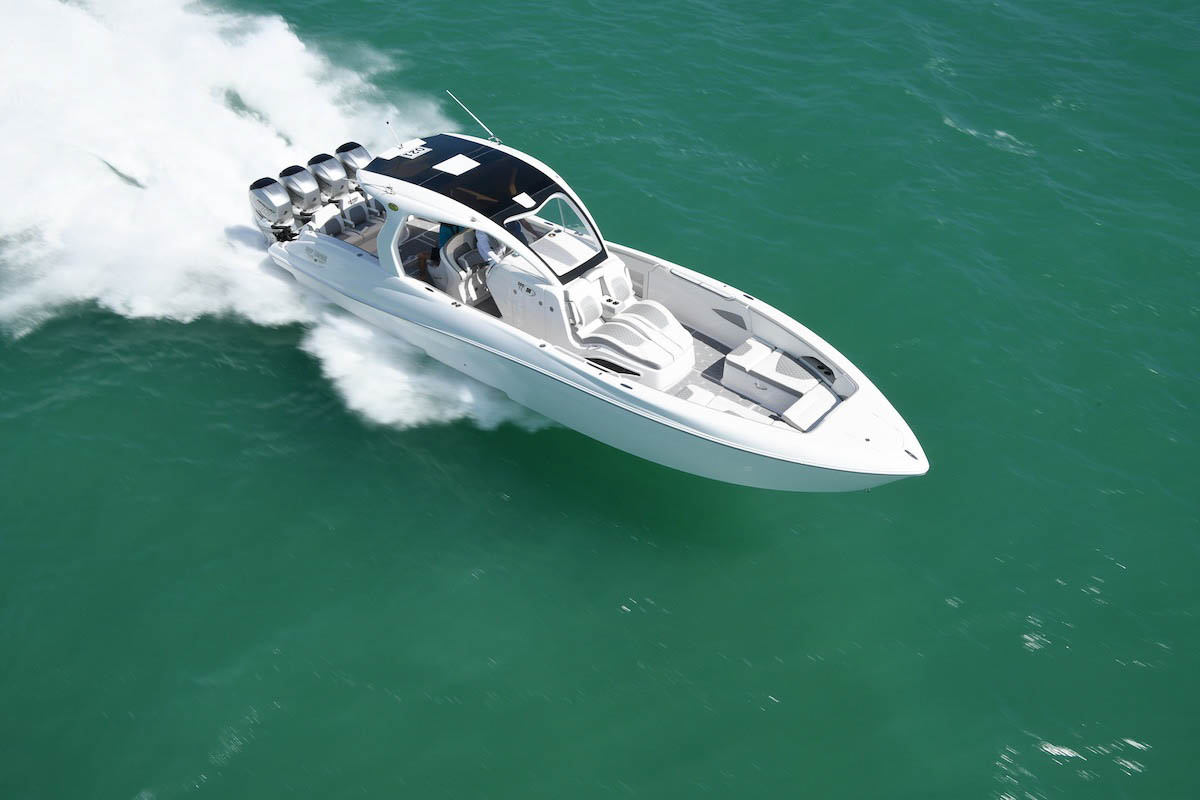 No matter your paint palate, your pin-up will outperform the competition because when the curtain opens its show-time on the liquid stage... the multi-step hull creates a cushion of air under the surface to reduce drag. By combining this with 24 degrees of deadrise at the transom, it yields solid running results when hammering through wind and waves.

Dressed with four Mercury Marine 350 Verados, expect to reach 75 mph and up the ponies to Mercury Racing 400Rs and watch the grin on your face grow (and everyone else's too) as the speedo ascends to over 80 mph. It is also possible to go with a set of triples on transom. 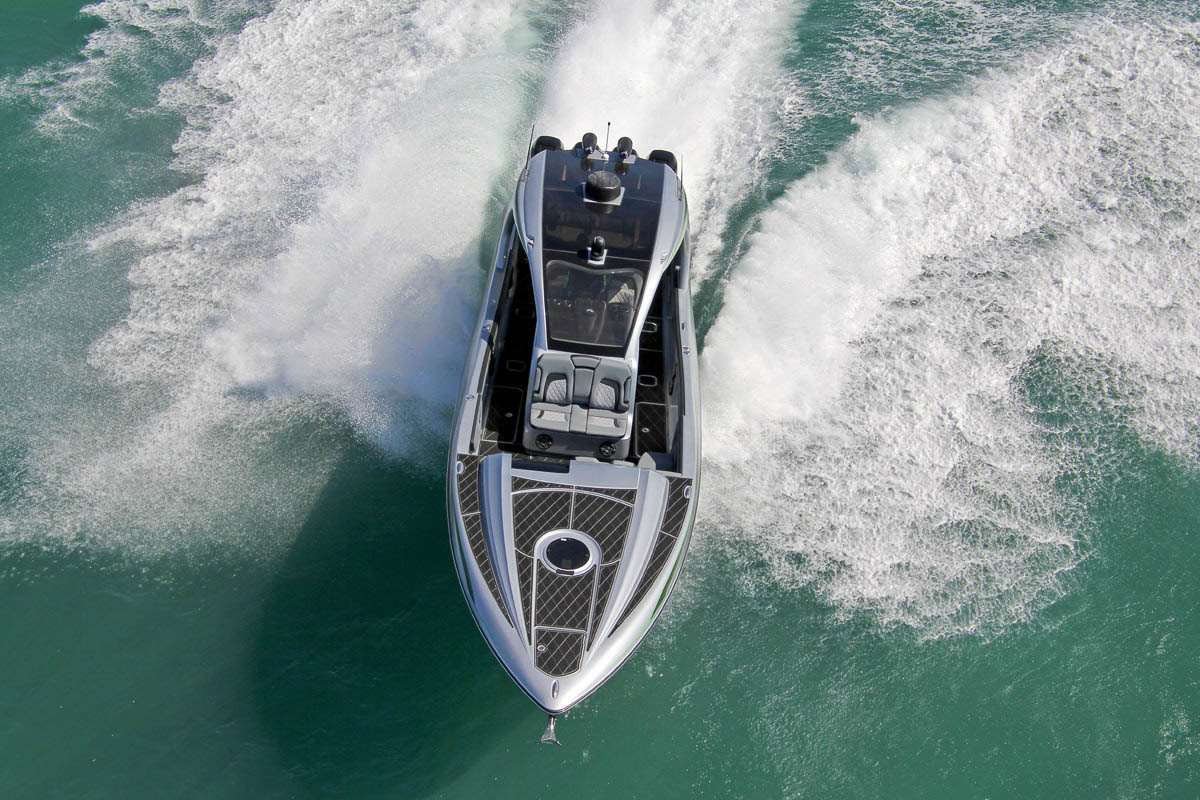 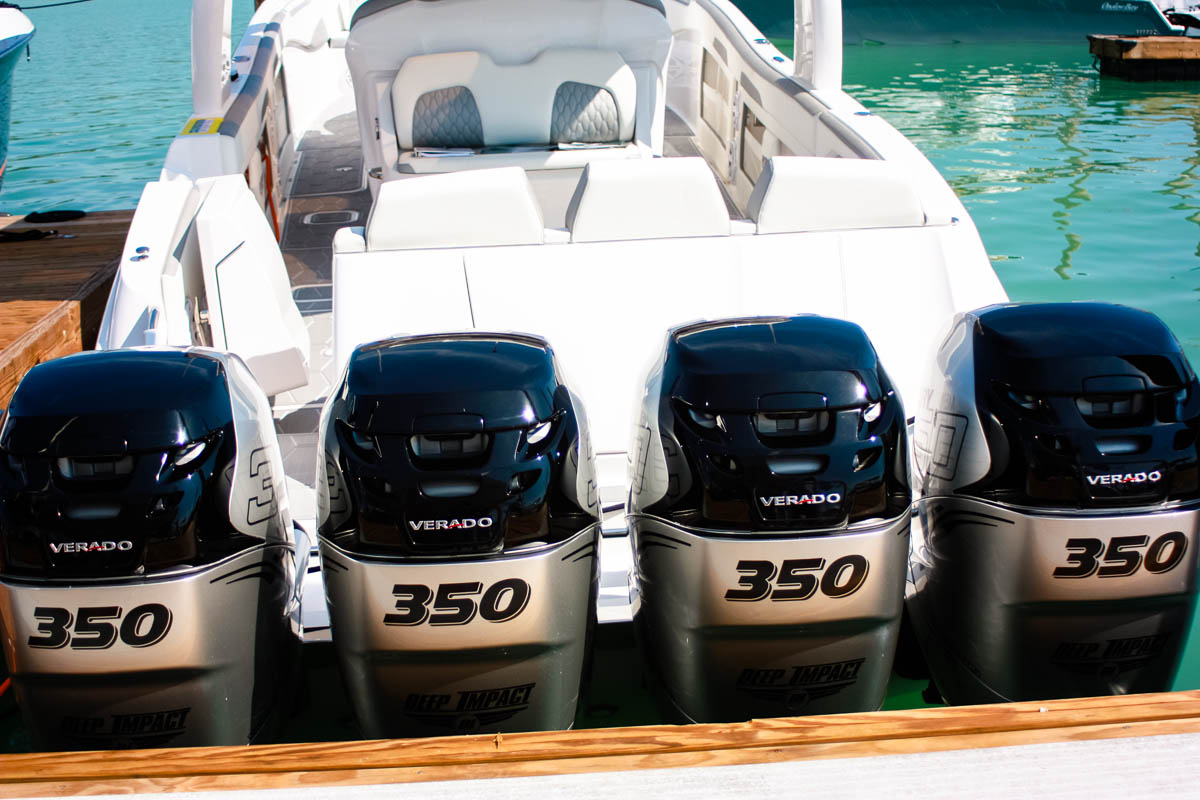 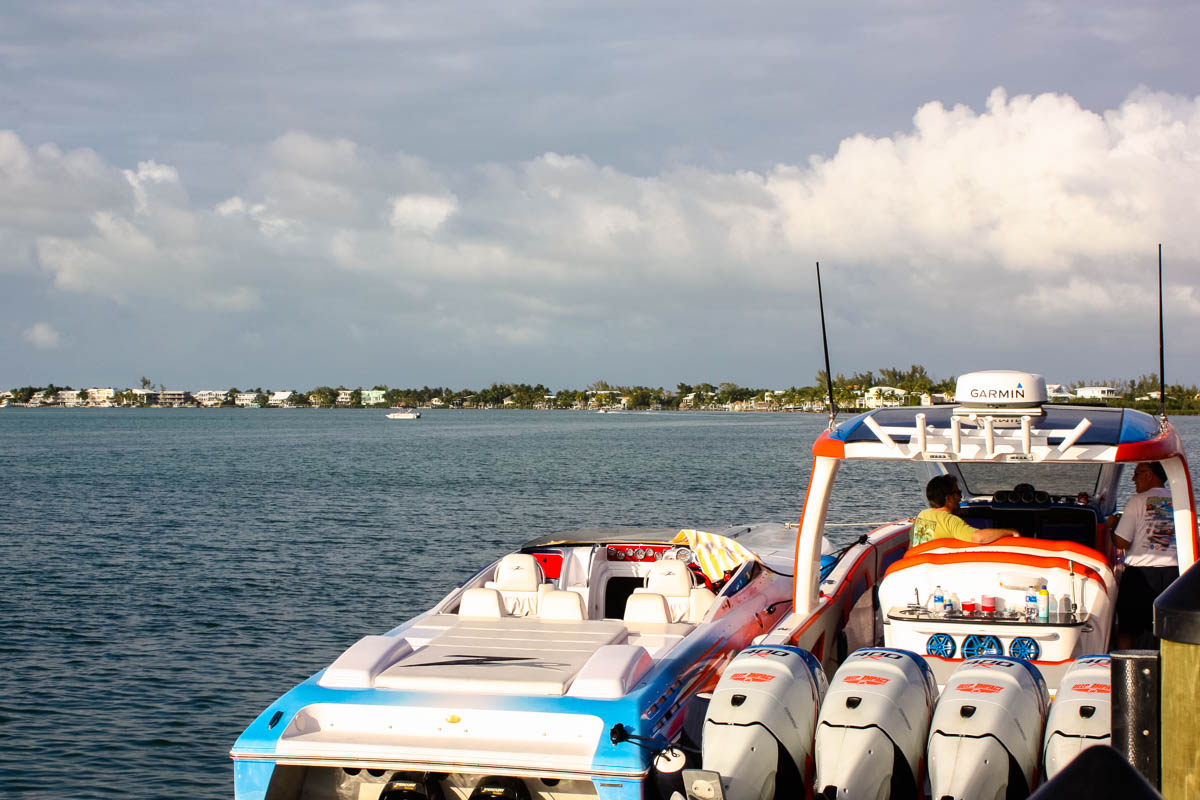 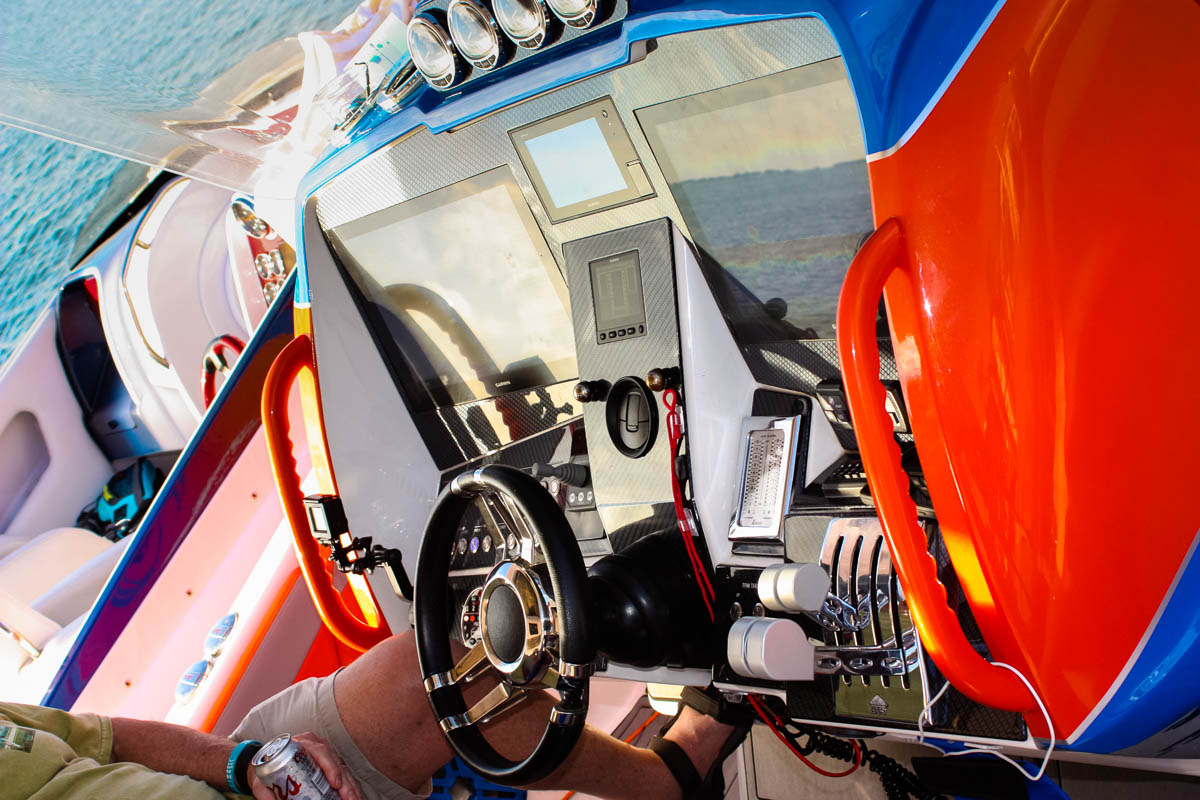 And for no better comparison, both the Sport and Cabin versions of the Deep Impact 399 have the knock-out looks and body of Gisele Bündchen and the speed and agility of Tom Brady (no matter how you feel about him). We have included an array of photos so you will have a clear vision of the differences in style and graphics between the two models. But that's not all. More importantly, the South Florida-based company also takes the prize in terms of addressing functionality. Let's see why!

If you find yourself seated on the rear bench unless there's a "rare" rear grabrail, really where do you hold on to when the captain is cruising at a good clip? It's true the spooled-up triple or quad outboards aren't going to churn out 160-mph catamaran upticks but regardless, when the gas controls are pushed down its nice for your mother-in-law to have the option to hold on when you invite her on board. The fold down individual armrests in between the back row of seating that Deep Impact have included may seem trivial but this is a brilliant and practical attribute.

Next up, Deep Impact had the divers in your crew in mind when it redesigned and widened the port side dive door located in the same corner as the additional transom exit. Rear hatches have also been enlarged to accommodate the dive tanks.

So your mother-in-law is safe, the divers have been attended to and now to keep the girls happy, another component for ease and accessibility that will answer her and all her friends first question, "Where can we put our bags and shoes so they will not get wet?" Well, let the ladies know... dry storage compartment facilities have been added along the gunwales and open easier and quicker than your wallet at the Wynn in Las Vegas. 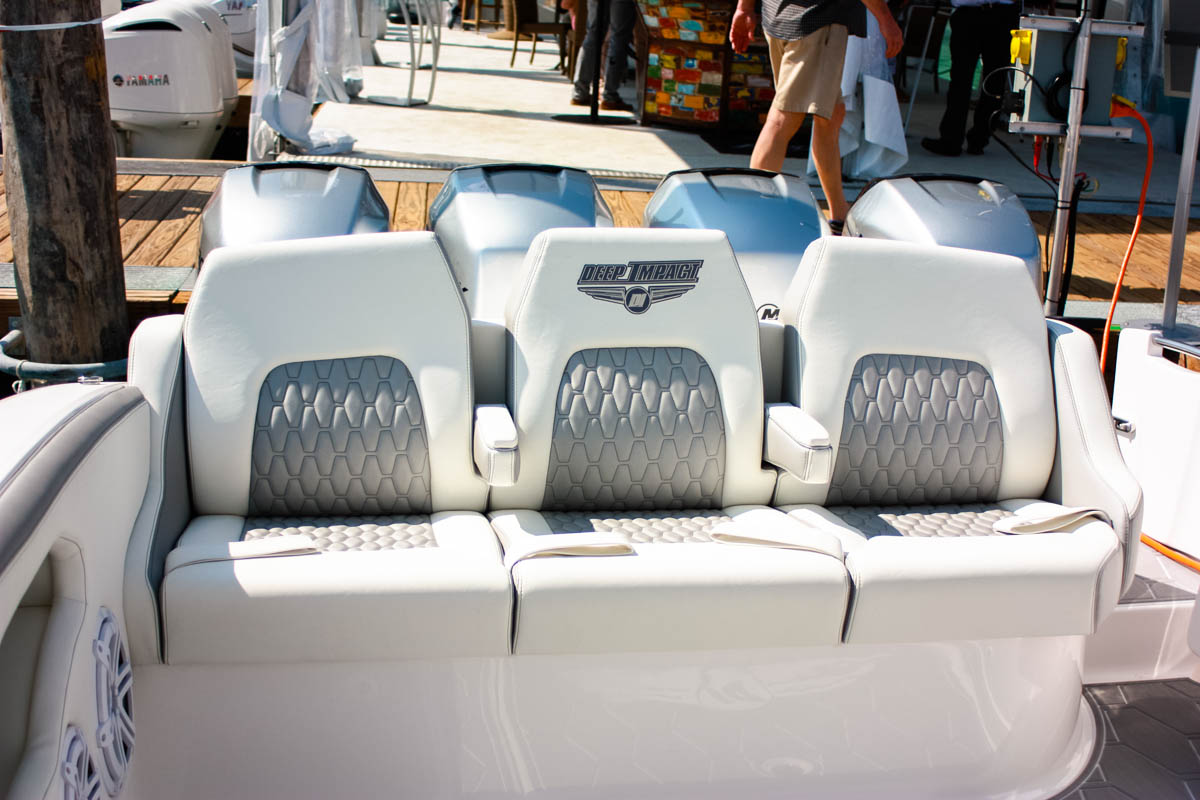 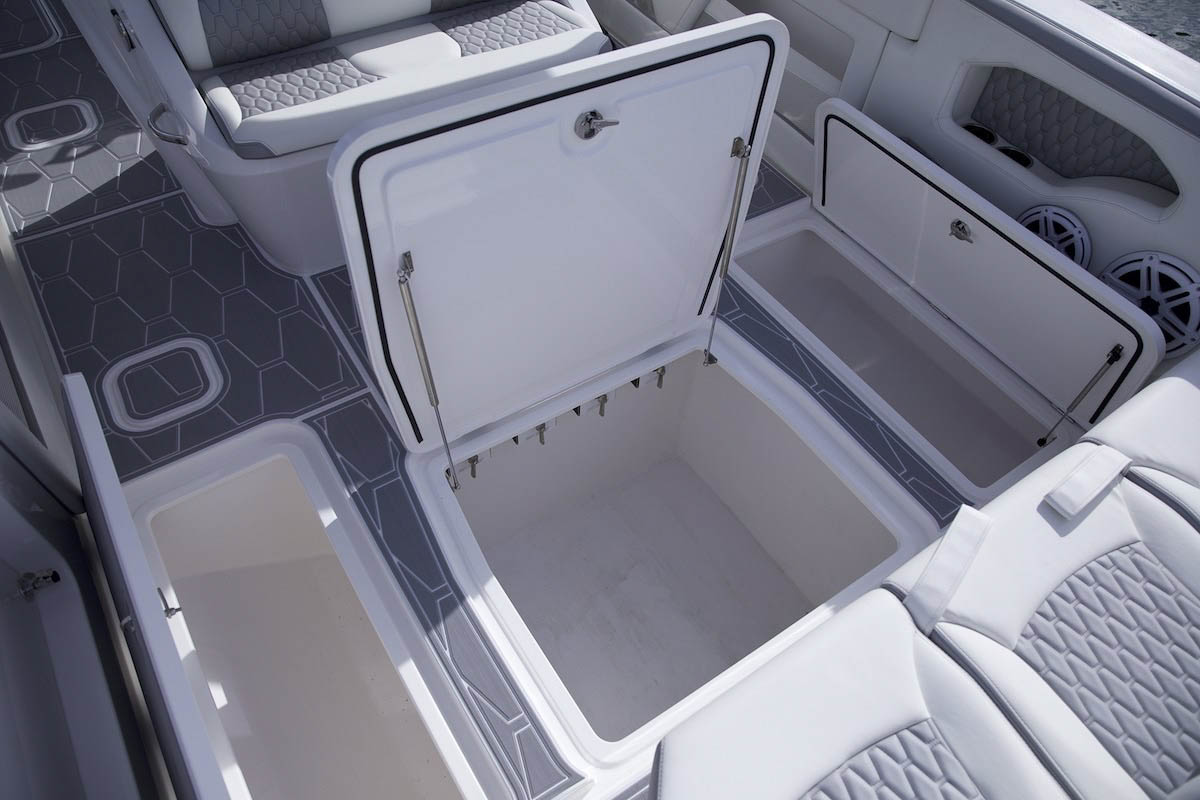 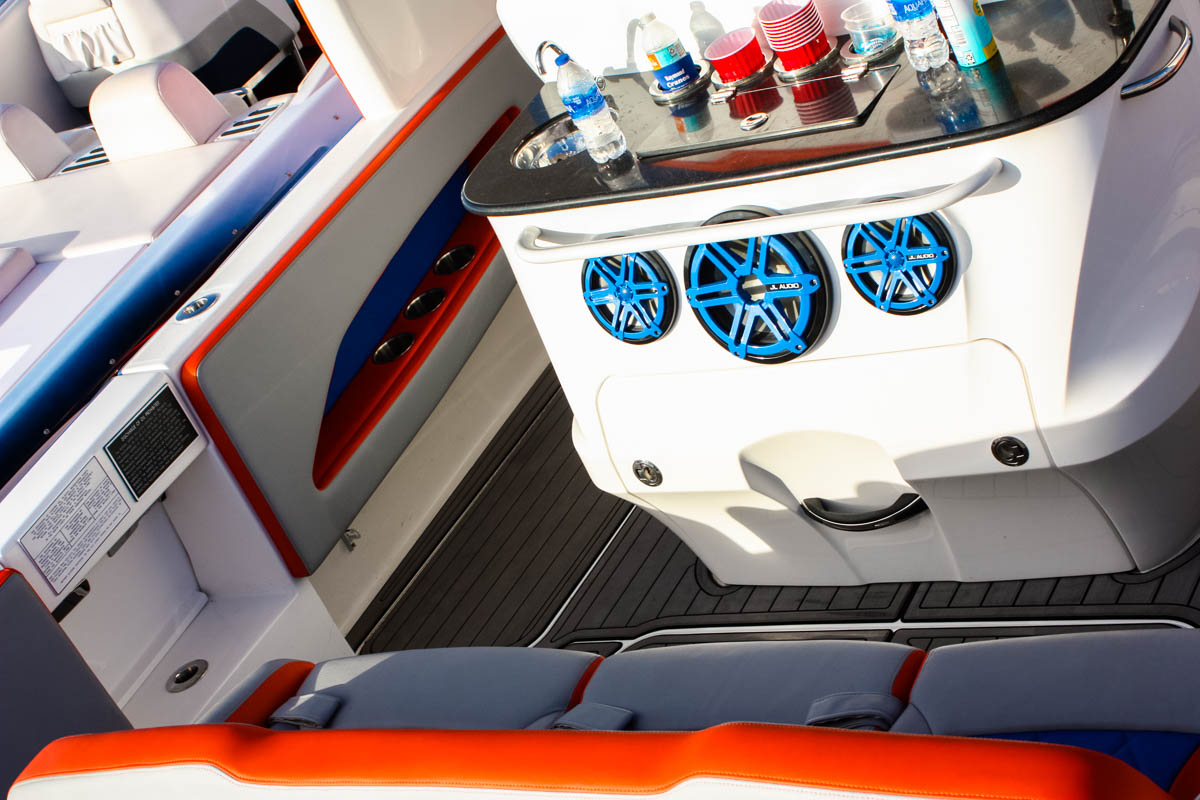 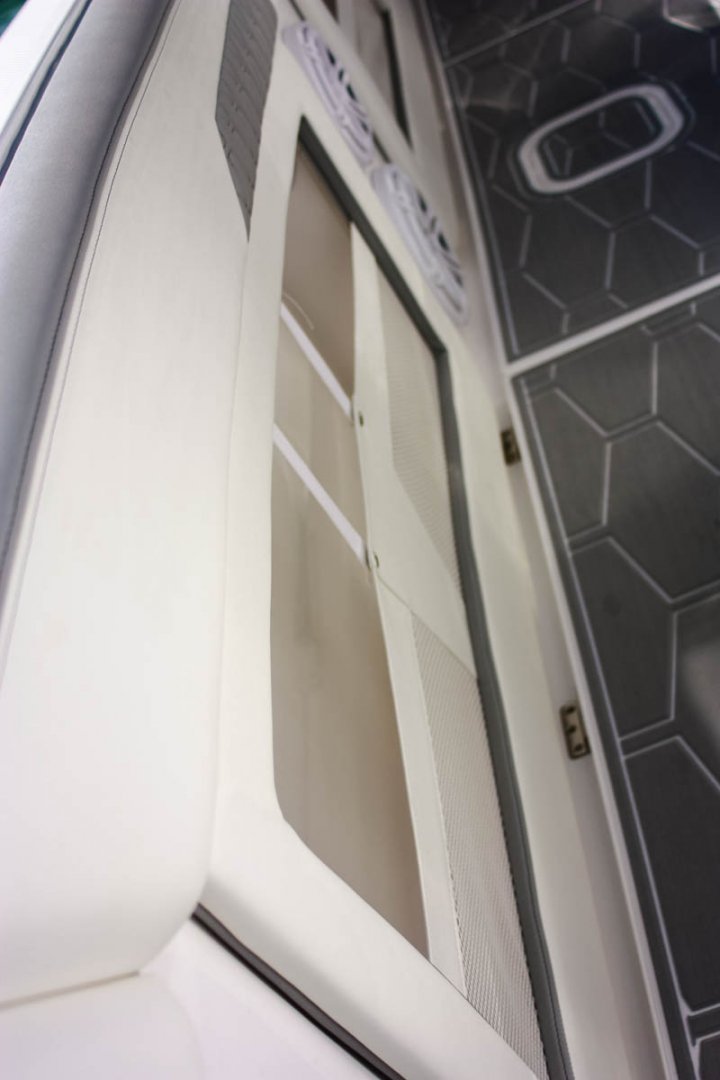 Moving to the below quarters, when the spacious cuddy on the bow of the 399 Cabin was revealed, I was more than impressed, I was captivated with its six feet of headroom and oversized V-berth, and it was a spot I wanted to hang out and relax in. It had an uber-modern vibe down to the shape of the windows, storage areas and mirror. I can see friends and family really maximizing "down-time" spent there. The width was exceptional and very noticeable due to the wider shape of the Deep Impact.

An inverter system permits the air conditioning to run for a solid eight hours without having to recharge it. This means no gas generator is needed and the cabin is perfect for overnighters. The enclosed head with a 6'6'' stand up shower and the galley also make life more livable. 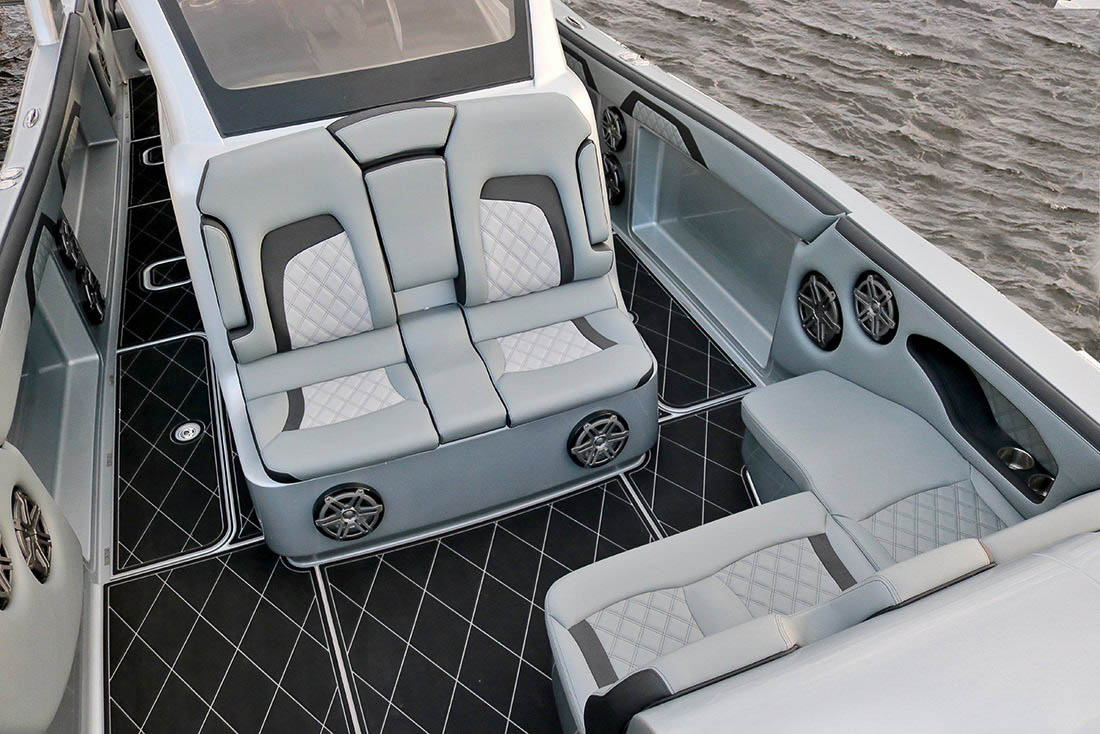 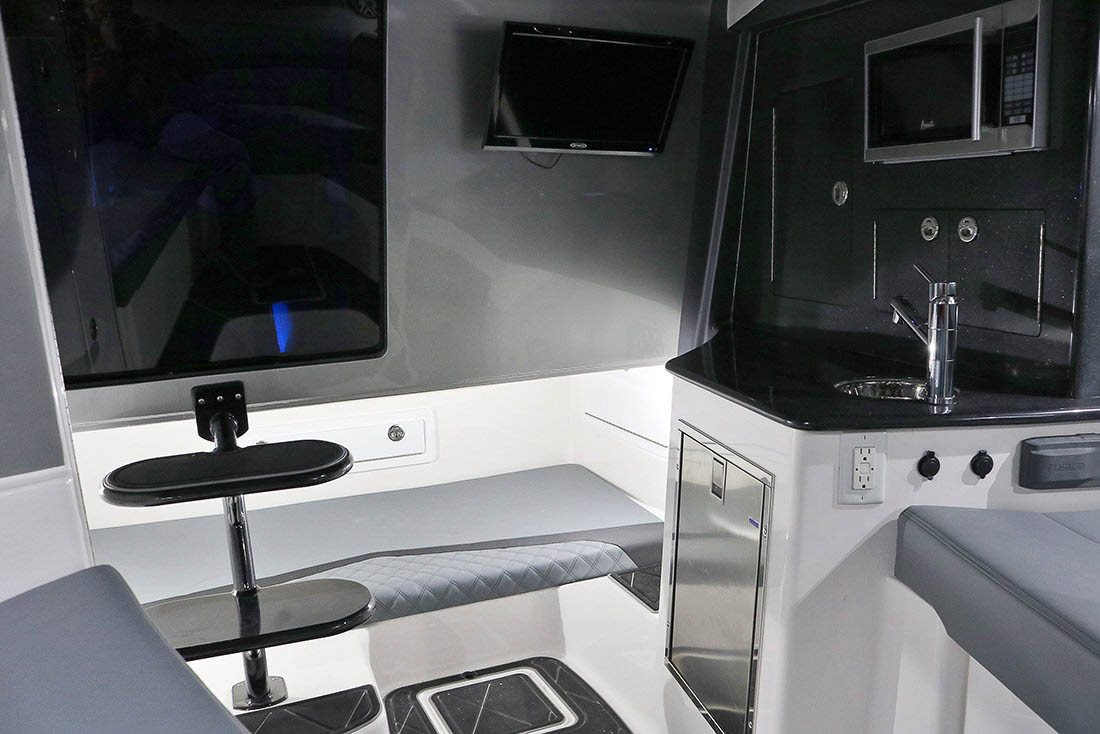 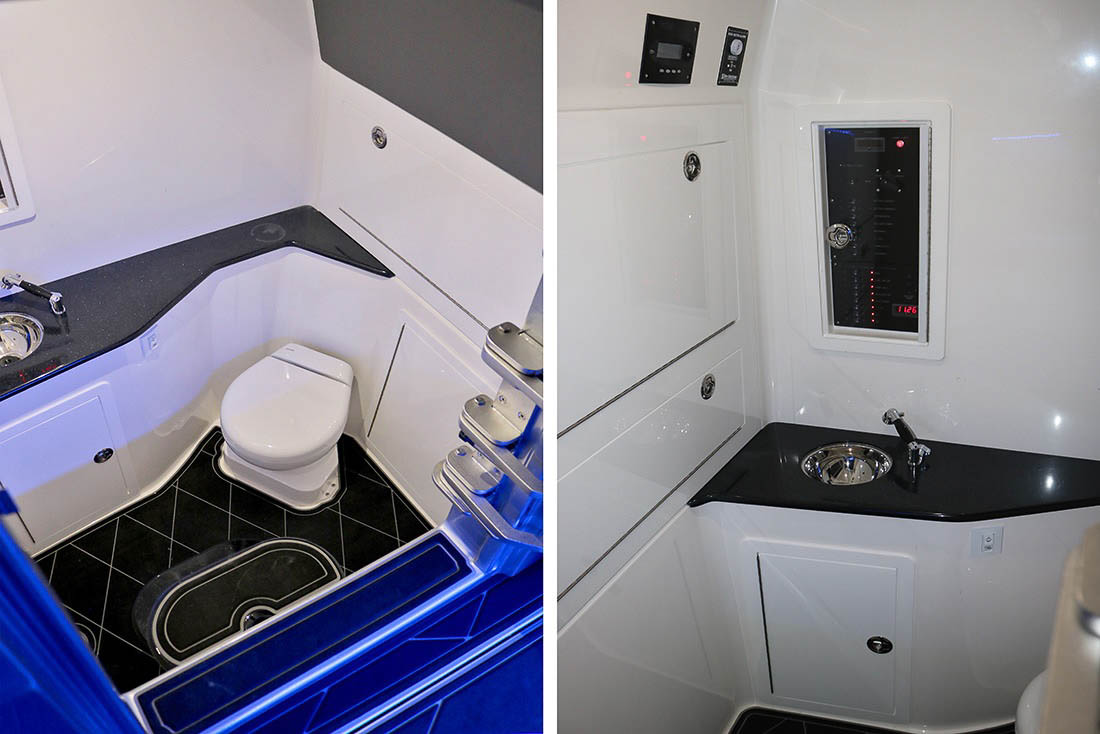 Now the difference with the 399 Sport is that the bow is open and the smaller cabin has been placed in the middle of the center console. Equally well thought out, I was surprised it was also rather roomy in feel and I loved how the cushioned box-like cover conceals the head by turning it into an additional seat. 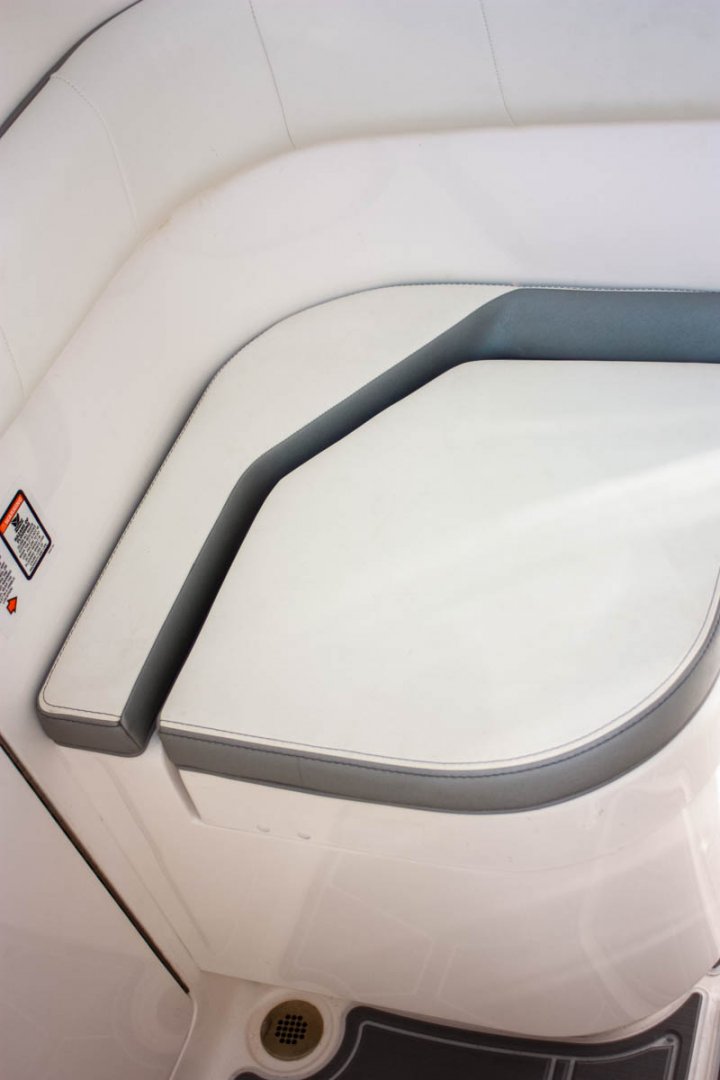 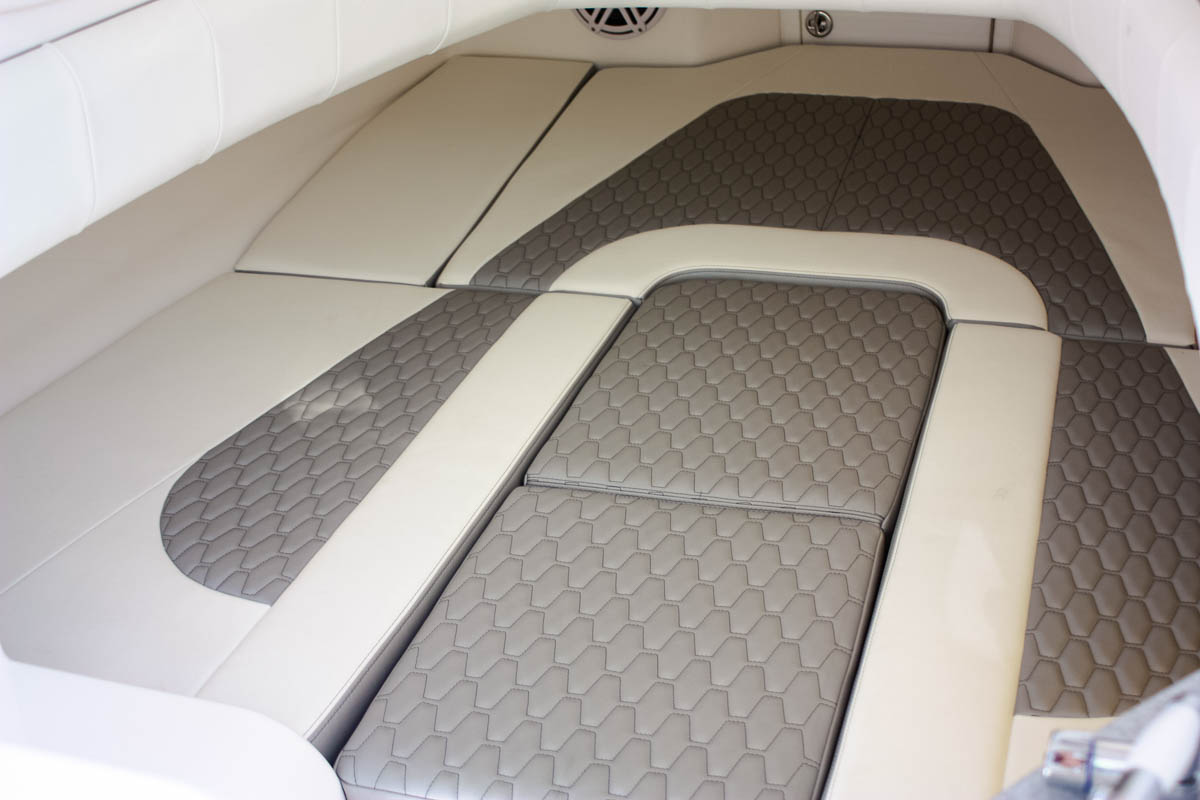 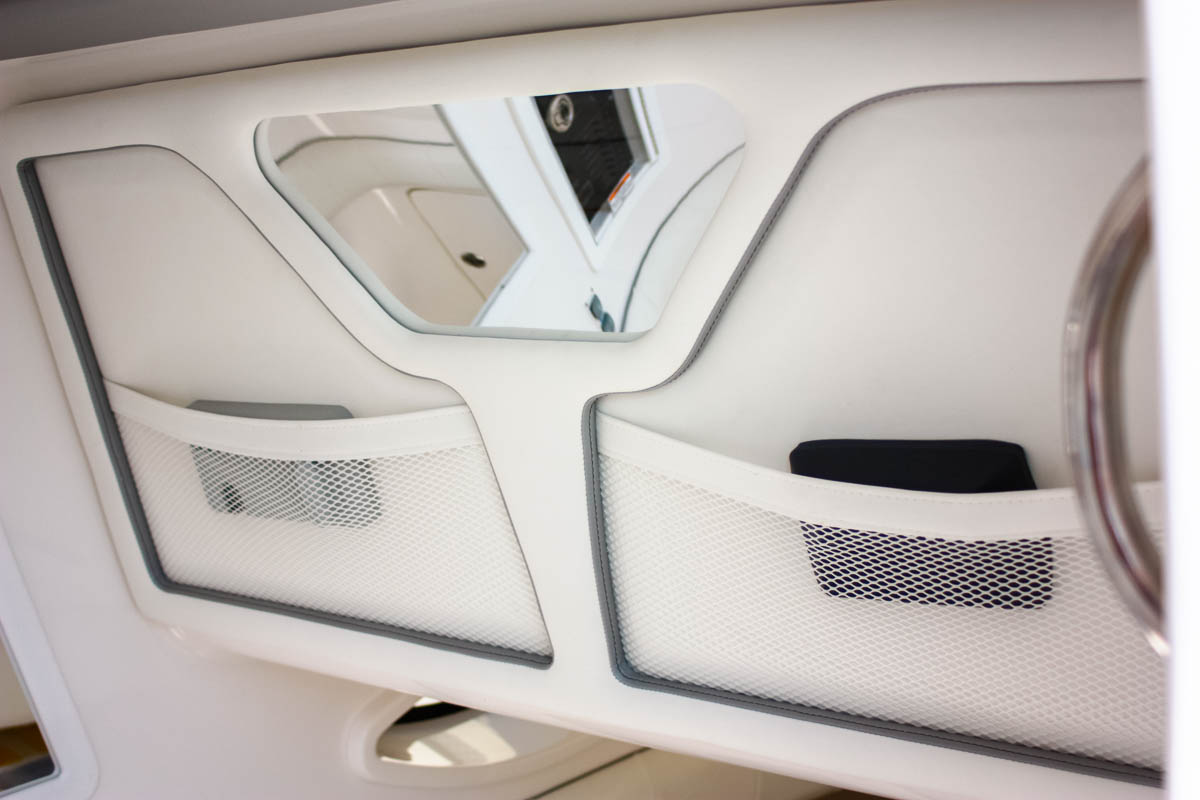 And best for last, the patented aerodynamic hardtop designed with a futuristic touch has a raison d'êtrebehind just looking cool as hell. Beyond physical appeal and style, the design reduces drag and increases efficiency. A flare along the edges was put into the plexiglass and it works to push the wind out on an angle.

This added wind fortification protects not only the entire vicinity of the cockpit but also the aft of the craft. The panoramic glass roof makes the helm a great area to hang out in and is generally cooler because the heat can't get through. It also doubles as a dry spot should the weather take a turn for the worse. 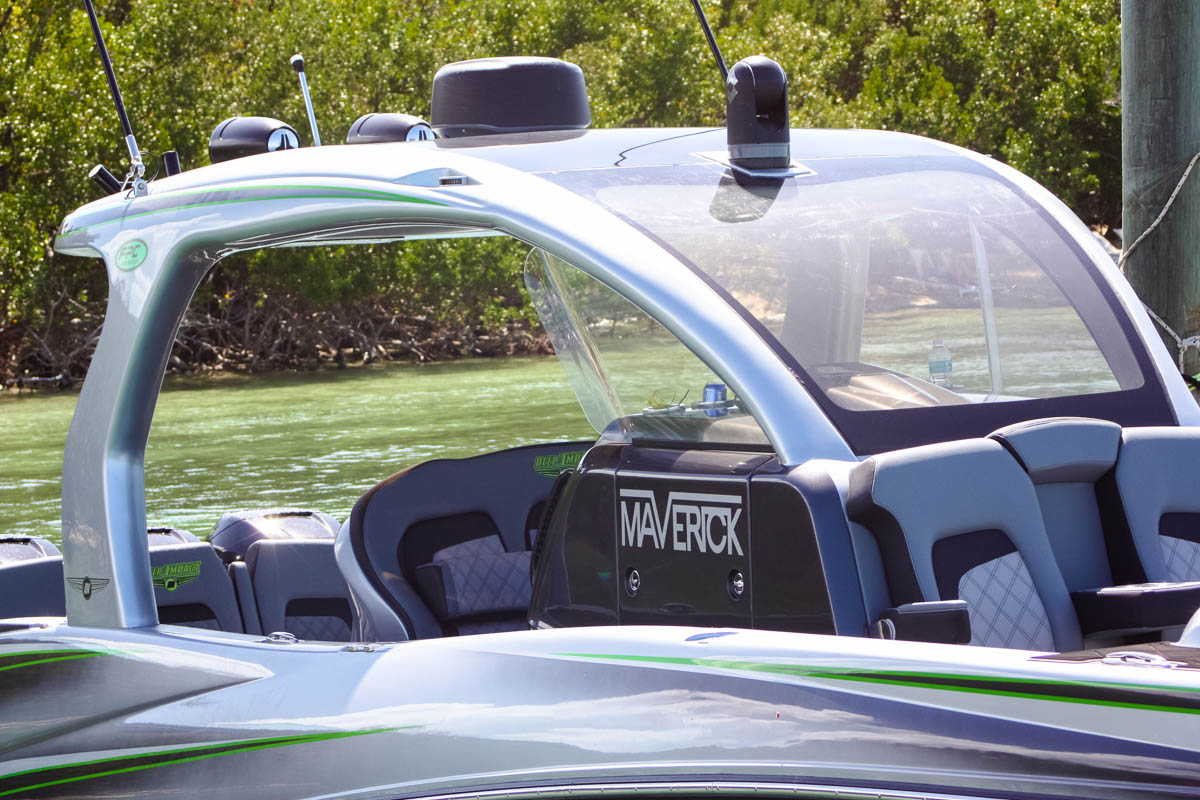 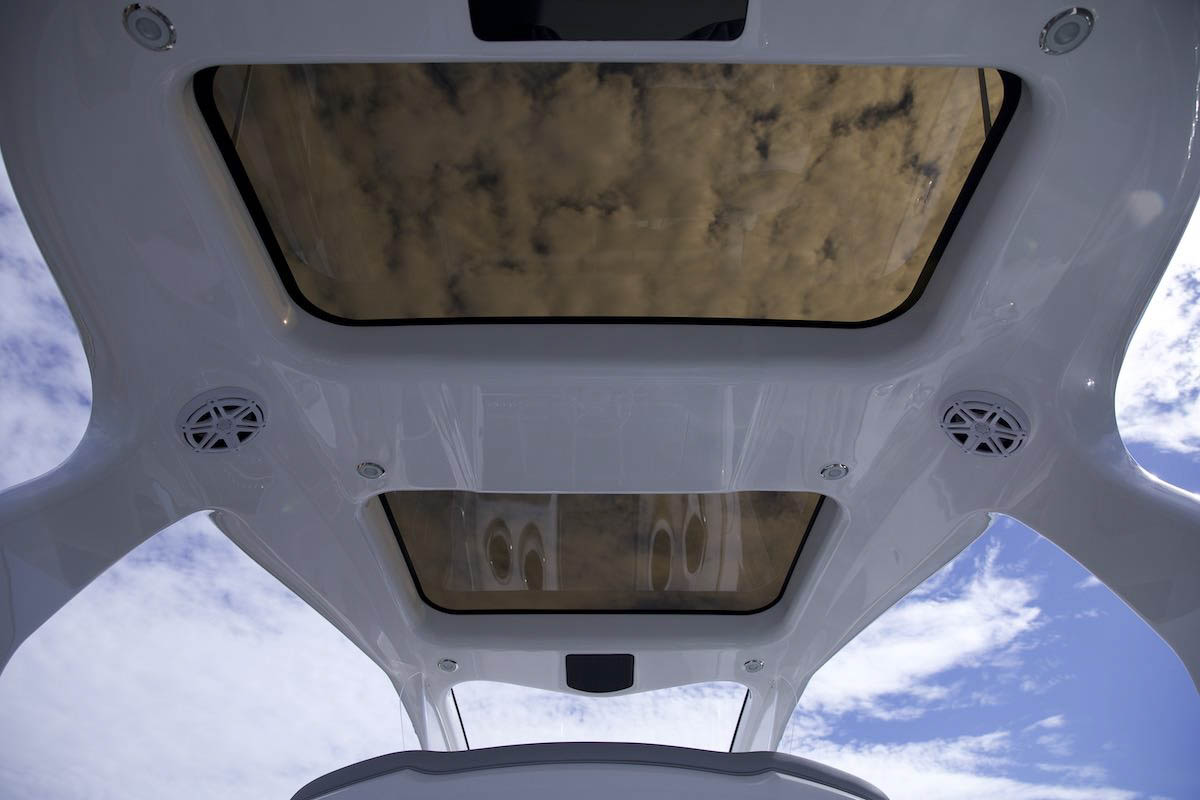 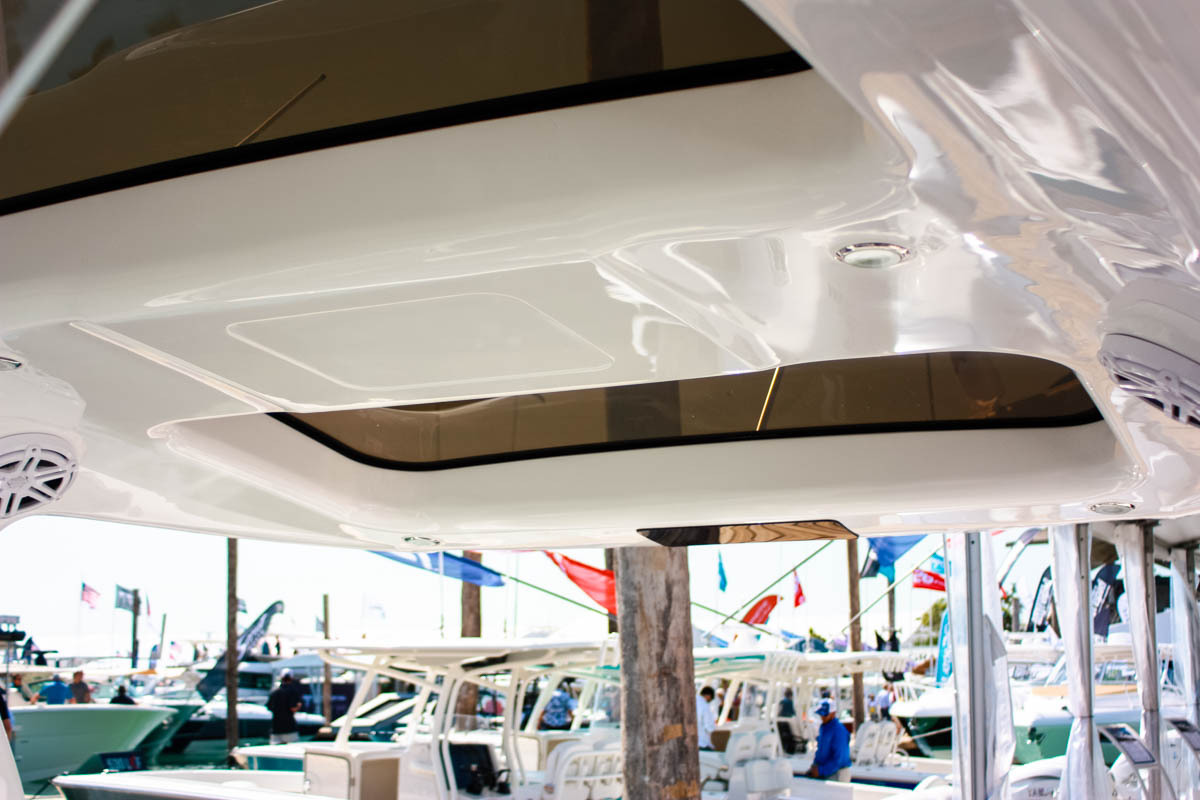 An additional advantage of the deflection design component is that it angles the wind upwards and those passengers seated on the bow too reap the rewards of no wind when running at high speeds because you don't feel the gusts trying to grab the boat and lift it up.

The design works to keep the downward pressure on the back area over the top and this plays into the boat's performance by directing the strain further below rather than how the traditional over-sized flat T-tops that tend to grab it. 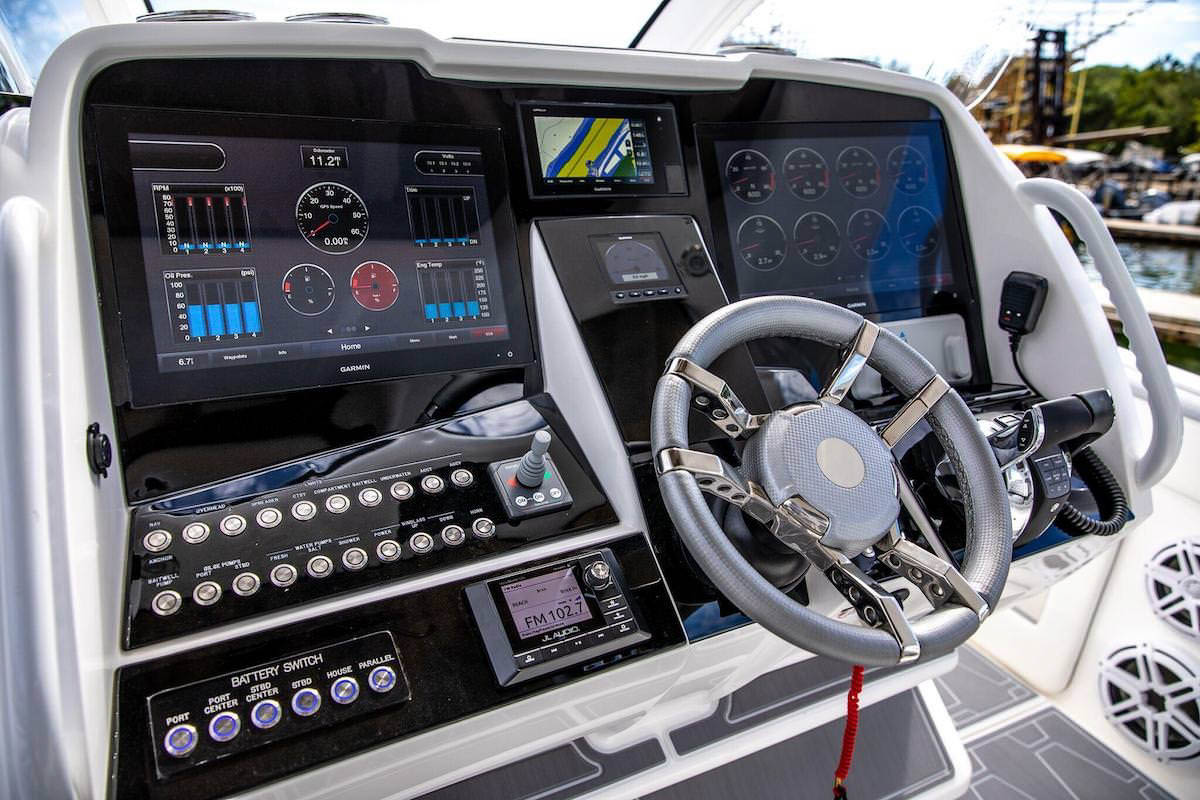 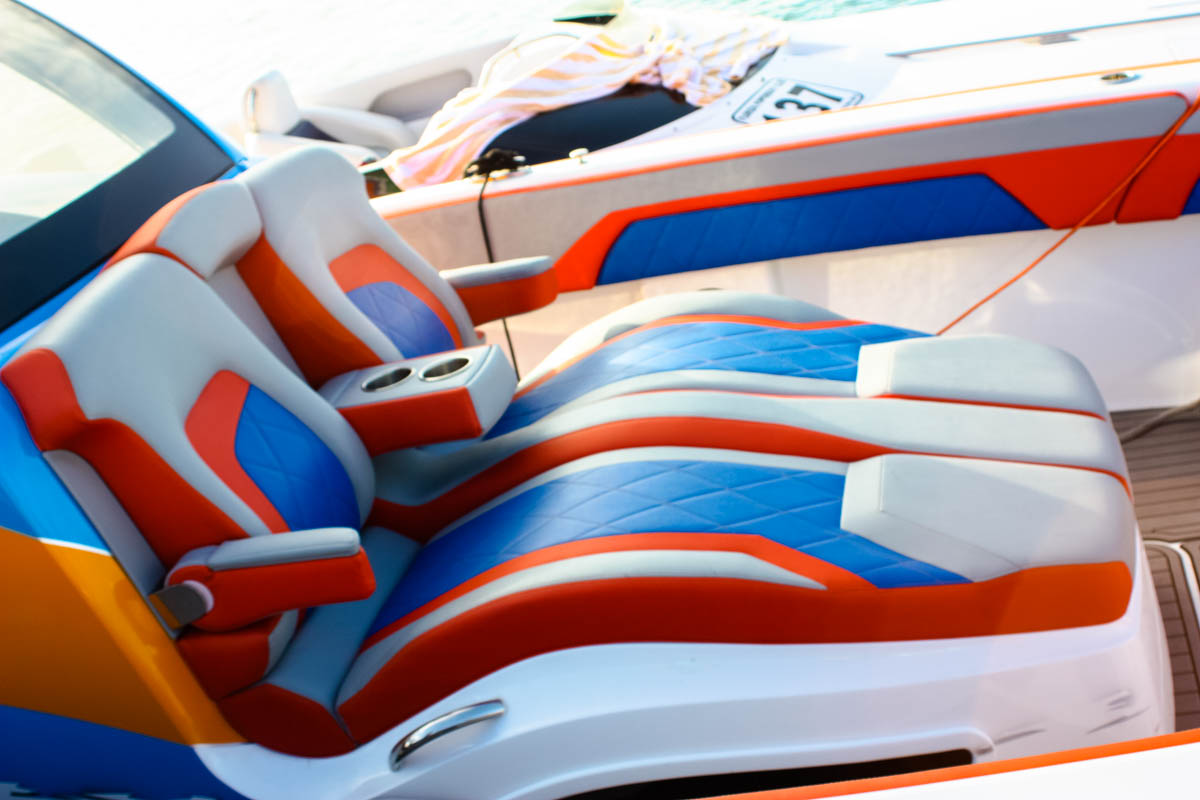 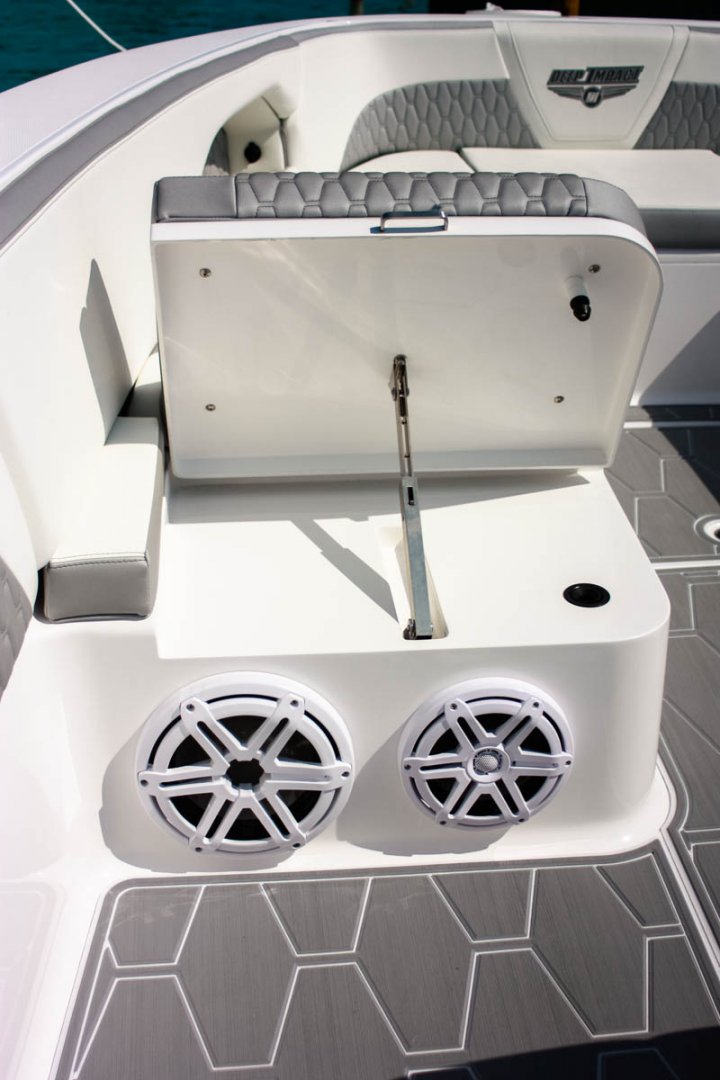 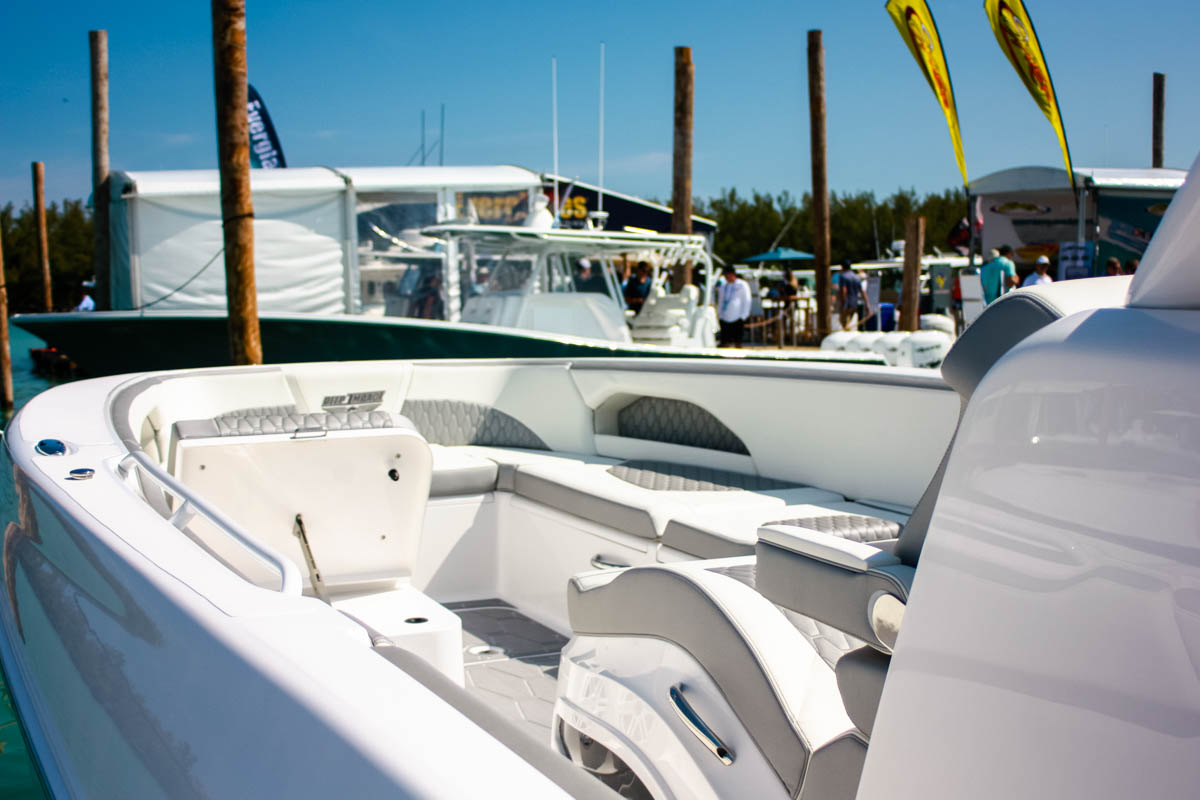 Another reason I personally love Deep Impact Custom Boats is there is no other center console on the seas that comes close to resembling this tour de force. Finally I can compete and win against my dad when it comes to recognizing a make and a model of a speedster, since he can in a split second tell me what year and physical bodily changes were introduced on any classic Corvette or Harley Davidson.

With a Deep Impact... you see it coming. Period. That sexy, aerodynamic mohawk-shaped rooftop jumps right out at you. And now buying a center console can be as easy as ticking off the boxes that suit you best when you visit www.deepimpactboats.com. 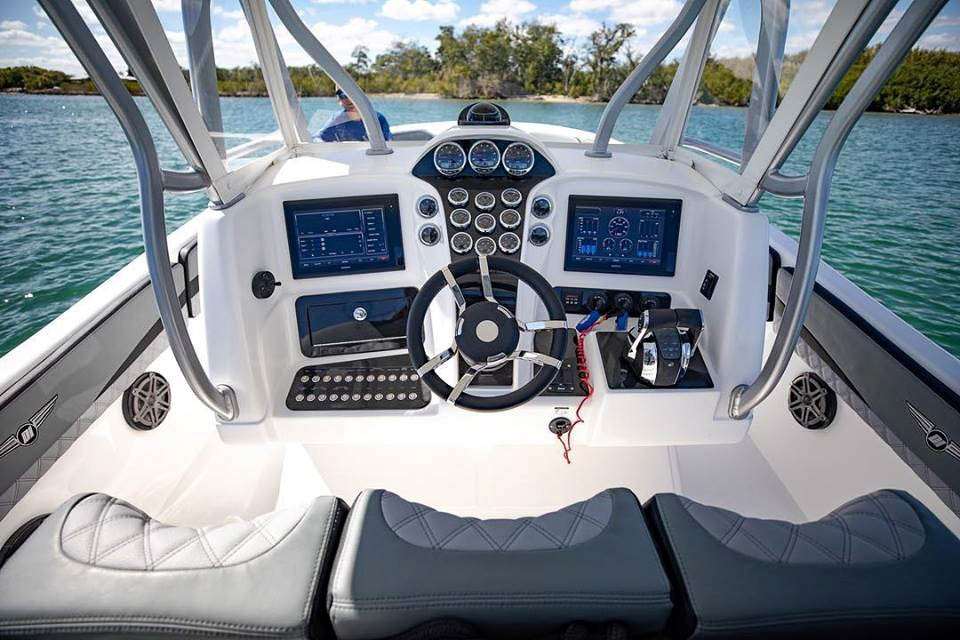 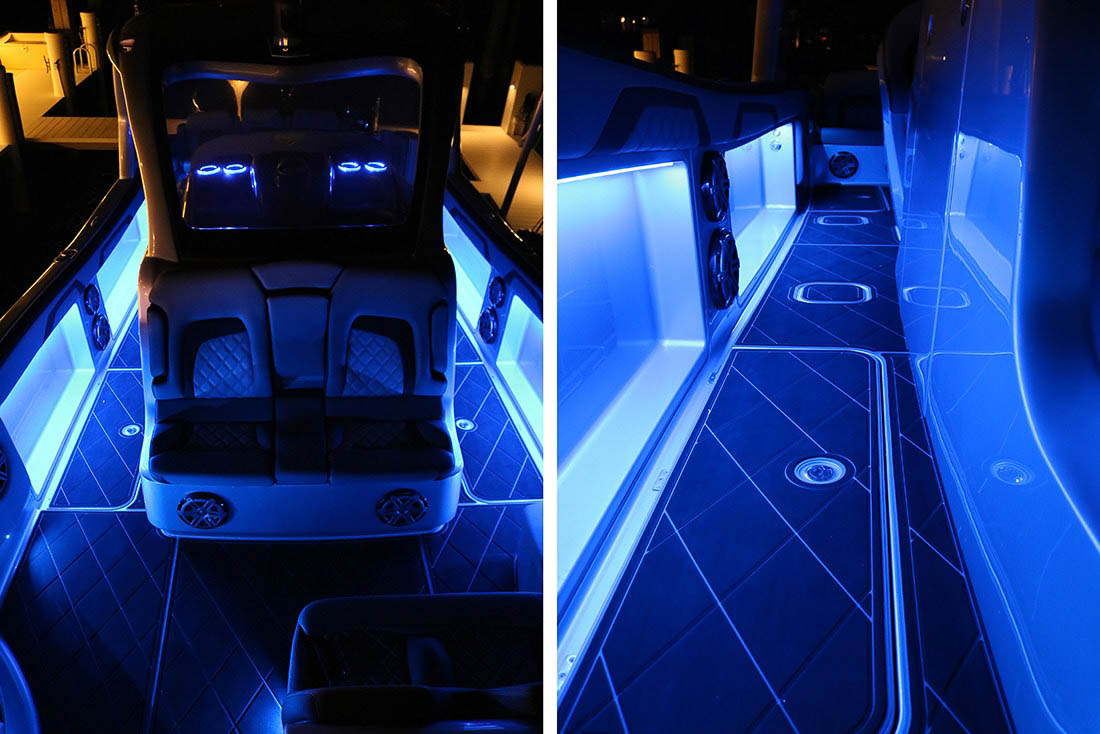