No doubt, the opulent British boat builder Sunseeker International set out to create a different bird of sorts with its version of the hawk, consequently challenging Aristotle and his findings. The Greek philosopher noted 11 variations when he wrote The History of Animals in 350 B.C.E., none of which would dream of eating the heart of its capture, nor physically snatch its prey during the months of summer.

Sunseeker's center console Hawk 38 on the other hand, does just that. The "one-of-a-kind" species will scoop you and the crew up from the quays all season long, eagerly eating your heart out... one boat ride at time. 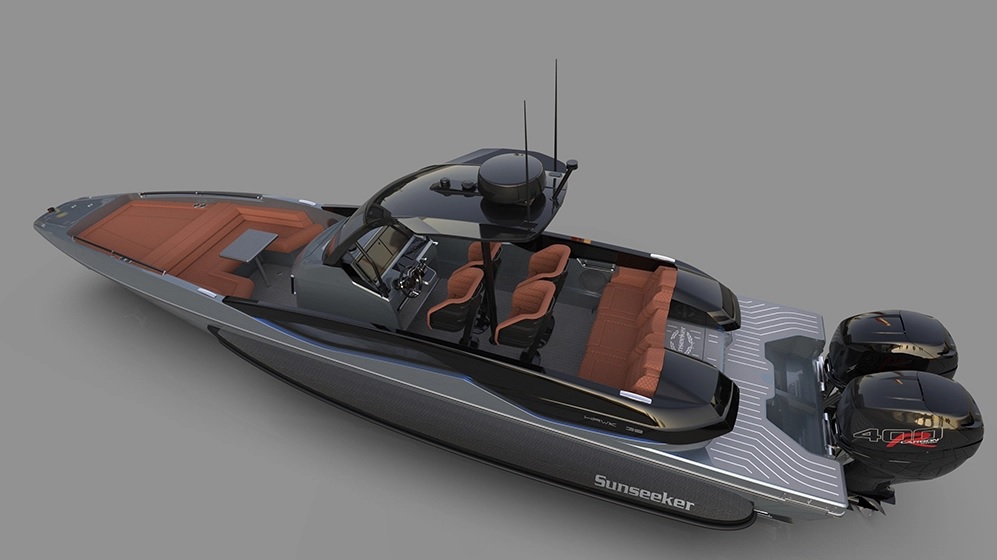 Appealing to an array of boat nuts, whether devotees derive their joy from ripping around the villa-laden cliffs and coves of the Med before mooring back up to the mothership, or zipping back and forth from the Florida Keys up to Miami with the family sounds more delightful; the 38-footer talks the talk and walks the walk. 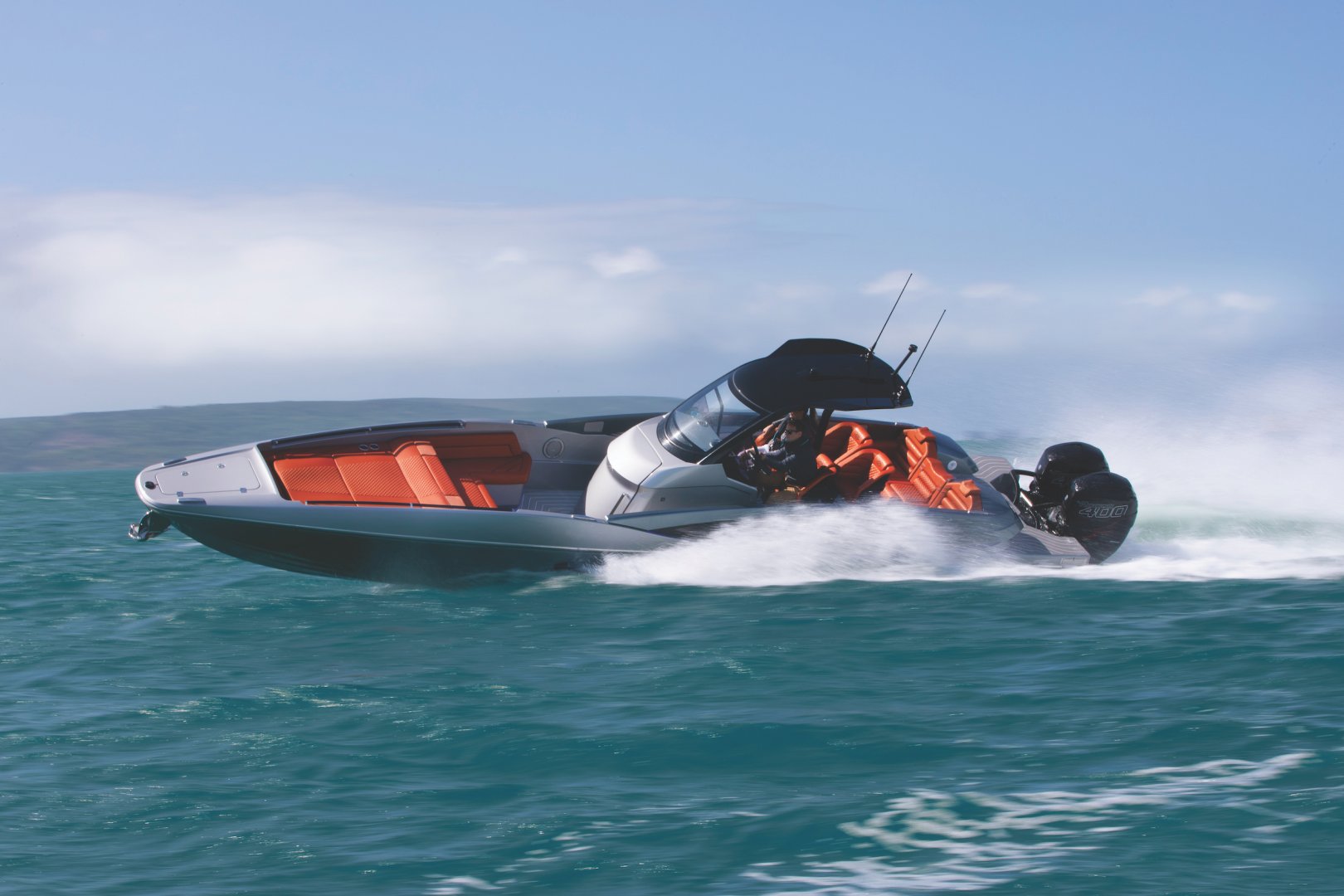 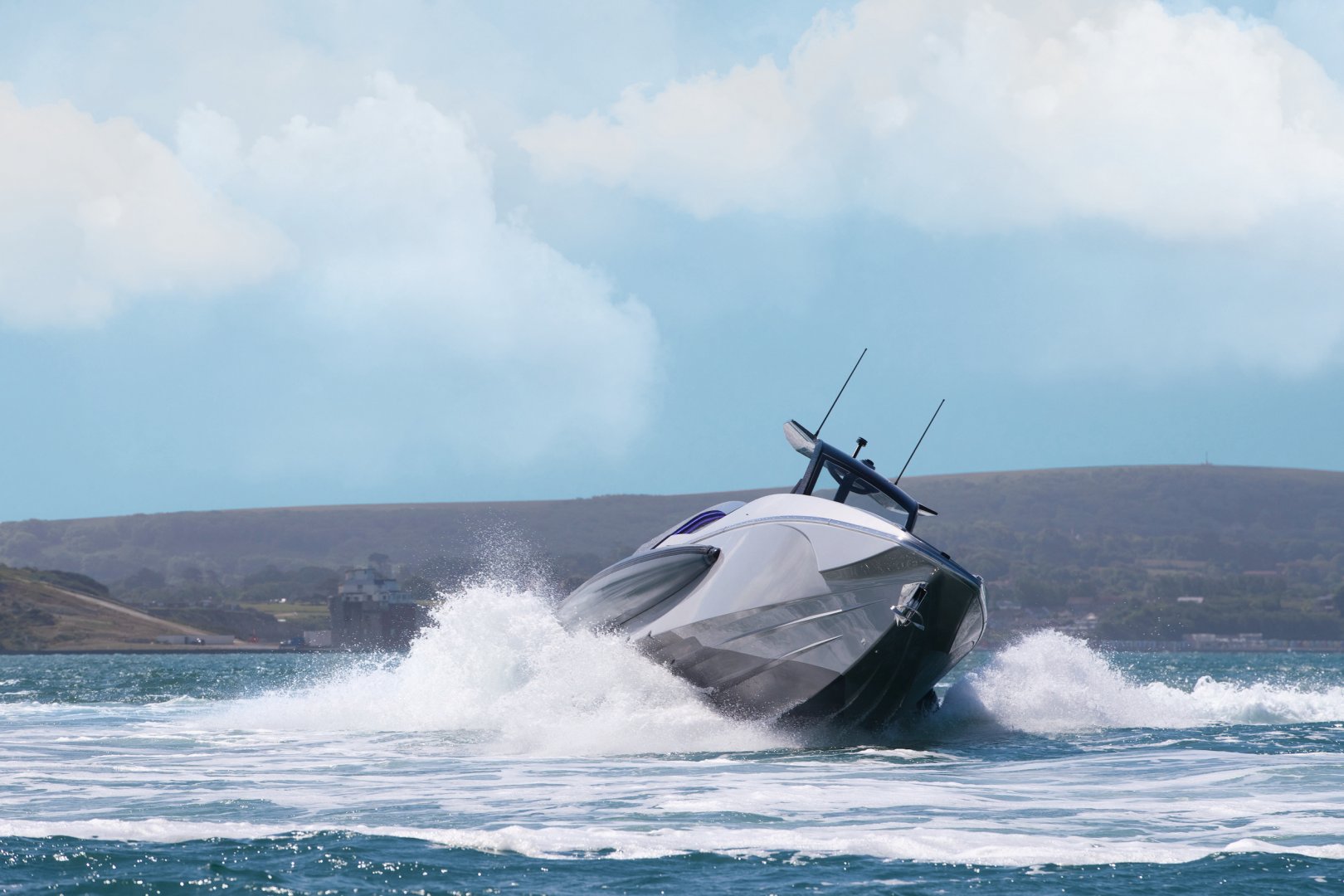 A solid 24 months of R&D, and three more in fabrication resulted in the 2019 hatching of a modernistic-sculpted Hawk 38. Branded as both an adrenaline-inducing day boat and/or superyacht chase boat, no matter the moniker, the center console serves as evidence -- the European shipyard has returned to its high-performance heritage. Think Sunseeker XS 2000 with Yanmar diesels, if you're looking to reminisce. 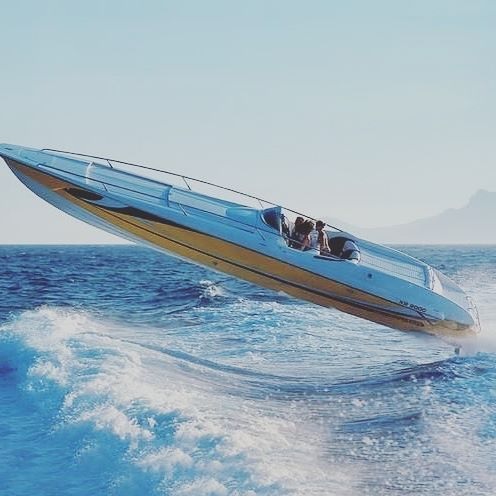 Rooted in racing, the Hawk 38 was given a 7ft 7in (minus the stabilizer tubes) beam, hypothetically competing in length, with any long, lean and leggy guests stretched out along the fore-end sunpad. Heck, why stop with the tall skinny-girl comparisons, it's even narrow enough to squeeze down the ill-famed Cross Bronx Expressway without nicking a neighbor a lane over, if we're imagining it's an auto.

But in all seriousness, the ultimate maritime machine holding 185 gallons (700 liters) of fuel and mounted with double Mercury 400R outboards... is built and bred for dissecting deep oceanic crests and congested channel traffic in the harbors. To own one, the luxury center console Hawk 38 totes a hefty price tag hanging from its neck and will summon $725,000 dollars before taxes (£600,000 British pounds / €653,000 euros) from your custody. Let's see why it's worth the outlay of three quarters of a million dollars. 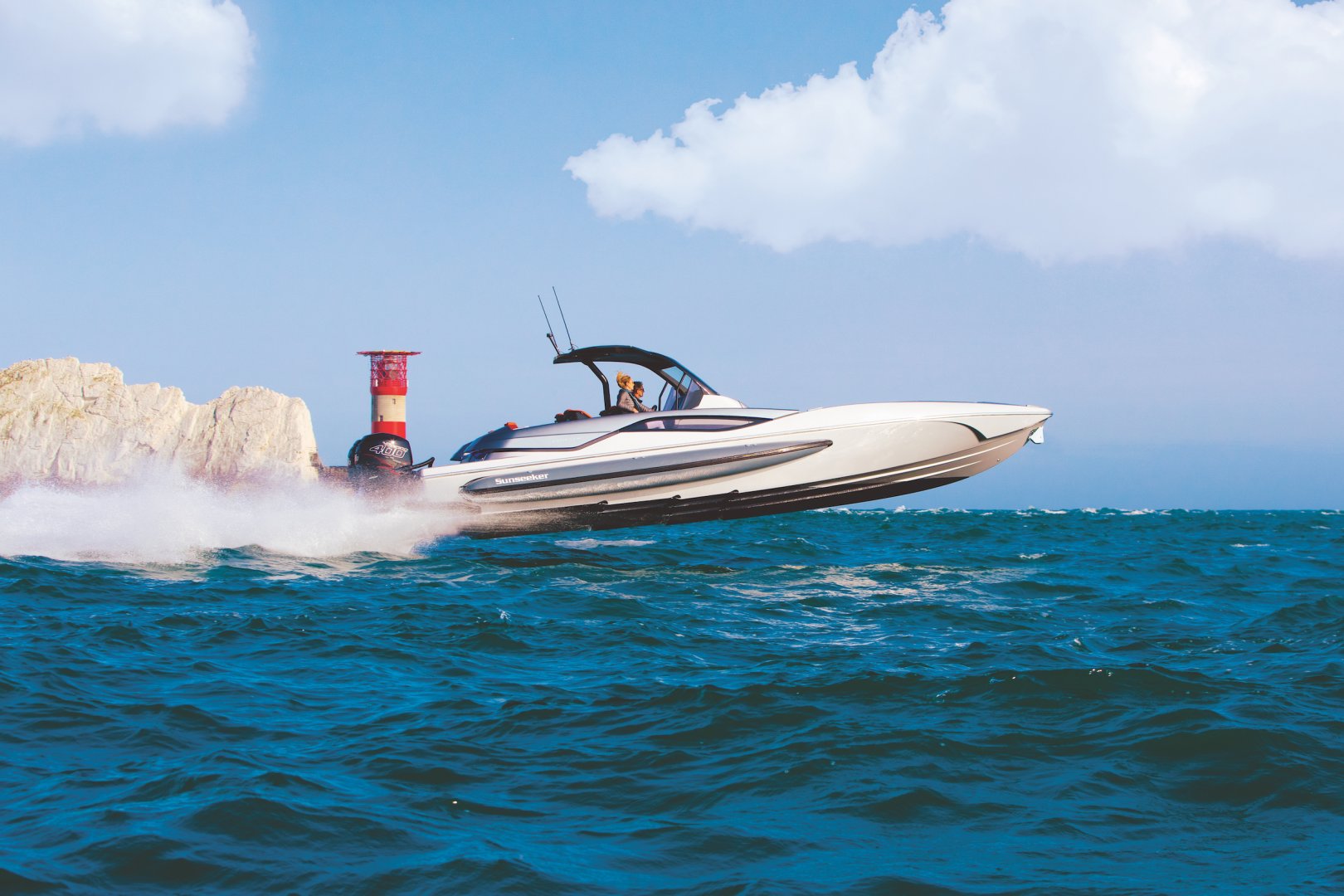 Driven by Italian aesthetics, the bird-gone-boat was crafted with the support of FB Design, under the command of international powerboat builder and winning professional pilot, Fabio Buzzi. Sunseeker loyalists need not fret. An absolute authority on go-fast boats, Buzzi brings a wealth of experience to the drawing board especially when adding up his countless cockpit missions in the famous winged mono-hull La Gran Argentina, sea-time in the notorious, non-stop New York to Miami Cannonball Race and hair-raising Cowes-Torquay crusades; as well 43 World Speed Records and 55 World Championships appear on his racing resume.

Under Buzzi's control, he saw to it that the Hawk's hull was laid up using the all-new FB Design patented structural foam technique. The result after injecting the foam into the voids between the hull and the deck and gluing together the internal components was a tougher, rigid base. This led to the birthing of the Hawk's "anti-dive unsinkable" bow. WHOA! Helmsmen are free to go airborne off that ferry wake with no fear now. A reduction in noise and vibration were two more positive groundbreaking gains attained from the foam core finish.

In addition to the invisible internal layer of fluffy stuff, the Sunseeker speedster inherited a highly visible RIB (rigid inflatable boat) external trait too. Rubber tubing graces the edges. The inflatable Hypalon 866 STAB tubes were positioned to reduce lateral pitching and ensure an enjoyable and secure ride when out in the big chop. An added advantage to having the rubber sides includes hassle-free ABCs -- Anchoring, Boarding and Coming back to the docks -- for the operator. 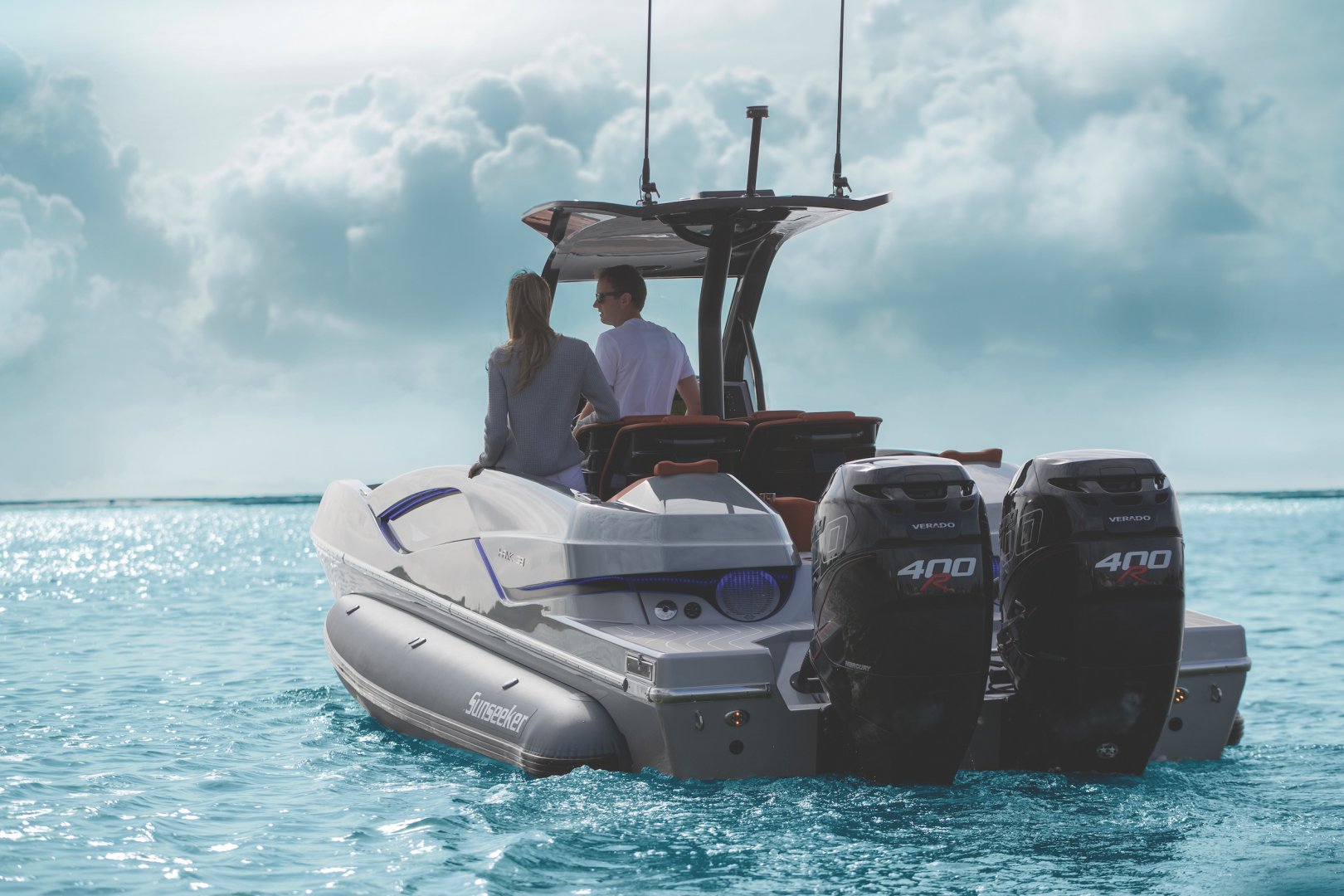 To complete the build, the European chaps agreed on a three-step hull, reason being drag and turbulence are reduced by the creation of the three separate planing surfaces. Secondly, due to the low freeboard 38", Sunseeker was able to mold a deflector into the bow to displace water should it be challenged by a stuff. 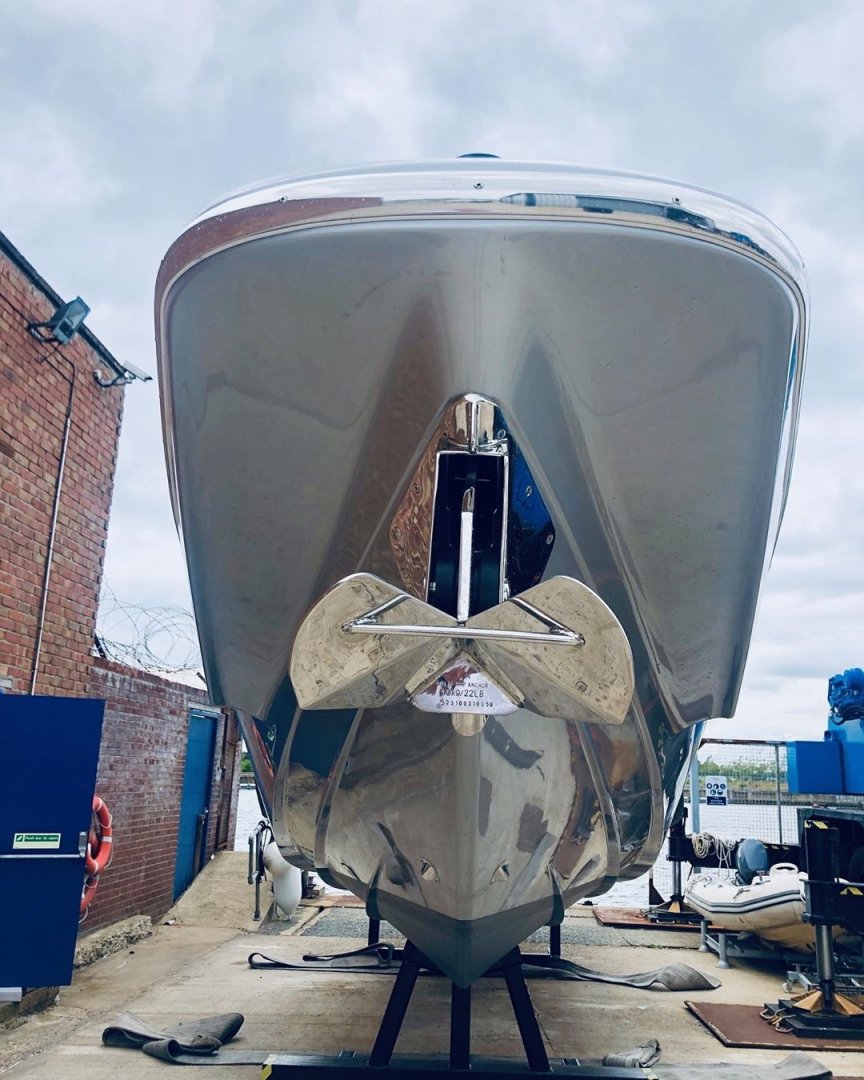 Demanding and commanding your attention from the moment boarding is complete, high-sided gunwales reach out practically grabbing you, as if riding inside a boat as opposed to on one. Built-in LED lights have been incorporated into the sides of the hulls, retractable cleats drop down completely flush and carbon fiber hand rails with polished stainless-steel mounts run along the perimeter for easy passages from the bow to the stern.

To maximize the frontal experience, the area was fitted with elevated headrests, U-shaped seating, a cushioned sunpad and a centrally placed, collapsible carbon fiber table and Bimini shade, which can be added and removed as needed. 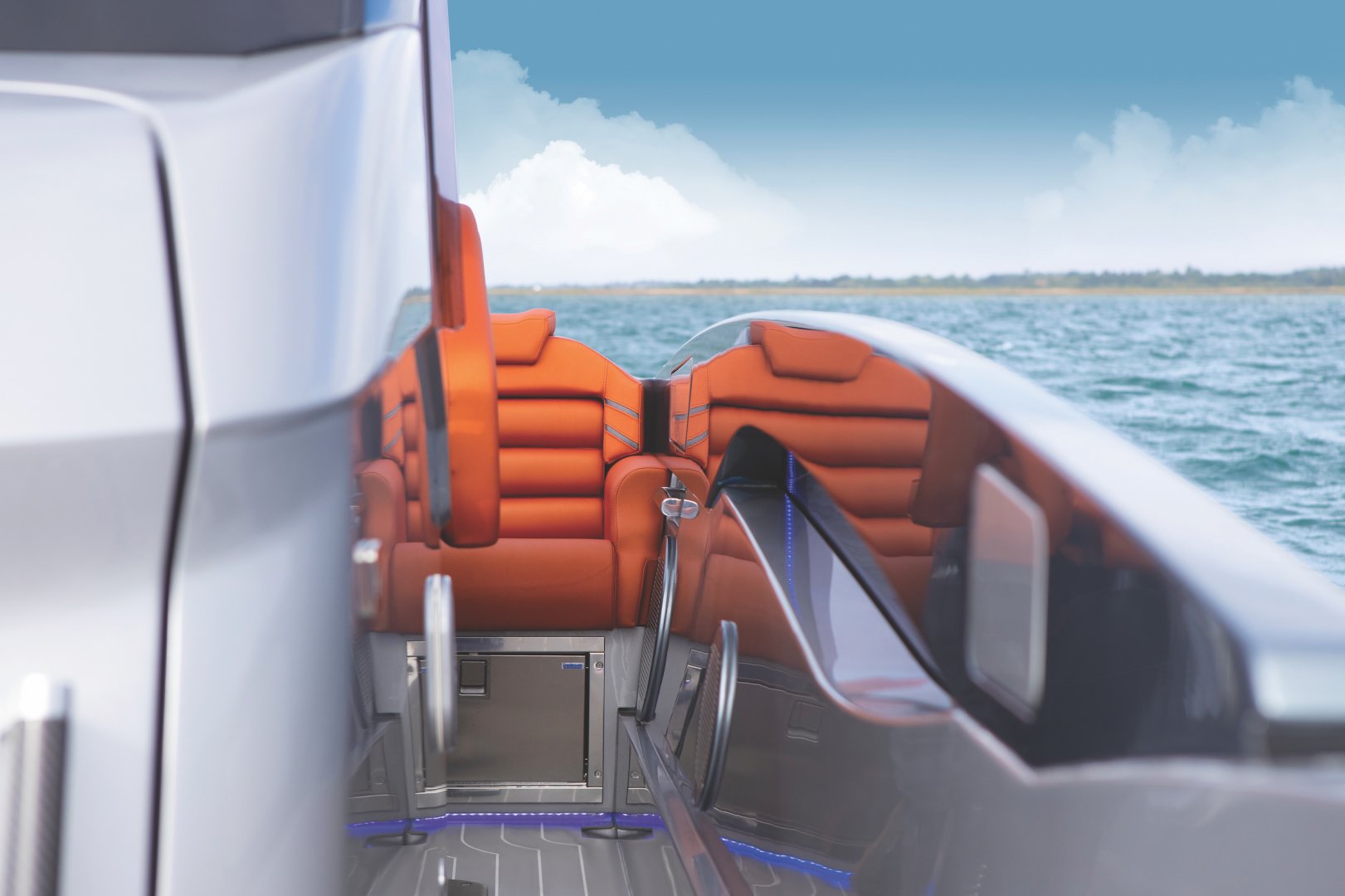 The sunpad effortlessly flips back to access a cavernous storage compartment capable of holding a pair of SEABOBs. Two dedicated bulkhead-mounted charging units placed inside the locker have been installed to facilitate charging, and race spec compression latches promise to not come undone when running at full whack. 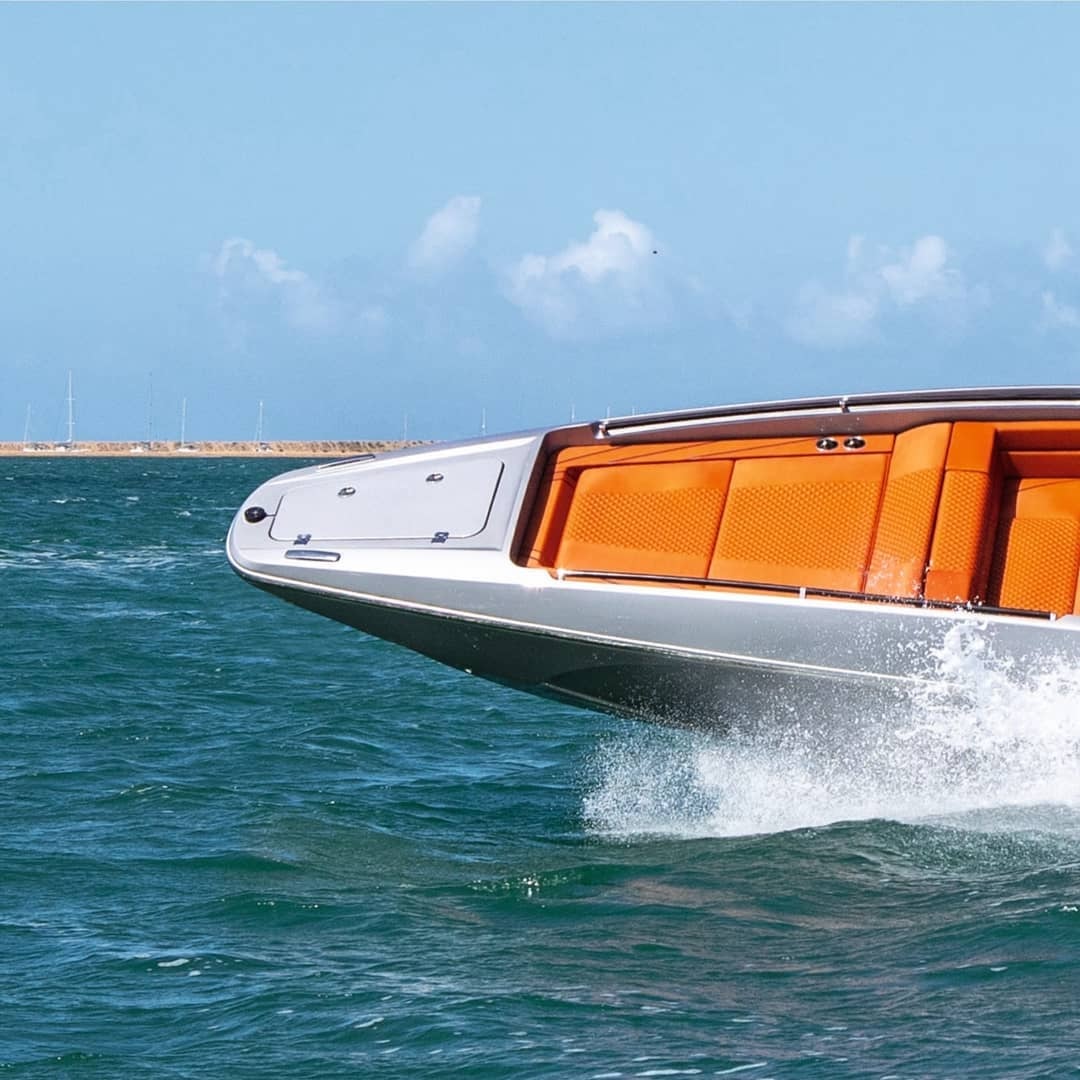 The head compartment positioned below the helm is reached via a high-quality hinged entrance door on the bow of the boat. A stainless steel sink, refrigerator, skylight and the master panel for the CZone DC switching system are contained in the lower quarters.

In the cockpit, three guests and the skipper will crave as much seat (or standing time) as possible when pinned back in the electrically controlled quartet of FB Design Besenzoni shock-absorbing, hydraulic actuator racing bolsters. Formulated for enthralling fast rides and superior high-performance, the hip-hugging seats wrap bodies in place, at the same time removing the bumps from the jumps up and down the sides of the swells. 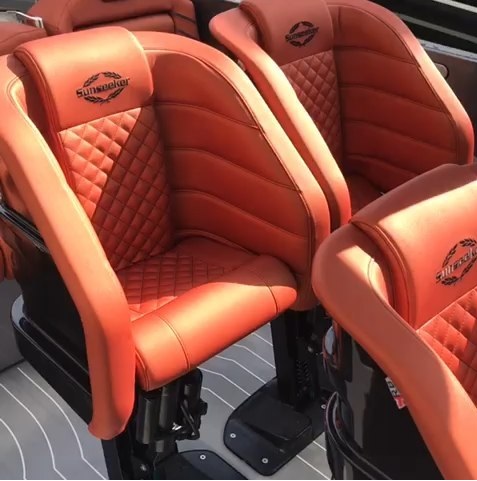 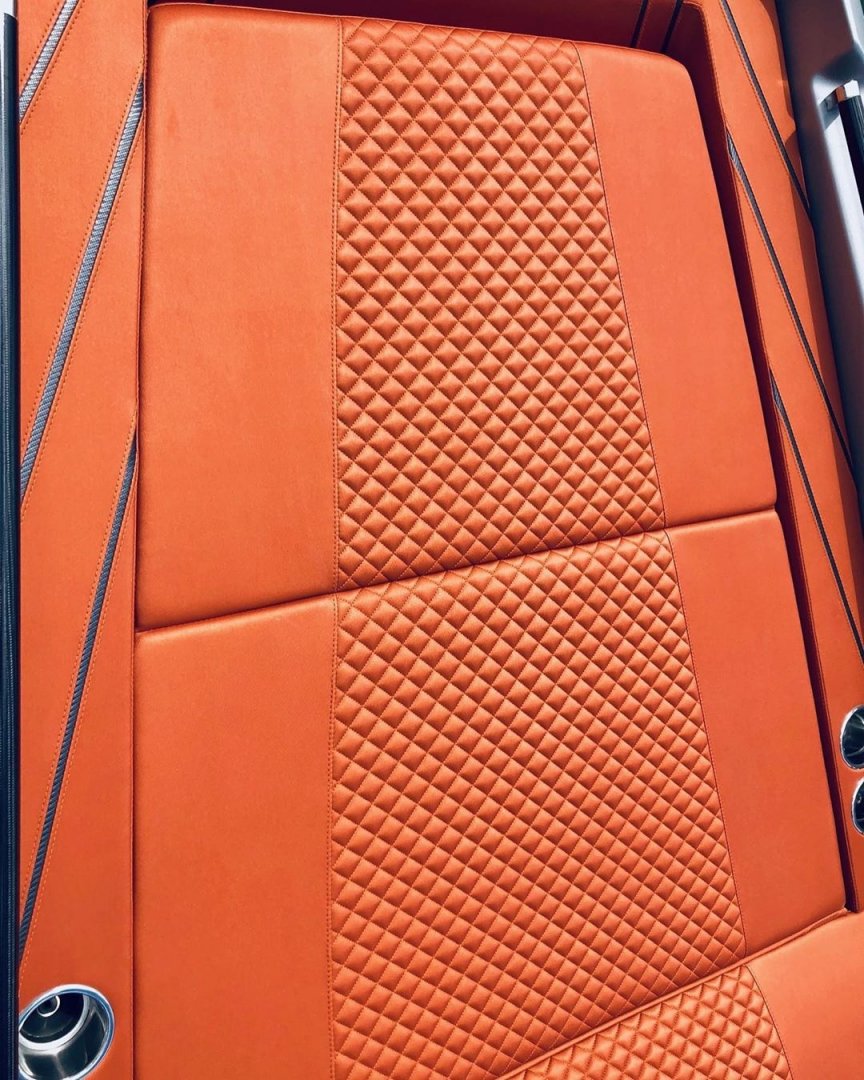 A specially designed double windscreen, crafted with complex curvatures to keep air flow to a minimum was fitted with small vents to act as protectors against salty spray and the whipping winds entering inside the helm. The ducts work to create negative pressure rather directing the elements around the cockpit and not through it -- an essential priority during the elementary building phase. 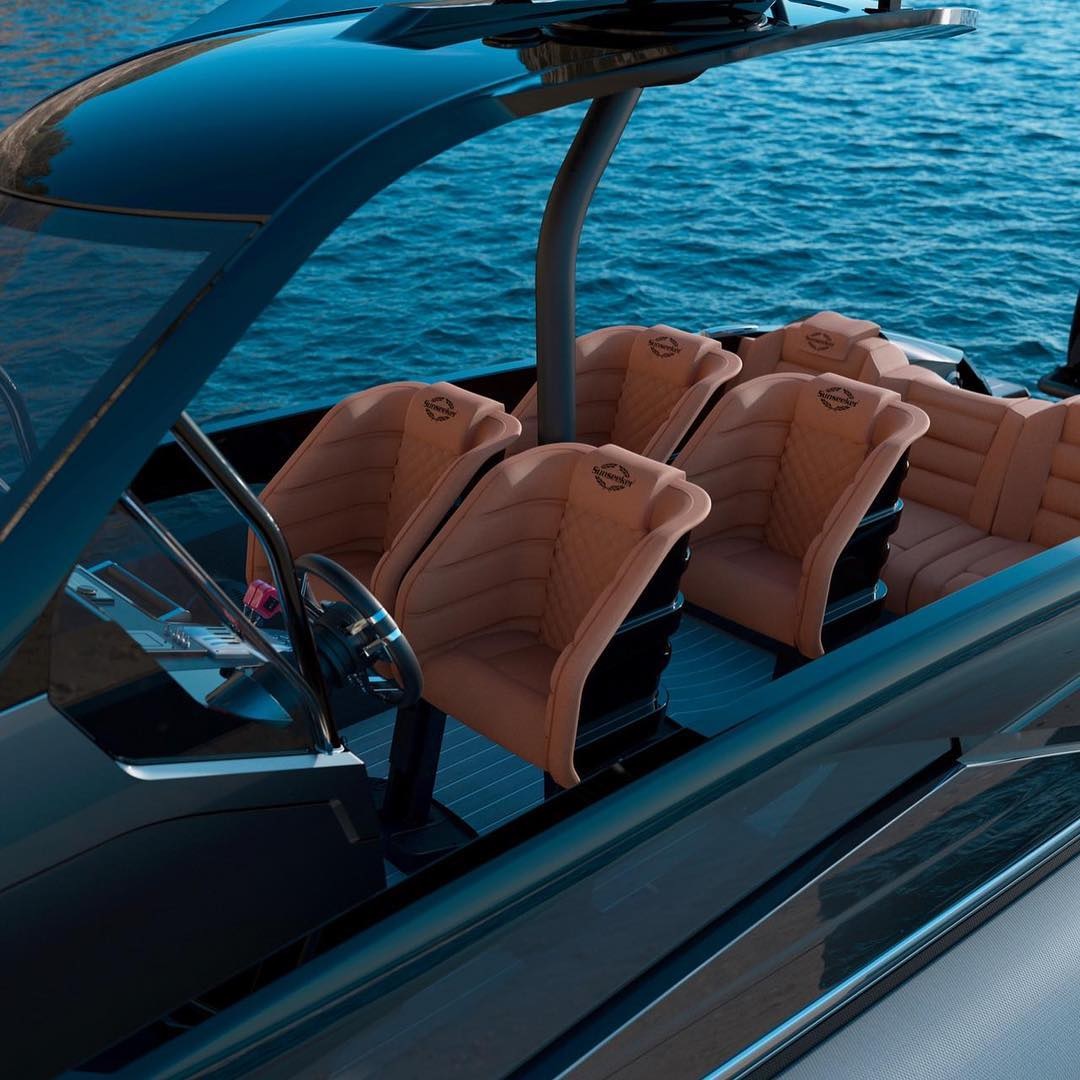 Gazing upwards, a carbon fiber hardtop was built as lightweight as could be to keep the center of gravity low. Moving down a notch to the all glass bridge, on the far left of the dash, a Scanstrut ROKK Wireless Active 12/24V waterproof mount holds any model smartphone down in rough conditions. Uncomplicated in nature, one hand can snap in any size apparatus with the case on or off. Two additional waterproof USB sockets were added in the cockpit because there is always another boater in need of more battery life.

Of the two Simrad 16-inch EVO displays, the starboard monitor gives access to the stimulating Lumishore Lumi- Link lighting system. The touchscreen smart lighting program is the must-have party accessory that lets you control the color palette and effects right down to strobe and cycle modes. The color wheel changes with the beat of the music, and can also be coordinated to match the shade of the boat's upholstery. Really, could you ask for anything more? 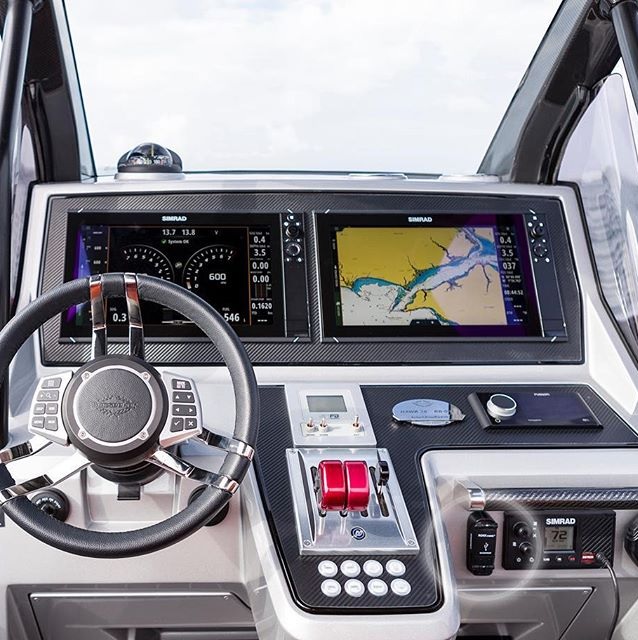 Color coordination aside, crucial to controlling the boat are the Mercury Racing Digital Zero Effort throttles and the intelligent power-assisted tilt steering wheel trimmed in leather which makes full use of the navigation system. 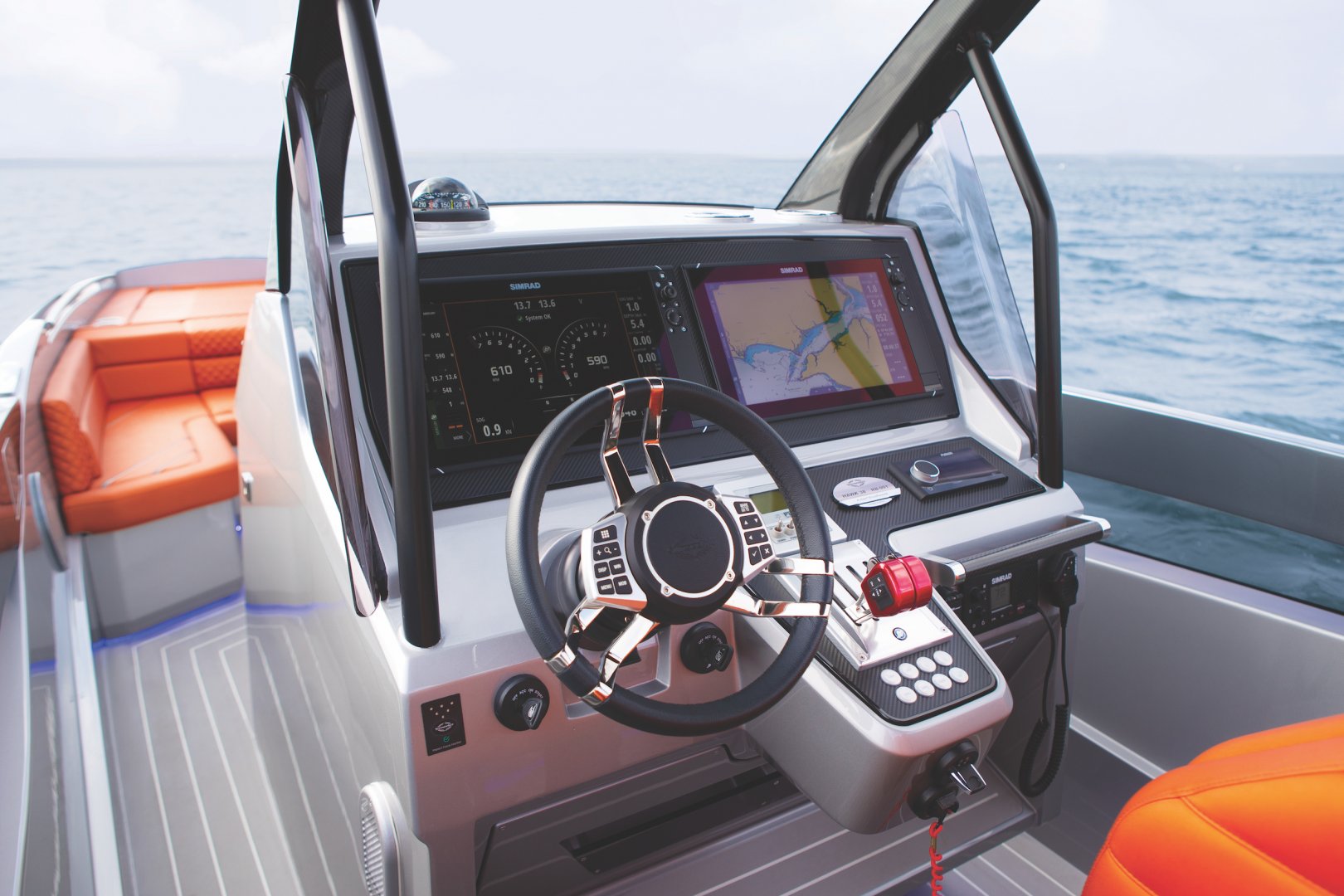 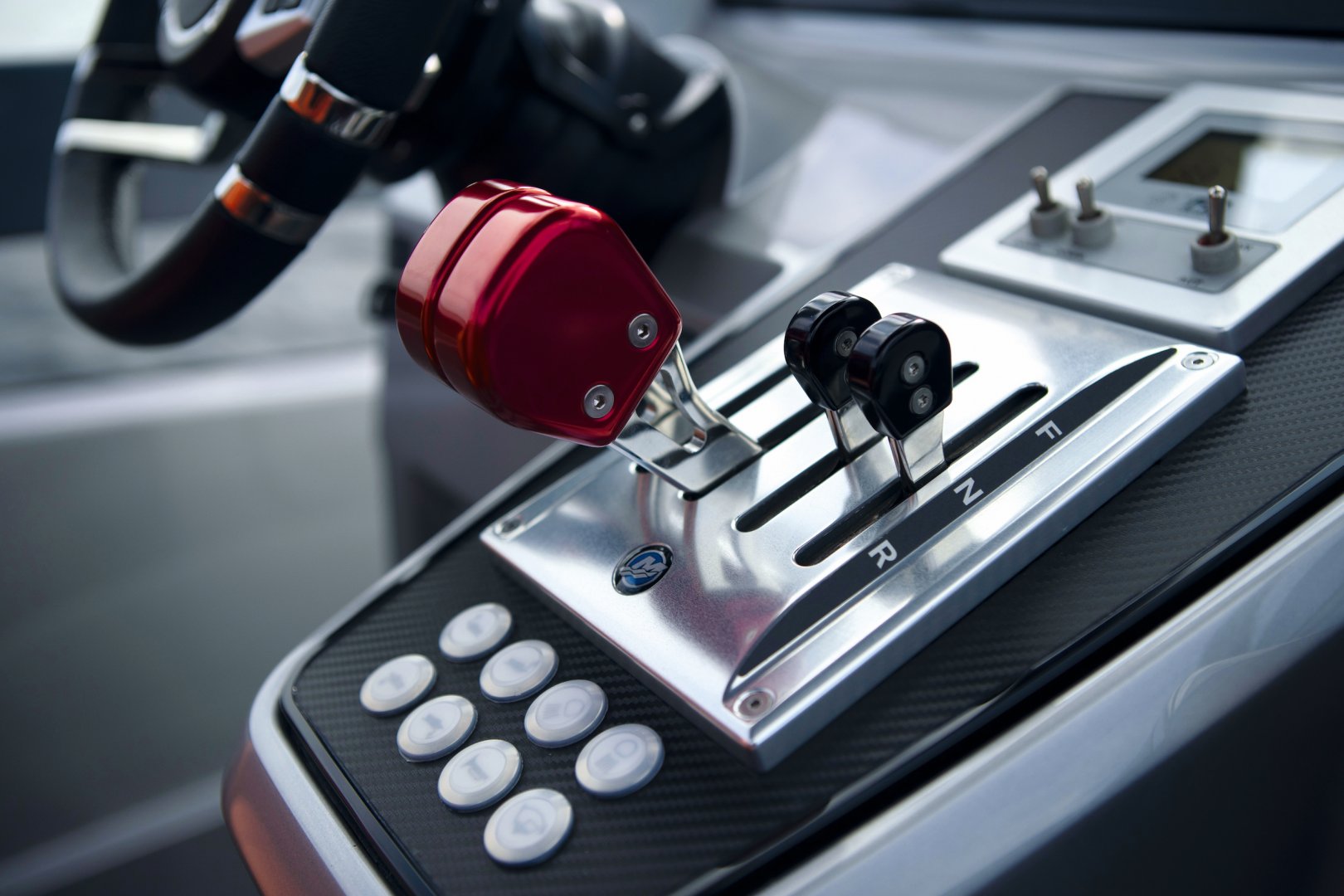 To the rear, the triple bench allows for the middle seat to fold inwards to the left for easy entry and exit, and below the seat it is possible to add a two drawer fridge. Stepping onto the transom, a custom sound system with polished stainless-steel speaker grills has been integrated into the aft floor taking swimming sessions to a new sound level.

As well, a special LED indicator was placed on the lower port side to inform wading bathers, the outboards are powered up. A flashing signal indicates the engines are in neutral, and when props are spinning, the gear light remains a solid color. A transom shower and boarding steps that come out and drop in the water come as standard (or a longer carbon fiber ladder is another option) to complete any afternoon out on the aft. 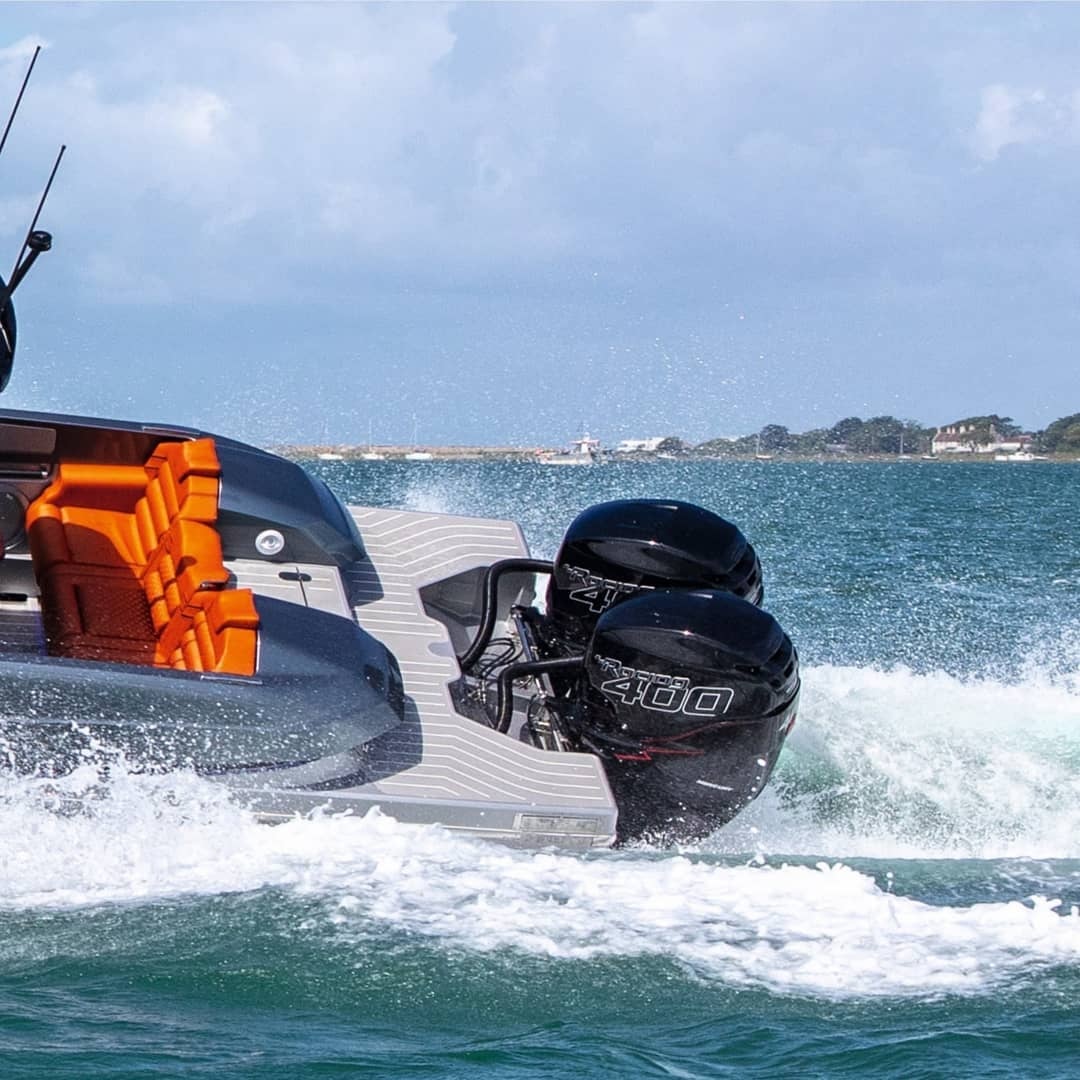 In closing, no Sunseeker story could be complete without discussing digits. Following finishing touches to the Hawk 38 that took place back in the United Kingdom at Supermarine Powerboat, the water warrior again took flight back to Italy for its Lake Como sea trials, by none other than Fabio Buzzi.

Stable and able, and built to perform over pacify its passengers, best describe the initial trials. Planing out was noted near 23 mph (20 knots), before laying into the throttles brought the beast up to a formidable 70 mph (62 knots) at WOT. 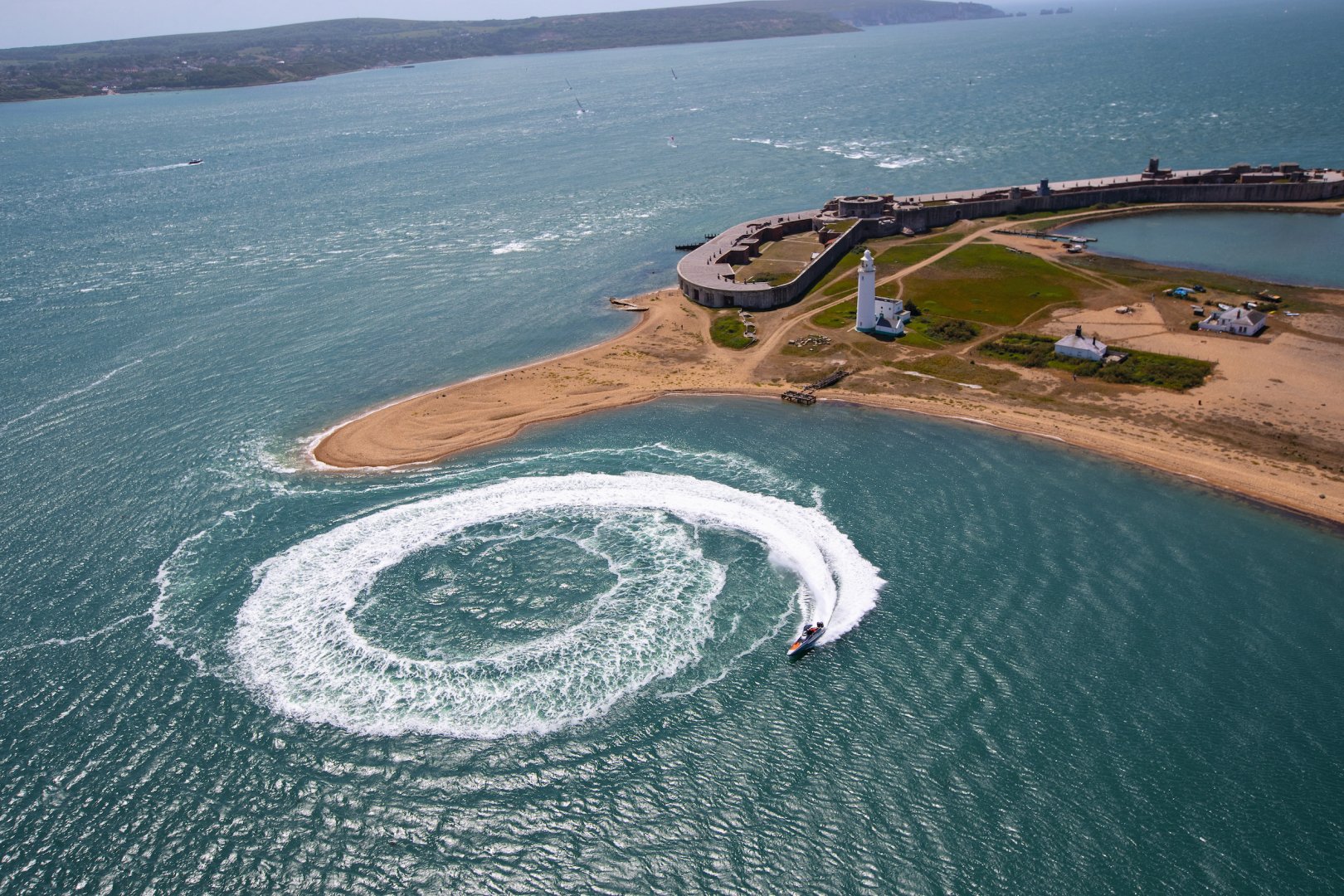 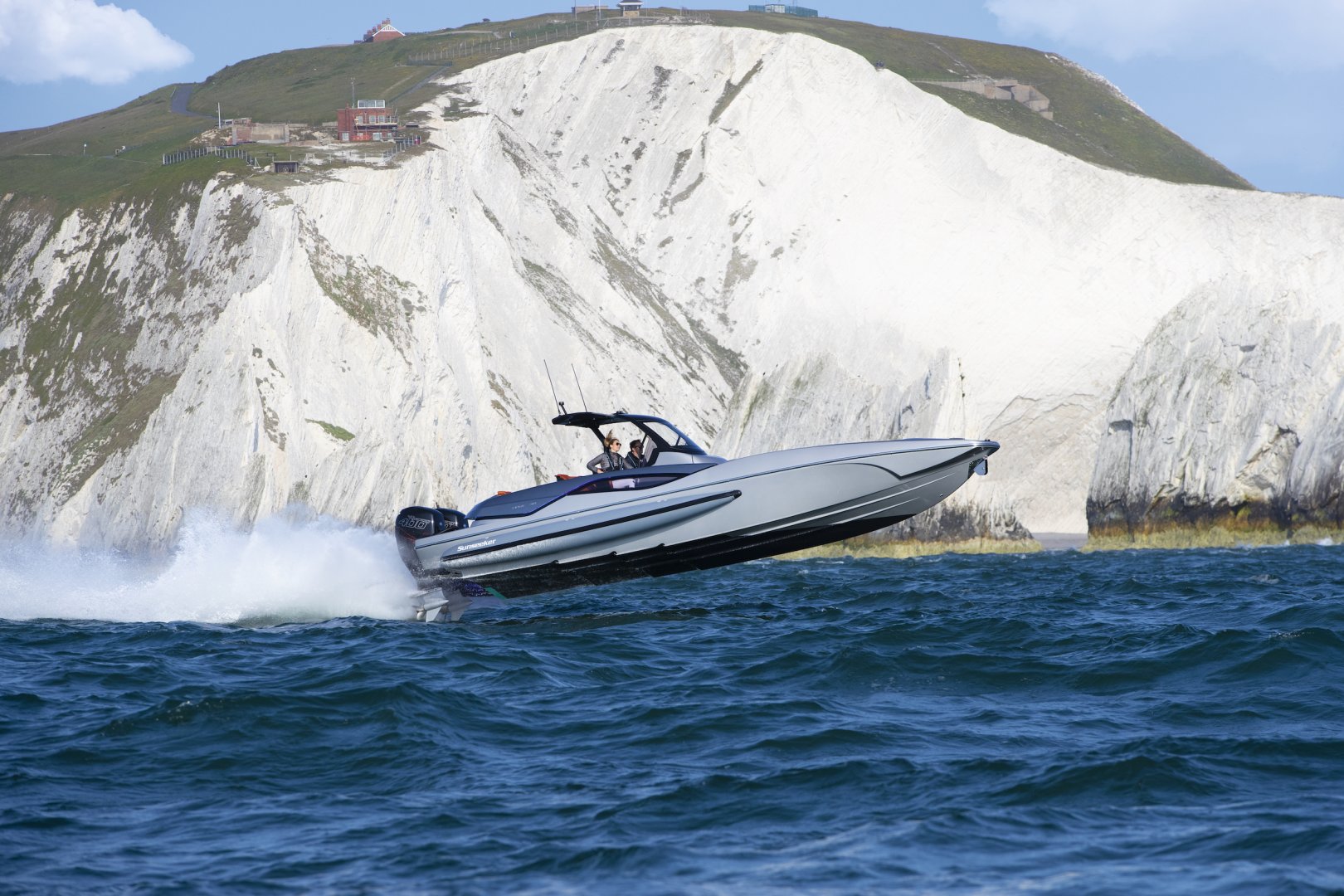 The first ten Sunseeker Hawk 38 hulls will be limited edition models, and each classy console will feature an oval-shaped plaque to the right side of the dash dedicated to Robert Braithwaite, the performance-minded creator of Sunseeker who passed away this year. 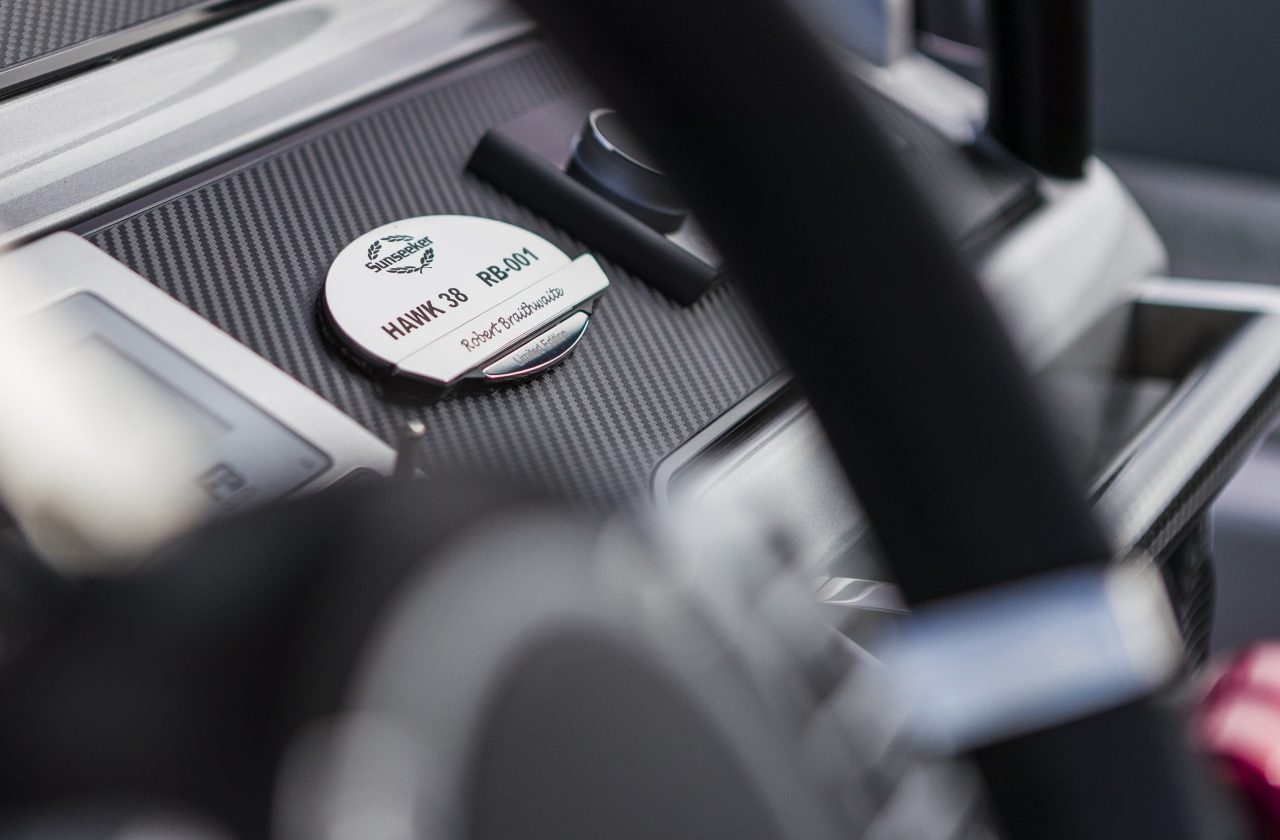 For any seafaring souls who were not previously aware Sunseeker International joined the high-end center console market, we here at Luxurycenterconsoles.com strongly urge you to add the Hawk 38 brainchild to the line-up when considering your next offshore rocket. Jettee 101 at the Cannes (France) Yachting Festival taking place from the 10th to the 15th of September is when the Hawk 38 makes her maiden debut along with eight other stunning Sunseeker sisterships. 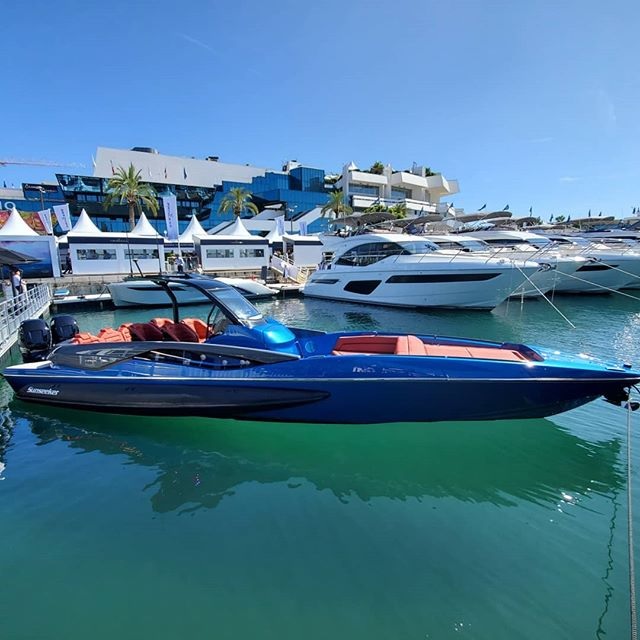 While you won't get the routine US designed creature comforts and a billion outboards on the transom, YOU WILL GET a piece of Fabio Buzzi DNA in a self-righting unstuffable, unsinkable, rubber-sided Sunseeker speedster. What's not to LOVE?
Reactions: Lars_The_Swedish_Viking, alohajeff and HB2LHC